Mount Vetten stands at 467m and is one of the most popular hikes in Vesterålen so we were keen to check it out. Unfortunately when we went up we had pretty shit weather with clouds engulfing us, so it was hard to envision what the ‘magnificent view’ actually looked like. Occasionally a patch would open up to reveal the sea and islands below us but for the most part it was very gloomy. We arrived at the first hut and signed our names in the book. It was funny seeing how competitive the locals were as they tallied up how many times they’ve climbed up. I don’t know if there’s a prize for the most summits but a few people had been up over 1000 times and some did the trip twice in one day! 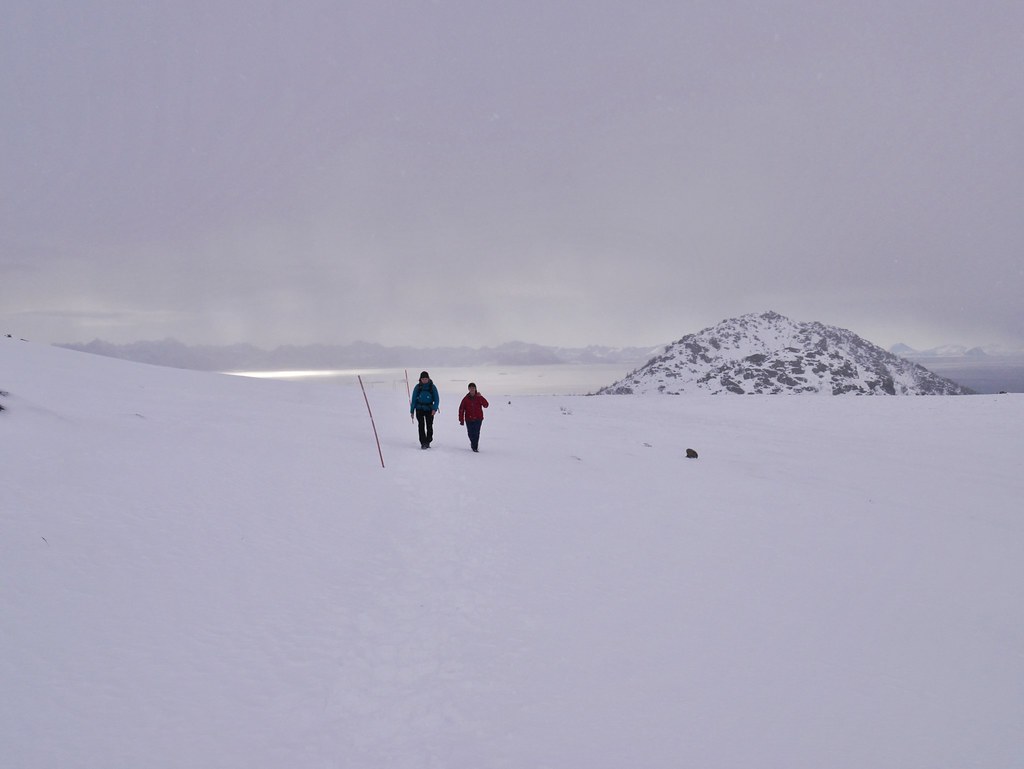 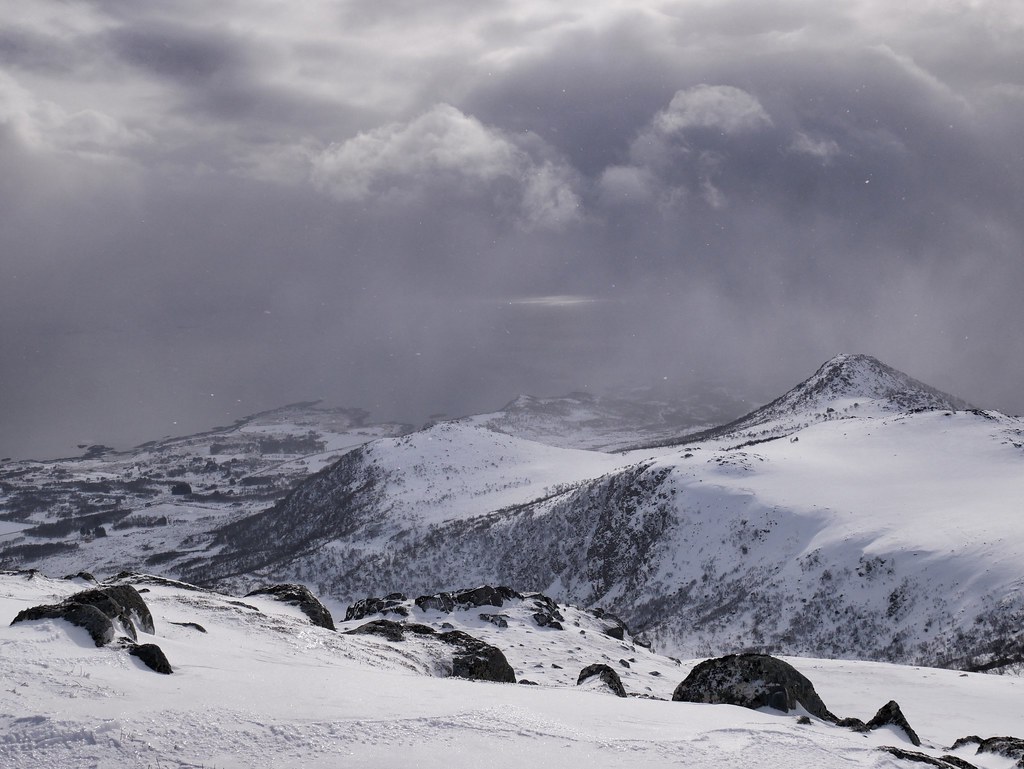 We walked through slippery snow along a plateau, trying to follow the previous footsteps to avoid sinking down. Then we had a short, steep climb up to the top. It was a very straightforward hike, only taking a couple of hours and we arrived at another hut beside the summit. We were pretty hot and sweaty from the hike but the icy wind soon reminded us to stay warm. Craig wanted to explore more and see if the ridge-line was accessible so while he did that a few of us took refuge in the hut. We lit a couple of candles and began taking our layers off to let our bodies breath. As we sat there rubbing our hands together and pointlessly holding them over the candles, we realised our bodies were all steaming from our hot bodies meeting the cold air! We looked like a group of witches huddled around the table. We played some cards until the lads returned from their detour, defeated by the deep snow and precarious cornices (large overhanging slabs of snow and ice). 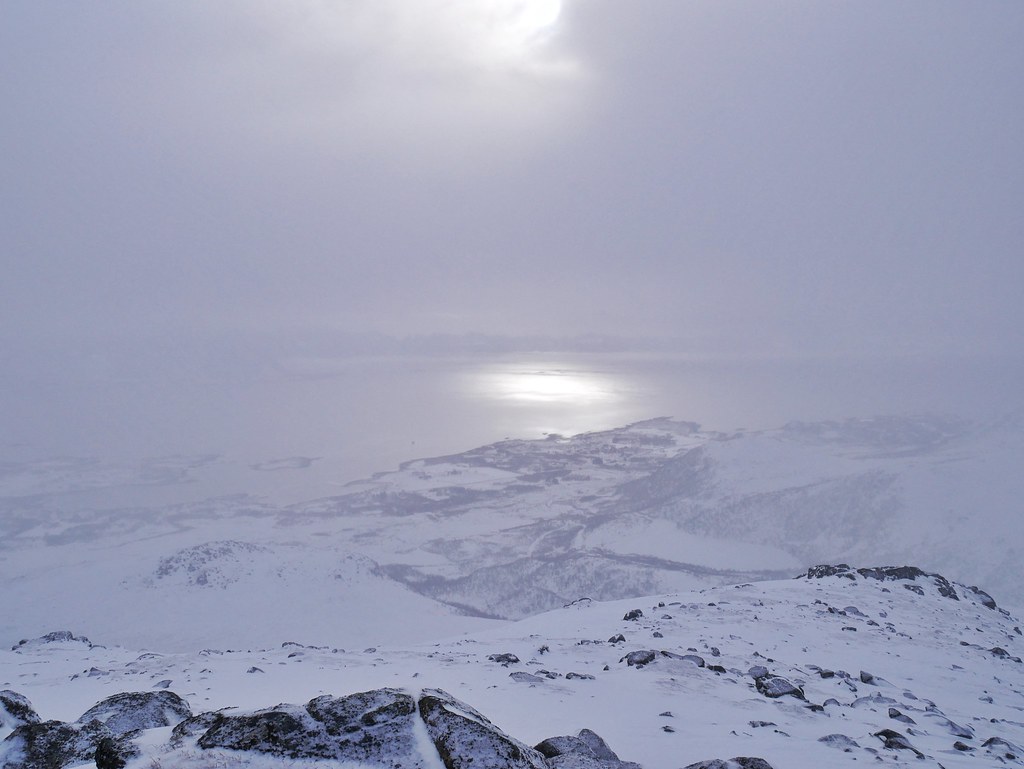 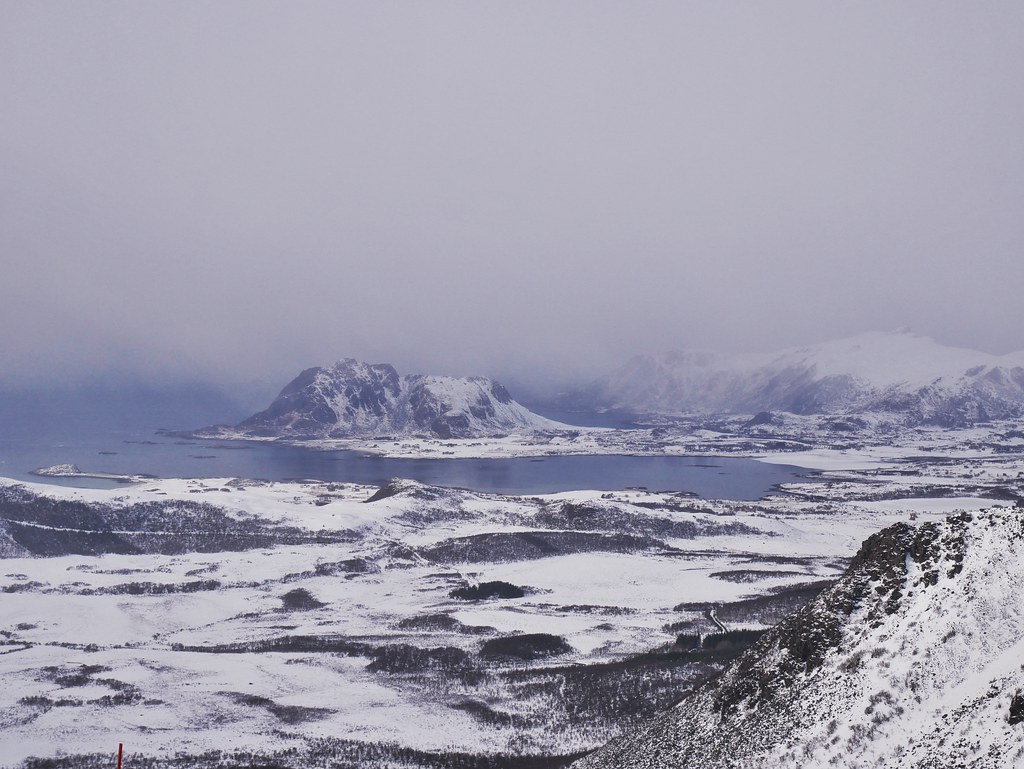 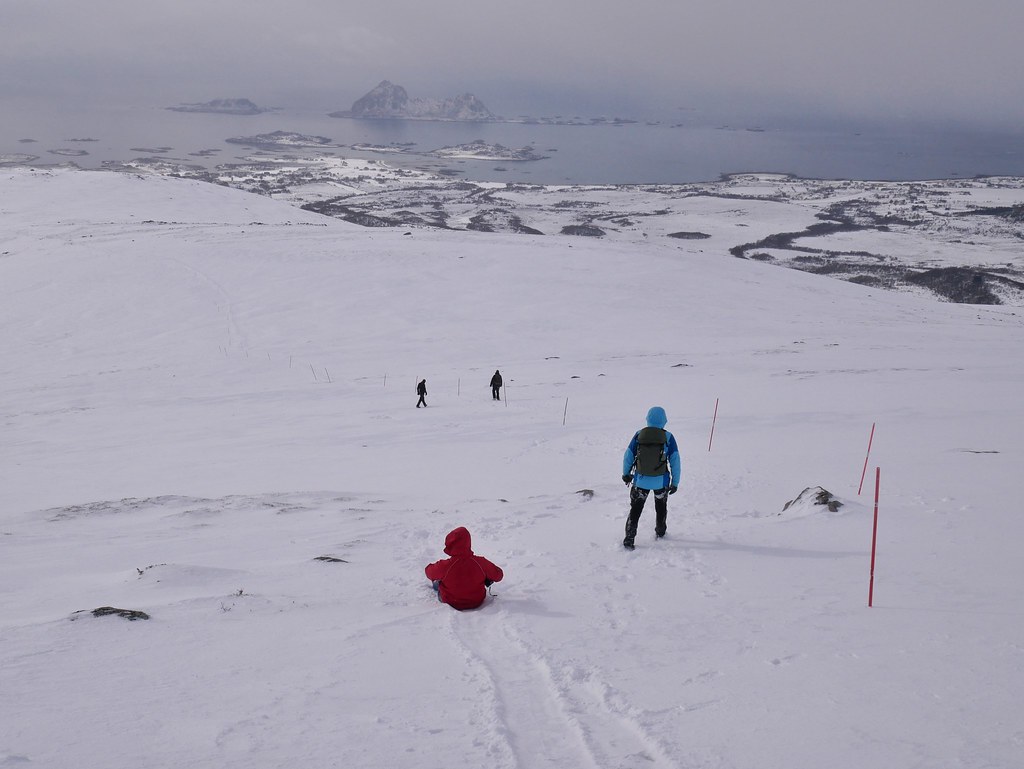 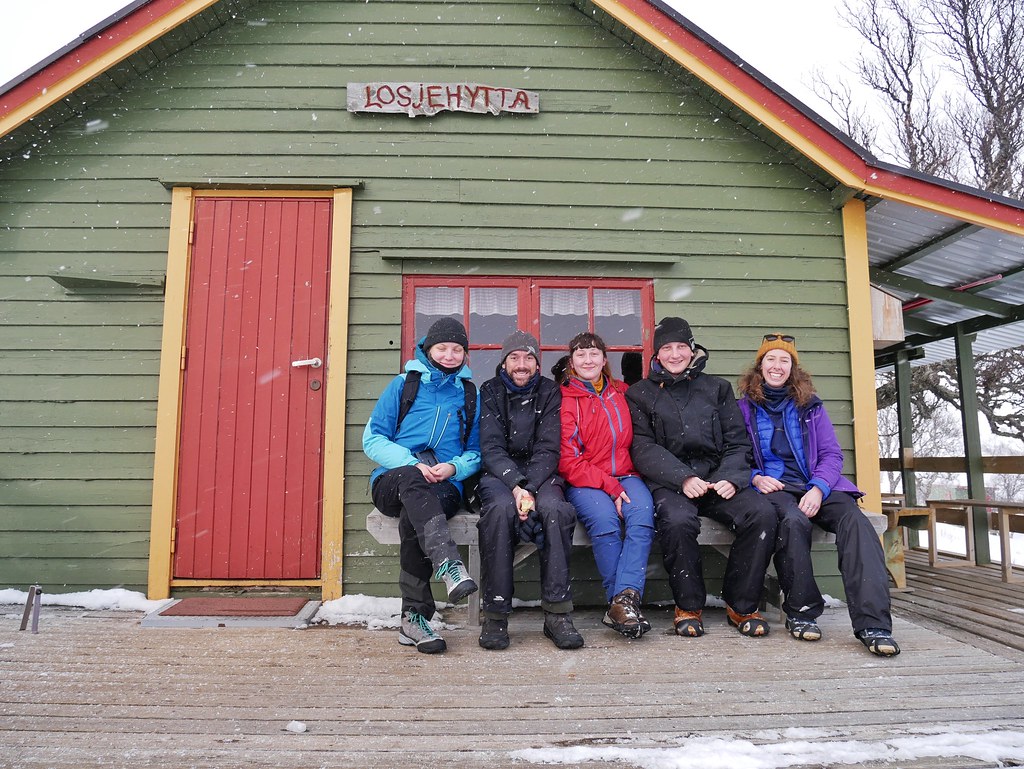 We barely got any views all day and Vetten hadn’t been fully crossed off our list so a few weeks later we headed up again. This time we had amazing conditions with blue skies and much warmer temperatures (slightly above zero!). It was also alot easier hiking without so many layers of clothes on, the locals call it dressing like an onion! 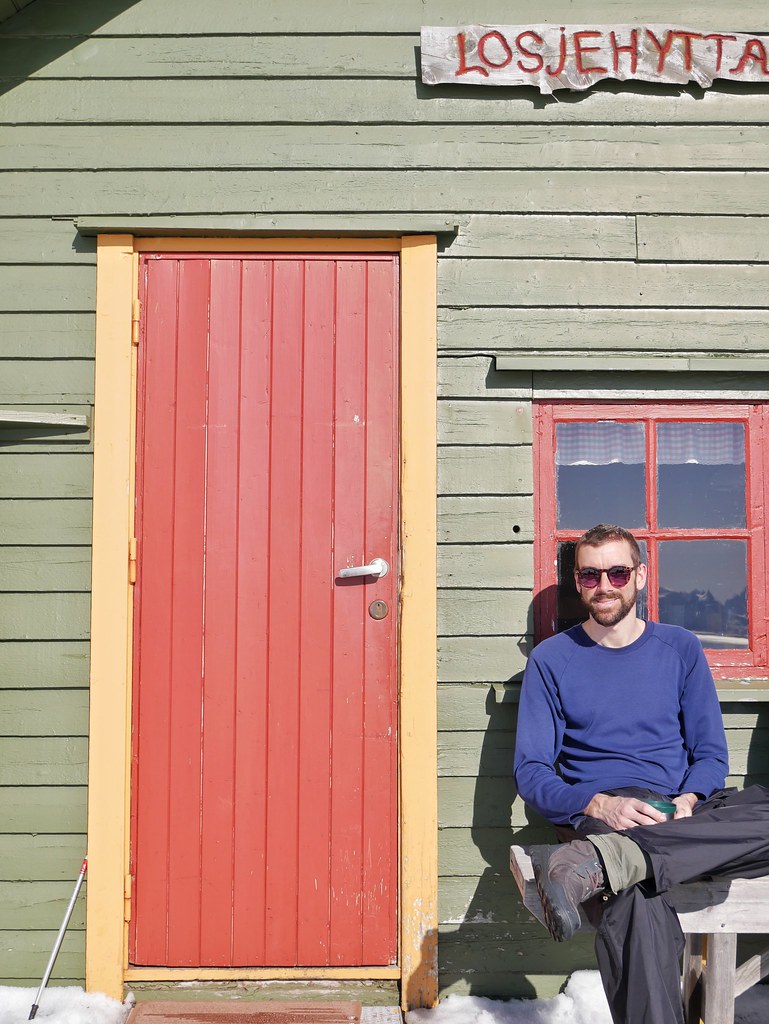 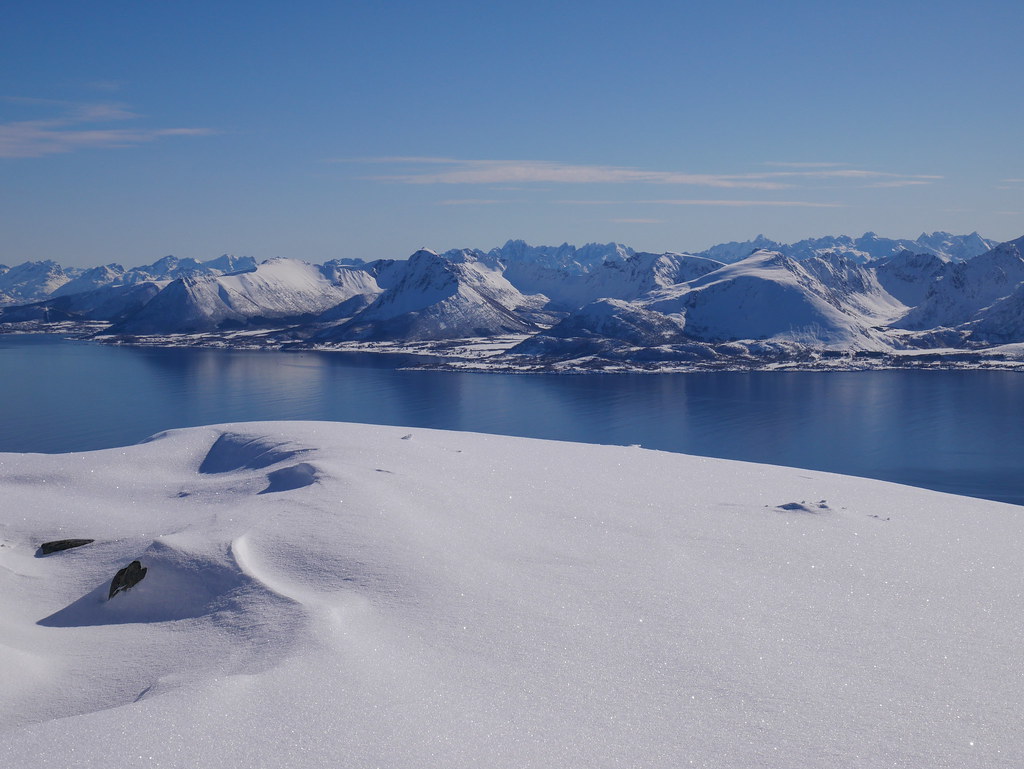 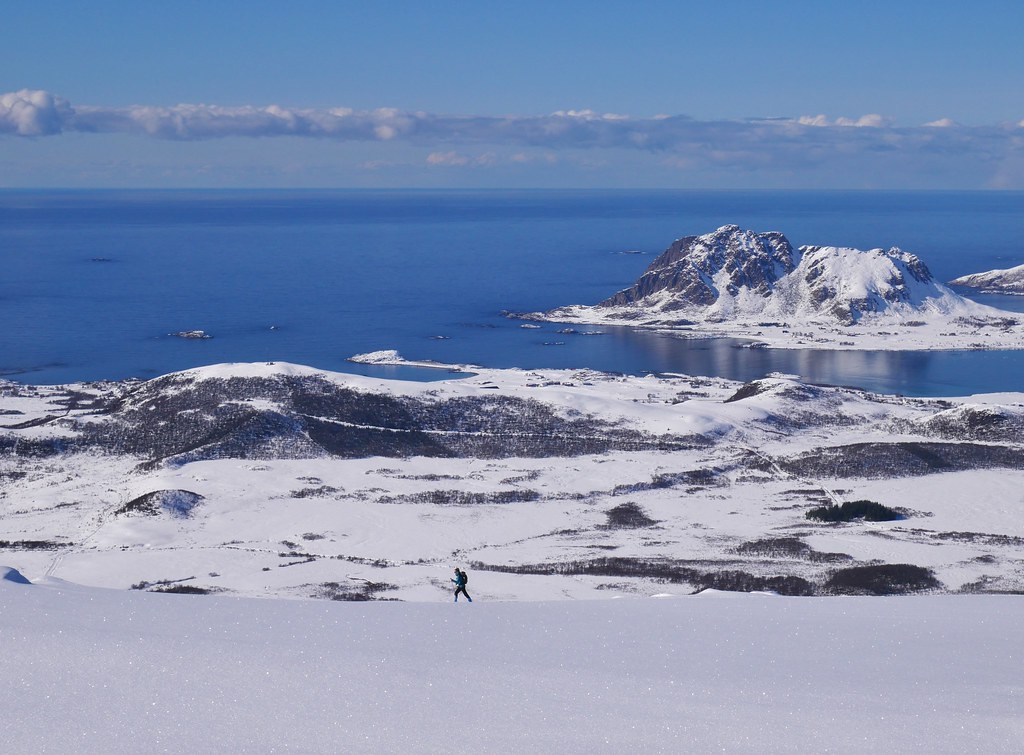 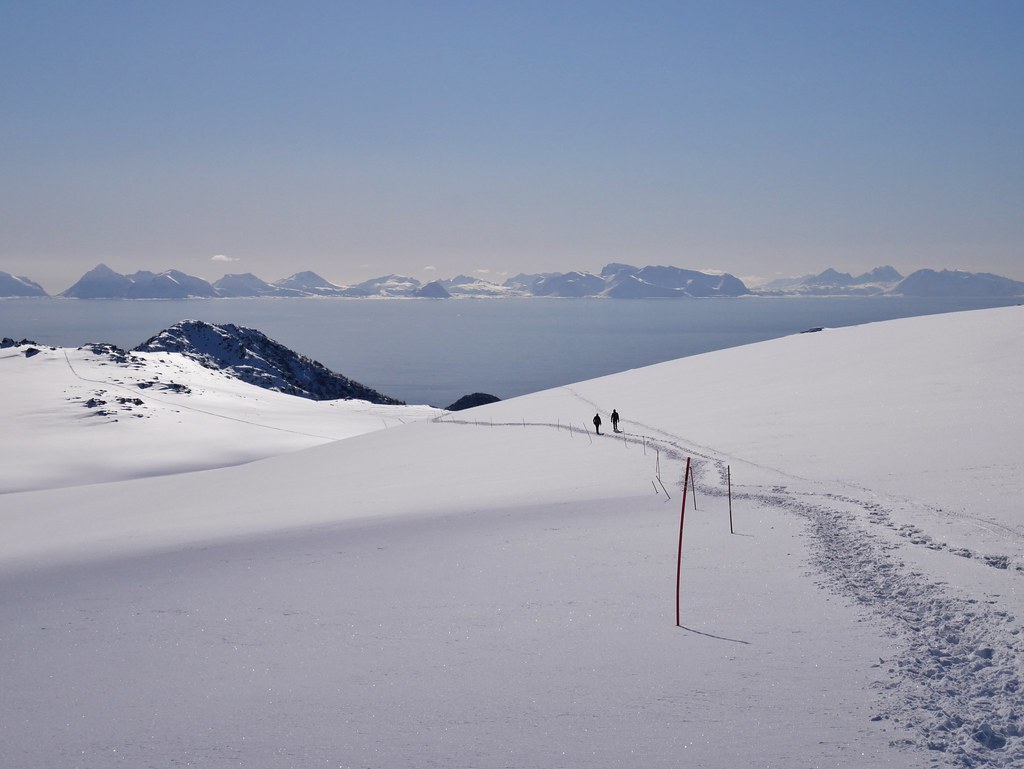 We reached the summit and instead of hiding inside the hut, we sat on a boulder in the beautiful sunshine. The view was incredible! The fjord was right below us with huge snow capped peaks lining the edges and continuing to pile up behind one another into the distance. Along the side of the fjord were scatterings of little islands and we could see the tiny village where we live. We soaked in the 360 degree views before deciding to retry the ridge-line hike. No one else had attempted this section so we made fresh prints in the snow heading down to a bowl shaped area in the mountain. After only a short while we started to lose our grip as 1 foot beneath the snow was a layer of very slippery ice. It was impossible to walk through, even with studs on our shoes, so we had to call it a day and face the fact that the ridge wasn’t possible until after we leave this part of Norway. We reached the first hut quickly thanks to sliding on our bums down the steep slope. Some locals were Nordic skiing down the mountain and we saw there were some skis in the hut so of course a few people wanted to have a try. I’m like Bambi on ice so I gave it a miss but Craig tried and it was hilarious. He had his baggy waterproof pants on and a little jacket so he looked like a model from a vintage ski postcard. He’s never been skiing before, let alone Nordic skiing where you basically only go in a straight line so it was bloody hilarious watching him going down a small snowy hill looking very awkward and uncomfortable until his body completely collapsed sideways into a pile of snow and we all roared with laughter. 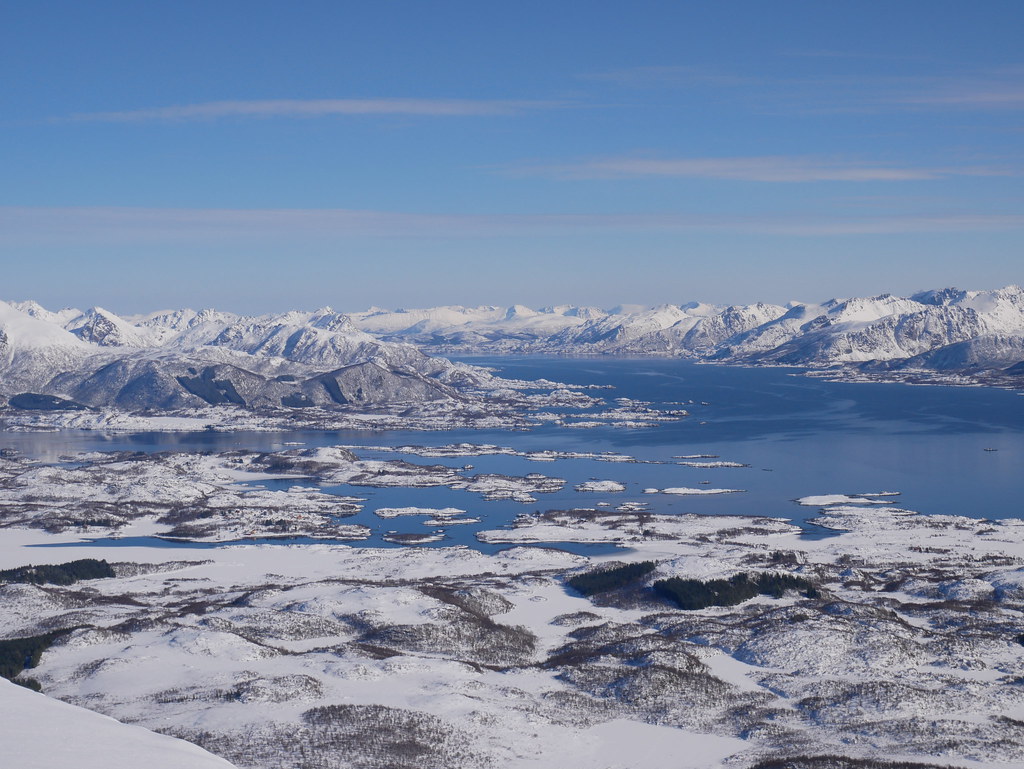 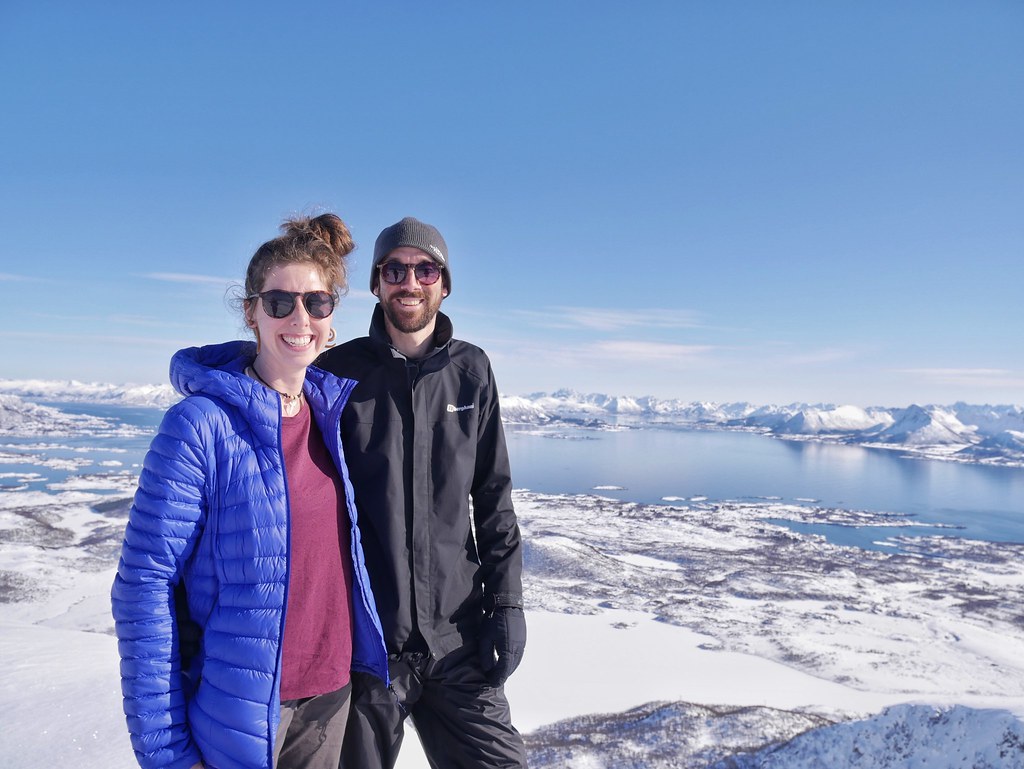 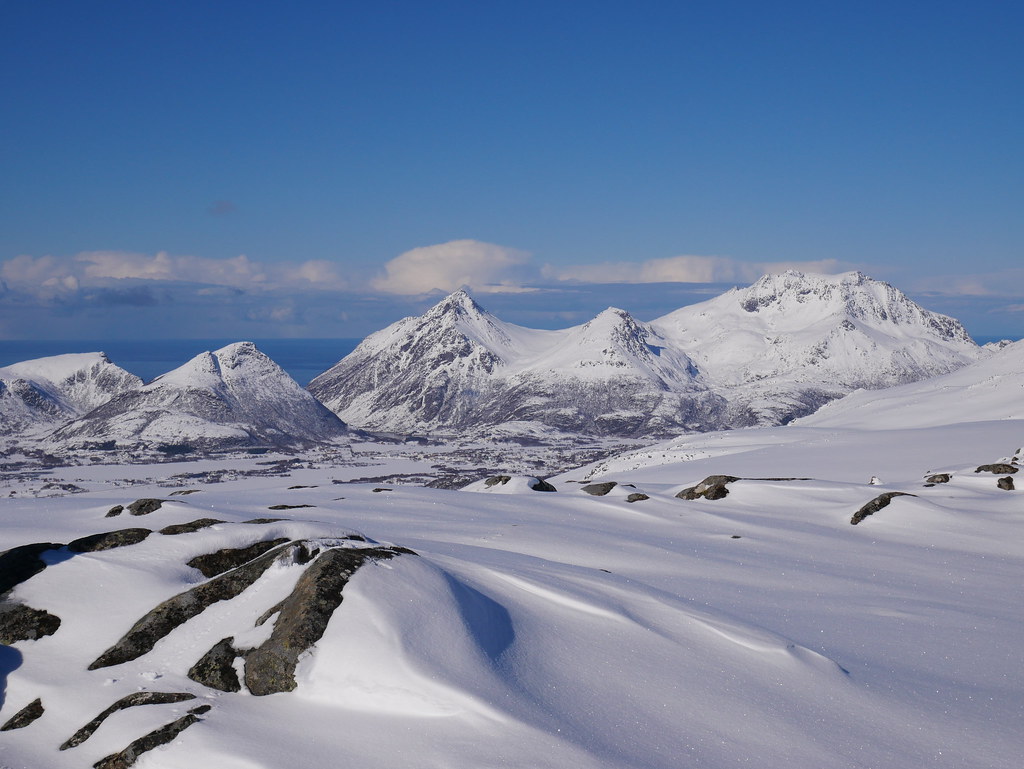 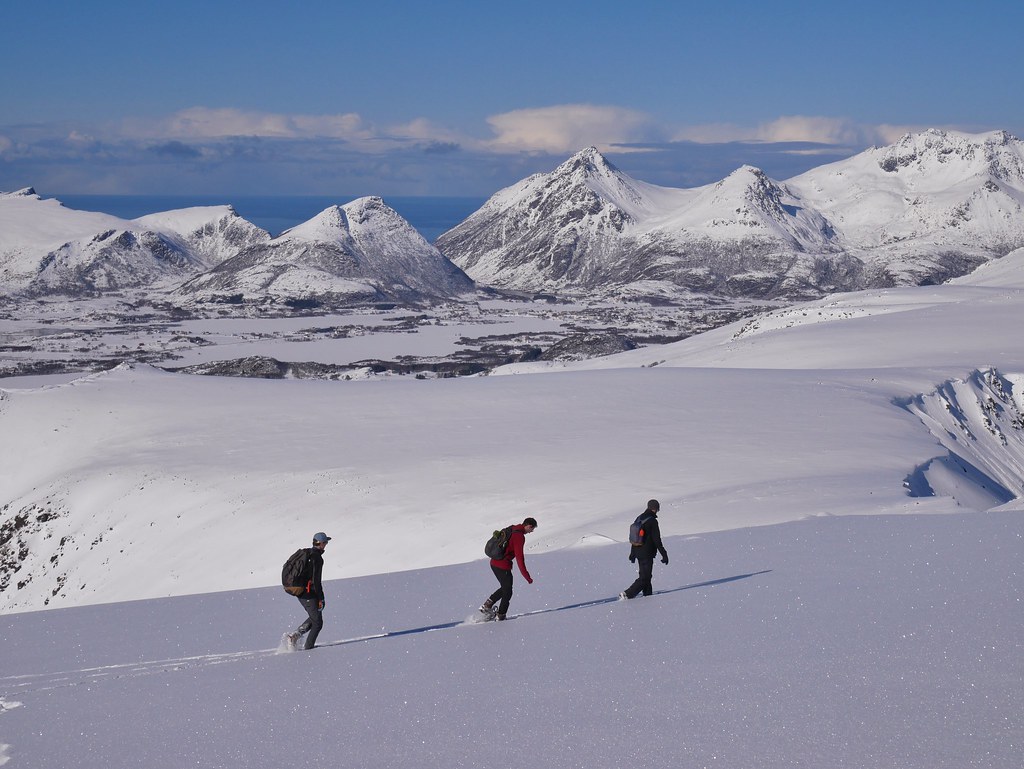 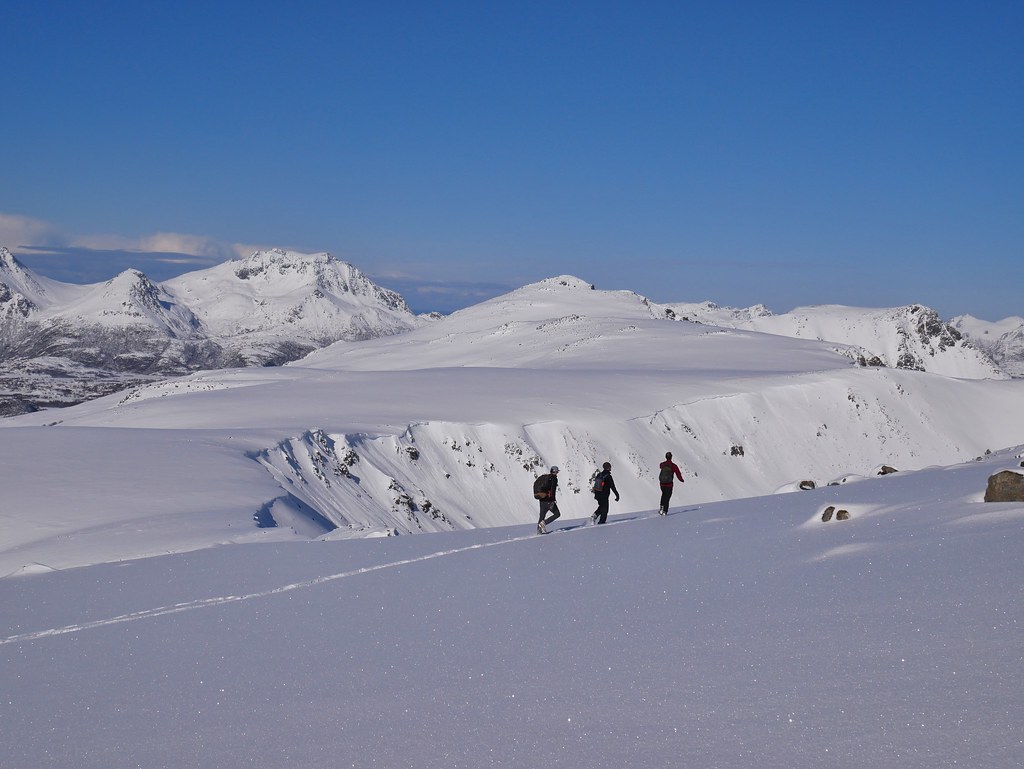