The weather has been below zero for a few weeks now and the effects can really be seen along the bay near our house. There’s a large section which is now totally frozen with thick slabs of ice. As the water comes in at high tide, it pushes the ice up so these amazing sculptures are formed around the rocks as shards split and rise up. Some days it’s so cold that a thick frost covers everything and it’s so satisfying to walk on. I actually told Craig the crunch of us stepping on the frost sounded like me eating (I eat really loudly) and Craig cracked up, it was uncanny.

Today we were heading out to the lakes above our village. There’s sort of three layers to this area, sea level with the village, above that is a plateau with four lakes, and finally there’s the mountains.

We found the path leading up to the lakes, and from then on we just followed a set of footprints in the snow. They were old prints and only seemed to go one direction which meant A) the person came back a different route, or B) when the footprints end we’re going to find a frozen corpse.

It didn’t take long to reach some giant boulders which offered a great view down to the islands and village. The trail then moved into the forest, where the snow hadn’t reached and bright green moss was thriving. Some streams moved fast while others were almost frozen solid with just a trickle squeezing beneath the ice layer.

We made it to the plateau which was covered in a blanket of old, hard snow which made for exhausting walking, especially with all our layers on. The footprints had long gone by this point, they just vanished, no body and no return journey, so we had to choose a direction. I picked right, and after walking quite a chunk we still hadn’t reached a lake, so I suggested to Craig we continue onto a funny looking tree in the distance. I walked ahead of him and then I spotted the lake!! Craig wasn’t so sure though, in fact he confidently said I was going crazy and it was the sea. So I trudged on, determined to prove I was right, and of course I was and I shouted through the forest “ITS THE LAKE, I TOLD YOU IT WASN’T THE BLOODY SEA”. Craig says I need to take shares out in humble pie…it’s not my fault I’m always right. 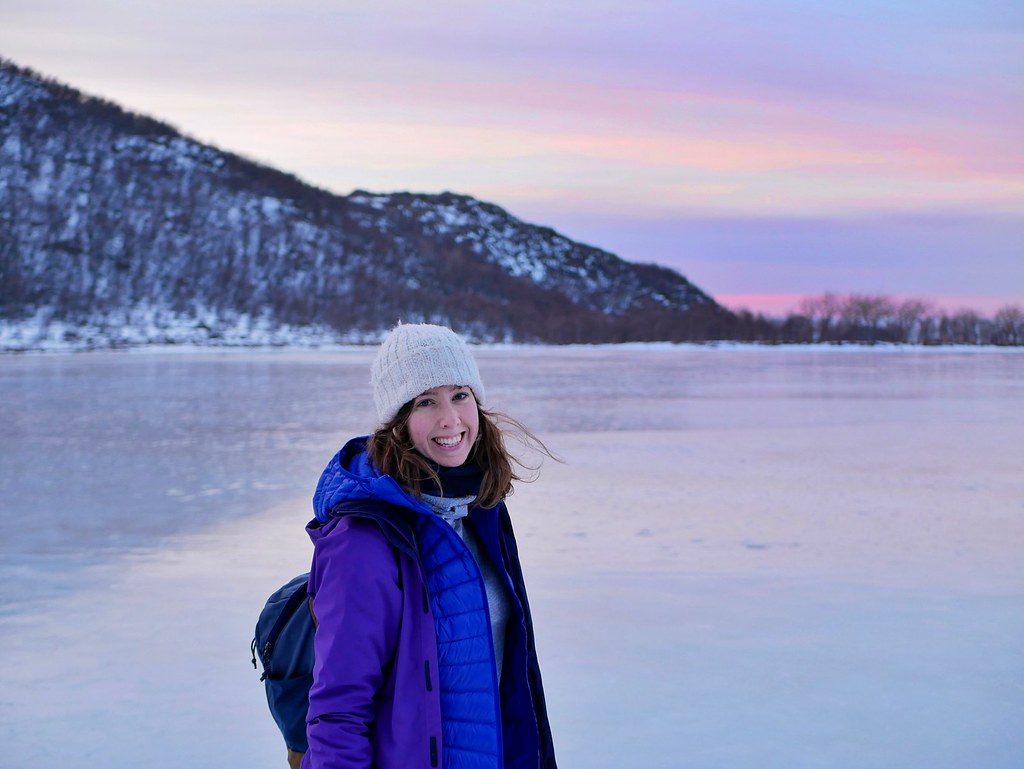 The lake was completely frozen, with some gentle mountains one side and forest around the rest. It was a hazy day but the sunrise was giving the clouds a pale pink hue. We have a tradition when we get to a frozen lake, where we find a slab of ice and throw it on the lake. It makes the most amazing tinkling sound that seems to last forever. 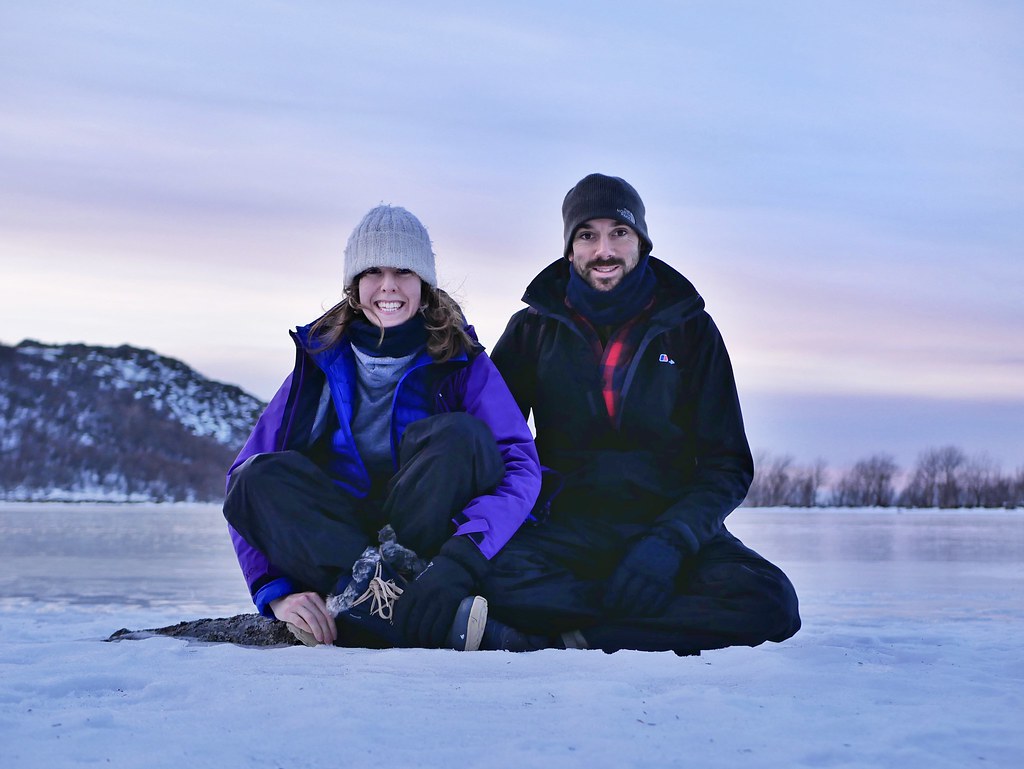 Craig wanted to hike to all of the lakes so we turned back and followed a straight line until we arrived at the next lake. This one was almost encircled by mountains and much more impressive. Although I do think lakes look so much better when their not frozen…they sort of just look like a frozen field as oppose to an inviting azure coloured pool. 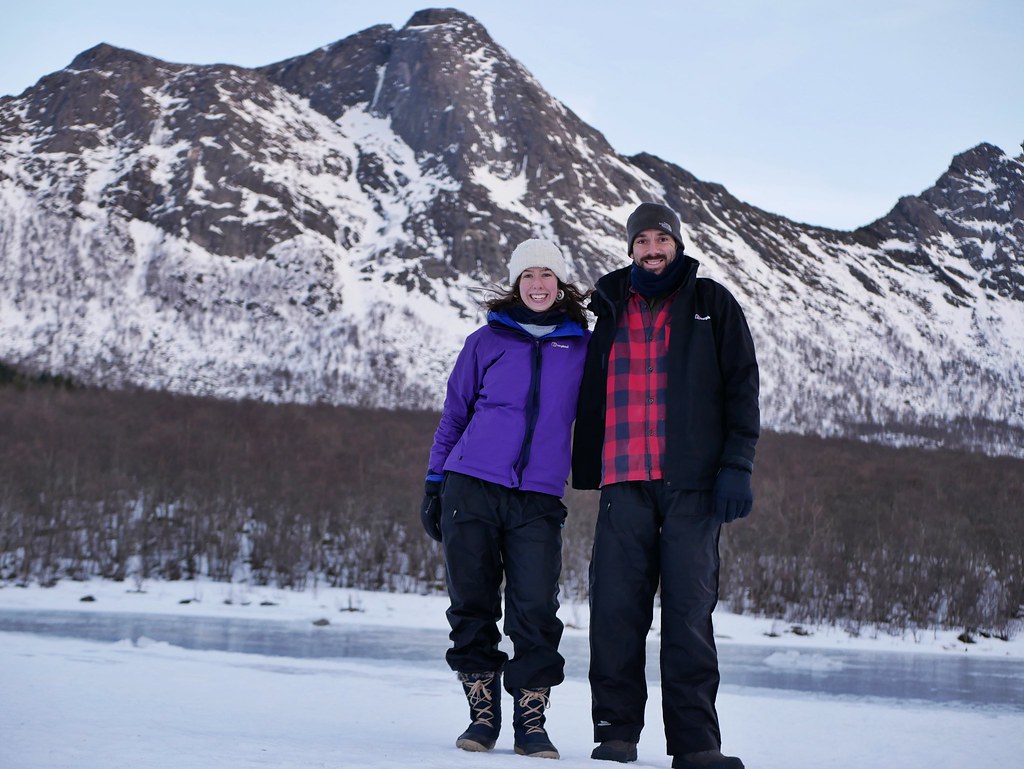 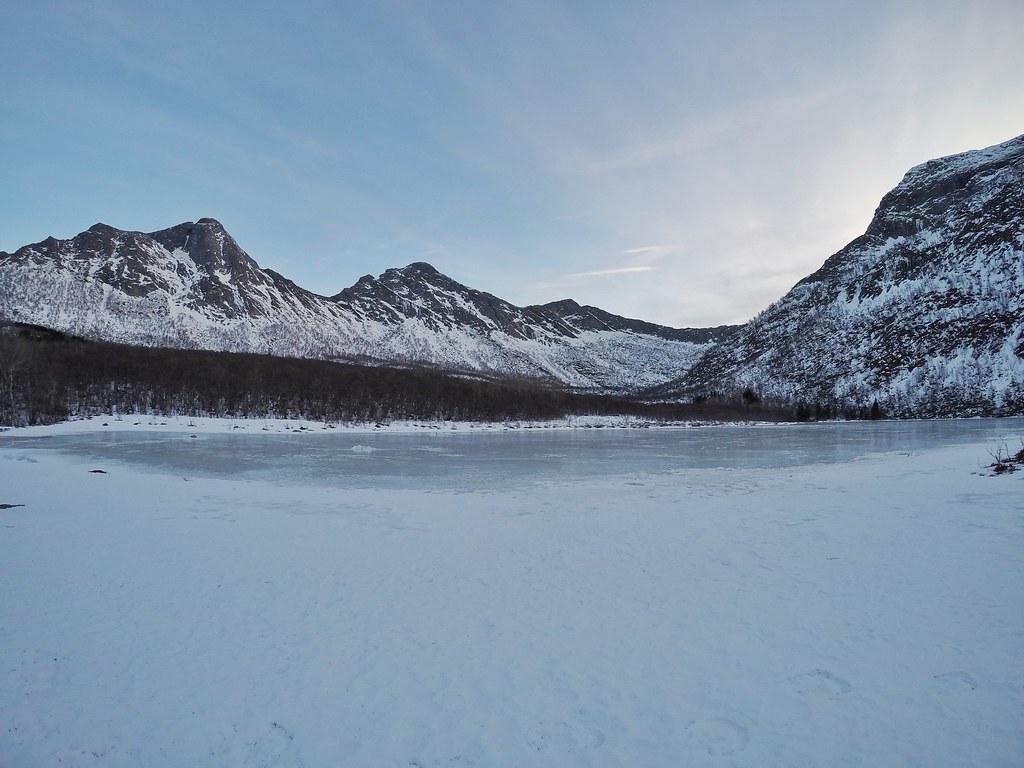 Everytime I took my gloves off to take a photo my hand would throb from the cold. It was unbearable, especiallly with the wind chill which apparently gave it a real feel of -12 degrees. My nose was constantly dripping and then a gust of wind would hit me in the face and I’d feel my snot getting pushed along my cheeks. 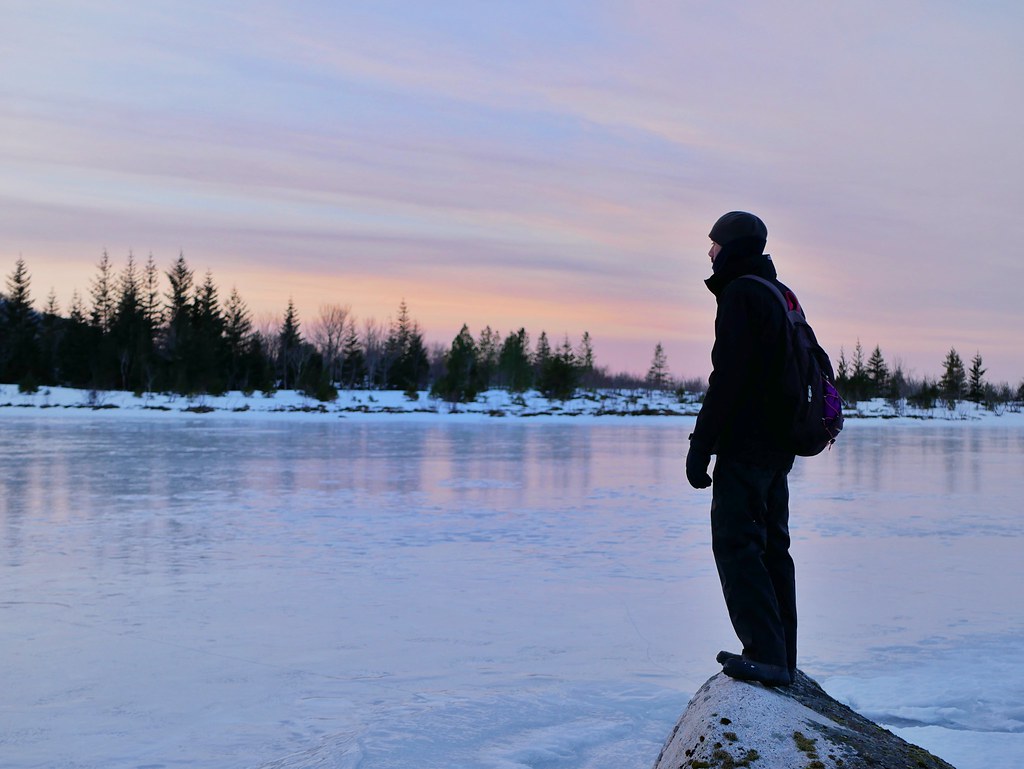 I didn’t enjoy the walk to the third lake. We had to navigate our way through an area filled with tiny trees which all looked the same. Occasionally I’d step too close to a rock or tree root and my foot would sink down 2ft into a snow-well. I looked around at one point and questioned what we were doing hiking a totally unknown route in such cold weather, and with so few hours of daylight. Every tree looked exactly the same and I was almost invisioning myself returning here with a film crew “this is where I realised we were lost and the battle to survive began – over there is where Craig fell and broke his leg, and this is the rock we lived under for 92 days”. But we did make it to the much smaller third lake, and in the distance was the fourth one. We decided to not walk to that one and just waved at it with our frostbitten hands. 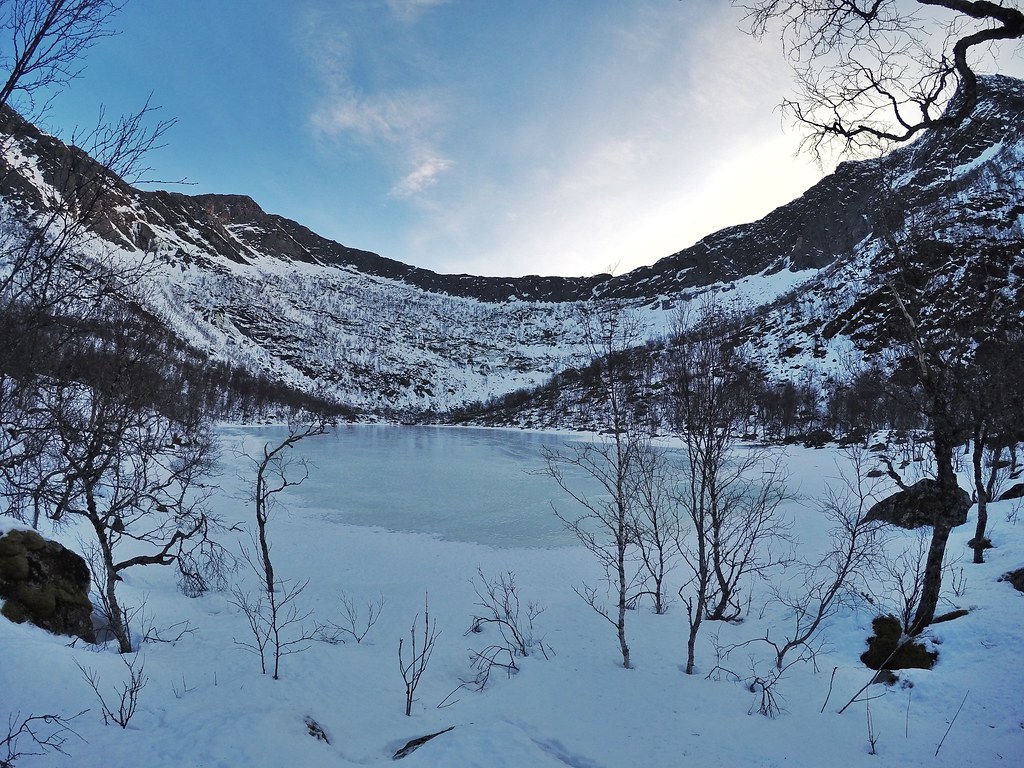 It was so cold that I didn’t even fancy eating lunch, and if you know me then you know it must’ve been cold! We did have our hosts really good flask with us which we’d filled to the brim with coffee. But then we realised their flask didn’t come with a cup and it was so damn good that the coffee was still piping hot. So we couldn’t even drink it straight from the flask as we’d scold ourselves.

We played it safe and took the same route back and on the way home the bay had filled with water as it was high tide. We noticed a collection of rocks dotting their way into the sea and headed out for some photos. The sea was all slushy around the rocks, like a shaved ice mixture, and it was a beautiful clear blue colour from the ice on the sea floor. 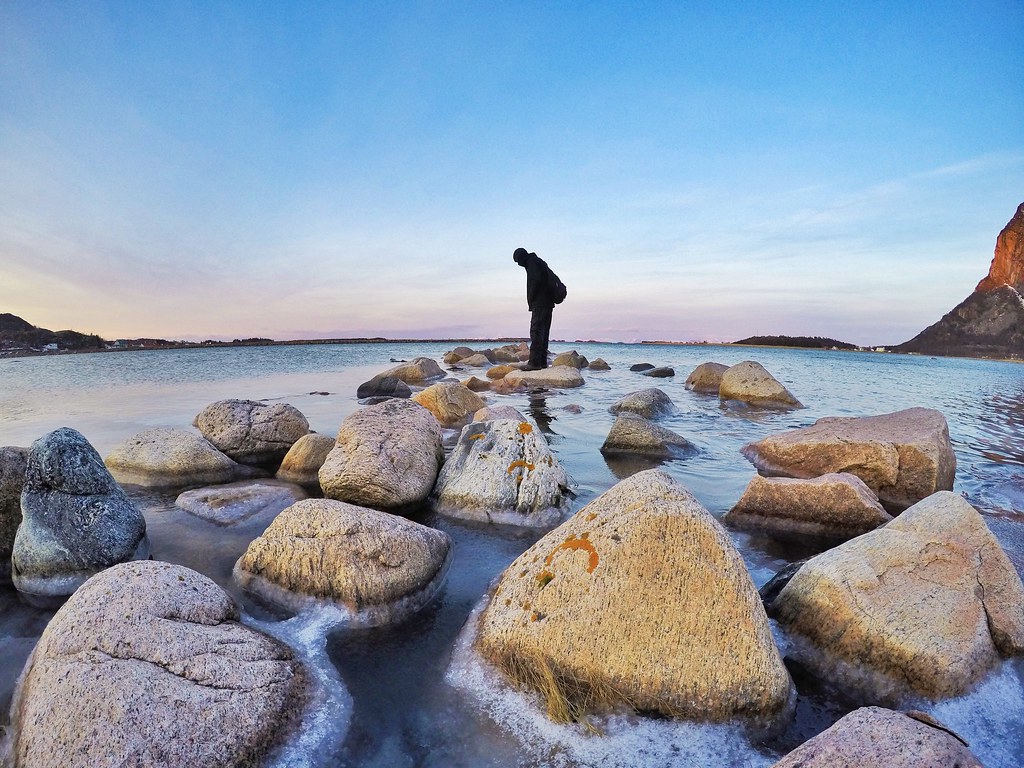 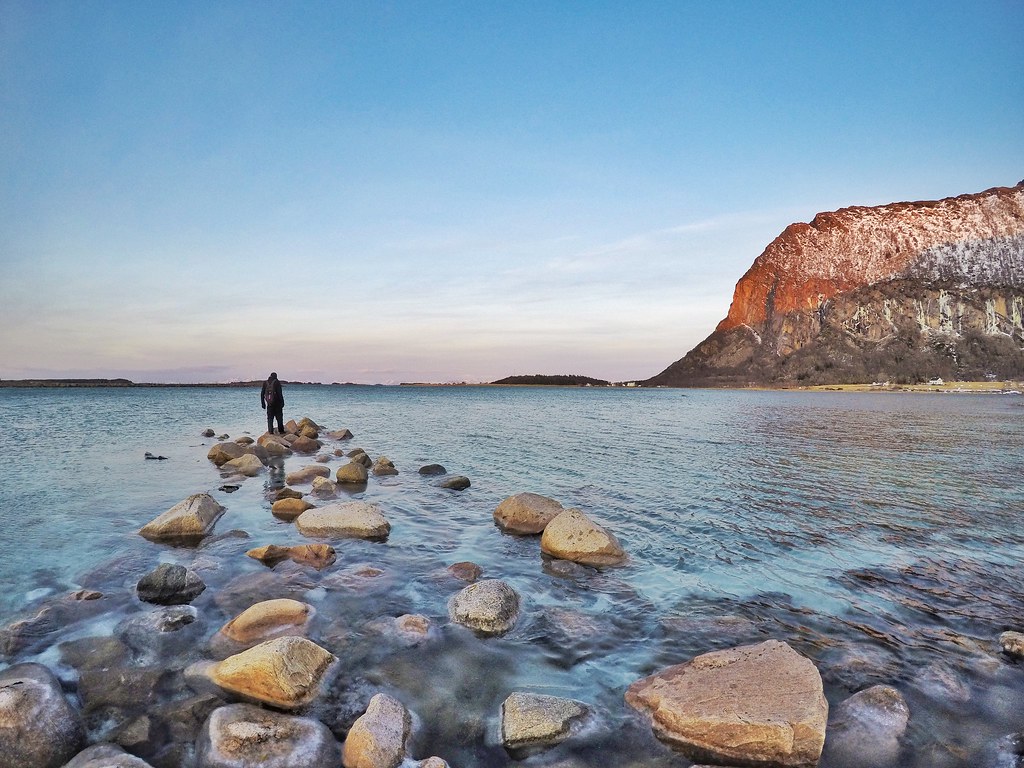 It was looking like a good sunset so on our way home we detoured to the nearby ponds to capture the sun turning the sky a deep orange colour. We were now officially exhausted and my feet had turned into ice blocks, so we headed home and got a damn mug so we could drink our coffee! 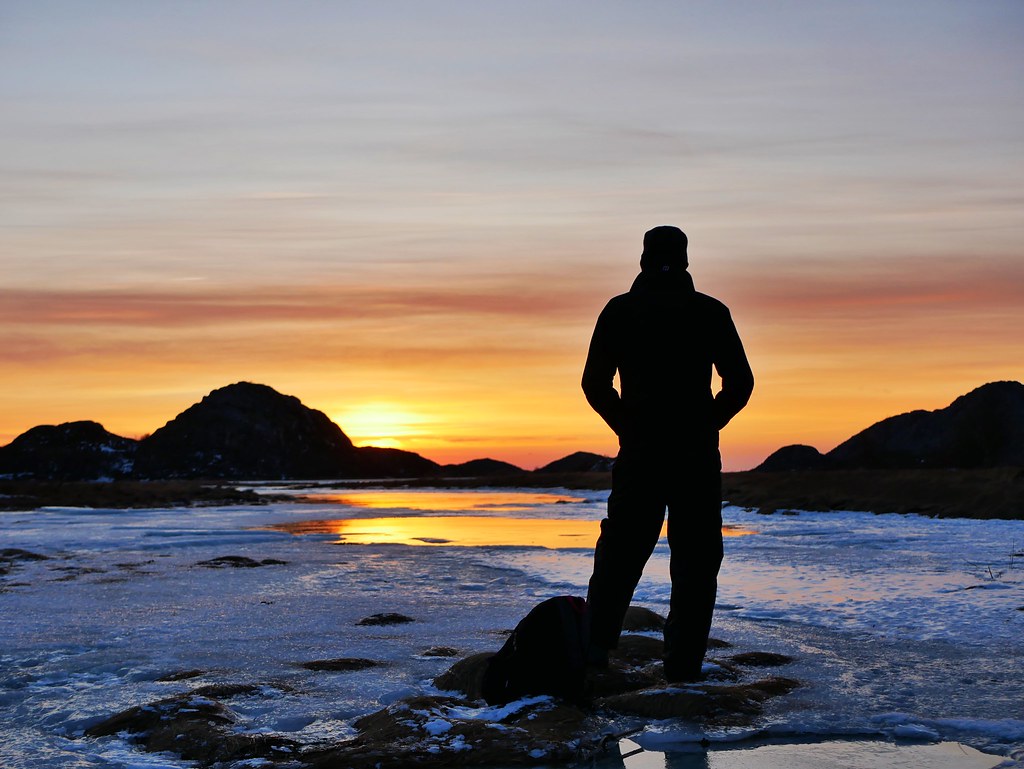