Living on a jetty is all fun and games until there’s gale force winds, and then it’s kinda scary. After days of wonderful, calm weather and mirror-like sea, we were hit with 45mph winds and even stronger gusts. The wind howled through our extractor fan and wrapped itself around our apartment with a loud whistling sound. As we tried to sleep our beds shook and I kept drifting off and having nightmares of the jetty collapsing and trying to find a window to swim out of. Whenever we opened our front door we’d get flung to one side and have to battle our way out of the house. It also became very challenging walking along the icy roads; we’d step on a safe spot but then the wind would push us and we’d end up unintentionally running (and slipping) along black ice. One night a massive gust whipped into the side of the building with such a thud. We quickly turned to each other in sheer panic as the house shook and actually creaked from the strong gust. When it passed I said “I actually thought we were going to die!” and then I roared with laughter like a crazed maniac, as if I’d cheated death when it wasn’t even close…maybe living in a remote village isn’t as good for my sanity as I’d of hoped.

The weather still wasn’t looking good for our day off so we decided to grab a ride with our host to the nearest town 20km away where we could buy some food that wasn’t available in our village. It was still dark when we arrived at 8am, our host went to work and we had until 2:30pm for our bus back, that’s a lot of time to spend in a supermarket so we headed to the little library first. There was a sign on the door that suggested it opened at 9am so we sat on a bench and waited. It was freezing cold and we just had our eyes peering out from above our balaclavas. When it got to 9:15am Craig looked at the sign and let out a big huff before turning around and shooting me evils “it clearly says it opens from 9am on MONDAY’S and THURSDAY’S, it’s closed the rest of the week!!” Oh dear…we visited on a Tuesday!

With a full flask of coffee it seemed silly to pay for a drink in a cafe, so we opted for a walk. We never seem to take the correct trail and we found ourselves in a dense, snowy forest. The ground was scattered with moose prints and lots of fresh skat so we kept our eyes peeled for an encounter. Our host said on his drive to work he see’s reindeer most days and moose at least once a week. 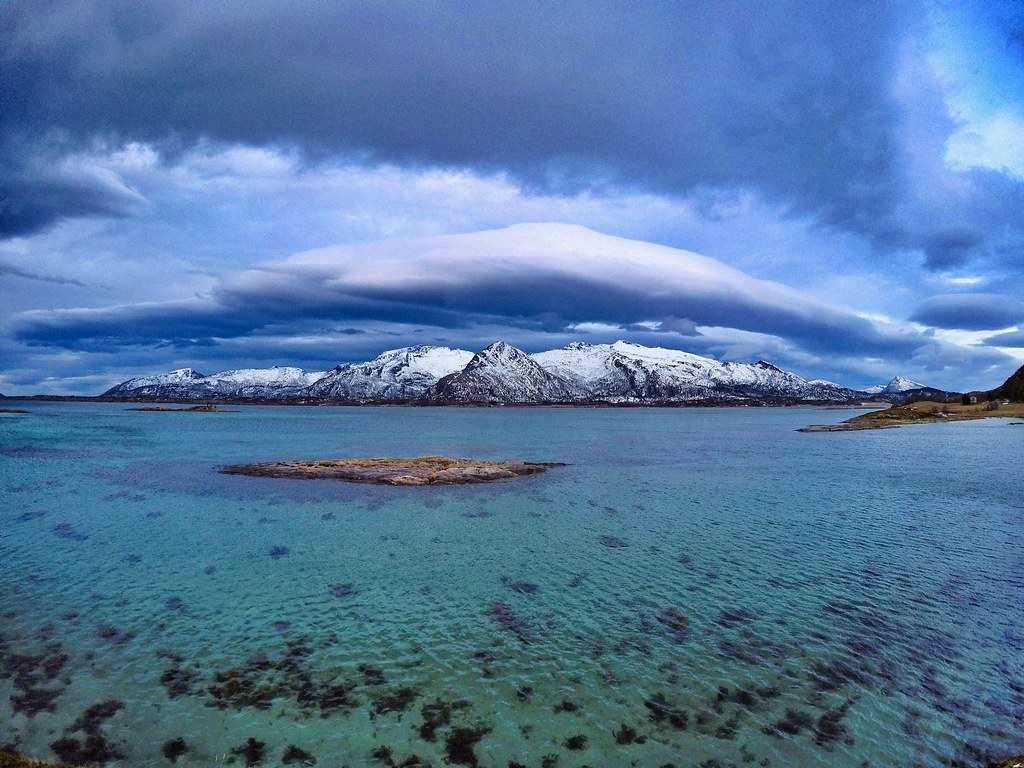 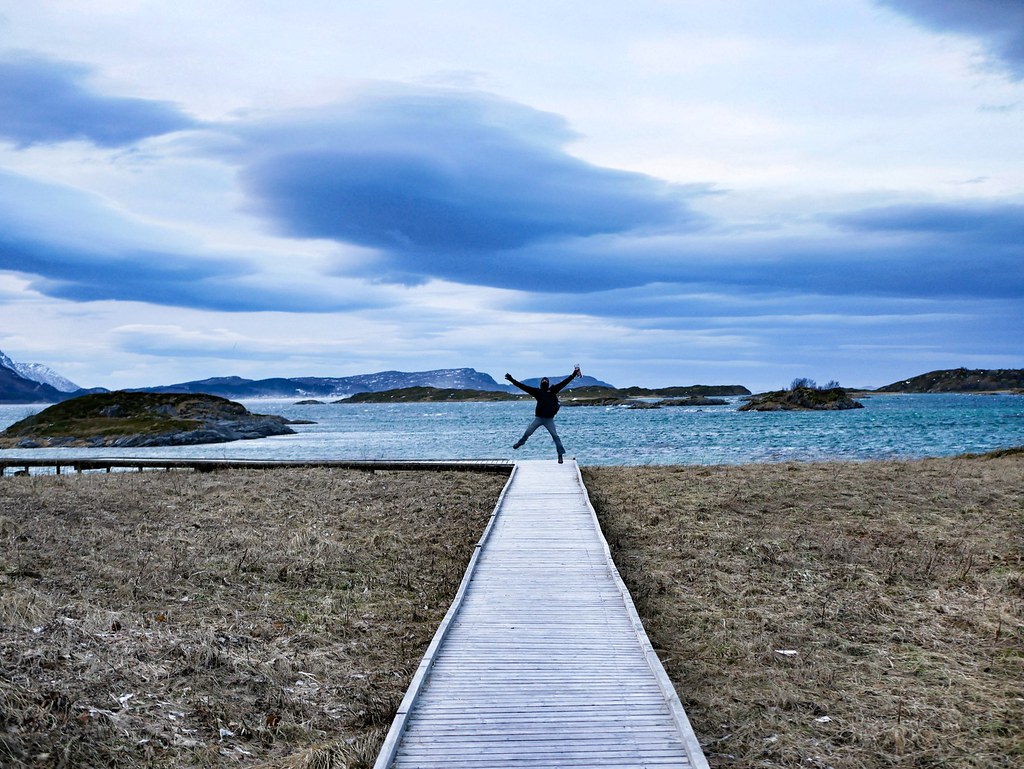 I soon became bitterly cold as my super-duper winter trousers weren’t so super and didn’t stop the wind, so I ended up getting undressed in the woods and putting a pair of long johns on, boy did it make a big difference! After a while we spotted a boardwalk below us so we followed it along and found ourselves at a beautiful white sand beach. We were on the edge of a fjord, surrounded by snow capped mountains and little islands amongst the turquoise sea. The wind was brutal but just behind the beach was a rustic hut with a traditional grass roof. It was the perfect spot to escape the wind and it even had a fire pit and bbq. We decided it was a great place to spend the day, the only problem was we didn’t have a lighter for the fire! So we went back to the town, bought a lighter, sausages and marshmallows and trudged back to the hut. 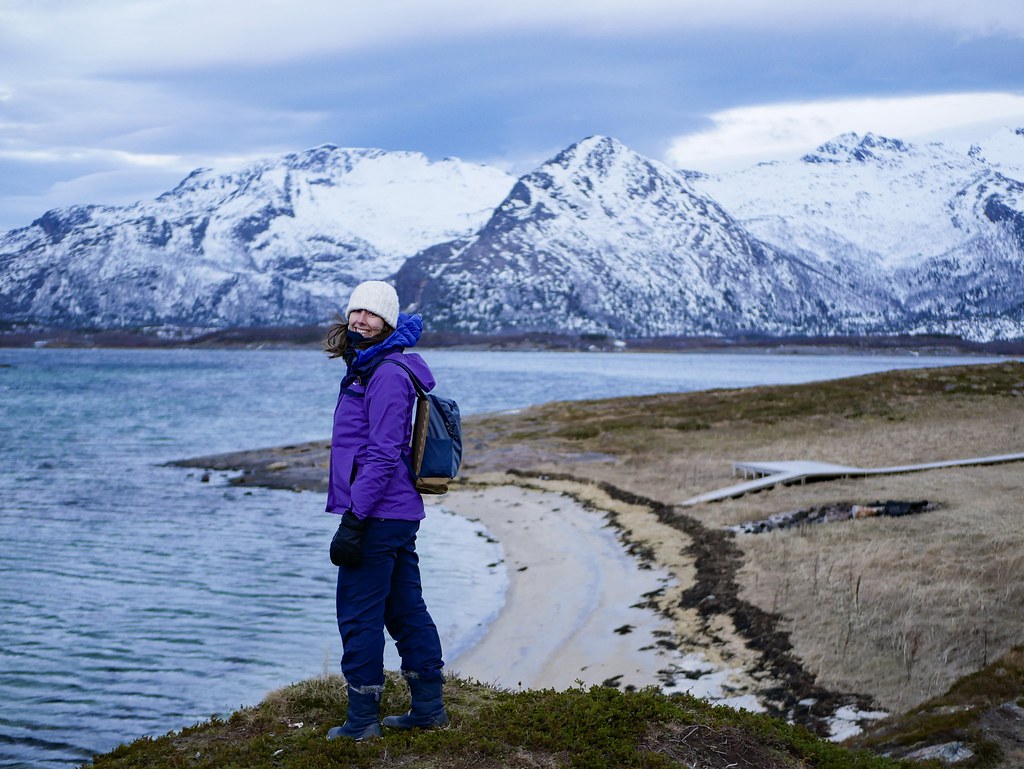 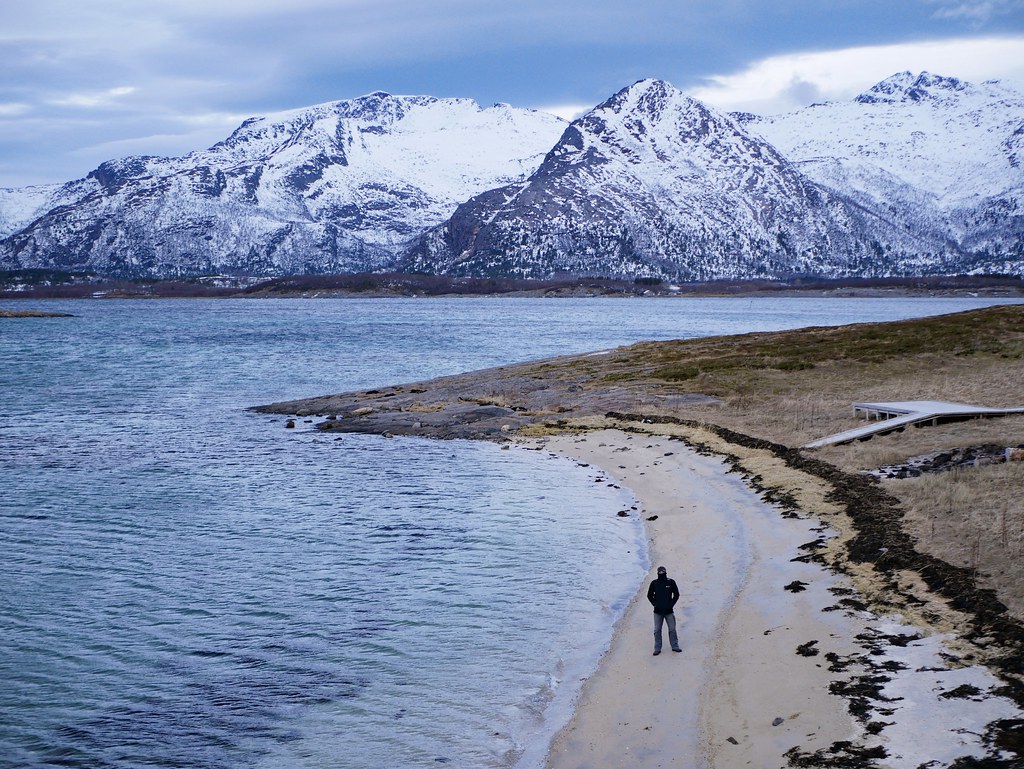 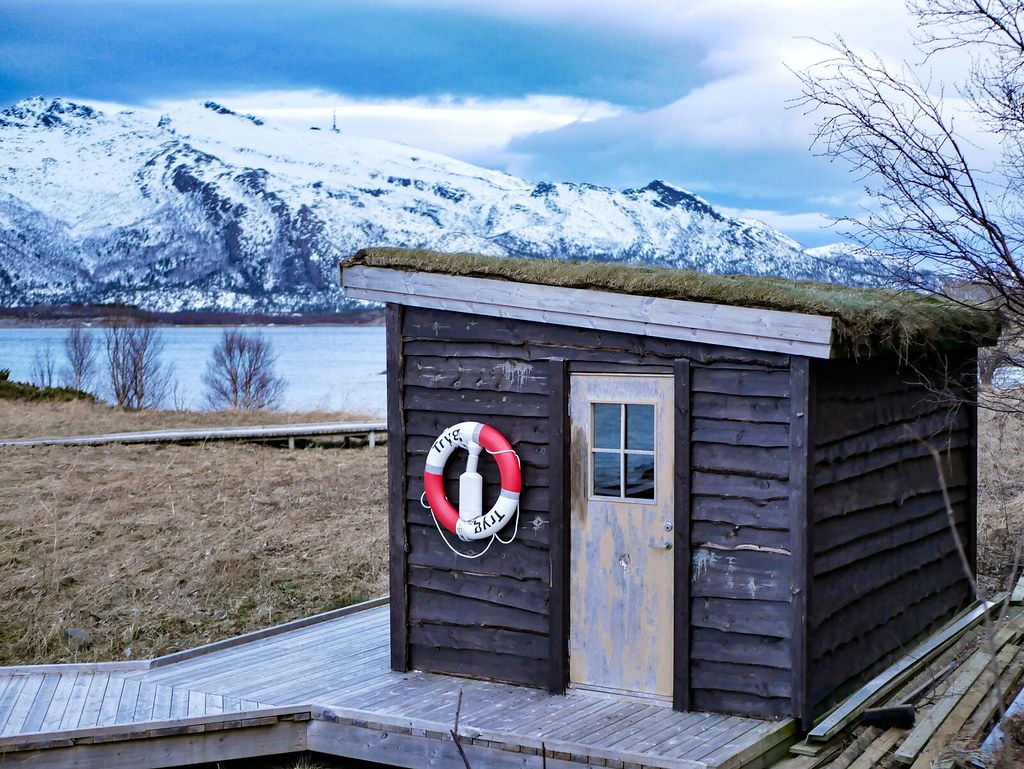 The wind had totally changed directions when we got back and was now blowing right onto us. It made the fire making process a bit of a smoky mess but eventually we had roaring flames and we began to thaw. Craig put his sausages on sticks and barbecued them, he even managed to slot the stick into the crack of the floor so it rested above the fire like a fishing rod from a boat. Craig took some photos of me by the fire and we later realised that every shot had his sausage on the stick perfectly positioned by my crutch! Literally the most awkward photos we have of me…Craig’s insisted I add a photo to this blog, so I hope you enjoy it as much as he does. The wind eased a bit and we could finally relax and gawp at the stunning setting which we had all to ourselves. It would be such a great spot to visit in summer as the sea was crystal clear. 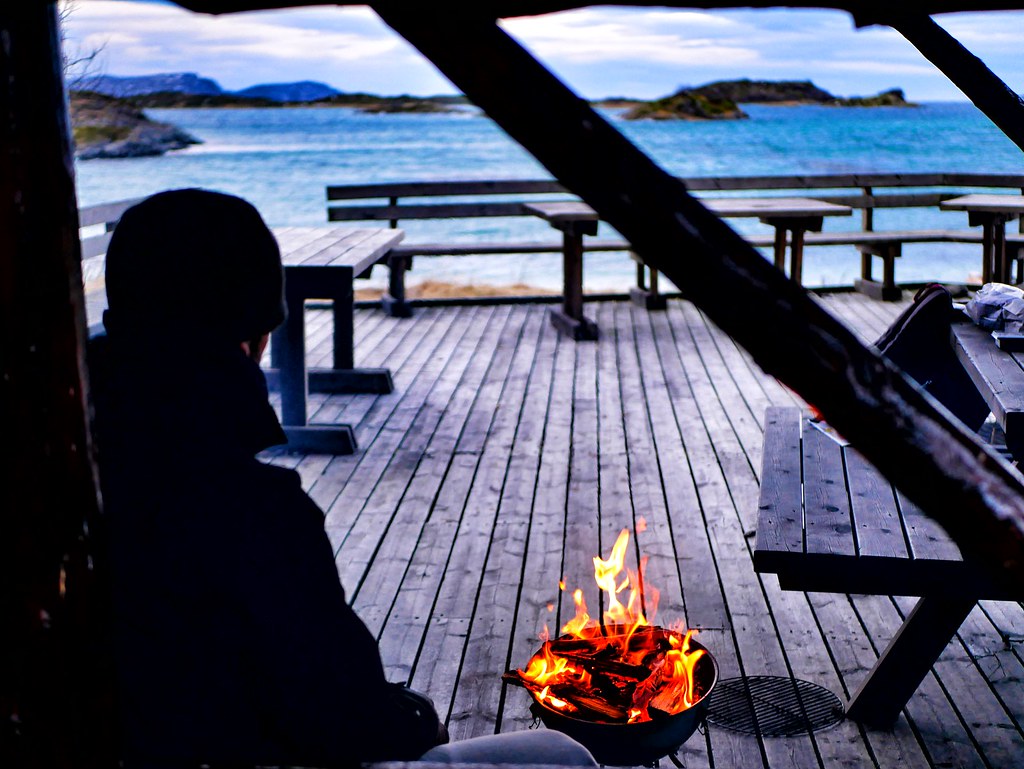 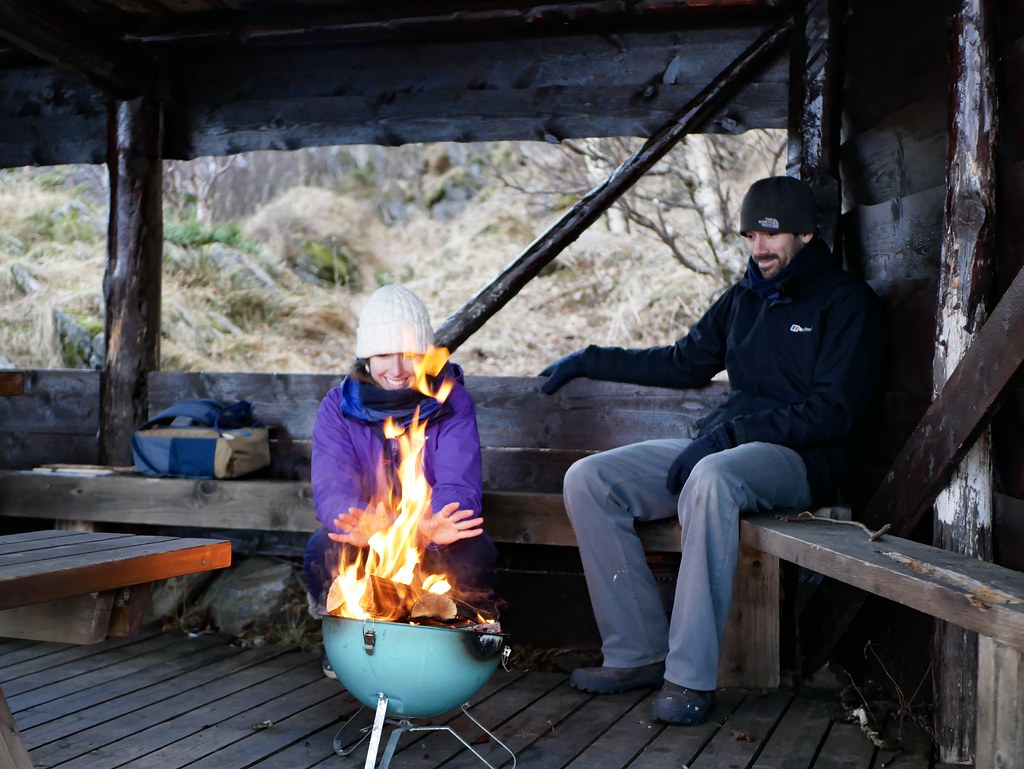 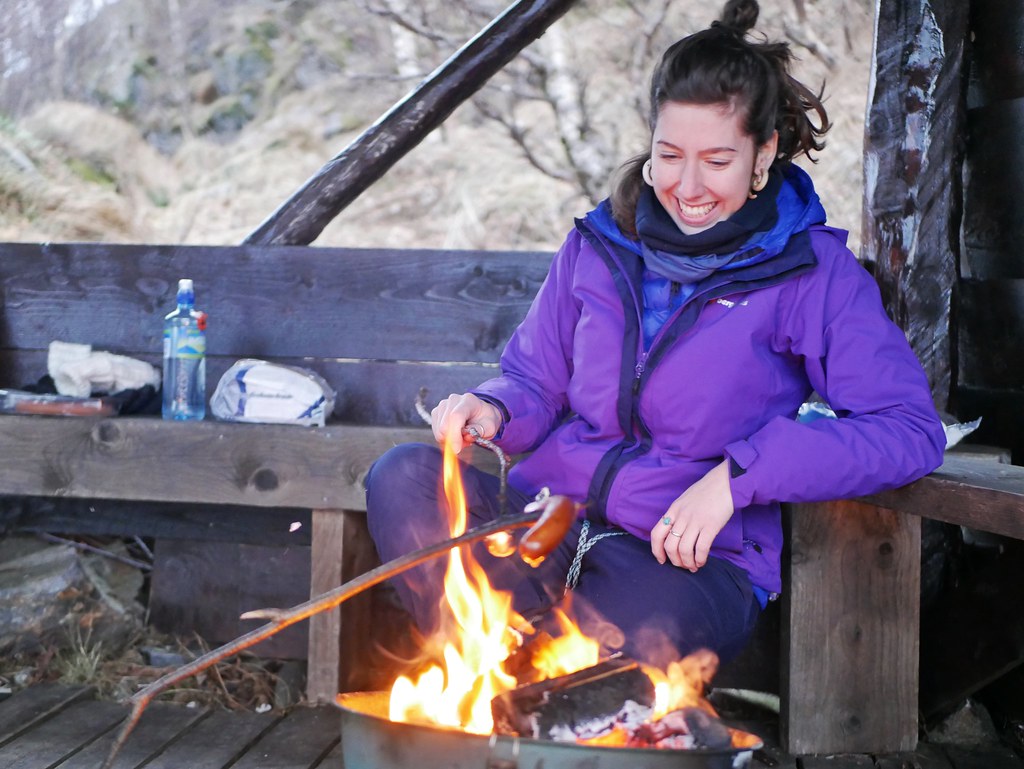 We did our food shop and ended up spending £80, then we left and questioned if we had any food for dinner. Our bus home was actually the school bus so we queued up amongst the kids. It was a huge bus, with about 10 passengers. The driver stopped outside each of the kids driveways, even if they were only 10 meters apart. To be fair the roads and driveways were icy as shit so I don’t blame them. We felt exhausted when we got back home even though we hadn’t done much, but it was really great to see a new area and we were so happy that the library was closed.

It might of been wild winds but the actual weather in Steigen was lovely and in those five days of winds, we saw some of our best sunrises. On one particular day, pink lines formed above the mountain tops, so I began snapping photos. I wasn’t making much progress on the walk to work as I couldn’t put my camera down. The sky was getting better every minute, some areas were purple while others pink and orange. It was bitterly cold out and Craig finally declared that he’d had enough of waiting for me and was going to walk to work on his own. So I took my time and between scenic spots I’d frantically speed-walk to catch up with him. Before I got to basecamp I veered off the road to photograph the fabulous pink sky reflected perfectly into a pond. When I got back to the road I realised my GoPro had fallen out of my side pocket! I panicked and marched back to the area where I thought I jumped over a frozen stream and the most obvious place for it to have fallen out. It wasn’t there, nor was it by the pond, and I realised I was actually talking to myself chanting myself to find it while telling myself what an idiot I was for not packing it in a proper place. I figured there was no way it would have fallen out along the road as it would of made a loud noise, but as I looked up the road, I saw a black object and ran for it like I was the village hero saving a child from being hit by a car…at least that’s how I saw it, no one else was there to say otherwise. I was so relieved to find it and I rushed to work where Craig was tapping his fake watch. Adrenaline and a bit of panicky exercise is actually a great way to warm your body up! 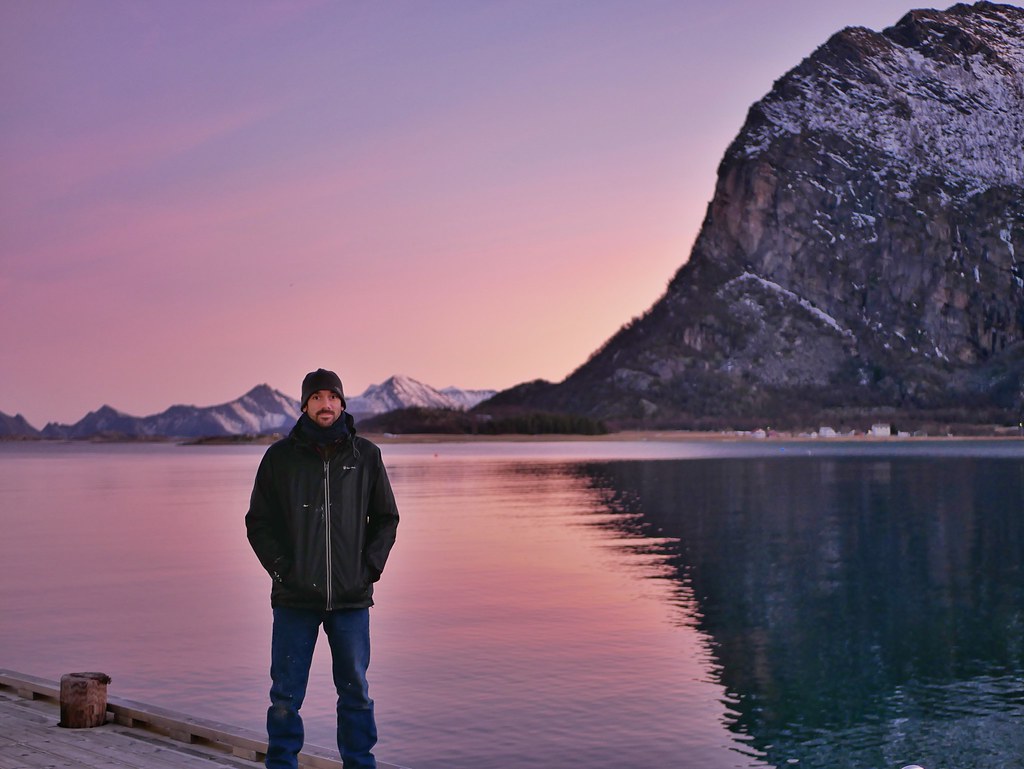 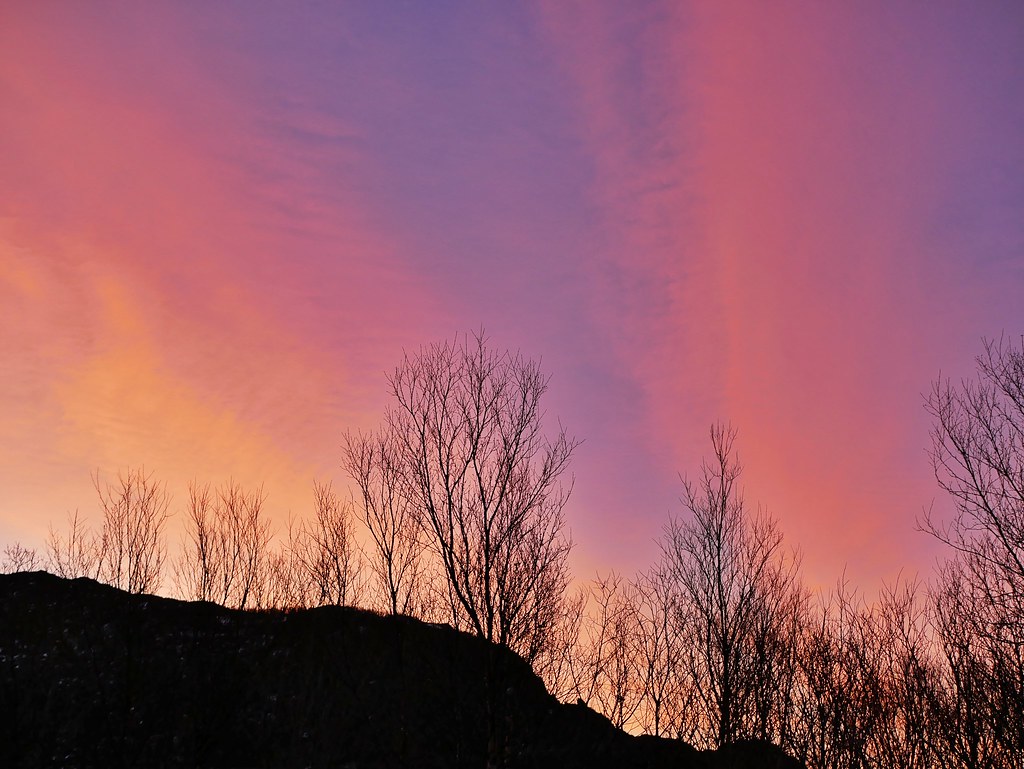 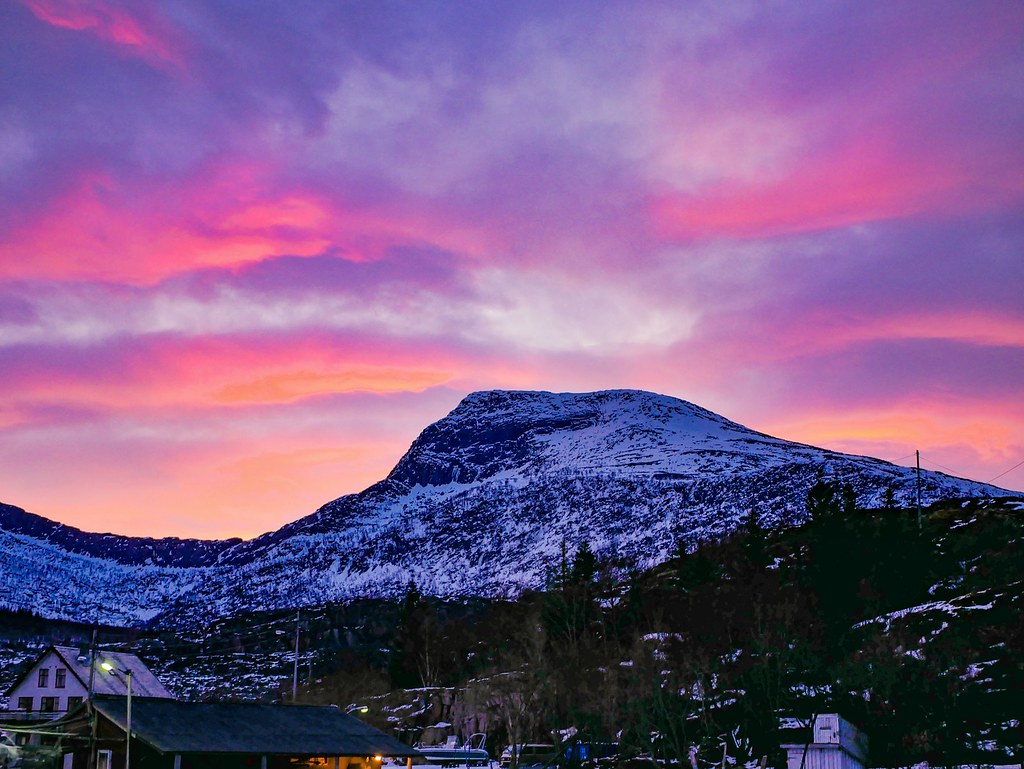 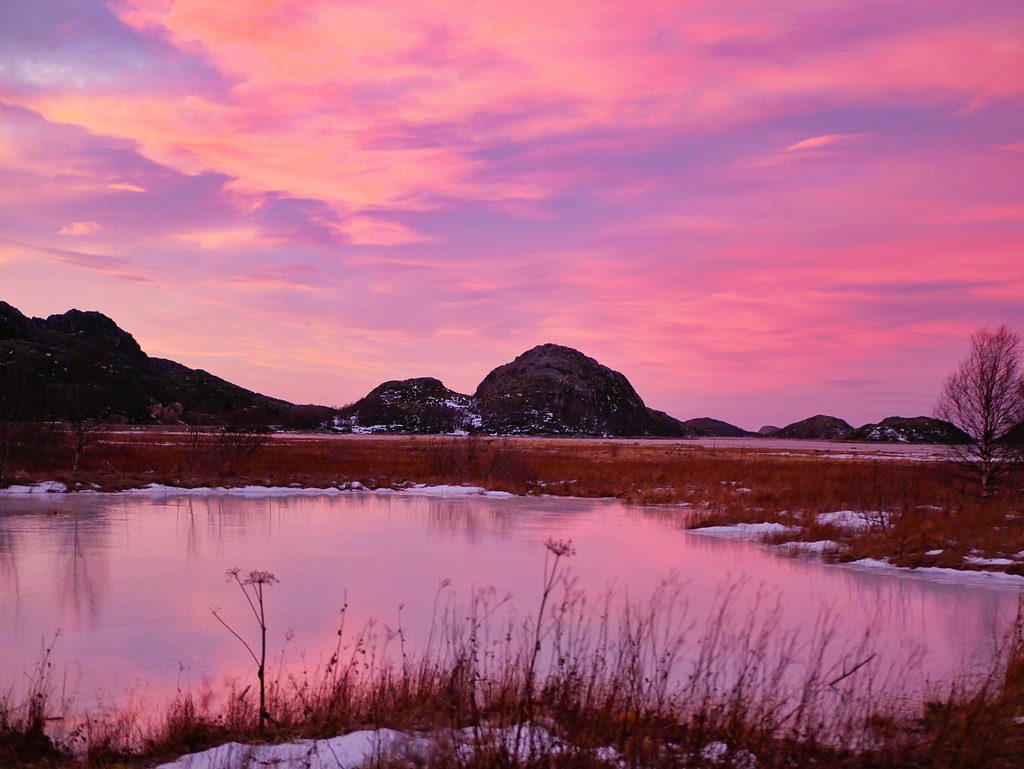 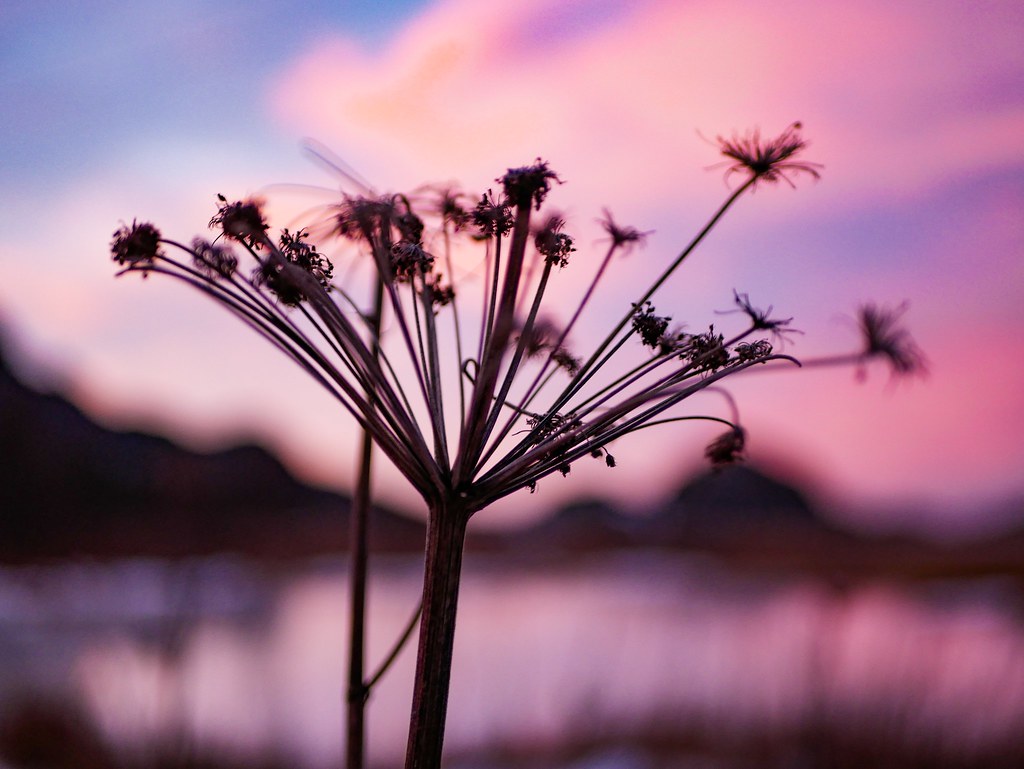