I was just awoken by a ferry gliding past the front of our house. It was so close that I could see strangers sipping coffee under the warm light, like they were sat in our lounge while I was laying in bed. The boat was gone in seconds and I was left in darkness, still wandering what the view looked like outside…patiently waiting for the sun to rise at 10:53am. 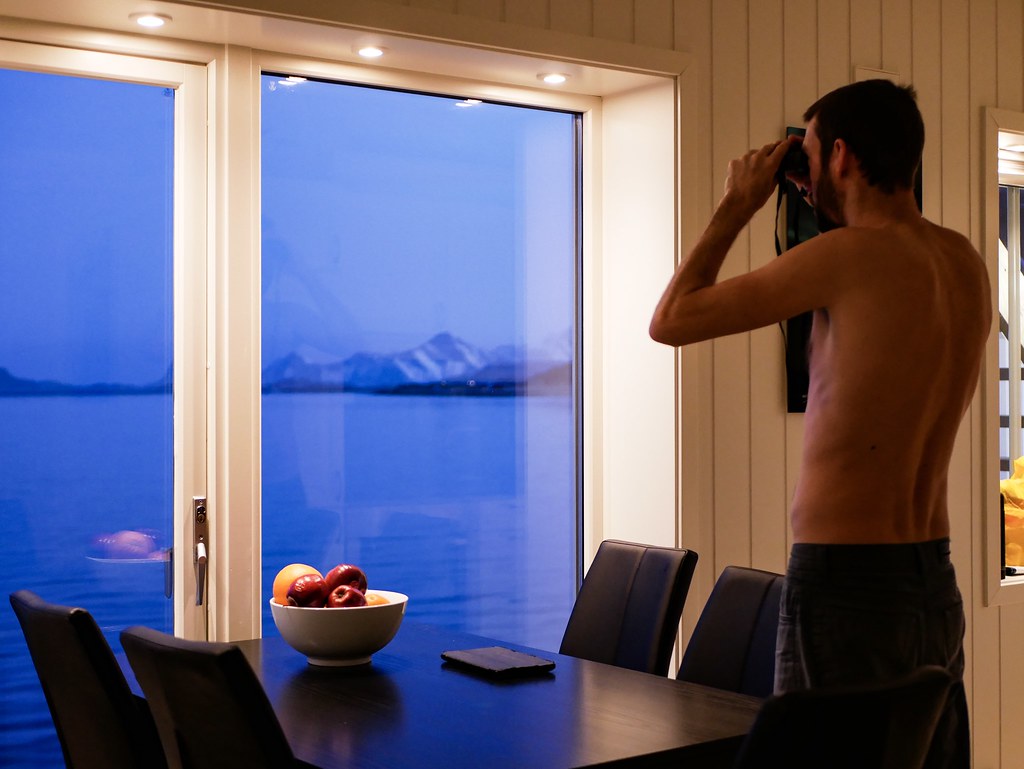 This is only our temporary home of course, a base while we volunteer in a remote village in Steigen, Norway. It took us two days to get here, flying from Gatwick, high above the clouds where we witnessed a 360 degree rainbow with a silhouette of our plane in the centre of it. We landed in Oslo two hours later, the area was a winter wonderland, and after passing a vast area of snow covered rocks and frozen lakes the landscape turned into frosty forests and farmers fields covered in white blankets. It was -11 degrees outside, but we remained warm inside as we had a 7 hour wait until our next flight. The airport looked fresh and modern, and to our amazement workers got around on scooters! We’d brought some food from England which was a relief as it cost £7 for a sandwich or £20+ for a burger or pizza! The sun was low at 2pm and began it’s decent, turning one side of the airport into a warm orange glow and the other crisp with blueish snow and a pink horizon.

We finally touched down in Bodø at 11pm, it was about 2 degrees outside and we had a 20 minute walk to our Airbnb. It seemed that most people were getting picked up or grabbing a taxi, but not us budget savvy travellers!! It was all going well until we left the airport and found ourselves on a sheet of ice. There was no grit or salt put down and within a few steps Craig was flinging his arms in the air and falling to his arse. We both had our heavy backpacks on, so it was a nightmare trying to heave him up while slipping around. Luckily it was dark so hopefully no one saw our humiliating start to Norway. When I told my mum about our disastrous walk she asked me if Craig had looked like a helpless beetle stuck on its back, which made me laugh a lot.

Our Airbnb hosts were delightful but the bed was tiny and the duvet even smaller, we joked that it was probably a minimalistic, Scandinavian design – and then the battle to stay warm began. We had to wait around Bodø until our 5pm ferry to Steigen so we set off at 10am along the dark, snowy streets. We were beyond nervous about walking along the ice again, I literally stayed warm all day because my adrenaline was so high from the fear of slipping. The annoying thing was we were so prepared with our brand new snow boats, but as we slid along like Bambi on ice, kids were running or walking with confidence to school – wearing shitty trainers or fancy leather boots!

The ferry to Steigen took one and a half hours and we were greeted in the tiny village by our hosts. Turns out Bodø’s icy conditions were nothing compared to here as the area outside the ferry port was one massive sheet of ice. I mean, literally an ice rink! We managed to shuffle along to the snowy curb and walk to our home for the next two months. We were over the moon when our hosts offered us their best apartment which they actually rent out to guests. As long as there’s no big groups booked then we can stay there, and if things change we will move into another apartment at their base camp. Our place was right at the end of the jetty and we were so happy as we stepped inside. It was really luxurious with modern Scandinavian décor and homely underfloor heating. After having a good chin wag and dropping our bags off we were taken to base camp to see what our projects will be. Base camp was a partially renovated 1960’s school and we’ll be helping paint and organise the basement, where the shower and changing rooms used to be.

After the grand tour we headed back to our private apartment and gazed out at the darkness, wandering what sort of view we’d wake up to. The sky was a brilliant blue colour when I woke up, sunrise was two hours away but the darkness was slowly fading. The view from the apartment was phenomenal, we were so close to the water that it actually felt like we were on a boat. The sea was calm with lots of islands dotted around, some were simple rocky hills while others were lines with snowy pyramids. Then I looked to the right and I was blown away by the colossal sized mountain outside our kitchen window, it’s sheer walls came right out the sea! 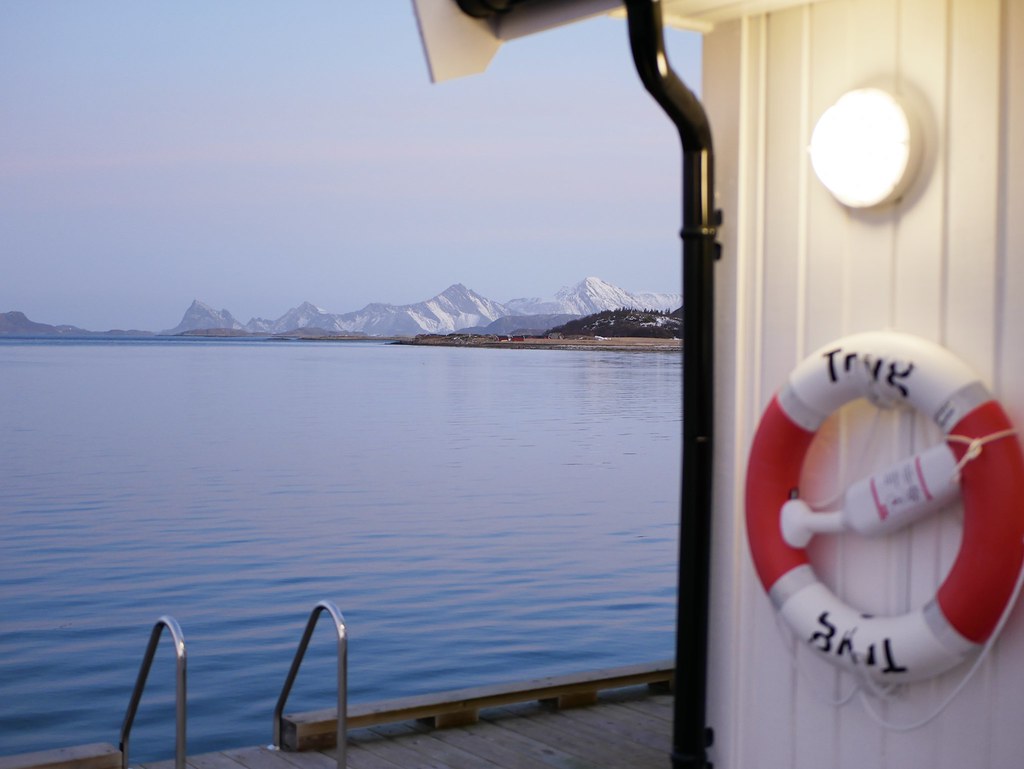 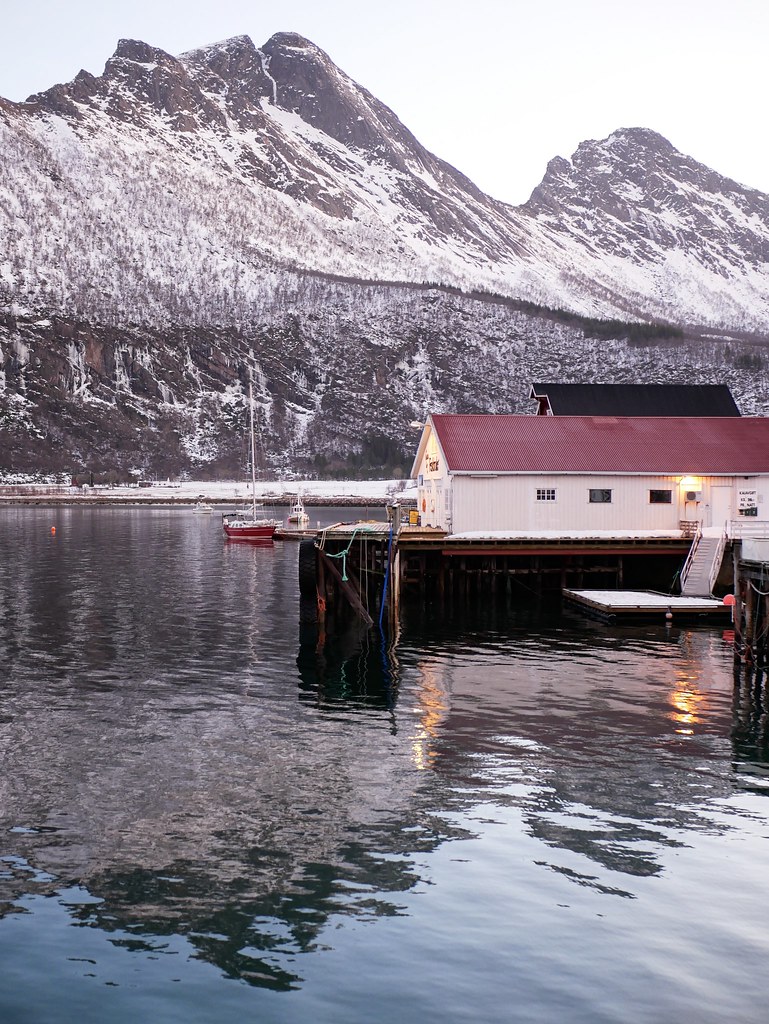 Gradually the sky began turning a candy pink colour which reflected on the mirrored sea and the snowy peaks. The pink haze seemed to last hours and spread in all directions. A little sail boat went past our window and I spent awhile just walking around the jetty snapping shots of the nearby islands and humongous mountains. I can’t wait to start exploring the area, we’re never going to want to leave! 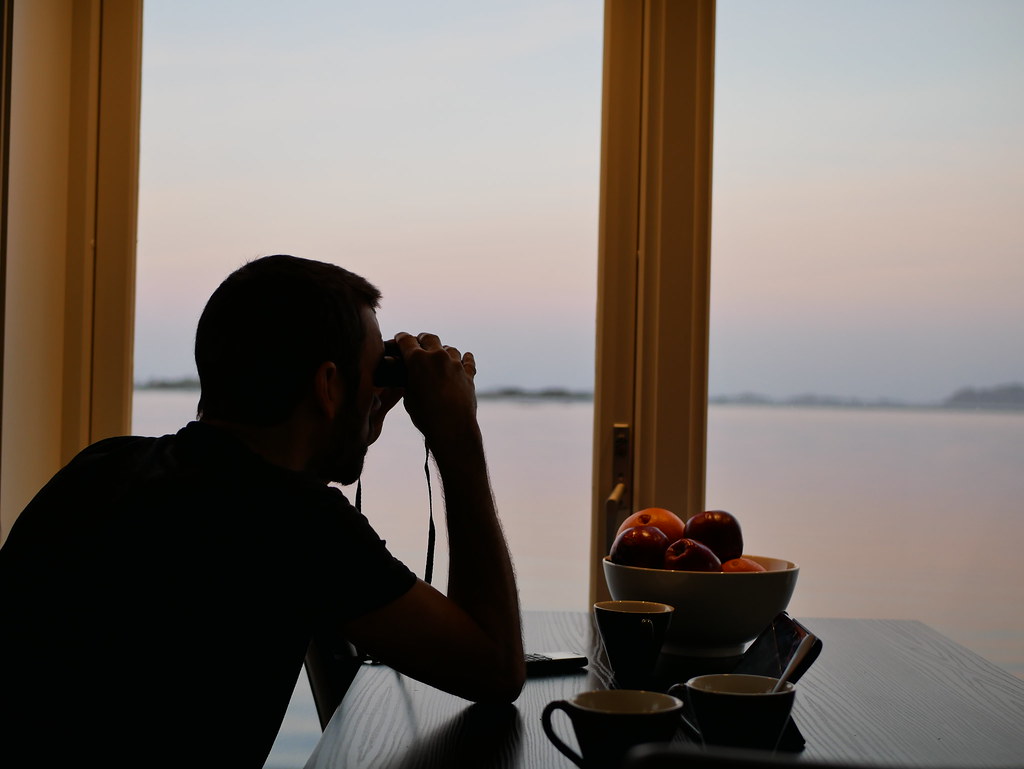 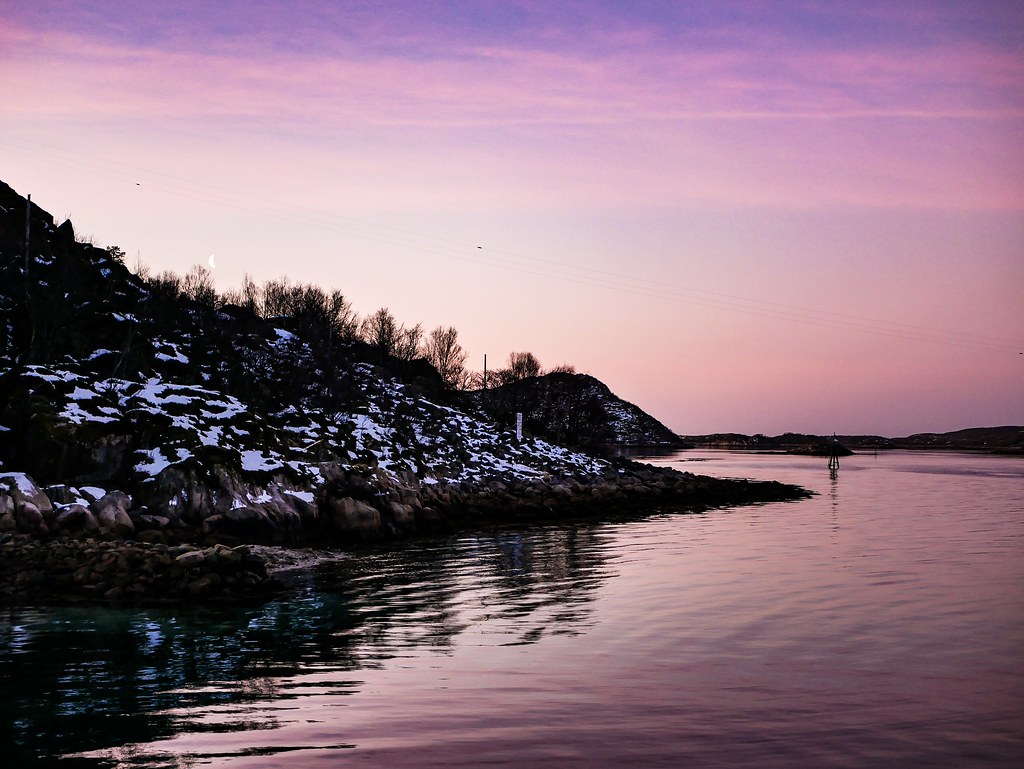 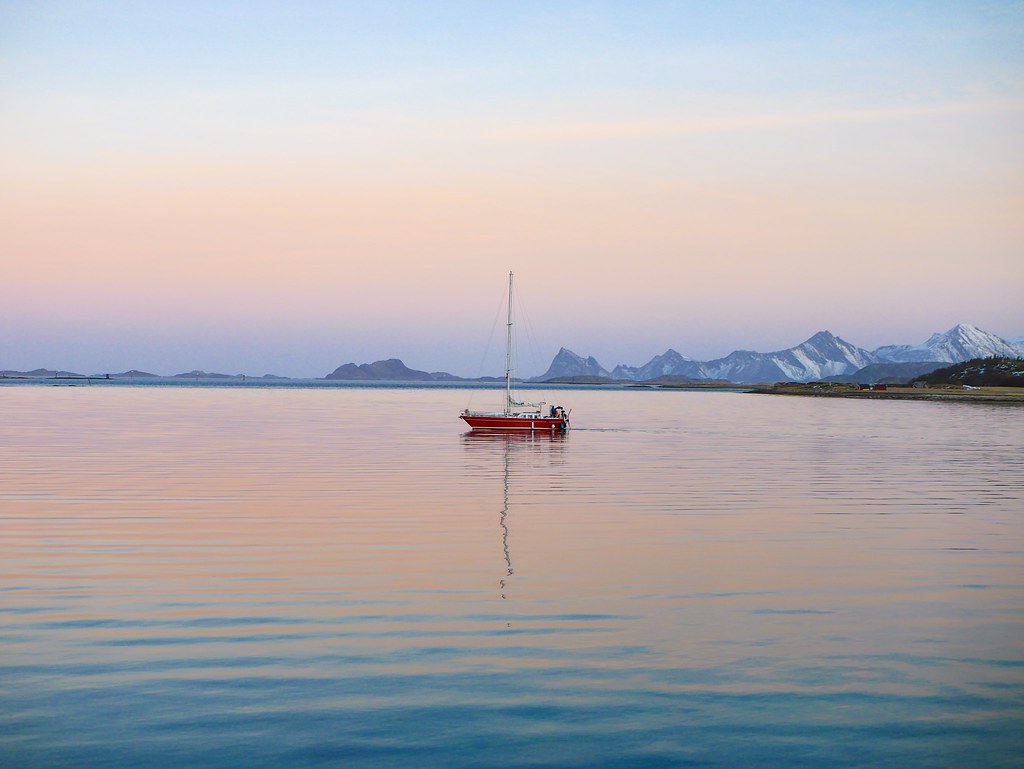 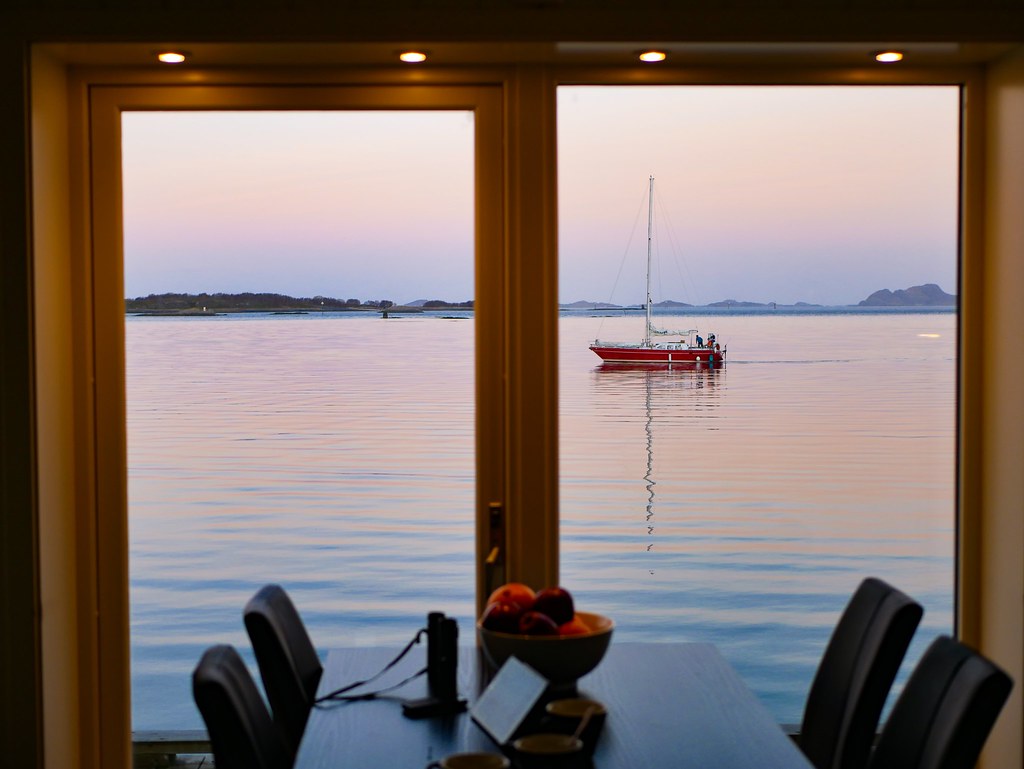