We picked the most perfect blue sky day to hop into our hosts jeep and go for a spin around the island. The roads wiggled along the pine covered hills and skirted high above the sea. Our first stop was Milia Beach, said to be the islands best. We were the only people on the curved gravel beach which was being gently lapped by the crystal clear Mediterranean waters. Craig started climbing up a rock to get a nice vantage point and as he was half way up (like 2 meters high) a dog came my way and was aggressively barking at me. This was Craigs opportunity to come and save me, to be the man….”Craig help me….get this dog away from me” I helplessly called. But instead of him shielding me with his hulk-like body he threw me the car keys “run back to the car if your scared”. Classic. Thankfully two people came out of nowhere and it was their dog and I acted all calm and cool like I wasn’t scared in the slightest “ah what a sweet dog you have…” while Craig just took photos of the beach like nothing had happened. 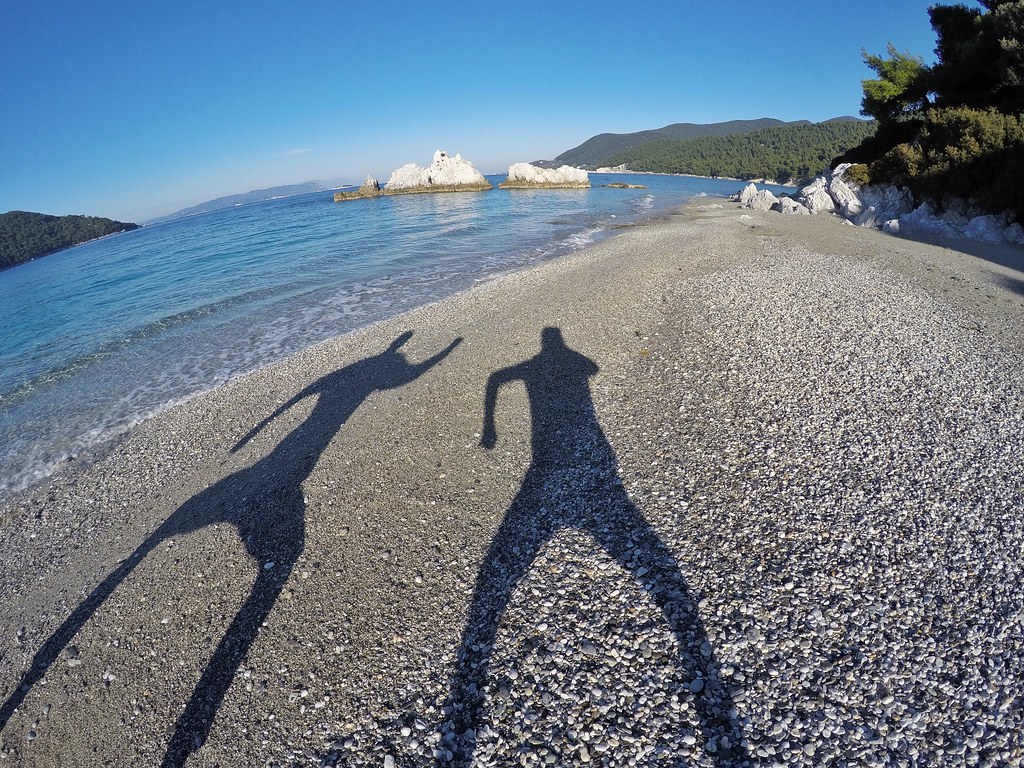 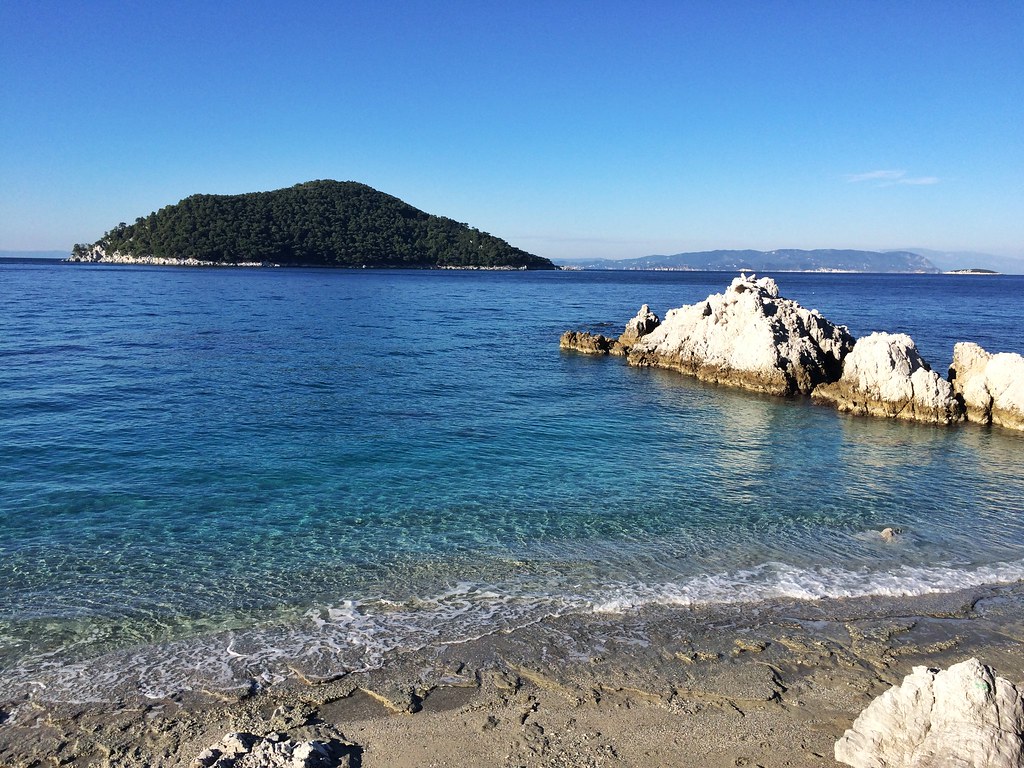 The beach was actually two curved bays, with some big white rocks separating the two and forested hills all around us. A green island lay out at sea and made the beach that bit more scenic. It certainly wasn’t a stunning beach, but it was pretty and the sea clear so we were happy. 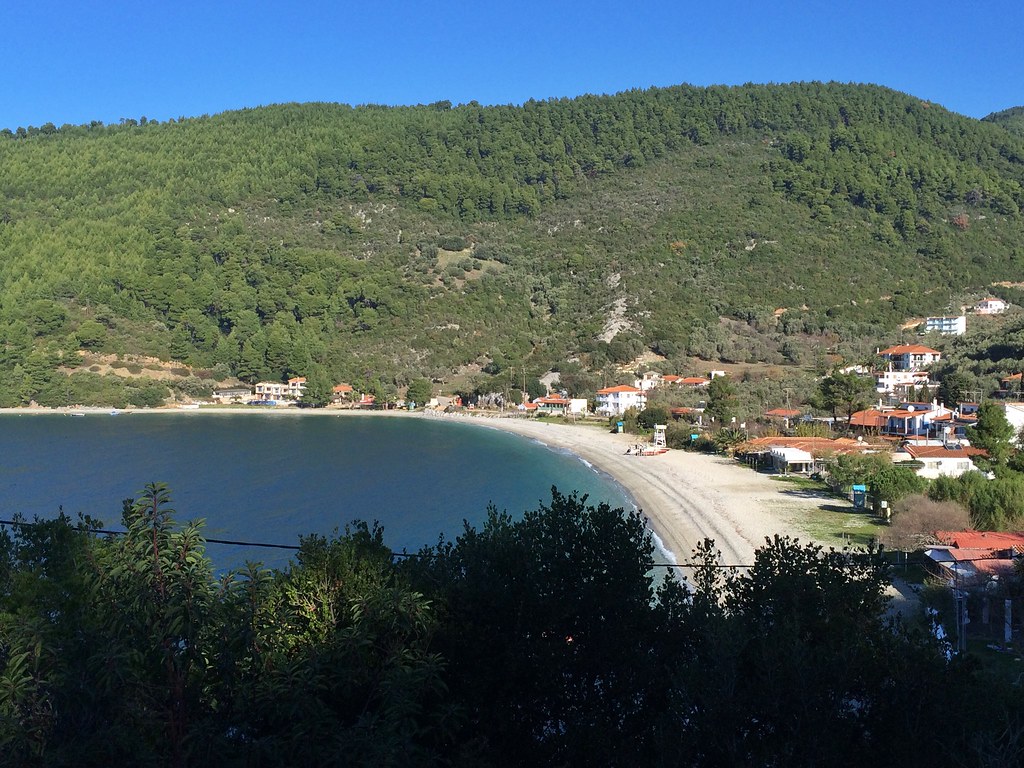 We commenced the roadtrip and headed for Skopelos town, but before stopping there we detoured north up an extremely narrow road on the edge of a cliff with occasional guard rails or the odd bit of chicken wire fencing. It was steep too, and single lane, so a right pain when we got stuck behind a heavily ladened scooter. We were heading to Glysteri Beach and as we caught sight of it in the distance I was almost going to tell Craig to screw it and head back. It had a brownish beach and looked very unimpressive, but we persevered and went all the way downhill to a tiny carpark beside an abandoned taverna. The buildings were graffitied and the area looked like it was a has-been beach and didn’t attract tourists anymore. 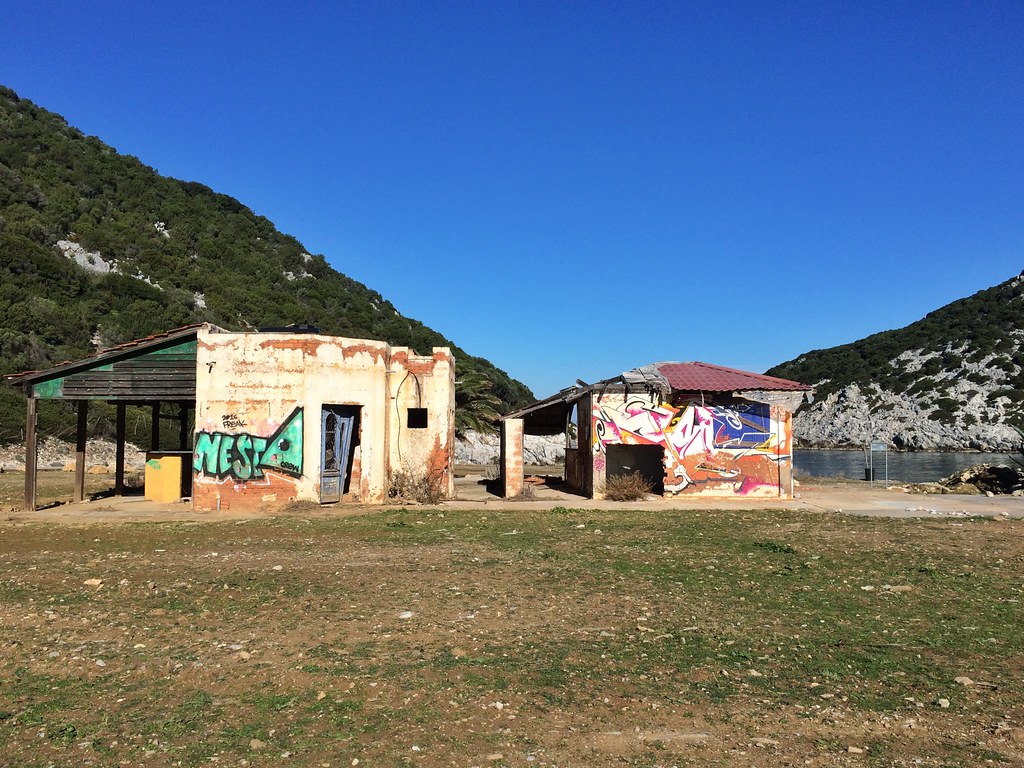 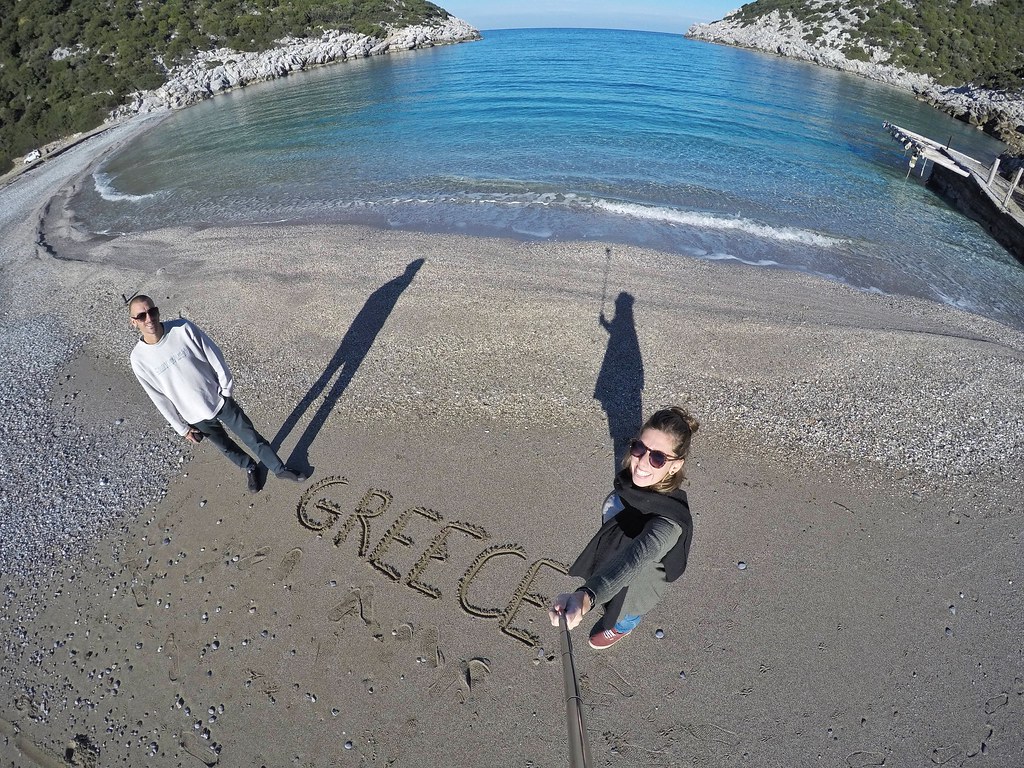 On closer inspection though the beach was actually really beautiful. The sea was so clear and twinkled in the sunshine. It was a tiny pebbly beach wedged in a narrow inlet with steep hills on either side. A little rickety wooden jetty was on the far side and had a fence to stop people going along it, but it didn’t go right to the edge, so we snuck around. Craig stepped right onto the edge which just had some planks of wood precariously placed. I didn’t feel confident stepping across so I asked Craig for a hand. I stuck my hand out in anticipation and received a single finger of help from Craig. What the heck? Who gives a finger for you to grab onto? Classic Craig once again. Thank god I didn’t fall in the water – imagine what help he’d be then, he’d probably pass me some rocks to help sink me quicker. 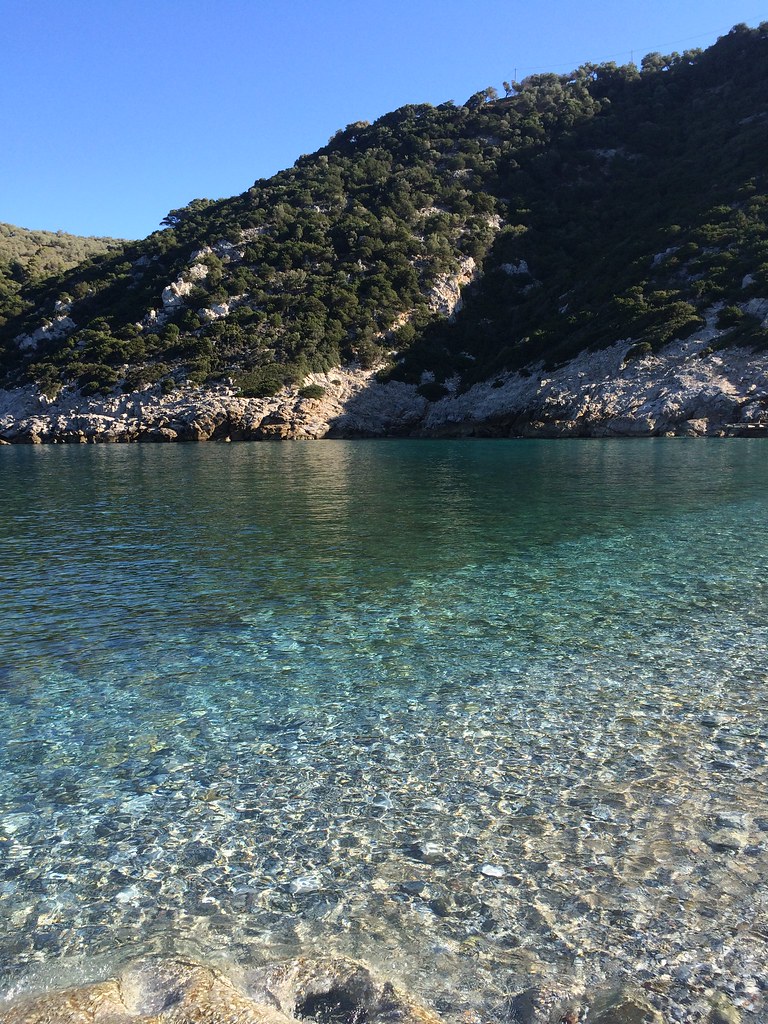 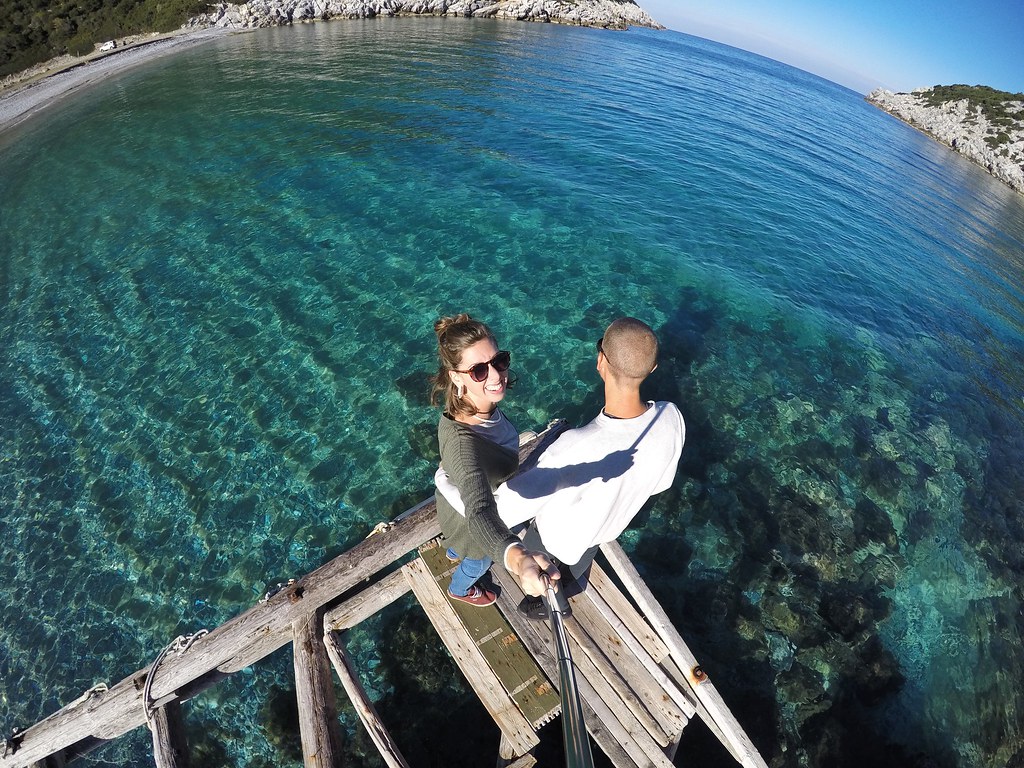 We then headed back along the skinny road and parked in a car park on the edge of Skopelos town. I was excited to explore the alleys while at the same time trying to keep track of which turns we’d taken so we didn’t get lost. A fat, ginger cat with a constantly tilted head followed us through the hilly maze. Whenever we stopped to take a photo she’d exaggerate the tilt of her wonky face and then dramatically roll over for a stroke. There were lots of beautiful doorways, colourful shutters and overgrown flowery bushes to please my eyes, and of course every building was whitewashed in true Greek style. 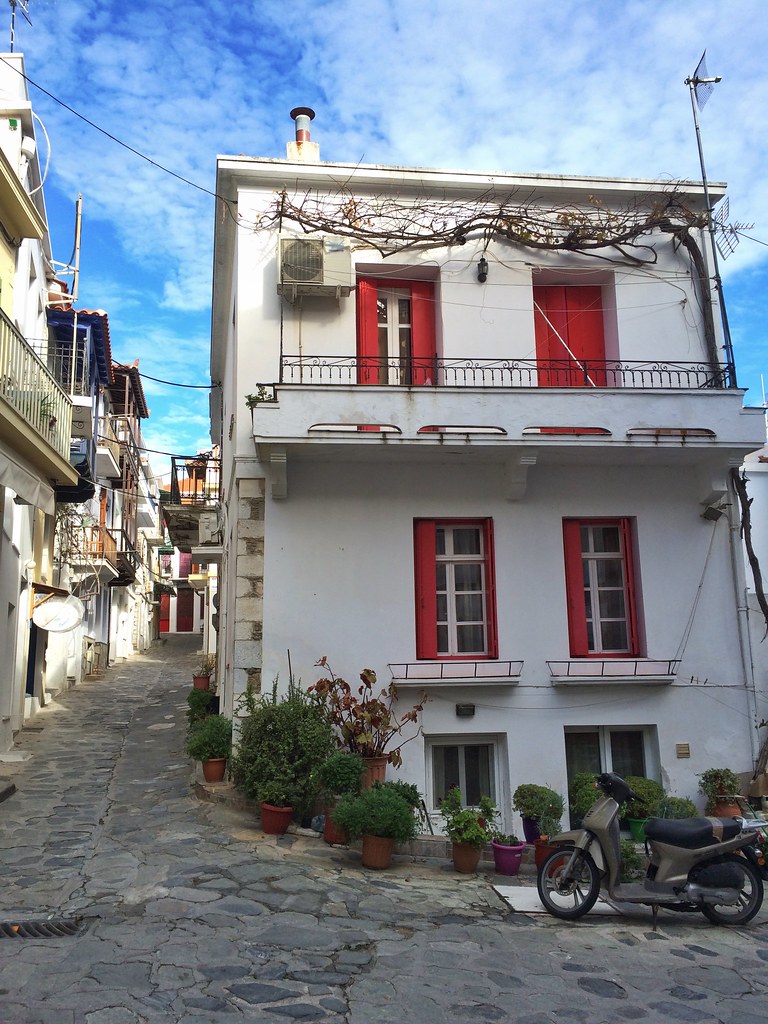 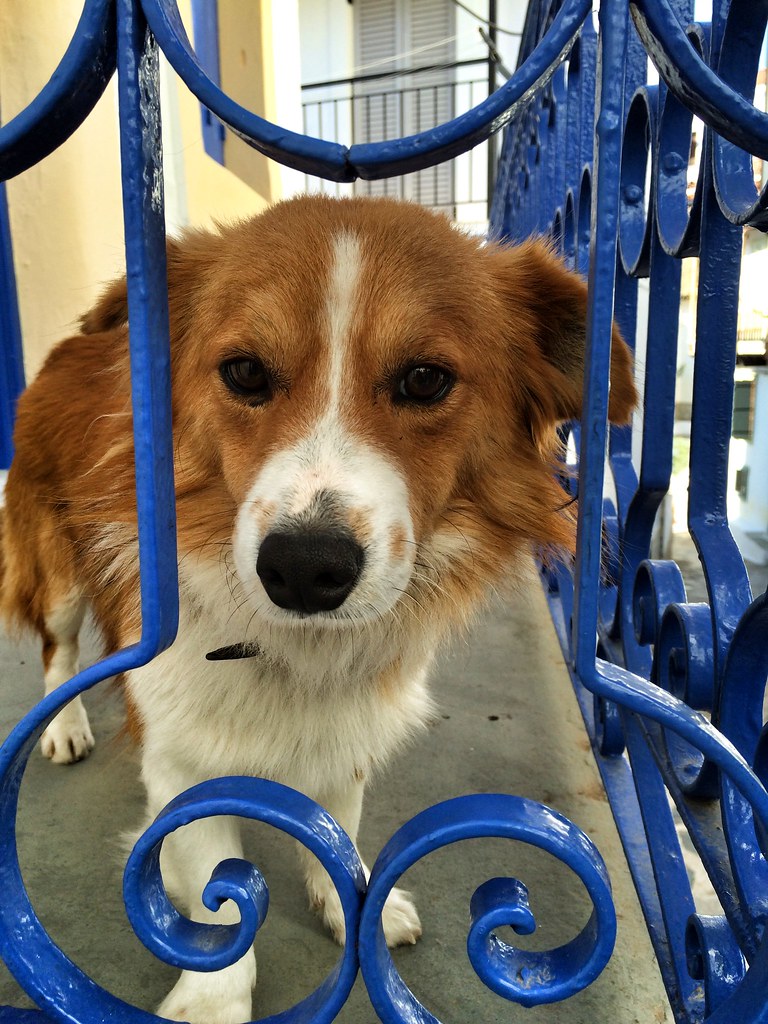 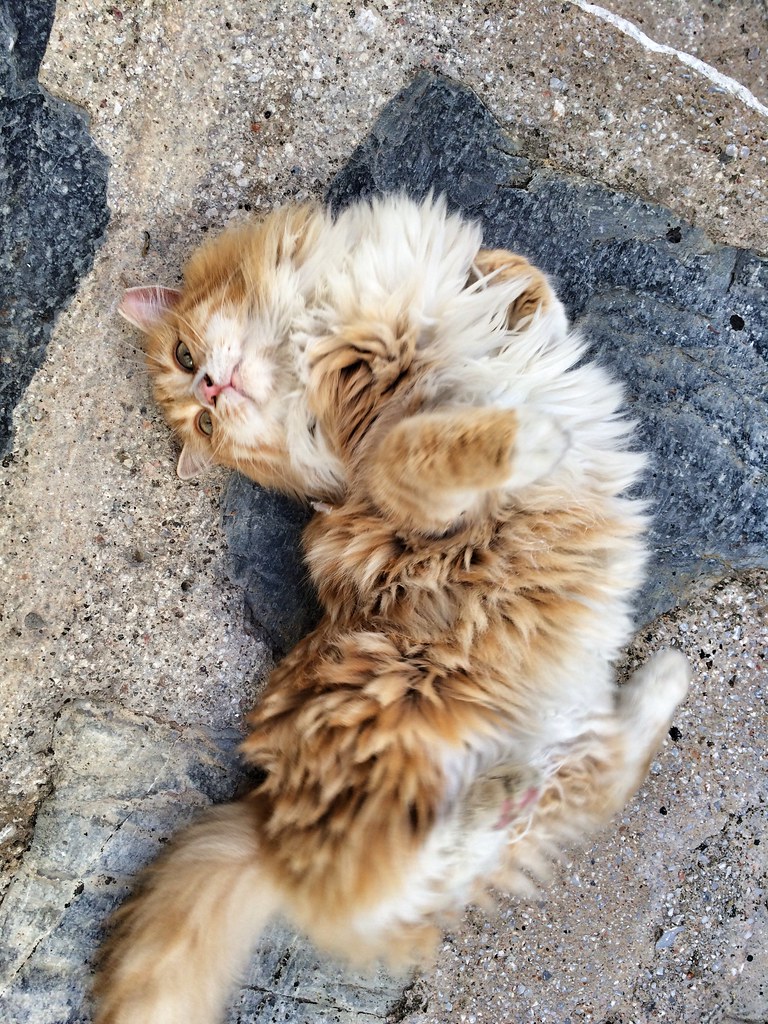 We reached the waterfront where there was a Christmas tree but not much else happening. Most of the shops and cafes were closed for winter but thankfully we found a place to grab a tasty Gyro and get some energy to continue our walk. 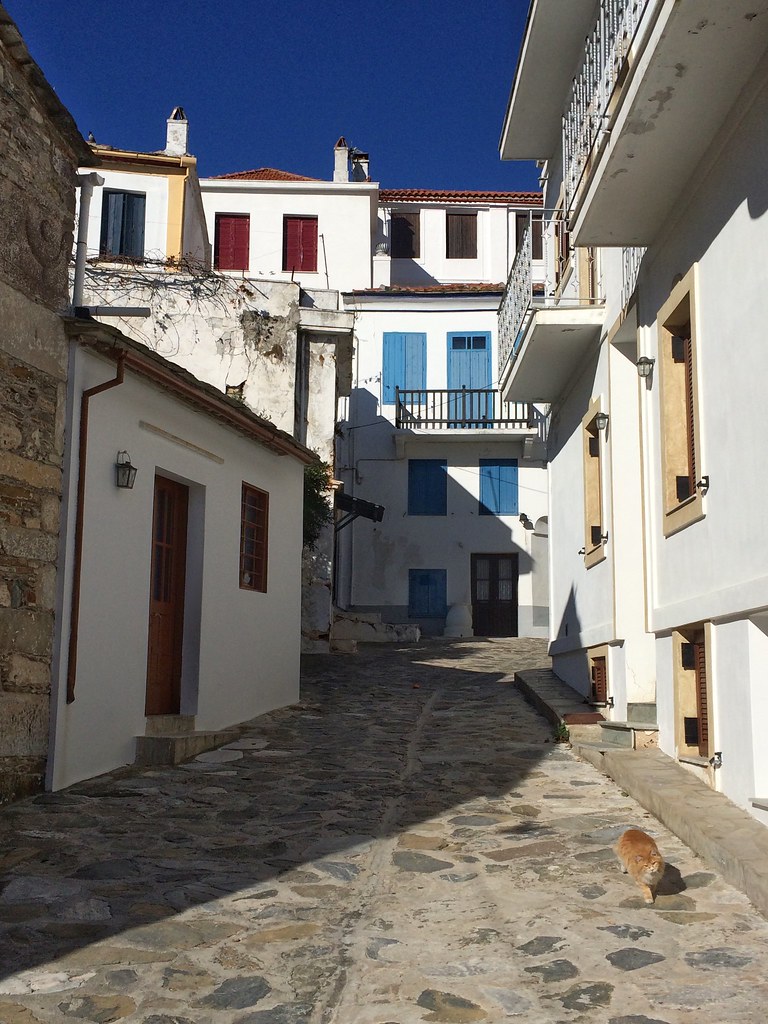 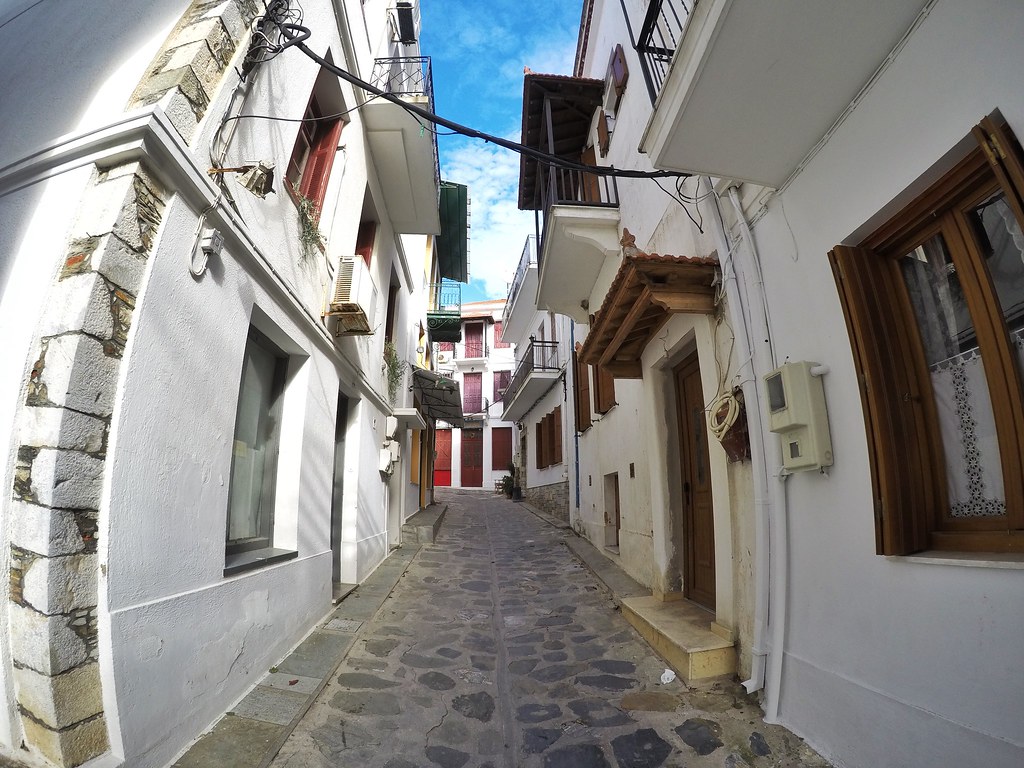 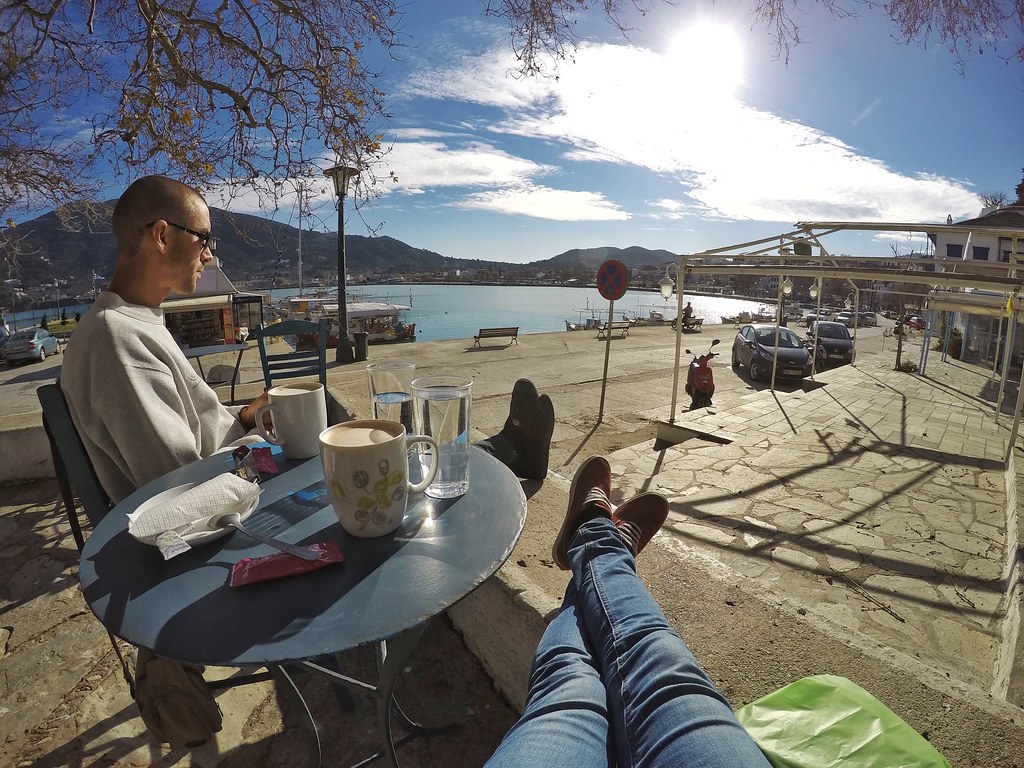 We visited the beautiful church of Panagitsa tou Pyrgou which sits on a rocky hill on the edge of the harbour. I loved how it was all white, pure white, even the steps. So white that I think it must’ve been freshly painted. There were three sort of little churches at the top, with circular slated roofs and a stunning backdrop of the sea. The area around the church led off into a maze of white alleys, with stray cats, blue doors and orange trees. We ended up back at the harbour and overheard some delightful jazz music at a jazz cafe, of all places, and we couldn’t resist a relaxing coffee listening to some lovely music. Once our coffees arrived a continuous string of men on scooters chugged past and sort of muffled the jazzey vibe with rumbling exhausts. 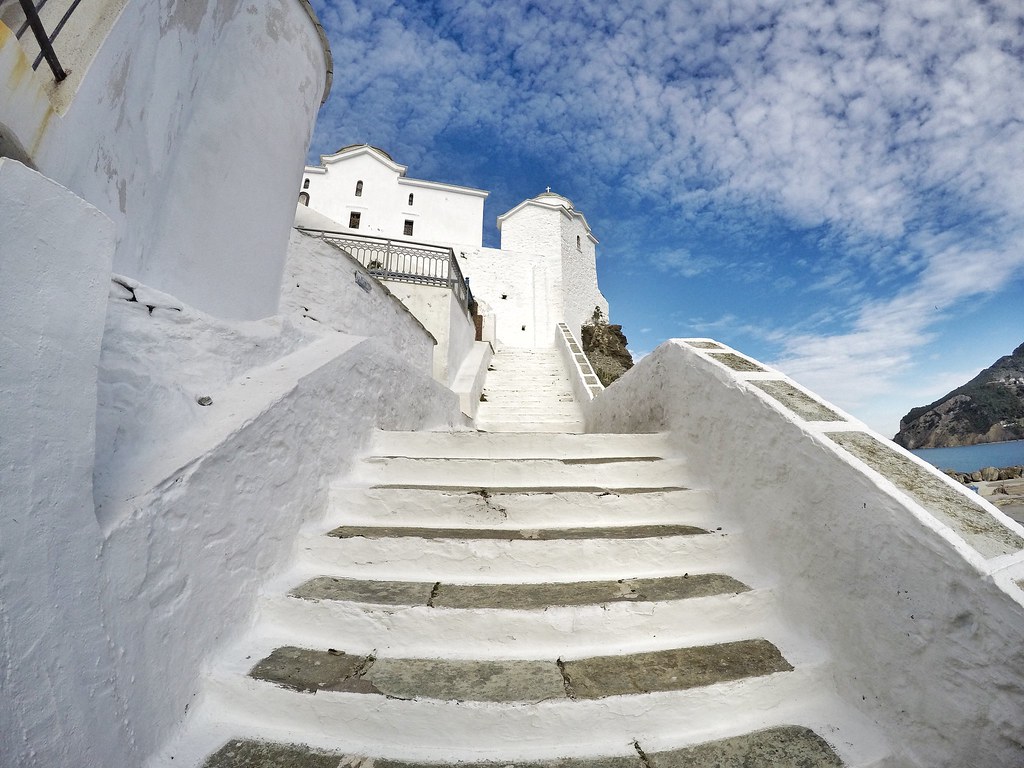 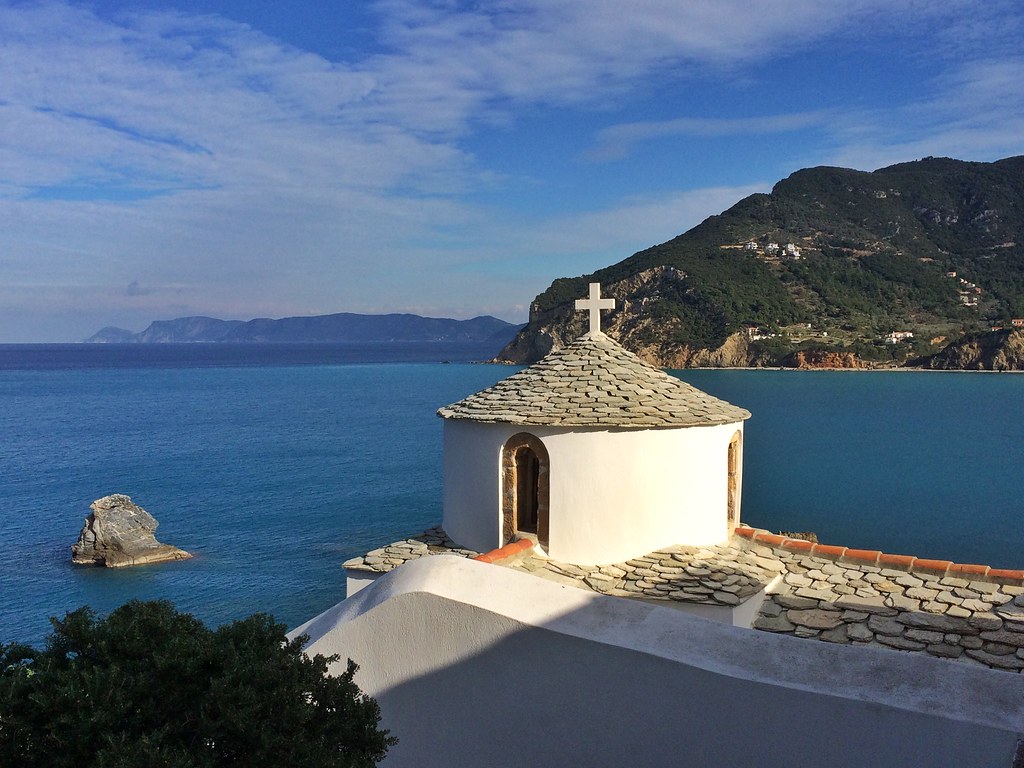 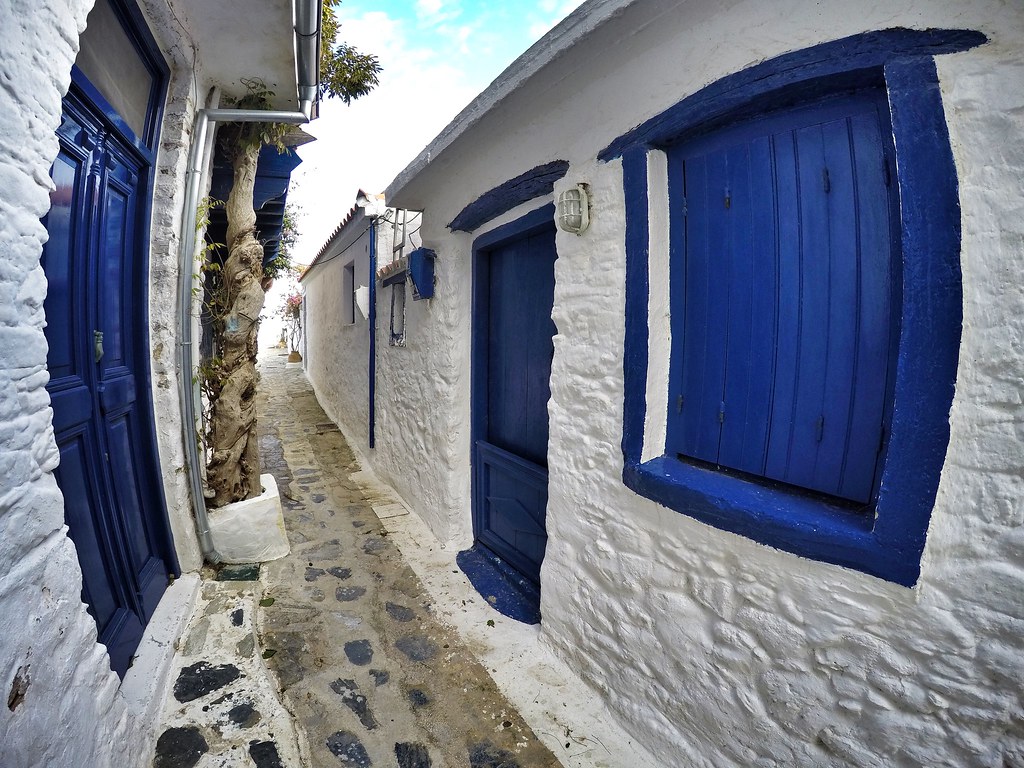 While in Skopelos we wanted to visit a big supermarket, we found a Carrefour, put a euro in the trolley dispenser and headed in. It was as if the whole island had been warned of an apocalypse and everyone had already bought their supplies to survive. The aisles were empty, bar the odd item. It was bizarre; two aisles contained just bottled water and another was fully stocked with sanitary towels. So we had to do the most awkward walk of shame past the two bored employees, with our empty trolley and go and collect our euro back. Thankfully the next shop we visited was fully stocked and we could actually buy some cheddar cheese which was rather exciting for us Brits. 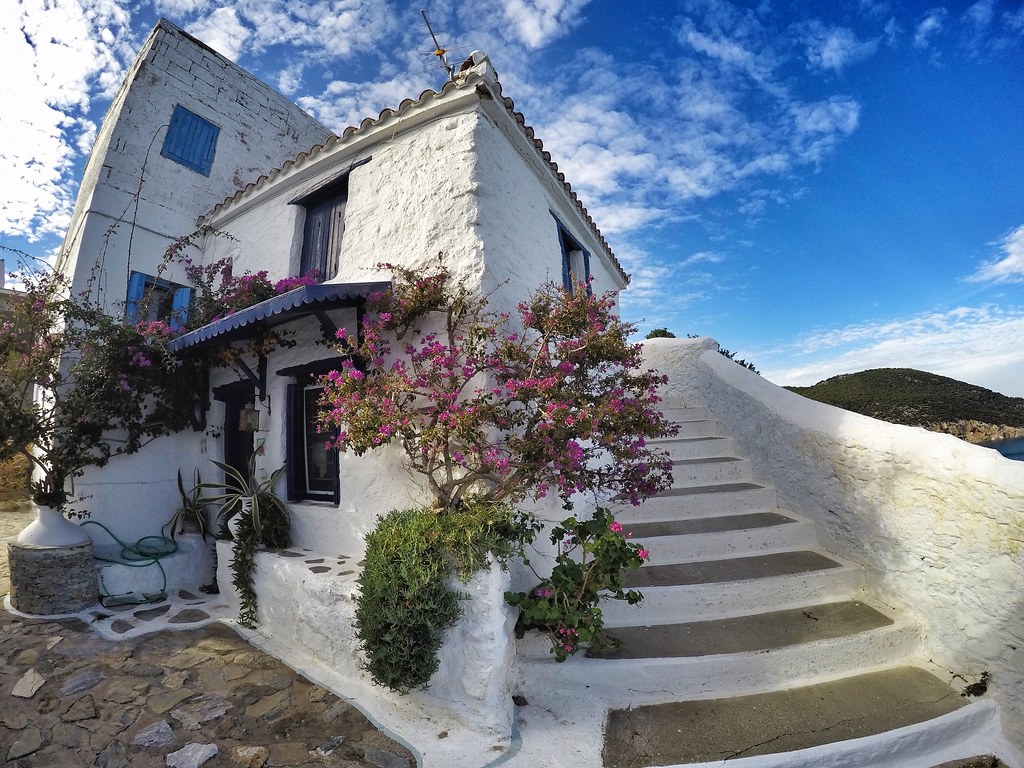 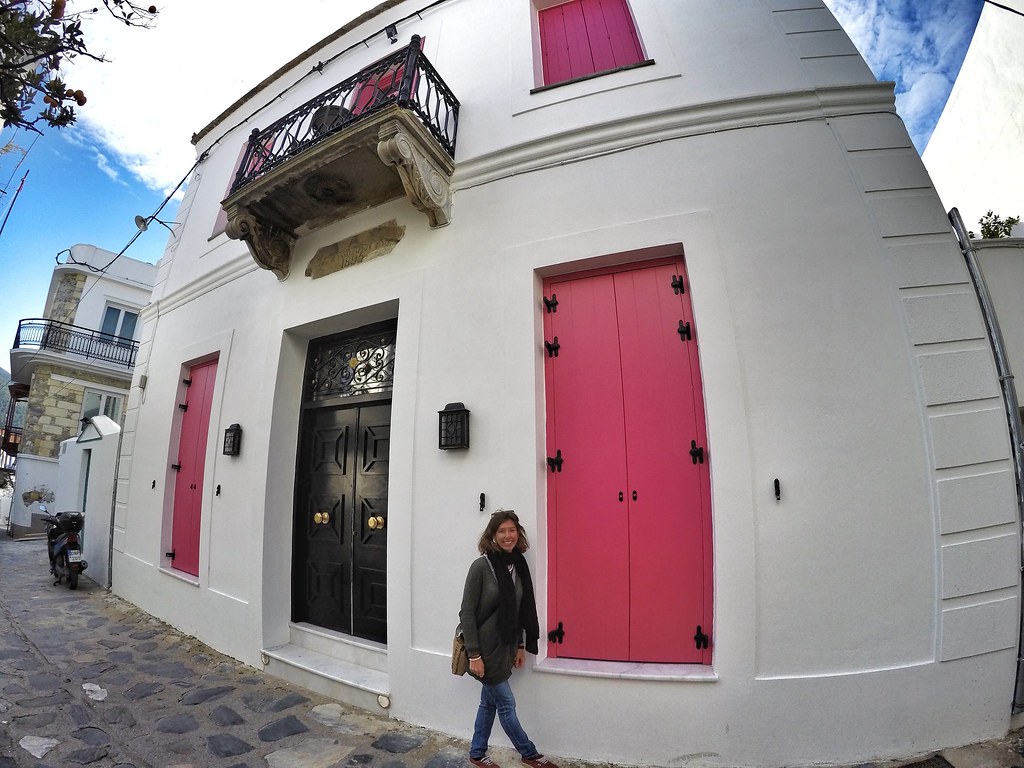