Skopelos island was used as the filming location for the hit movie Mama Mia. I absolutely detest musicals, I hate that moment where they feel the need to change from conversation to sing song. So, we’ve never actually watched the film but when we started researching the island we’d be living on for two months we discovered it was a popular spot for fans.

Regardless of its fame-card though, we wanted to visit the little church sat atop a rocky sort of island in the sea. It’s name is Agios Ioannis Kastri but it’s often referred to as the Mama Mia Church. When we told our host we were planning to go there he told us some interesting bits about it. The church in the movie was actually a fake one built around the original, so it was more prominent on the cliff top. Apparently lots of fans are disappointed as it’s tiny inside – the wedding scene was filmed in an entirely different church. Lots of locals were hired as extras and were rather annoyed after being filmed repeatedly running up and down 200 steps to the church in the scorching sun only to find the whole scene was cut from the movie! When the locals went to the cinema in Skopelos town to watch the film it was played on two separate tapes, the old fashioned way, and every time a local was spotted on the big screen the crowd would cheer. They also found it very confusing when the movie linked two beaches from opposite ends of the island and made it look like they were beside one another, the locals just didn’t get it “no no no, this is all wrong, that beach is on the east!” 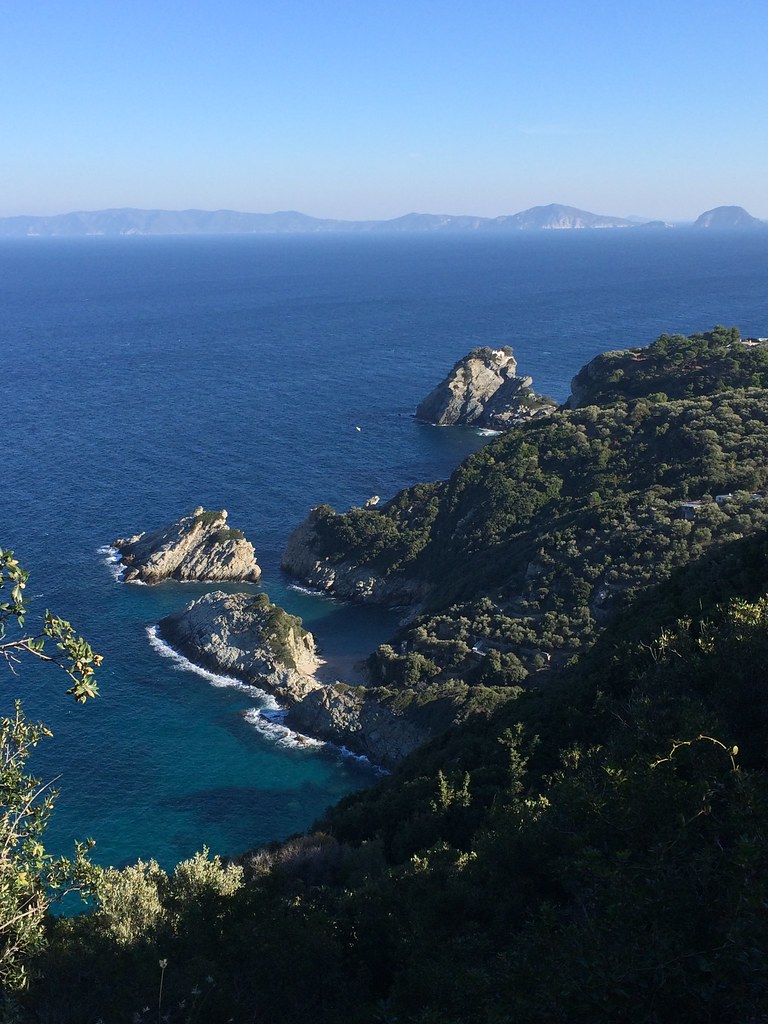 Anyway, we set off to check it out for ourselves. It was an hour and a half walk from Glossa Village and we followed a road the whole way. The road began to head downhill and a view across the western side of the island was revealed. It made the island seem very thin when we could see the sea on either side. It was such a quiet area and just one car passed us and a very old man who was about a foot shorter than me, carrying his farming tools up the road. We had lots of beautiful sea views on the walk with neighbouring islands and the wild coastline to the north and south of us. Then we got sight of the rocky outcrop we were heading to, it didn’t look far away but the road teased us and wound round the coastline like a snake. Big ‘U’ shaped bends took us amongst the forest and olive trees and back out again to the sea where we’d see we’d barely made any progress. There were layered lush green hills ahead of us and the sun was already dipping behind them by 2pm. By the time we reached the bottom of the rock the beach beside it was covered in shade so we didn’t even bother going there. 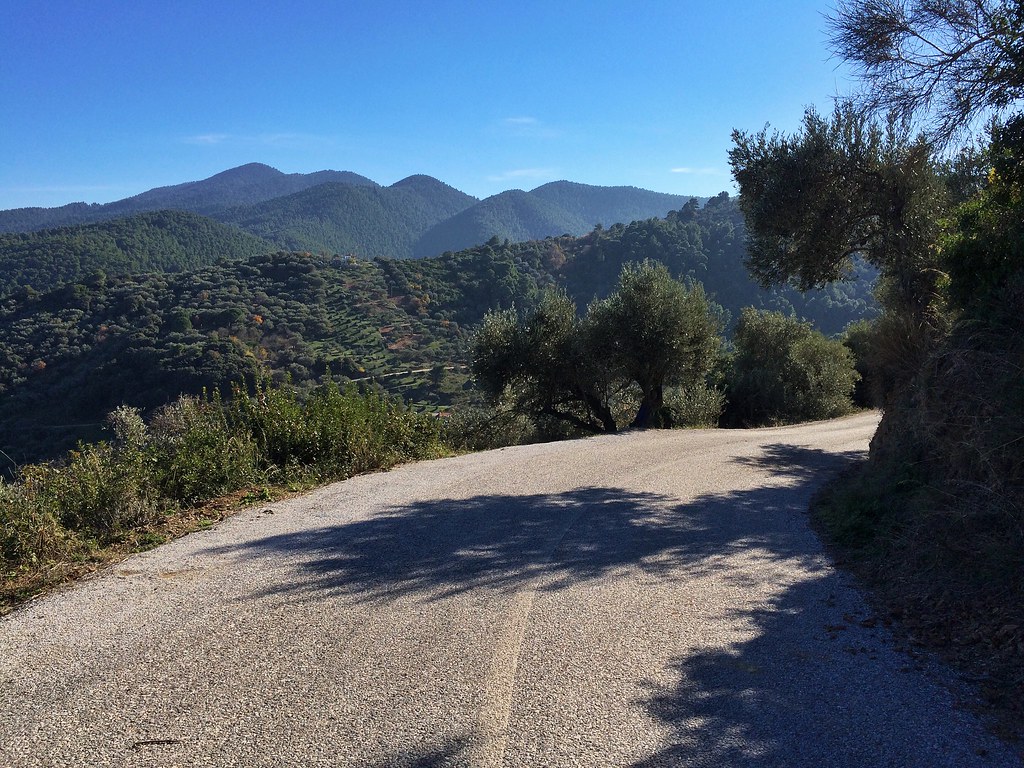 The rock had sea on either side of it; one area had sloshing waves while the other was a calm bay of crystal clear Mediterranean water. The little white church sat rather discreetly atop the rock where trees dotted the sheer edges. 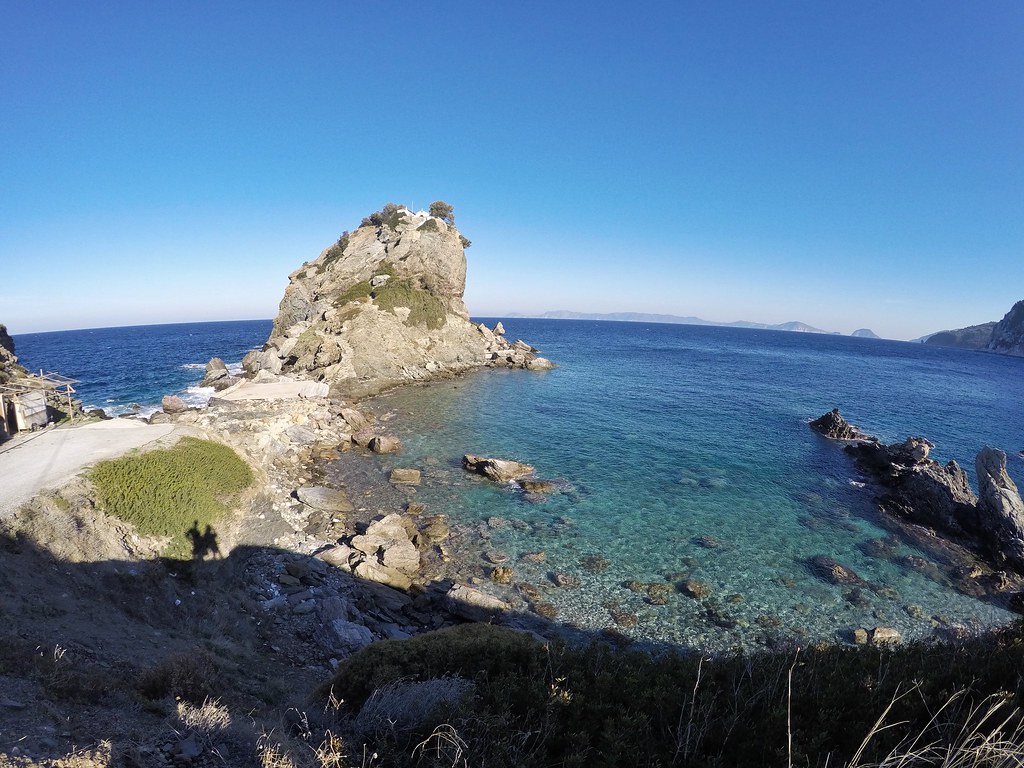 Just before we crossed a sort of manmade causeway two kittens scurried out from some bins. They clearly hadn’t seen any humans in awhile and didn’t want their chance of a potential snack to fade away, so they followed us like a bad smell. To my surprise they followed us up the 200 steps to the top! The steps were cut into the rock with a little banister to protect us from the drop offs. We reached the top and gave the bell hanging from a tree a big ding dong before wandering around the top of the rock. We stepped into the white-washed church and realised why most fans were disappointed when they arrived, it really was tiny. Paintings decorated the walls and a little table for incense sticks sat in the middle of the little room. At the far side of the rock and precariously close to the cliff edge was a little outhouse with just a square hole cut into the concrete floor which dropped down to the rocks and sea. I knew Greece still had squatter toilets but that was border-line Indian quality. 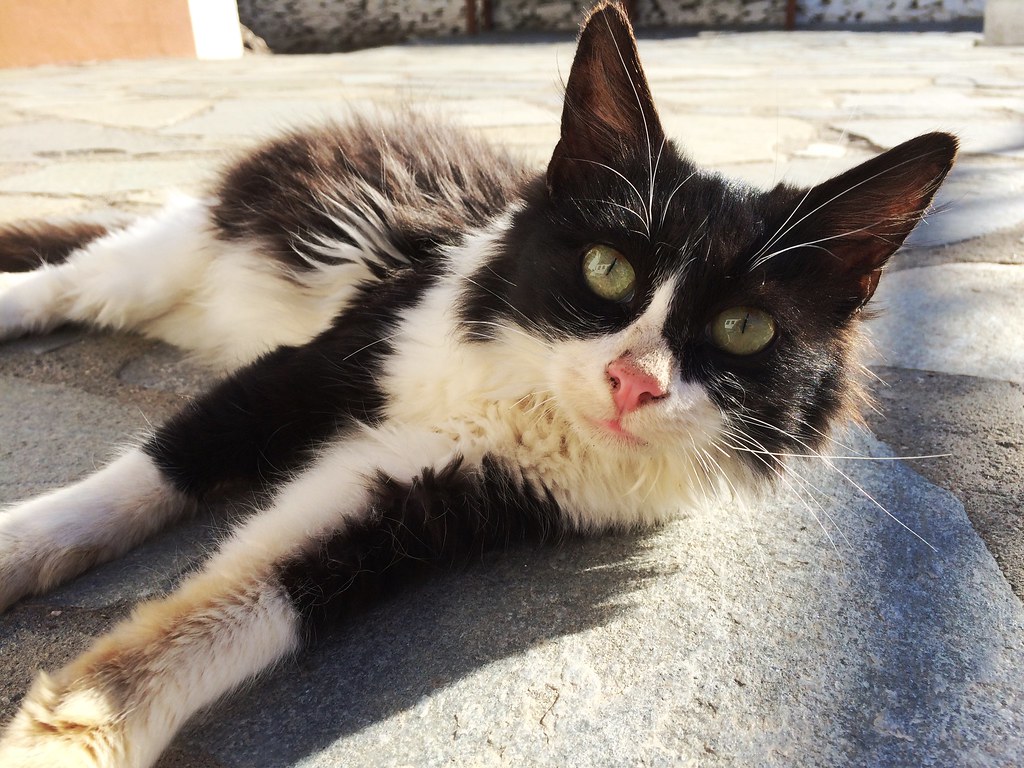 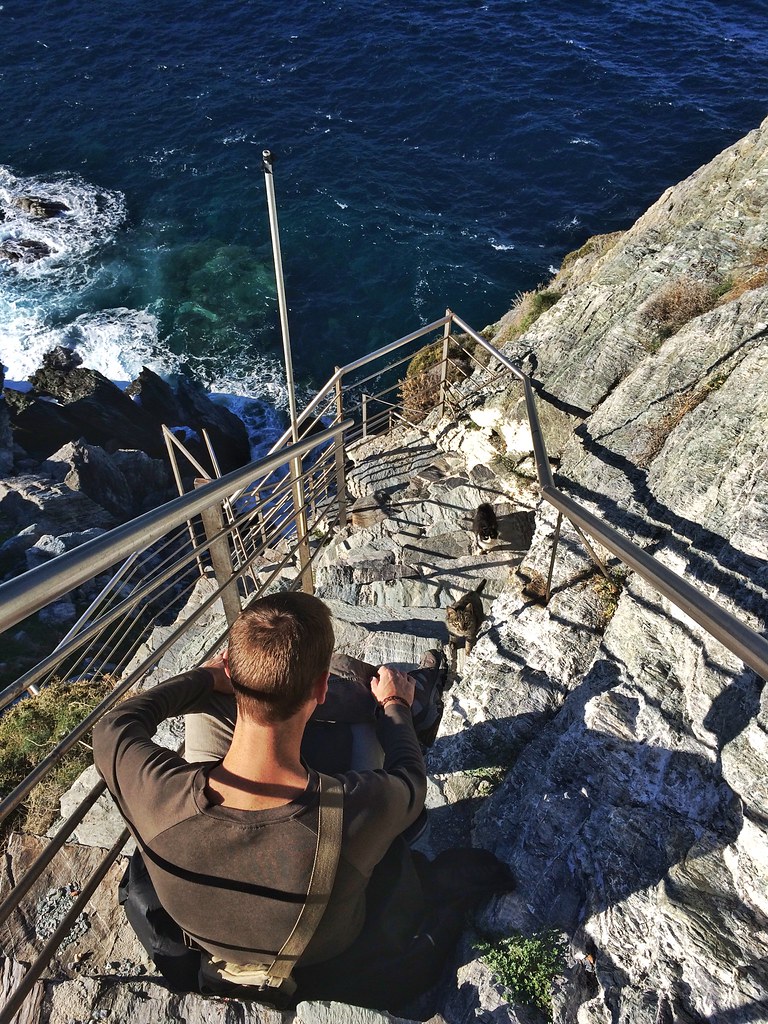 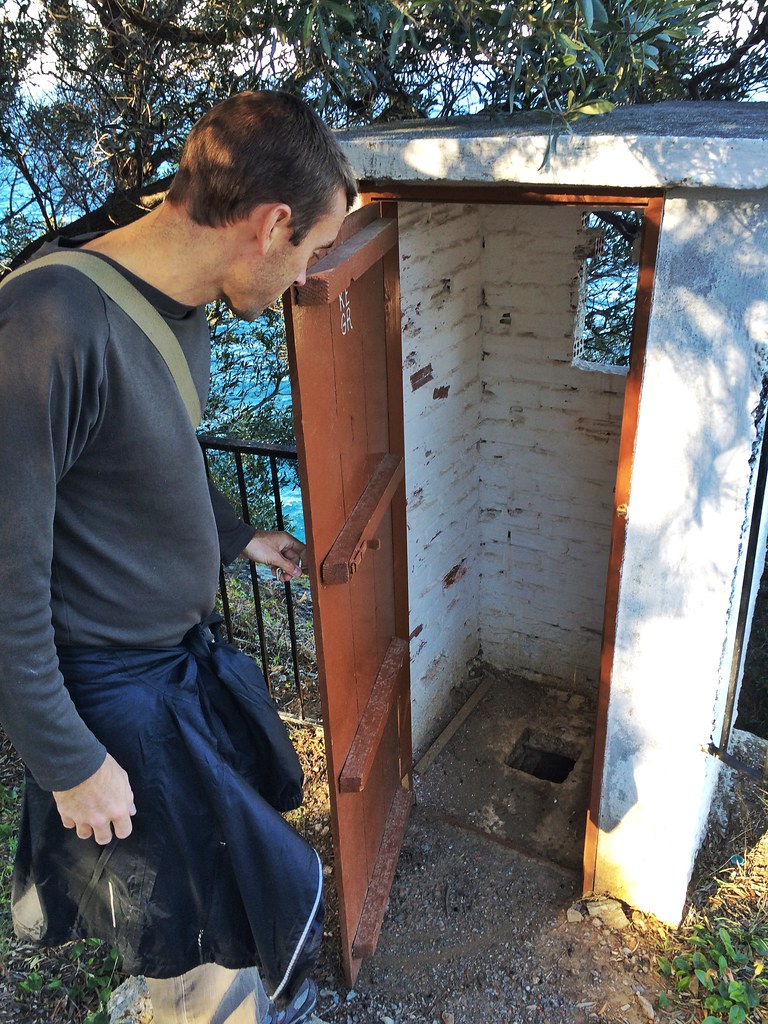 The views from the top stretched for miles across the Mediterranean Sea. The guardrail along the sheer edge almost collapsed as I gently lent on it so I carefully stepped back while the kittens lived life to the max and skirted along the drop-off. It was a lovely little spot to relax and we had to all to ourselves. The walk back seemed to take forever mind you, we were dragging our feet along the concrete road and the cats quickly realised we weren’t giving them food and certainly didn’t have the energy to escort them to a new feeding ground for the winter season so they headed back to the rock in the sea. 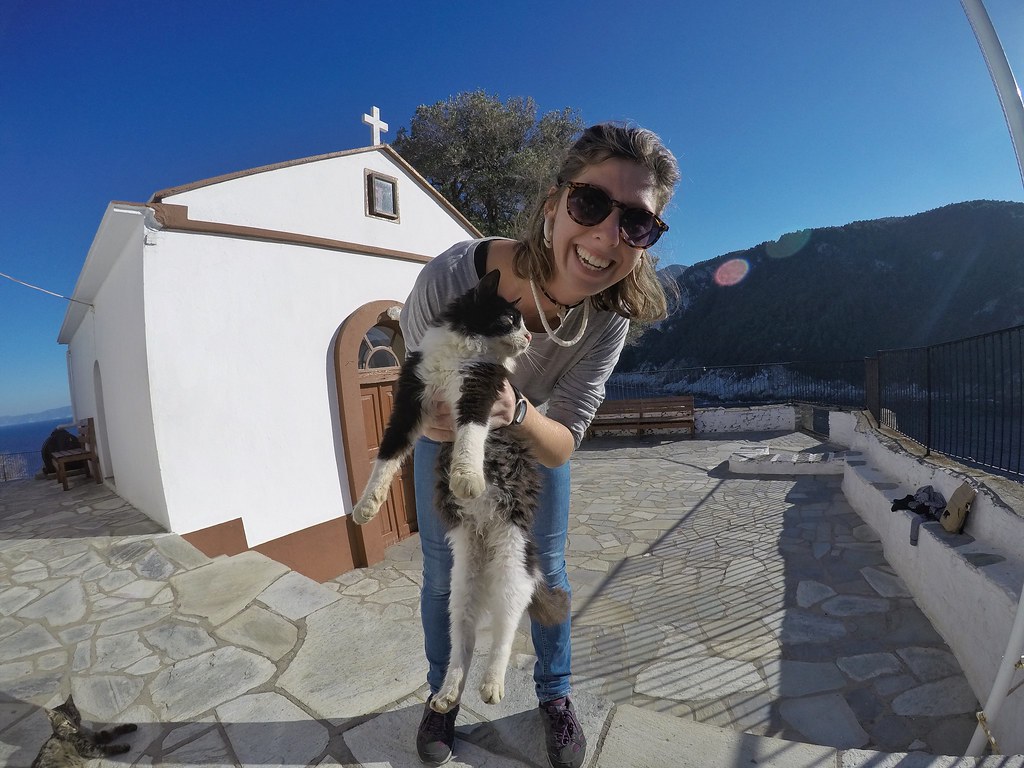 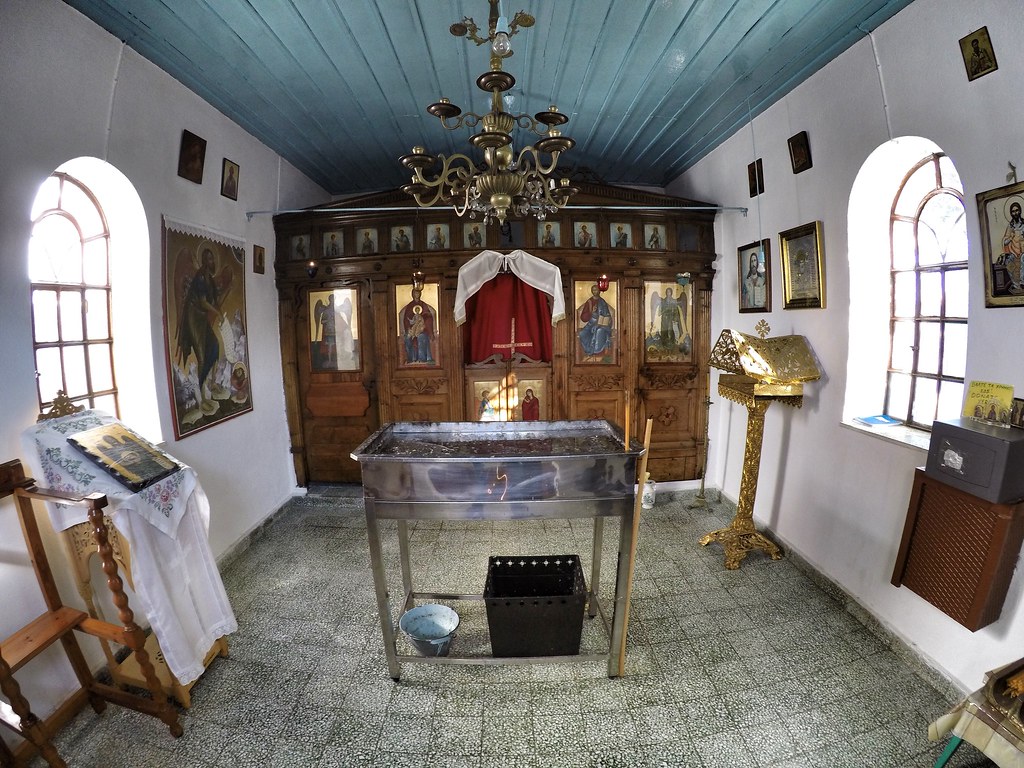