Our Airbnb host kindly offered to take us on a day trip for cheaper than the bus so we were happy to be chauffeured around. I think she enjoyed the company and it worked out well for us too. We headed north to Akumal which is home to a pretty beach with a calm, curved lagoon. The lagoon is a popular feeding ground for turtles and it’s free to visit, plus we had our own snorkels so it made for a very cheap day trip. The visibility was pretty poor but it did improve the further away we got from the beach. 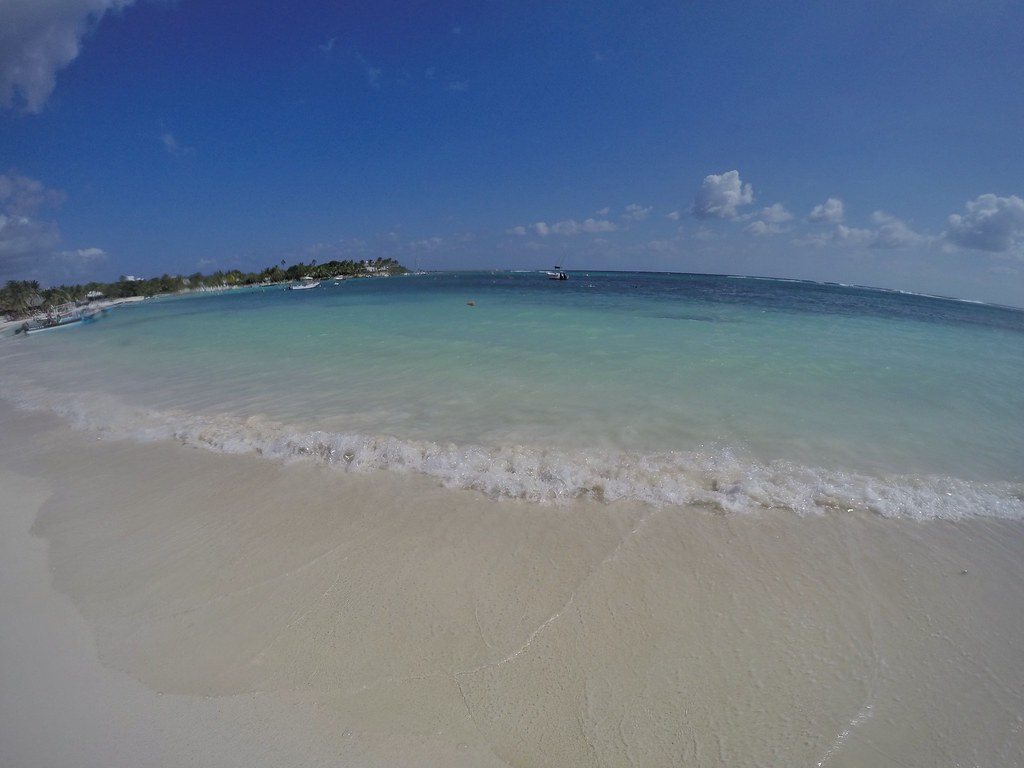 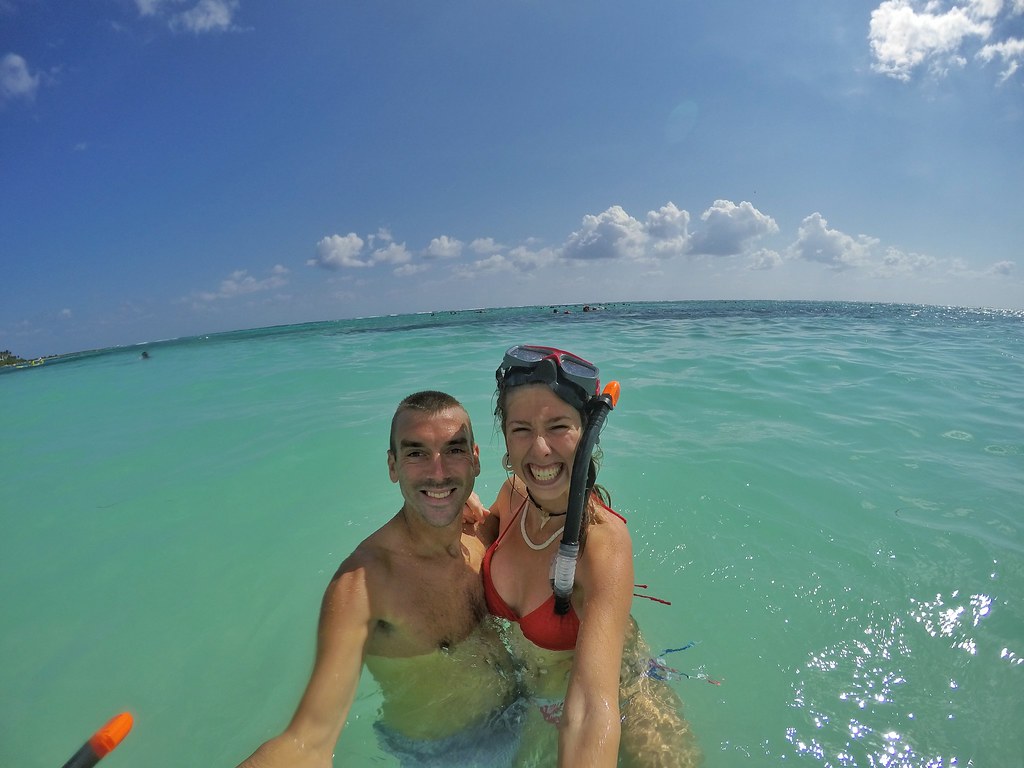 Cynthia, our host had warned us that when we reach the rope men will try and tell us we can’t go past it without a lifejacket and she said that we should just smile, nod, say thank you, and then swim under the rope. It was harder than we’d expected and they were persistent buggers. It’s the sea, it’s our choice if we swim without a lifejacket, it was just the tour company workers trying to cheekily get more business by saying it was compulsory etc. One man on a kayak just followed us and we had to try and awkwardly ignore him but every time our ears rose out the water we’d hear him calling out “amigos, amigos…” Craig actually swam right into his kayak and hit his head but he only told me that later and it really made me laugh. Then he called over another worker to try and tell us to get life jackets and we said ok and just swam side-ways along the rope as appose to back and they actually seemed to give up on us after that. We soon spotted a massive turtle eating the sea grass and then swimming up to the surface for some air. I’ll never get bored of watching turtles majestically swimming through the sea. I even like watching them eat as you can hear them chomping away which I find quite cool. 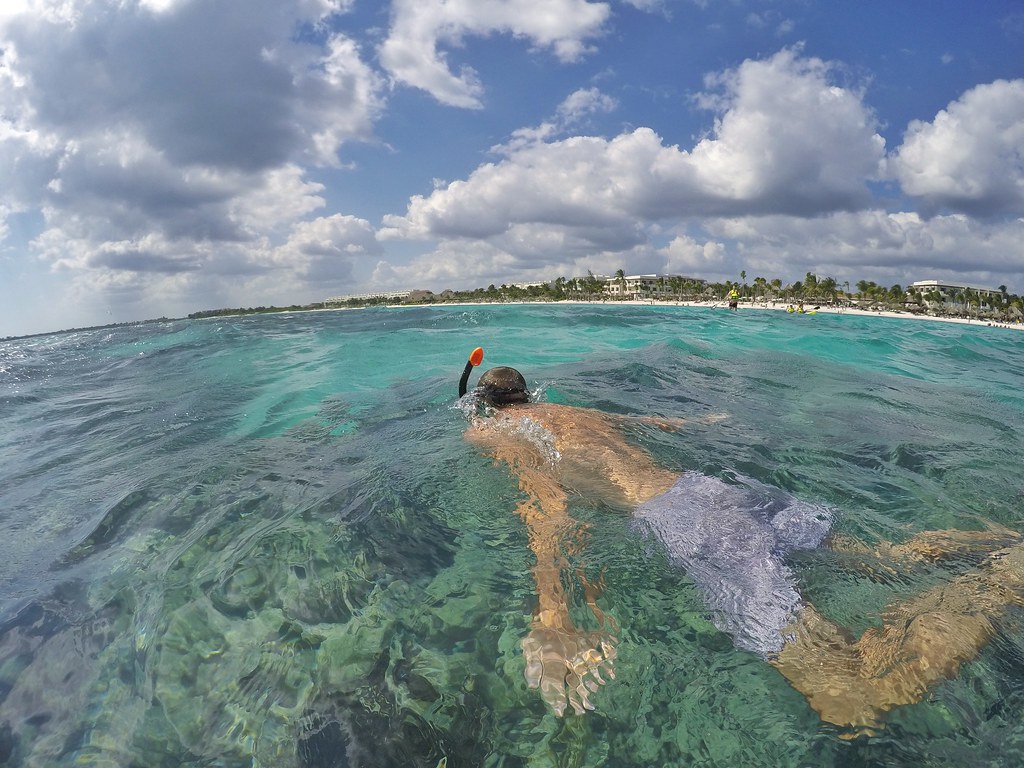 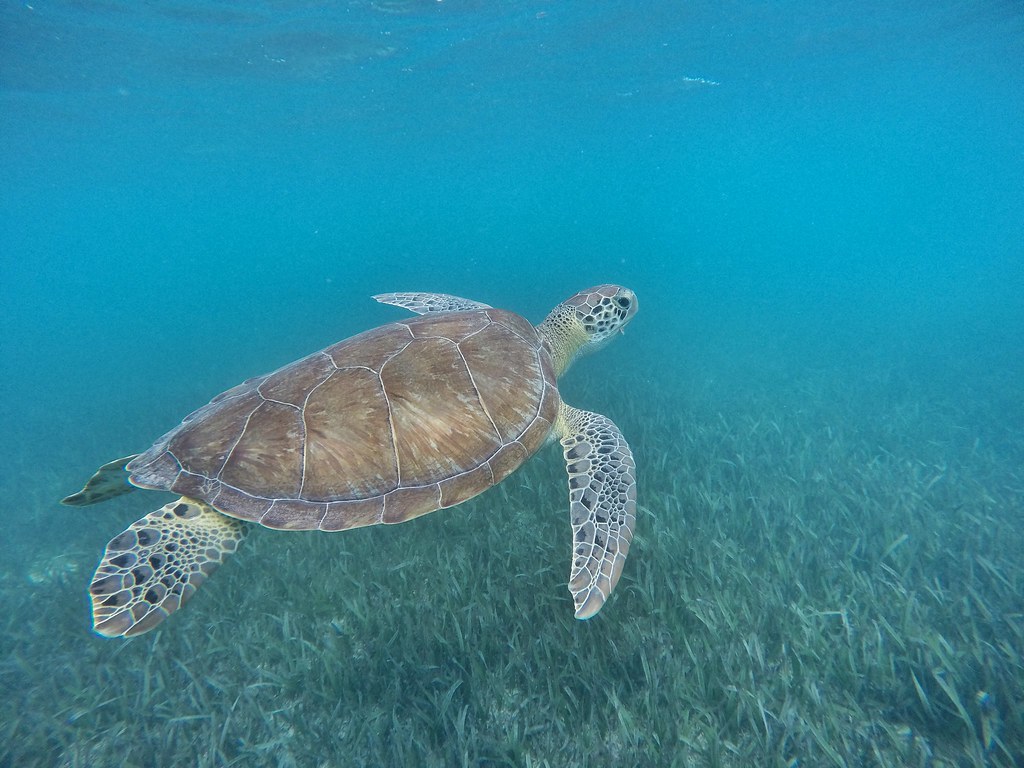 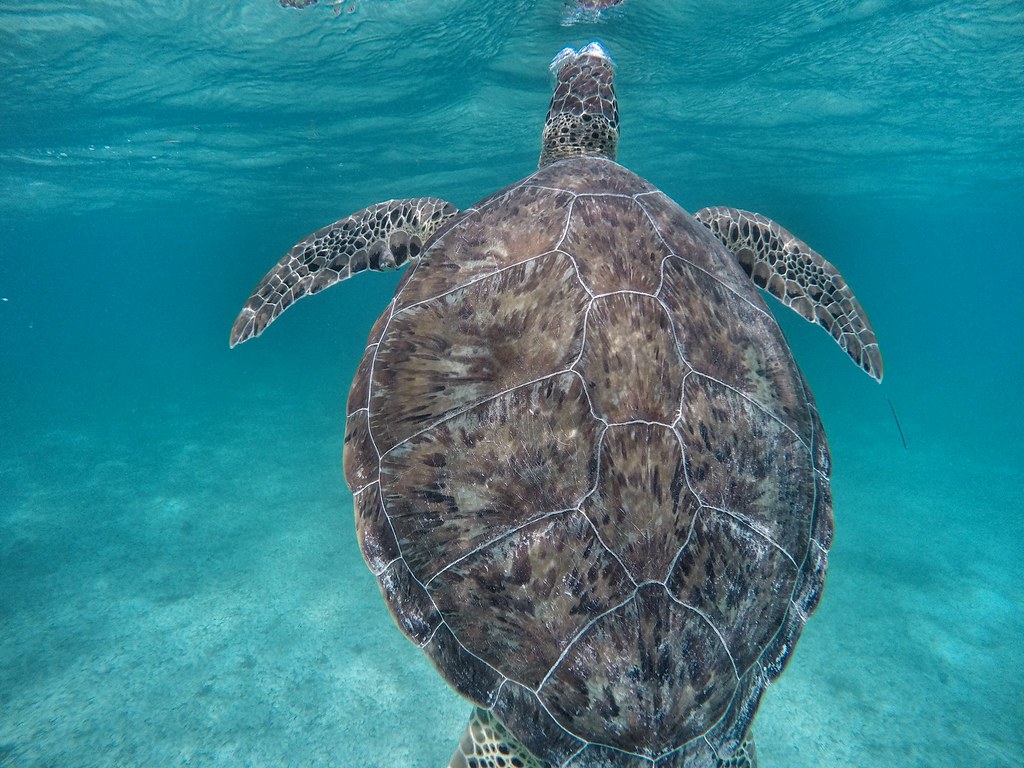 We saw a pretty big stingray gliding along the sand, it had a barbed tail over a meter long and Craig was going to dive down and film him which is exactly how Steve Irwin died, so we just admired the beautiful animal from the surface instead. We swam over to the ‘reef’ which was bleached and lacking any life, as seems to be the case with most reefs these days. There were a few fish but nothing riveting, luckily we saw a few more turtles on the way back so it was a successful trip. 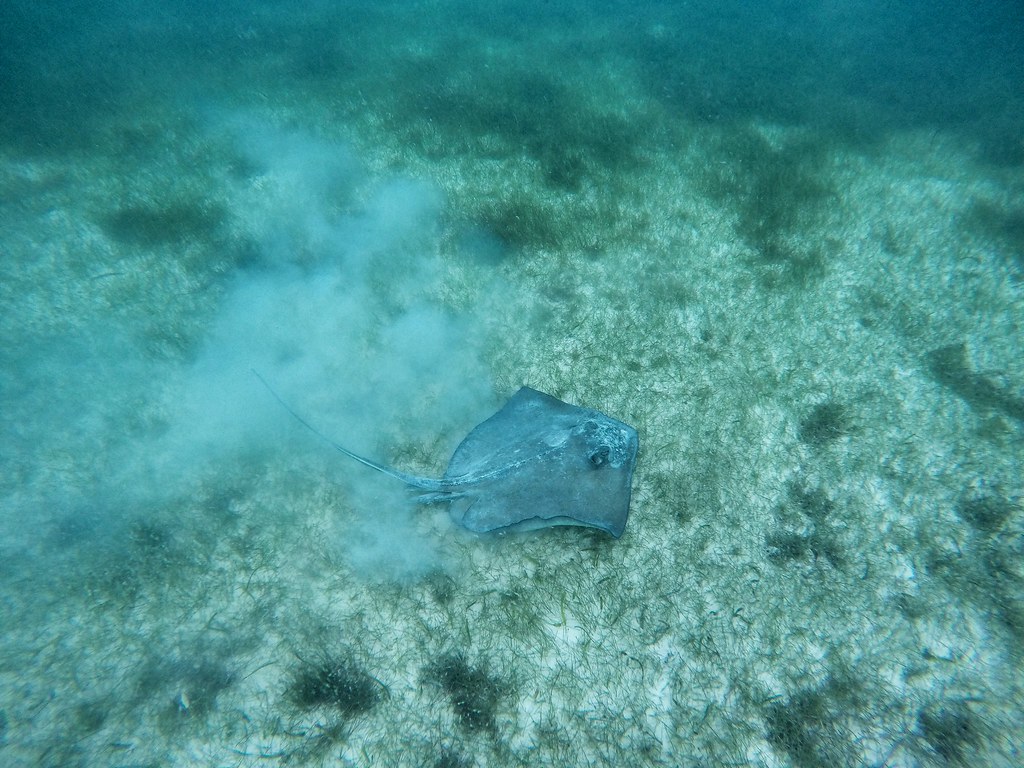 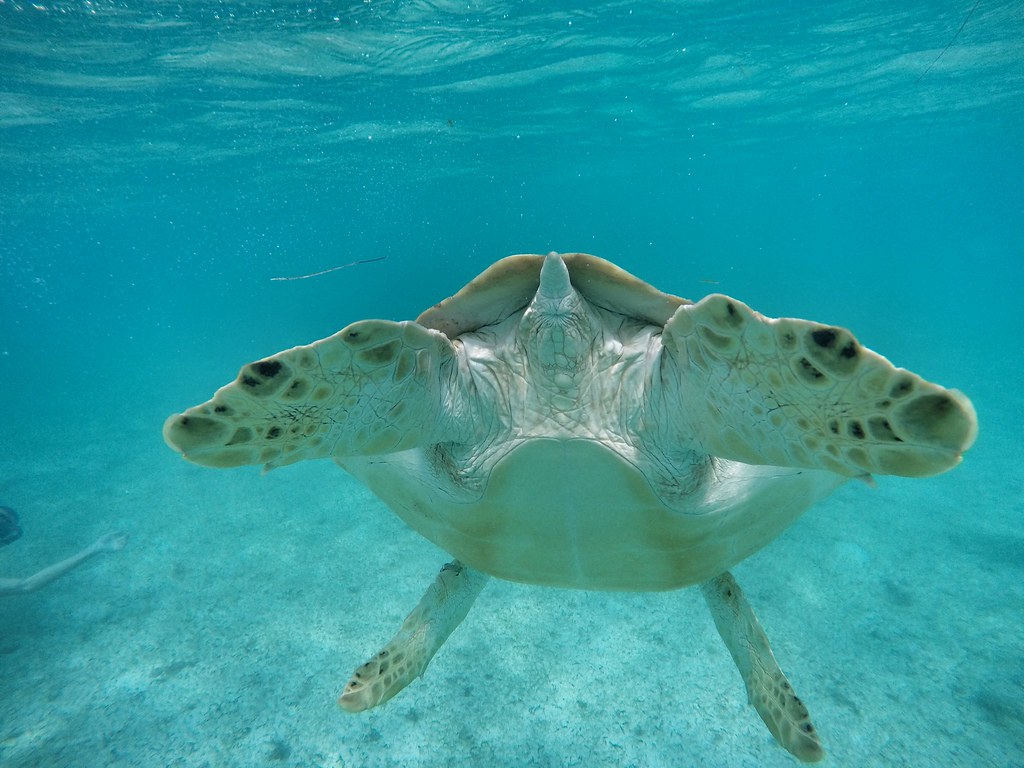 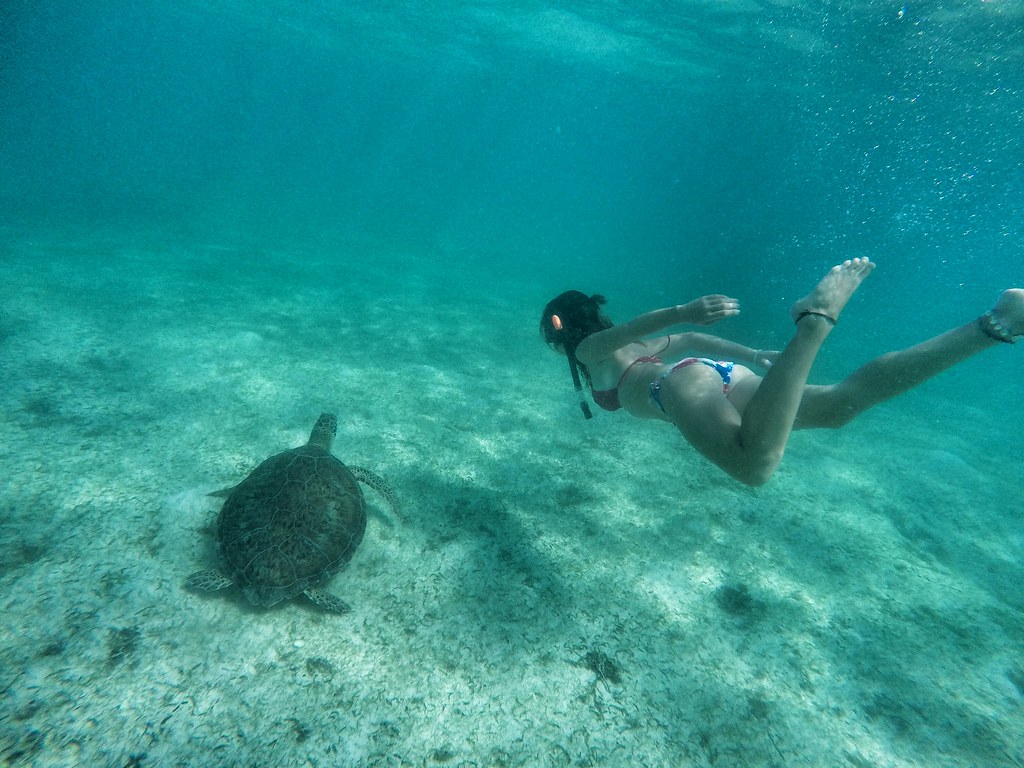 We joined Cynthia for a drink at the bar and then headed back towards Tulum. She took us to a really cool place called The Temple Of Positive Thinking. She said only locals know about it and no public transport goes there so it was quite a cool place for us to visit. The temple was a man made sort of frame-work pyramid slowly being covered with jungle foliage. It was an interesting sight and Cynthia said we had to write a positive thought down on the paper provided and then put it in one of the plastic bottles that were piled up in a crate. We followed the steps up to the middle of the temple and we’re delighted to see it filled with plastic bottles, and of course positive thoughts. It was a genius way to encourage people to recycle. 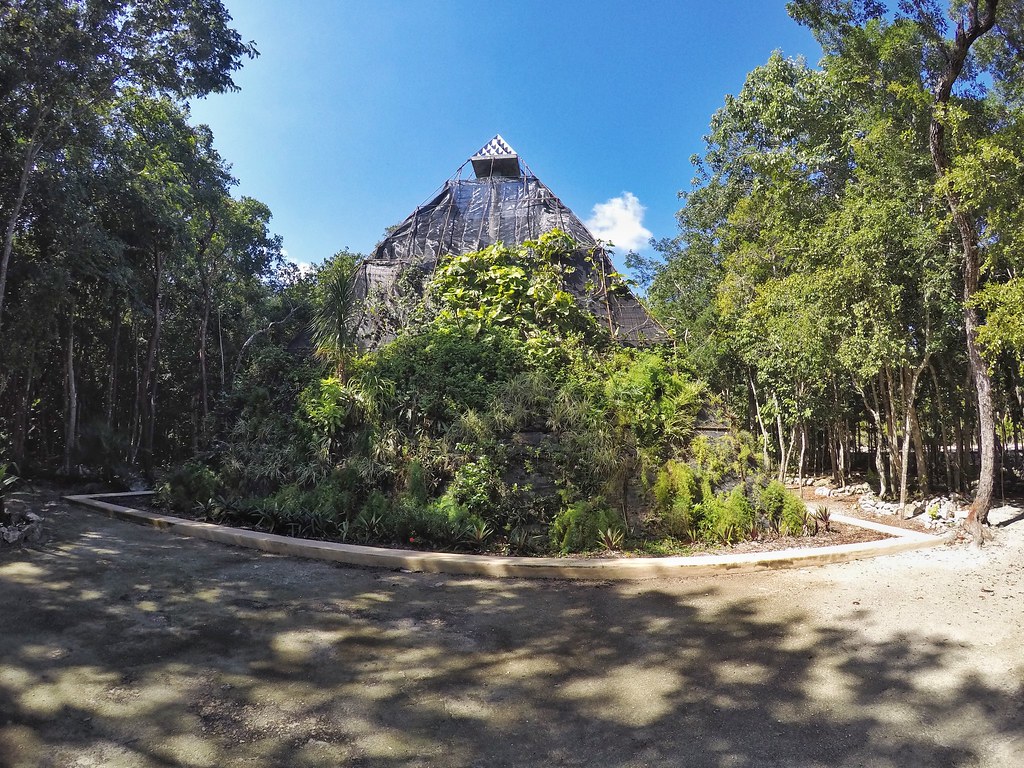 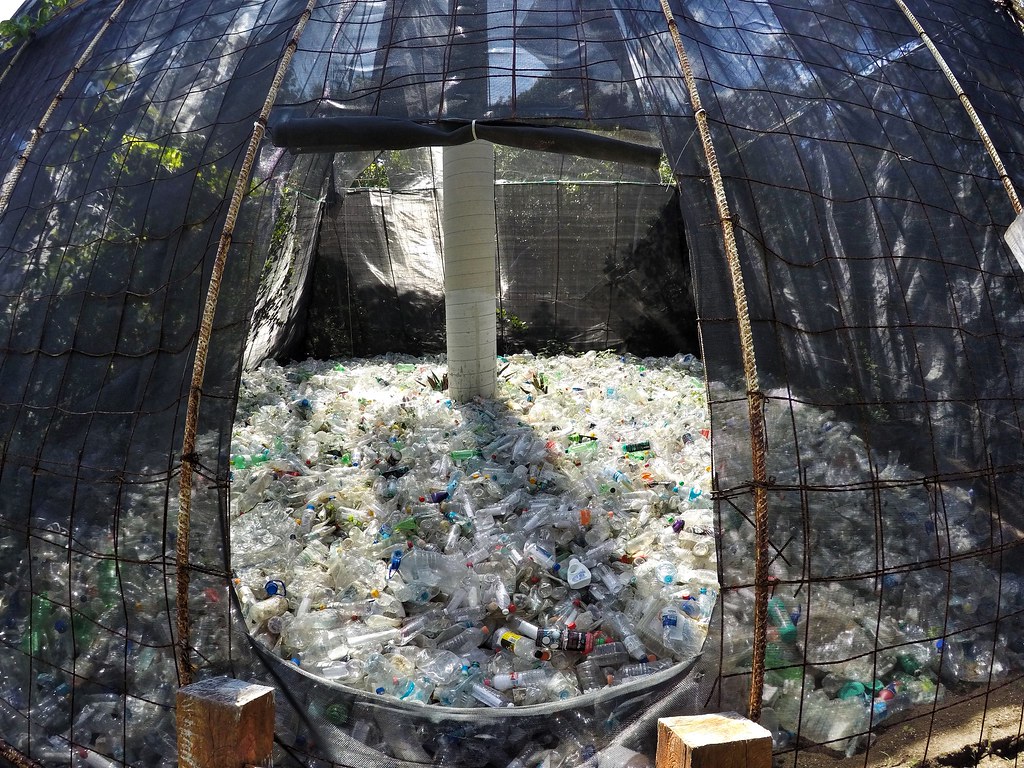 She then drove us along the beach road where we ate tacos at a place who’s slogan was ‘relax and eat some fucking tacos’. It was a super busy place right on the beach, busy because it was the cheapest place to eat on the beach but still 2-3 times more than the town prices. The sea was pretty wild and choppy but still had a beautiful blue hue to it. 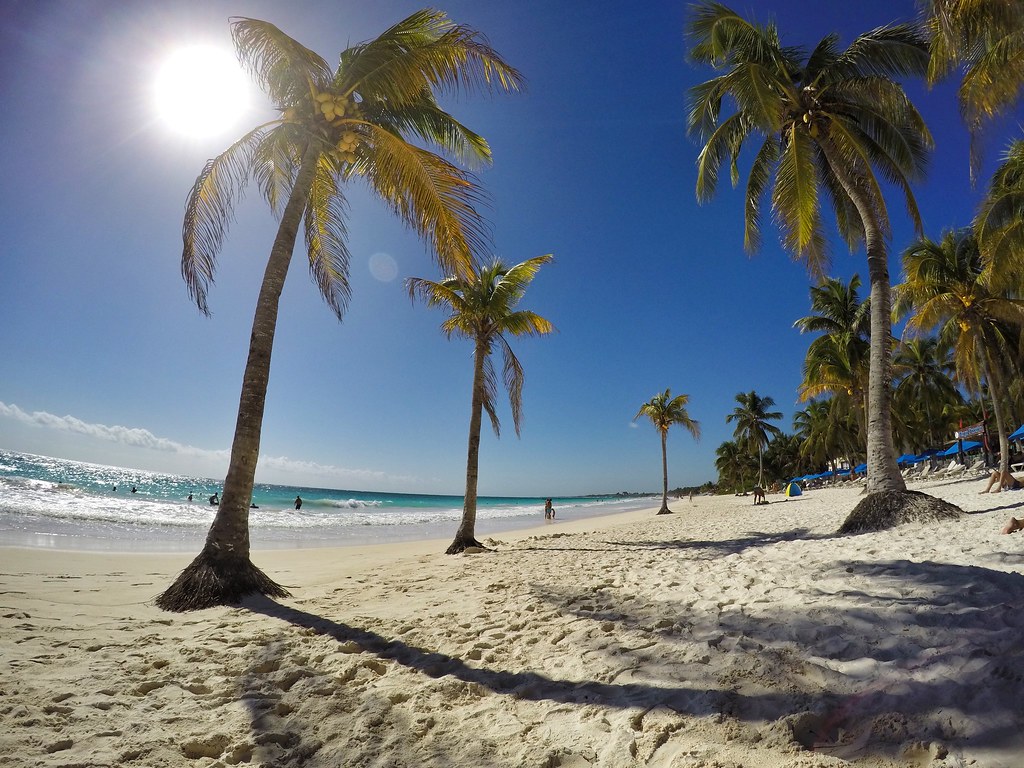 We visited the beach a few times on our trip and we’d always get the collectivo to the ruins and walk a couple of kilometres to the beach. From there it was flip flops off and a wander along the pure white sand till we found a perfect spot on the beach. The sand was so white that it wasn’t even hot to walk on and actually felt cool. We walked down to Paradise Beach one day which was a stunning area with curved palm trees stretching towards the Caribbean Sea. Once we were swimming in the water and past the area where sand was churning up, the colour and clarity of the water was fabulous and I couldn’t shut up about how much I loved it there. One day a group of fish were fighting over some food really close to us, Craig had actually had a sore impact on them when he rode a wave in and now they were right by us. A shadow went over our heads and we realised two big birds were eyeing up the fish, then they swooped down and we practically had to do a goal keeper dive out of their way. 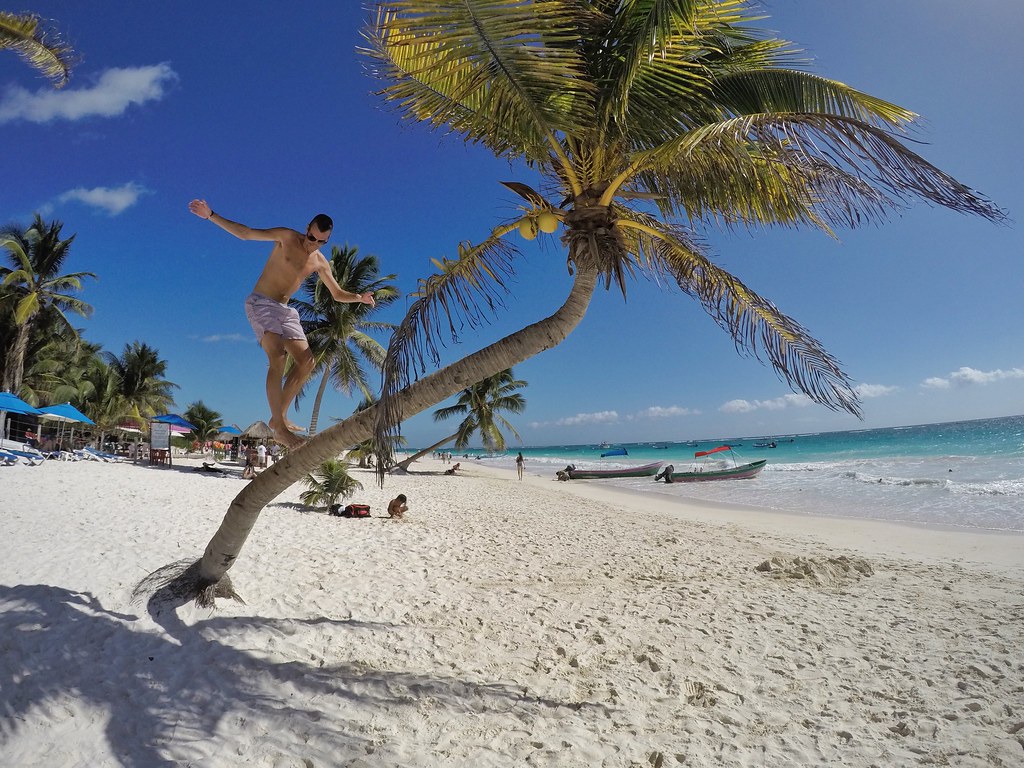 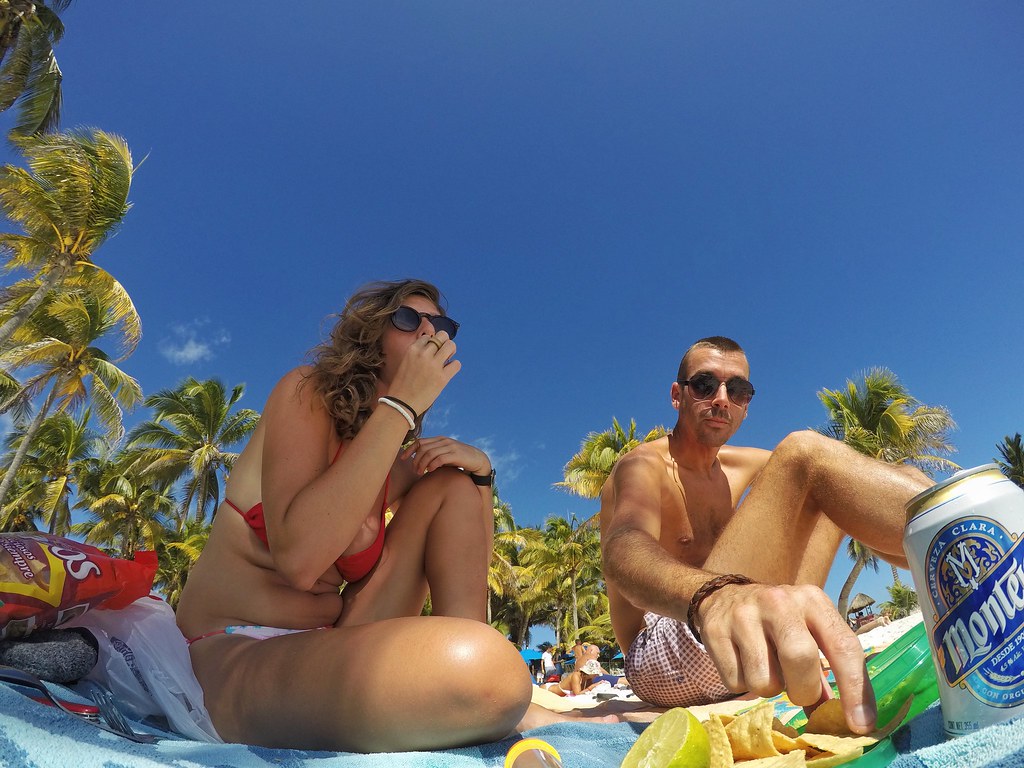 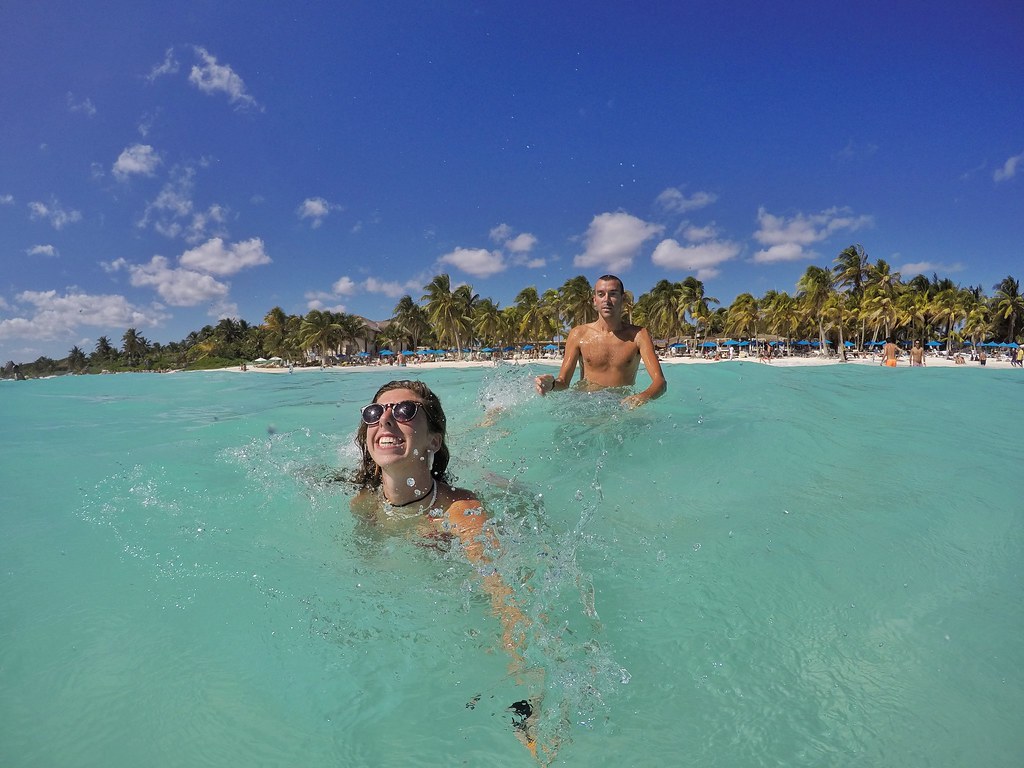 After 9 days in Tulum it was time to leave and head back to England for 12 days before our flight to Greece. We are both very excited about seeing everyone and eating delicious home cooked food after 11 months abroad. We treated ourselves to a Starbucks coffee once we reached the airport and decided for a little giggle to give a fake Mexican name and in a split second I came up with Pablo. Much to my annoyance the coffee barrister called out ‘latte’ instead of Pablo and it was written so messily that it looked more like Pubic. Adios Mexico! 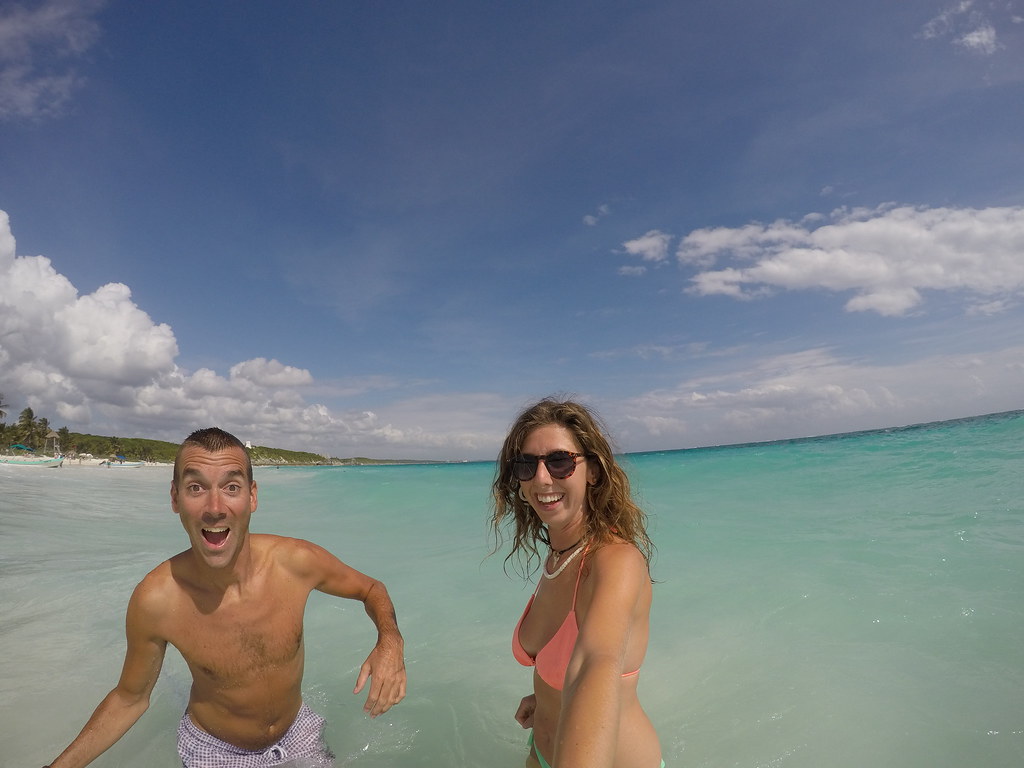 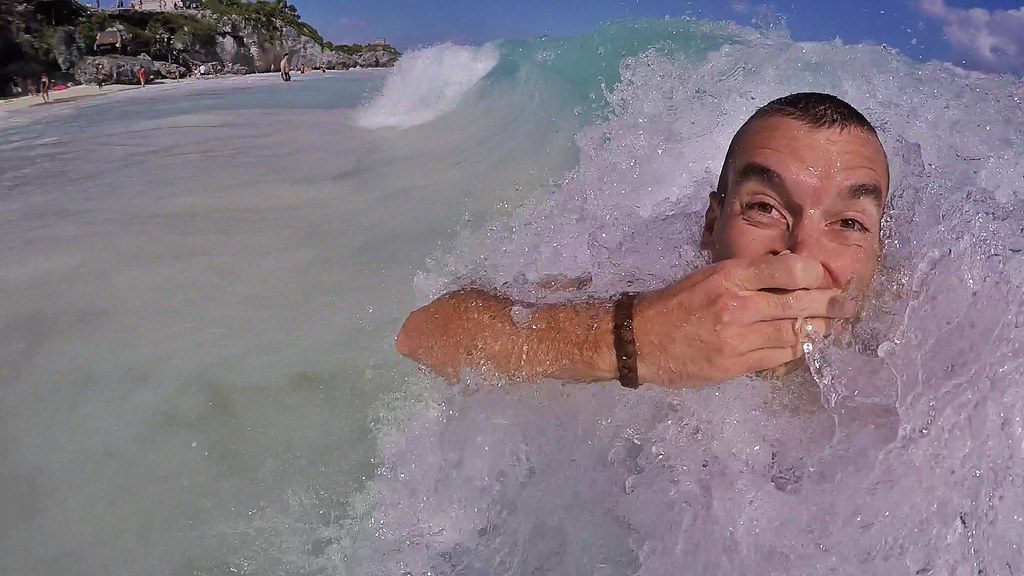