The first day we went surfing in Maui we lasted a mere two minutes before a lifeguard on a jet ski zoomed past telling everyone to get out of the sea as a shark had been spotted. All of the coast around our Airbnb house and surf board rental place was closed for the rest of the day and apparently it’s quite a rare occurrence for that to happen. Our Airbnb host laughed and said how stupid it was how they close the beaches. She told us a great trick to find out if there’s shark in the water, “Dip your finger in the water and taste it, if it’s salty then there’s a shark nearby”. She even spent one thanksgiving saving a small tiger shark that had beached itself.

When we finally went surfing it was worth the wait as we hadn’t tried it out since, let me see…2011 in Nicaragua! The waves were very tame but easy enough for us to ride. It was good fun and we picked it all up again just like riding a bike. We were given booties at the rental shop which we figured would be pointless, oh how they were needed! The sandy floor was riddled with sharp rocks like hidden land mines, it was quite a challenge walking out through the shallows and even riskier when we fell off the board onto the rocks. On the plus side we were sharing the waves with turtles and it was so sweet. Slightly unnerving at first when you suddenly see a dark shadow beside you and know sharks live nearby, but then a cute turtle pops his head up and swims past you! Craig even had to dodge one that was riding the same wave as him. 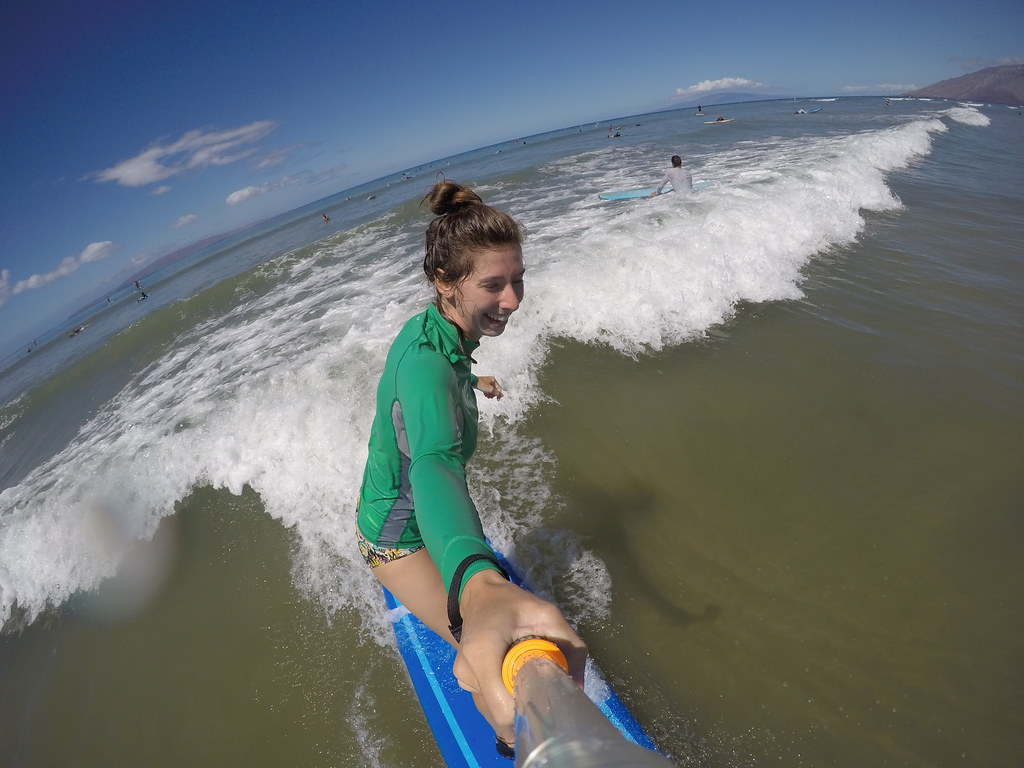 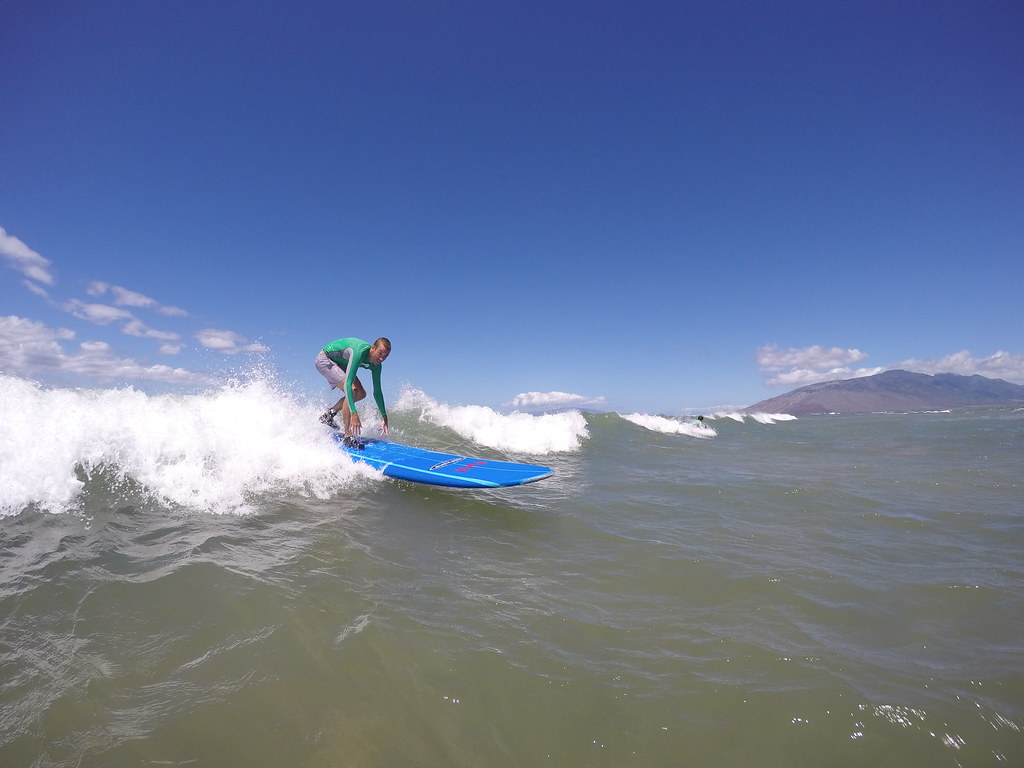 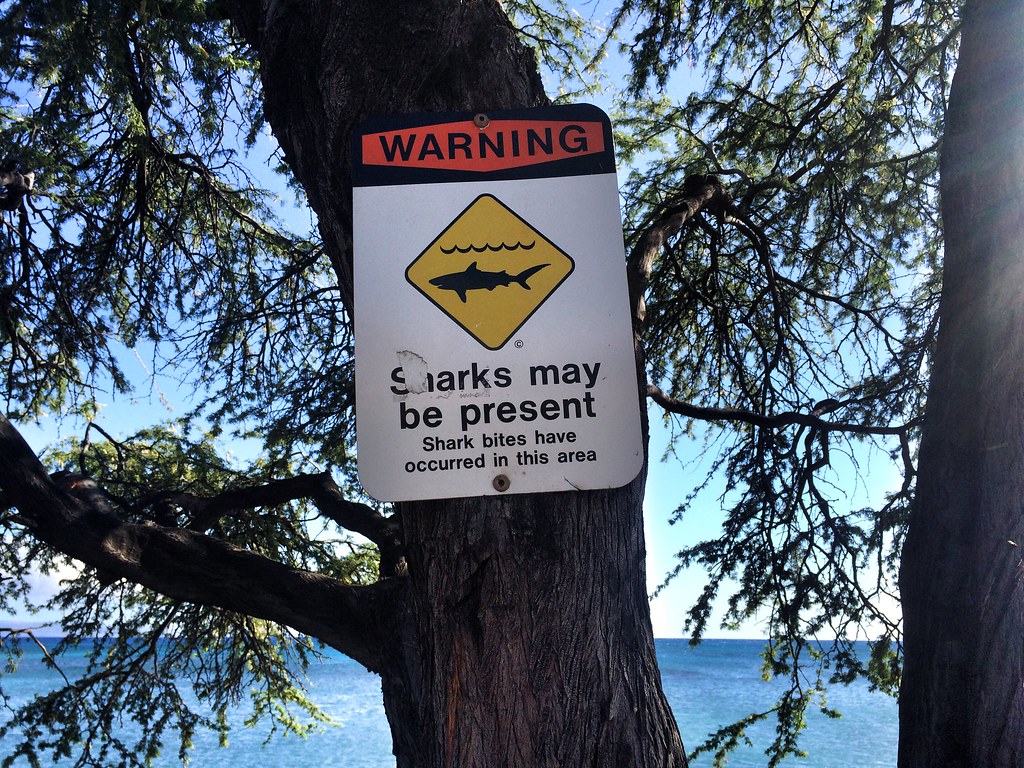 Most of our evenings in Maui were spent either at the beach watching the sunset or chilling on the Lanai drinking cocktails and watching our resident lizard serenade a lady lizard by revealing his giant red neck. We loved the vibe in Kihei, it was super chilled, everyone we passed said hello and we had more conversations with strangers in the first 24 hours of being there than we did in our entire 3 months around Asia. They just love to spark up conversation! 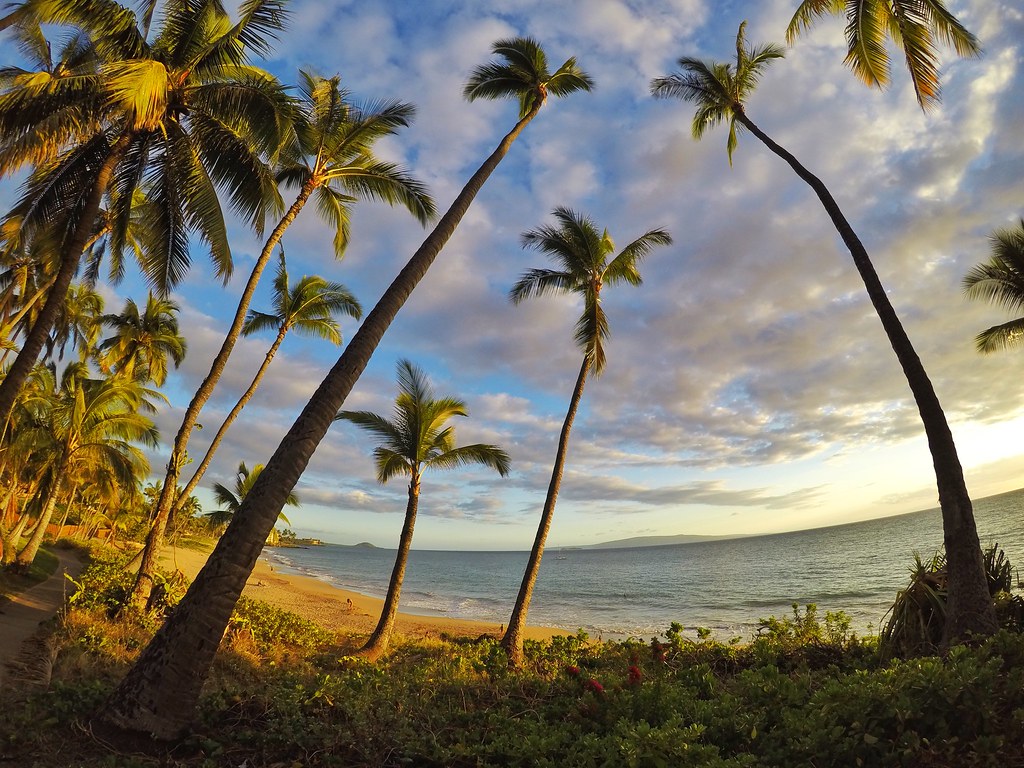 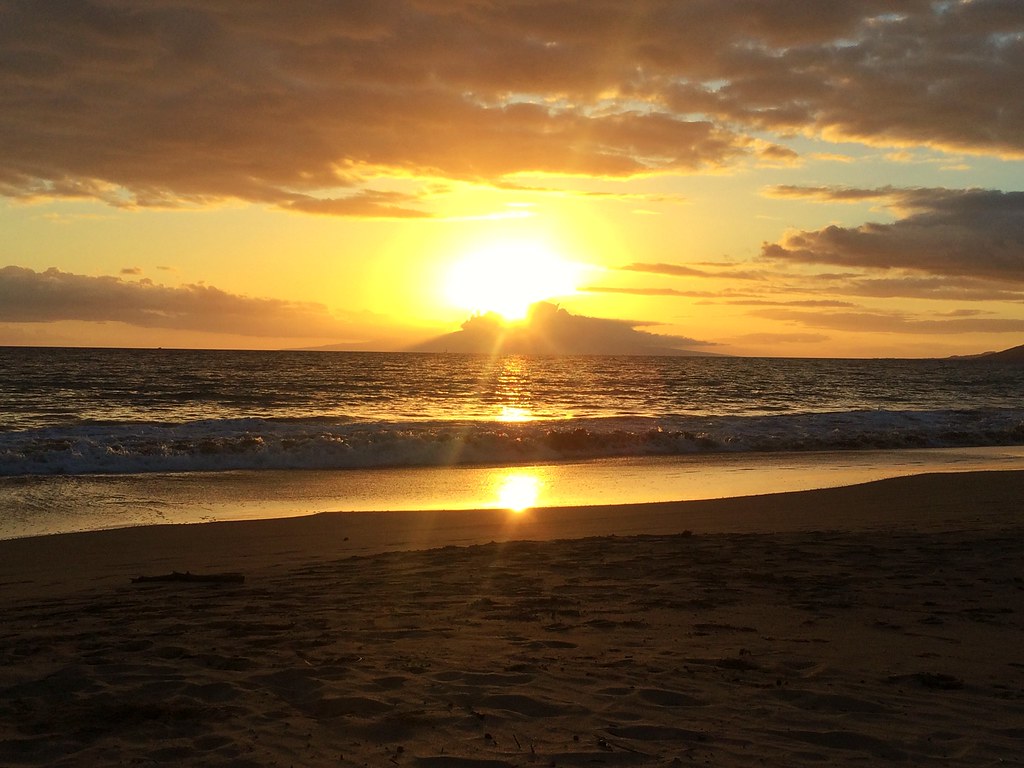 Our final day in Maui was spent exploring the lush valleys. We headed up a very scenic road along the Iao Valley. They charged non-residents for parking which we thought was very inhospitable so we parked in a lay-by next to the remnants of a smashed car window for free… Needless to say we didn’t feel very safe there so we speed walked to the Iao Needle viewpoint. The valley itself was awesome with green rippled mountain-sides covered in forests. The needle was a lone mountain spire rising 1200ft from the valley floor, higher than the Eiffel Tower in fact. 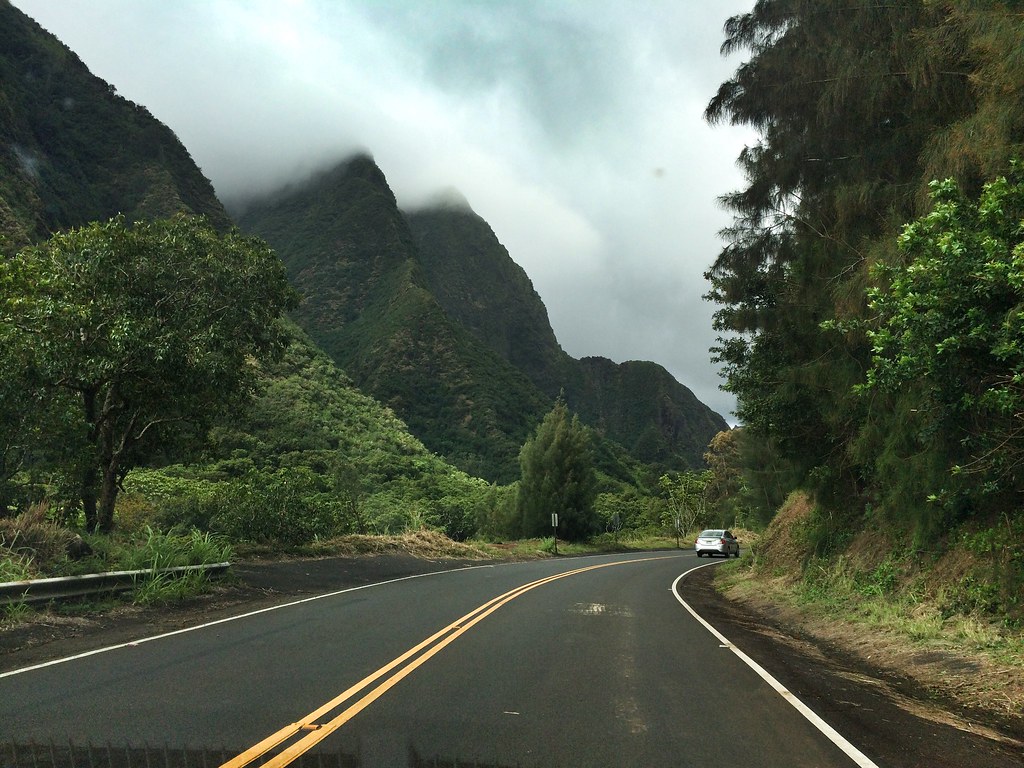 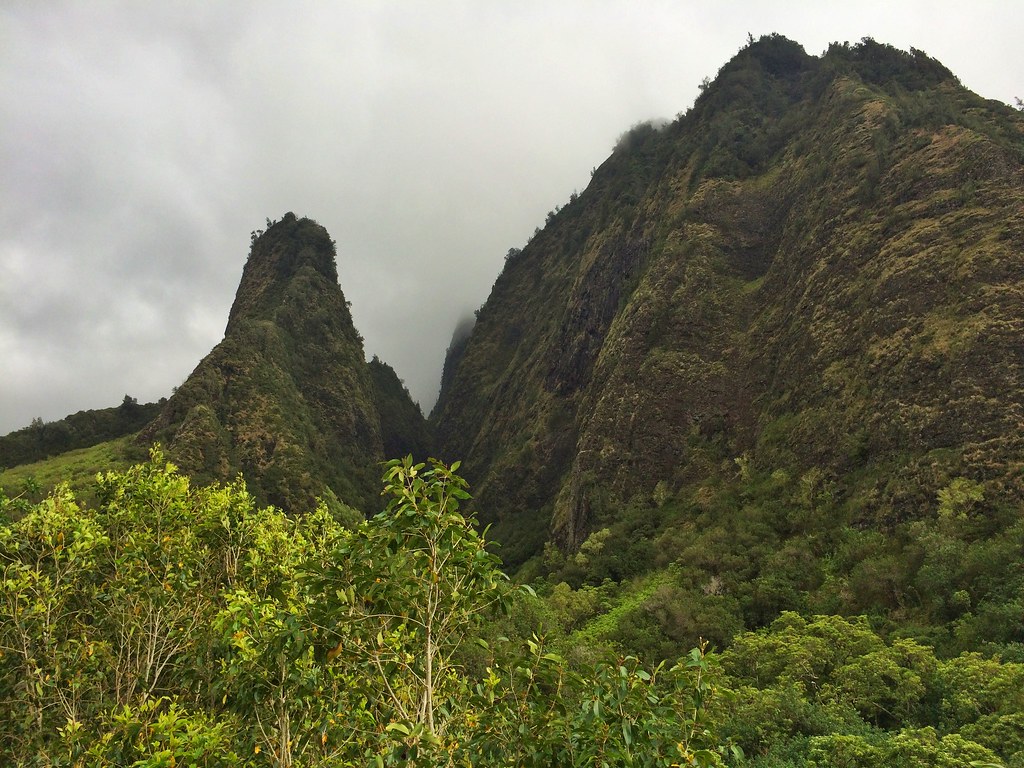 A short drive led us to the trail head for Waihee Ridge. The hike began in a rather dull manner, up a steep tarmac road and along a very boggy track but it steadily rose and began offering valley views with bright green surroundings and waterfalls plummeting down ledges. 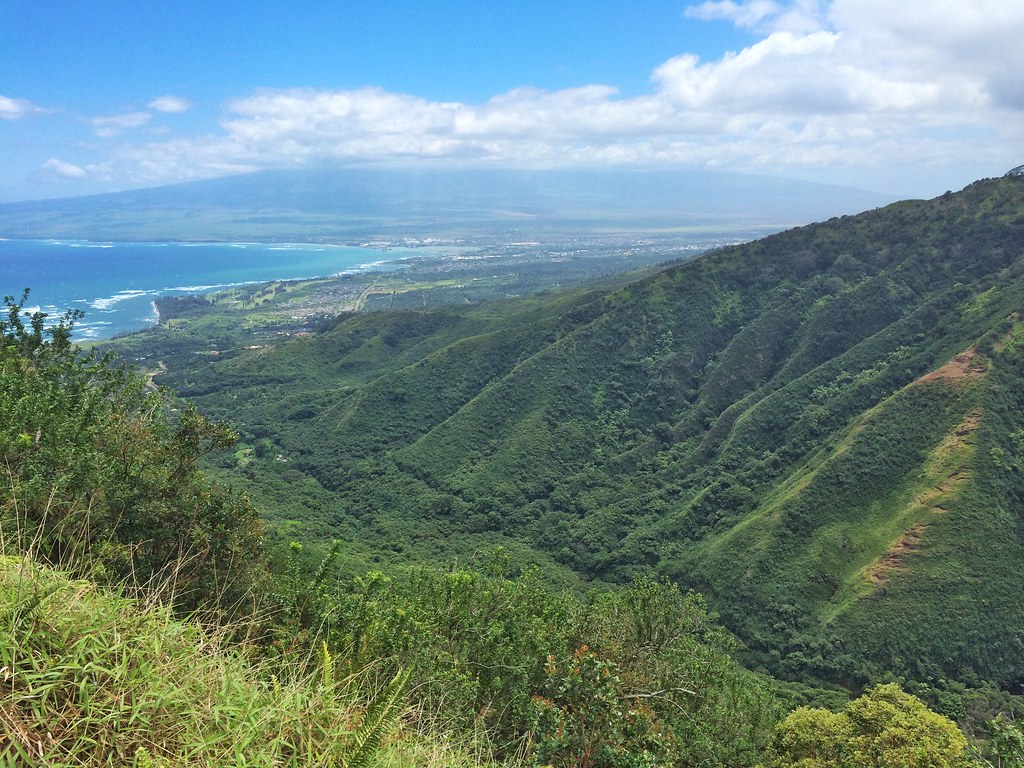 We went along an awesome section of the ridge-line where the narrow trail truly traversed the ridge and we had drop offs on either side. Valleys dramatically dropped down beside us and more waterfalls became visible between gaps in the rainforest. From the summit we could see the valley gradually losing height till it reached the blue ocean in the distance.