As we set off for our second roadtrip along the Hana Highway we had our windscreen wipers on full whack. All the beautiful waterfalls with inviting waterholes were now wild torrents with brown water gushing down forming whirl pools. We’d envisioned a day of jumping in the refreshing pools but we’d have a death wish if we tried that today. Luckily once we reached the Waiʻanapanapa State Park the rain stopped and we had a nice walk around the volcanic beaches with jet black sand. The scenery was awesome and there were beautiful contrasting colours with the black beaches, bright green plants and the deep blue ocean and rolling waves. 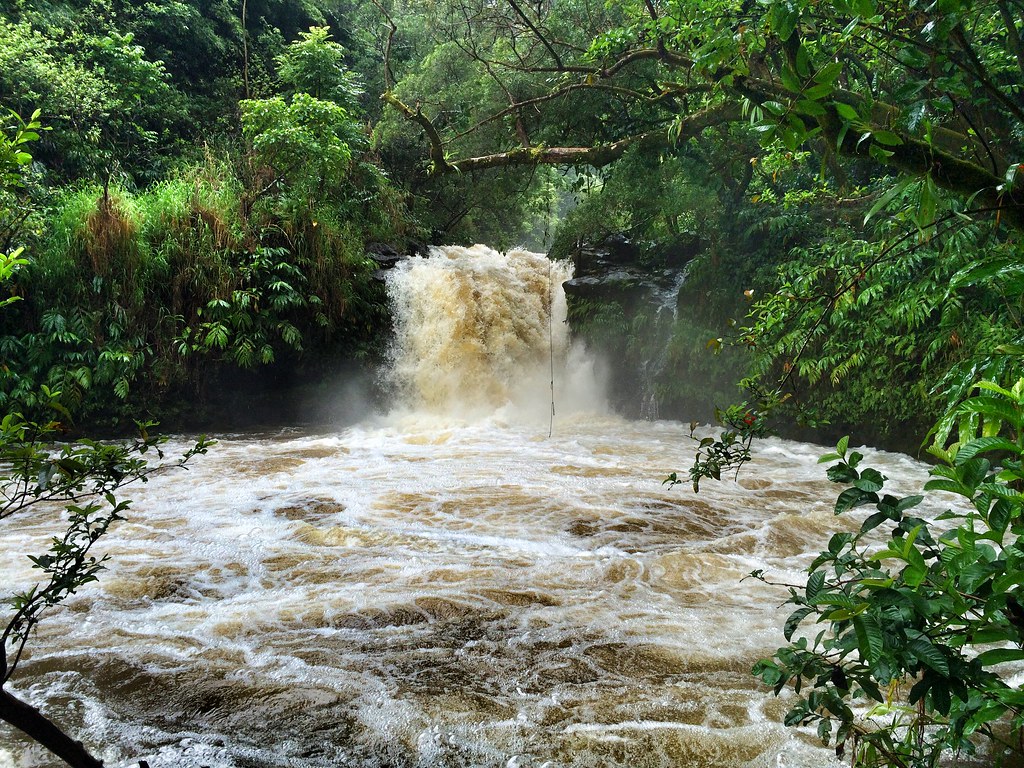 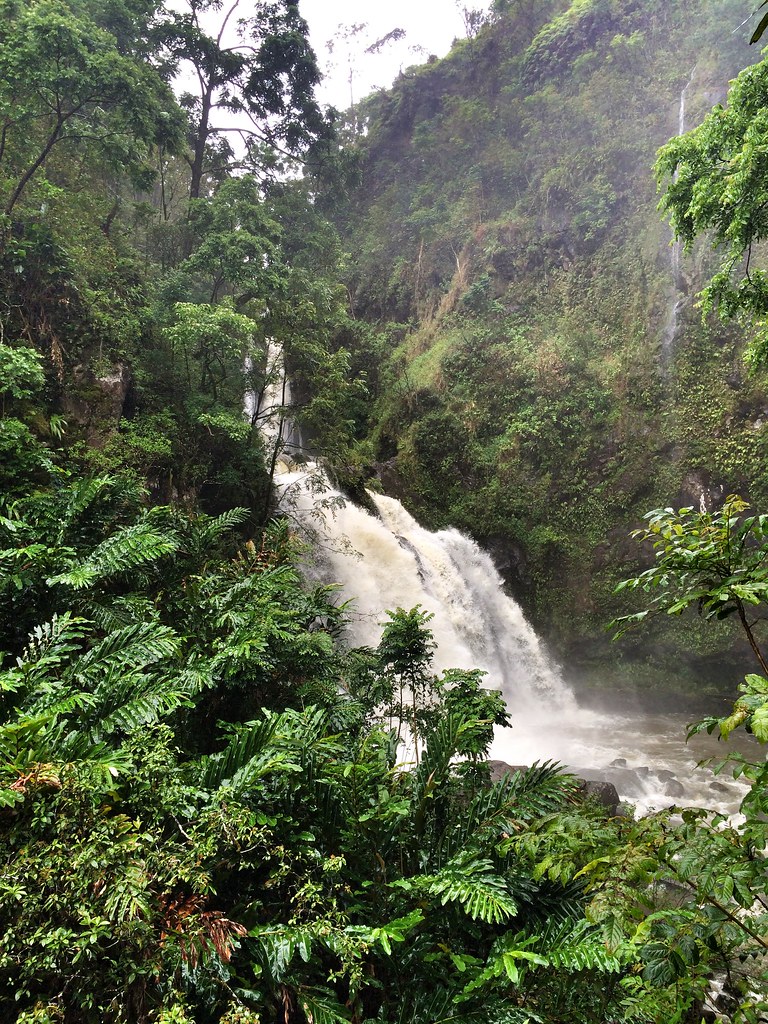 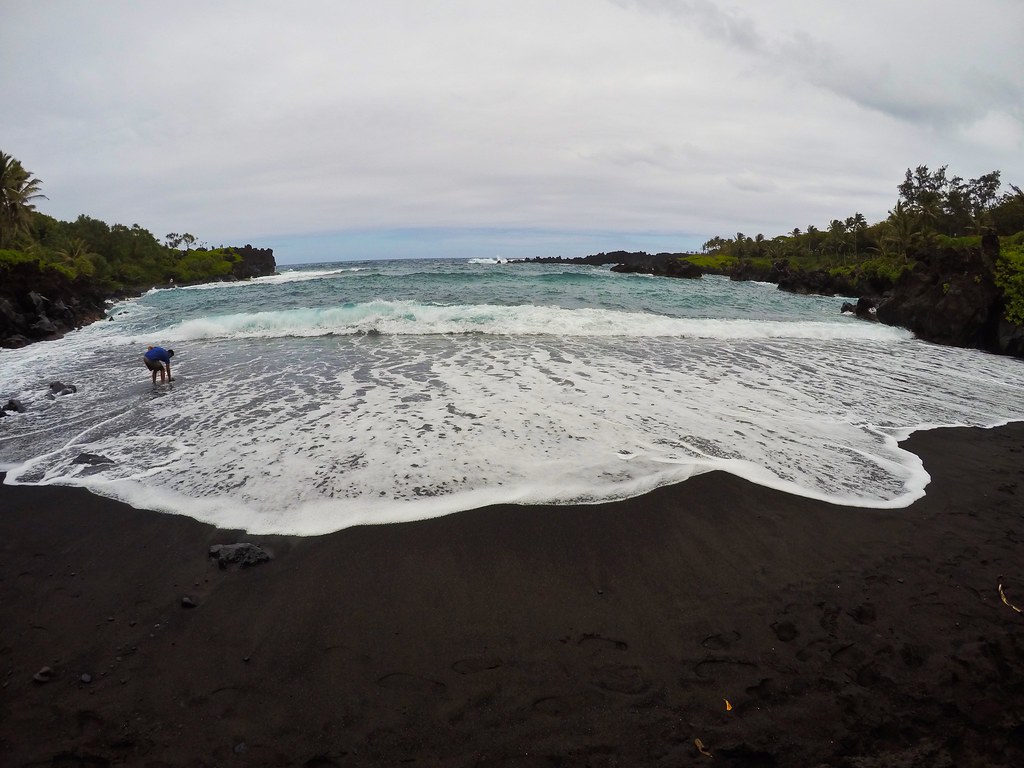 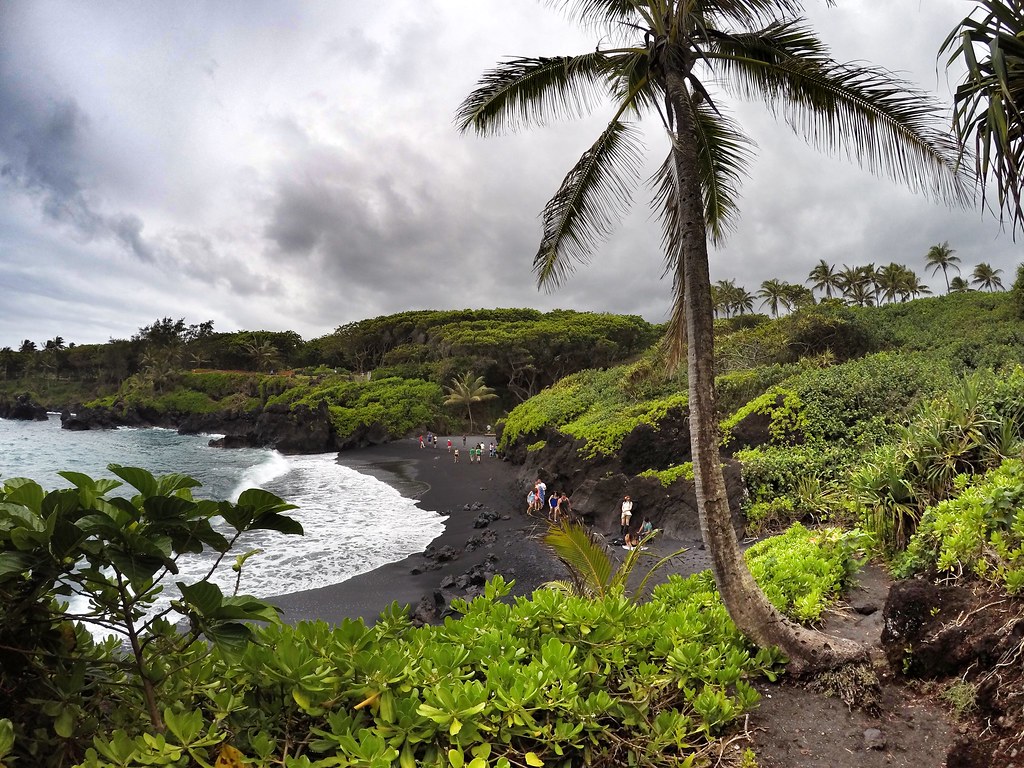 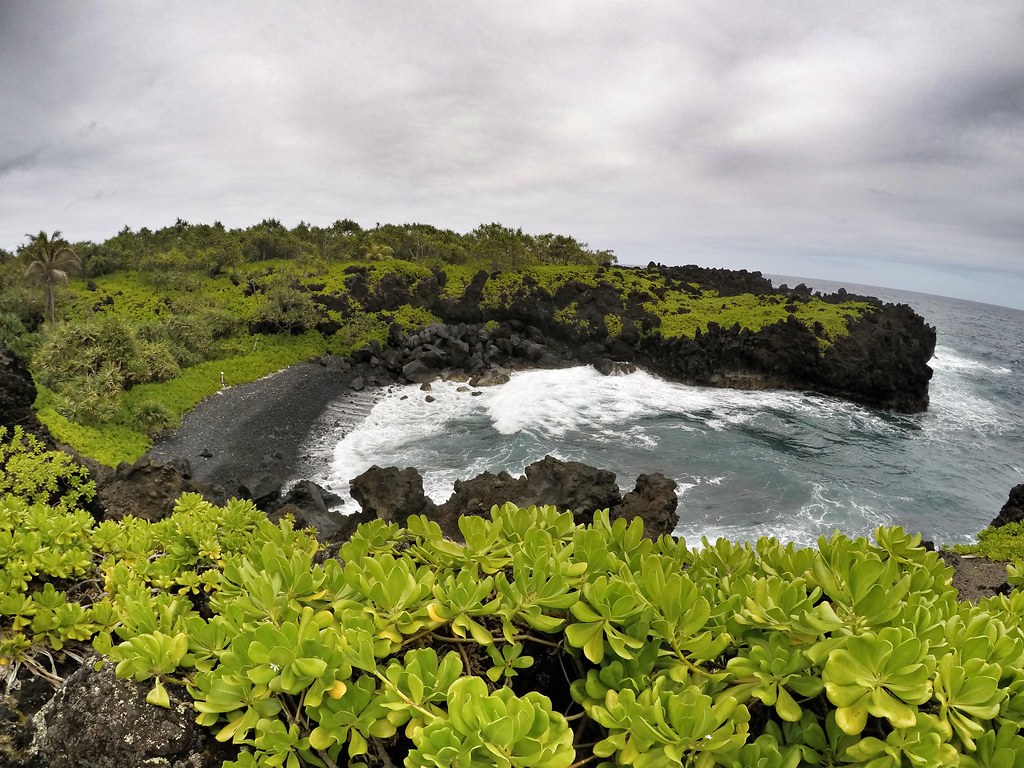 Our next stop was a beach I’d read about online; Kaihalulu Bay otherwise known as red sand beach. We pulled up along Uakea Road in Hana and had no idea where to find it. We had some info but it wasn’t adding up when we got there so I asked a worker in a tiny cafe. She directed me straight to a sign on the wall saying locals had been asked by authorities not to give directions to the bay due to the route being so dangerous. 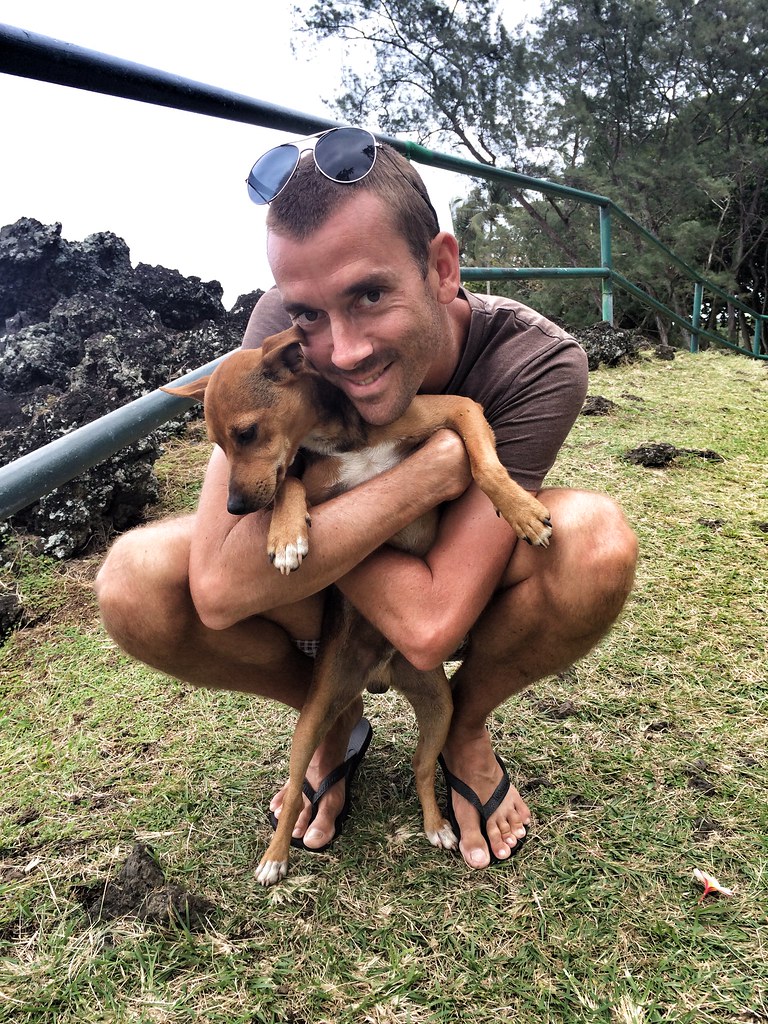 We knew people went there so we continued searching on our own and found the way. Use it at your own risk but if you head to the end of Uakea Road and walk along a grassy area to the bush line you’ll see a gap in the shrubs and a sign saying it’s dangerous etc. There were other people there so we felt safe. The route wasn’t as rough as I expected, the drop offs weren’t as big as I’d read and it was just a normal hike along a narrow track with a tall wall to one side and the ocean or shrubbery on the other. The only risk was the sheer wall above us which was made of fine volcanic nuggets compacted together, it looked ready to collapse at any moment. We saw evidence of previous landslides so walked rather briskly. As we rounded a bend the beach came into view and it was pretty damn cool. There were huge red cliffs with a red sand beach beneath them which curved around two pristine blue pools. A row of sharp rocks and boulders poked out the sea and blocked the waves making this one of the few places along the Hana Highway where you could swim safety in the sea. We walked along the rough and sharp red sand, more like volcanic scoria and into the clear blue sea. It was wonderful. There was actually quite a bit of pull from the waves coming and going over the rocks. Craig had fun jumping from a ledge into a deep section while I swam in the shallows like a whale on the brink of beaching itself. There were car sized red rocks along the far side of the beach that had fallen from the cliffs above, it was pretty crazy. 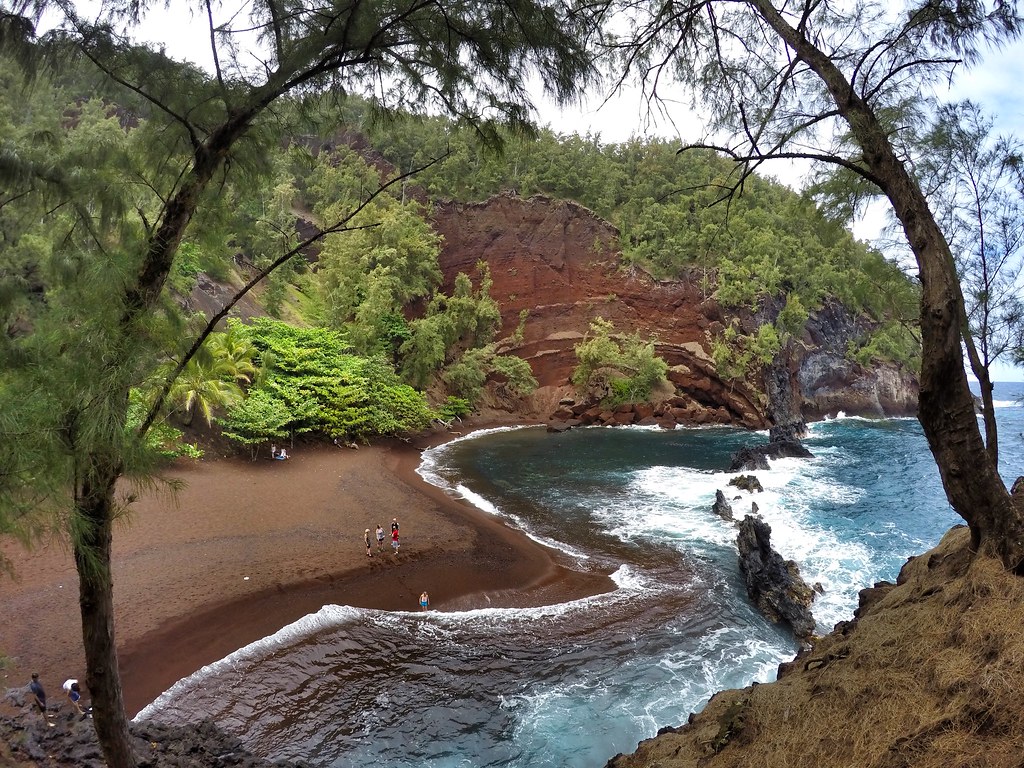 On the route back we stopped at Twin Falls which was so powerful that the sister fall had been closed due to flooding, we really didn’t pick a good day to come back to Hana but at least the rain held off for our main activities.