We wanted to stay in Kyoto but everything was way out of our price range so we ended up in a cheap hotel in Osaka where 5 nights cost the same as one in Kyoto. They managed to offer the rooms so cheaply by not cleaning the bedding. I was furious. It looked like a sperm donor bank had spilt a bunch of samples on the bedding.

Anyway, we set off for a day trip to Kyoto and were greeted with insanely long queues of tourists waiting to get on buses or visit the information centre. It was crazy. We managed to take a quieter route and headed to Kinkakuji, a Zen Buddhist temple which is otherwise known as the Golden Pavilion. It took about two hours to get there from Osaka and we didn’t manage to sit down for the entire journey thanks to few seats and too many old people taking the priority chairs. We felt like we’d been hiking all day and hadn’t even started exploring yet. The temple was bustling with tourists. It was a very pretty attraction though and was covered in glittery gold leaf. The temple reflected it’s golden self in the pond below and a variety of trees and plants lined the paths around the grounds. 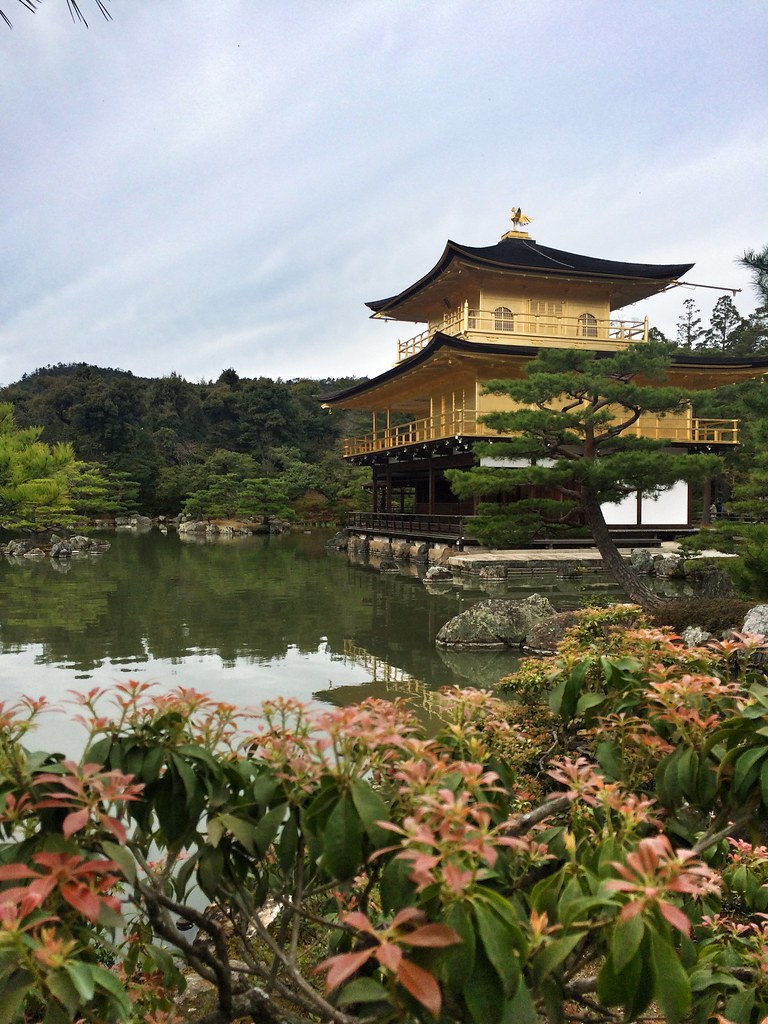 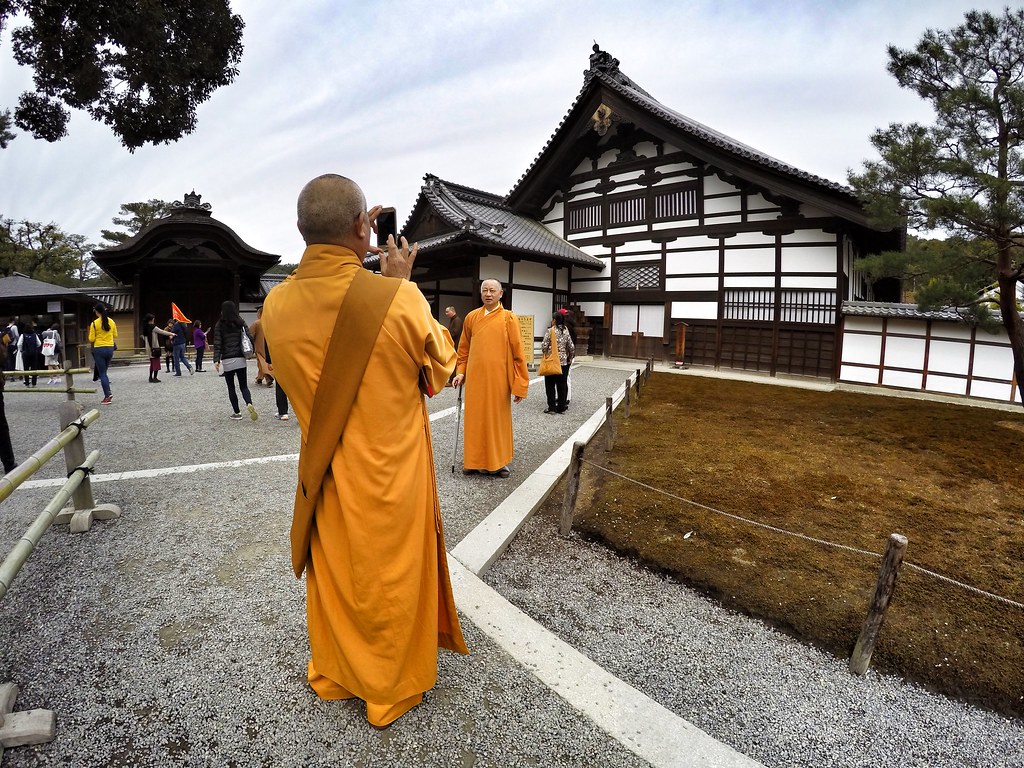 Afterwards we stood up for another bus across the city to see the cherry blossoms, something I was so excited to see. We wandered along the Philosophers Path which led us along a blossom lined path beside a narrow canal. It was beautiful with pale pink blossoms surrounding us. The path was packed out with people though and it was slow progress plodding along. Lots of locals had paid to dress up in kimonos for the day and it made for a beautiful photo, we even saw a couple of wedding shoots taking place. 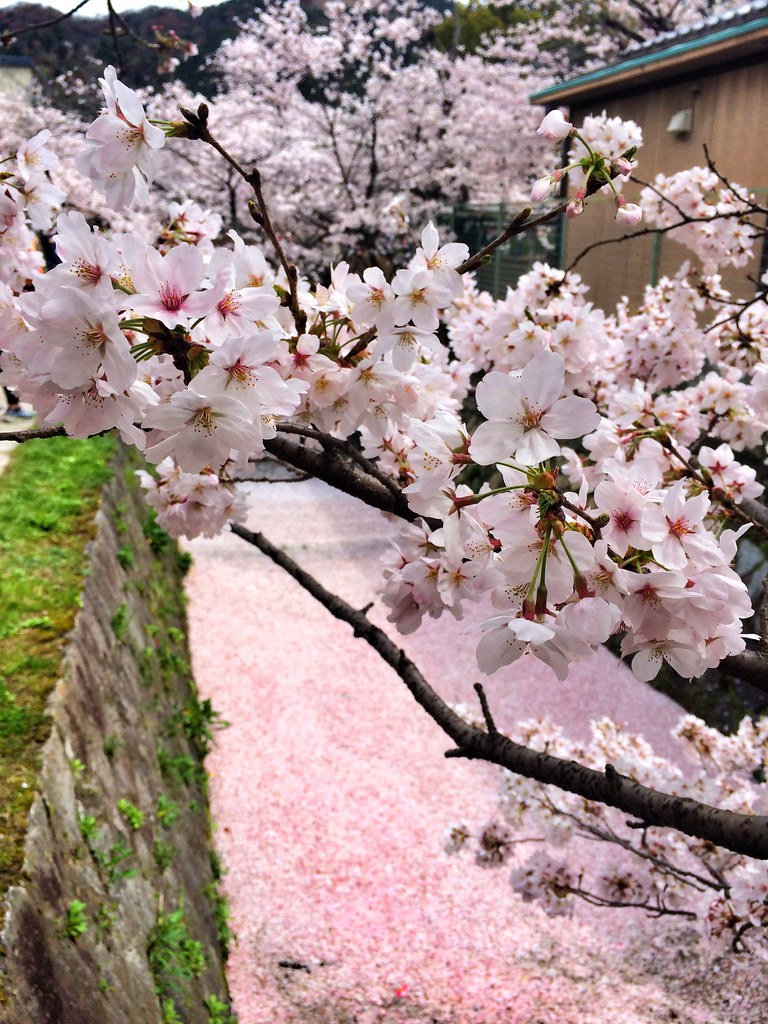 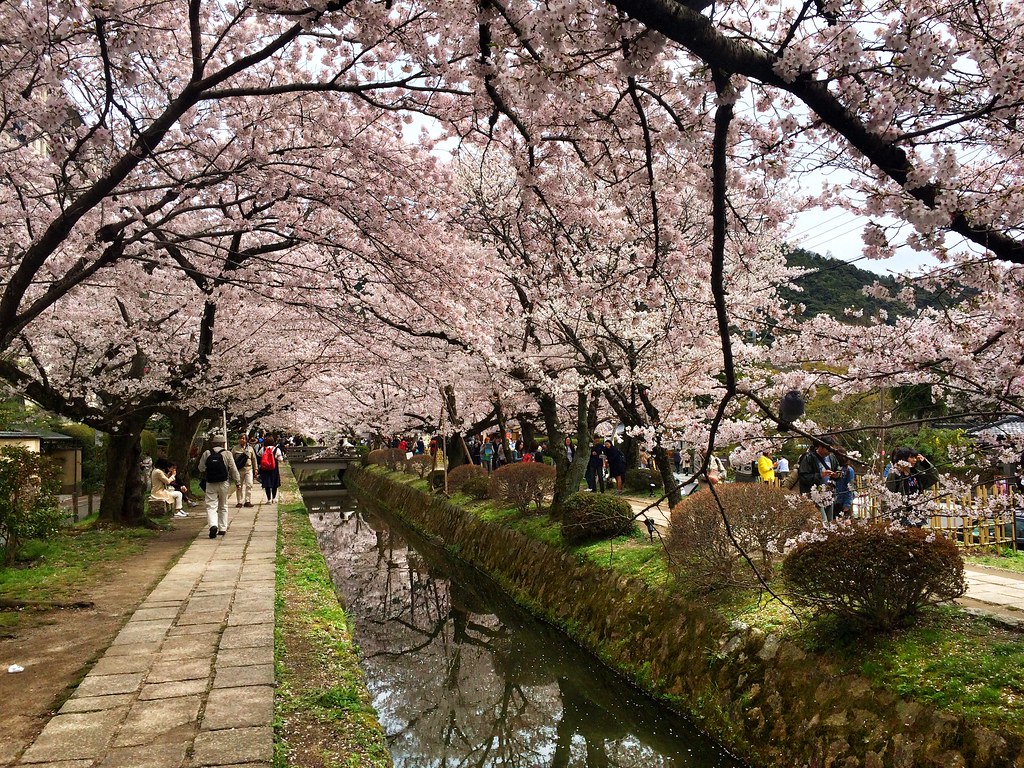 One area of the canal was a sea of pink where the blossom petals had all piled up. When we had enough we hopped on another bus to Heian Shrine. It was a lovely surprise with a huge bright orange Torii gate leading to the equally bright buildings. I loved the bright colours but Craig prefers the older more rustic temples. There were bright pink blossoms sneaking over the roof of the museum and I’d read the gardens here had beautiful weeping cherry trees so we paid up and headed in. The gardens were a little spot of paradise, unlike the blossoms along the Philosophers Path which were a pastel colour, almost white as appose to pink, these ones were a vibrant, bright pink. Trails led past and under the dangling branches with plump blossoms like cotton candy. There were ponds with traditional buildings reflected in the waters and surrounded by a blur of pink. 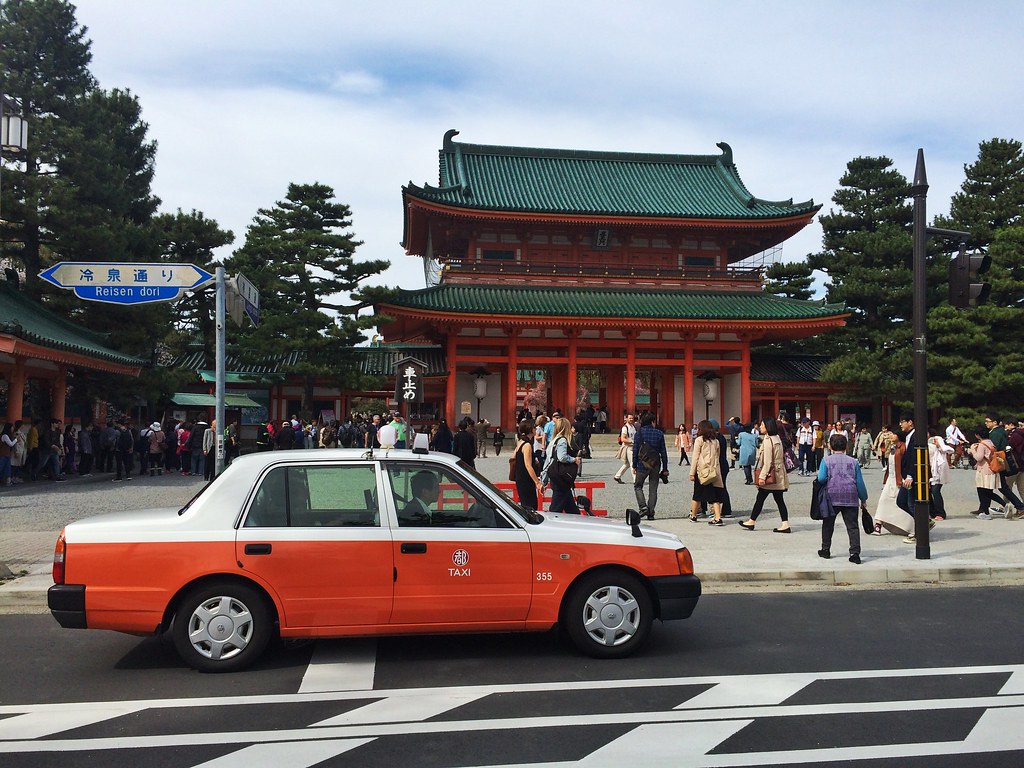 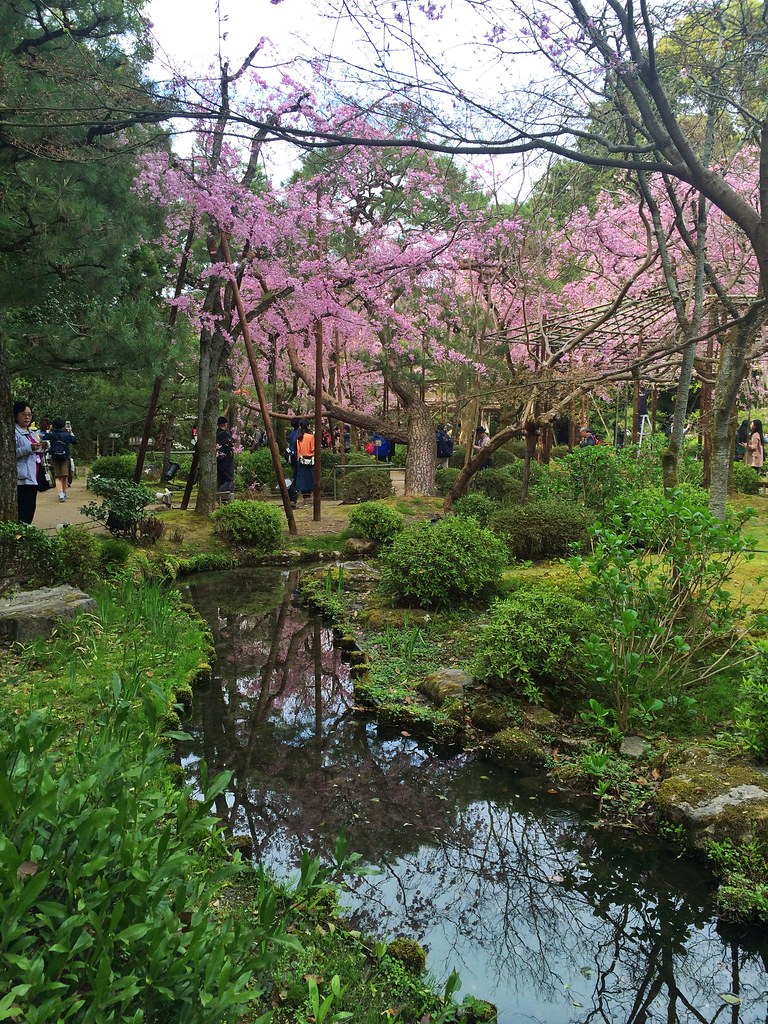 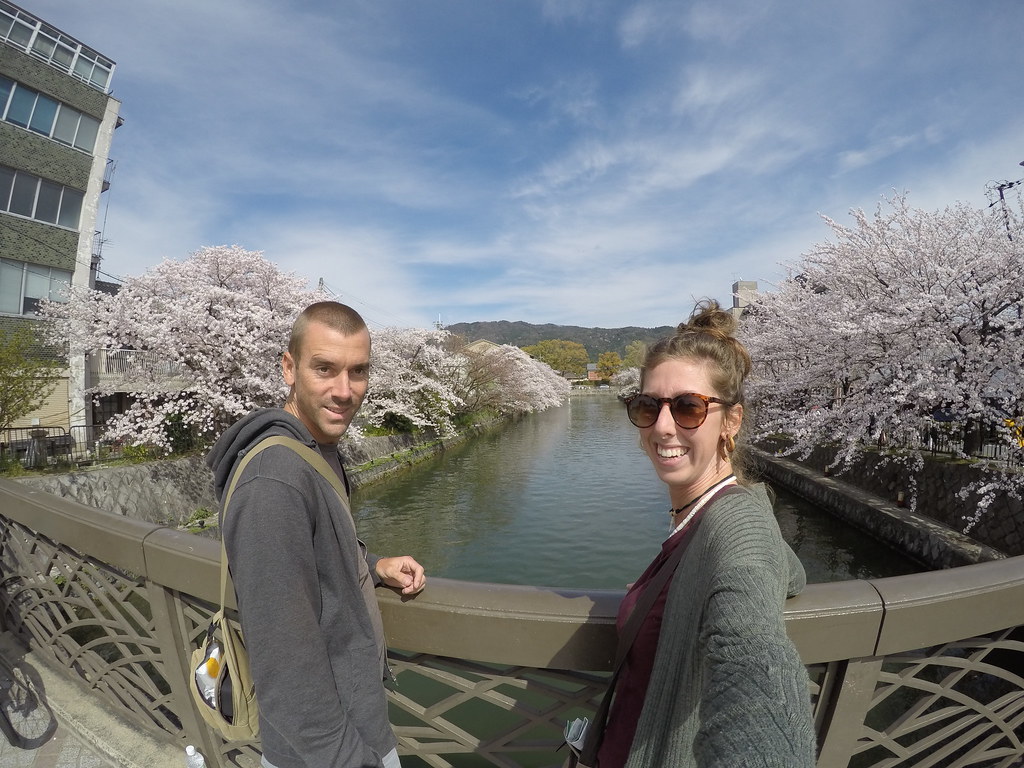 I didn’t realise that Geisha’s (called Geiko’s in Kyoto) still existed, their numbers are considerably less than what they used to be but there’s still a chance of spotting them in the Gion District of Kyoto. We were lucky to arrive in Kyoto for the once yearly Geisha dance performances which are said to be absolutely breathtaking…but once we enquired they only had the ultra expensive tickets left and we’d struggle to get into the city early enough for the cheap morning tickets on sale, so we had to give it a miss in the end. We didn’t spot any Geiko’s while wandering around so we continued temple hopping and ended up spotting two Geisha’s in a park. But it was too good to be true, they had to be tourists dressed up but they sure made a nice photograph. 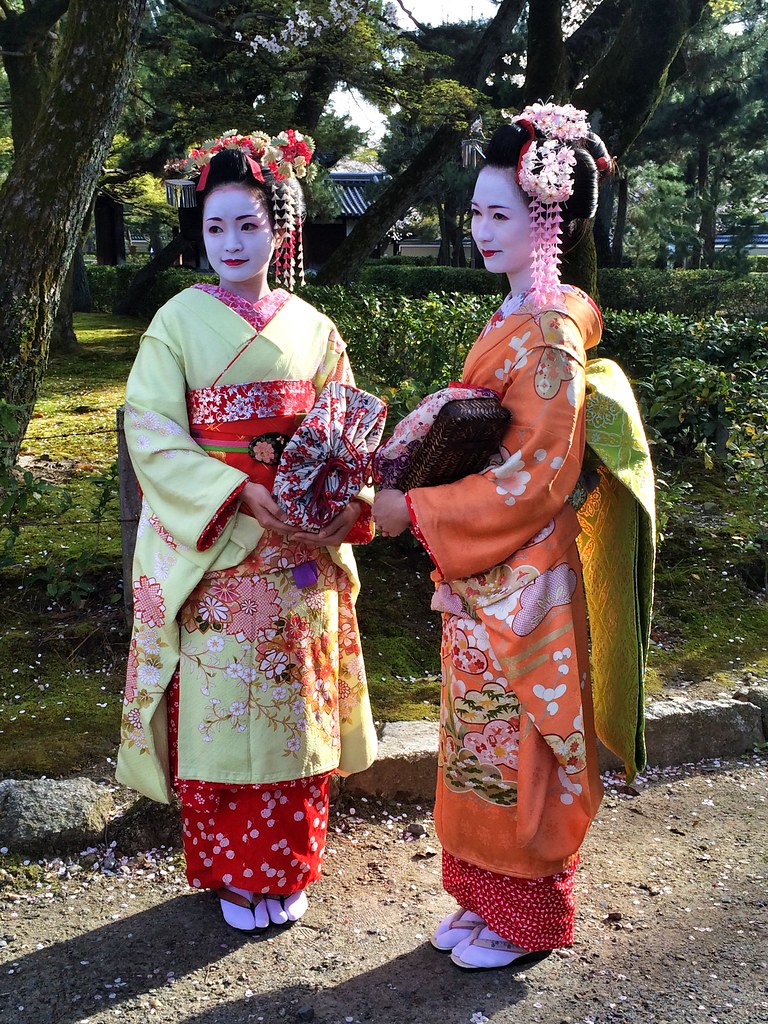 We followed the hoards of people (I know it’s cherry blossom season but the crowds in Kyoto have really surprised us) up to Kiyomizudera Temple. We were greeted by another wonderful fluorescent orange torii gate with matching Pagoda and buildings all around. We didn’t go into the main temple area as some parts were undergoing construction. There were cherry trees dotted around and a view across Kyoto and the surrounding hills. 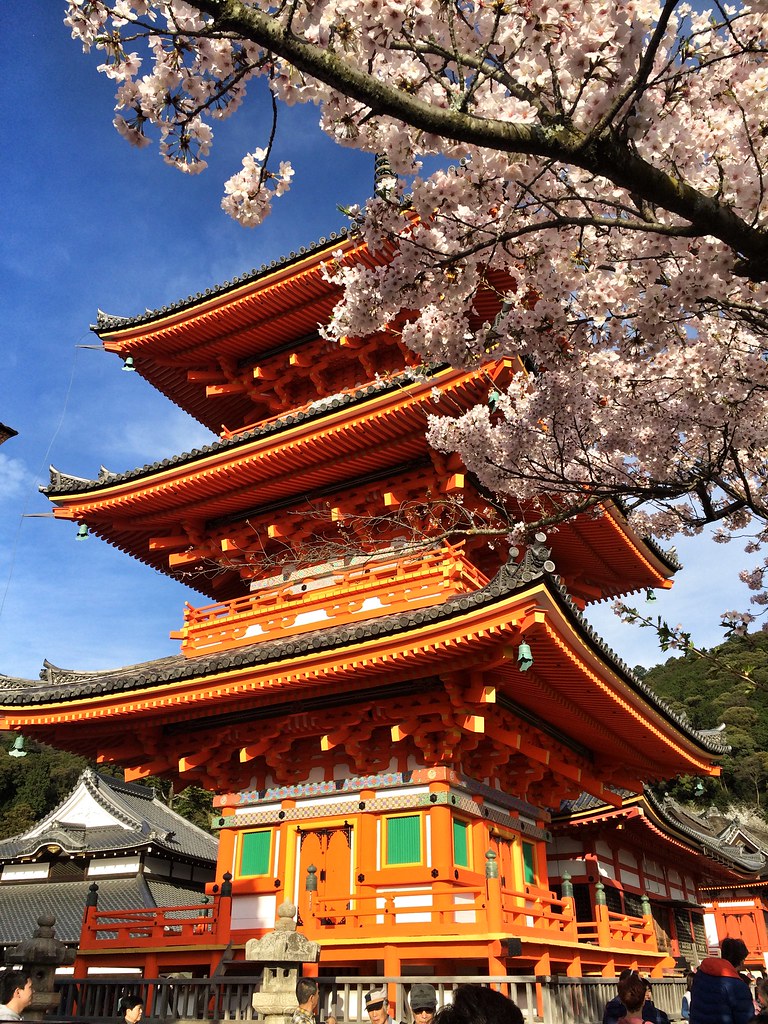 I wasn’t satisfied with my Geisha experience so afterwards we went back to the Gion District and as soon as we stepped into the old wooden alleys we came across a huge crowd of tourists poised with cameras…so we did what everyone else did and waited with our cameras. A taxi was waiting outside Gion’s most famous tea shop and then the crowd all let out the sound of awe as a real Geiko stepped out and quickly ducked into a taxi. It was like seeing a celebrity and all of a sudden a shitty iPhone video of a white faced beauty became a treasured keeper on my phone.

I was happy with that but as we wondered down another alley we saw a crowd of people again. Two security guys were keeping the tourists in-check and shouting ‘no flash’. We had to wait a good 15 minutes for anything to happen but then we heard a jingle jangle sound and a clip clop; it was a Geiko speedily walking towards us with platform wooden sandals. Wow! She looked amazing. We waited a bit longer and it was obviously appointment time for the ladies where they go from one tea house to another performing their meticulously practiced skills from the art of pouring tea in a way which is aesthetically pleasing to traditional dance or even just banter with their paying clients. 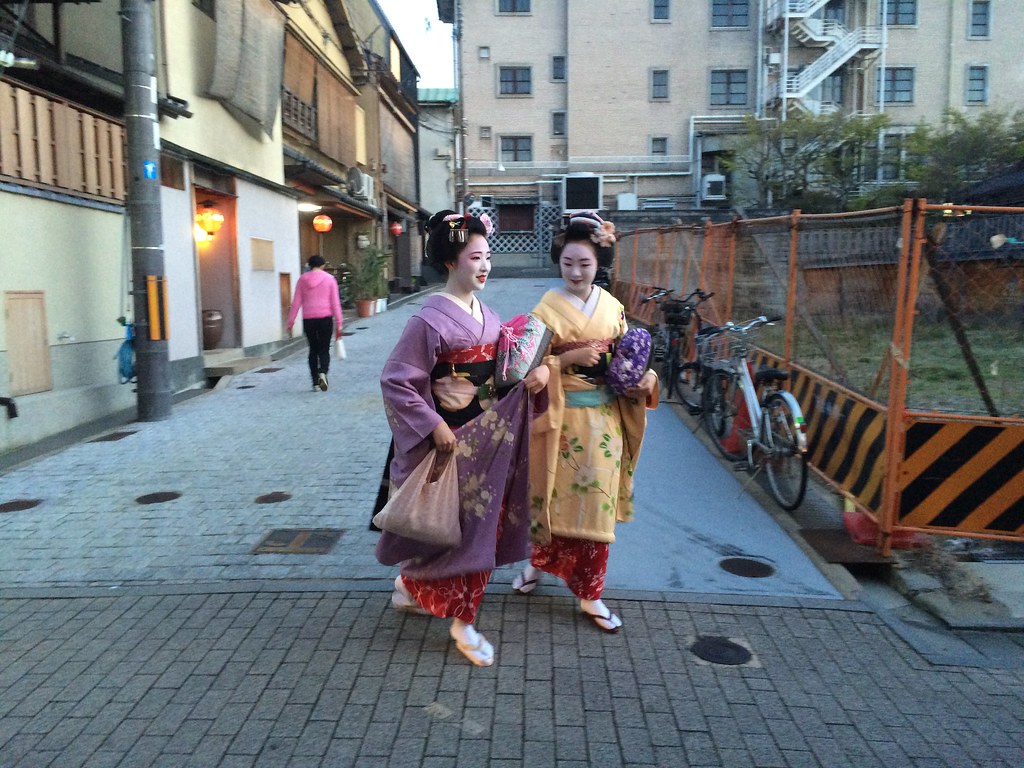 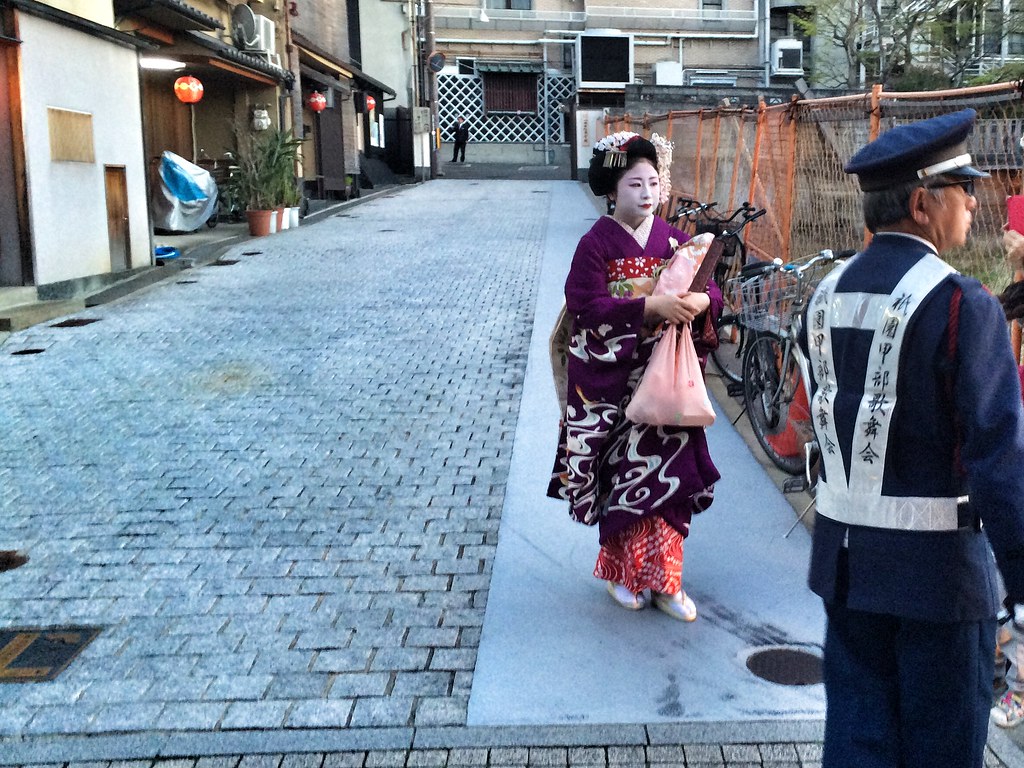 We had about 8 more Maiko’s (Geiko apprentices) and Geiko’s wander past us and it was amazing. All with pure white faces, bright red lips, the most intricately styled hair which is said to be left in place for up to a week. They all wore thick, elaborate kimonos and carried in their arms a fabric covered box full of party tricks so to say . I think Craigs starting to feel better as he cracked a joke…”I don’t think she was feeling too well, she looks a bit pale” to which I roared with laughter. 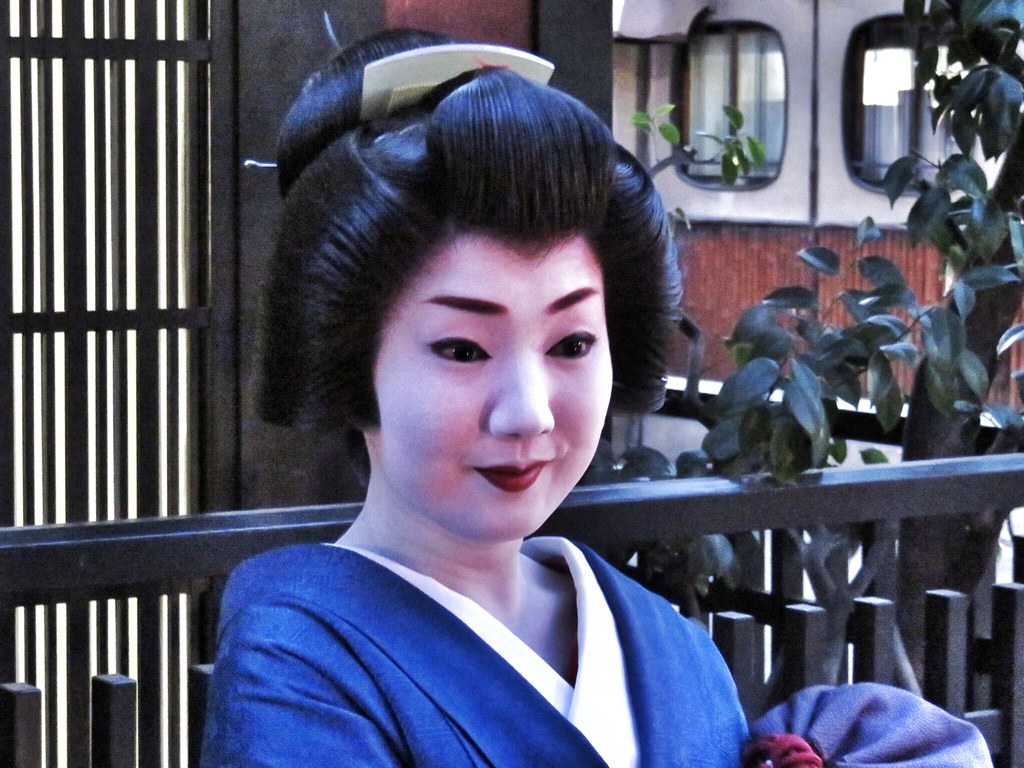 It really was Geisha rush hour and when we left we bumped into two more beautiful women. I couldn’t wipe the smile off my face afterwards.