The bus to Shirakawa-Go in the Japanese Alps wasn’t covered by our JR pass and cost us a whopping £30 each for a return ticket. It only took 50 minutes to reach the UNESCO village along empty roads and lots of tunnels. It began raining as we arrived and wasn’t the best weather but when your only in a country for two weeks you have to make the most of everyday. We’re not used to rushing around on a schedule but this is how most people travel.

Shirakawa-go is home to numerous traditional farmhouses. They are Gassho-style, meaning ‘prayer hands’ and you can see how they got their name as the steep roofs resemble two hands going together for a prayer. The roofs were thickly thatched and built to withstand the regions heavy snowfall. Every house was gigantic; each with three to four stories and built to home extending family’s. 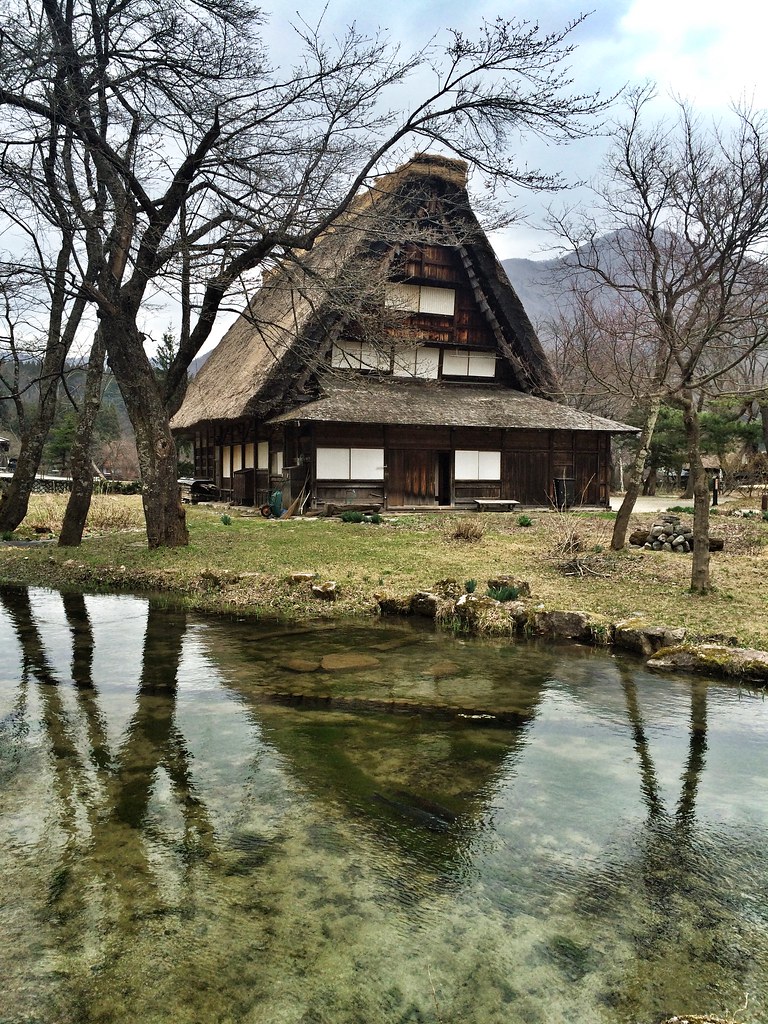 It wasn’t quite what I expected though and was really busy with tourists. The photos I’d seen looked incredible but it was evident that none of them were taken at this time of year. In winter a couple meters of snow settles over the whole village like icing sugar on a gingerbread house and in summer the crops are fluorescent green, but when we visited there was neither snow nor colour. Not only that but there were lots of roads and alleys which meant it was tricky to get a photo of one in a natural surrounding. This used to be a really remote village but the express road has put it on the well trodden path. It was still a very beautiful village though and totally not what we expected to see in Japan – it was just like the European Alps, however we both agreed that we preferred the ones in Austria and Switzerland with bright pastures and cows with bells everywhere. There really wasn’t much life to the ones in Japan, it was more like a museum village that no one lived in but everyone just gawped at. We did visit the folk village which offered us a chance to see a cluster of the farmhouses without the crowds in a more natural setting with gardens, ponds, a clear stream and a few pink cherry trees. Most of the houses here had suffered fires, been rebuilt and relocated to this very spot. In fact a lot of the houses were moved to Shirakawa-Go after the completion of the Miboro Dam in the 1960’s which would of submerged some of the buildings. 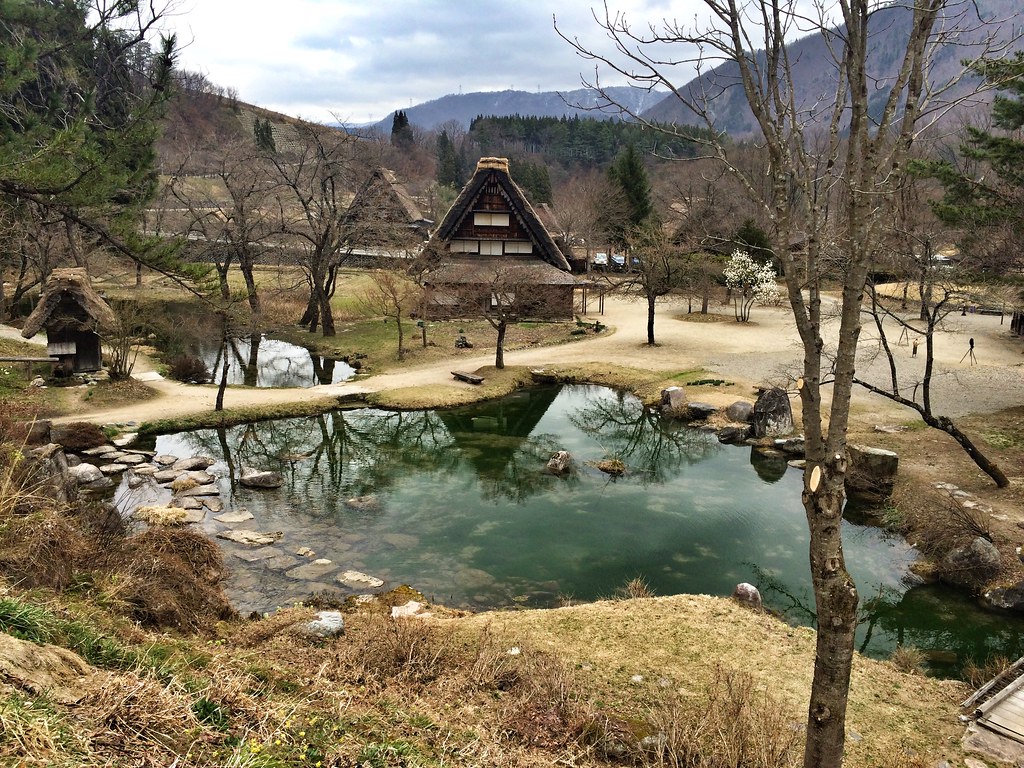 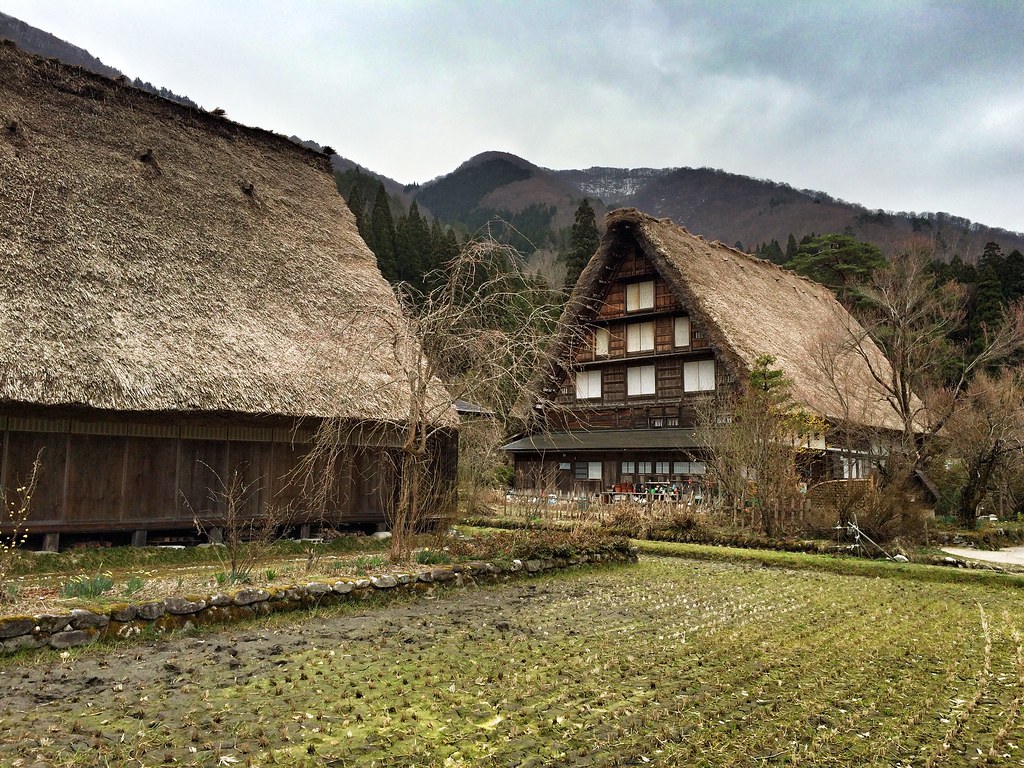 A few of them were open to view and were just as big from the inside with huge open spaces. I don’t know whether it was traditional Japanese style with bare rooms or whether the museum just didn’t bother filling the rooms with any furniture. There were a couple of fire pits with a kettle resting above and matts around the edges, but that was as far as the furniture went. It would of been nice to see how they really live in these impressive houses.

We wondered up to a viewpoint which revealed the pointy roofed houses along the flat valley and surrounded by hills. There were snowy mountains in the distance and a river running through the valley. 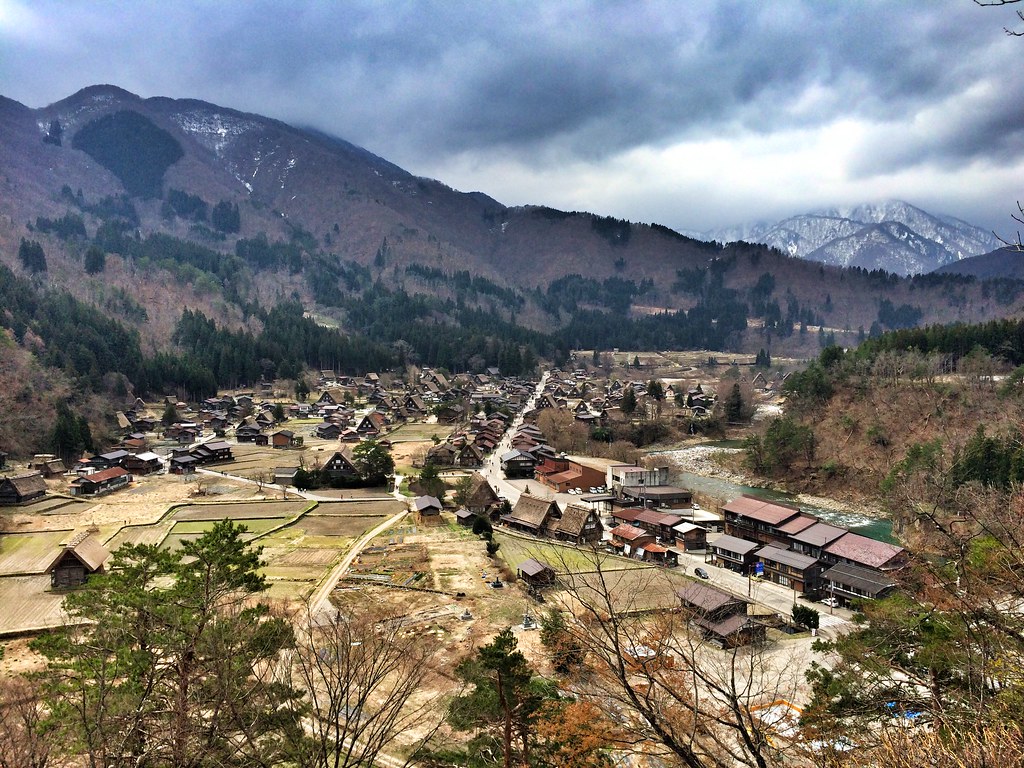 A few ladies dressed in kimonos were having a photo shoot which added a nice burst of colour. There was a brochure at the information desk with some info and photos about the area. Apparently it takes 60 men 4 days to re-thatch a roof! 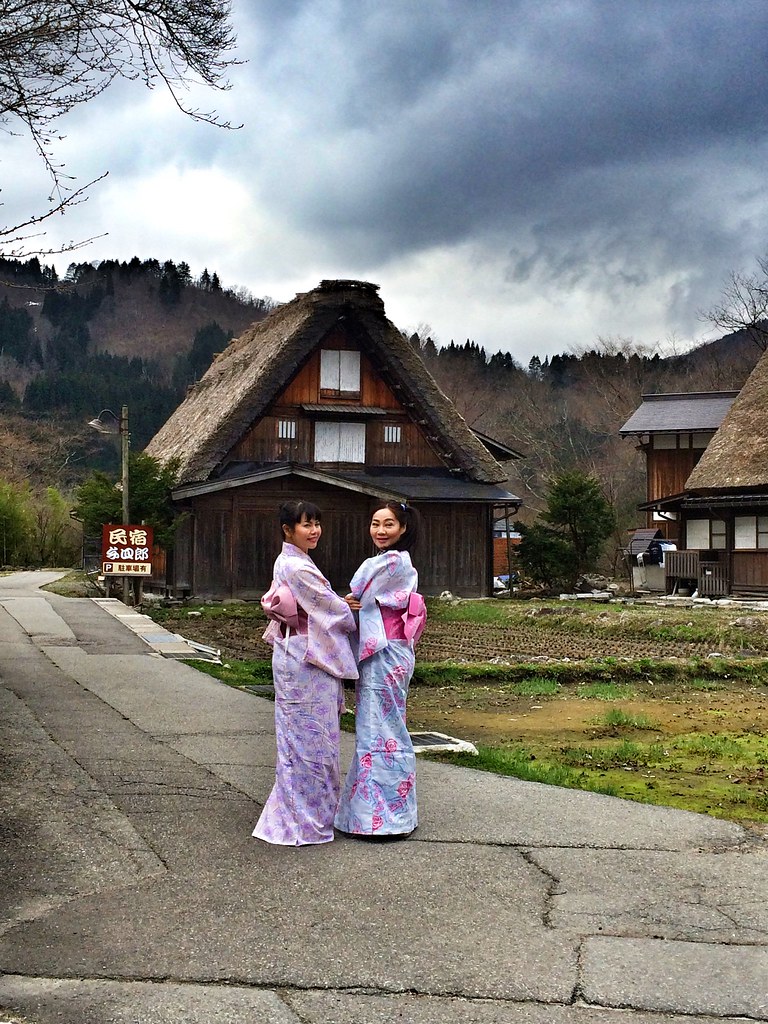