We didn’t have any bus break down’s in our entire 4 months in India. Yet the first bus we took in Nepal broke down and was deemed a piece of scrap metal. We left the other hopeful passengers and sucked up another fare on a different bus…which also broke down.

Eventually, we made it to Sauraha, our base from which to explore Chitwan National Park. We found a wonderful bungalow which was surrounded by lush gardens, and our neighbours behind us were elephants resting and eating after a long day walking tourists around the park.

The main reason to visit Chitwan is to see wild Rhinos, and we wanted to see them on foot, not from the safety of an elephant. We found a great father son company to guide us into the park. The father was just the sales man, a good one too, we paid extra for his wife to make us a pack lunch, while their friendly son and an apprentice would take us into the jungle. It was so nice to be able to go without a group of people, just us and the guides. We’re pretty fast hikers and always get lumbered with a fat person that constantly holds up the group huffing and puffing and complaining that ‘I didn’t think it would be so tough’. Well you should of thought about that before you ordered an extra pie.

Chitwan is also home to tigers, sloth bears and elephants – our guides didn’t have guns to defend us with though, they had sticks. Just a polished stick from a goddam tree. Brilliant.

We opted for a dug out canoe ride first, and saw a few crocodiles in the river before setting off into the bush. Within minutes the guide said “I smell Rhino!”, Craig and I were thinking, here we go, their clearly pulling our legs. The guides were sniffing in such an exaggerated way, wrinkling up their noses and flaring their nostrils.

But then, we also smelt Rhino, a pungent whiff hit us as we walked past fresh dung and urine, a Rhino was clearly in the area. We found a dusty track leading down to the river with an encyclopaedia of wildlife prints embedded into the dust. The prints of animals i’d dreamed of seeing were all infront of me; rhino, elephant, bear, tiger, and a huge python slither.

The day before, the guide saw 7 Rhinos, so we had high hopes. We started the trip in the early morning, and by 12pm we still hadn’t seen anything. It was unbearably humid, and we were traipsing through long grass; when I say long, I mean taller than us. It was in this grass that the guide quickly jabbed his hand towards us to stop us abruptly. Then I saw, a glimpse of a Rhinos bottom run past, and a baby Rhino followed, quickly stampeding through the grass.

We had to be dead still. Rhinos have great hearing but awful eyesight. The apprentice was sent off to climb his 3rd tree of the day and see where the Rhinos were. In the meantime the guide explained that we were in a very iffy situation, the Rhino had a baby with her, and clearly thought we were a predator and that’s why she ran away. Had she seen that we were humans, she would of charged us to protect her baby. The guide seemed quite tense and uncomfortable with the situation we were in.

We continued to hike, technically we’d seen a rhino and it’s baby, but it was amongst foliage so not ideal, but the guides were genuinely trying their best to find more. As we stopped for lunch by a river the guides heard a noise in the bush ahead. We sat on the banks of the river and on the opposite side the long grass started parting and out came a male Rhino. He was huge, and covered in thick armoury, it was so neat how the sections of his body were almost seamed together, just like he was dressed for battle in silver shields. We kept quite and he ventured into the river, maybe 20m from us and totally unaware of us. We were so lucky with our location and had an hour long, live, wildlife show, while eating rice from a bag.

He had a nice bath, and then collapsed on one side for a therapeutic mud bath. Then he really relaxed and we were treated to Mr. Trumpet Pants, as he farted away. Typical man, huh!

We ended up walking 30km, due to us struggling to find a Rhino for so long. It might of been exhausting, but 100% worth it and is still one of my highlights of our 6 years on the road. 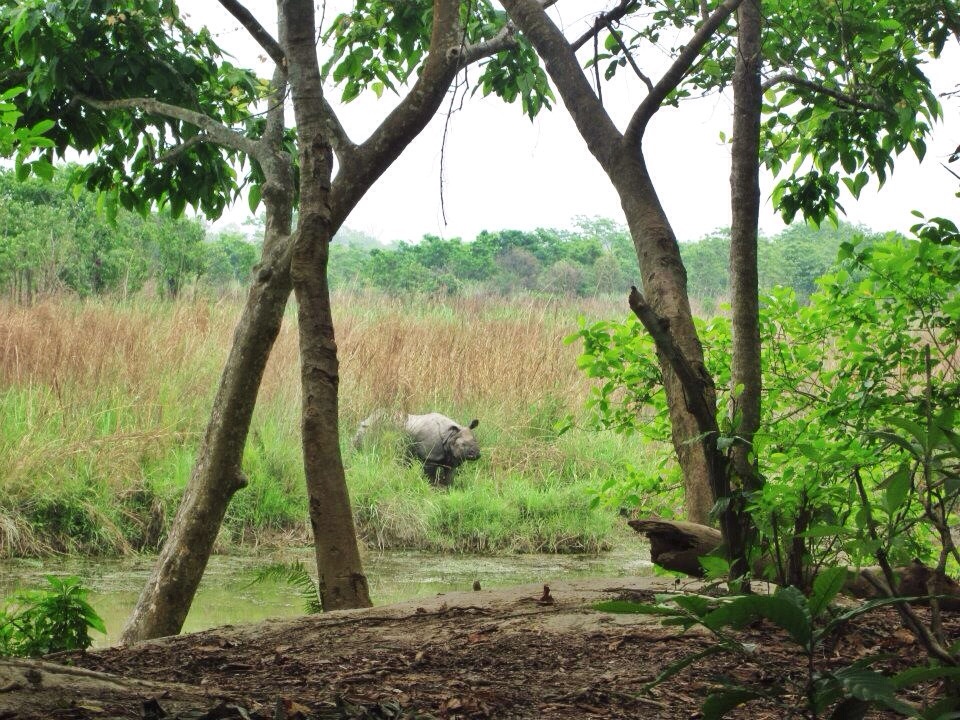