The past few days have been so much fun and an overload of incredible scenery. From the beautiful Geirangerfjord we drove the national tourist route from Geiranger north to Andalsnes. The weather is still scorching hot; Our chocolate no longer snaps, but bends, and our dirty hiking socks dry hard like cardboard. Apparently Norway hasn’t had a summer like this in 5 years.

We’ve been cooling off ourselves, the food and Pablo by driving fast through the tunnels with the windows wide open. But when the tunnels are 5km long it becomes uncomfortably cold. Craig was almost shivering through one of them and I expected to look at his face and see ice attached to his stubble and eyebrows.

We’ve camped in some lovely spots on route, one right next to a lake which we spent an afternoon swimming in. A huge mountain ridge was 1800m above us, the top was flat and spikey like a comb. As the sun set (at around 11pm!!) the mountains changed colour over the next hour from grey to dark red. Then a full moon popped up from between the mountains and reflected in the lake – who needs a TV when you can watch Mother Nature in action?

The next place we stayed at was right on the outskirts of Reinheimen National Park – which translates to home of reindeer…we saw no reindeer, I’m sure their a myth, but it was still a beautiful place to stay.

The next day we headed to the highlight of the route – The Trollstigen (Trolls ladder), where 11 hairpin bends take you down into the valley. There’s a viewpoint from the top that we almost missed and had to reverse back up the road before we started descending the ladder. A modern cafe and gift shop sat at the top, with a series of infinity style pools made from barriers along a river. Then a path with viewpoints jutting out of it (which cost £20million to build) led us to an area with fab views of the area. Two prominent peaks headed sky high above us and then the zig zagging road cut through the shrubbery, past a 350m waterfall and into a curved valley with peaks along the ridge.

Thankfully we drove down the road, not up! Once in Andalsnes, which is the end of that tourist route we found the trailhead to a hike I’d read about – The Romsdalseggen, which is up and along a ridge line. It took one hour to climb 537m to a viewpoint which hung above the forest canopy. Buddhist prayer flags swung between trees; we felt like we were back in the Himalayas. The view was great already, but another sweaty slog up to about 750m and it was spectacular. On the ridge line we could see a fjord surrounded by peaks, a valley to our right with mountains that had sheer rock walls and swooping curves up to there summits. To our right were two bowl shape valleys, one after the other, with an emerald green river meandering between patchwork pastures at their bases. The valleys were thin and curved up to steep mountains with shrubs clinging onto the lower edges. The peaks were all pointy and spikey like the top of a lemon meringue pie.

As if the scenery couldn’t get any better, we followed the Langfjorden, where the road was on the edge of the crystal clear shores of the ocean. The jaggered peaks left behind us, we passed rocky islands and small rounded hills covered in pine forest. As we veered inland we gained elevation, and as the road turned a corner we were hit with another stunning mountain view – again!! Where did they come from?!

I wanted to drive from Eikesdalen to Sunndal, so we took the turn off and drove towards two almighty mountains, sheer rock faces dropping hundreds of meters and trees defying gravity holding onto the lower slopes. We passed the most incredible river, so clear and blue, and round the corner was a beautiful lake; turquoise and surrounded by mountains – otherwise known as paradise.

We desperately wanted a wash after our hike so looked for a nice swimming spot but soon found a barrier across the road. We asked a couple why it was closed and they said there was torrential rain yesterday which completely wiped out the road!! Crazy! So that was a shame as 25km down the road was the worlds 4th tallest waterfall at 655 meters.

The lake became a bit churned up from a couple of boats so we decided the nicest spot for a dip was the river. Remember me saying how cold that water was that we walked through to the glaciers…well it was almost that cold, it literally took my breath away. But I felt fresh as a daisy afterwards. As we dried off in the sun we kept getting bitten by horseflies and the only way to prevent them was to keep moving. We must’ve looked hilarious to anyone driving over the rickety bridge near us – like really bad dancers jiggling around and swaying our arms like birds.

Just to put a giant cherry ontop; Lastnight we stayed on the shores of a fjord, Craig heard an odd noise and saw dolphins swimming infront of us. They stayed around the area all evening…I LOVE NORWAY! 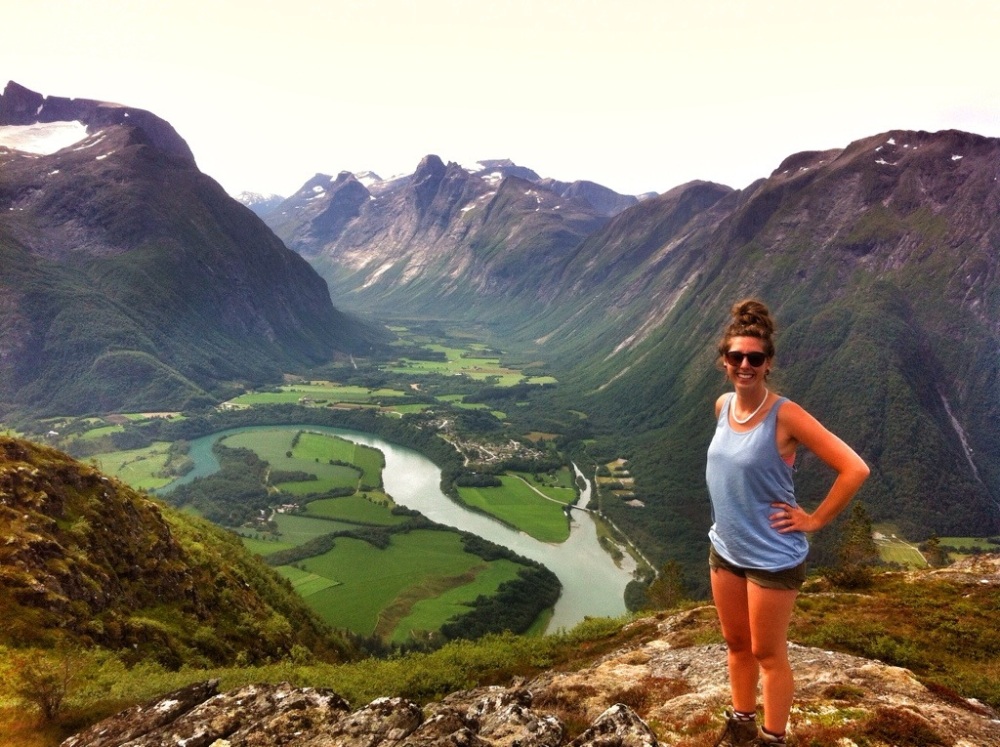