It was time for us to leave the east coast of Taiwan and explore a bit of the west and to get there we needed to catch a couple of trains. We could of made it there in a few hours by catching the high speed railway that can travel up to 330kph but we opted for the cheapest option which was on the slow local trains. Northern Taiwan seems to be a magnet for bad weather so after 5 days of sunshine in Hualien we watched out the train window as it turned from blue skies to miserable rain. We had to change trains in Taipei and the next one to Taichung was designed like a metro so there was plenty of standing space but hardly any seating which meant we had to stand for the first 45 minutes of the 3.5 hour journey. The whole travel day ended up taking almost 8 hours but it cost us just £12 per person so we certainly weren’t complaining. We checked into a nice room situated right by a bustling night market but tucked away from all the noise. This time we tried some different street food; the first item was a sort of waffle batter poured into a fish-shaped mould and filled with either red bean paste of sweet potato. We ended up waiting about 15 minutes for ours to be cooked so it appears street food isn’t necessarily fast food in Taiwan. Craig made a bee-line for a man selling homemade chips which were really tasty but not exactly a dinner meal. Luckily we found something more filling which was a stall selling delicious roti style wraps, smacked voraciously to get the best layers and flakey texture. Then it was filled with toppings so I got a cheese omelet in mine and Craig had chicken. For dessert we found a chap selling a delicious sort of ice-cream burrito. It was a thin, papery pancake topped with freshly shaved peanut brittle, vanilla ice cream and fresh coriander. It was so tasty and refreshing, the coriander was a strange add on but it really worked. All of the food was washed down with my favourite bubble tea so far, from a shop called Tiger Sugar. It was sweet and creamy with tapioca balls, brown sugar syrup and grass jelly. 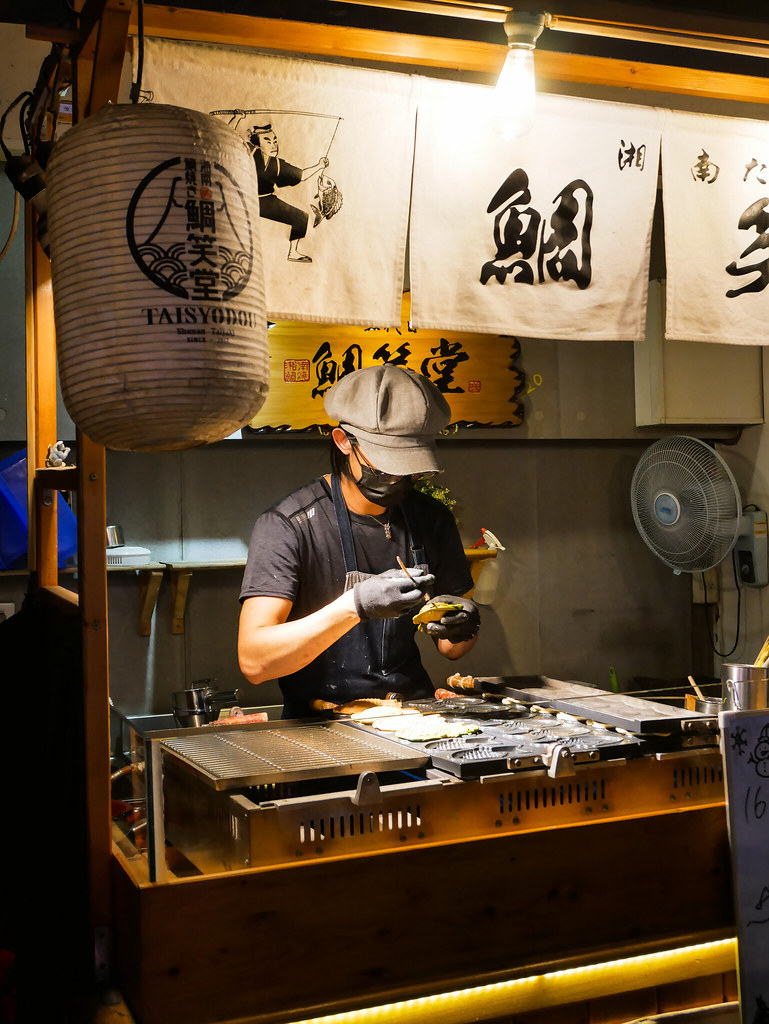 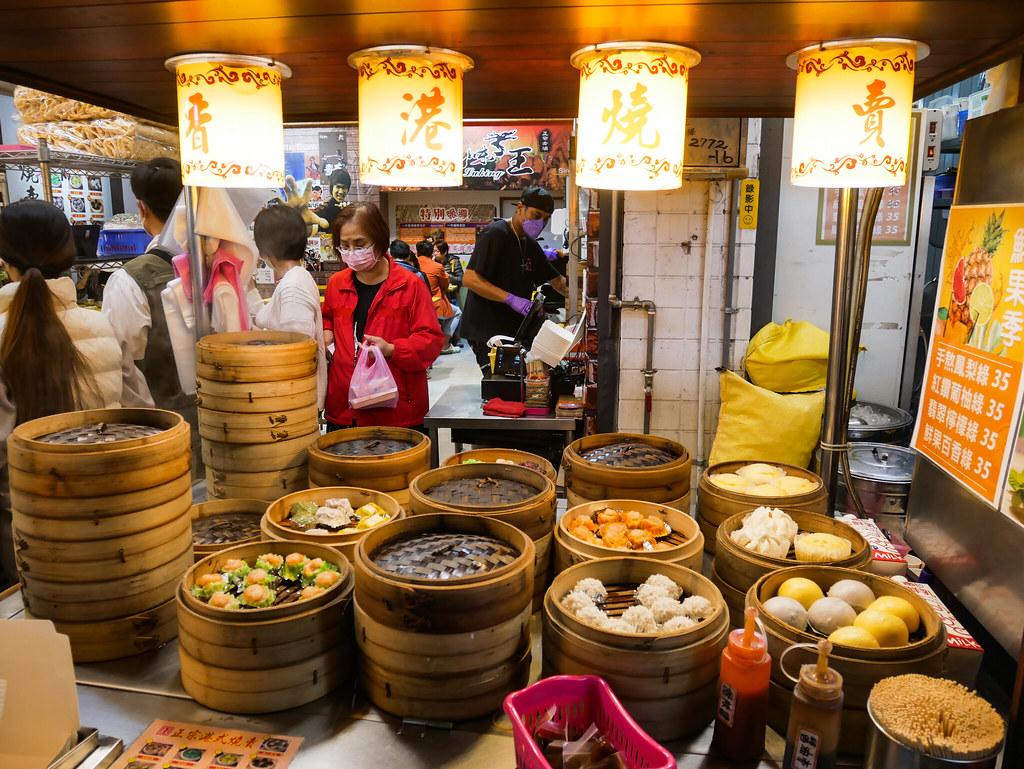 For our first day in Taichung we caught a free bus an hour out the city to see the Flower Carpet Festival in Xinshe. It was only a small area but it was filled with a kaleidoscope of beautiful flowers and colourful statues. After taking lots of photos we left the crowds and headed towards the hills to do a hike along the Dakeng trails. They’re pretty unique as the trails are made up of wooden logs, which look really cool but in reality are just awkward to walk on. While I was researching the hike I came across a story about a family who visited the area and discovered a little girl in red had been following them when they watched their video footage back. But she wasn’t there in real life, just in the video, which is spooky enough but soon after seeing the girl in the video one of the kids of the family suddenly died. Needless to say it creeped me out and apparently there’s now a film called Tag Along which is based on this true story. It wasn’t the best hike, we did a few different trails and the views weren’t anything special but I think the east coast of Taiwan spoilt us. 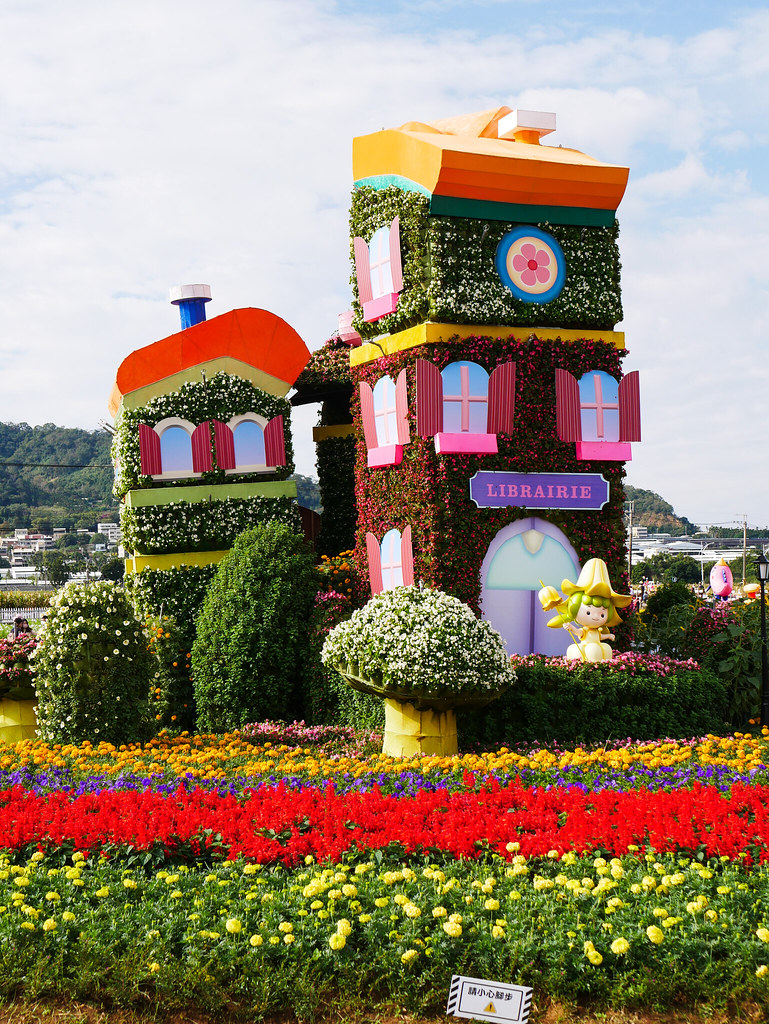 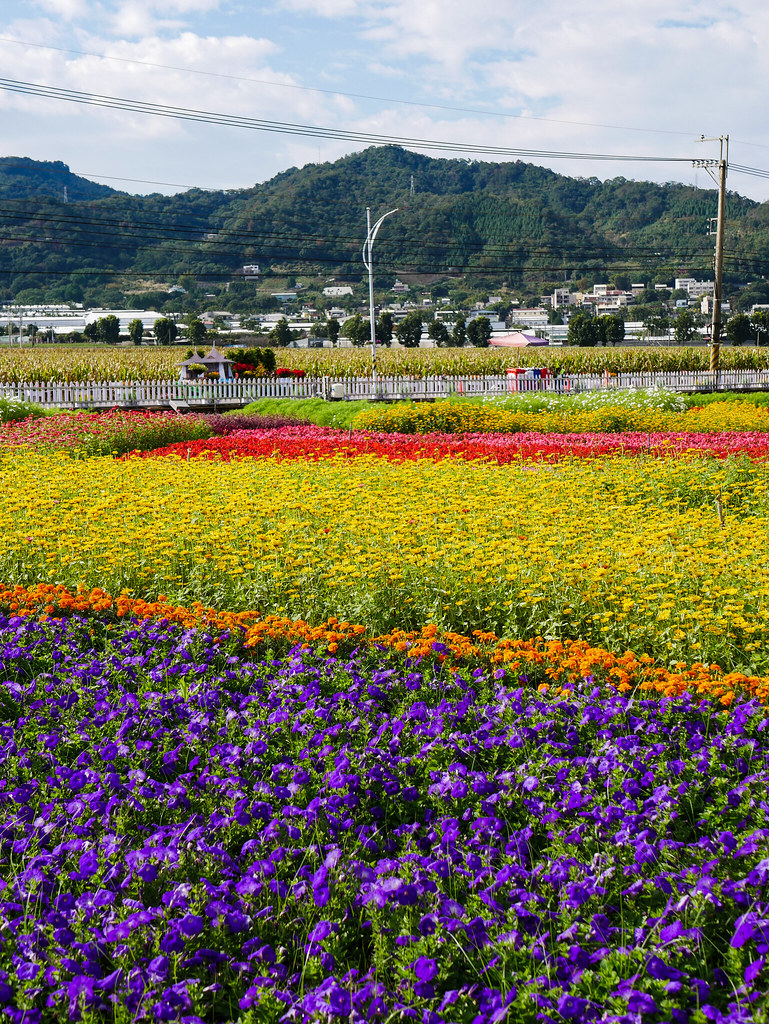 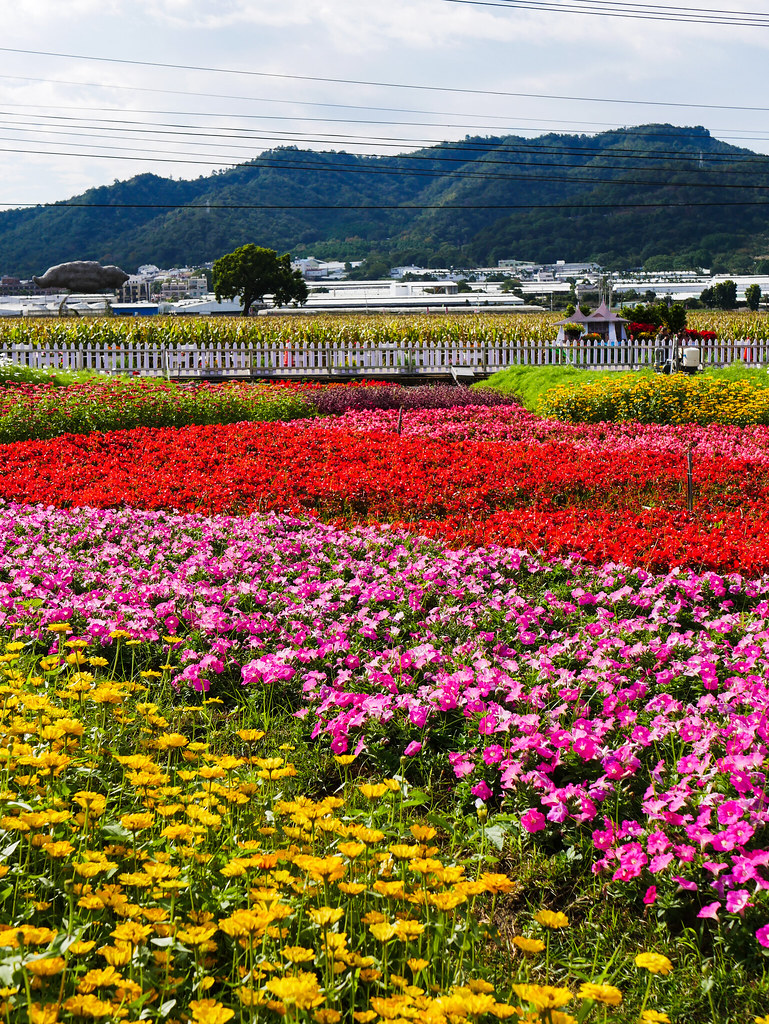 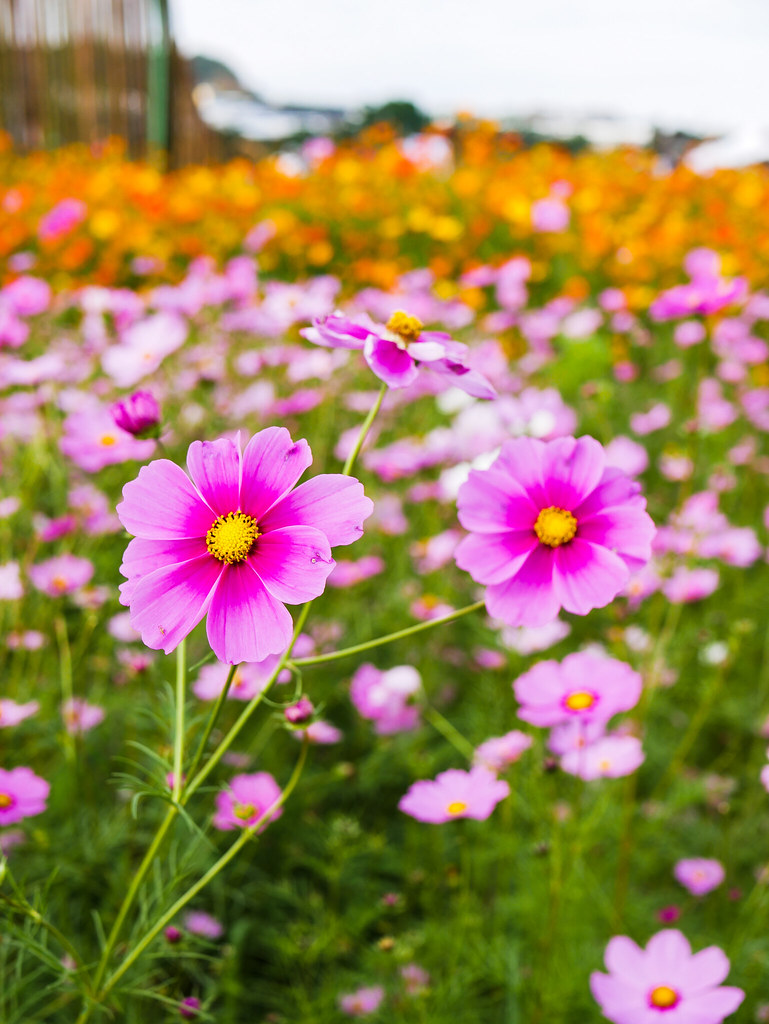 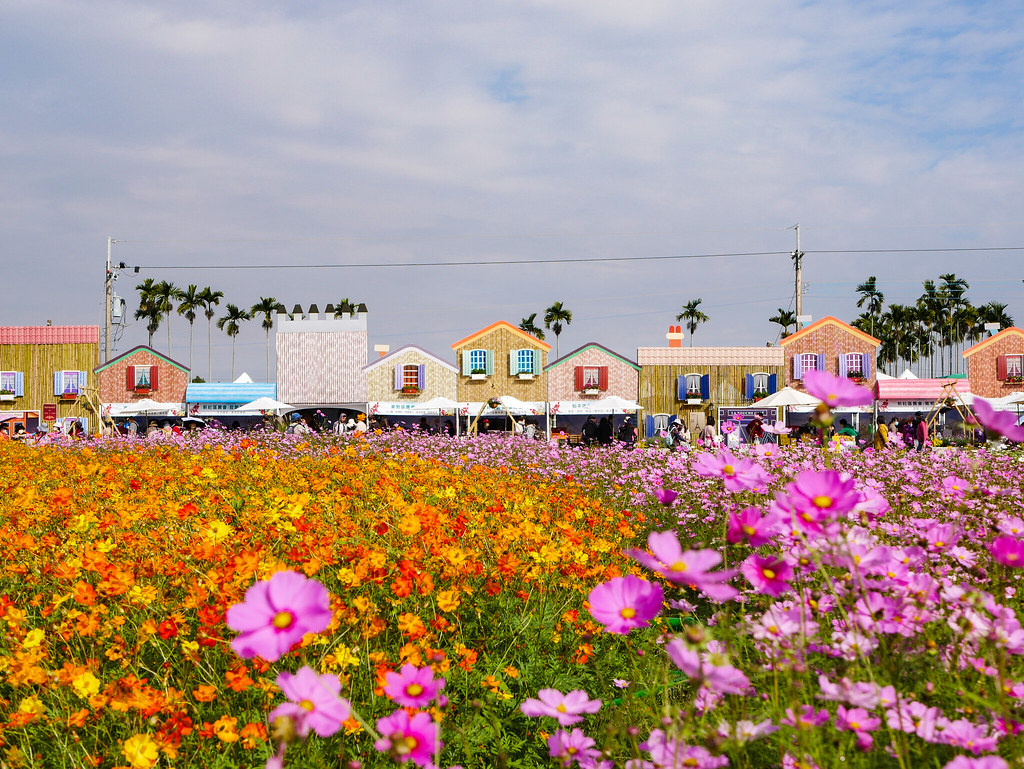 As we finished the hike we passed some locals who said in broken English that we could use a huge bamboo pole with a net on the end to pick our own fruit from this tree. The owner of the tree had a little sign with a honesty box to pay 15p per piece of fruit you pick. The locals said to pick a yellow one but it was very hard to see when we were shoving a stick 5 meters up a tree. Craig managed to get a fruit on his first attempt but the locals sighed a little at the one he’d picked “need more yellow….let it sleep”. This was their very sweet way of saying to leave it overnight to ripen, however 5 days later it hadn’t become anymore yellow so Craig cut the mystery fruit open and tried it. He said it was “dry, bitter and tasteless” but at least we had a fun time picking it. 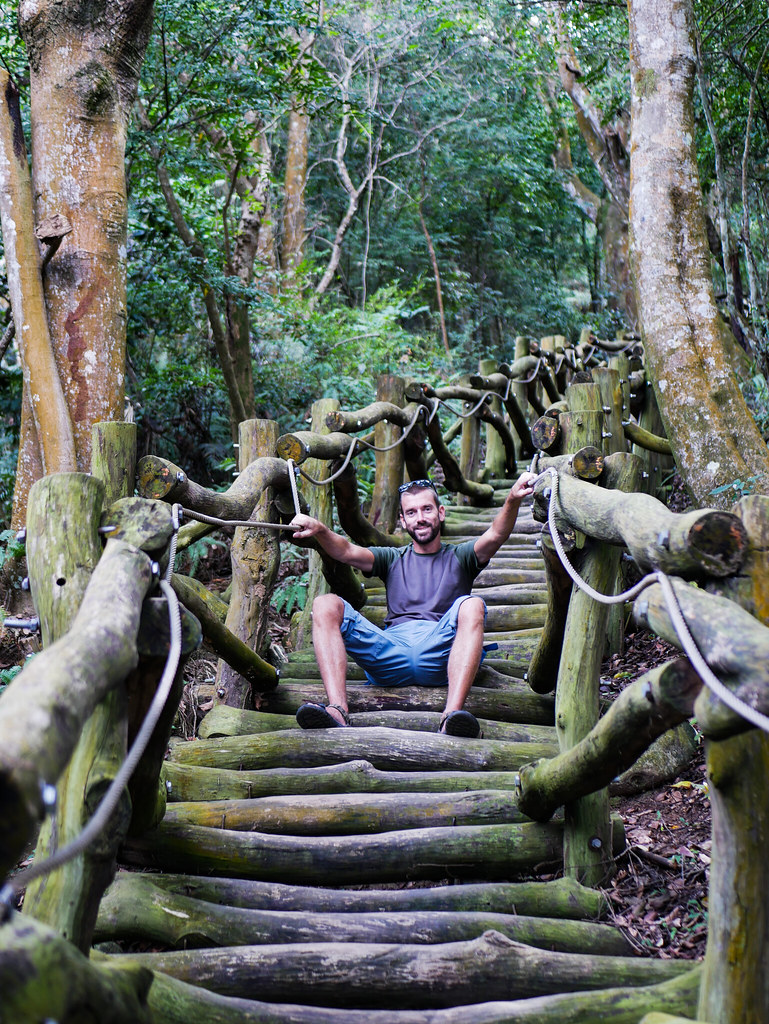 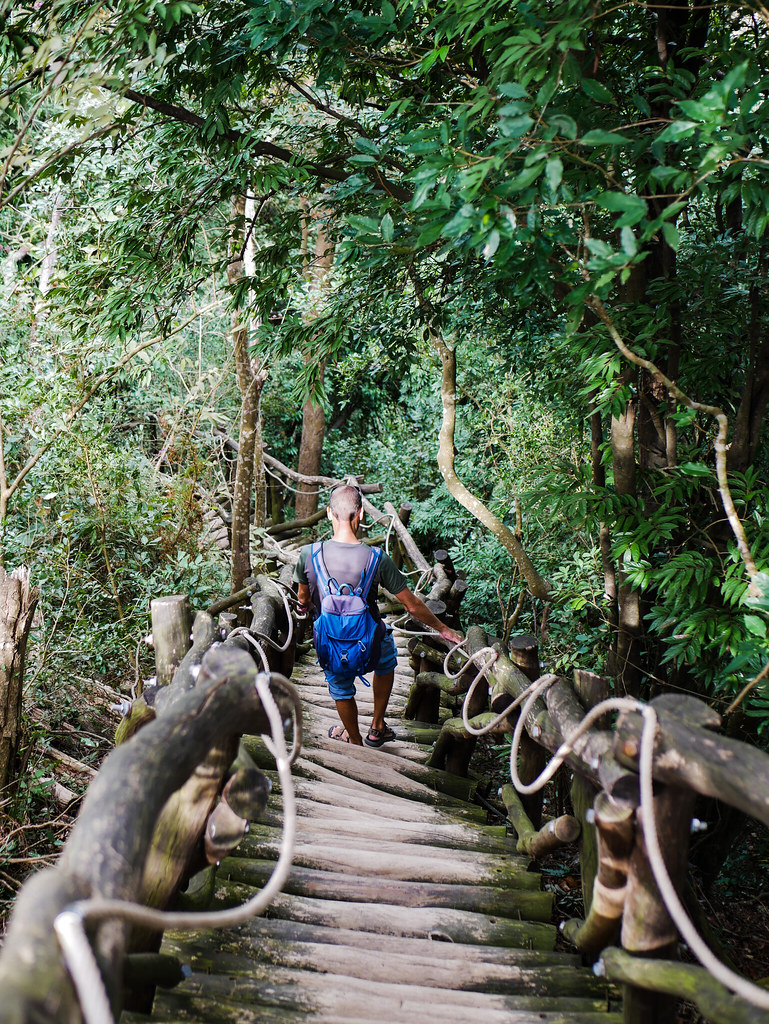 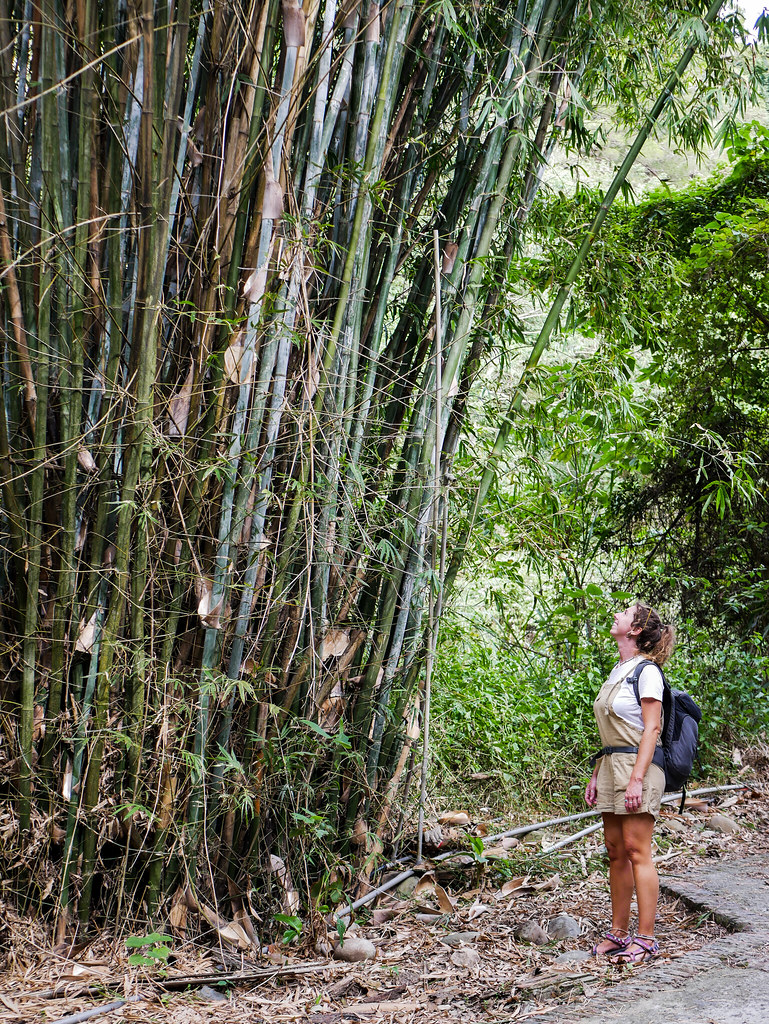 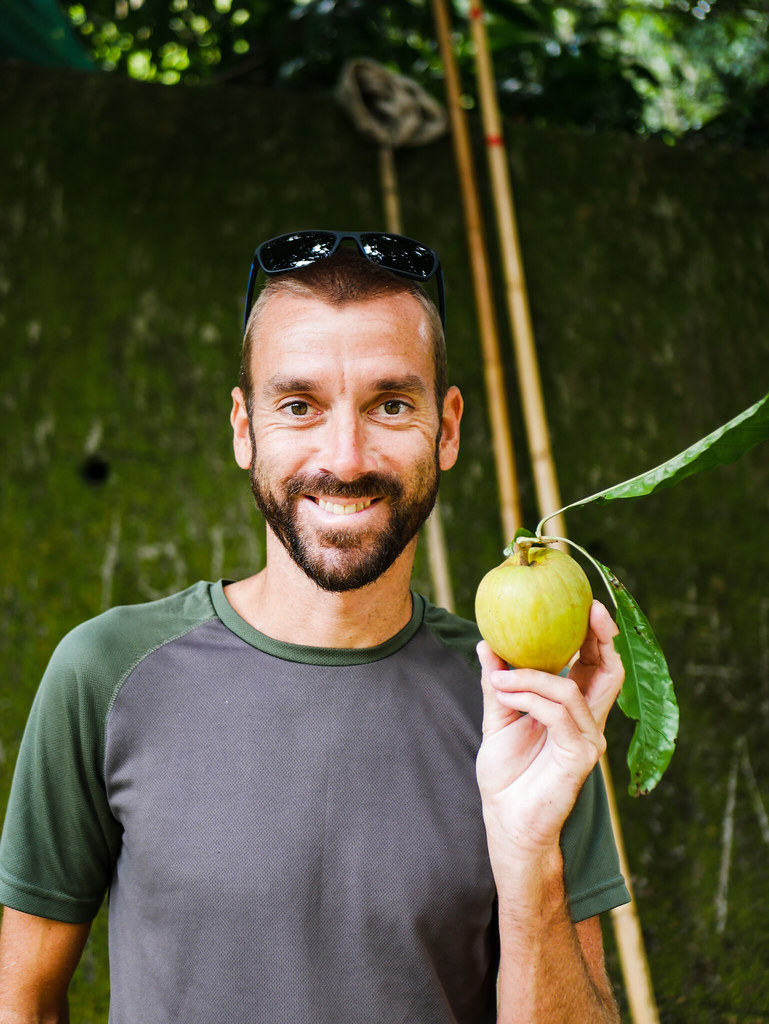 While in Taichung we checked out a few sights in the city like Miyahara, an old ophthalmology clinic that was partially destroyed by an earthquake but is now a quirky retail space that’s said to have a Harry Potter vibe to the building. I didn’t really get the hype, it was much smaller than I expected but we had a little stroll around and gawped at the shockingly high prices for sweet treats. We also walked to the Painted Animation Lane, an alley filled with paintings of cartoons like The Simpsons and Super Mario. An hour bus ride away was the Feng Chia Night Market, said to be one of the biggest in Taiwan but we thought the food options were a bit limited. I think when they say the biggest it isn’t referring just to food stalls but all of the clothes shops etc in the area. 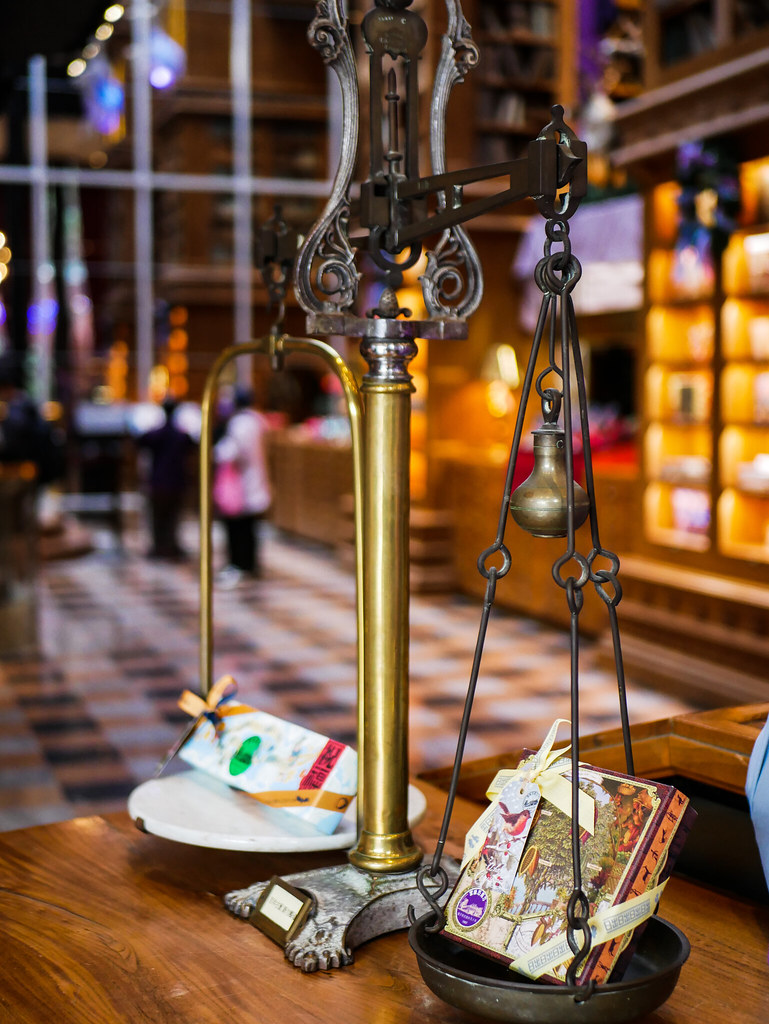 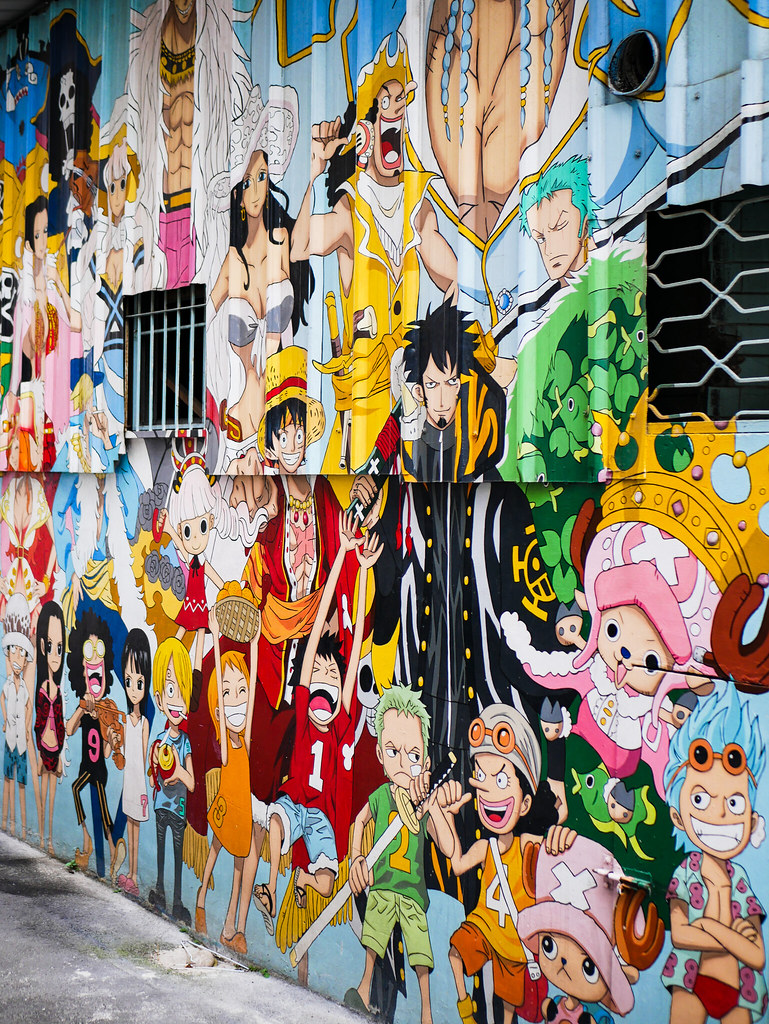 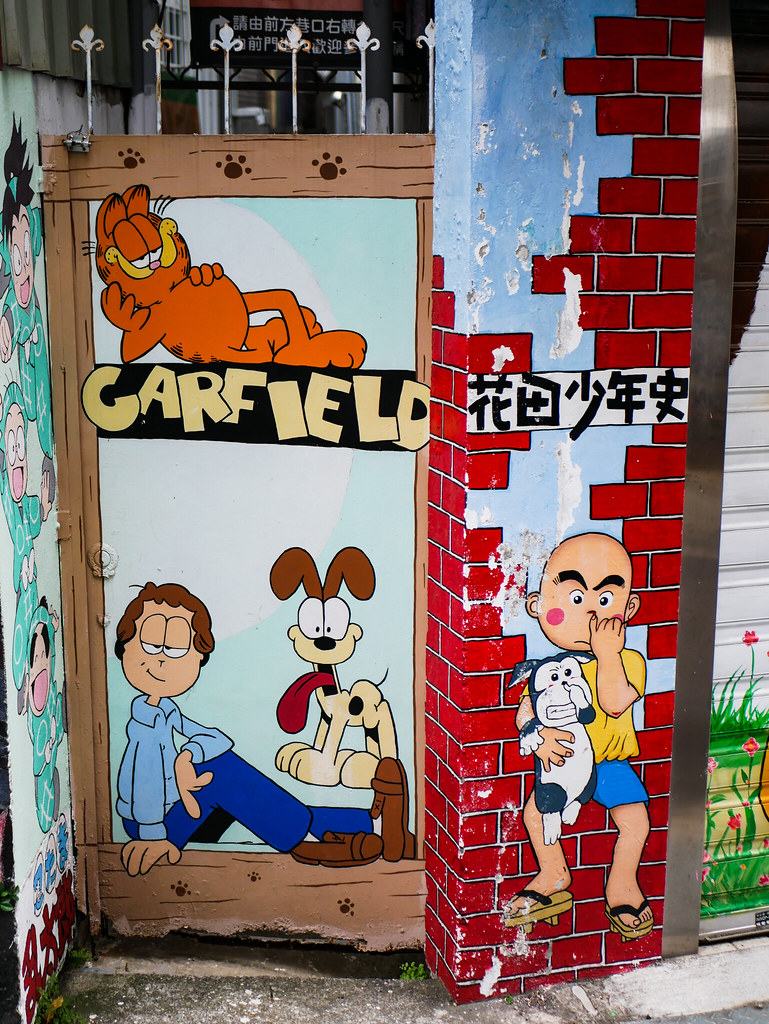 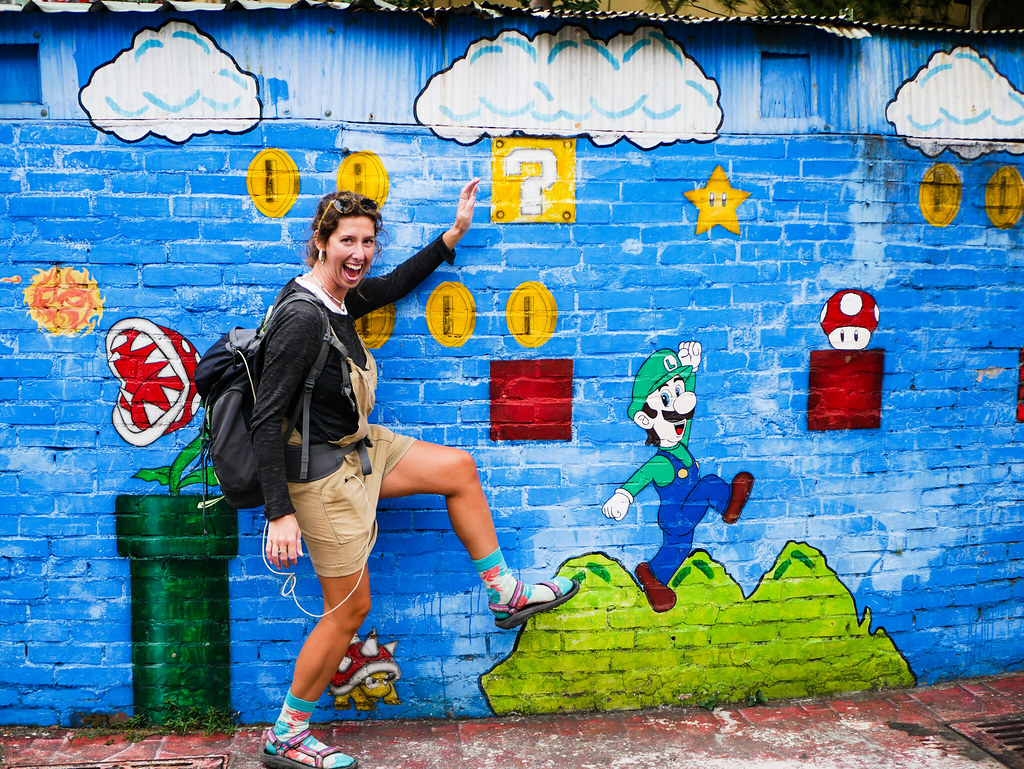 Our final sight for Taichung was a visit to the 912 Earthquake museum. The museum is set at the location of a school that was destroyed on the 21st of September 1999 by a 7.3 magnitude earthquake which was the second most deadly earthquake to hit Taiwan, killing 2,415 people and injuring 11,305 more. We read that with every one magnitude the earthquake becomes 32 times more powerful. So this 7.3 earthquake that hit Taiwan was 1024 times more powerful than the magnitude 5.1 earthquake that we felt a few days before….which is just mind boggling. Aftershocks were felt across the island, and the school we were standing in front of was built right on the fault line which meant the school running track rose up 2 meters. The school collapsed like a row of dominos, layers of concrete rested atop one another and the reinforced steel columns were crushed like an accordion. Luckily the earthquake struck in the middle of the night so no children were at the school and remarkably a new school has been built just 50 meters behind the old one, so the kids literally look out their window and see their old school in crumbles. The good news is that they have new building methods now and huge rubber rings are placed at the bottom of the foundation so that the building has flexibility to sway with the earthquake. We also got to go in a free simulator to feel what the earthquake was like, along with 20 school kids! There was a projector screen that wrapped around the room so it looked like we were inside a modern apartment. Suddenly the room began violently shaking, the food being cooked began to fall off the hobs which caused the flames to start spreading, glasses were breaking, everything fell off the shelves etc. Then it calmed down for a moment and they showed the benefits of a smart-home with earthquake warnings, this way the gas automatically shuts off, the tv is hinged to the wall safely etc. It was really interesting to experience the earthquake and when the lights all came back on a little school boy looked at us and said “you OK?” which was very sweet. 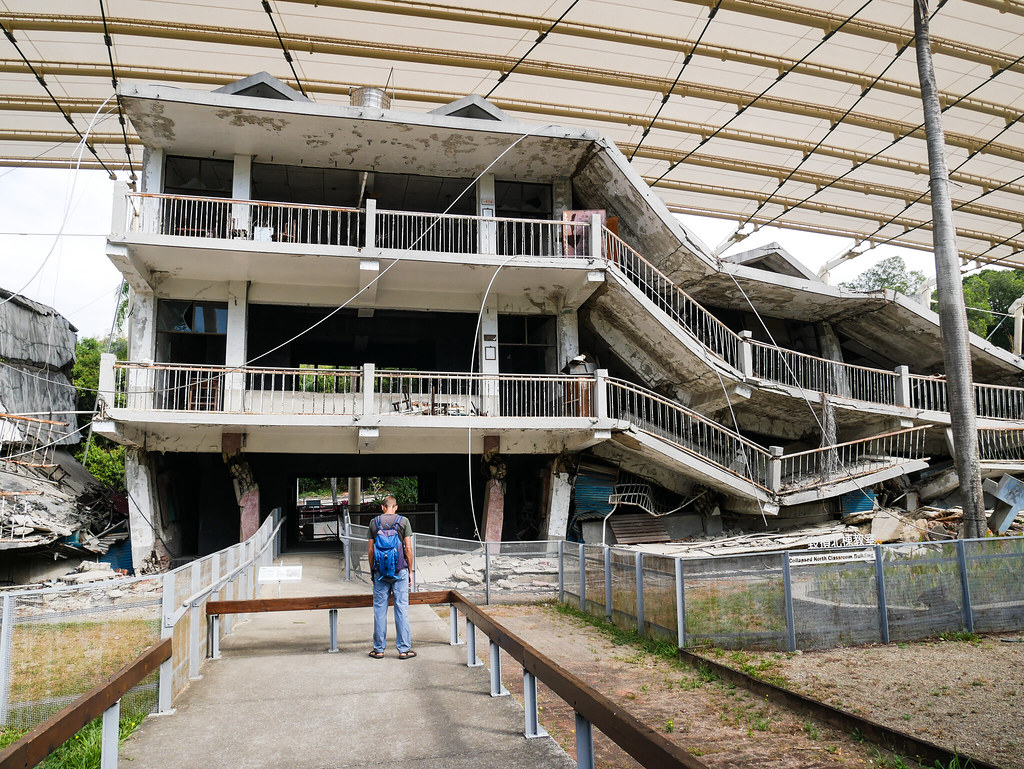 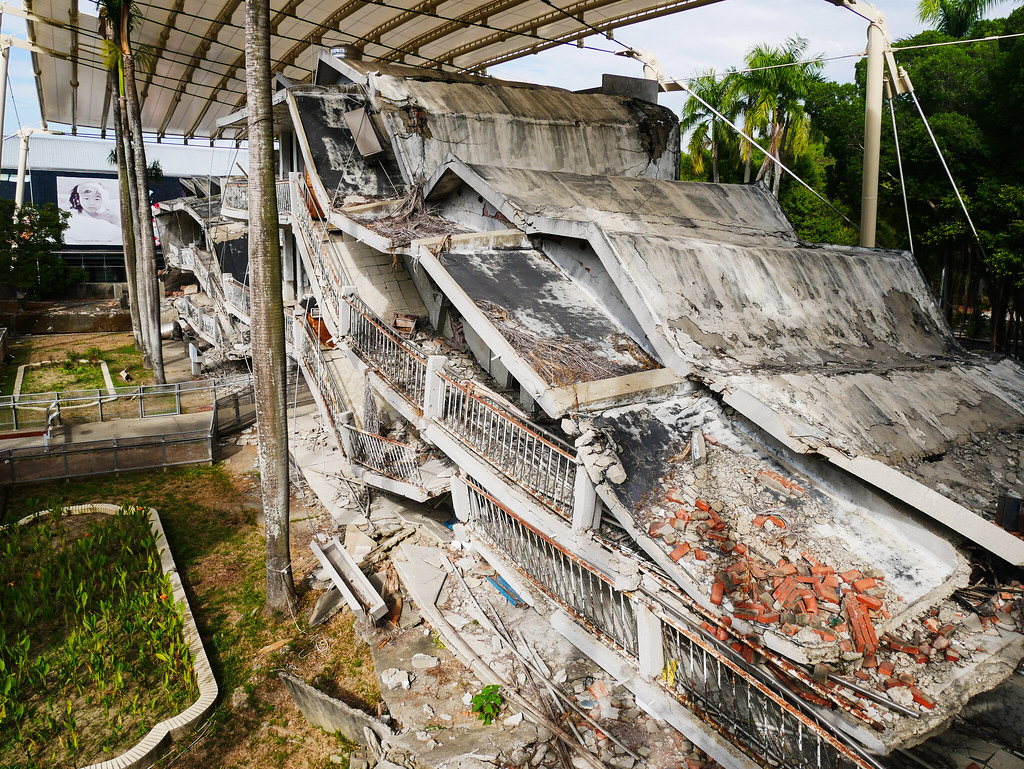 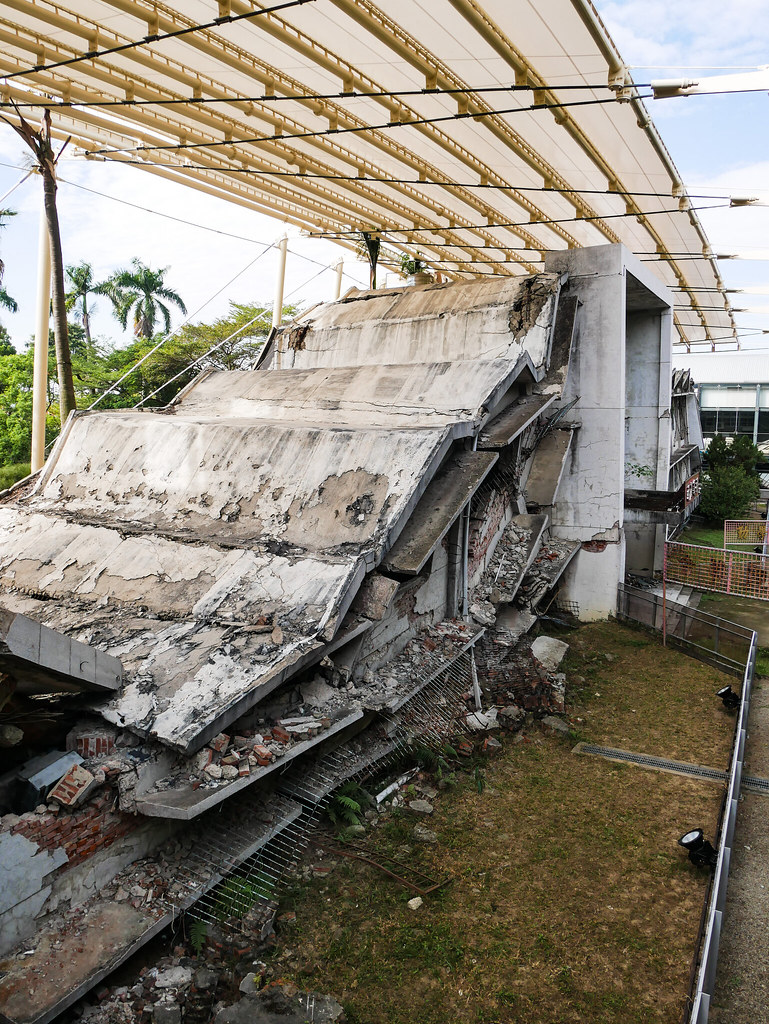 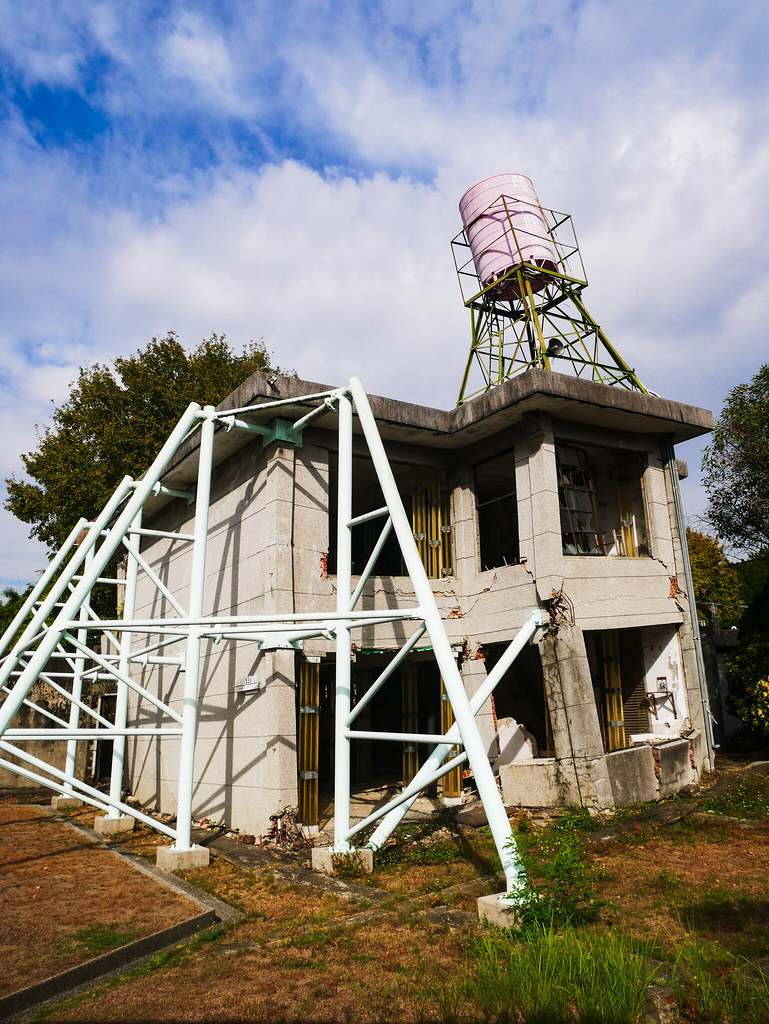 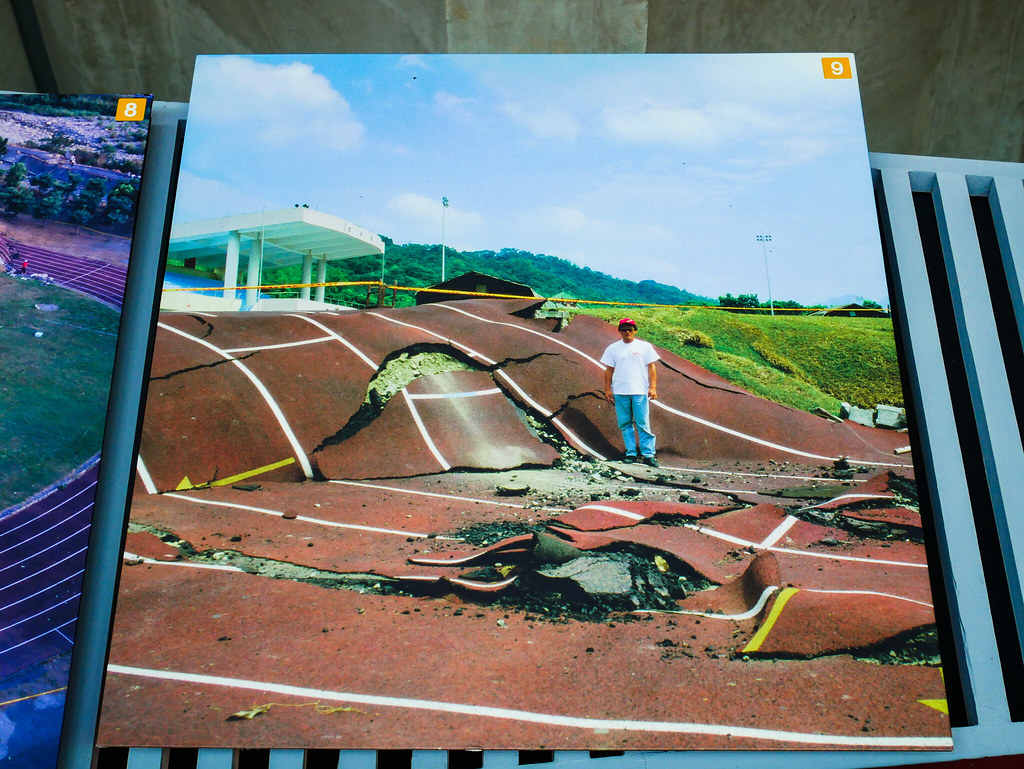 A few hours from Taichung is Sun Moon Lake, one of the ‘must visit’ destinations in Taiwan so we headed there next. Sadly the weather wasn’t great for our two night trip. We stayed in Ita Thao, a little town at the south of the lake, home to the Thao people. I read that their ancestors were from Alishan and they chased a white deer all the way to a far away lake where they found an abundance of fish so they went back to Alishan and brought all their tribe down to the lake where they now reside. The lanes around the town had lots of street food selling local delicacies like tea soaked eggs or fruit flavoured vinegar. We tried scallion pancakes which I’ve been meaning to try for awhile but just before it was served to me the worker smeared a soy sauce style liquid over it and I couldn’t stand the flavour. The lake is very touristy so prices in restaurants were really high but we managed to find some basic noodle soup where a very grumpy man reluctantly served us. It didn’t fill me up so I got some barbequed mochi with condensed milk as I really liked it last time. Not only was it more expensive than the one I had in Hualien but it was half the size AND the lady didn’t sprinkle it with nuts, she sprinkled it with cheese. Boy was I pissed off when I took that first mouthfull “for fucks sake, she’s covered it in parmesan cheese, who the heck thought cheese and sweetened condensed milk was a good combo?”. It was a strange town, everyone seemed a little grumpy towards us which was very different to the friendly vibe we got elsewhere. 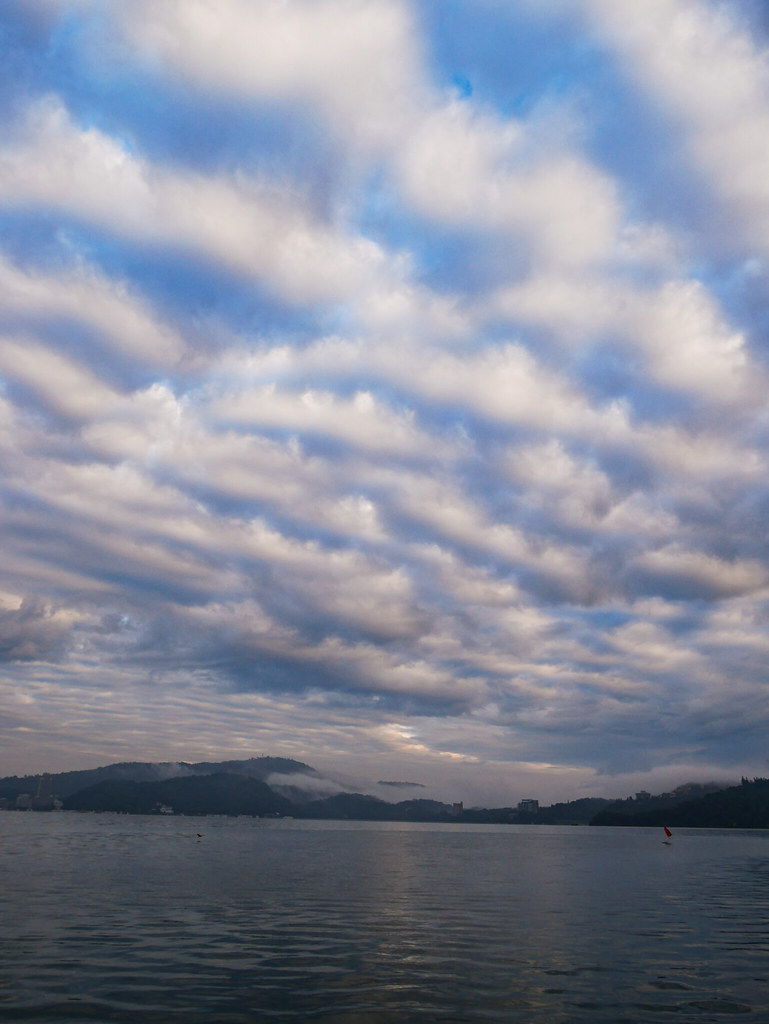 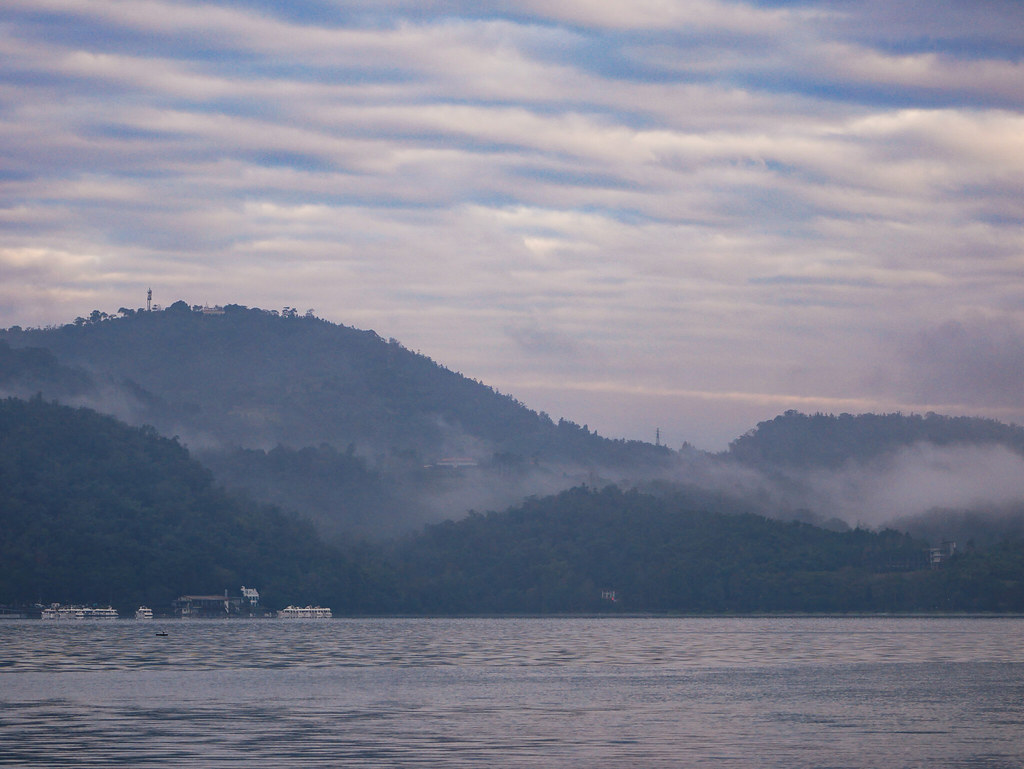 The following day we woke early to catch the first bus to the north of the lake where we hiked uphill, past tea plantations and a thick forest to a viewpoint over the lake to hopefully see the sea of clouds. Well, clouds we most definitely saw! It was a complete white-out as we were surrounded by thick fog. We waited over an hour for it to clear but to no avail so back down we went. We had planned on renting bikes and cycling around the lake but there wasn’t anything to see in this weather, the lake pretty much vanished so we hopped on a bus to Wen Wu Temple which was really beautiful with many different buildings, typical terracotta tiled roofs and intricate details inside with colourful paintings and statues. The temples climbed up the hillside and we should of had the blue lake as a nice backdrop but the weather deteriorated even more and we now had rain as well as fog! It wasn’t exactly the experience we’d hoped for but ya can’t have it good all the time. I’m just very grateful we had hot weather and blue skies for all of the wild swimming we did around Hualien. Now it’s time for us to make our way to Taipei and explore the rainy north. 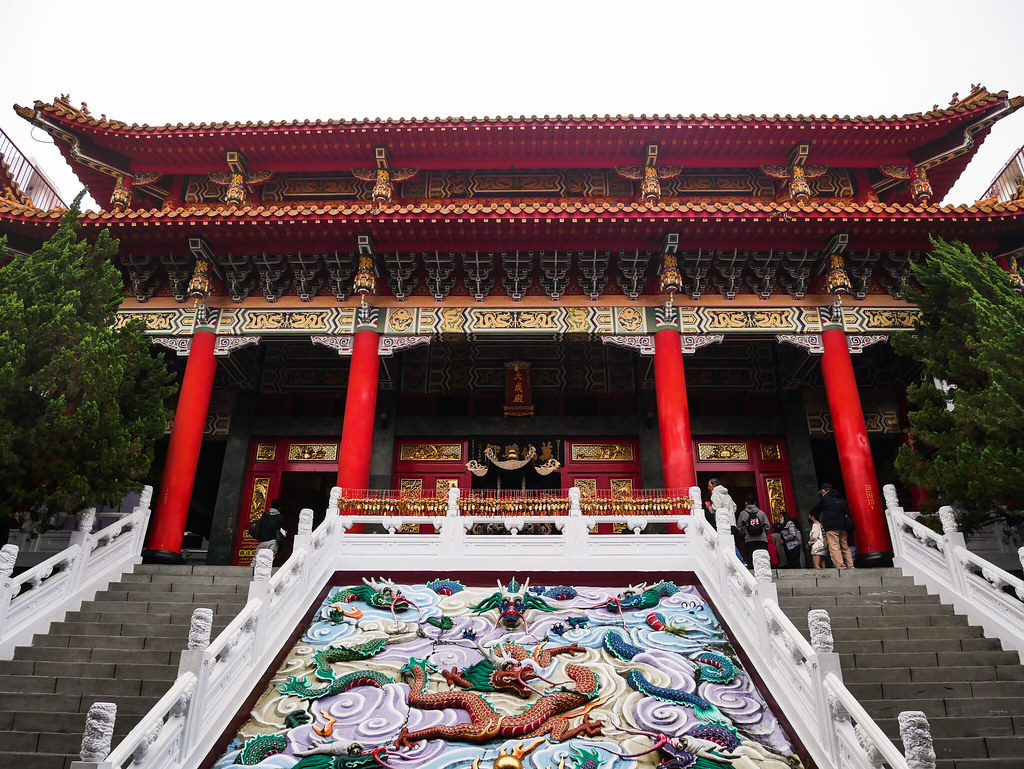 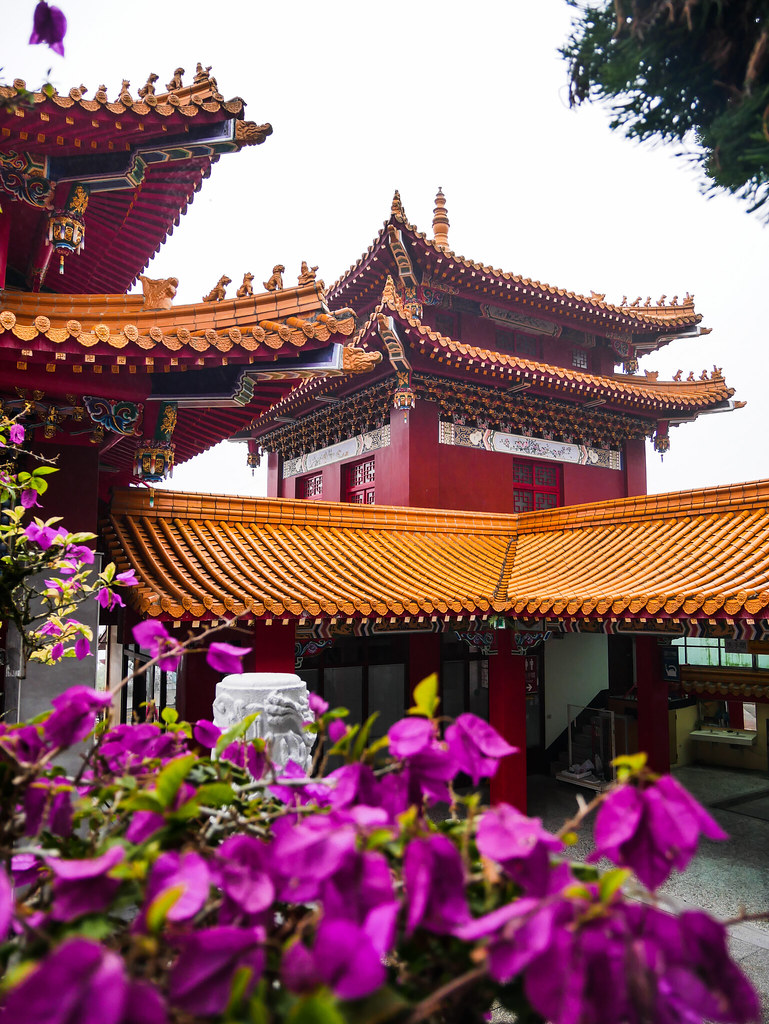 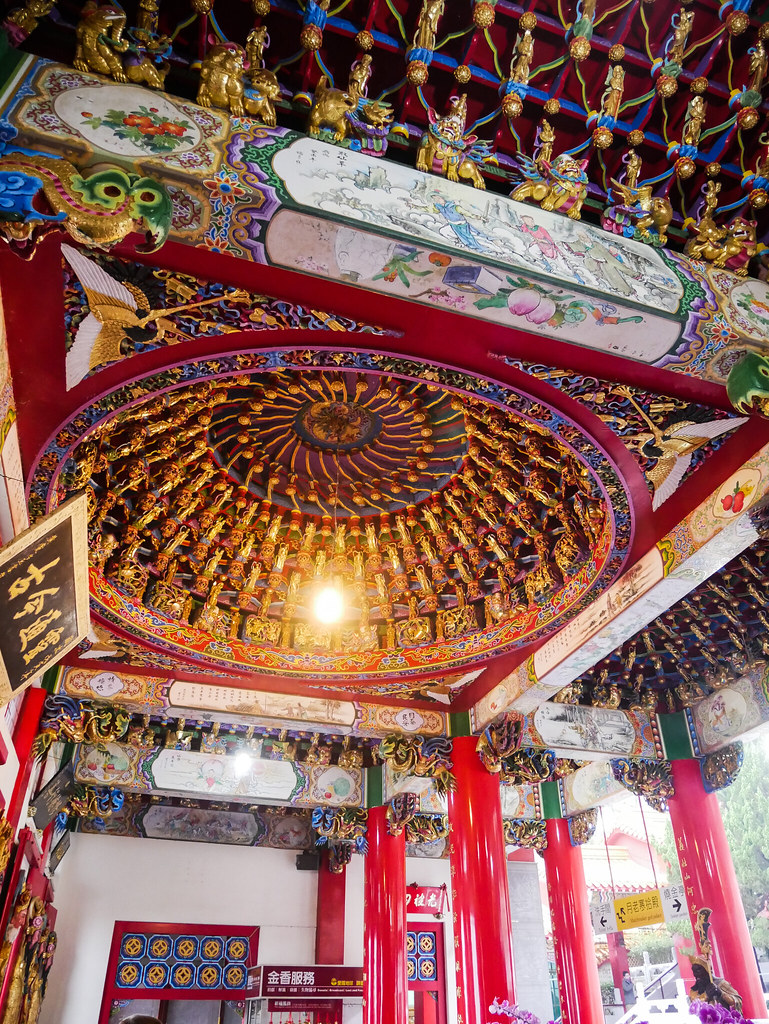 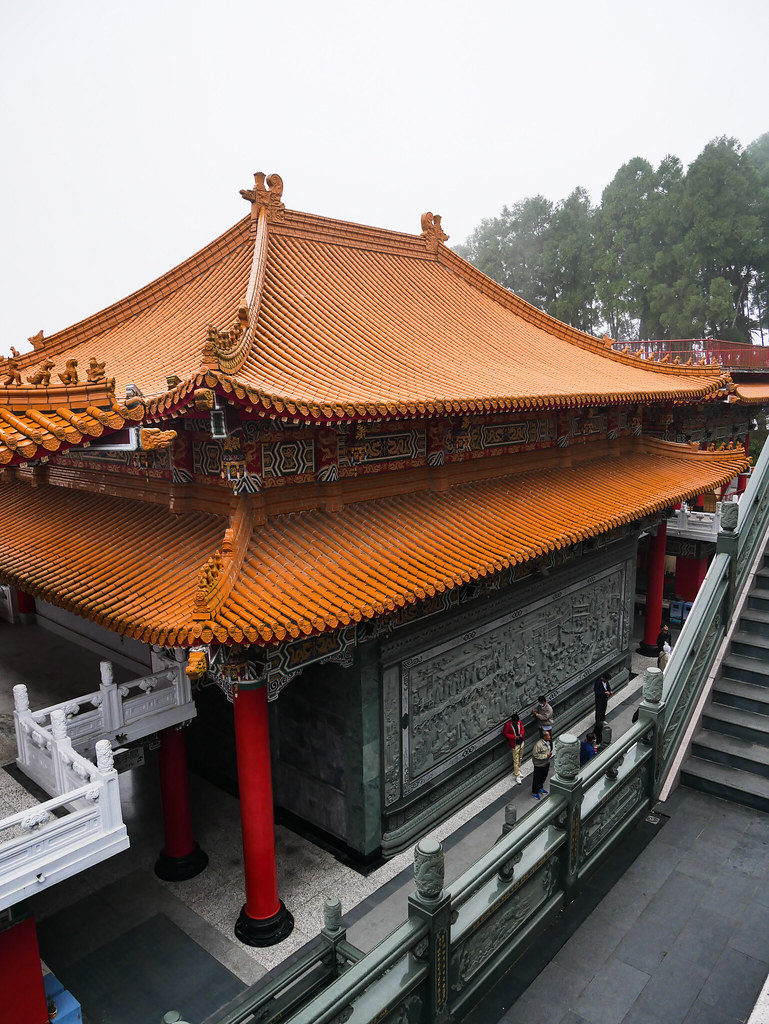 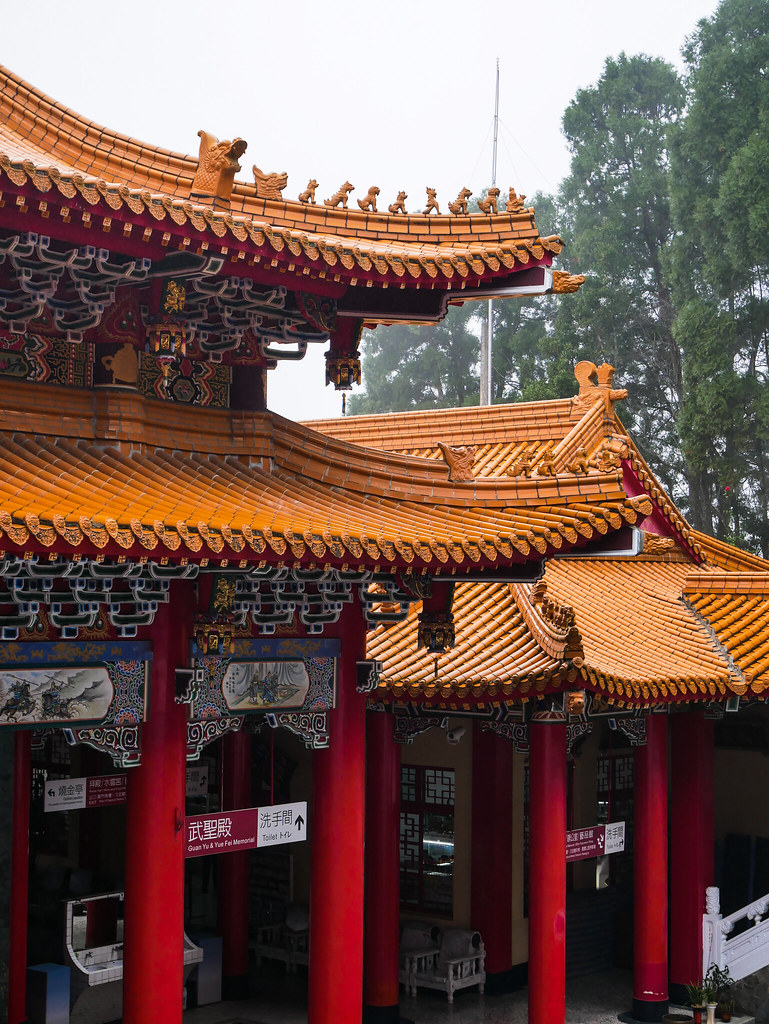