We’ve been putting Southern Africa off for many years due to safety issues and whenever I read the FCO government website it instantly puts me off as the crime is extremely violent. But we have to remember we’re not the first tourists to visit and we can’t let the scary stories put us off. So when an opportunity arose to join a family friend on his holiday to South Africa we couldn’t resist. We’d be able to join him for a few weeks of game drives in Kruger National Park and it meant we could have an easy and safe introduction to the country. We would have to fly into Johannesburg which gave me anxiety after reading about people being followed from the airport and robbed but it wasn’t so bad in real life. Immigration took ages though so by the time we went to collect our bags the conveyor-belt had stopped moving and there was no luggage left. I thought someone had come along and stolen our bags so we went to the baggage enquiry and thankfully saw our backpacks sitting in a trolley.

Waiting for us at the arrivals hall was Gray who we’ll be travelling with for the next few weeks, and his friend Lukas who’ll be joining us on the trip. Lukas welcomed us in Afrikaans and Gray explained that he doesn’t speak any English so he’ll have to translate for us…which is going to be interesting for the next few weeks!! We headed through the airport to the carpark and tried some small talk with Lukas including charade-style conversations along the way. When we exited the car park they both spoke in Afrikaans but then we heard the word “lynx” as they pointed left – at which point Craig and I looked left searching for a wild cat but it tuned out that lynx translated to left and was just a driving instruction. As we drove along the main highway they both began roaring with laughter and said they couldn’t keep it up anymore, they’d been lying and Lukas did in-fact speak fluent English. It was pretty funny to be fair and he said when I was doing charades to communicate he had to stifle a laugh through his hanky and make it sound like a cough.

They drove us to an apartment in Pretoria which had a security gate at the entrance but the level of security was questionable as we just said we booked apartment number 400 on booking.com and they let us in. We went to step in a lift but they called us back “don’t take that one” they said as the lights weren’t working, luckily the other lift was illuminated. Outside every apartment door was an additional accordion style metal fence for extra security. The power suddenly went out which is due to the ‘Low Shedding’ they do in South Africa to save power. So not only was our shower cold because we didn’t know how to turn the boiler on but it was taken under a very weak torch light, but hey, we’re both very happy to be here.

The following morning we woke early to join Gray on another drive to the airport, this time to pick up Craig’s brother, Neil. It’s funny how I was so concerned about arriving at Johannesburg airport yet here we are, voluntarily going back. It felt safe there though which was good as we ended up having to wait an hour and a half for him to arrive.

Our plan for the next few weeks is to stay on the outskirts of Kruger National Park and do plenty of game drives. Our first stop was going to be Marloth Park, a game reserve you can stay in but it wasn’t near any supermarkets so we needed to do a big food shop first. A huge part of South African culture is having a Braai (a bbq to anyone else) and it involves a shit-load of meat. So the lads bought their steaks and sausage while I shopped for vegetarian meals for myself. In the supermarket car parks were men in fluorescent jackets who were basically self-employed security. They just hang around the carpark and take it upon themselves to watch over peoples cars in exchange for a tip. Apparently having them there keeps the thieves away. They were all very smiley and jolly, pointing us in the direction of our car when they saw us exiting the shop, even though we knew exactly where we were going.

Somehow it took us hours to do the food and alcohol shop but eventually we finished up and headed out for dinner at an Italian restaurant. I was pleasantly surprised by the prices, large pizzas were just £5-7 which was very reasonable so we had a tasty meal there before heading to a gigantic mall looking for ice cream as Gray has a bit of a sweet tooth. It was already 9pm so the car park was mostly empty, as was the mall, so I didn’t particularly like walking up the car park steps. When we got back to our apartment we could see the whole block didn’t have power. There wasn’t anyone at security and the gate was wide open so I felt a little uncomfortable stepping inside. We obviously didn’t take the lift so we dashed up the steps as quickly as possible and made it back to our safe haven.

Finally it’s time to head to Kruger National Park and it was a whopping drive of about 460km. We later read that tyre spiking has been happening along this road, it’s basically people throwing spikes in the road to puncture a cars tyres so they can rob and possibly kidnap them. It sounds bloody terrifying, one women said she saw a man jump out the car behind her and start running for her so she just tried to drive with the split tyres and managed to make it to a gas station. Luckily we had a trouble-free journey and made a few stops along the way, the best of which was a gas station which backed onto a game reserve. It was such a crazy place, the whole terrace and cafe had views over a waterhole where dozens of African animals were roaming. The toilet was probably the best I’ve ever been in, with a huge glass window to see the animals and each cubicle had glass windows too so I could watch rhinos while using the loo. 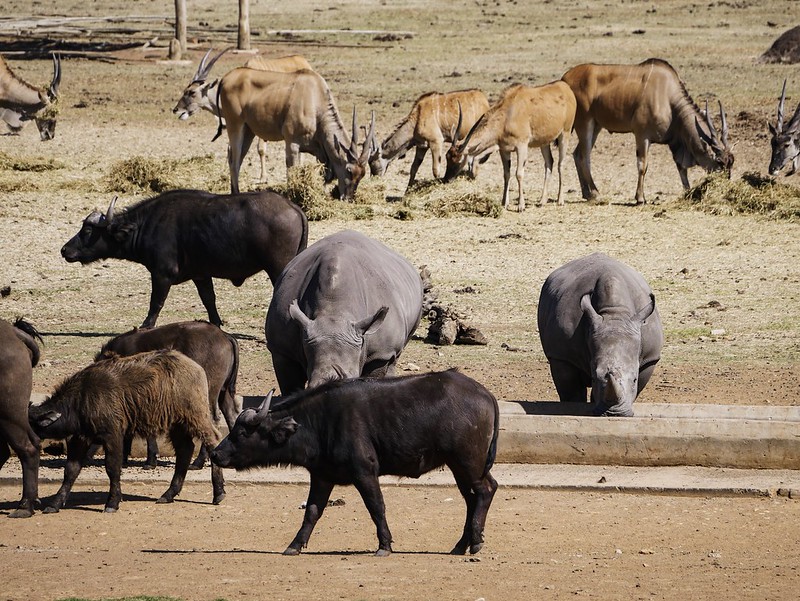 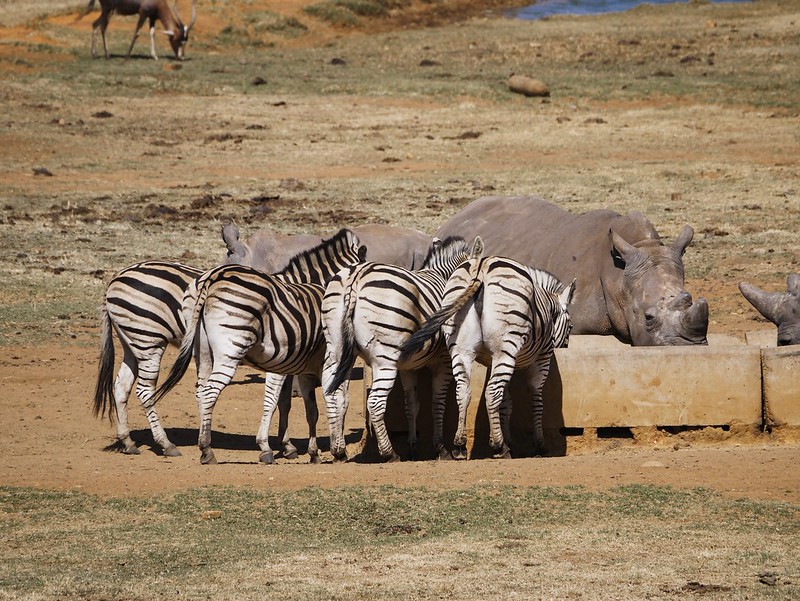 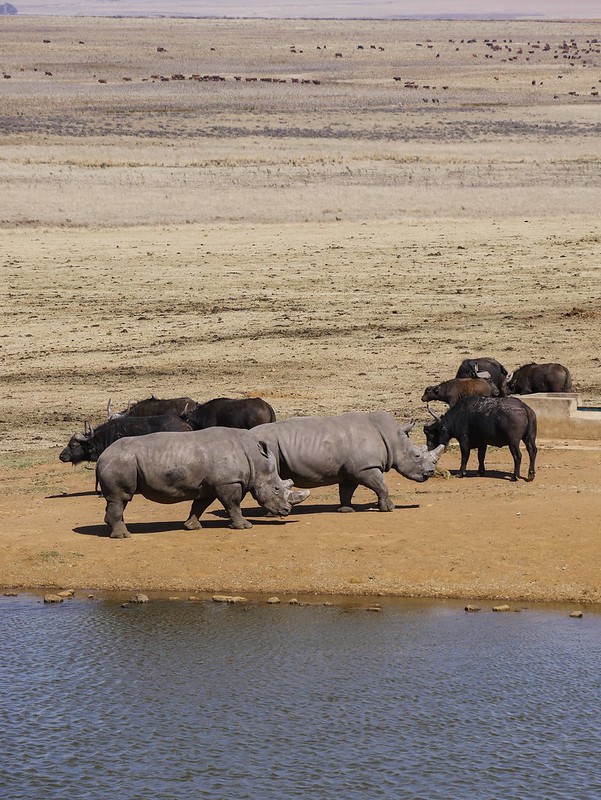 Our destination for the day was Marloth Park, a game reserve on the edge of Kruger National Park which had accommodation inside. We’ve never been to South Africa so had no idea what to expect but it was a whole little village with holiday lodges, resorts, a small gas station, shop and restaurant and because it’s a game reserve there were wild animals roaming around. As we checked in we were warned that six lions were roaming the area and to be vigilant…remarkably we’re allowed to walk around the reserve so there’s always a chance that we might witness the lions while on foot!! But there are strict rules to not walk at dark as it’s too dangerous.

We veered onto a dirt road to look for our lodge, following a secure metal fence which marked the border with Kruger. Straight away we saw a herd of elephants just 50m away which was very exciting. In fact as we looked around the banks of the Crocodile River we could see so much wildlife, there were elephants and antelopes all over the place!

Our lodge was a big brick house with a lovely thatched roof set back in the bush. It had four bedrooms, a lounge with wildlife inspired upholstery, a kitchen and a huge terrace upstairs. We were sharing the upstairs with Craig’s brother but the rooms (including the bathroom) didn’t have ceilings, so the walls just stopped at a normal height and then it was all open to the thatched roof which looked lovely but was very impractical as we could hear everything and the debris from the thatch covered the beds. There were a lot of warnings about baboons and we had strict instructions to never leave the windows or curtains open as they will break in and destroy the house! The lodge was set back from the river area but we could still hear the hippos snorting nearby.

We headed straight back out to buy some wood for the Braai which was very different to a typical British bbq. It was more like a big concrete table which you make the fire on and a metal grate that you swivel over the top of the fire and that’s where you cook your meat. A marinated chicken and some traditional circular sausage were popped on while I enjoyed pasta and some toasted marshmallows.

This was our base for the next four nights with our days spent doing game drives in Kruger National Park which I’ll write about in the next posts. Marloth Park was a great base though as we had wildlife wondering right up to our property. One morning a family of warthogs came onto our patio and we all sat in silence as they slowly moved towards us. 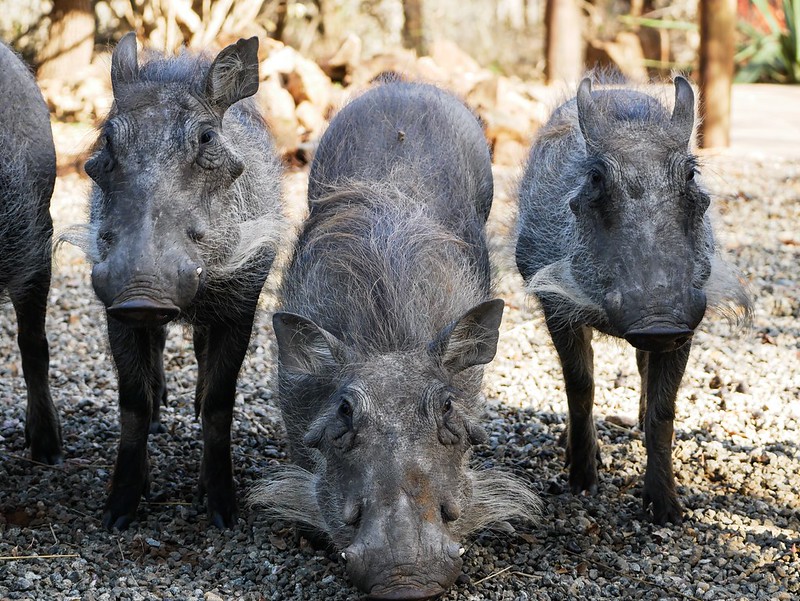 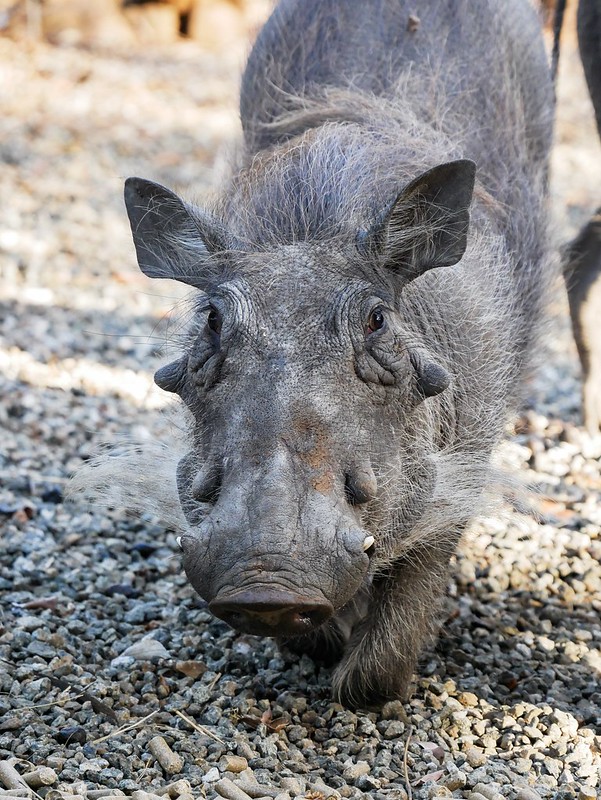 We had bucks wandering past our property too and while driving in and out the game reserve we spotted a giraffe. It was on it’s own and seeing as you’re allowed to walk around this area we decided to pull up and take a stroll with a giraffe which was a novelty. It sat down as soon as we got to him but his head was still looming high above us. Male giraffes are almost 6 meters tall which is just wild! We also saw kudos one afternoon which are big antelopes with fabulous corkscrew-spiralled antlers and pretty white tribal stripes across their back and face. I’m sure we would of seen a lot more around our property but our days were spent doing 12 hour drives in the national park searching for even more wildlife….which I better start writing about now! 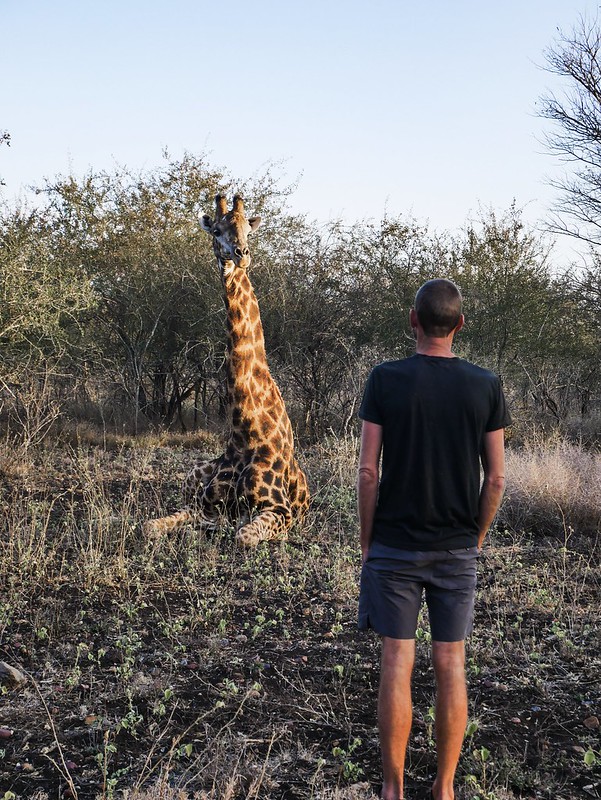 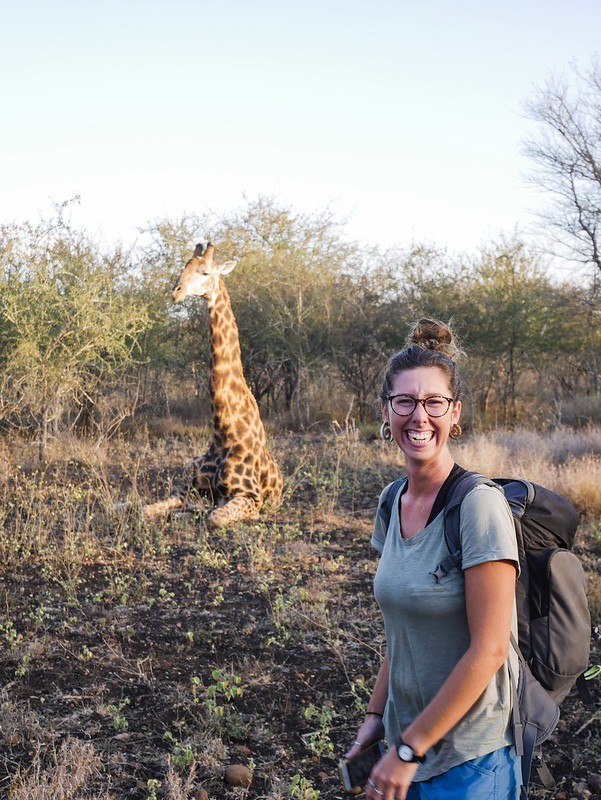 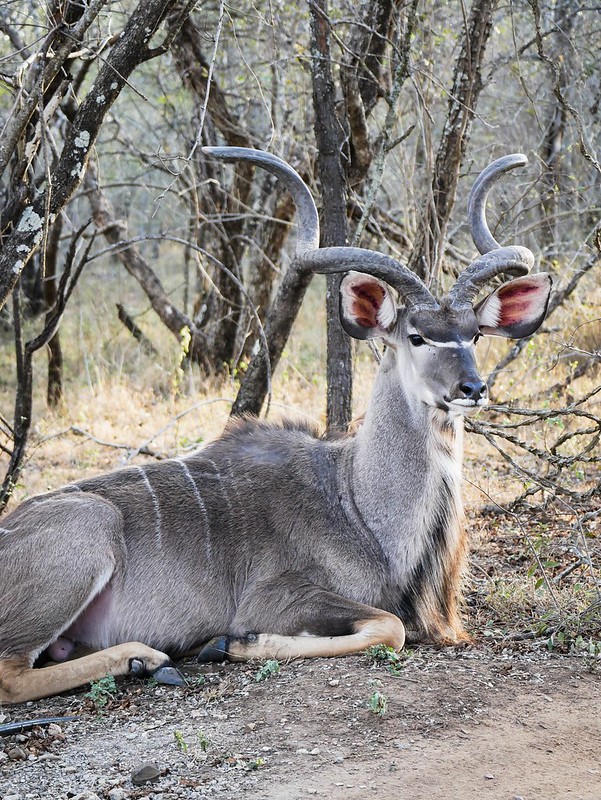 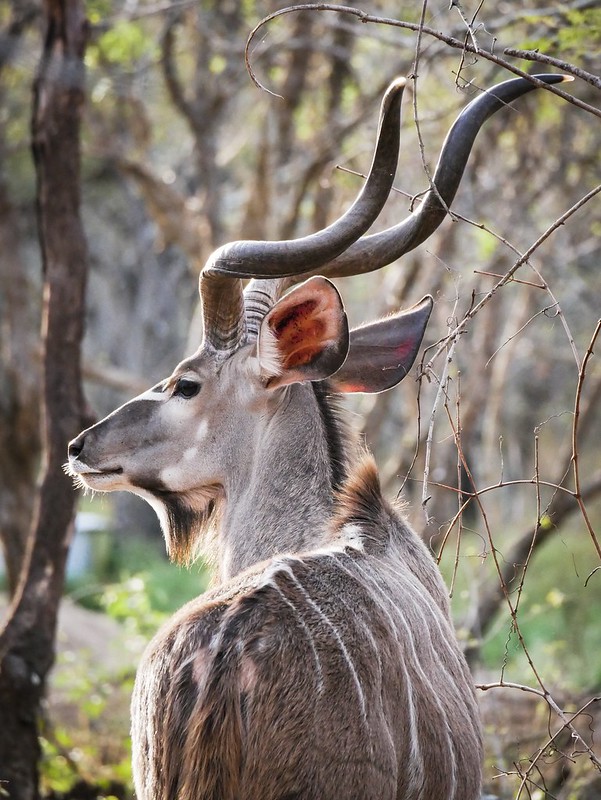 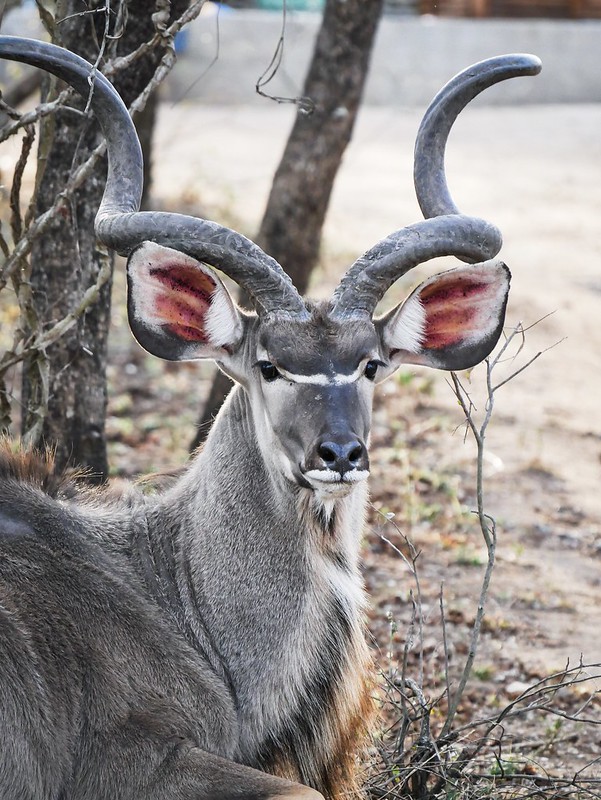