Dilijan National Park was never high on my list of destinations to visit in Armenia as it’s heavily forested and I love an open view with jagged peaks. However we didn’t go to the far south of Armenia so instead we figured we best explore Dilijan and spend a few days in nature. We picked a cute guesthouse that had a large garden to relax in and all of the furniture was handmade by the husband. We were shown the room we booked but our host said she had a better one to show us for a little more. We asked how much more and she said “just a little, come see”. We were reluctant, the rooms in Dilijan are already expensive compared to the rest of Armenia but she insisted we follow her up 3 flights of steps, with our heavy backpacks!!! As soon as we got to the room we asked again how much more…€5 extra PER NIGHT! Which for us is a lot so we said no and had to carry our bags all the way back down. I think they felt bad so half way down the steps we were told to put our bags down and go into a little stone building to try some homemade Armenian wine. It was a very rustic tasting session, no wine glasses here, just a plastic cup that was re-used for the red and rose. The latter we really enjoyed actually but our host said the wine in Armenia isn’t great but the cognac is the second best in the world (after France) so he gave us a taster of that too. By the time we reached our original room we were feeling rather tipsy! 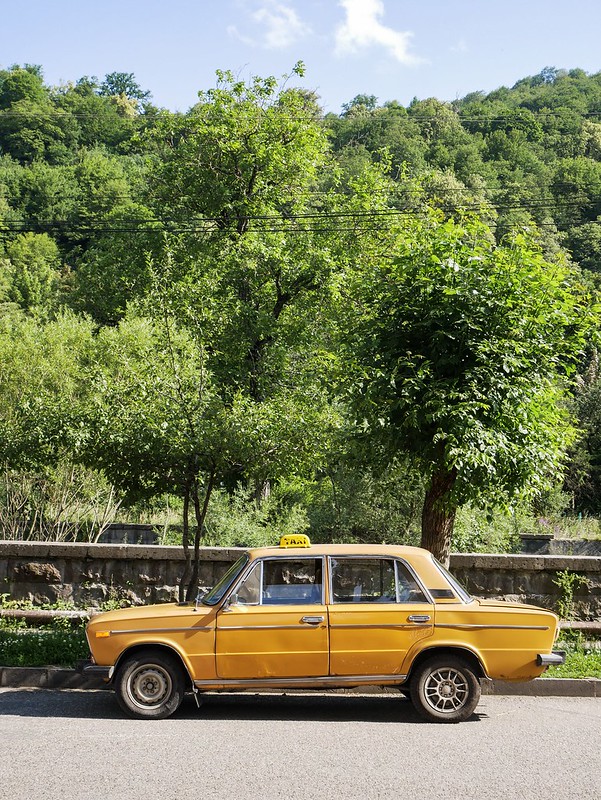 We took a stroll into the little town of Dilijan, past many adorable stray dogs including 8 puppies who were all the same size except for one fluffy giant who’d stolen all the milk. We ate lunch at a little eatery selling a local sort of Armenian pizza on a flatbread with meat for Craig and cheese for me. A very nice Russian guy helped us translate the veggie one for me and then we paid up and waited. Just before the food arrived we grabbed a coke from the fridge and went up to pay but the lady tried to charge us again for the pizzas and didn’t remember that we’d already paid. She was being quite rude and we actually had to awkwardly ask the Russian guy for help again because he saw us pay so he told her she was mistaken and she eventually took his word for it, begrudgingly…well we won’t be eating there again! Luckily that was the only rude person we met in Armenia, everyone else has been delightful! 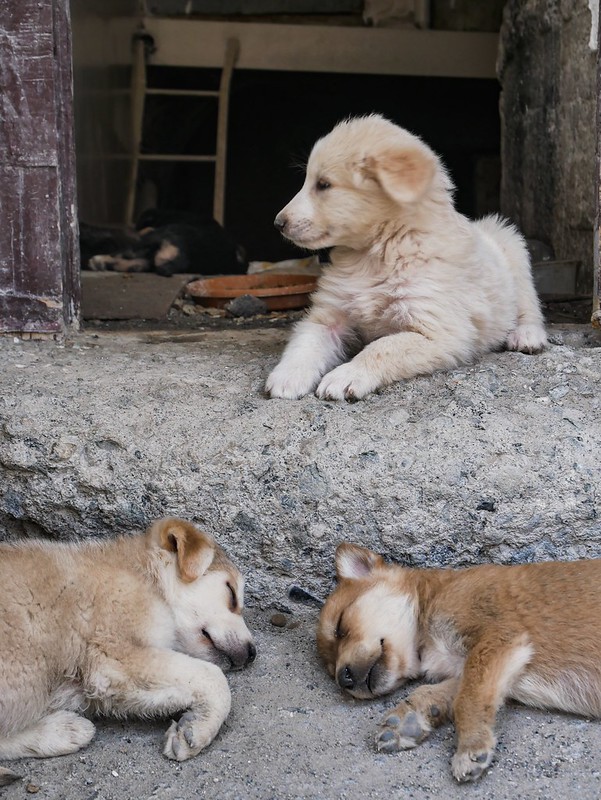 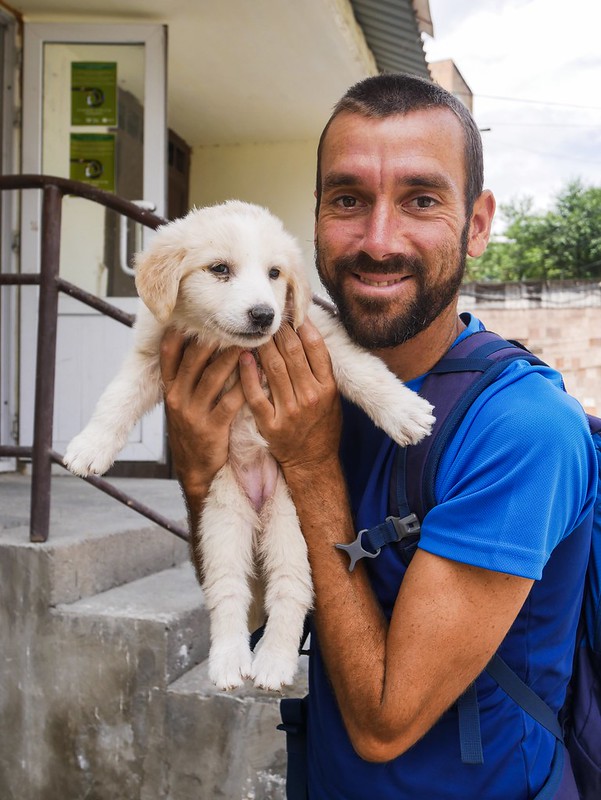 The next day we decided to head on a hike from the village of Hovk which was about 25km from Dilijan. We didn’t want to pay for a taxi, we’d much rather get a Marshrutka van or hitchhike a ride with someone heading that direction. So we walked out of town a bit and a guy soon pulled over. He didn’t speak English but seemed to be suggesting he was turning left soon but I suddenly noticed a crutch by his arm going down to the footwell and then I saw he didn’t have any legs. His trousers just ended a little past his waist and then I realised the crutch was his ‘leg’ for driving, he put his arm in it and pressed it down on the accelerator or brake. I’ll give the chap 10/10 for initiative but in a split second I had to decide if it was a good idea to get in his car and I thought maybe it’s not a safe option so we politely smiled and said we needed to go straight (which was actually true) and he sped off with his crutch to the peddle, bless him for stopping though, what a sweet guy.

Finally a car pulled up, it was a shared taxi so the price was very reasonable at just €2.50 for the journey. However he didn’t take us up to the village, instead he dropped us at the bottom of the road where we had 4km until the start of our hike. It also happened to be the quietest road imaginable. Not a single car passed for over 20 minutes but finally one came rumbling up the dirt road and stopped for us. We soon realised the guy was drunk, with a bottle of booze between his legs and blood shot eyes, at 10am. He was a very jolly chappy though, pumped up the music and threw his hand in the air, waiting for the beat to drop. He was driving really slowly to be fair as the road was in such bad condition so we felt pretty safe and he only took us 2km before we reached his house. We then made our way up to the simple village of Hovk where locals galloped past us on horseback. 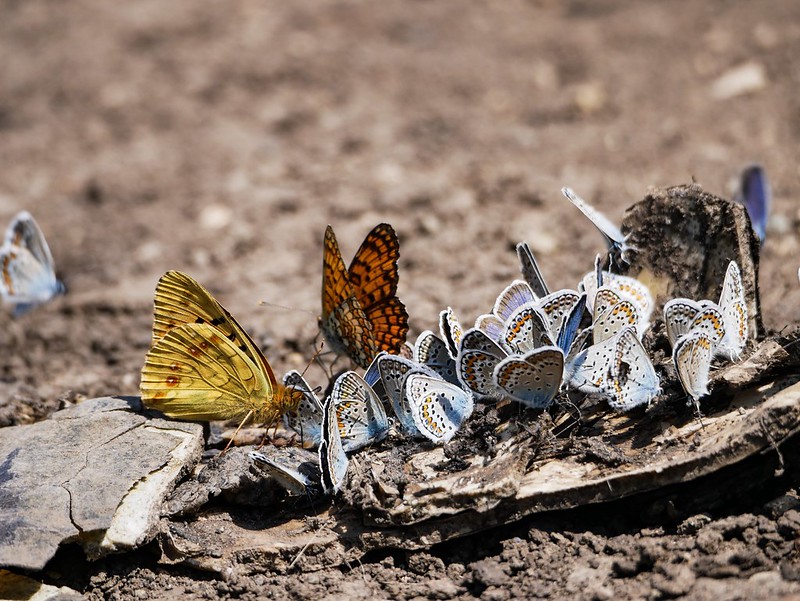 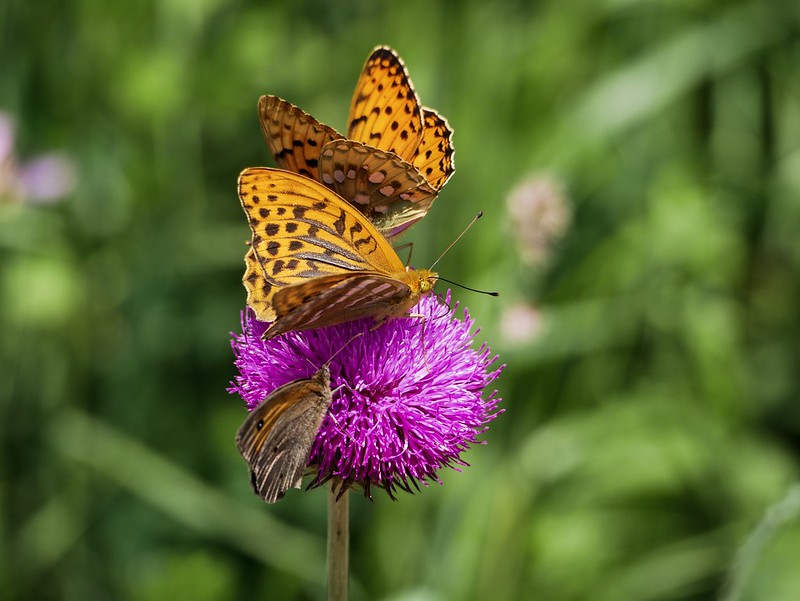 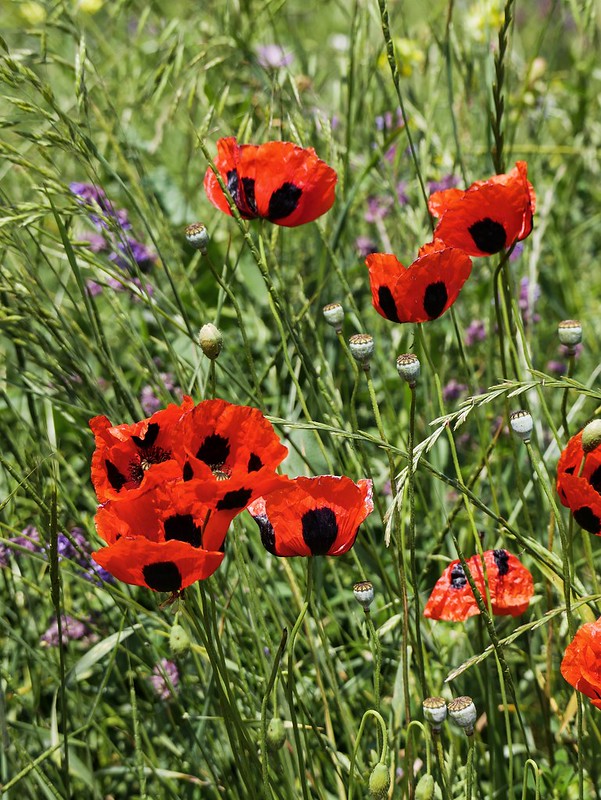 Towards the top of the village we spotted a gorgeous border collie who looked so scared of us. We crouched down and put our hand out to try and encourage him over and he eventually started moving our way but in a very submissive manner with his butt scooting along the floor until he rolled over with his belly in the air for us to stroke. He was such a lovely dog and followed us from then on. 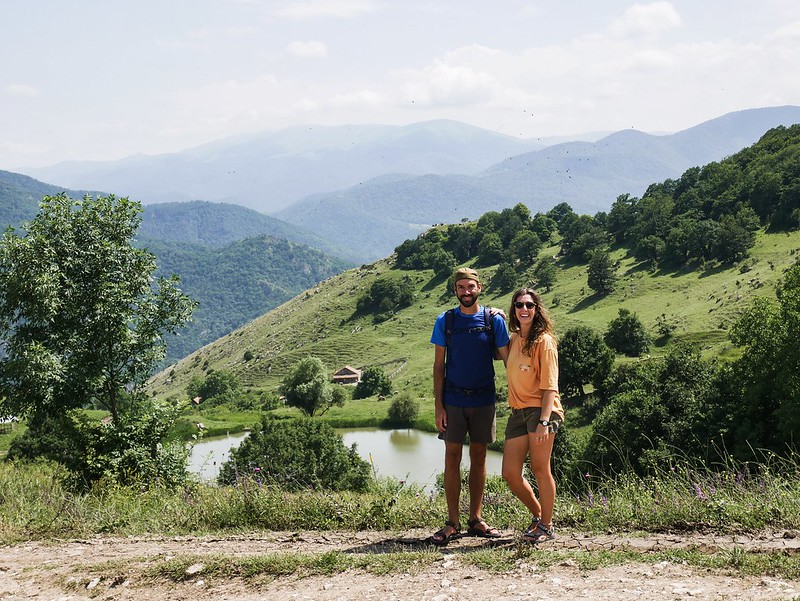 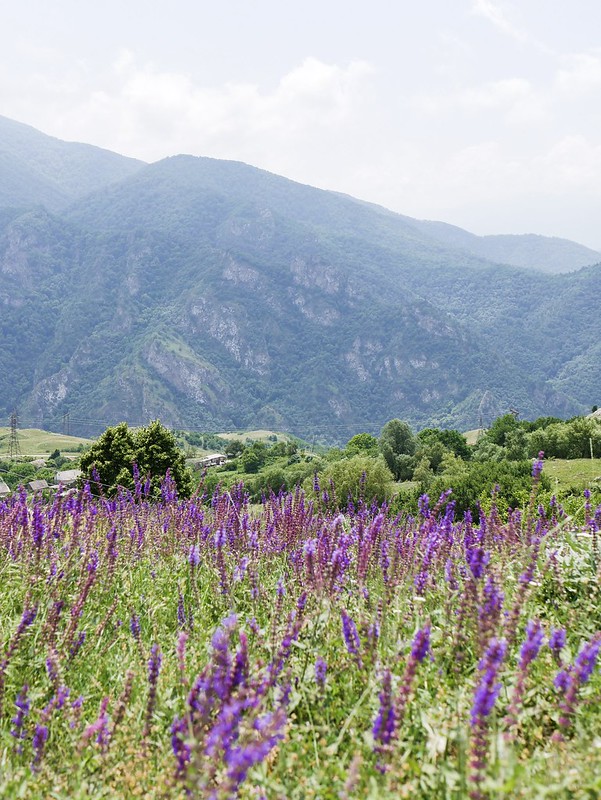 It was starting to get pretty hot and we still hadn’t reached our trailhead after well over an hour of walking uphill. But finally we arrived at a little pond and a dirt track that led us further into the national park. We noticed an old soviet jeep was coming up the track so we stopped to watch them navigate their way through an almighty muddy section. They were sliding around quite a bit but once they got through they stopped and a guy got out and waved us over. We were confused but they seemed to be offering us a ride so we ran over and hopped in. I say hopped in, it was a little more challenging than that as the car ran on gas and a huge tank covered the floor in the back so Craig had to sit with legs right up by his chest which looked hilarious. We felt pretty bad because our sweet dog wanted to come in the car too but we had to leave him behind.

There were three men in the car and they were all forestry workers, heading up the mountains to work at a nursery. The man in the passenger seat spoke English so he was saying he could take us all the way up to the nursery. We had no idea how far it was but we were happy to get a ride up the mountain and save our legs the walk. The road was absolutely crazy though, with an unbelievably steep gradient, giant potholes, rocks and crevasses in the mud. We were getting thrown around like rag-dolls in the back. We stopped at a huge muddy puddle as it was the location of a spring so they popped the hood open and collected some water to cool down the car. The soviet jeep we were in was over 40 years old and every time we’ve been in one of these vehicles they’ve had to stop to add water, but boy are they built for these rough roads. The views started to really open up as we left the forest behind and now we had rocky cliffs ahead of us and meadows all around. We got to a point where the passenger said “I think here is a good place for you” and he was right, it had the most fabulous view and we could slowly walk back down the road to the village while enjoying the scenery. We’d climbed about 550m elevation which would of been pretty tough in this heat so we were very grateful for the ride…especially as this area wasn’t part of our plan, we originally wanted to hike up a summit which turned out to just be a forested hill.

The lovely passenger came out and shook our hands, we exchanged names and thanked him very much for the ride. Before he left he said “be careful…there are wild animals around!” Which excited us as he was most likely talking about bears. They drove off and we took a moment to just gawp at the view. It looked like a fairytale, we were surrounded by some of the best and most abundant wild flowers we’ve ever seen. It wasn’t just the flowers though, we had these dramatic rocky cliffs ahead of us which is something we hadn’t expected to find in such a forested park. After enjoying the view we plodded back down the dirt road towards Hovk, past even more beautiful wildflowers. 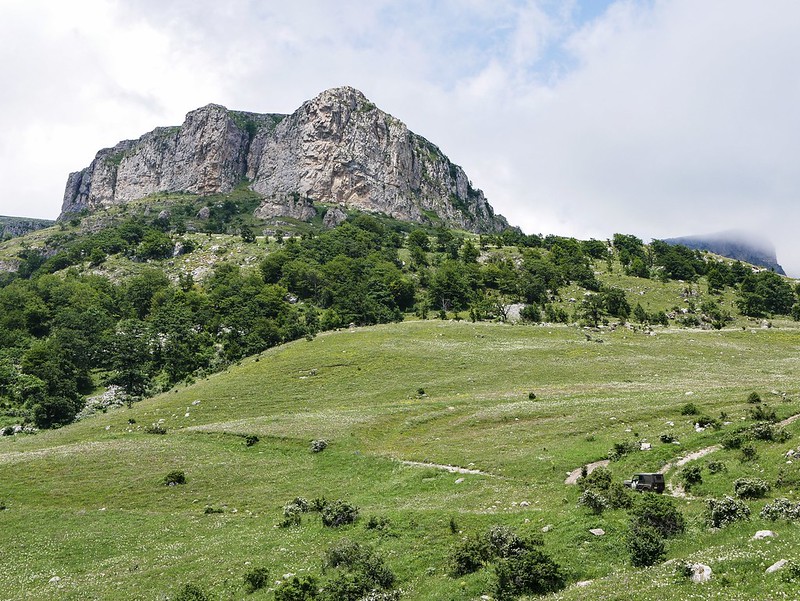 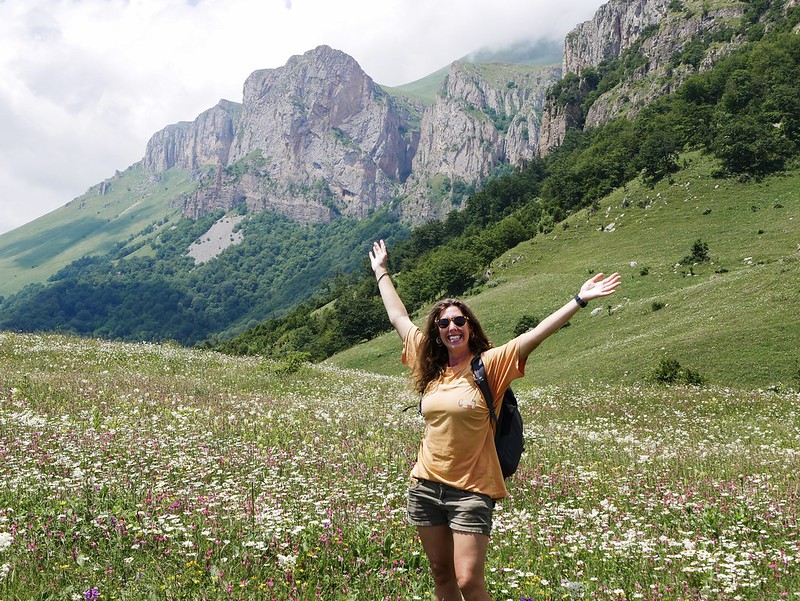 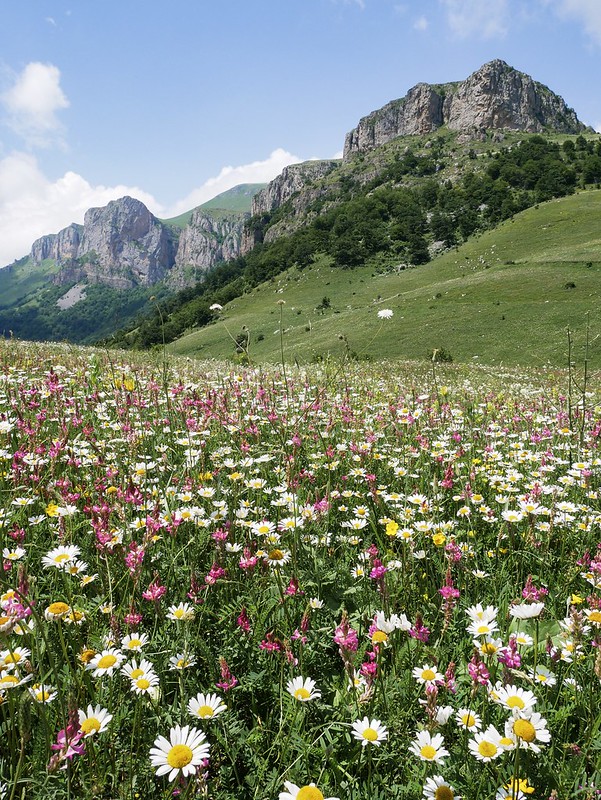 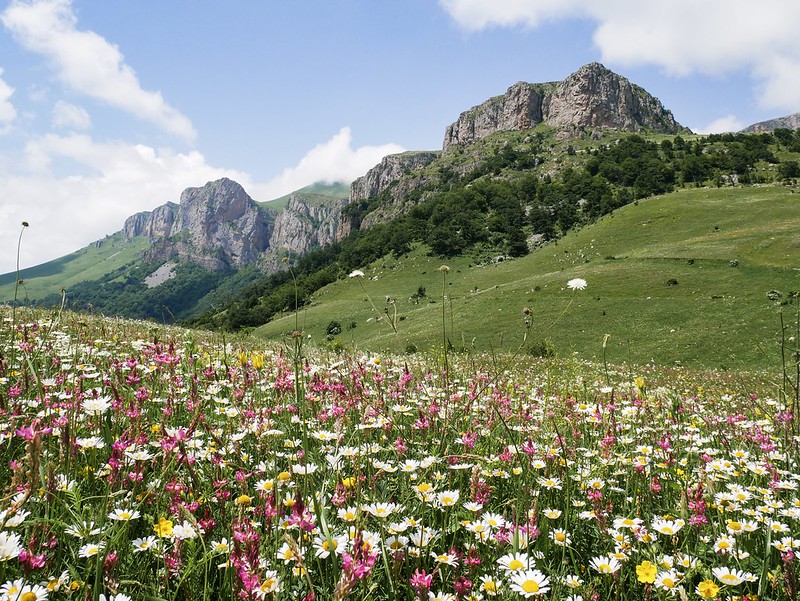 The border collie was waiting at the same place we met him and he instantly recognised us and came running over. He collapsed sideways for cuddles and was whining with excitement! He decided to follow us again, but this time we were walking 4km down a dirt track to the main road and we thought it would be a bad idea for him to come along but he wouldn’t take no for an answer. Halfway down the empty road we met a lone man walking up. He had long hair which is very rare in Armenia and looked like he’d been drinking. As soon as he saw the dog he grabbed stones to throw at the poor thing so we had to quickly show the man how friendly the dog was. Eventually he tried to befriend the dog and take him back up to the village but the dog wasn’t having it, he clearly didn’t trust the man who then asked for my camera to take a picture. It might’ve been totally innocent but we didn’t get a good vibe from him and the way our dog was reacting confirmed that. So we said goodbye and once the man was out of sight we gave our dog a big cuddle because we’d just had to be mean and try shooing him towards the scary man. After a week in Armenia the weathers finally perked up in Georgia for us to head back and do some hiking. 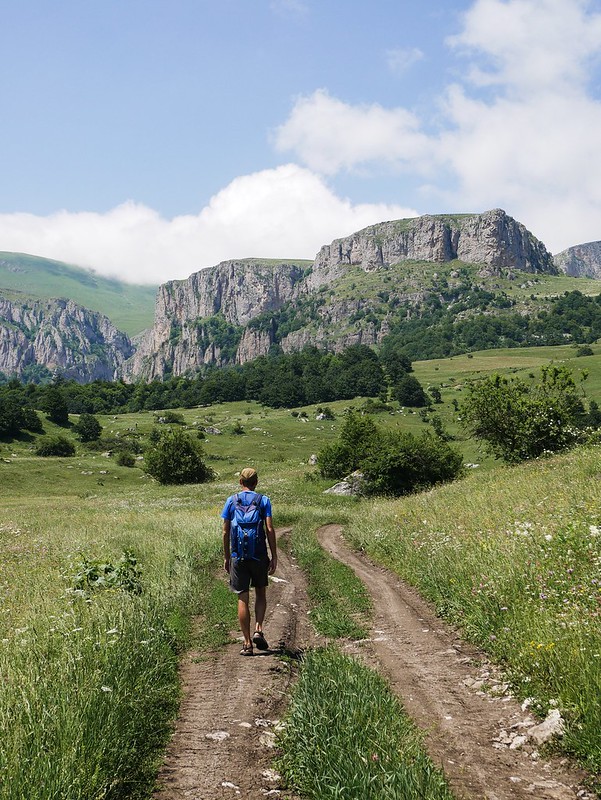 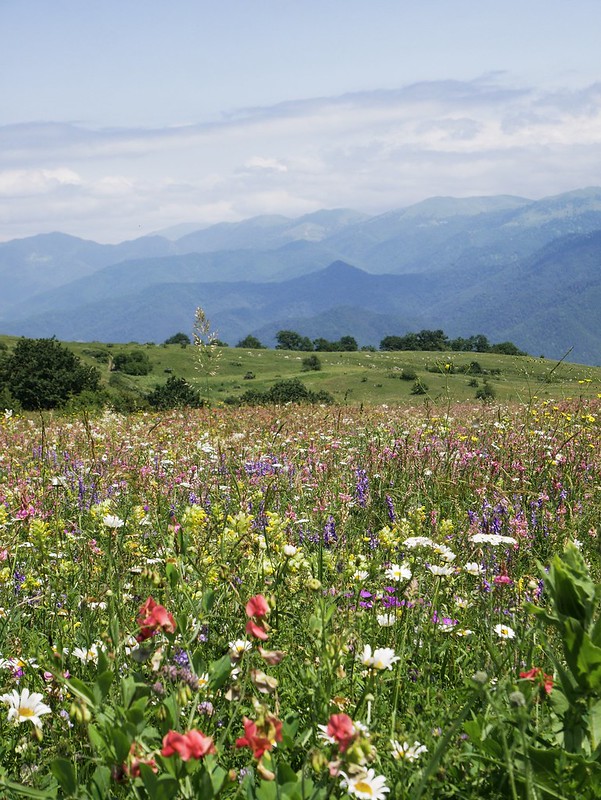 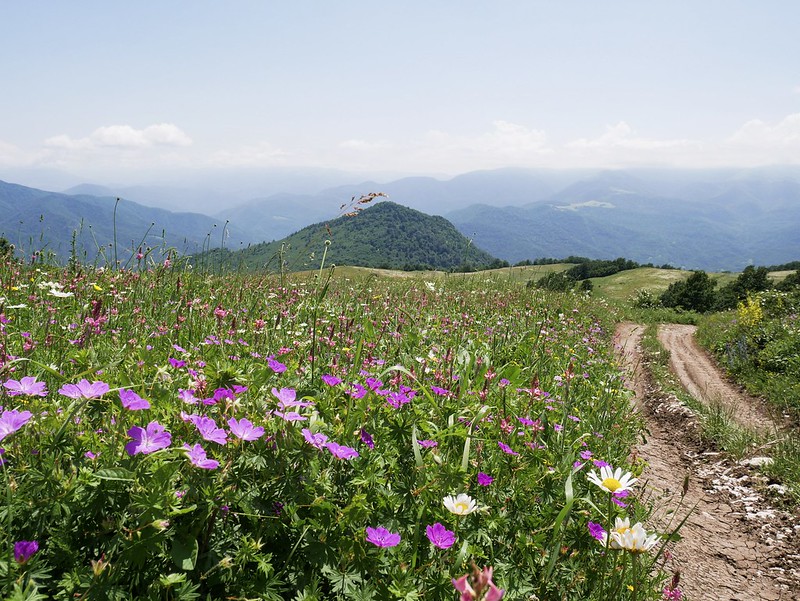