We felt a little sad to leave Kosovo after meeting so many kind locals and we couldn’t of had more of a shock as we crossed the border into North Macedonia. To start with we had a rather rude welcome to the hostel in Skopje as I was midway through asking a question when the owners phone rang and he put his hand up to silence me. Then we headed to the bus station as we had an action/packed day ahead and we wanted to reach the Matka Canyon. The bus station was so confusing and we couldn’t figure out where to catch the bus from. Everyone we asked had such a bad attitude but eventually we found the bus and a little cabin where they sell tickets. The lady inside looked like she was in an 80s time warp with dyed red, wavy hair and a cigarette smouldering away. She was on the phone and clearly we were a complete inconvenience to her. Eventually she stopped her conversation, pulled out a piece of gum from her mouth and popped it on the table. Then she printed our tickets and passed them to us with the same hand she’d just grabbed the gum with. We got such a horrible feeling from the country and we’d only just arrived. 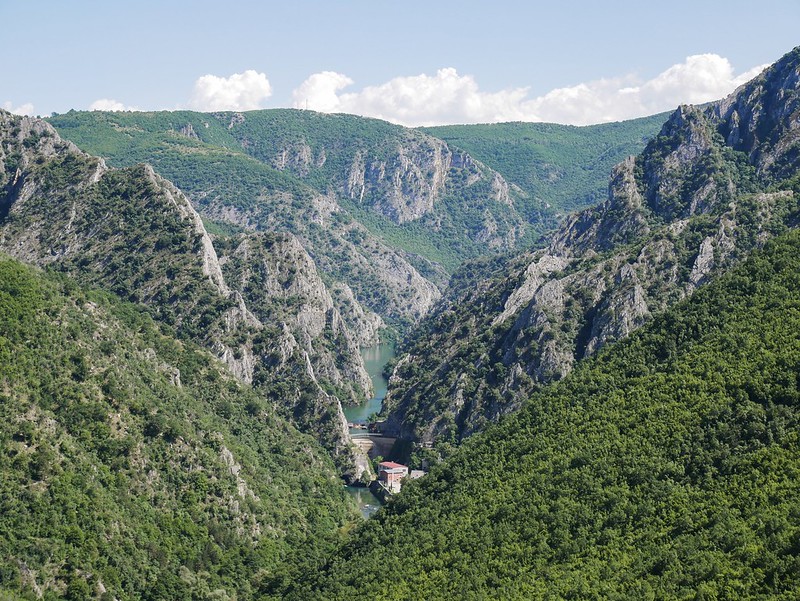 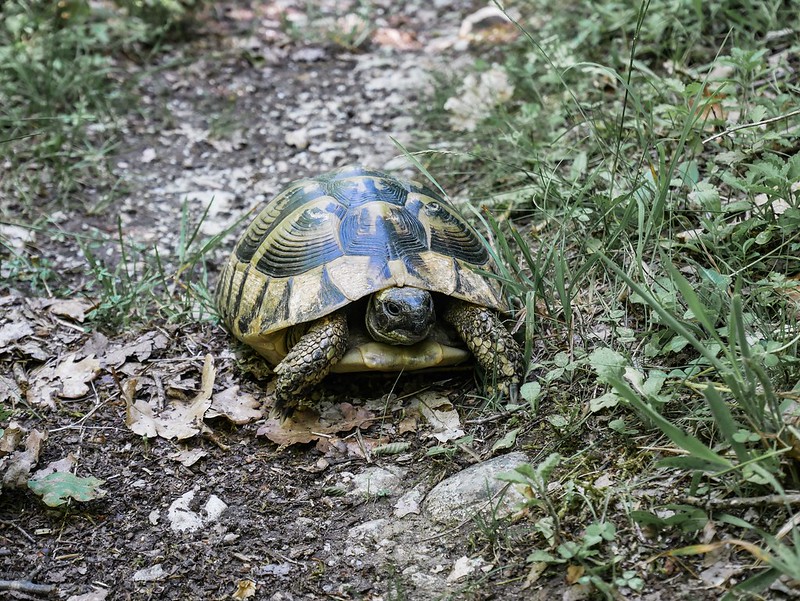 Anyway, the bus took us out the city to this beautiful canyon which was free to visit, hooray. We decided to get a high-vantage view to begin with so we made our way up a steep gravel track. A suspicious looking man was walking down towards us and he barely said hello back to us. Then we came across a fresh human shit. You can take a guess who left it there!! What a fucking animal, doing it in the middle of a dirt track, he could of gone in a bush where no one would walk. The dirt track turned into a narrow, overgrown path where tortoises rustled through the dry leaves and huge spiders waited in webs at eye level, ready to ambush us. The view from the top was nice but maybe not worth the effort so we headed all the way back down to the river which had a huge rocky wall rising straight out the water. It looked like a very appealing spot for a swim but we were limited on time for our bus back so we continued our explorations of the canyon. A path led us along the river until a big dam created a lovely lake surrounded by sheer walls. This is where colourful taxi boats ferried people across the lake and locals played around on pedalo’s. It was quite a beautiful canyon actually, especially considering how close it was to the capitol. 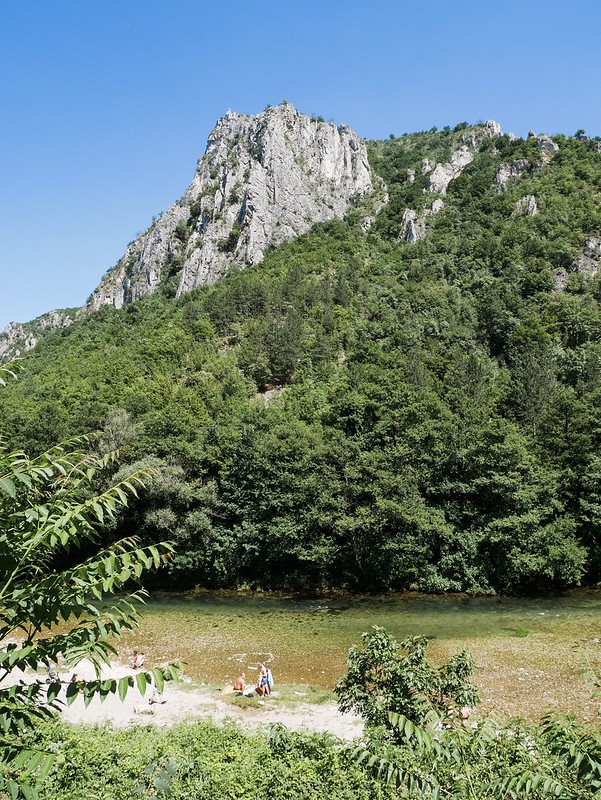 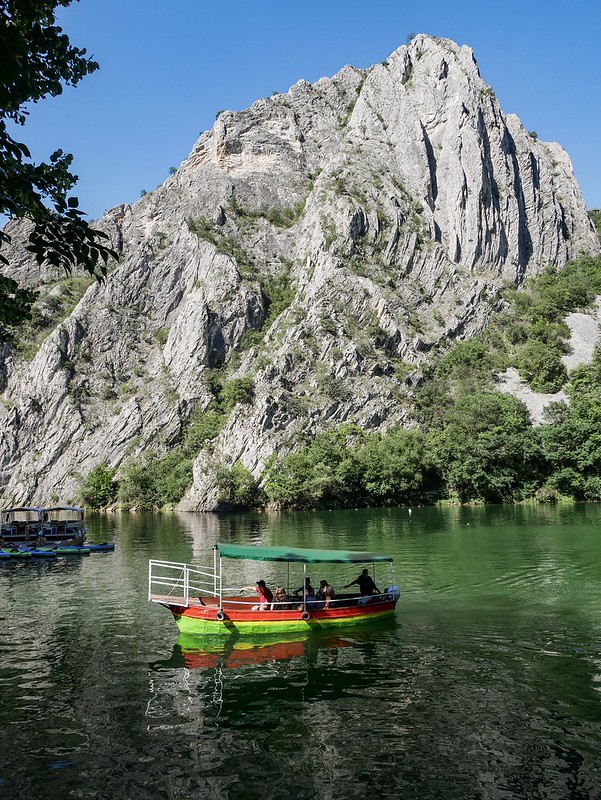 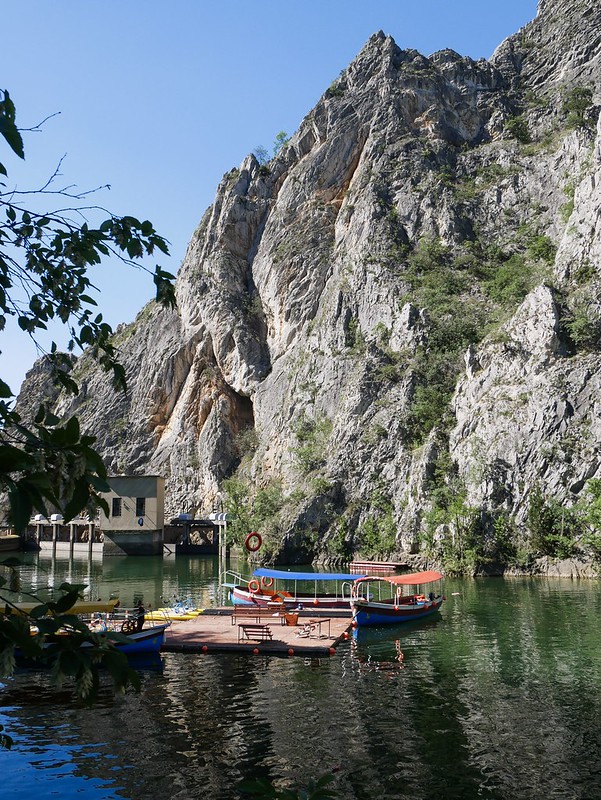 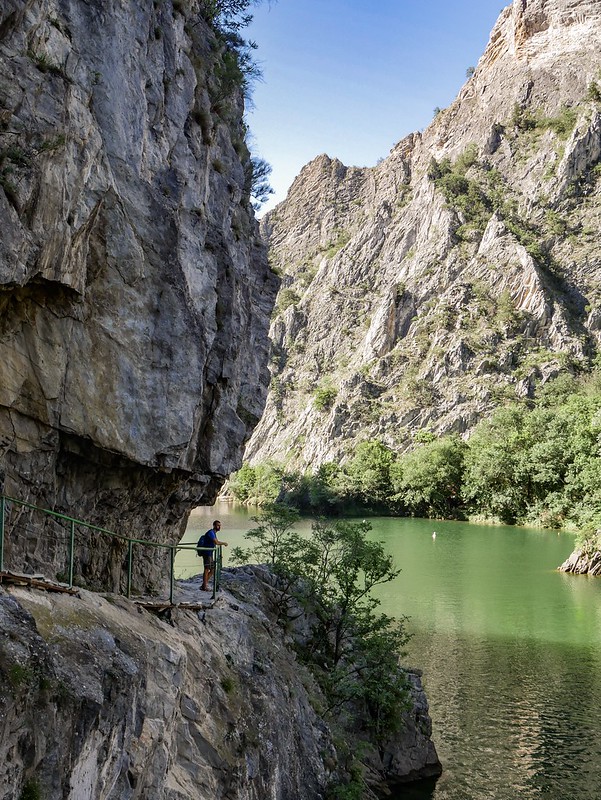 We had some spare time to go back to the crystal clear river for an icy dip in the water before catching the bus back to Skopje. There wasn’t any rest for us as we decided to explore the city which was extremely modern. I was quite excited about strolling around the bazaar but almost every shop had already closed up for the day. So it was a rather boring stroll to be honest and the highlight was getting a dominos pizza and eating it on a street corner. It was so filling that we both had a few slices left so we put them in our hostel fridge for a quick breakfast tomorrow. However when we woke up we discovered some absolute prick of a human had eaten half the pizza. I was so pissed off, North Macedonia hasn’t had the best start with the grumpy locals and now this! 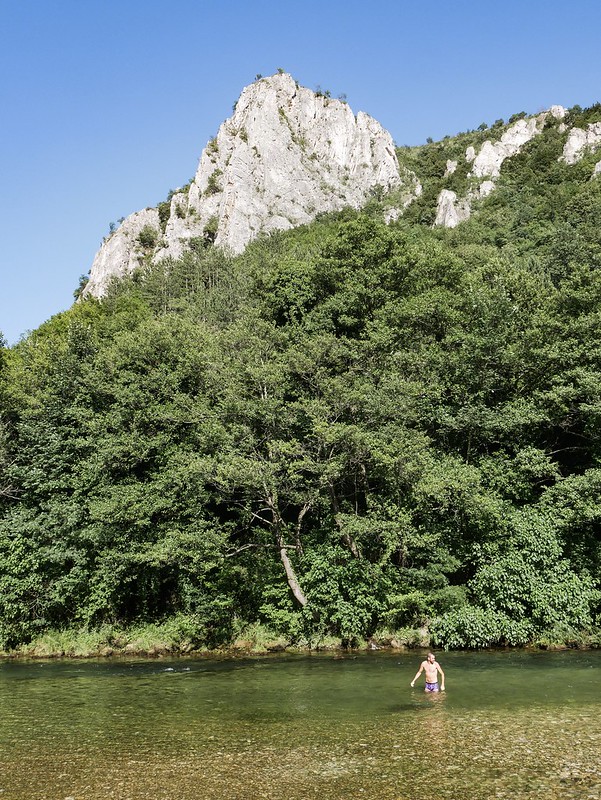 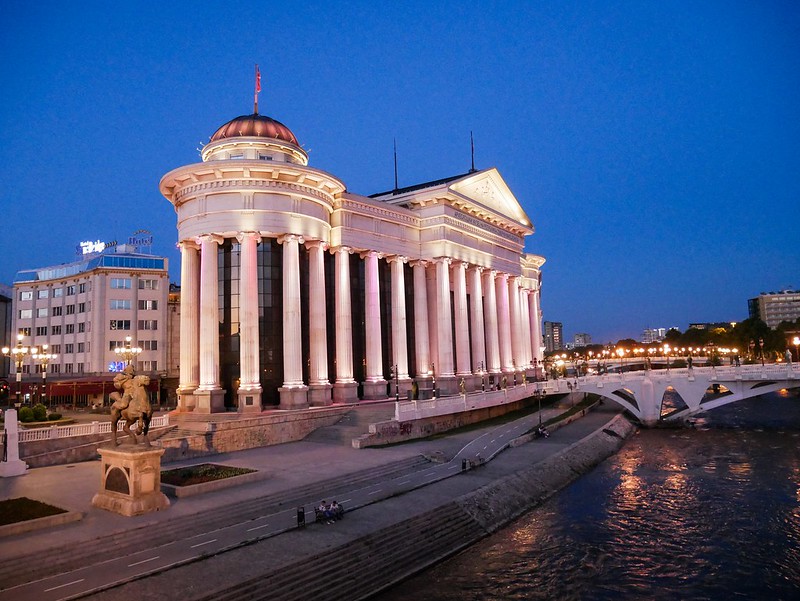 Anyway, feeling very hungry we had our luck change slightly as we arrived at the bus station and spotted a bus heading for Ohrid. It had already left the bus station and was on the main road but thankfully the driver let us on or we’d of had an hour wait. Our luck turned again when we arrived in Ohrid and our guesthouse host put us in a different apartment to what we booked. The bed was awful, it was so sunken in the middle it looked like the ghost of an overweight dead person was laying in it. We had to call the owner and complain so he said we could move into the correct one in a few hours. What a bloomin’ faff. So we headed out for a stroll through the old town and down to the shores of Lake Ohrid. The lake is one of the oldest in the world and it has a depth of 288m. It also has a unique ecosystem of worldwide importance with over 200 endemic species living in the water. 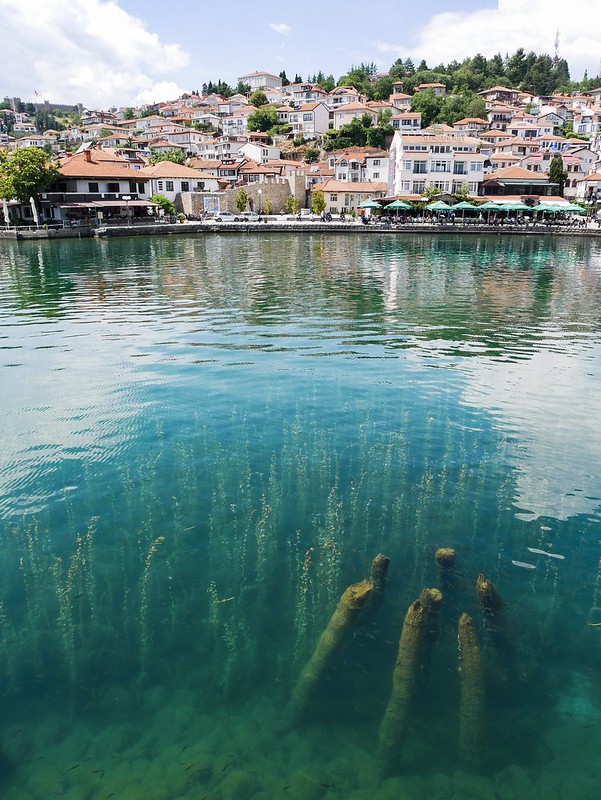 We stopped in a farmers market and bought a melon and cherries for a very healthy lunch which we enjoyed on a jetty by the lake. The water was so clear we could see giant weeds and plants swaying beneath the surface. We even saw a snake effortlessly swimming across the water towards us. We followed a wooden path around the edge of the lake and past some cute little beaches until we finally got a view of St. John Kaneo church, said to be the most photographed sight in North Macedonia and we finished up with a swim at a pebbly beach. Just as we jumped in a storm cloud began brewing and we had a pretty cool view of lightning shooting down towards the lake. We had to run back to avoid the heavy downpour and managed to finally check into our apartment, hooray! 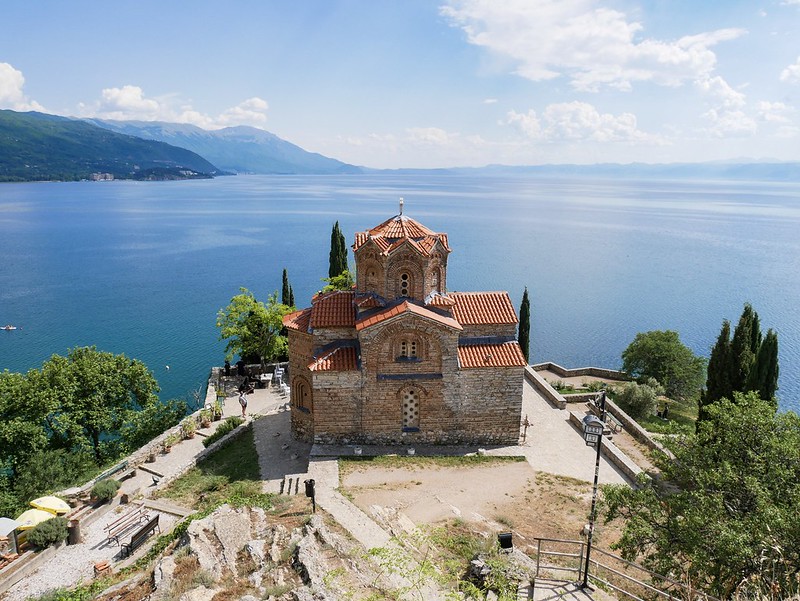 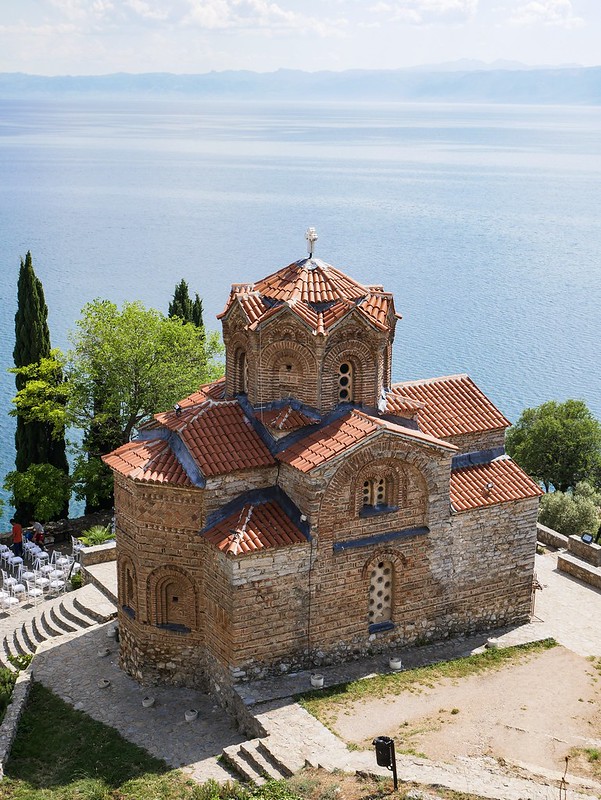 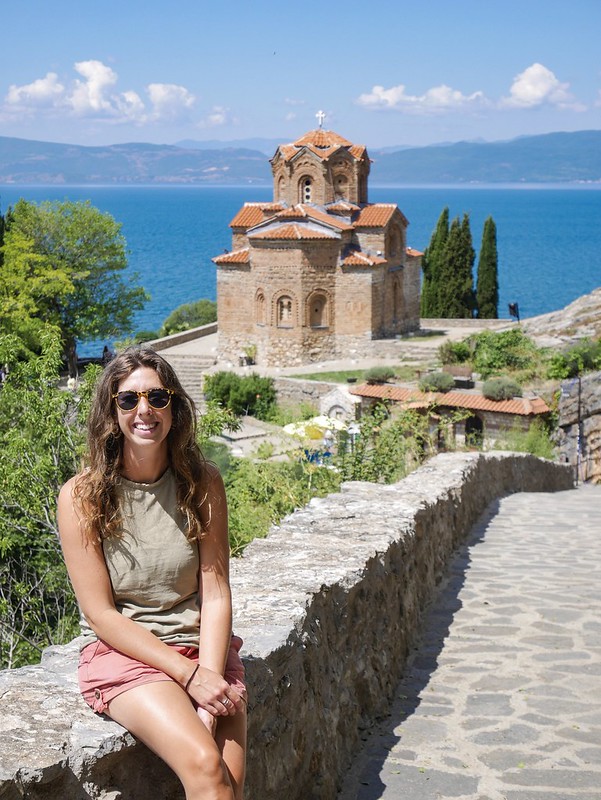 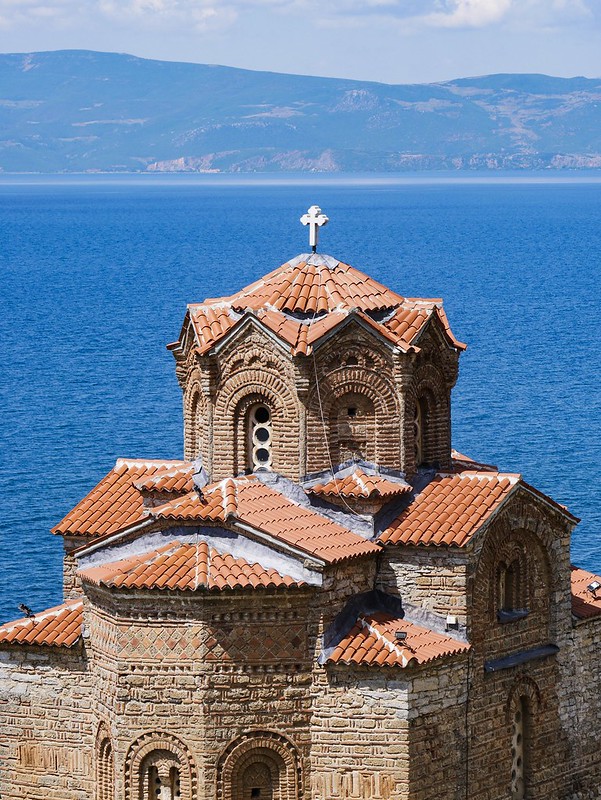 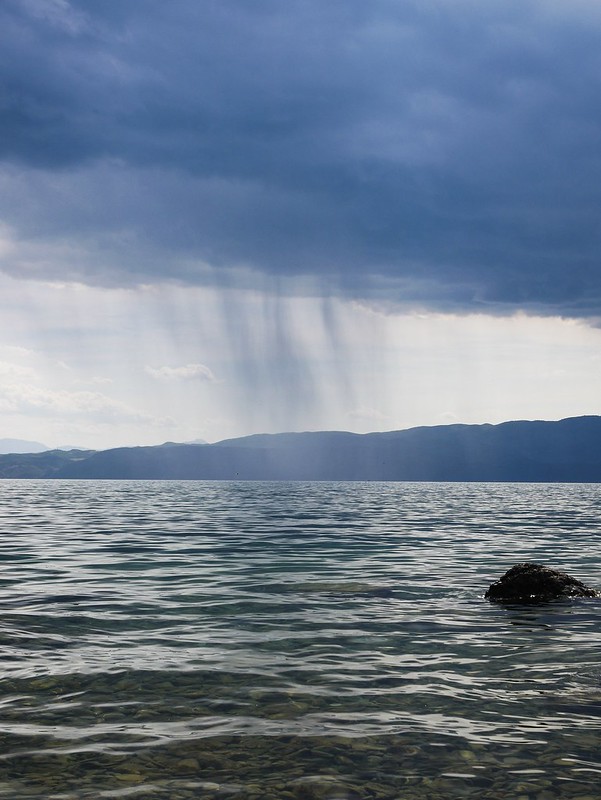 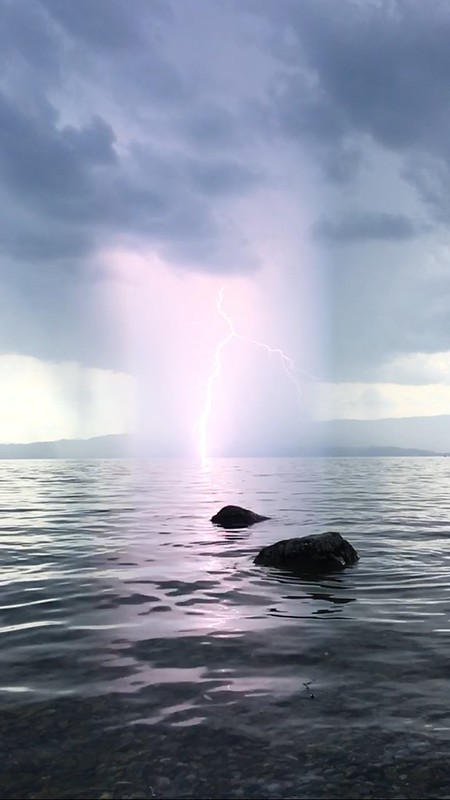 The following day we headed south towards the Albanian border. We ended up taking a shared taxi which pulled up as we were waiting for a bus and offered us a ride for just €2.50. It was quite a long drive but we eventually arrived at The Monastery of Sveti Naum where there were manicured gardens, a dusty looking beach and perfect turquoise water fading into a deep blue. But most people come here to see the monastery so we headed there straight away to get ahead of two big boatloads of tourists. It was way busier than we expected so we just took a couple of photos and headed on a tranquil stroll through the woods and past a large fresh water spring. We enjoyed a relaxing picnic on the shores of the lake before getting a ride back to Ohrid. 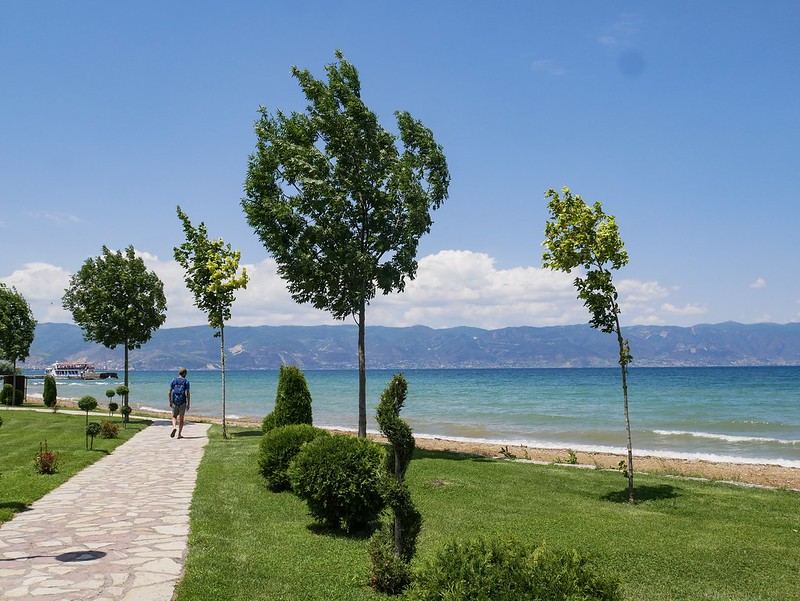 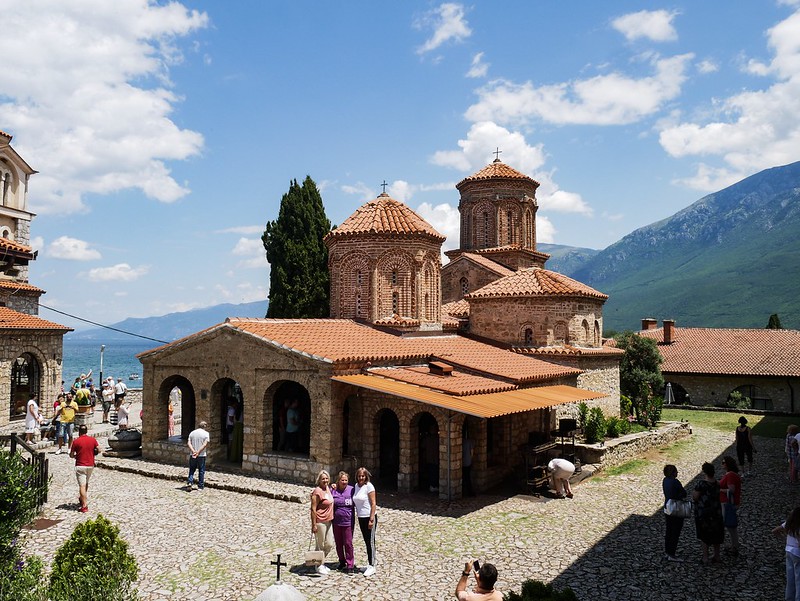 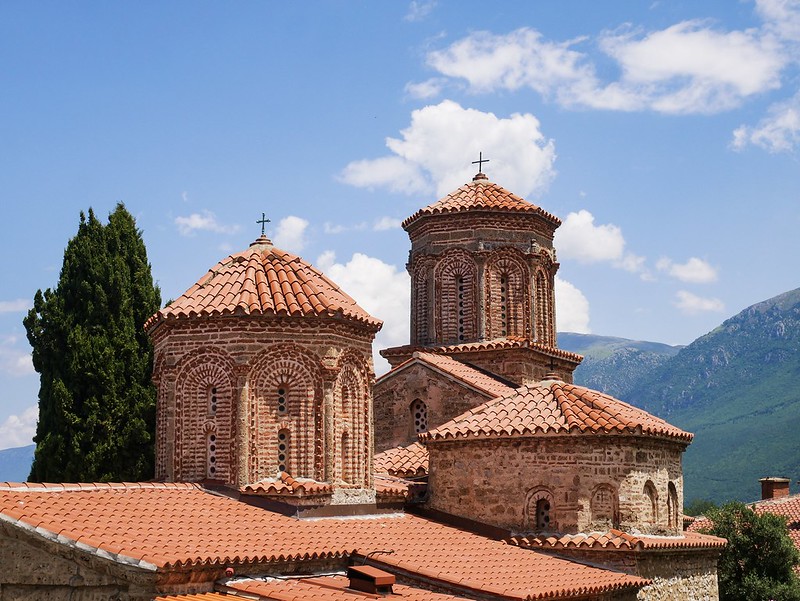 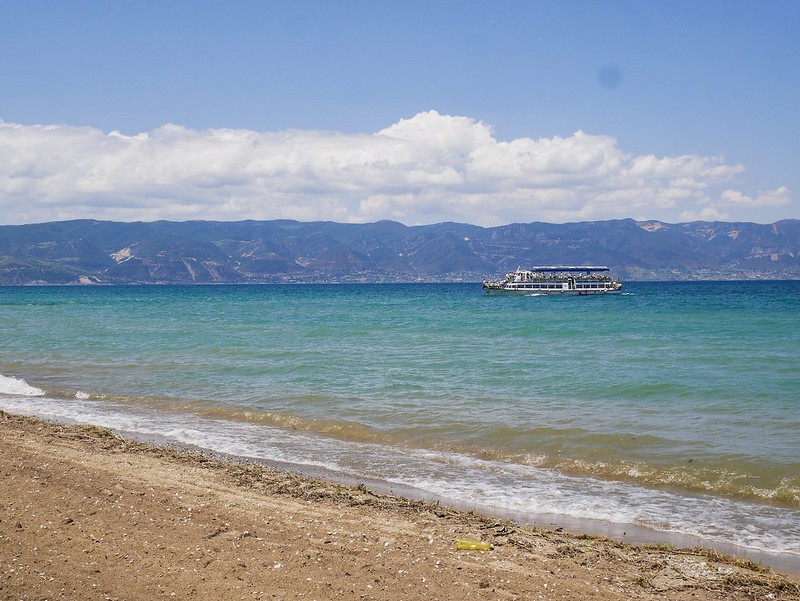 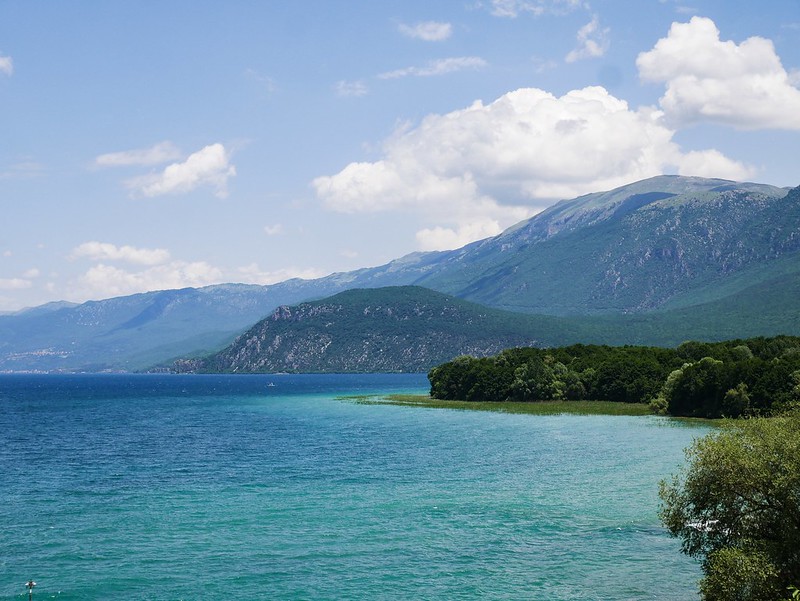 We were feeling a little exhausted but it was our last evening in Ohrid so we headed back out for a walk to see the sunset at the church which was lovely. Now it’s time for us to head south to Bitola, a little town which sits close to the border with Greece as we are heading to Thessaloniki for our flight to the Caucuses. 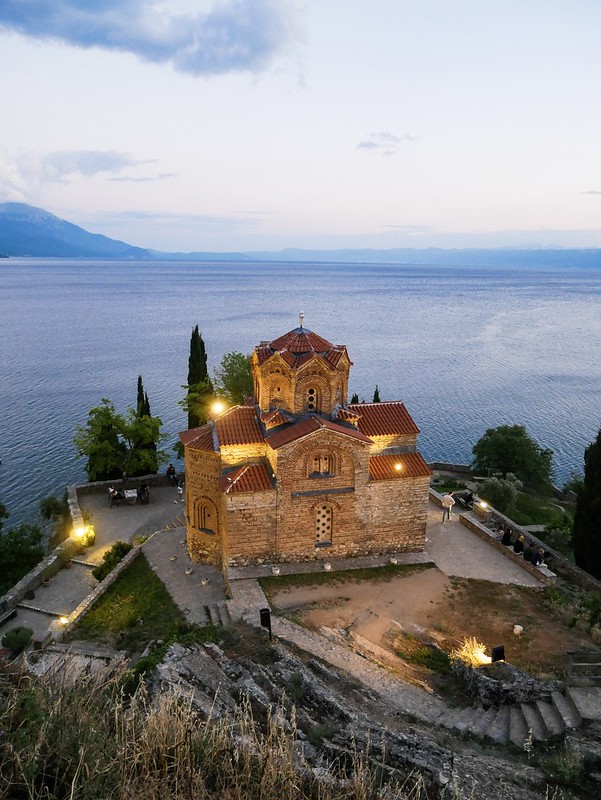 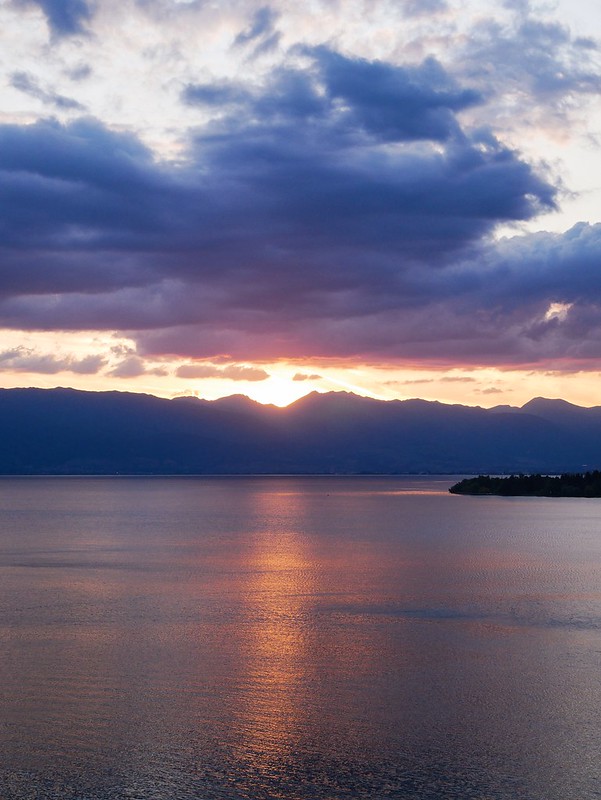 To make it to Thessaloniki in good time we had to wake up at 4:45am and first catch a taxi to the town of Florina. We were quoted €35 for a taxi but we chatted to the driver on the journey and he said “you are in luck…I am not a taxi driver but I’m actually the owner of the apartment you stayed in, so instead of €35 you can just pay me €25”. How sweet! It’s a shame we started off on the wrong foot in North Macedonia because there are some really kind people here.

Things almost went tits up at the border though, we knew we had two days spare of our 90 days in the Schengen region but our exit stamp from France didn’t show the date properly. So the border guard was trying to find out how many days we had left and gave us a heavy warning that we’ll be fined if we overstayed. Luckily we had it all planned out so we would be leaving on the 90th day.

We then hopped on a bus to Thessaloniki and headed straight out to get a gyro which is basically a kebab in a pita, I ordered the vegetarian one and the man asked if I wanted ‘everything’ to which I said yes as I didn’t want to miss out on any salad or goodies. I particularly didn’t want to miss out on tzatziki as that’s the best part but alas, my meal arrived and it was just a sorry looking pita holding a bunch of chips with a squirt of ketchup and mustard on them. Yuck. No salad and absolutely no tzatziki in sight. It was drier than the Sahara and I felt rather upset about my first meal back in Greece. But alas, no time to dwell, we had to find a shop that sold Teva sandals to replace my broken ones. Seeing as our wallets were feeling a little empty after that purchase we thought why stop there? So we headed to the waterfront for a frappe coffee. Holy moly it was sooo expensive. We’ve gotten used to delicious, cheap coffees in Albania and Kosovo and now we’re paying €4.50 for an iced coffee! It was a nice coffee and a great view to be fair but the waitress was unbelievably grumpy and seemed to make an effort to barge into my chair every time she walked past. We finished our day with a lovely Greek meal in a cute taverna where I ordered a whole damn plate of tzatziki and instead of a Greek salad as those ingredients have been quite common in the Balkans we opted for an usual walnut, carrot and strawberry vinaigrette salad. Now it’s time to get some sleep before our flight to Georgia!