Ireland’s one of those countries full of folklore stories and mythology, and fairies play a big part. We visited a Magic Road a few weeks back in county Sligo but now it was time for us to try out what’s considered to be the best Magic Road in Ireland. It’s situated on the country lane that leads to the popular Mahon Falls in County Waterford. If you didn’t see my post about Magic Roads then it’s basically where you put your car into neutral at the base of a hill, take your handbrake off and you supposedly get pushed uphill by fairies! Craig believes it’s an optical illusion so we’re here today to prove him wrong.

The road had a spray painted line across it saying MAGIC, and that’s where we put Helga. As soon as we released the handbrake we were rolling back uphill!! Wahooooo. We turned around and tested the road in the other direction too and it really did work, not only were we moving up the hill but we were doing so at GREAT speed! The road flattened out but we continued rolling in neutral for about a kilometre until we reached the junction. So Craig is officially a believer that fairies did indeed push us up the hill. 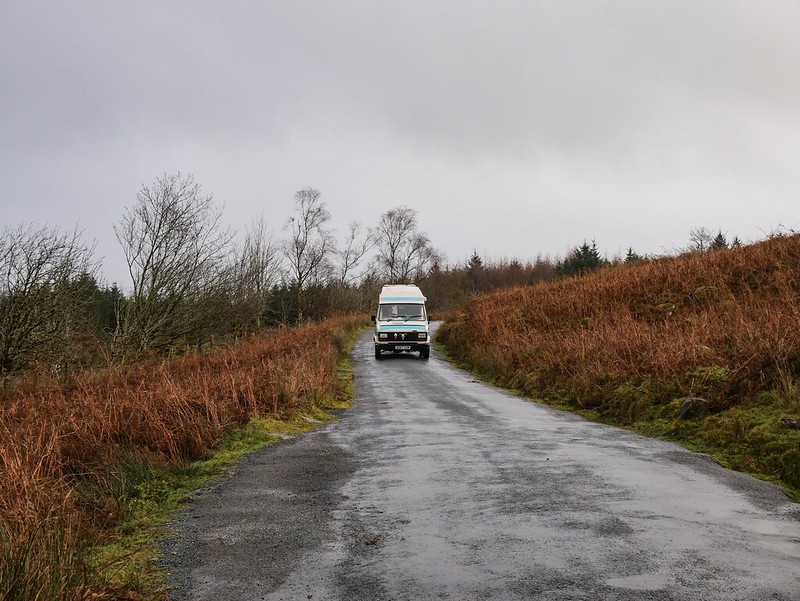 We wanted to do a hike that encircled the mountains around Coumshingaun Lough so we set off nice and early. It was supposed to be good weather but as we climbed up we could see we were just heading towards a thick layer of cloud. Light rain showers kept passing through but the sun was shining so a rainbow appeared in the basin surrounded by the peaks. 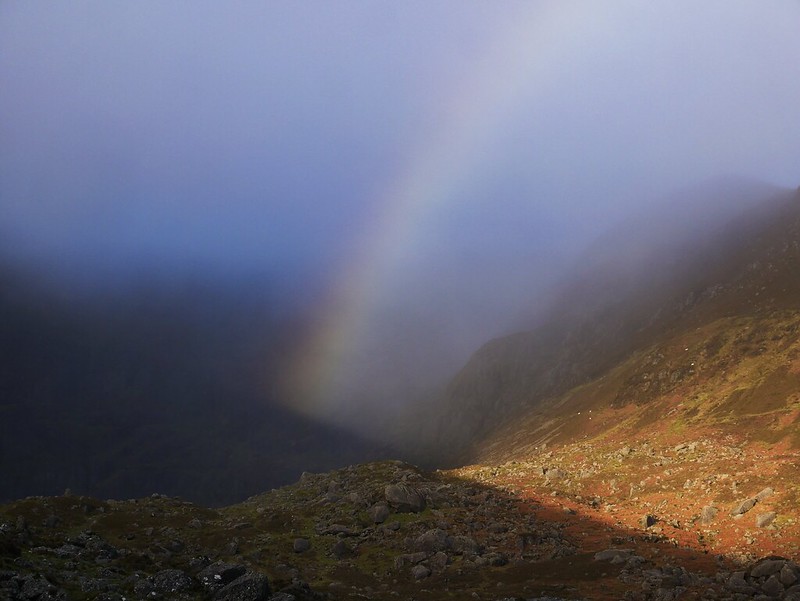 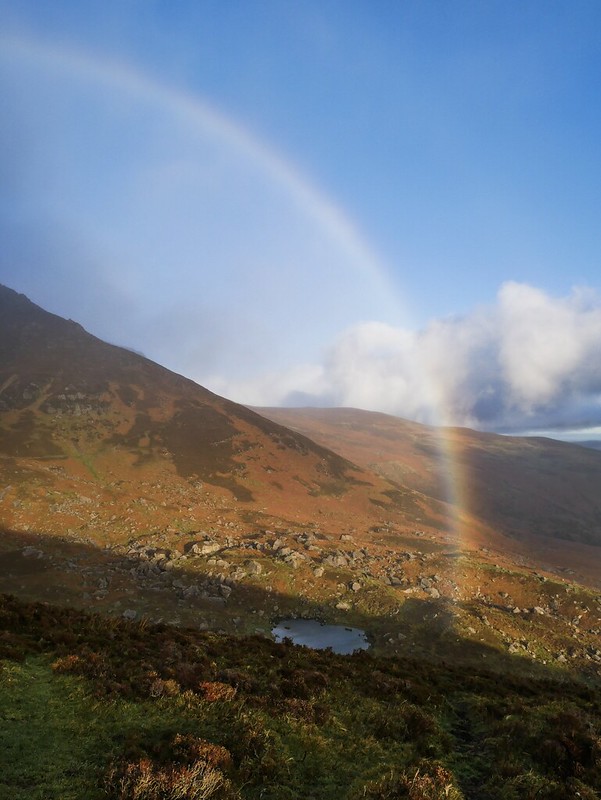 We waited about half an hour in the drizzly rain before we decided to give up, there wasn’t any point hiking if we didn’t get rewarded with the views. So we headed off to the area where Mahon Falls was and found a nice peaceful spot to relax before we attempted another hike the next day. Sheep were roaming the area and wandering past Helga and we had a good view of the valley with the falls at the back. 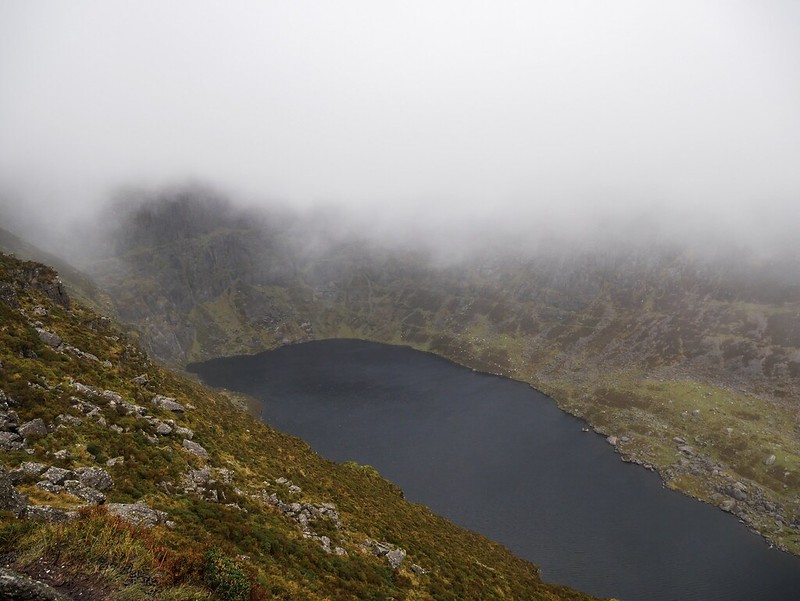 It was rainy with low cloud when we woke up so we baked a cake and sipped tea until the weather perked up. We followed a well made path to the base of Mahon Falls and then went off piste up a steep route that led us above the falls. Our plan was to hike up towards Kilclooney Mountain and join onto the route we tried to hike yesterday above Coumshingaun Lough. But as we gain elevation a huge blanket of cloud swept our way and we had a total white-out. We were walking along a moorland covered plateau without a trail so route finding was a challenge. If we didn’t have a map on our iPhone we’d of been totally lost but thankfully we’re pretty good at map reading. After an hour of walking through the unknown and just before we reached the cliffs above the lake we decided to give up, it wasn’t fun walking in such shit conditions so we went back to Helga. 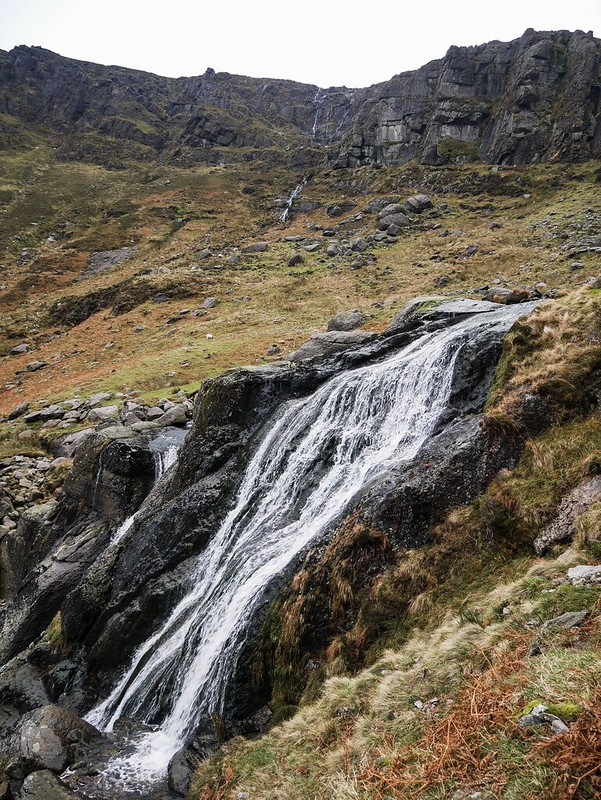 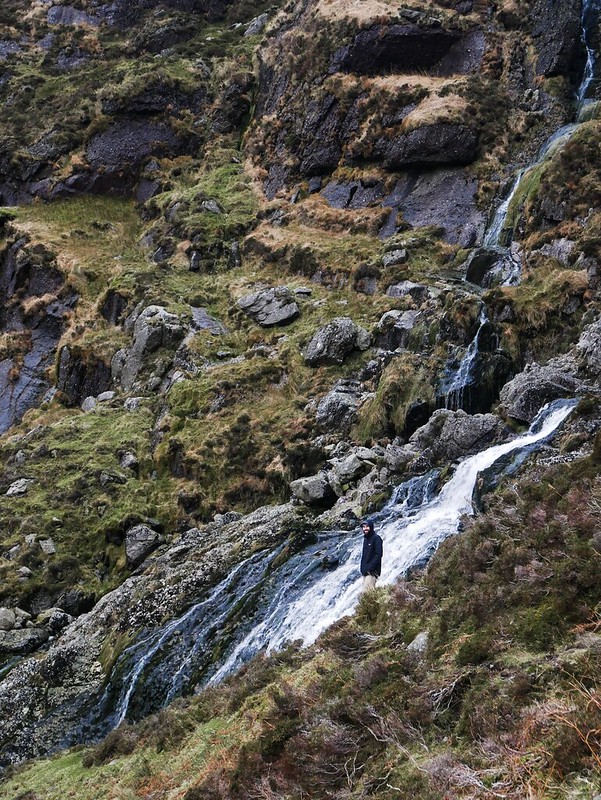 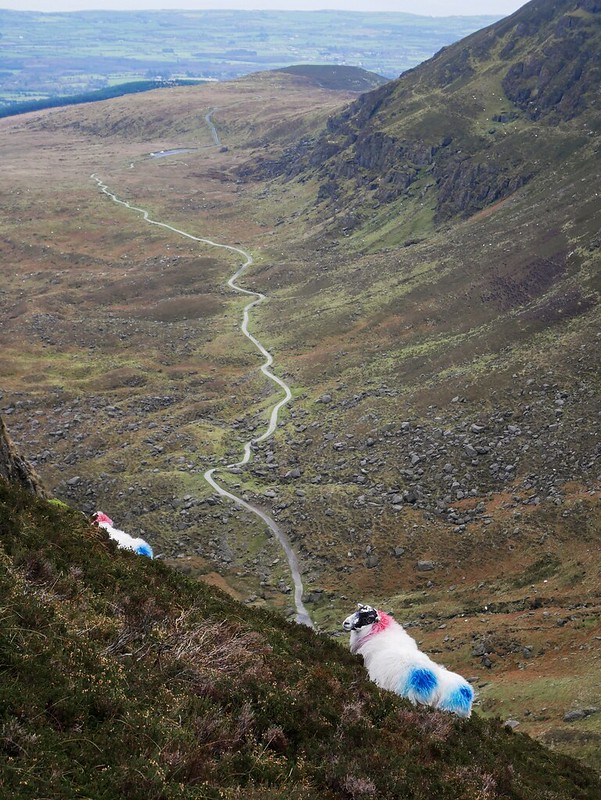 Sadly just before we went to bed that night a car with some absolute twats inside stopped on the road in front of us and honked their horn repeatedly. Eugh. This is the worst part about living in a van, young lads thinking their cool and hard by intimidating people. I’m often asked if we get scared parking up in the wilderness and the answer is always no, humans are the scariest thing so that’s why we try our best to avoid them. I felt very uncomfortable and I had Craig with me, I’d be terrified if it was just me in the van alone. They came back again at about 1am, shouting and honking before speeding off. It’s so annoying as it was the most peaceful location where barely a car drove by. Shame that low life’s like that have nothing better to do. 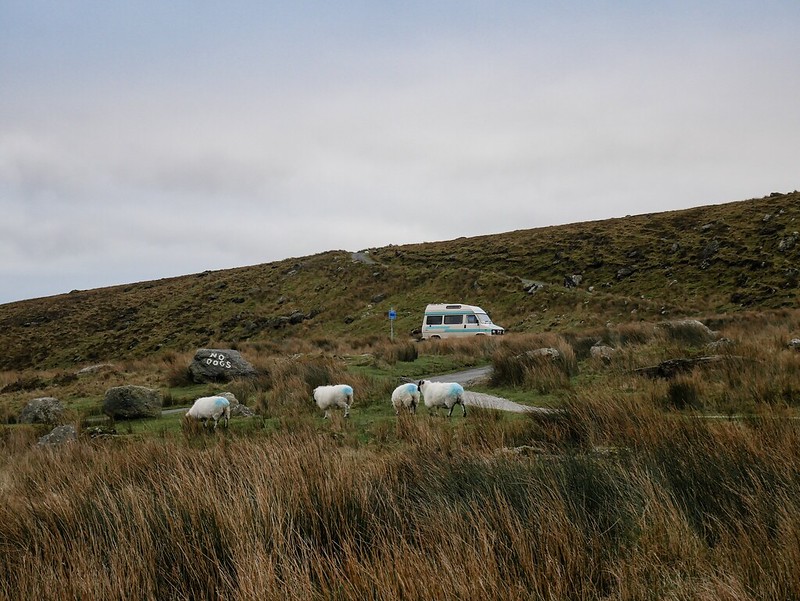 I had a terrible night sleep but somehow Craig slept through it all, I didn’t feel it was worth waking him up when they returned at 1am so I just laid there having hot flushes of panic instead. We were happy to leave the area and roll back up the magic road again, this time heading towards the coast. The area we were heading to was known as ‘The Copper Coast’ and it’s a UNESCO global geopark with ruins of the 19th century copper mines that sit on the cliff-lined coast. We headed down to Ballydowane Cove which was a pretty beach with jagged rock formations rising out the sea and huge cliffs. 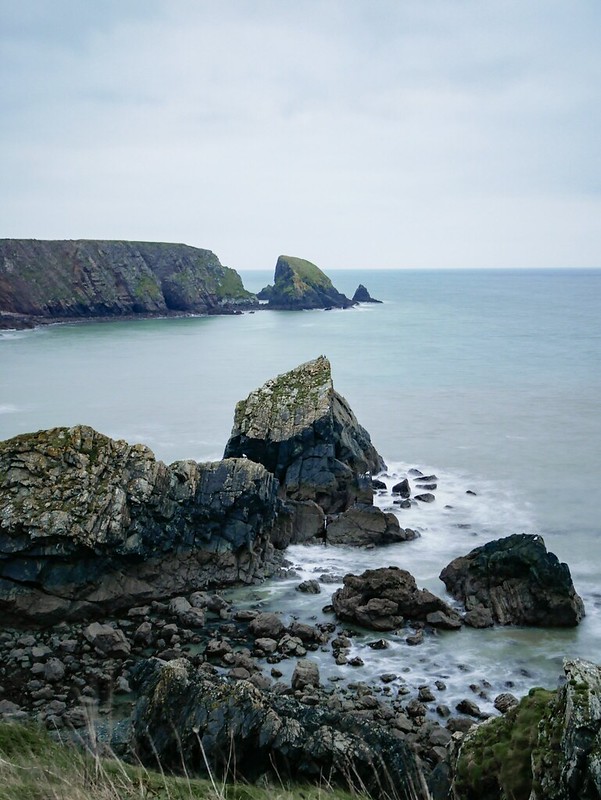 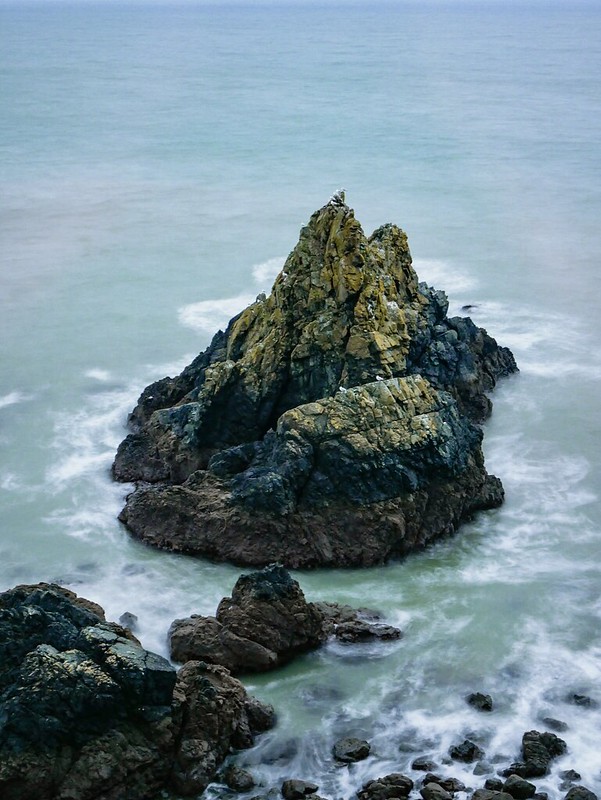 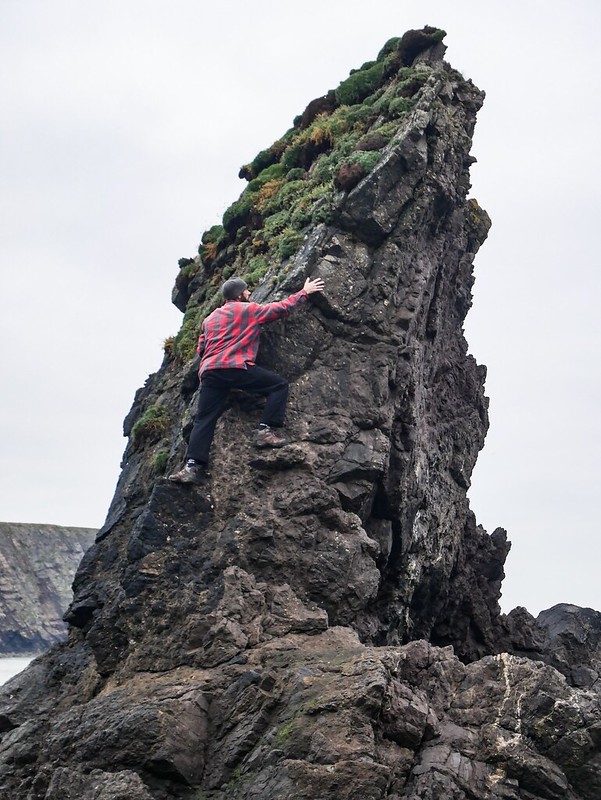 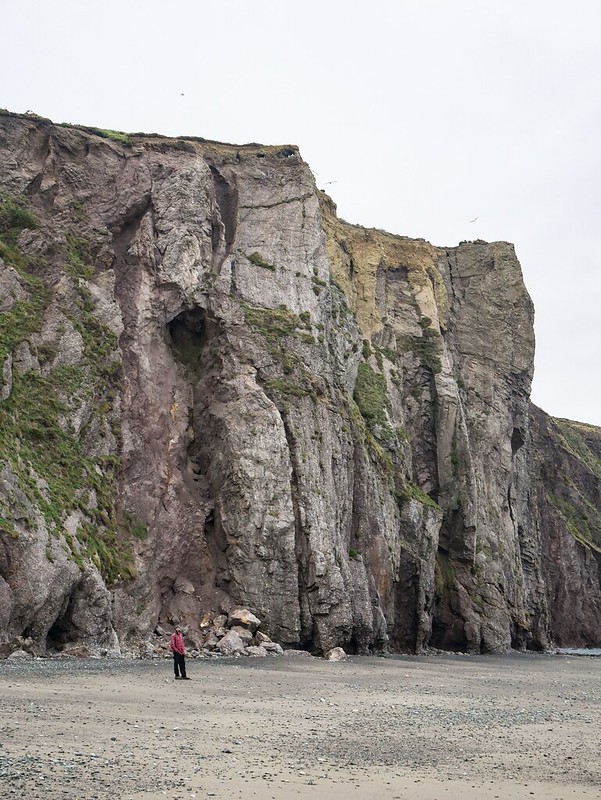 As we veered back inland we pulled up to visit Dunhill Castle. It sort of had a grassy bank rising up the side of the ruins which led us to the back of the second story where we were able to go inside. It looked like the back area had been detonated as it was all quite exposed and we were able to climb up some narrow rocks and stand on the roof which was pretty cool and Craig was able to feel like the king of the castle. After that brief stop we drove all the way to Rosslare where our ferry will leave from tomorrow so we parked up in a lovely little spot by the sea for the night. It was a nice place to stay and it meant we could do a walk along the never-ending sandy beach and look for little pieces of sea glass. Now it’s time for us to bid farewell to Ireland after 6 wonderful weeks exploring the country. 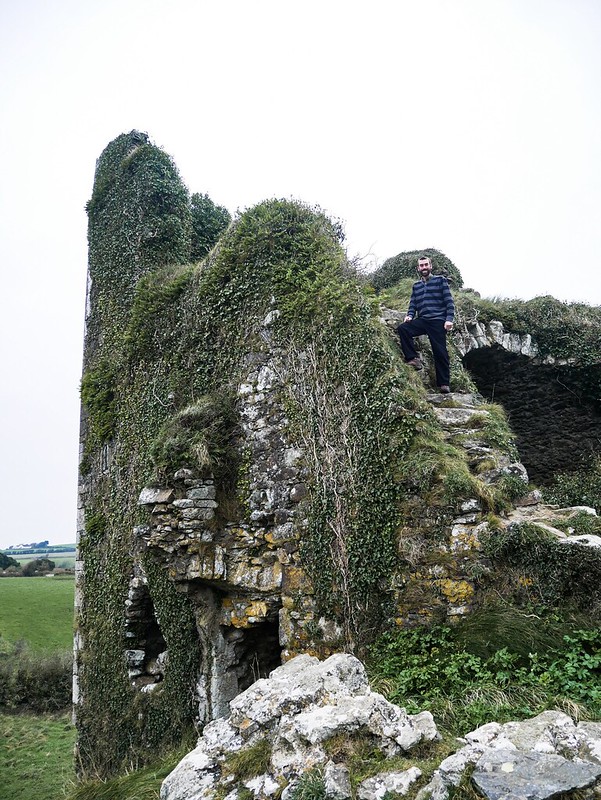 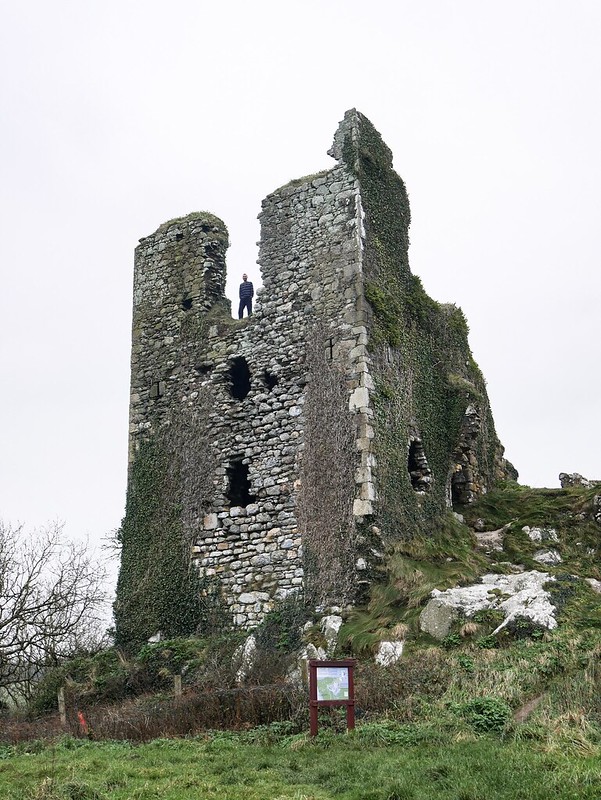