Scotland is renowned for getting it’s fair share of rain and we were about to get our worst stint of weather on this whole trip. The forecast was suggesting about a week of heavy rain which basically meant no hiking for us because we’ve learnt that it’s just not fun getting soaked and having nowhere to dry everything. So we made our way south and to be honest it was the best sort of rainy day we could of asked for; rain showers were passing through and then the sun would shine down on us. It meant we had the most vibrant rainbows, sun beams and walls of rain falling through the sky. When we pulled over in a village for lunch we noticed two people in the sea, in the pouring rain! They were sitting amongst yellow seaweed but it didn’t seem to faze them and they were rewarded for their efforts with a huge rainbow that appeared right behind them. 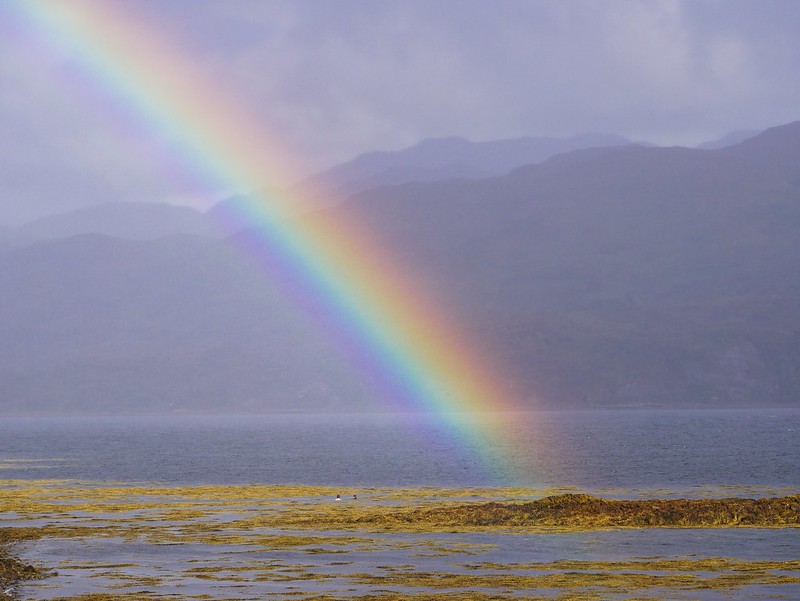 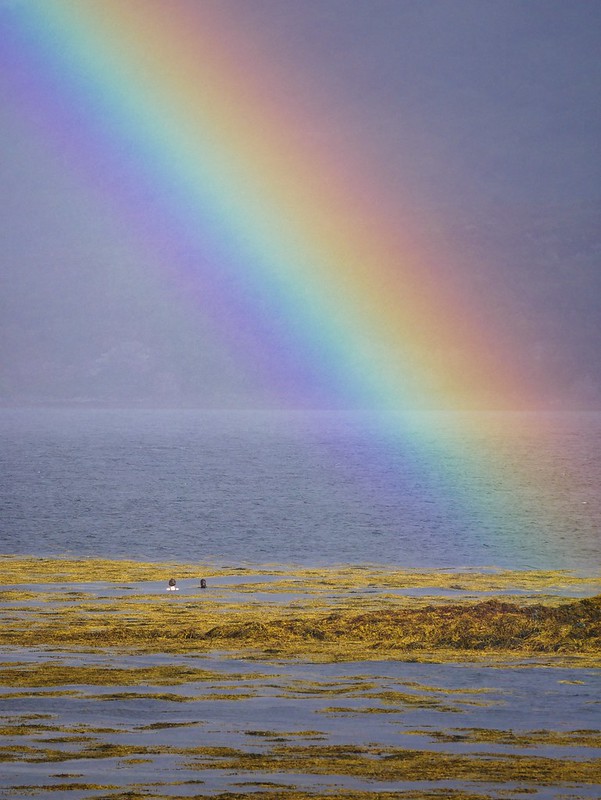 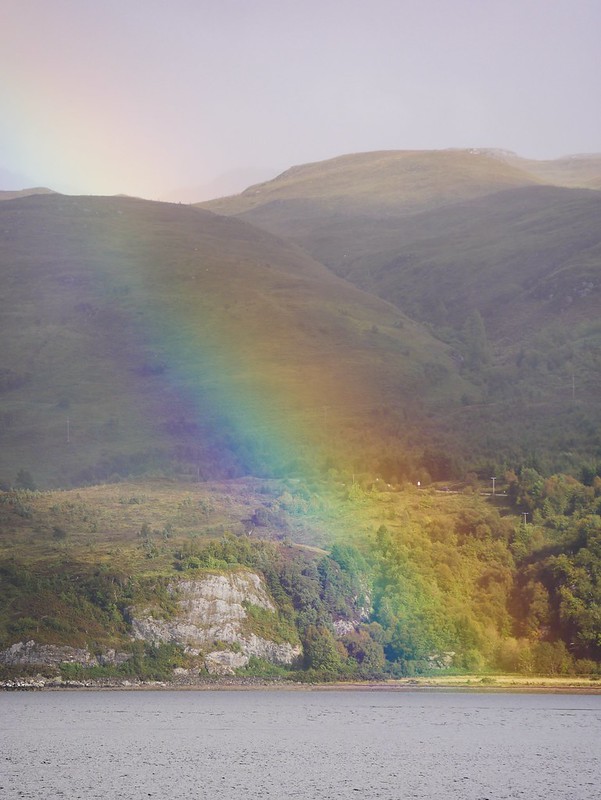 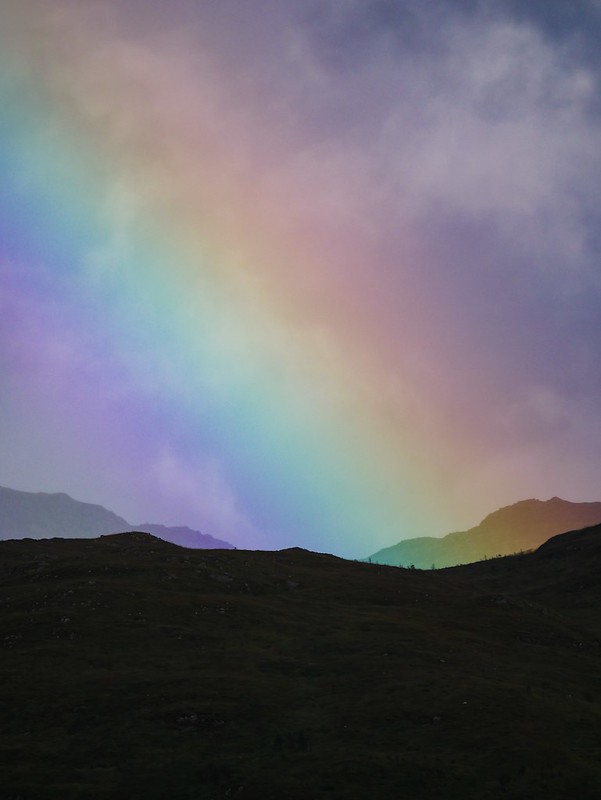 The next few days were spent near Loch Duich while we waited for the rain and wind to ease. We weren’t able to hike the mountains so in the meantime we did some short walks between the rain showers. One day we ended up walking through a valley which actually made quite a nice change to our strenuous hikes. A crystal clear river flowed through the valley and there were some nice deep sections which looked like little lochs amongst the river. We were supposed to have rain and 60mph winds but it was much nicer than predicted, so calm in fact that the water was completely still. We even decided to go for a refreshing swim and the river floor was sandy so it was a lovely entry point. The swim was timed very well as sporadic gusts of wind rushed through the valley shortly after our dip.

We continued along the gravel track through the valley until we reached a mountaineering cabin. The surrounding area was dotted with cows and it made the whole scene look like a little slice of Switzerland. One baby cow who was an absolute fluff-ball was very curious and started coming right towards us until it was just a couple of meters away and I stupidly moved my foot, causing the wee thing to gallop away to it’s mum. 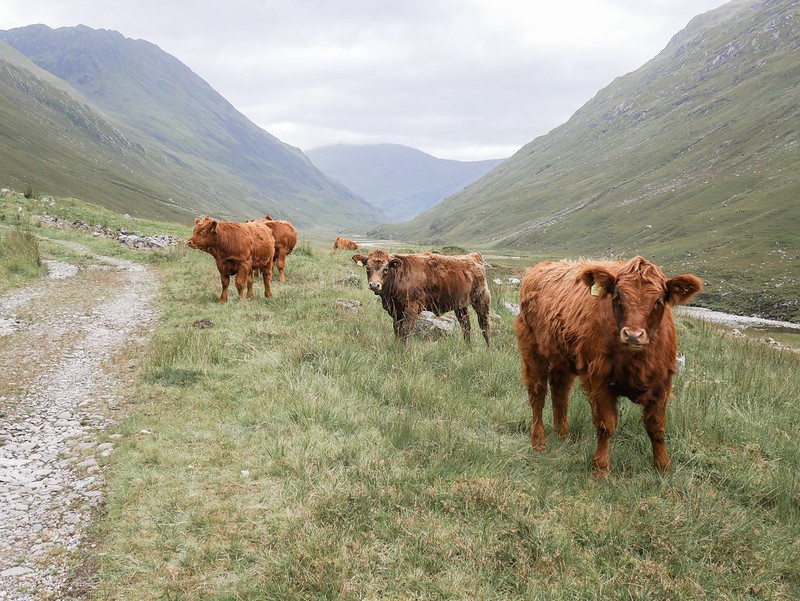 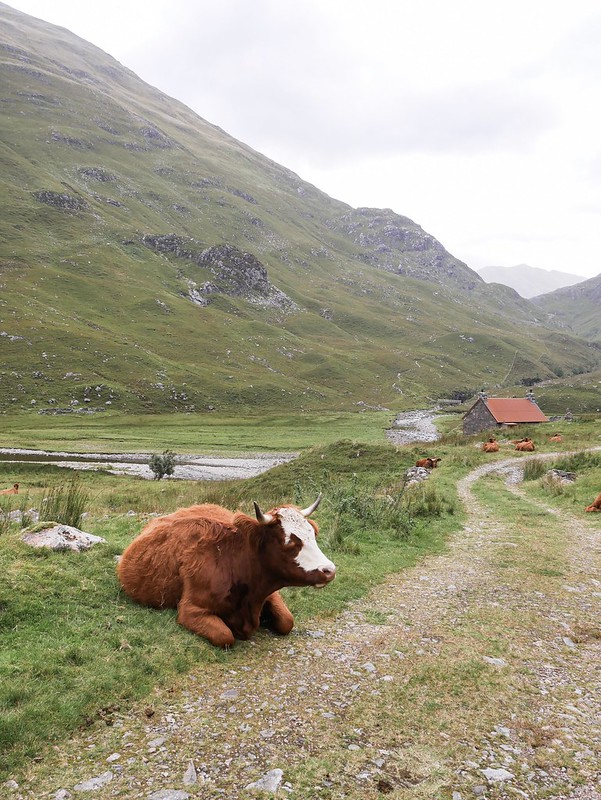 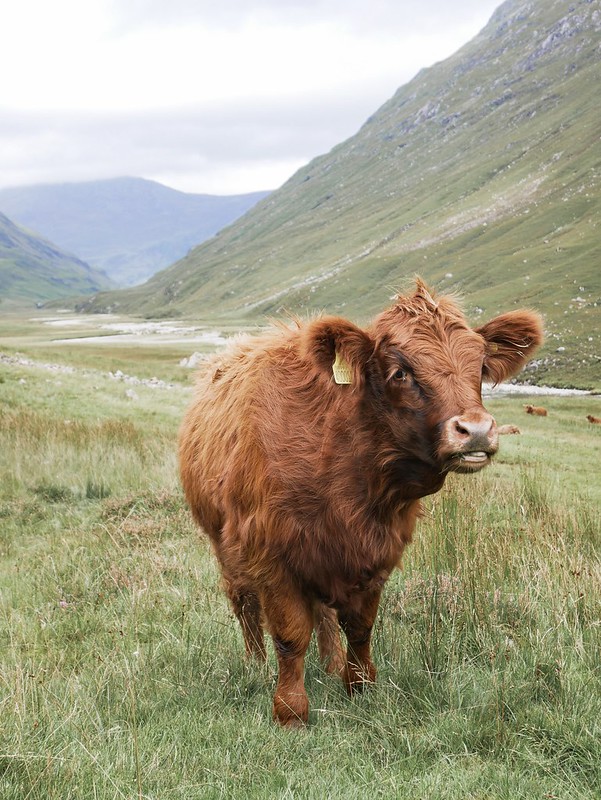 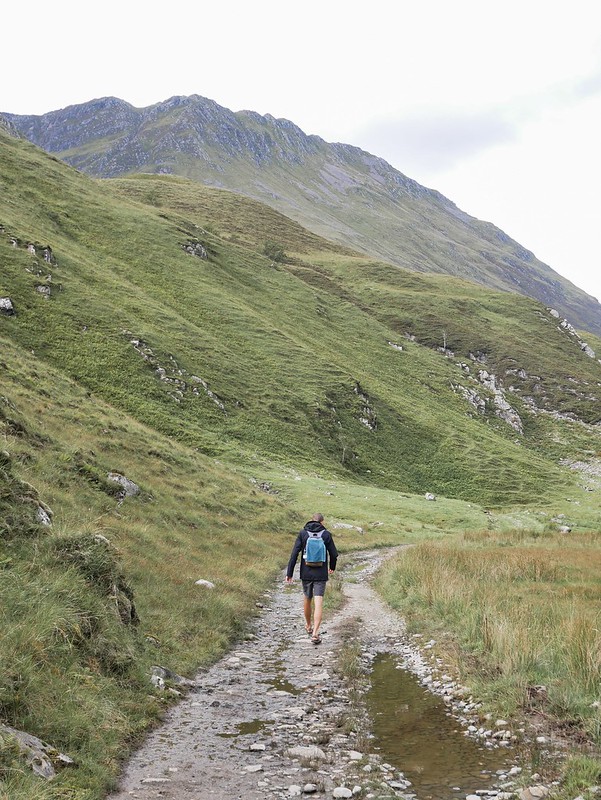 Finally after extreme winds and rain preventing us from hiking up summits we had a slightly better forecast. I mean, it still wasn’t great with a 50% chance of rain but at least the winds had died down which meant we could attempt The Saddle hike, traversing the Forcan Ridge, said to be one of the finest ridge hikes in Scotland with a nice section resembling a knifes edge.

A good stone trail helped us gain elevation quickly and Helga looked so tiny parked up in a lay-by way below us. It wasn’t looking promising for views as it was pretty cloudy but they did begin to part and we got a few glimpses of the mountains across the valley. Even though it felt like the weather was improving the mountain we were aiming for still had a layer of cloud coating it’s peaks. We soon reached the start of the scramble hike along the ridge and we struggled at the first hurdle. It was just a really tricky rocky area to climb up without any good hand holds. I began re-reading the hiking description on my phone and there was no mention of the start being tricky which was a little disconcerting. But we made it up the first challenge and began our rock scramble up the ridge. The cloud began to clear off the mountain tops so we managed to get some good views of our route. 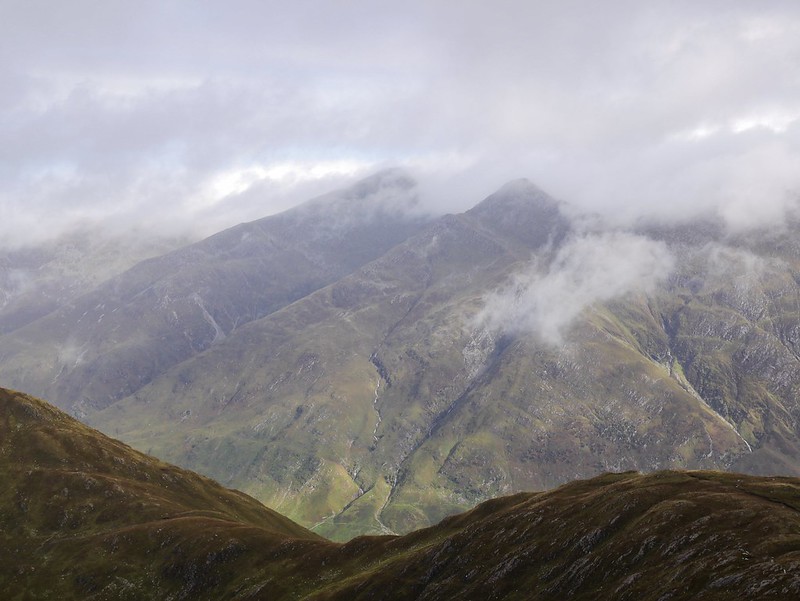 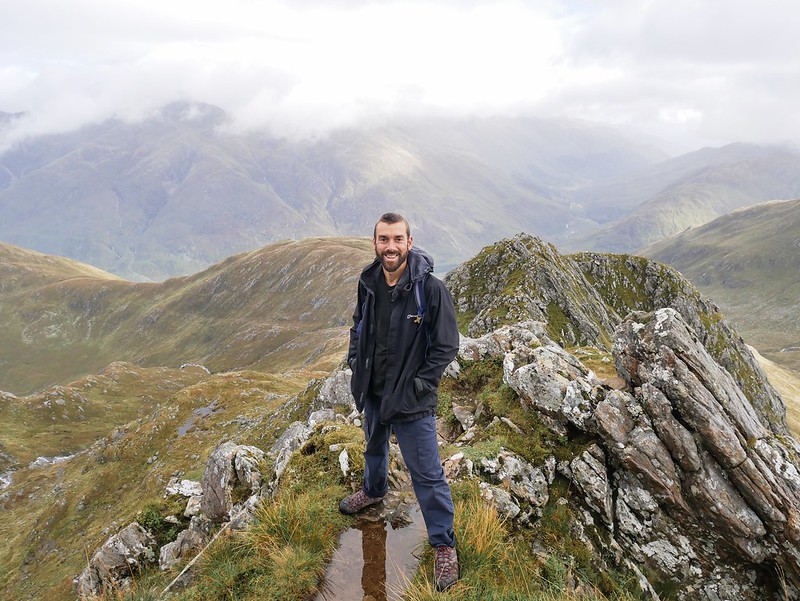 The ridge soon became very narrow, almost like a knife edge of jagged rocks but I never felt uncomfortable or overly exposed. Even though it was less than a meter wide at times there wasn’t a vertical drop below us, it was quite a gradual, grassy slope dotted with rocks so I felt like if I fell I’d only break a bone or be bruised as appose to dying, which was a relief. 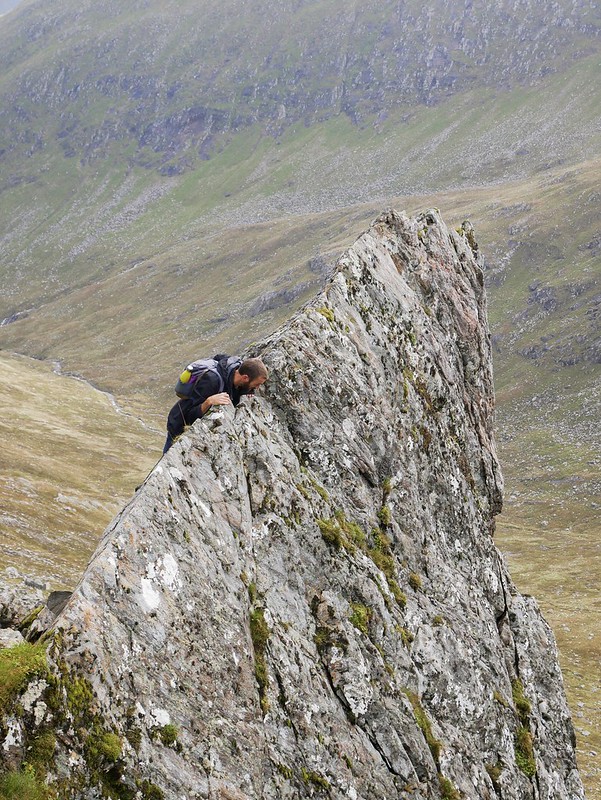 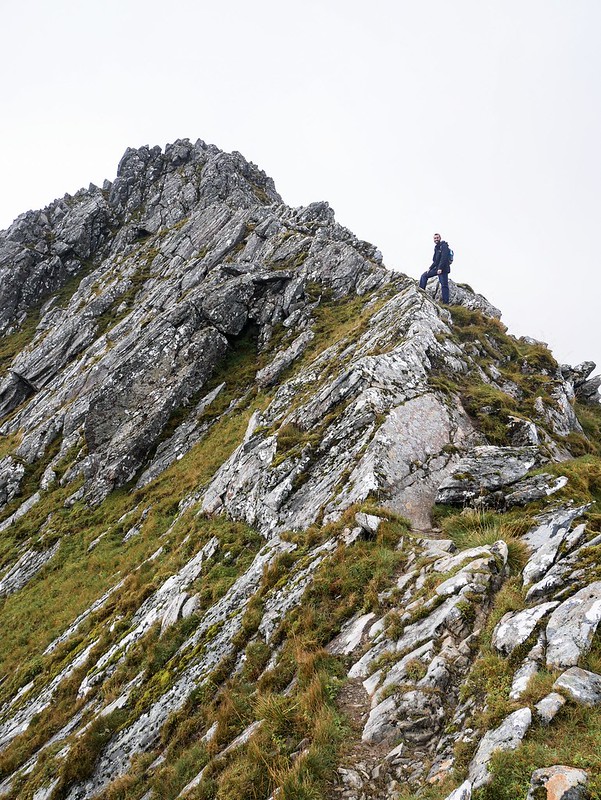 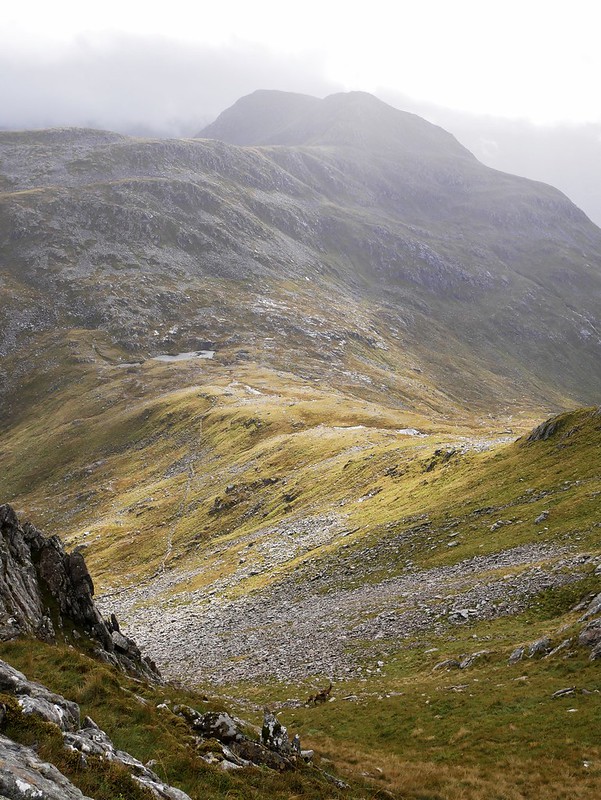 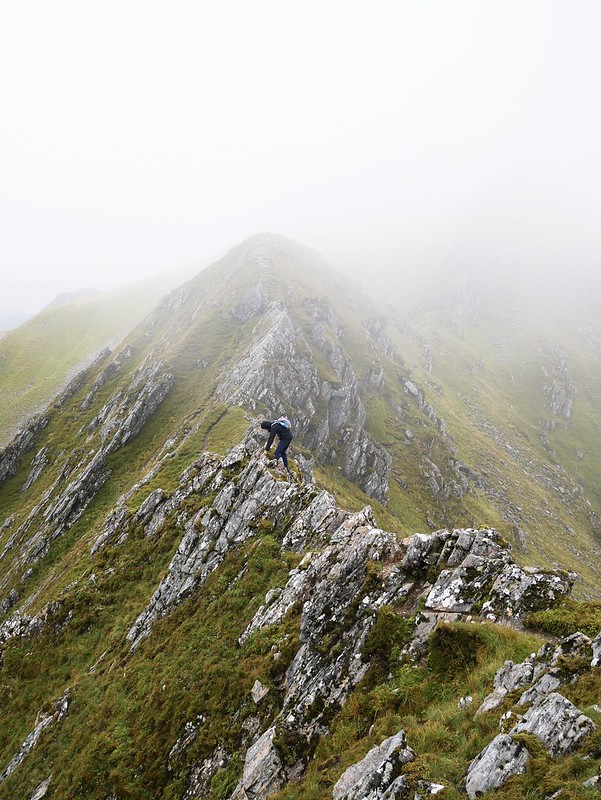 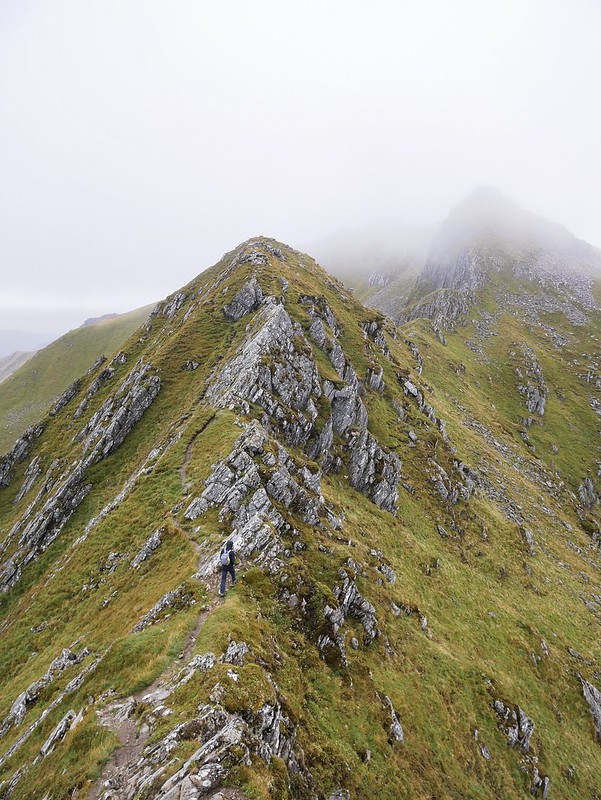 There were many ups and downs on the scramble and one section involved a bypass route to avoid a very tough section. The bypass was basically an extremely steep, dusty and heavily eroded track that was almost impossible to walk down without slipping. Gradually the cloud crept back in and we began to lose our views just before we reached the actual summit of The Saddle at 1010m. It was slightly anticlimactic arriving at the top and not getting any views but it didn’t feel like it would miraculously clear so we made our way back downhill. It was a rocky trail that soon turned into a boggy mess but the ground on either side of the bog was covered in little bilberries, they’re basically like wild blueberries, but smaller and more flavourful. It seemed to take forever to get back to Helga and before we could sit down and relax we decided to have a cold water plunge in the river to freshen up. 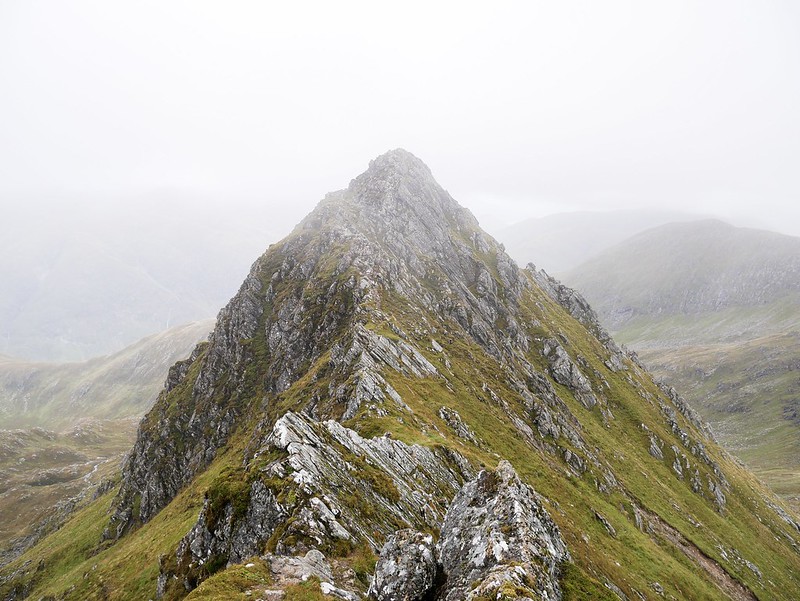 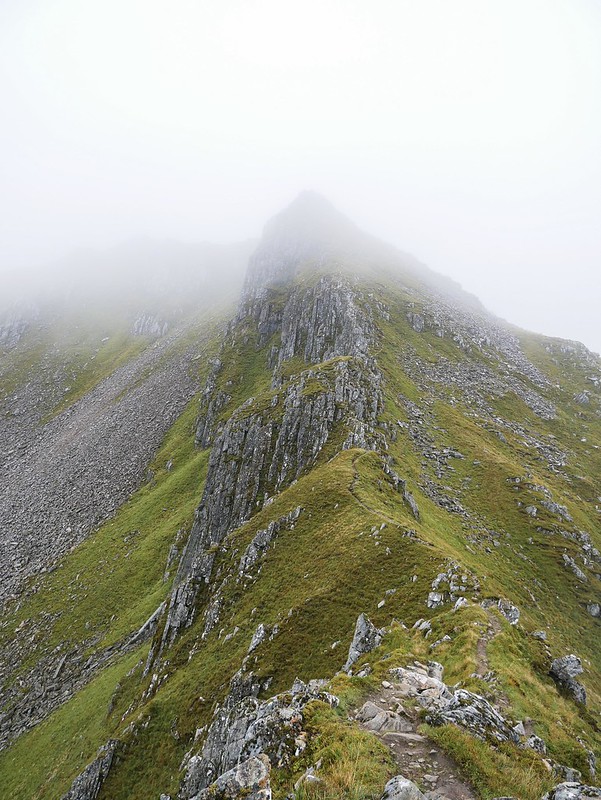 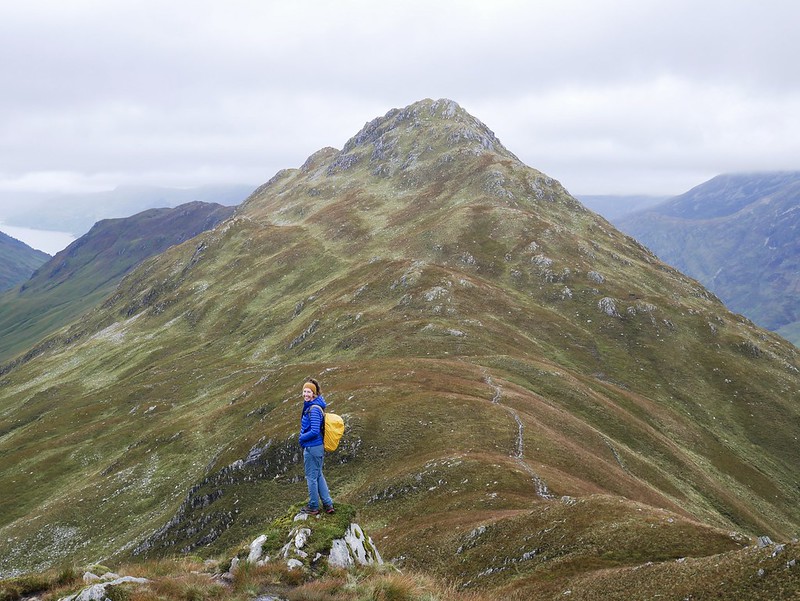 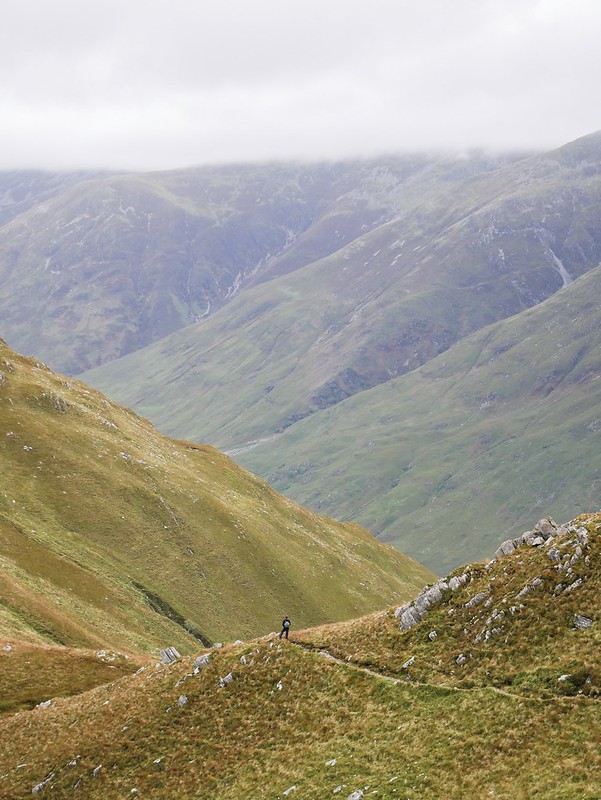 There were more mountains in the area that we’d of liked to hike but the weather was just terrible and we’d waited around long enough. So we made our way to the bridge leading across to The Isle of Skye. En route we passed the Eilean Donan Castle, set on a spit of land in a sea Loch. It’s said to be one of the finest castles in the UK but we disagreed. It was a nice old stone building but it didn’t look like a traditional castle. It didn’t have turrets or spires but there was a mix of weather which meant rainbows curved around the castle which was a rather beautiful sight. 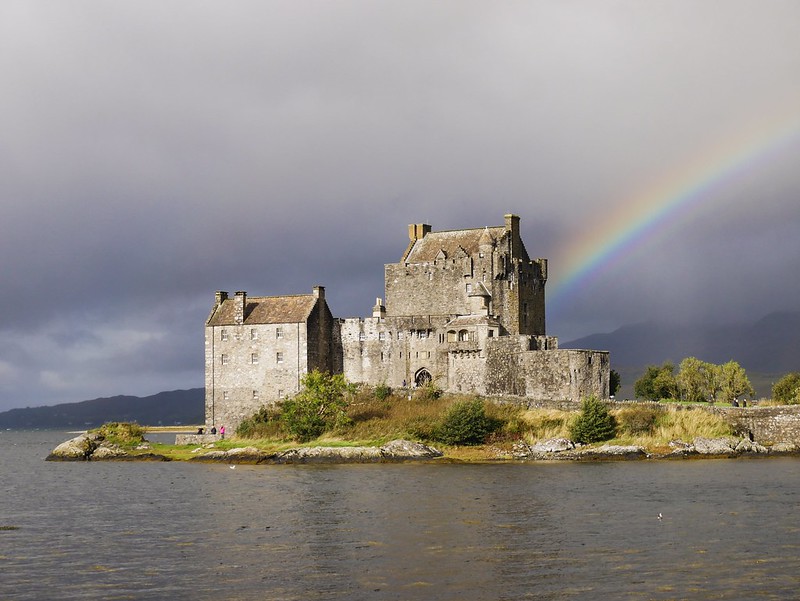