We woke up in a lovely spot by the sea with a huge beach and a line of turquoise water that suddenly turned navy as the water deepened. We were having a lazy day after tracking the orcas up and down the coast so we did some baking and a couple of short strolls nearby and then the sun made a little appearance in the late afternoon which was lovely. 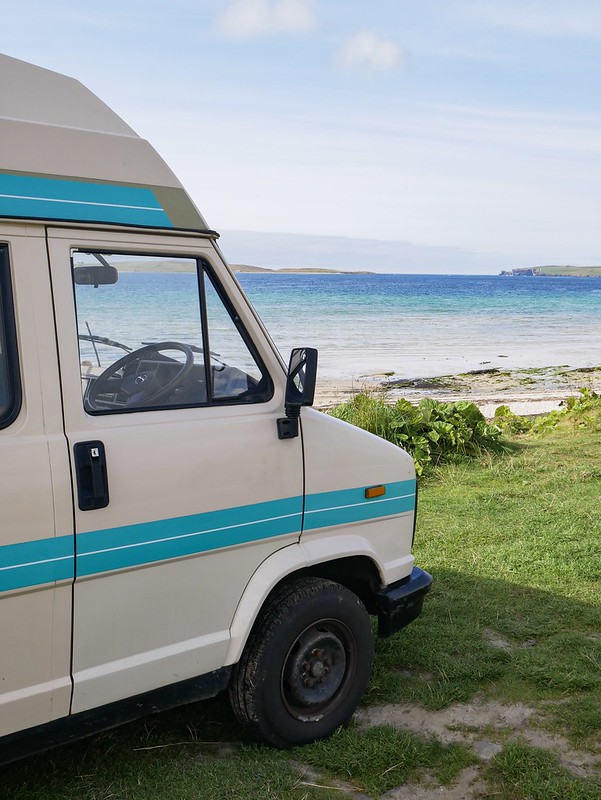 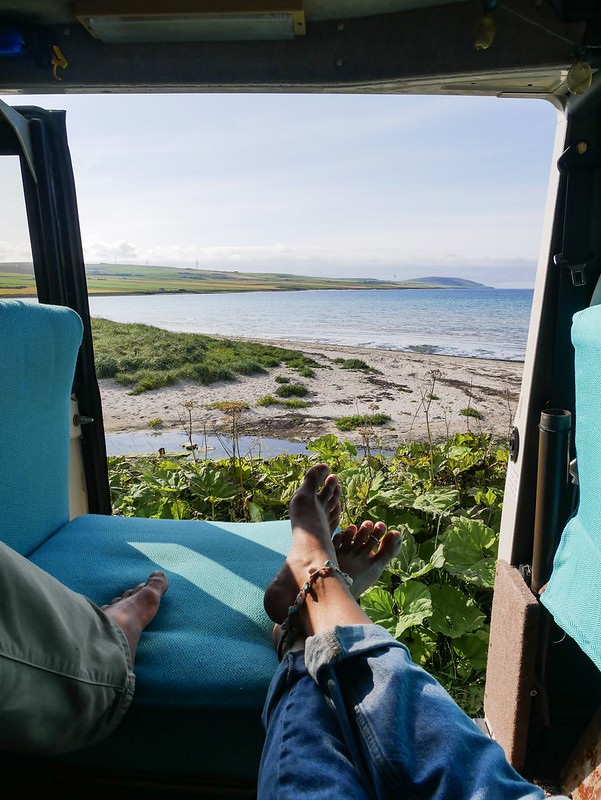 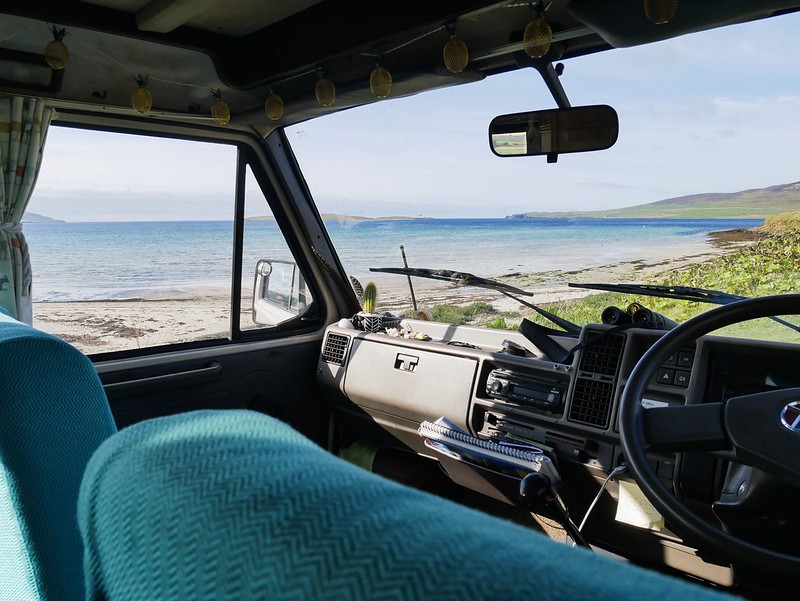 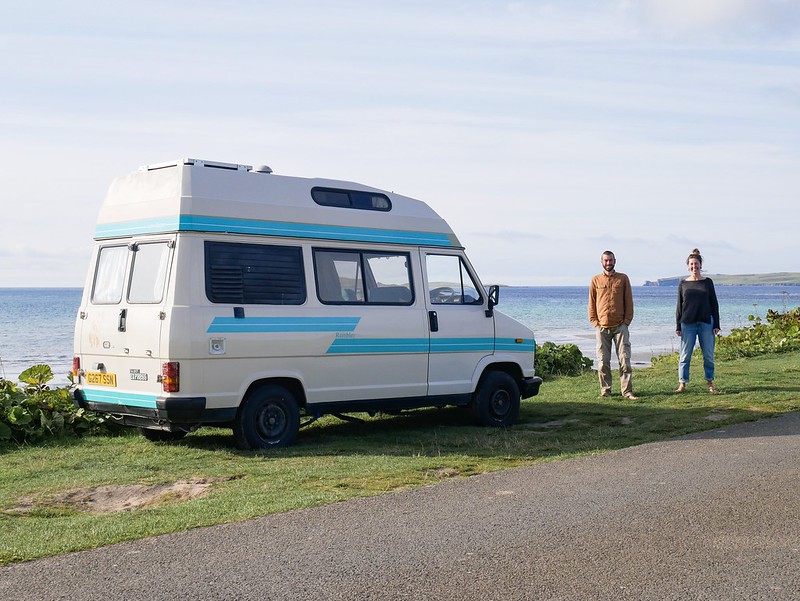 Just after dinner Craig said “I swear I just heard a meow”. Then a little grey cat appeared out of nowhere. She wasted no time and hopped straight into Helga, making herself right at home. Considering I’m not a huge fan of cats this one was so lovely and friendly. We have no idea where she came from as there weren’t any houses nearby so we thought it might belong to a motorhome further up the road. She was very cute but I was soon reminded how annoying cats can be. For starters they purr so loudly, it’s a constant noise like sleeping in a dorm room with someone who snores. Secondly she wanted to sit on our laps but then she would do that stupid thing where she massaged our legs and in doing so she stabbed us with her insanely sharpe claws. It was a nice novelty for an hour but then we encouraged her to go back outside as there was no way we were having her purring all night in our van. 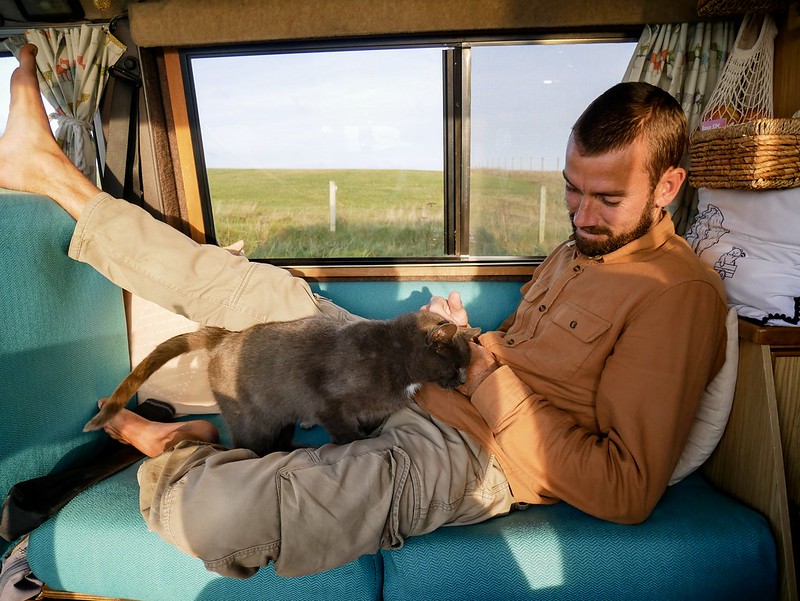 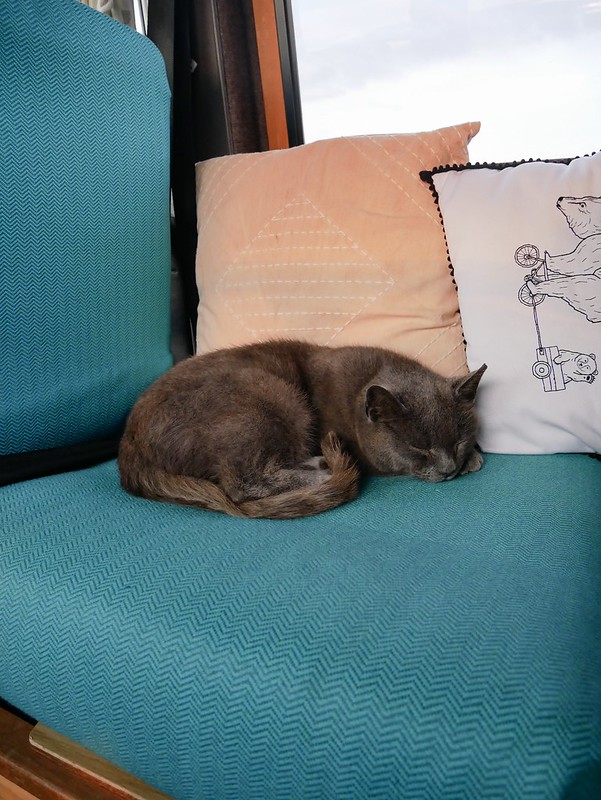 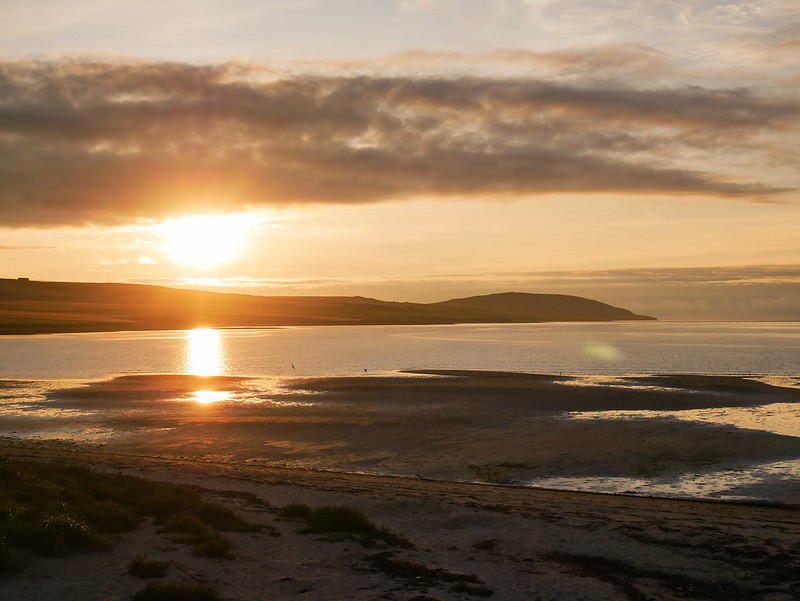 The following morning we pulled our curtains back and spotted the grey cat walking down the road towards us. I opened the door and she jumped straight in, looking very happy to be back on our sofa. Craig put down a small bowl of milk for her and then I frantically googled if it was actually safe for cats or just a myth and I saw quotes like “some cats can be lactose intolerant…” so we quickly snatched it away from her mouth and poured it down the sink.

There weren’t any new sightings of the orcas around the mainland so we decided to continue exploring some of the sights in Orkney. As we drove to our first location Craig noticed Helga’s temperature gauge wasn’t going up and her fan didn’t turn on when we idled like it normally does. We popped the hood up and noticed two cables hanging loose. Hmmm…how could two cables suddenly become loose like that? Our suspicions went directly to the cat, a classic cat move, how could we of been so foolish to trust her. We reckon the cheeky bugger went under our bonnet and yanked a few cables, we really can’t think of any other explanation for it. It took a couple of hours to fix as we had to figure out which cable went where and call Craig’s dad who is our very handy go-to for mechanical advice whenever we have a vehicle issue.

Finally we were all fixed and headed out to see our first sight at the Loch of Stenness where there was a stone circle and the ruins of an old building or village. I’m sure if you’re interested in this sort of history it’s a fascinating place but to us it was just a pile of rocks. It was also a little laughable to us that Orkney is referred to as ‘Egypt of the north’. You have these humongous pyramids and perfectly persevered carvings (which in contrast I found fascinating) vs a one foot tall pile of stones and a few slabs of slate sticking out the grass. It just wasn’t our thing so we headed back towards Stromness to an area we liked by the sea to camp for the night. 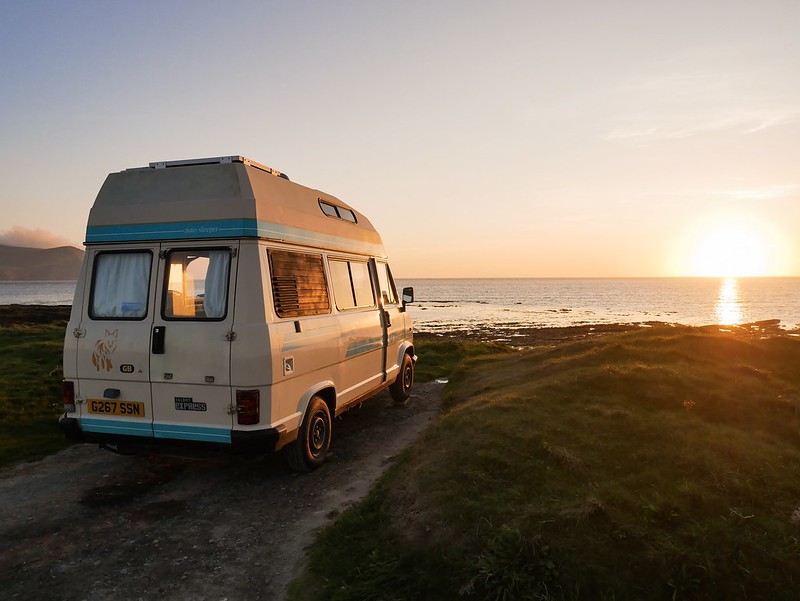 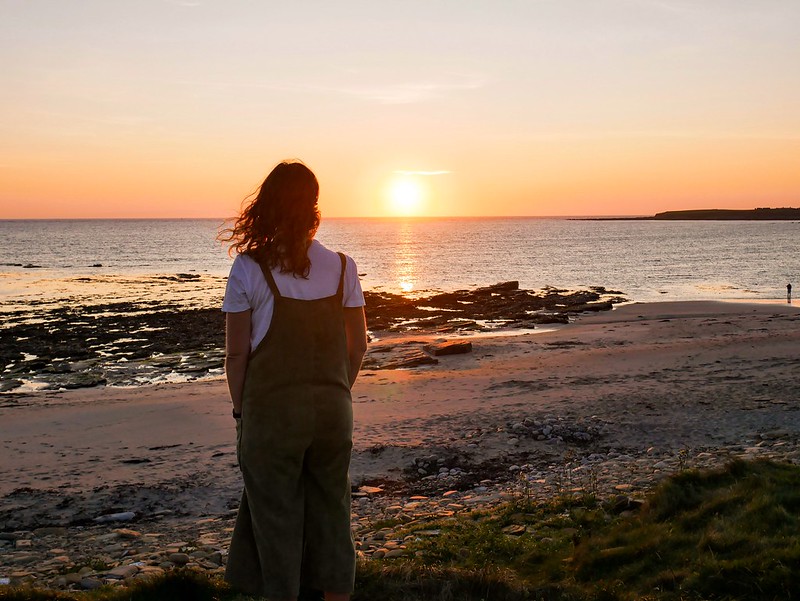 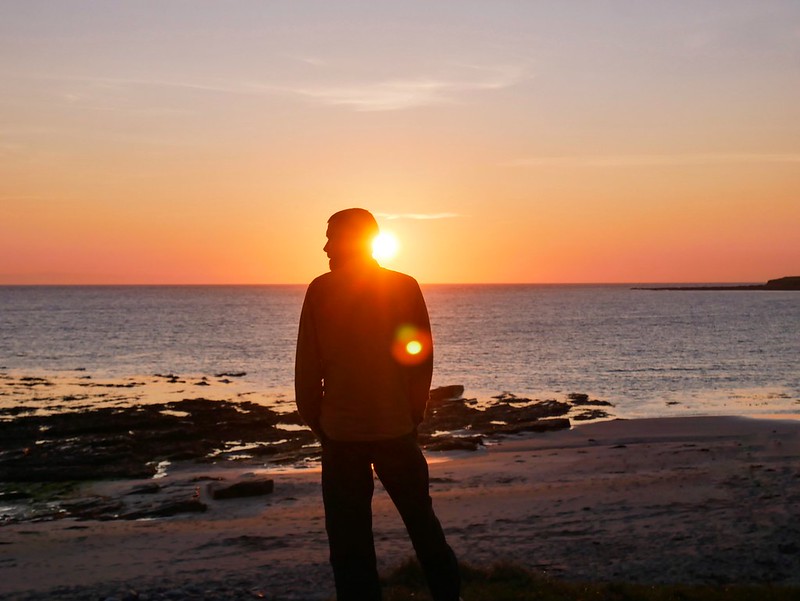 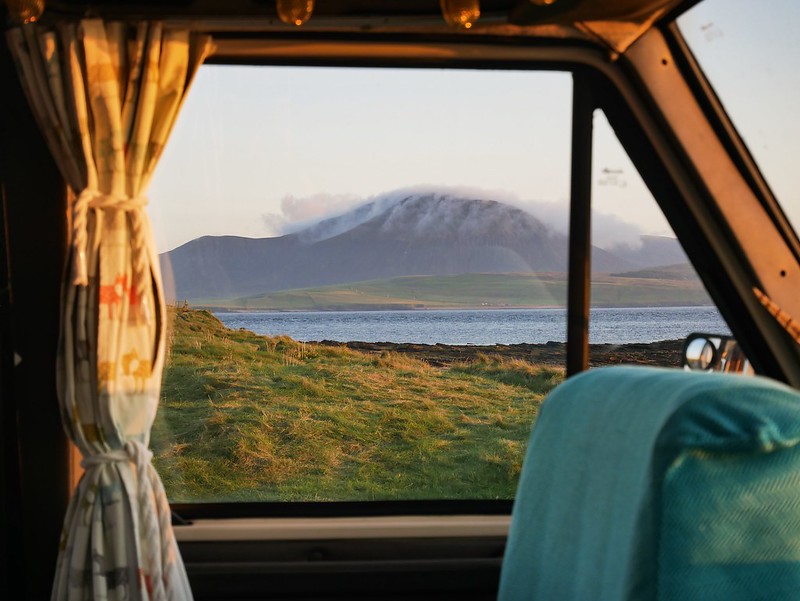 The sun came out in the evening and it was delightful outside, we even had our door open and a lovely family stopped by for a chat. It was a mum and dad with their 20 year old son who was getting ready to start uni. All three of them went for a long swim in the sea, as did we earlier in the day but only for a brief dunk, unlike these brave folk who sat in the water for a good five minutes or more. They came back and continued chatting to us and the son said he had a realisation in the sea, of basically where he was and what he was doing and how damn cool it was. He was enjoying being totally in the moment and it was a good reminder to us, we see so many things on our travels that it’s easy to become complacent and not appreciate what we’re seeing or doing. We were treated to a wonderful sunset and a great view of the clouds hugging the cliffs of Hoy island in the distance. 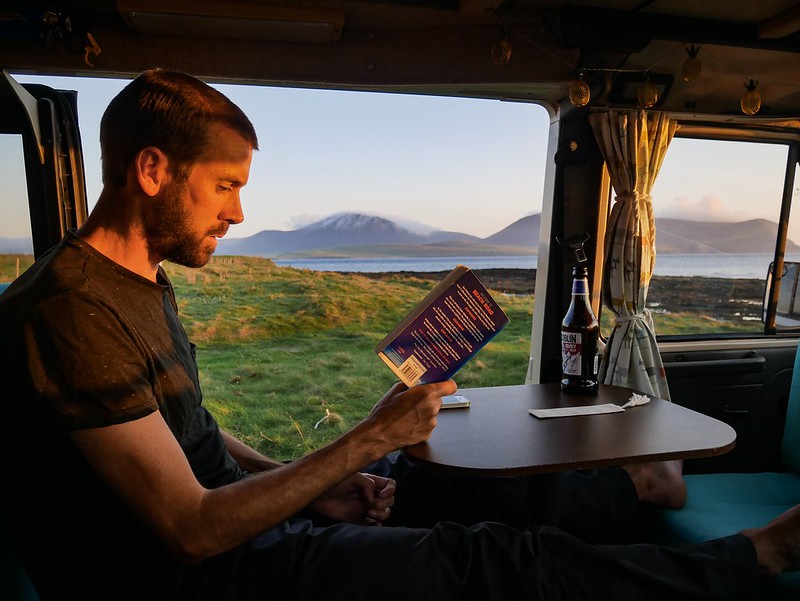 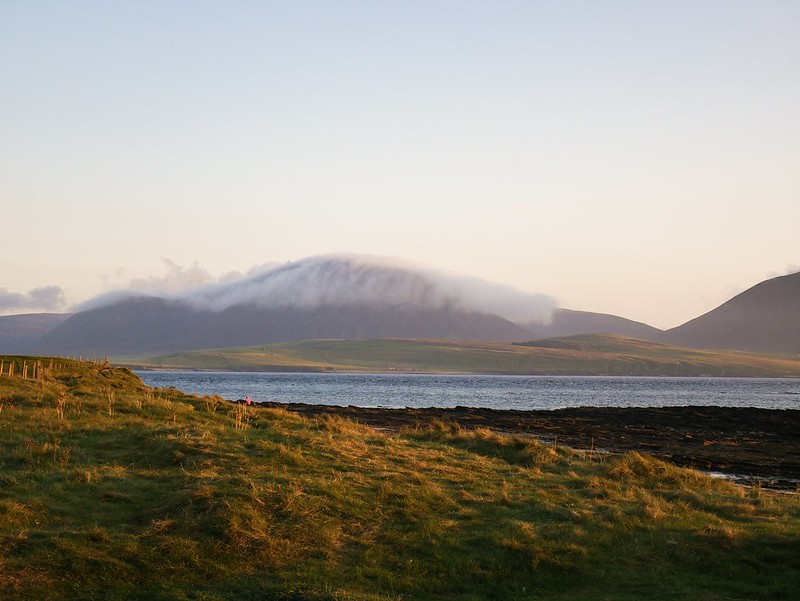 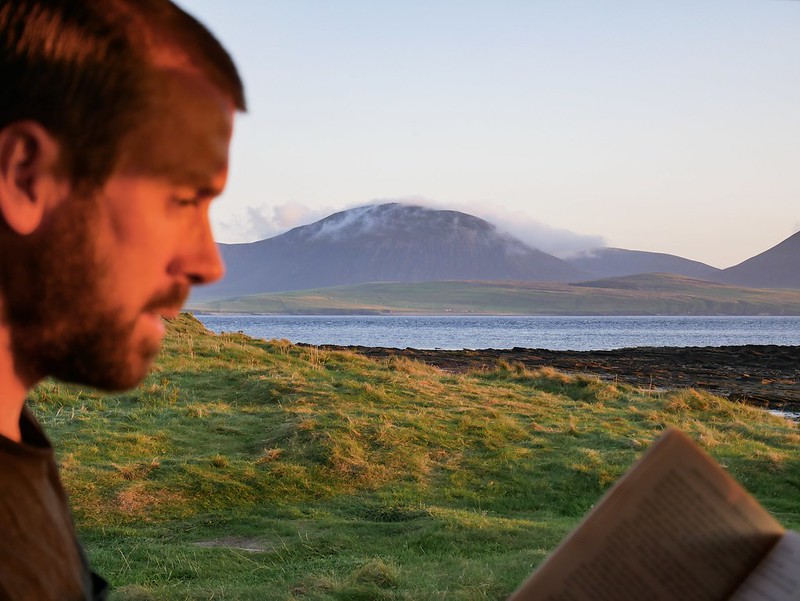 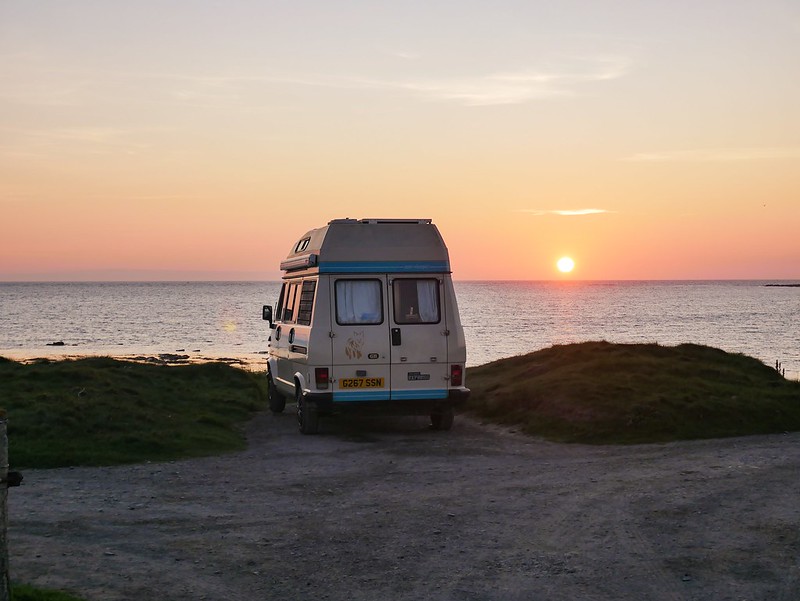 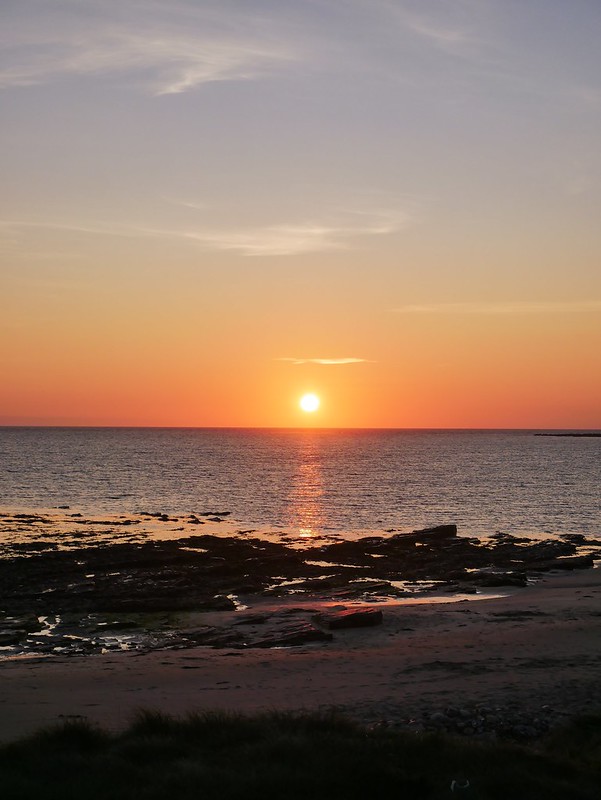 The next day we headed along the south shore of the mainland and found another beautiful beach. It was tucked in a narrow inlet below the road and a stairway led through a field of beautiful pink fire weeds all in bloom. 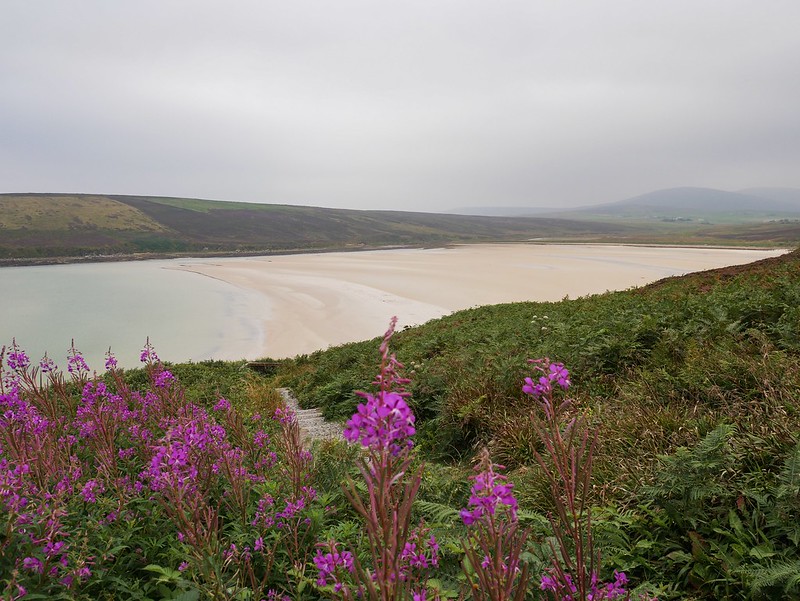 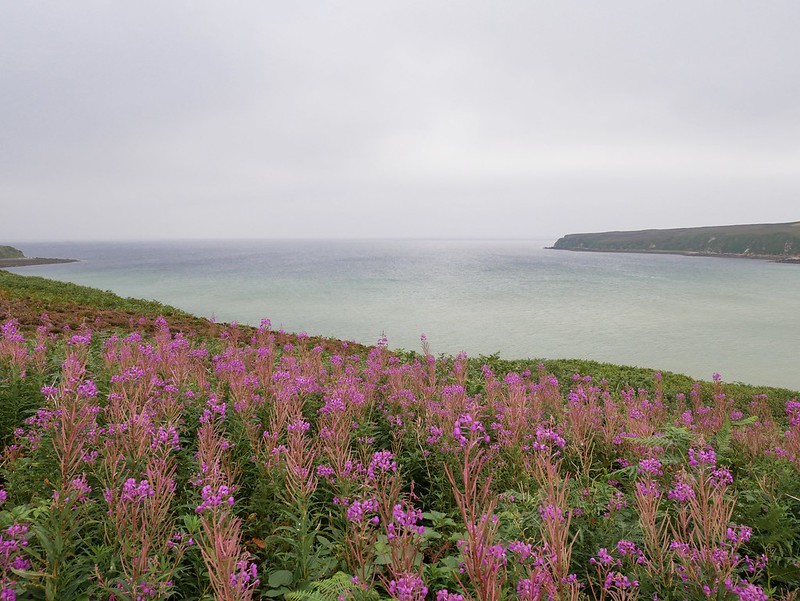 It had been four days since our last orca sighting and still no sign of them. We’d seen everything we wanted to see on Orkney so now it really was just the orcas keeping us here, and if they weren’t around then maybe that was our sign to leave. On day five we decided to make a phone call to the ferry company and book onto the afternoon sailing. We made our way down the string of islands to South Ronaldsay, passing the shipwreck in incredibly calm seas. After a little stroll around Hoxa Head where we spotted some porpoise we made our way to St Margaret’s Hope and drove onto the ferry. It was a strange feeling, albeit Orkney was considerably more busy than Shetland we knew the mainland would be even more busy and that worried us a bit. We ended up spending 6 weeks on the islands and it was going to be a bit of a reality shock going back to a popular area. 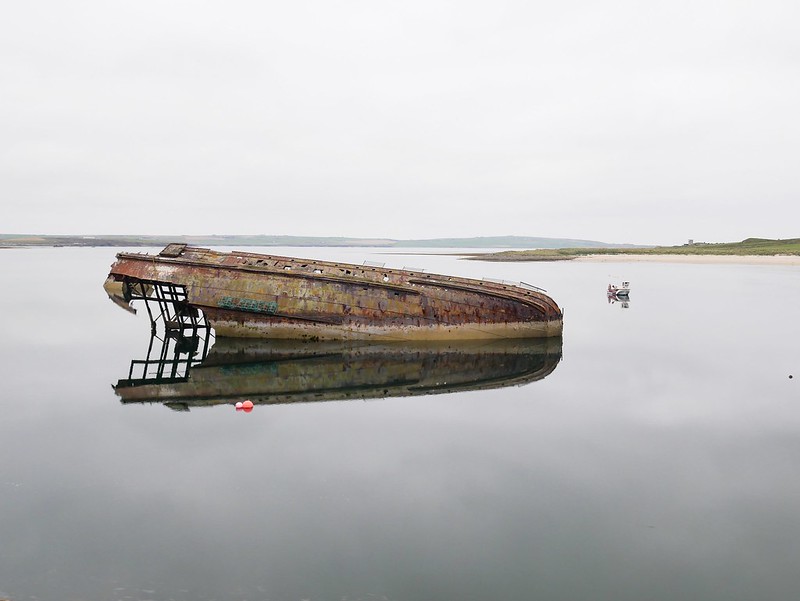