After spending our final day in Luxor relaxing in a hammock on a roof terrace with a view of the Nile, it was time to head back to the coast. We wanted to visit Marsa Alam in the south of Egypt to snorkel some of the top sites in the world, but it was complicated and timely to reach from Luxor so we just picked the easy option and went back towards Hurghada. This time however we decided to spend a couple of days in Safaga which is a small town south of Hurghada. We tossed up the idea of treating ourselves to an all inclusive style place (a first time for everything!) but in the end we decided it wasn’t for us, just googling what an animation team was was enough to put us off. So we compromised and picked a nice hotel with a private beach for a reasonable price. It was a strange place as we seemed to be the only people staying there. There were so many staff and they all stood like statues when we walked in. The room was nice and modern but they didn’t upgrade us into one with a sea view which was silly as they had the whole hotel spare and we would of left with a much nicer impression. Anyway, the beach area had lots of loungers and we had it all to ourselves but it was so rocky in the sea that it was basically impossible to enter without shoes. Metal fences kept the hotel ‘private’, if rather unsightly, but the odd local man was spotted peaking through the gaps while I stuck my middle finger up at them. 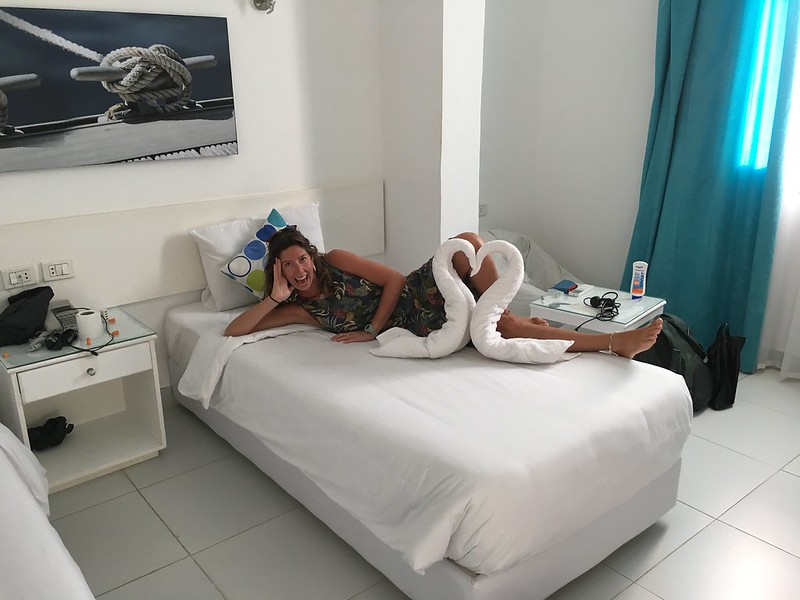 Safaga was described in our guide book as “The centre of town is an unattractive grid of flyblown, dusty streets…”. To be honest we were surprised Lonely Planet gave it so much slack as it was actually the first clean town we’d been to. The streets were kept tidy and it certainly wasn’t a dust bowl. But it did lack people, it had a strange ghost-town vibe as we wandered around searching for a place to eat. There seemed to be so many abandoned buildings in the area, some looked like the business went bankrupt while others were just hotels that were never completed. We didn’t see any other tourists in the town which was a change and the locals were actually quite friendly, also something we hadn’t experienced much in Egypt. We managed to find an insanely cheap falafel wrap but we both got dodgy bellies a few hours later.

After a couple semi-relaxing days of sunbathing and dashes to the bathroom for diarrhoea we decided to head to Hurghada for our final few days in the country. We didn’t like Hurghada when we first arrived there but at least there were more options for food and we could swim in the sea. 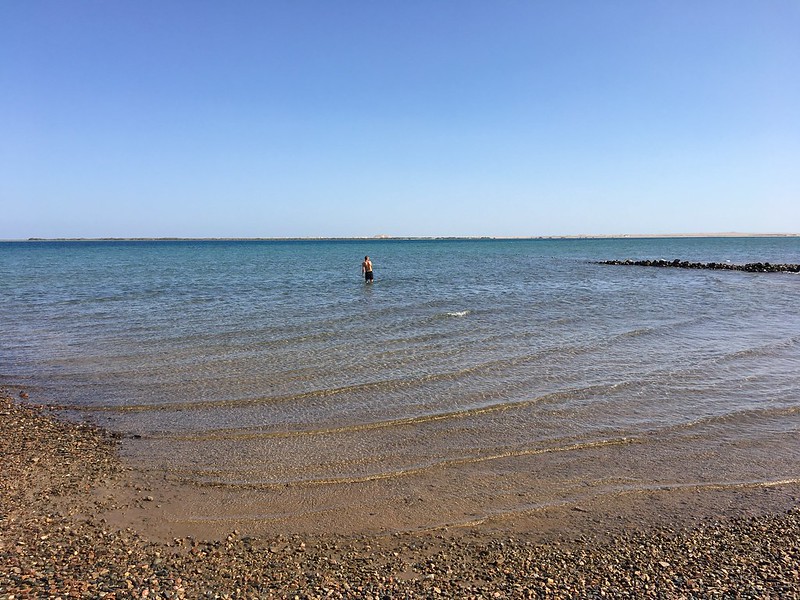 To get there we caught a minivan to the main road and then we entered a huge parking lot used for shared taxis. They were just estate cars that seated 6 people and we had plenty of aggressive men surrounding us telling us which taxi to get into. We’re always undecided on whether it’s better to ask and barter the price straight away, or wait until the end of the journey and see what the locals pay (a risk if you can’t get a good look). But we chose the latter this time, and luckily we managed to pay the local price without any dramas.

We hopped out when we were near the apartment we’d booked but still needed a taxi as it was sweltering hot. We laughed that a few years ago we’d of walked the 2km just to save 50 cents. The apartment was the cheapest one we could find with acceptable reviews at just $11 a night. The WiFi was very iffy and the beds full of springs but the hosts were sweet and gave us extra blankets so we could soften the mattress. The owners basically rented out most of the apartments in this block but it was in a really rough neighbourhood. Not in a dangerous way but in a poorly kept way. The road was made of dirt, not tarmac and it was riddled with rubbish. There were huge piles of uncollected rubbish and dumped furniture on every corner and we even had a rat run right in front of me. The potholes were literally just filled with rubbish that either got compressed down or blew in the wind towards the sea. Local shop owners swept their rubbish onto the street and then they clearly felt like their job was done, the road rubbish wasn’t their responsibility. It’s so frustrating to see everyone care so little about the rubbish situation. A few blocks to the left was the main pedestrian street with juice shops and eatery’s, so at least it was nice to be able to walk everywhere. 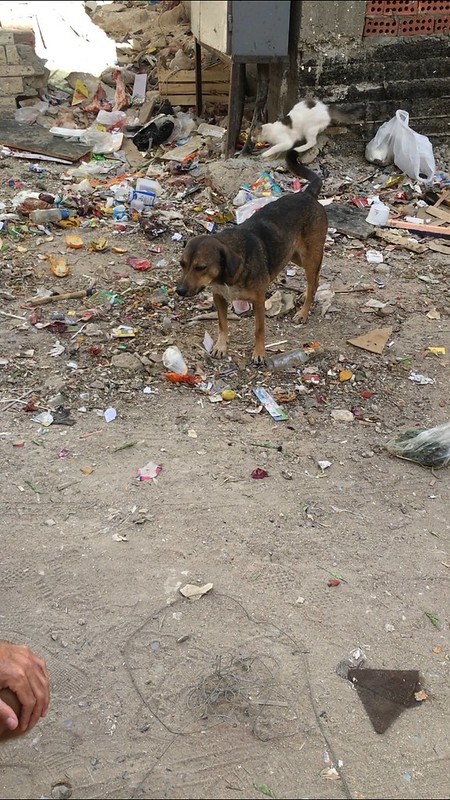 There aren’t any free beaches in Hurghada, their all owned by hotels or ‘public’ with a fee to enter. The public ones are the cheapest option so we checked out one for $2.50 entry. It was late in the afternoon so we just wanted to see if it was nice enough to come back to the following day. A local man soon started talking to us and he had amazing English. He was a funny chap and even though he sold boat tours around the islands he pretty much dissuaded us from doing another one (although my fractured elbow and near drowning incident was probably enough to put us off) so he seemed like an honest chap – wow, there’s a first. Then he offered us tea and we felt like he just wanted to hang out, although there was still a part in my brain saying ‘he’s going to ask for an extortionate amount of money for tea at the end – don’t trust him Lauren!’.

So we went into his little shop which had shelves filled with perfumes and glass jars of tea and we took a seat on a sofa that wrapped around the entire room. He recommended a local tea, I can’t remember what it was but it was red in colour and the actual tea looked like large whole spices. It was tasty and we enjoyed a few cups and a nice chat but then a friend of his popped in and shut the door behind him. Our host who I will call Sam got out some weed and said “you don’t mind if we smoke do you” oh fuck. Now I really felt like we were being set up, his police friends will show up and arrest us even though we’re not smoking. It was awkward but we just had to play it cool and hope we weren’t about to get ambushed. Sam’s friend seemed to get hit by the weed very quickly and left the room so it was just the three of us. Then to make the situation more weird Sam got out a pack of cards and did some seriously good card tricks. I was laughing while thinking “if he’s this good at card tricks he could slide some weed in my bag and set me up…”. I was probably laughing because I was unintentionally high from the damn fumes.

I had to wait for a silent moment between our conversation to bid him farewell, we thanked him for the tea and card tricks and he asked us when our last night was, saying he would show us how to do the card trick then. I lied, saying it was a day after we were actually leaving. Craig said I was a bad person for not trusting him, but I just wanted to play it safe, we were flying home after two years abroad and getting put into a Egyptian prison wasn’t on my agenda.

So the following day we headed to the beach and made a b-line to the further sun beds from Sam’s shop. We basked in the sun all day beside a couple of German’s who’s skin had turned into golden leather. Unlike in the hotel beaches, we were allowed to bring food to the public one so we had a delicious feast of nuts, dried fruit and the worlds biggest, most tastiest mango. Then we continued the theme at a bohemian style beach bar by the sea where we enjoyed mango daiquiri’s and mango flavoured shisha – this time a proper one which didn’t burn our throats! 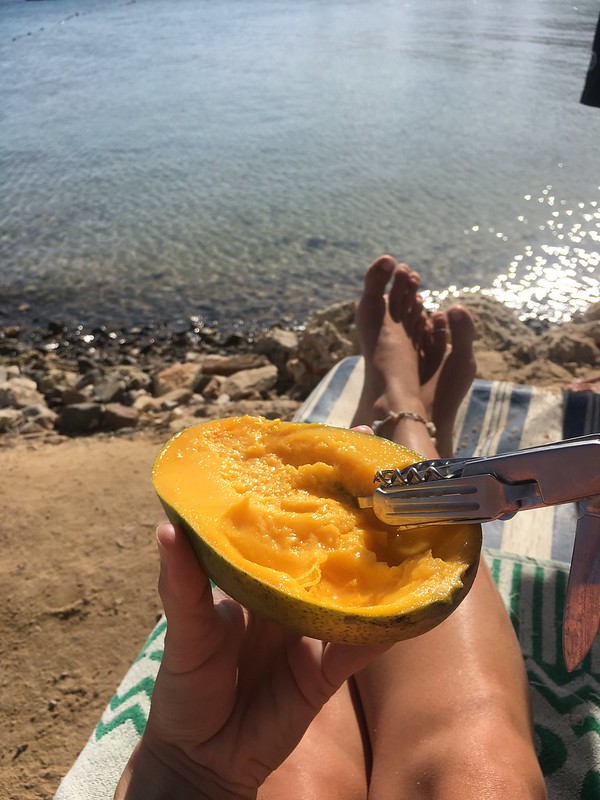 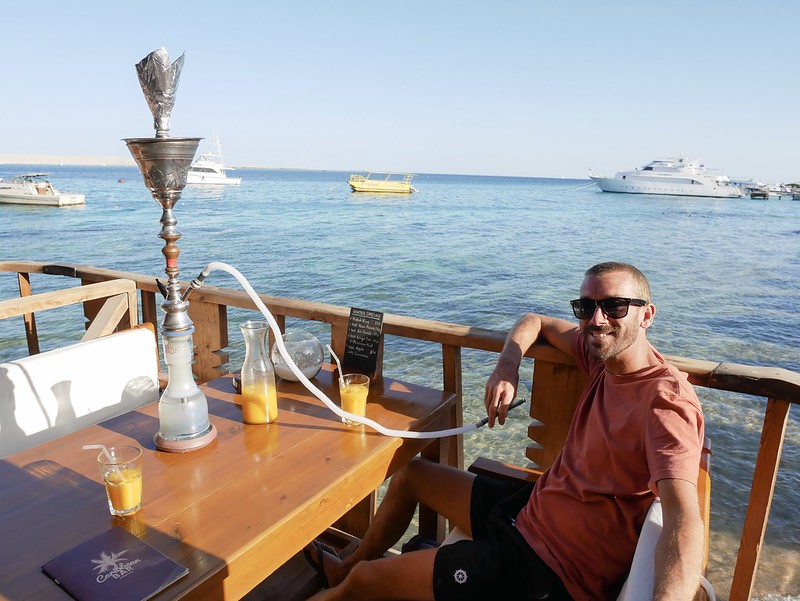 We caught a Uber to the airport and while the driver was pumping out modern music he was blissfully unaware that Craig and I had a cricket in the back that we were frantically trying to flick out the window. As we arrived the driver asked us to pay the entrance fee for cars. Are you kidding me. We’ve paid a set price to the airport, not 1km down the road where the gate is. One last attempt to scam us so I said no we’ve paid on Uber and pointed to my phone to which be said “yes yes review me ok!” and off he went.

Security at the airport was the strictest we’ve ever come across. There were about 4 different checks including a random one right at the end. I didn’t mind, we had time but the staff were rude and totally careless of my fragile camera equipment. As we queued up an old English lady said “this is my fifth time to Egypt and I’m never coming back” to which we replied “we won’t be either” presuming she was referring to the rude people and rubbish situation. But when I mentioned that she looked shocked, no I love the country, it’s the security in this airport that’s ruined it. I’m British, I shouldn’t be getting checked like I’m a criminal. Then she made a snarky comment saying “the women touched me up in the pat down – think she must of been a lesbian!” I gave her such a disgusted look and just stopped all conversation, leaning down and organising bits in my backpack. But she still continued talking as if I was going to reply until eventually she found someone else to bitch to and then she went off again “the female security are lesbians here!” I was furious at her. They were actually doing a good job of security and the old lady doesn’t want to return because she’s homophobic about women just doing their job properly and she thinks because she’s white and privileged she should get through without security checks. Then a fight broke out in the queue with two pikey British families and the staff went ballistic, giving them one warning – or else…they stopped fighting very quickly after that! Oh my, we couldn’t wait to get home. If you couldn’t tell already, we really didn’t enjoy Egypt. In fact it was the 70th country we’ve visited and sadly it was probably the worst which is such a shame as the scenery and incredible historic sights were fascinating – but the relentless hassle from locals and disrespect for their land (throwing rubbish at 4000 year old ancient sites) really ruined the whole experience. We couldn’t wait to be back on clean, British soil. 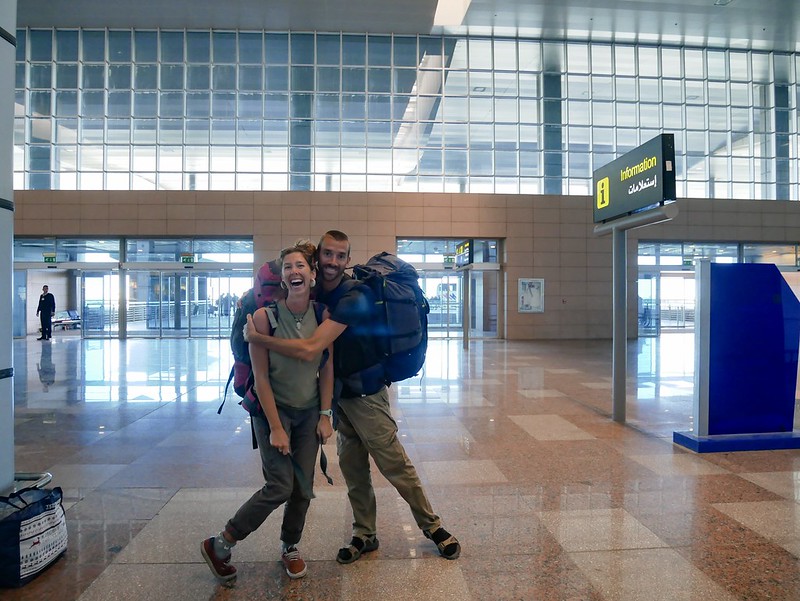