I’ve had my eyes set on visiting the thermal pools of Pamukkale for awhile and finally we were making it happen. A bus took us inland from the Mediterranean coast and I had the joy of sitting in front of a child who relentlessly kicked my chair. Instead of staying in Pamukkale itself we opted to stay in a very cheap hotel a few kilometres north in Karahayit. The room was just £10 a night and the en-suite was connected to a hot spring source so we could run our own thermal bath in the privacy of our room. It wasn’t quite as luxurious as it sounds, the ‘bath’ was a tiled square big enough for two people to sit in. The tiles were stained a rusty orange colour and as the water filled up it began to turn a deep red colour like the aftermath of a shark attack, but we were promised it was just the minerals.

After spending two weeks along the coast which was extremely quiet in the off season, we were so surprised to be in a town buzzing with life. There was a bazaar right outside our hotel, busy with locals and tourists (mainly Asians which was also a big change from the Russian and British visitors by the sea). It wasn’t too busy though, it had a perfect small town vibe. Chubby local ladies sat down while preparing gozleme’s, a Turkish pancake filled with either spinach, cheese or potato and costing less than $1. Pomegranate juice was also readily available along with plenty of kebab shops. We enjoyed a Pide too which is a Turkish pizza, the dough is stretched until it’s a long thin shape almost like a baguette, then it’s covered with toppings and the edge is neatly rolled over like a little pie. For $2 each we got a Pide, salad and drink but the drink was bloody disgusting, a sort of salty yogurt, the thought alone makes me gag. Craig got the classic Pide covered in mince meat and I watched and winced as the chef smothered the raw meat onto the dough with his bare hands and then he made my vegetarian one without rinsing his hands.

To end our feast we got some Turkish ice cream. I don’t know when or why it began but the ice cream sellers in Turkey have turned it into a performance. The ice cream is stickier than the usual stuff and scooped out of a metal vat with a long metal pole. The worker had far too much fun winding me up as he continuously passed me the ice cream and cleverly swapped it for an empty cone or kept spinning it around so I couldn’t grab the damn thing. Craig filmed the whole thing so I can tell you it was exactly 1 minute and 26 seconds of me frantically trying to grab my ice cream off the man.

The village had its own terraced pools with interesting orange edges due to the minerals and the next morning we set out to visit Pamukalle itself. We were awake before many of the bazaar shops had opened and we were amazed to see the shops didn’t lock their products away. Some had just a sheet of fabric draped across their display while others left their entire stalls open for anyone to steal from – but it was obviously a very safe area which was delightful to see. 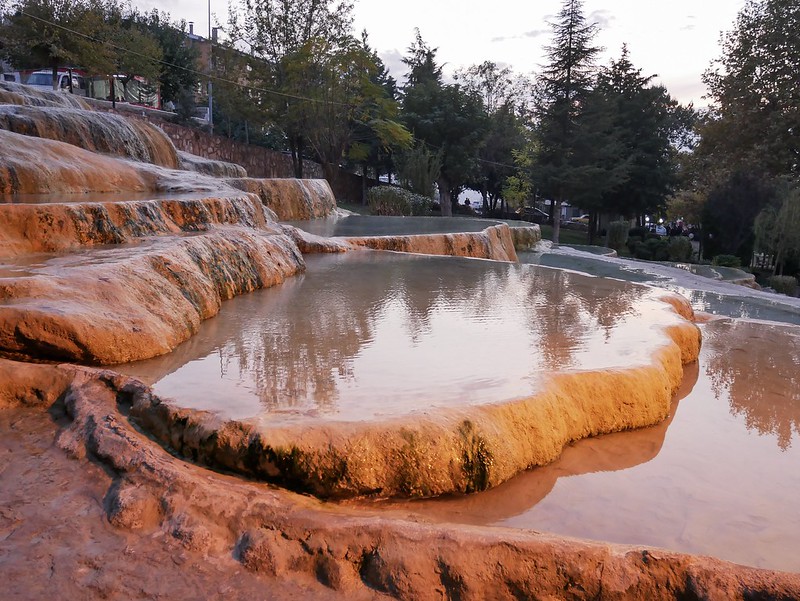 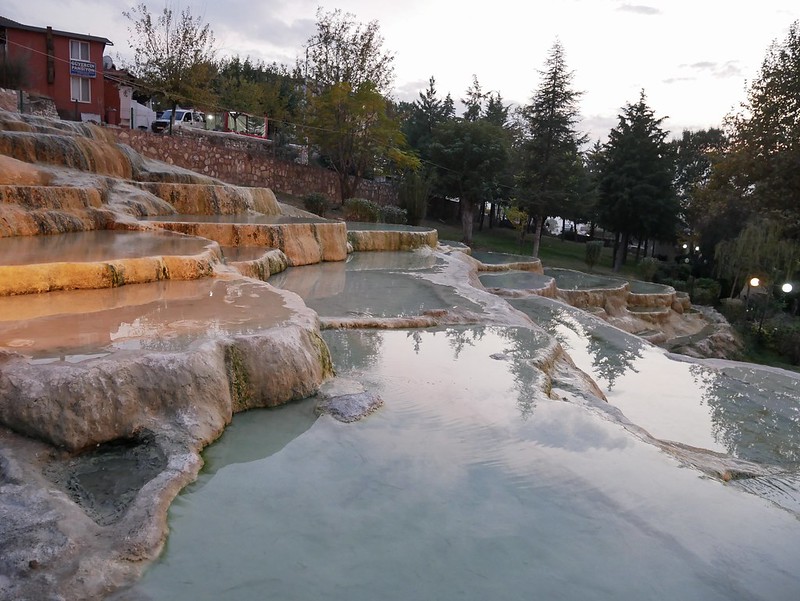 I actually had low expectations for the travertine pools, I’d seen so many amazing photos but after reading recent reviews I found out that a lot of people had a terrible time because the pools were empty!! Apparently the government is limiting the water or only releasing it into certain pools so without the blue water it’s just a white hill. So I prepared myself to be disappointed. Soon after paying the entry ticket we had to remove our shoes as we were walking on the fragile travertine floor. Pamukkale translates to ‘Cotton Castle’ and the pools are formed from calcium-rich springs. The terraces are made of travertine, a sedimentary rock deposited by water from the hot springs

The main walkway led us past manmade pools which were large and filled with shallow water. The water wasn’t hot at all, but the tepid temperature could be nice in hotter weather. It was actually squidgy like a clay under our feet which gave the water a milky opaqueness. White walls rose above the pools, resembling dripping candle wax. It was nice but not wow – that changed however when we got a view to the left where there was a series of tiered pools with aqua water and white shelves. It looked amazing and I couldn’t believe people were complaining about it not looking like the photos or brochures – it was perfect! But it turns out that we were lucky – we spoke to a guy who visited the day before and all the pools were empty, he couldn’t believe my photos! I don’t know if it was because we visited on a Saturday therefore they wanted to make it look good for such a busy day. 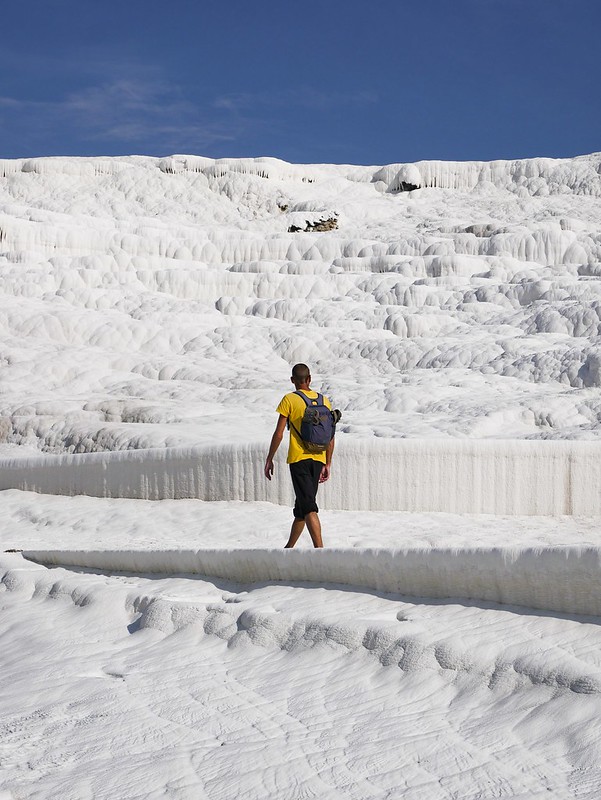 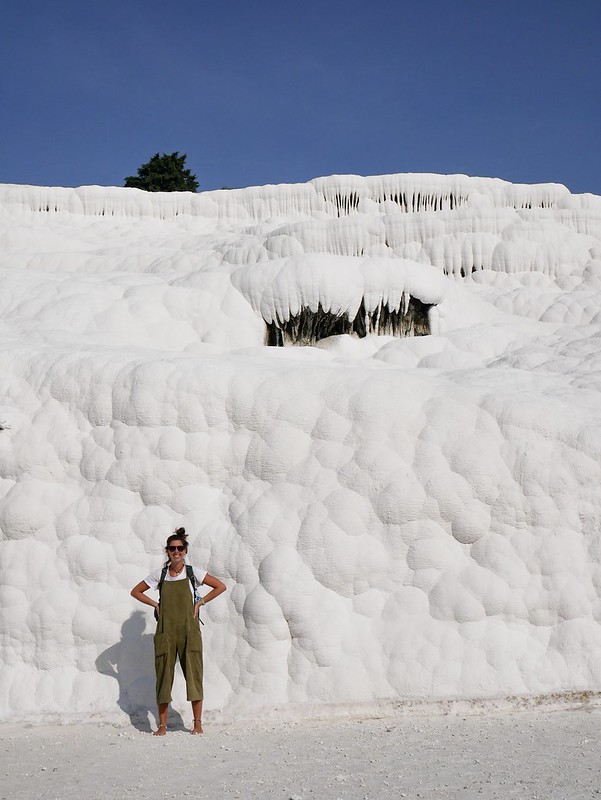 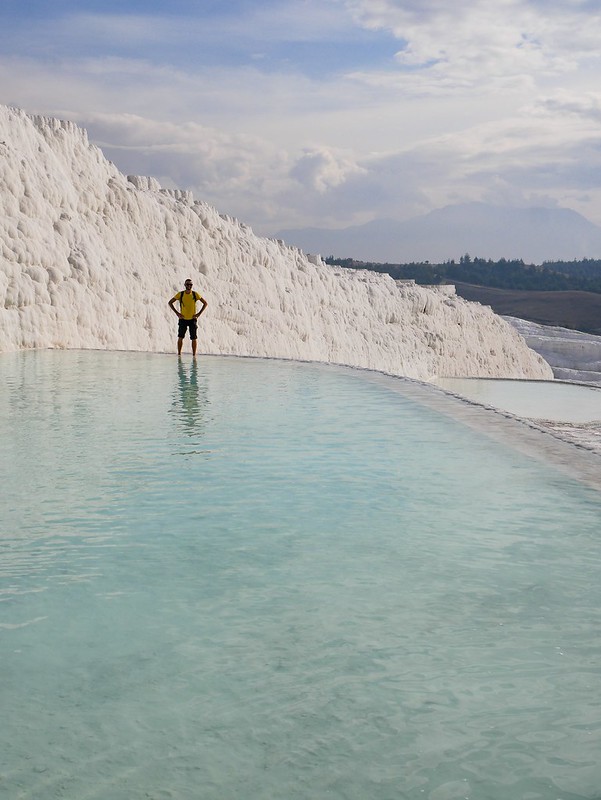 But it was certainly busy, especially at the top area where the best views of the pools were. I actually had to wait to take a photo for a man posing with a tropical parrot. God it infuriates me when they use wildlife to make money. The man was giggling as he was directed by the photographer to lie on the floor with his feet in the air for the parrot to stand on. Poor parrot. 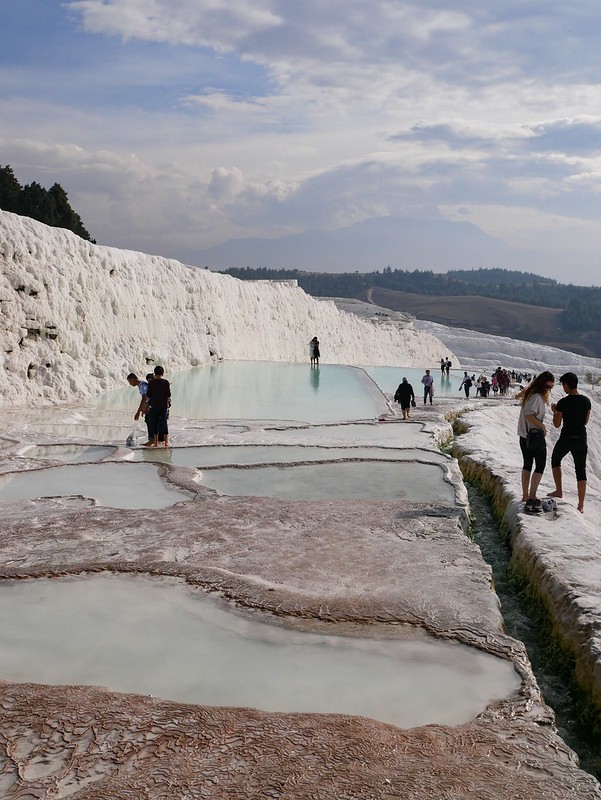 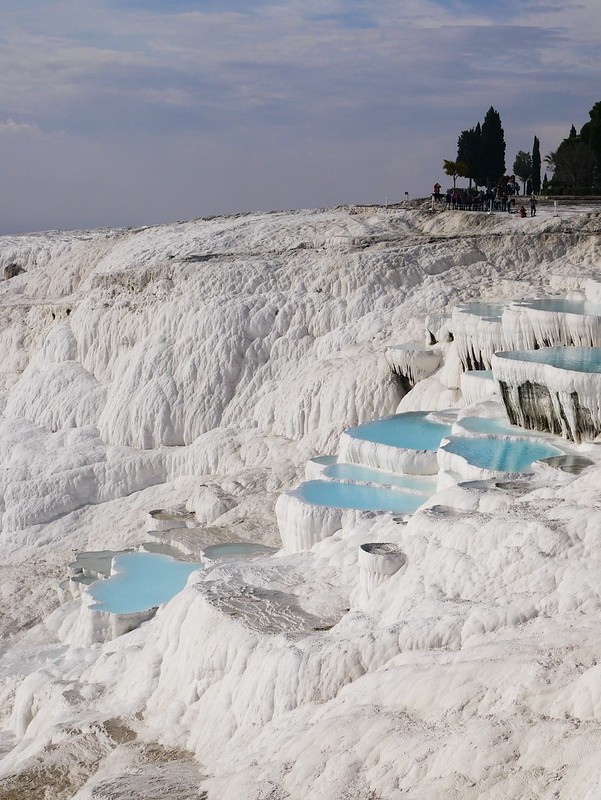 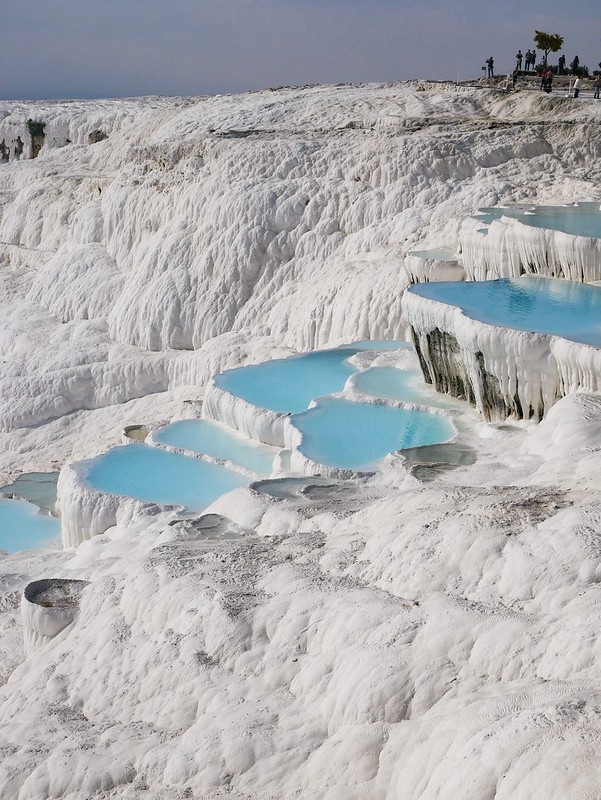 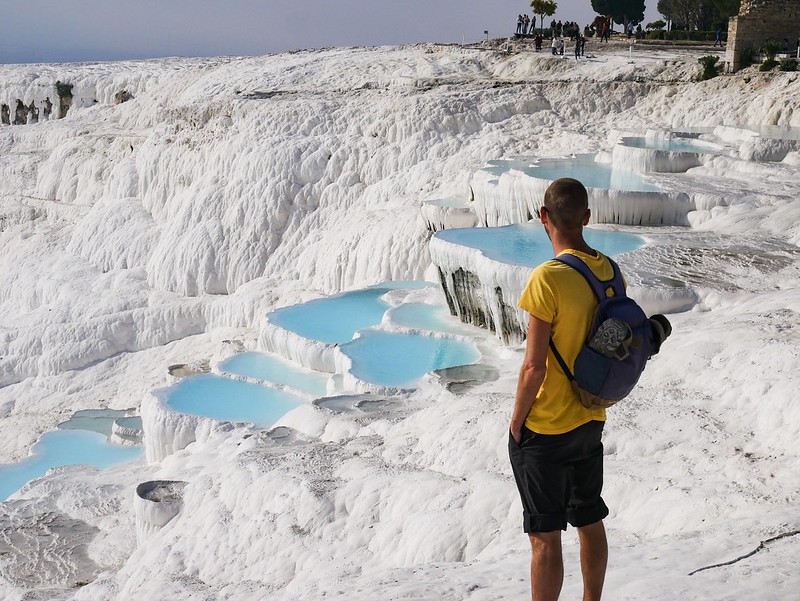 We continued around to the other side to get a different view of the pools. They totally changed colour as the sun dipped behind clouds, going from a deep blue to a very pastel colour. It was a little tricky to get a nice photo of us and the pools as a chain fence was in the photo but it didn’t matter to us. Sadly, it did matter to many people who decided to break the rules and climb over the fence. Not only did they step onto the delicate travertines with shoes on but they did so in an area where they weren’t allowed – but they literally didn’t care because apparently getting that perfect Instagram photo was more important. There was one particular couple who took it in turns to carry a leather bag and snap dozens of posey photos as if they were promoting the bag. The girl was wearing a tiny crochet bikini top – in Turkey, a Muslim country and the guy was constantly tensing his muscles to show his six pack. The modern world is really starting to grate on me – vanity has taken a new level of craziness. 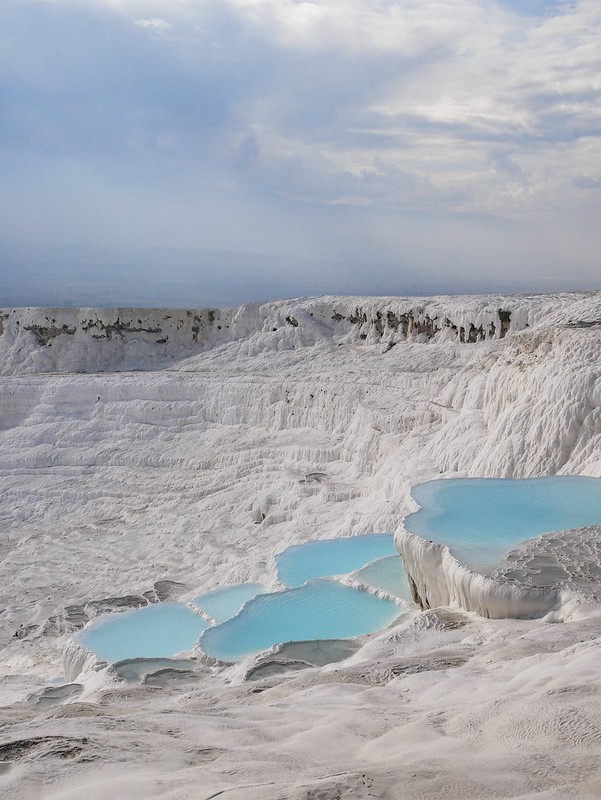 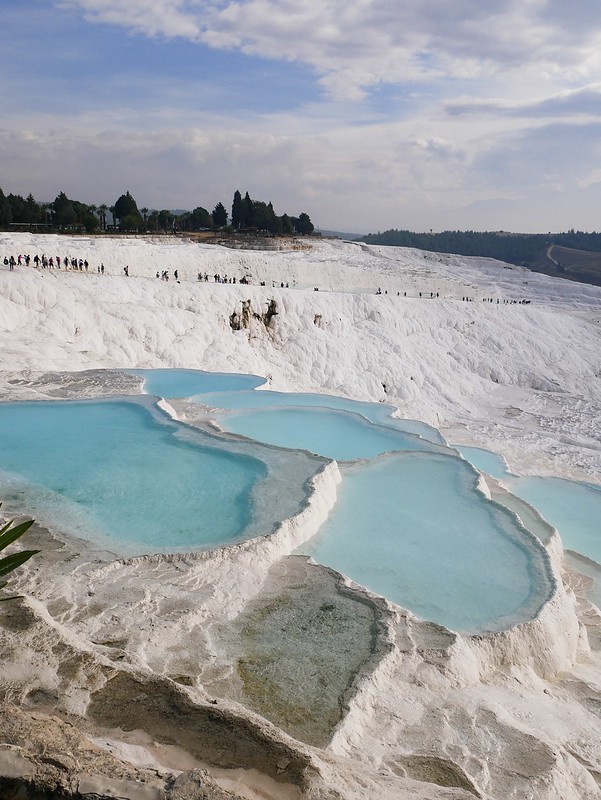 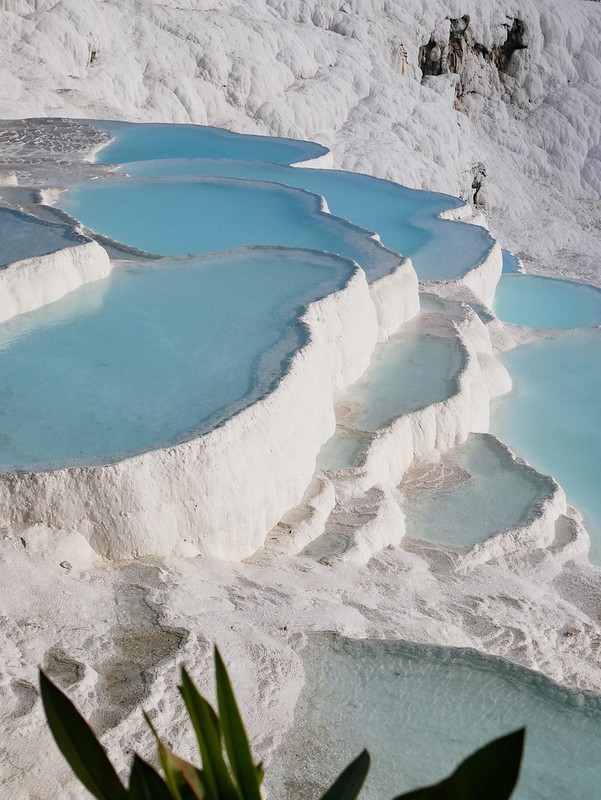 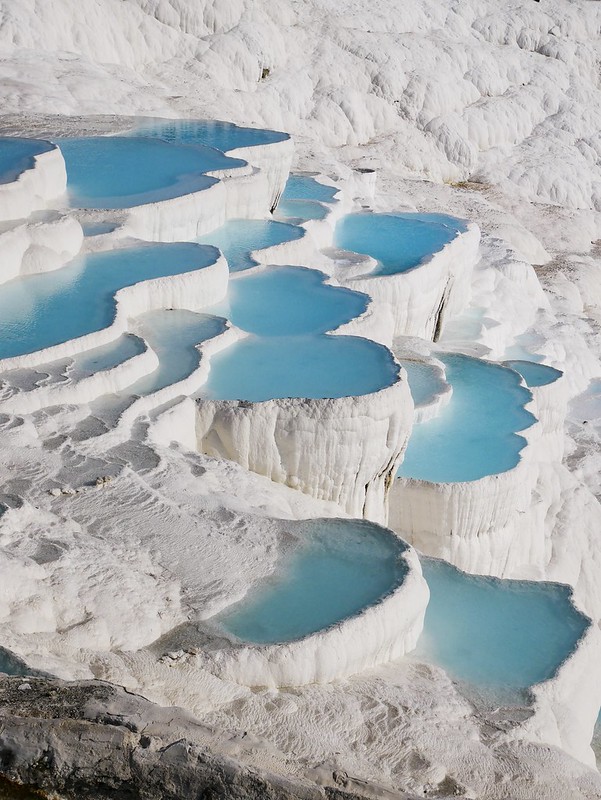 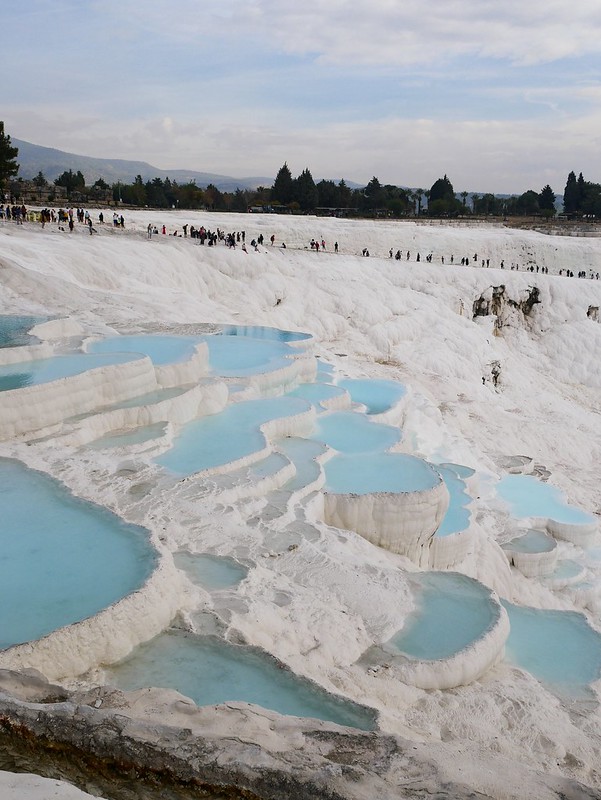 Trails continued around the cotton castle where hundreds of pools laid empty of water – they certainly don’t look very aesthetically pleasing without the milky blue water trickling over the edges. We watched a local family step onto a no entry area, while wearing shoes, to pose for a photo. I was pretty happy to see a security guard tell them to get off, but they completely ignored him and he didn’t seem to be authoritative at all and just stood and watched them. 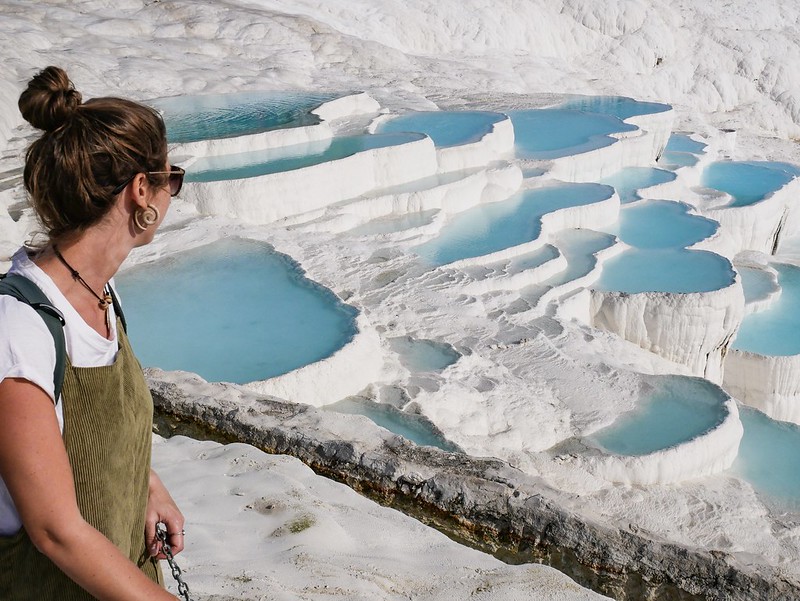 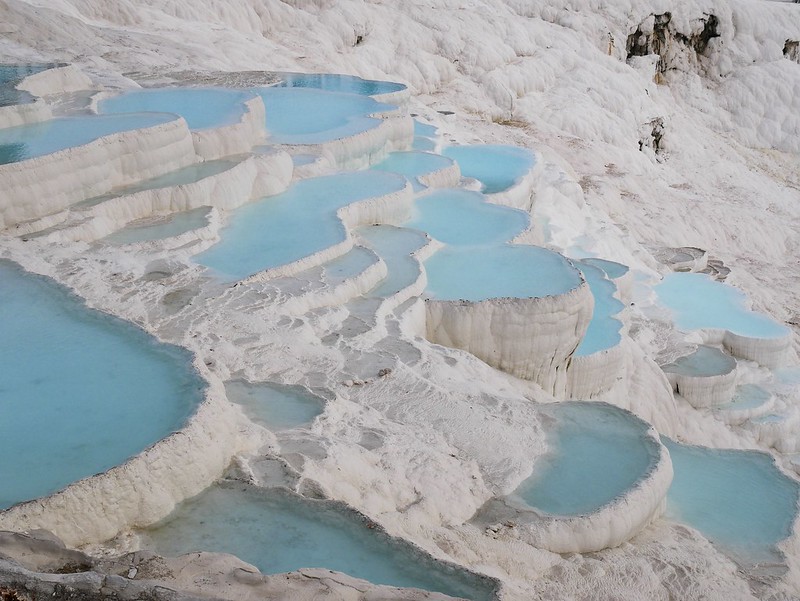 Above the sprawling white hill was Hierapolis, an ancient Roman spa city founded around 190 BC. Cleopatras pool, where the pharaoh supposedly swam, was busy with tourists taking a dip. The water was crystal clear so the old pillars and structures that had collapsed during earthquakes were visible beneath the surface. There was a huge amphitheater which had a very impressive back stage with intricate statues but as we sat on the steps it began drizzling with rain. We decided to head off and exit via the western side where there were arches and what looked like an ancient latrine. The arches were quite baffling, how the stone blocks were cut so precisely, lifted up and somehow placed in a way to create a huge arch that withstood time. We didn’t spend too long in the ancient city as we were more interested in the pools, but it was a pleasant day out nonetheless and I’m happy we made the effort to visit this area of Turkey. 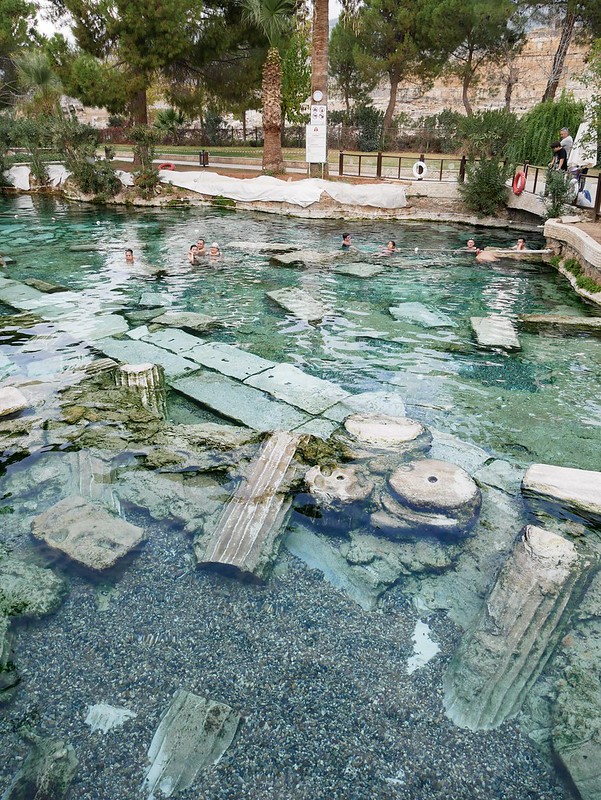 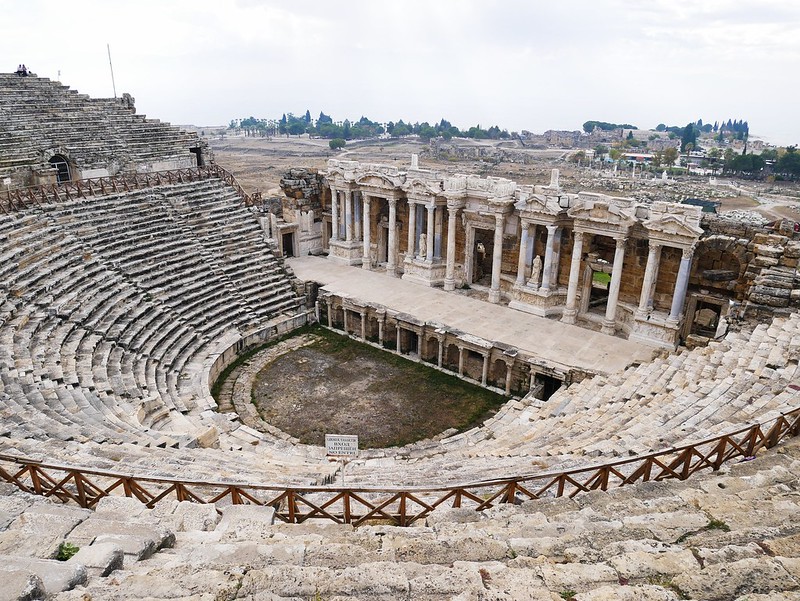 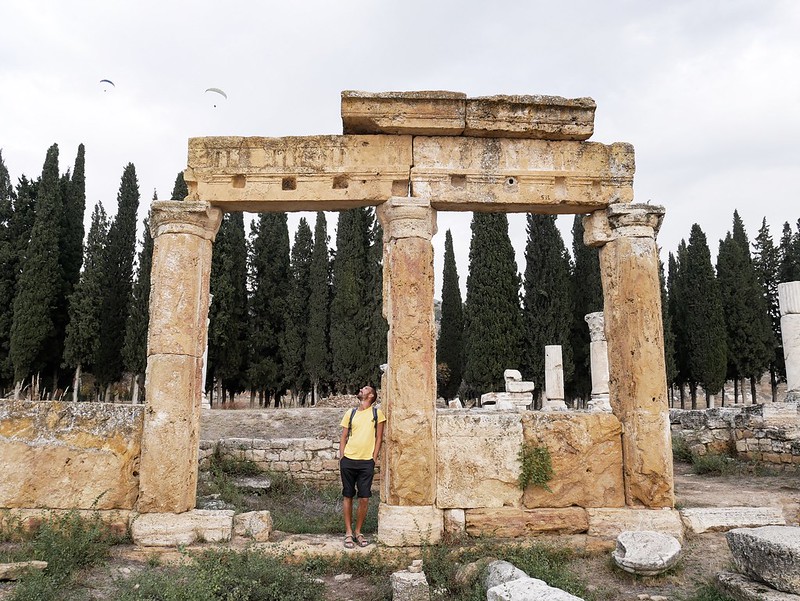 Also as testament to Craig’s terrible memory, it turns out he visited this area on a family holiday. He claimed it was when he was 17 but his dad informed us he was infact 24. He can barely remember anything from the holiday so it was very funny finding out he’d also stayed in Fethiye, swam at Ölüdeniz beach, paraglided off the same mountain, hiked through the Saklikent Gorge and visited the Pamukkale pools. The only part he seems to remember from the holiday was heading out on his own, getting way too drunk and a Turkish policemen delivering him home to his parents! 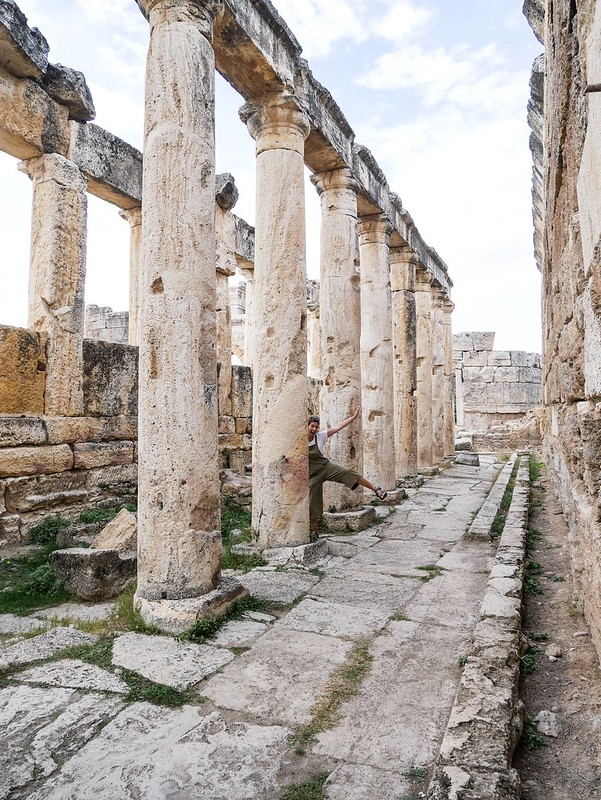 You only really need one day to visit the pools so the following day we caught a night bus to Cappadocia, a place I’d been longing to visit. Before we left we purchased some raisins from a mans stall. It was only as we walked by later in the evening and saw his shop was ‘closed’ that we realised he also left all of his produce out in the open. The raisins were just covered in a sheet with some bricks across them…therefore mice or rats could easily have a field day at night. That was almost enough to put me off eating any, but the tipping point was when we sat in silence and heard our bag of raisins rustling. We opened it up and saw a fruit fly who happily escaped, a long black hair, but no mouse as we’d feared. The crazy thing was the raisins were the things making the noise, they were moving around like jumping beans so we threw them straight away. Good riddance! Our night bus wasn’t very pleasant with many snorers and farters on board. Plus we had to stop at so many police check points that we could barely get a wink sleep, the things we do for a free night accommodation ay.