It was time for us to cross from Chile into Argentina to see the other side of Patagonia. The border crossing was certainly the windiest we’ve ever experienced with dust storms and frantically flapping flags (bit of a tongue twister!). We eventually arrived in the town of El Calafate where we had a two kilometre walk with our heavy backpacks to reach our hostel. The wind gusted along the dirt roads, surrounded us in a layer of sand as we covered our eyes and blindly walked along. The town was full of stray dogs (which seem to be very cared for by locals in both Chile and Argentina). They liked walking with people so by the time we reached our hostel we looked like a couple of professional dog walkers with half a dozen dogs following us.

We came to El Calafate to visit Perito Moreno Glacier which was about an hours bus ride from the town. It’s one of the few glaciers in the world that is actually growing as appose to the majority which are receeding. The glaciers face ended in a milky lake where a little bay was full of small icebergs that looked like crushed ice in a cocktail.

The glacier was a whopper at 30km in length, 5km wide and 60m high and rumour has it that it’s actually advancing 2 meters every day!! The middle section of the glacier had made contact with the land and huge chunks had broken off from the impact. Apparently every 5 years the glacier blocks the path of a river and over time that river makes its way under the glacier and shapes the ice into an arch. Carvings take place at the weakness until there’s a massive ‘rupture’ when the arch collapses in a dramatic manner. 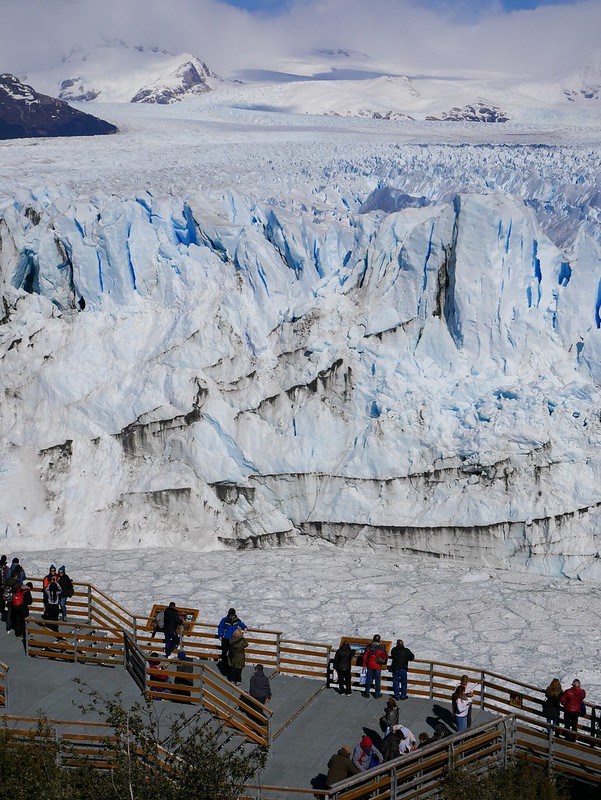 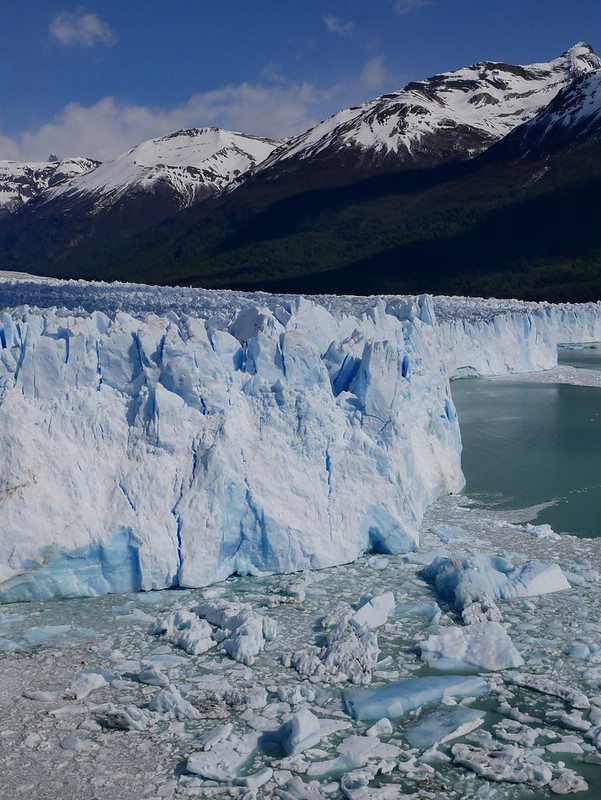 Metal boardwalks led us on a parallel path to the glacier, providing numerous vantage points so we could admire the incredible glacier. We’ve seen a lot of glaciers during our travels but I have to say that this one was the second most impressive for us (after the one near Valdez, Alaska where we watched a huge carving and the sea was full of giant icebergs). 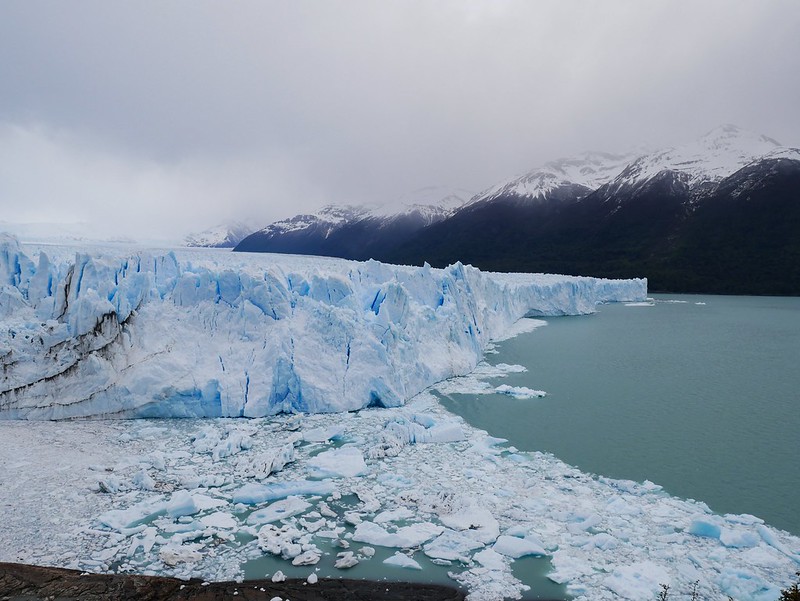 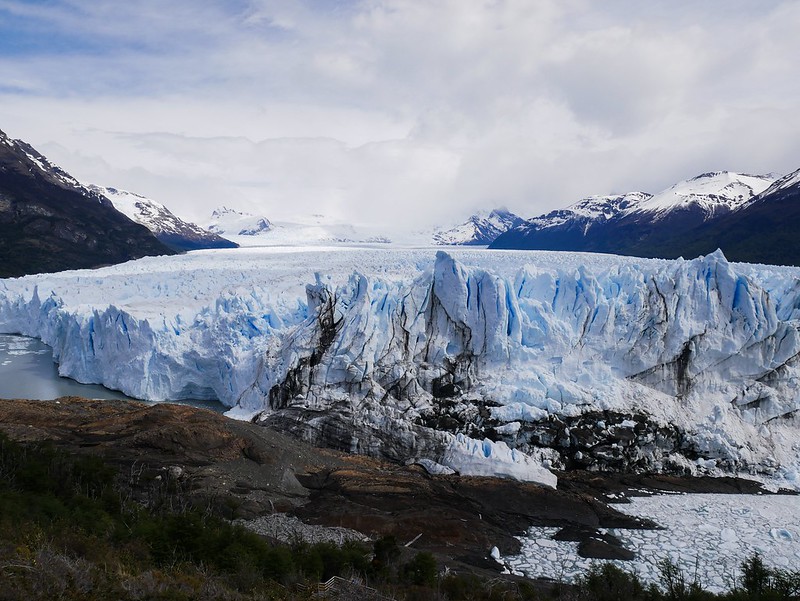 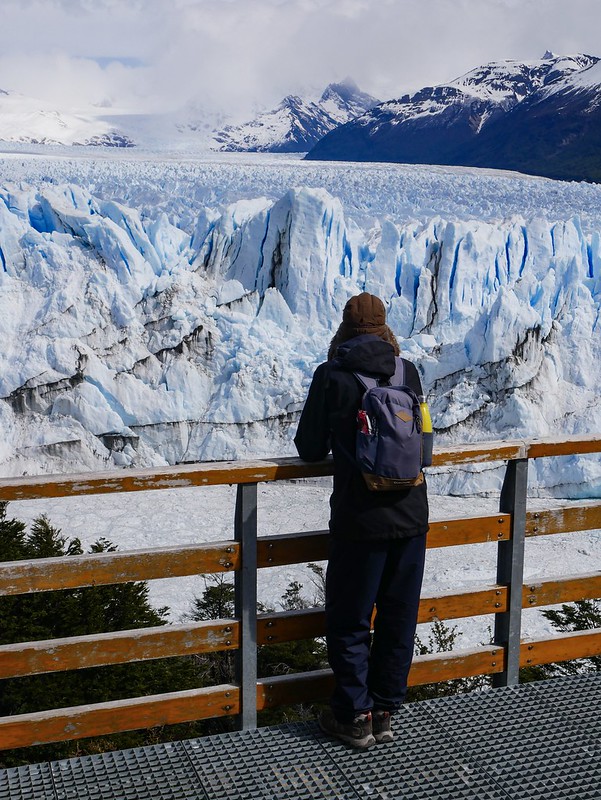 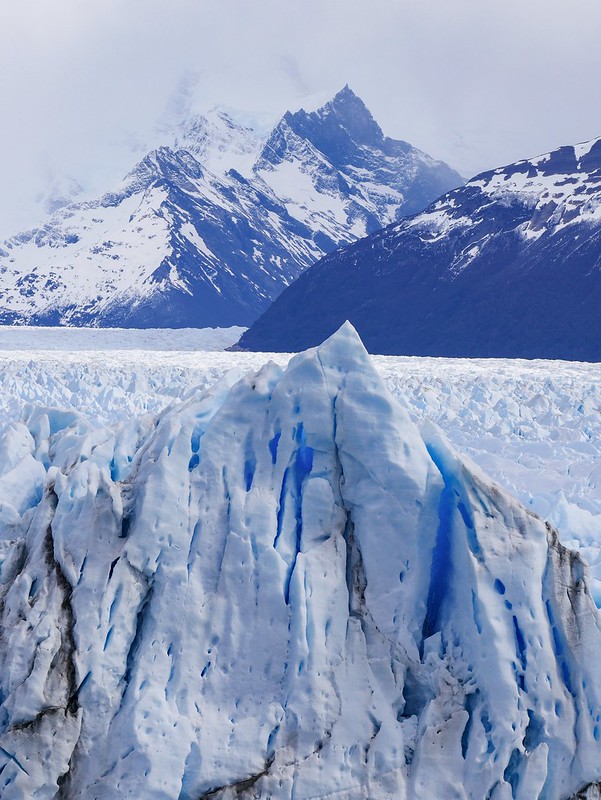 The viewpoints were unbelievably close to the face of the glacier and as soon as we got to the closest point we heard a big bang as a slab fell from the lower part of the wall, revealing an aqua-blue section. We were most excited about watching the glacier carve, where slabs of ice break off so we stayed put for a few hours awaiting a big collapse, maybe a little optimistic of us. A few small crumbles happened nearby but the bigger carvings were on the far left or right of the glacier, quite far away from the viewing area. 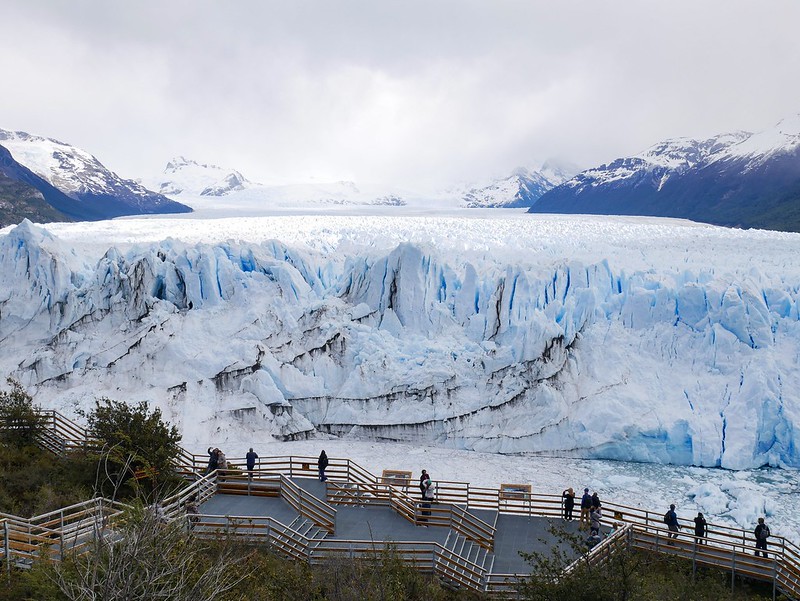 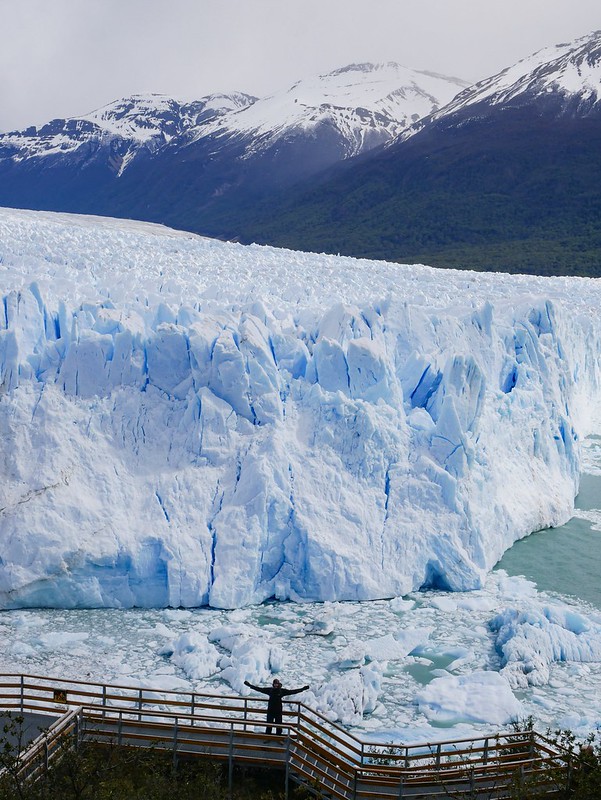 We eventually took a stroll along all of the boardwalks to take in some different views. A couple of massive condors who’s wingspan stretches two meters, flew overhead and then glided between us and the glacier before heading to their nest. Then a beautiful Caracara bird which is the second largest falcon in the world landed directly in front of me on the fence. It was a beautiful bird but it sure had some confidence, I guess ignorant humans had been feeding him and he was now a very brave and ballsy bird! 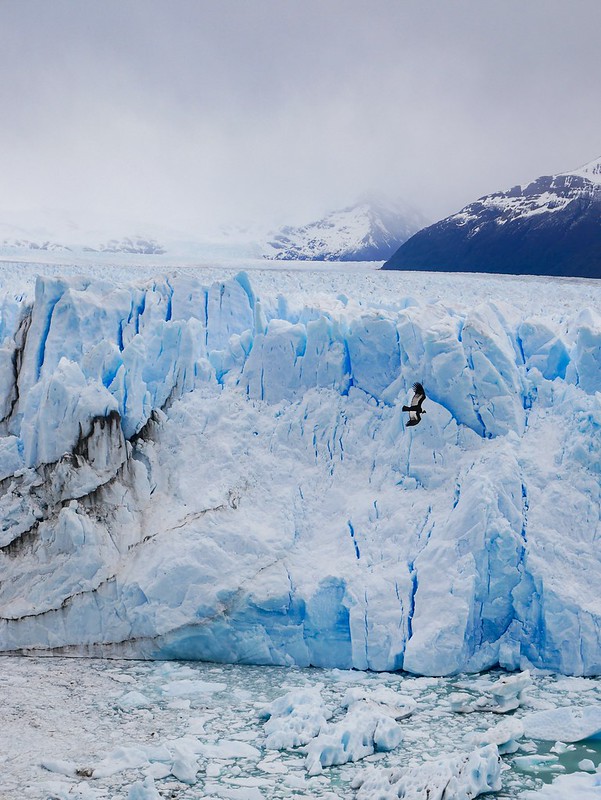 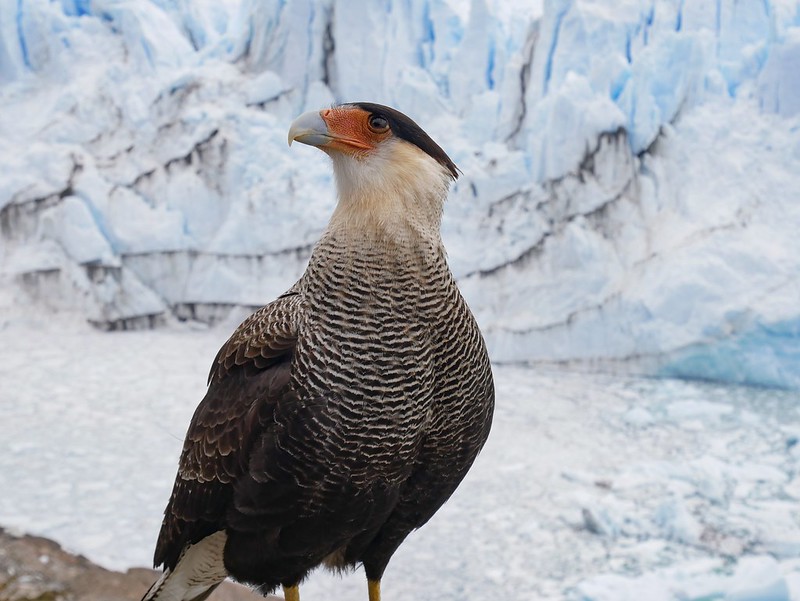 The wind picked up in the late afternoon so we were happy to hop back on the bus after five hours and head back to town. 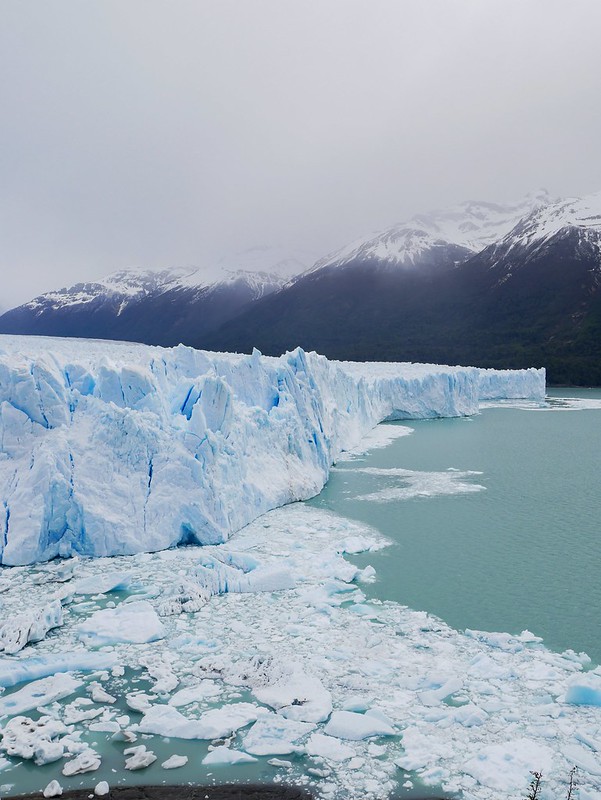 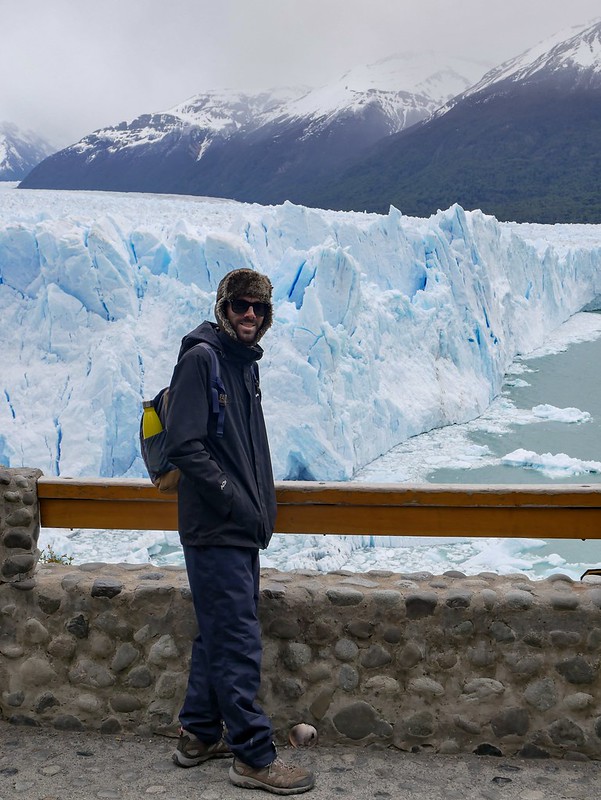