I stuck my middle finger up at the stressful traffic of Vancouver city as we zoomed onto a ferry bound for Vancouver Island. We were heading to the port near Victoria, the islands capital but we took a wide berth around it, not interested in cities we wanted to head straight for the natural spots. We didn’t have much of a plan but we stopped for a picnic at a national historic sight which had a pretty lighthouse and a strong ocean smell that I can never decide if I love or hate. Across the sea from us was the USA and the snowy peaks on the Olympic peninsular. 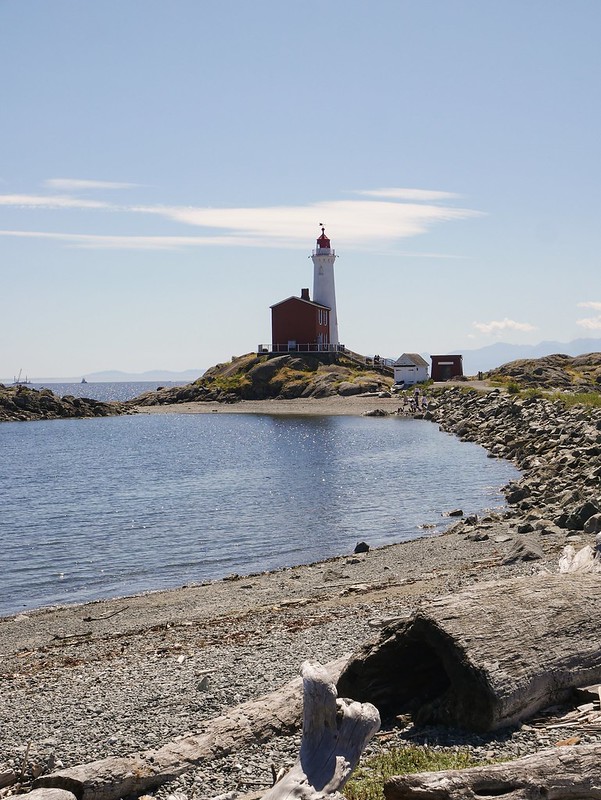 We took some winding roads, not really sure where they led to but enjoying the countryside along the way. The route was really hilly and passed through coastal villages and forests filled with moss covered trees. Eventually we joined up with the main road and headed to Sooke Potholes Provincial Park for a dip. It’s a very scenic river that’s carved a small gorge with potholes dropping down into one another via waterfalls. The lower area had wide open pools with gravely beaches while the top section narrowed into the gorge with cliffs and rocks to jump from. It was the upper pools that we wanted to get to but our trail came to a dead end at an overlook. There were a couple of people exploring the nooks below but we couldn’t work out how they got there, so they must have walked through a closed off area or gradually climbed their way up the cliffs. We managed to find a route down to the next level of pools which involved wading through the creek to get to some giant rock-jumping boulders. The water was clear and warm but in the late afternoon sun it looks eerily dark and spooky so it took me awhile to pluck up the courage to cannonball into the water. We jumped in similar pools in Australia and I remember feeling like I was underwater for way too long so I opened my eyes and just saw dark green water, I think I was scared to kick my legs incase I touched a monster but it meant I took ages to reach the surface. While I felt pretty brave jumping maximum 2 meters into the pools, a tall lad came along and before he reached our rock he just leaped off the edge, dropping about 10 meters like it was no big deal. 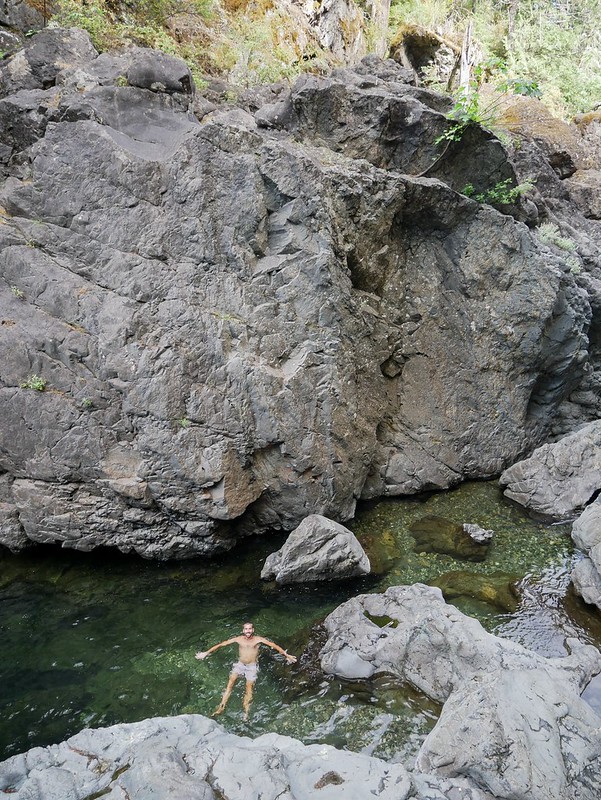 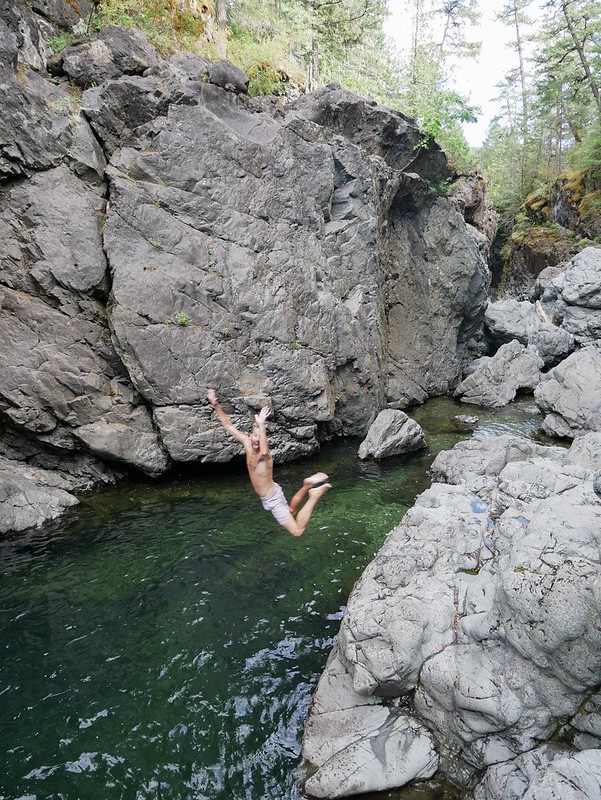 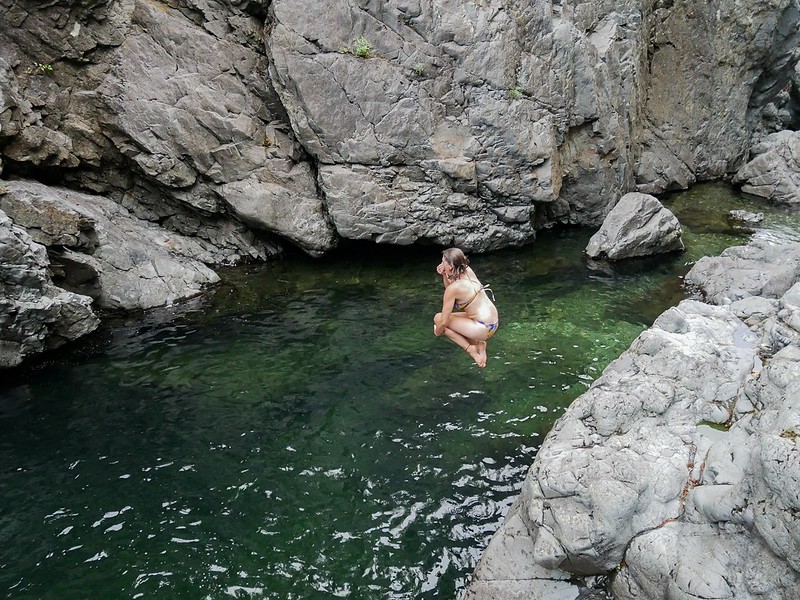 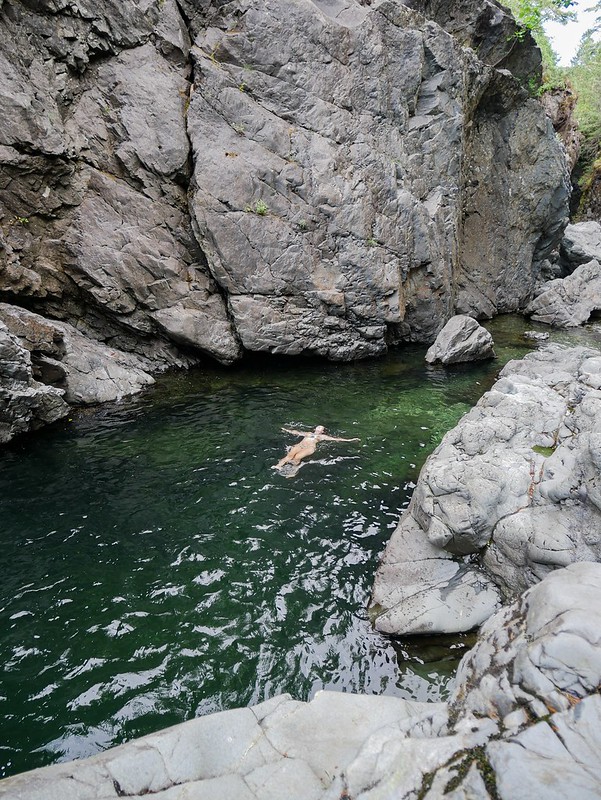 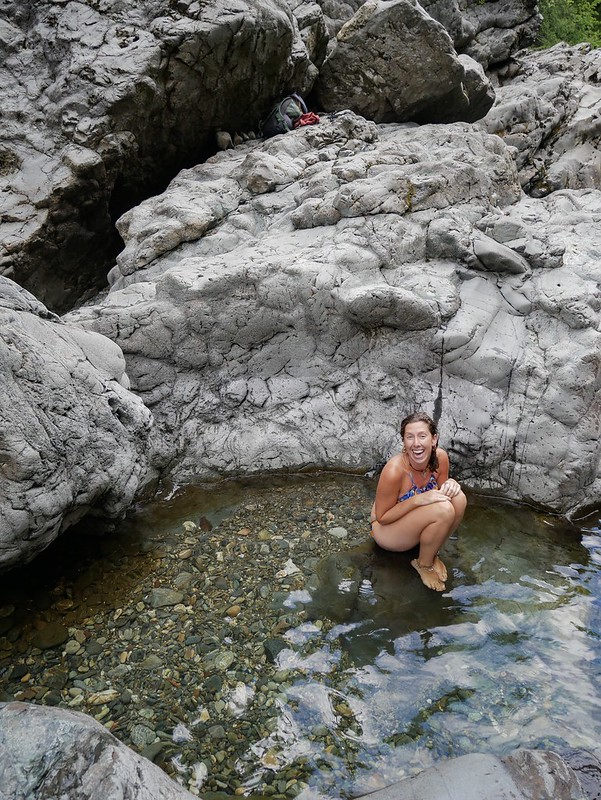 As we left the area I spotted something strange in someones garden, it wasn’t a dog like I first presumed but actually a black bear and her two cubs. They were on a well manicured lawn, casually eating apples that had fallen from the tree. It was a shame that they’d found a human source of food as they will probably be euthanised if they continue to live near humans. The cubs laid on the ground, holding the bruised apples between their adorable paws while mama bear stood up tall, reaching for more from the branches. We ended the day having dinner in a car park by a spit. The sea was all around us and we watched seals bobbing their heads up while we ate dinner. 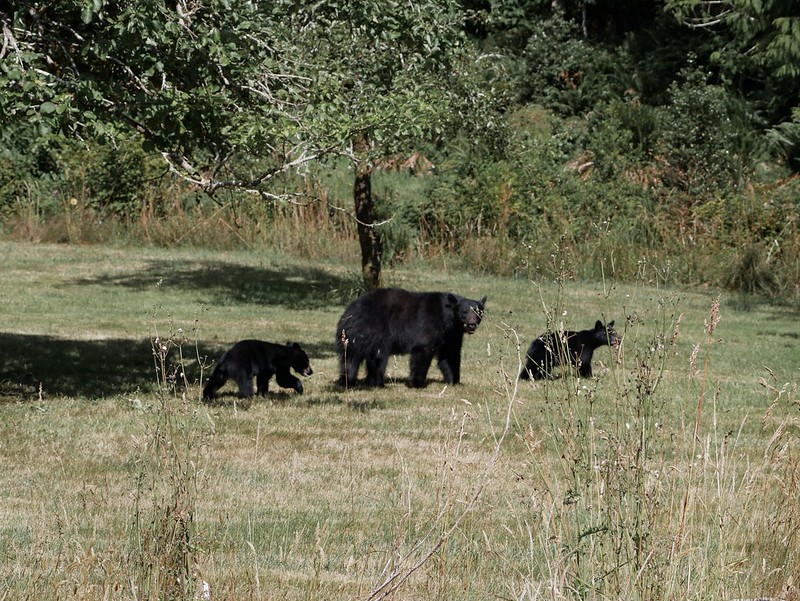 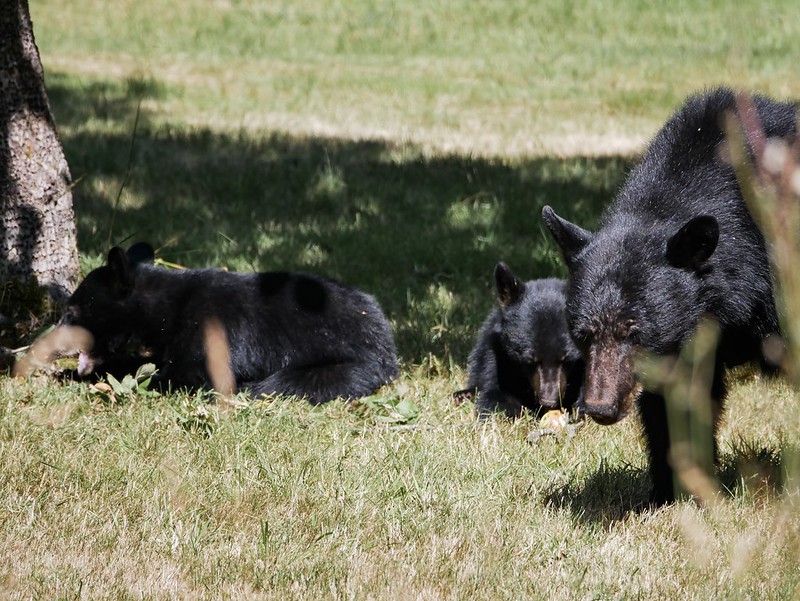 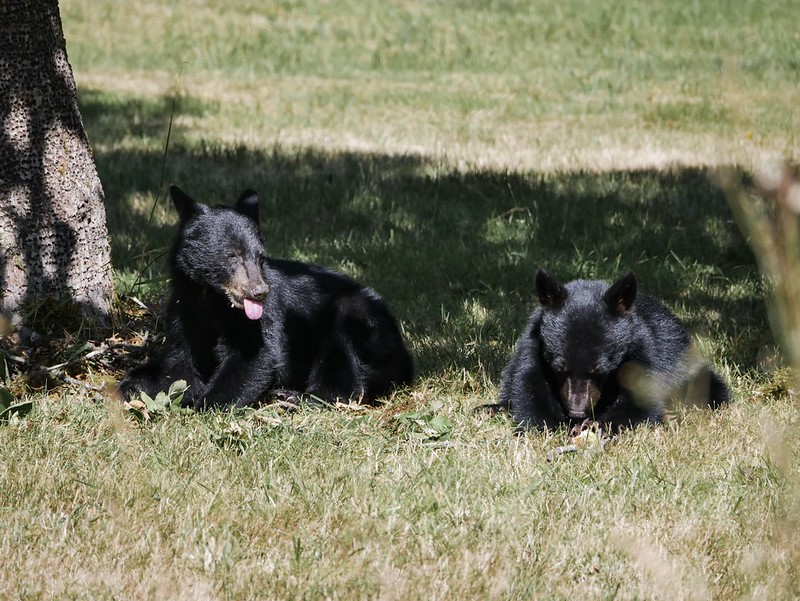 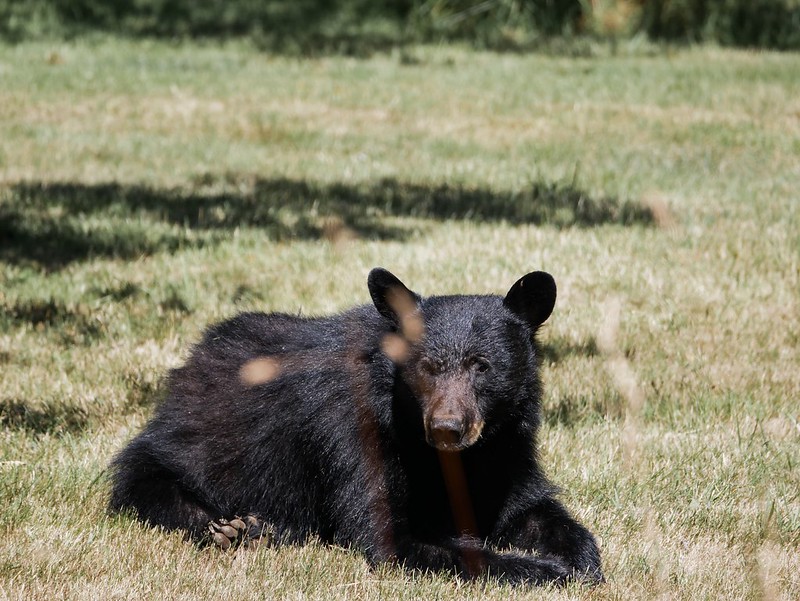 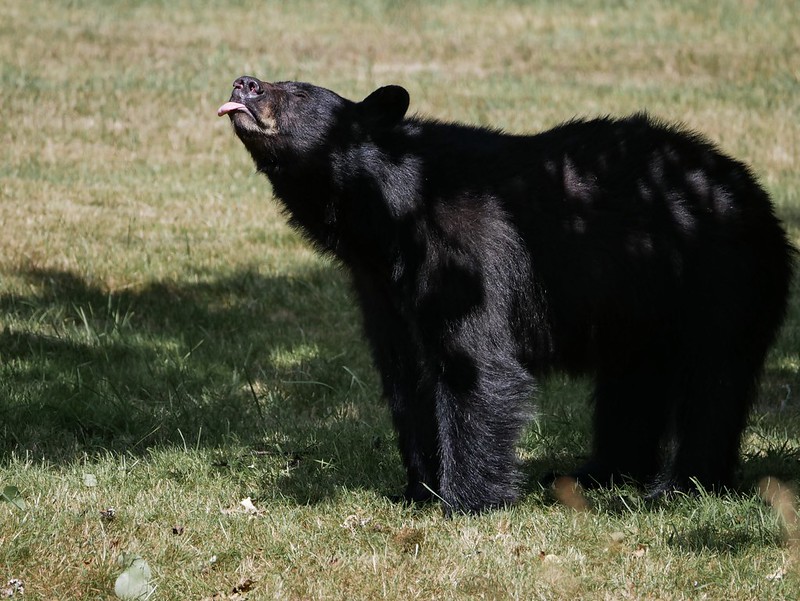 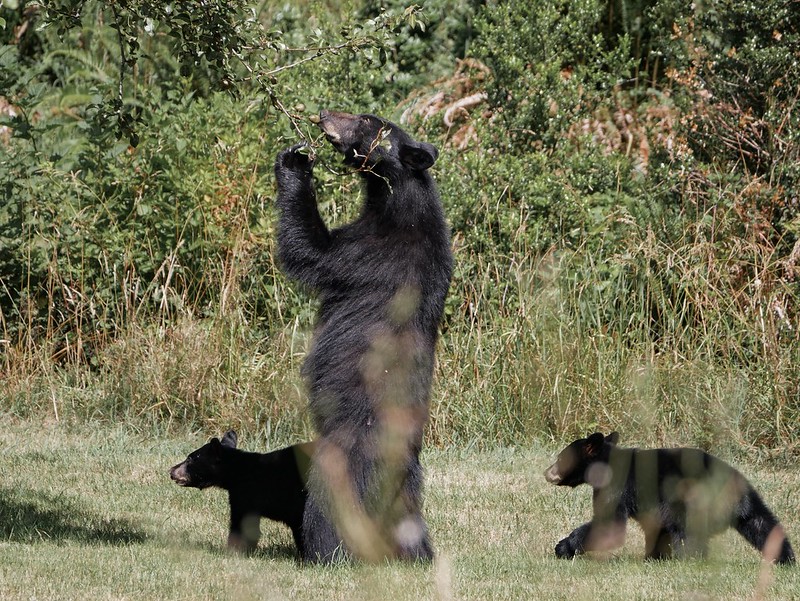 The next day we continued driving along the southern coastline, stopping for walks along the way. It was a foggy start and the sun pierced through the fog and created the most incredible sunbeams through the forest. The ground was covered in ferns and the air felt moist, like a proper rainforest but without any wildlife. We ended up at a beach but it wasn’t an idyllic spot due to the many tents scattered along the sand. 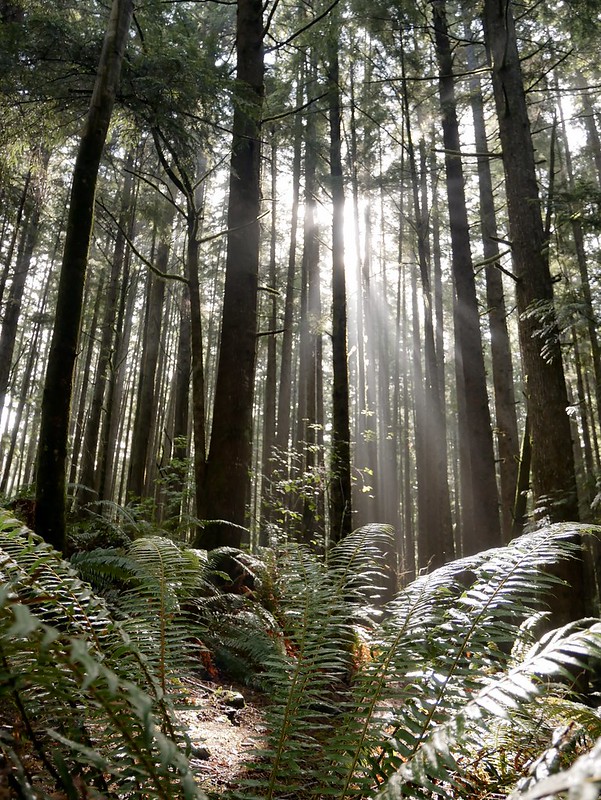 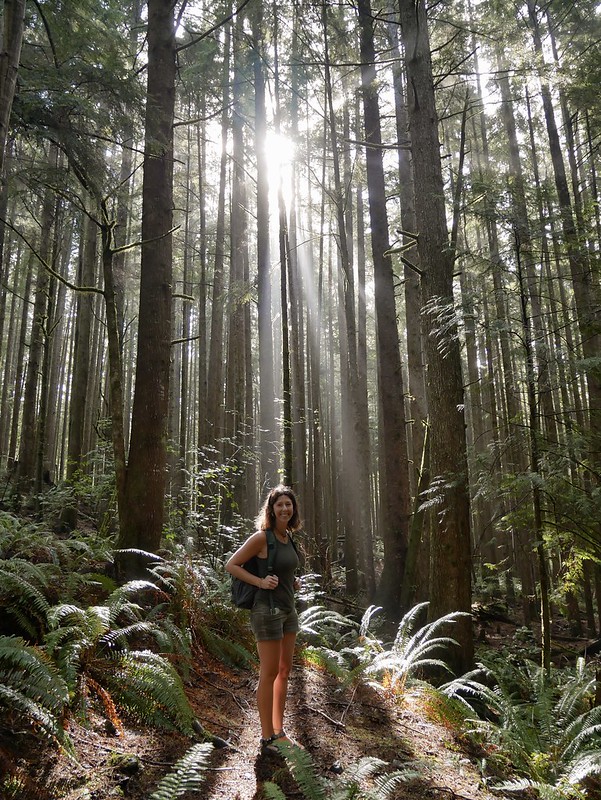 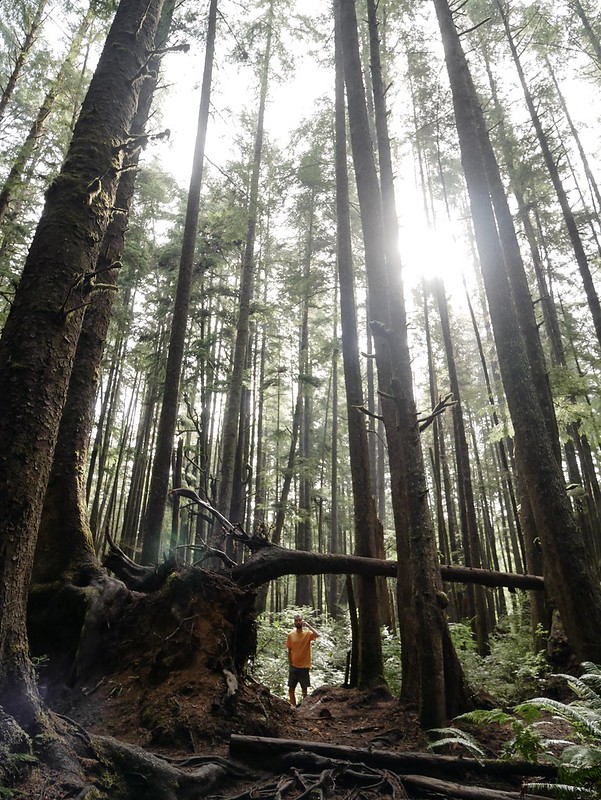 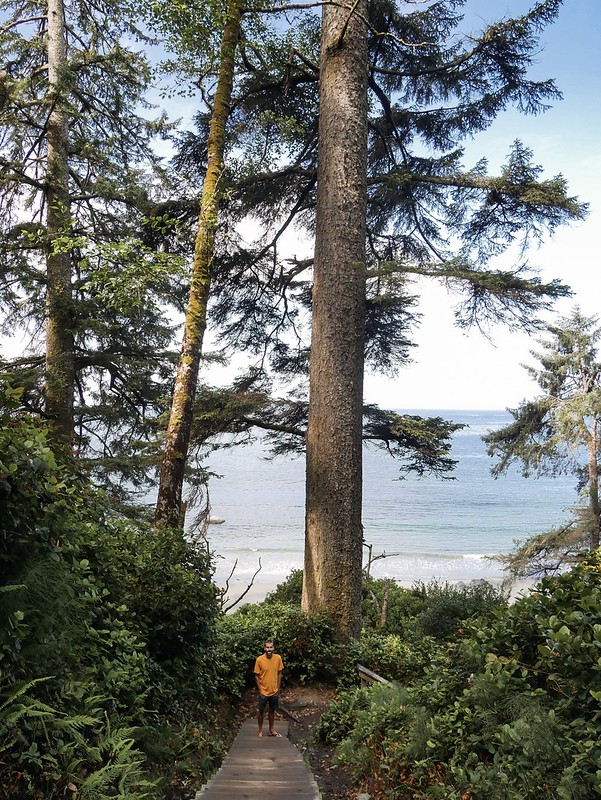 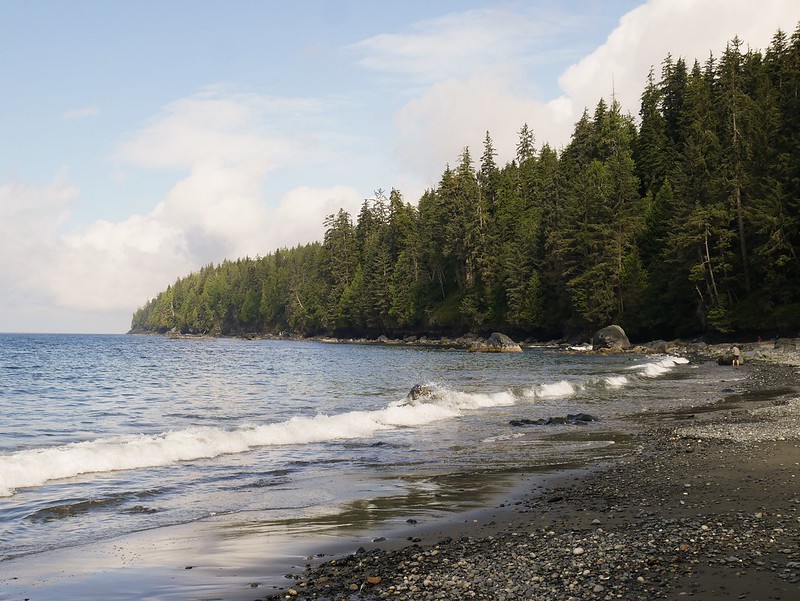 Further up the road was Port Renfrew where we did another coastal trail, exploring the rock pools and watching waves crash against the rocks. It was nice but we quickly realised (on day two on the island) that all the walks would be the same. It was just rainforest, beaches and hills which of course are lovely but it doesn’t spur me on to explore and go on long hikes and I feel it’s not so rewarding if the scenery doesn’t change. 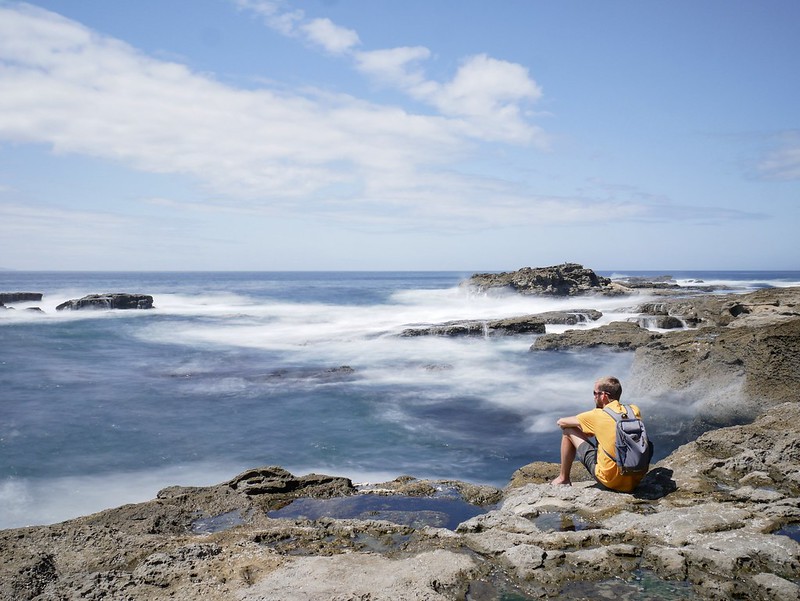 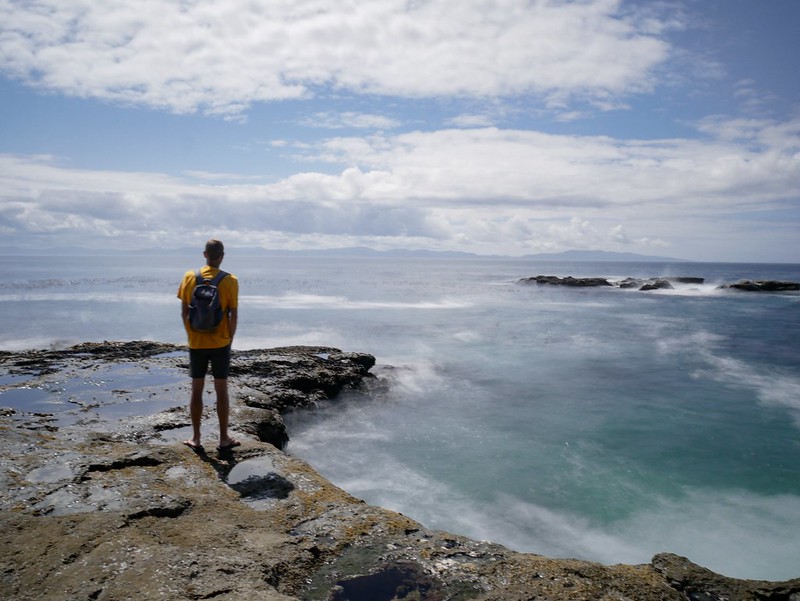 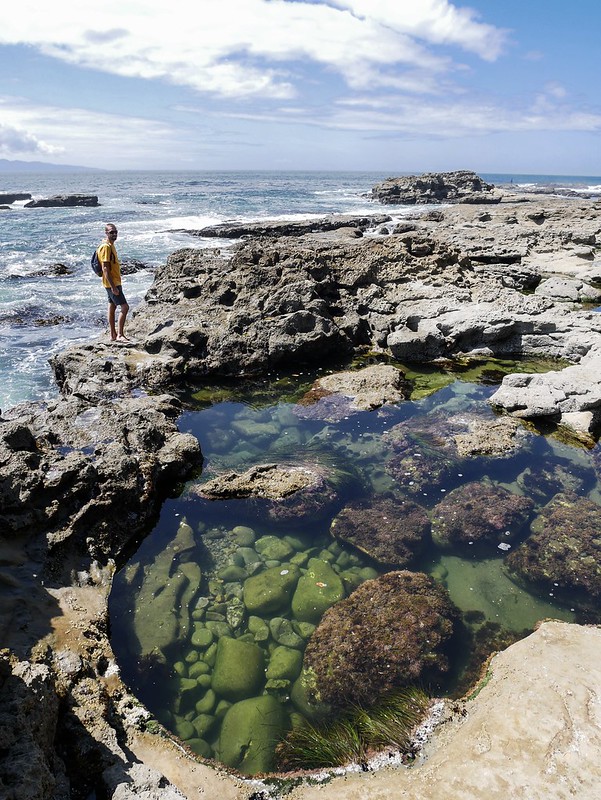 The weather was great though and as we headed east from Port Renfrew we passed lots of crystal clear streams and pleasant lakes for swimming. The water was so warm, we couldn’t believe it after all the glacial mountain lakes, so we spent a whole day just relaxing in the sunshine and then finding a quiet logging road to camp at for the evening.

The lake area had a rustic campground with warning signs about a cougar in the area. We had no idea but the island is cougar country, even still our chances of seeing one is very unlikely as they are so elusive. Interestingly a lady had two cougar tracking dogs at the beach we were relaxing at. They were gorgeous with auburn coloured fur and big dangly ears. They had gps devices and antennas around their necks incase the owner lost them, and apparently when they find a cougar in a tree they just bark constantly to notify the owner. But I didn’t understand why they were tracking them, they didn’t seem to be hunting them and I would expect that to be illegal anyway so it seemed like a strange hobby. 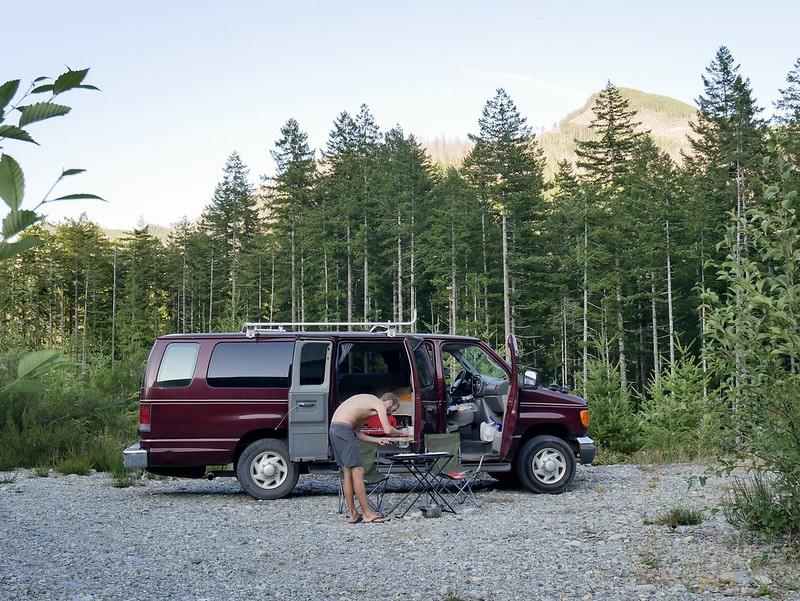 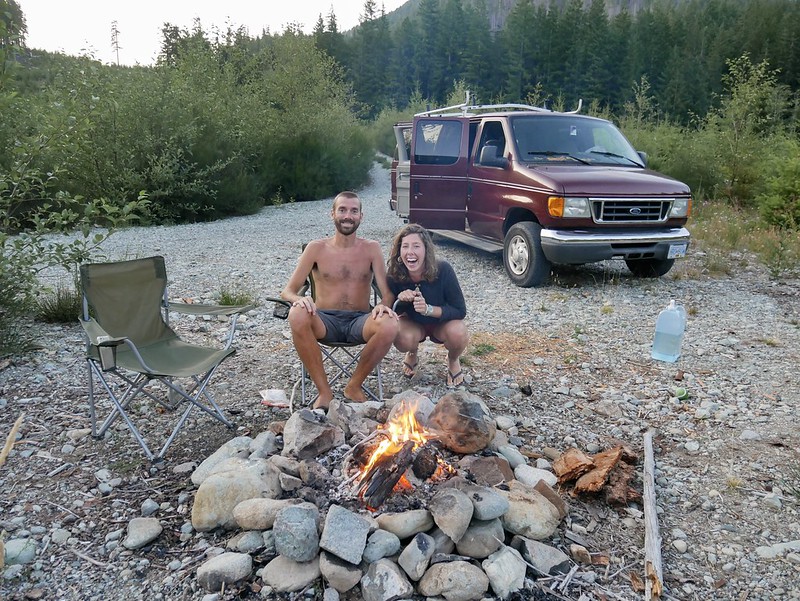 The road led us to the hub of Cowichan Lake, whose lake wasn’t actually anything special but we hadn’t taken our boat out in awhile so that’s what we planned to do. Just before we set off we heard about a float trip down the Cowichan River, we could put our boat in at the start of the river and drift down for three hours where a $5 shuttle service would take us back to the carpark. Most people rented tubes but there were also people using any floating device from huge circle tubes big enough for four adults to lounge and sip beer, to animal shaped lilo’s and even airbeds. 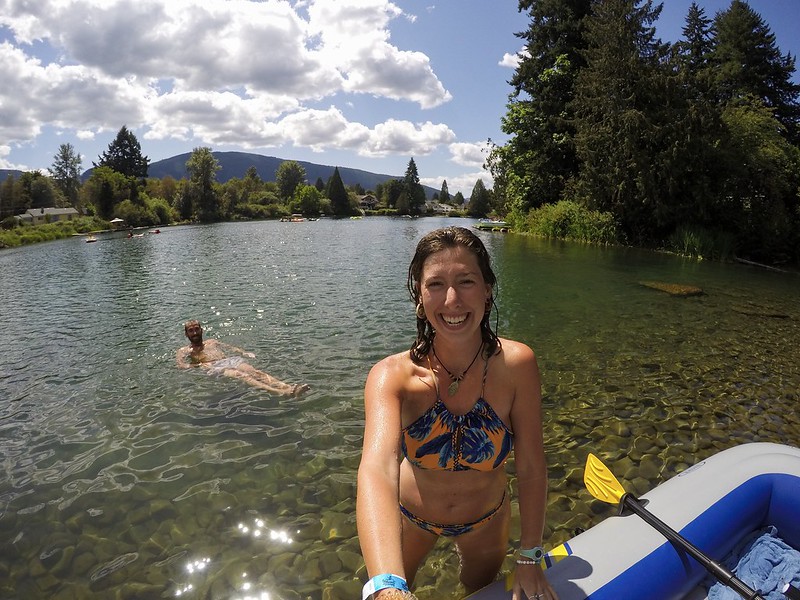 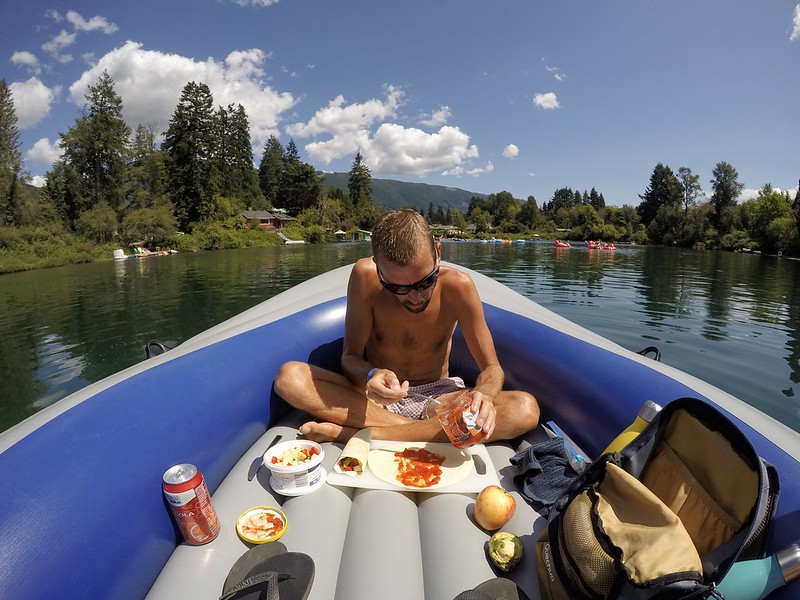 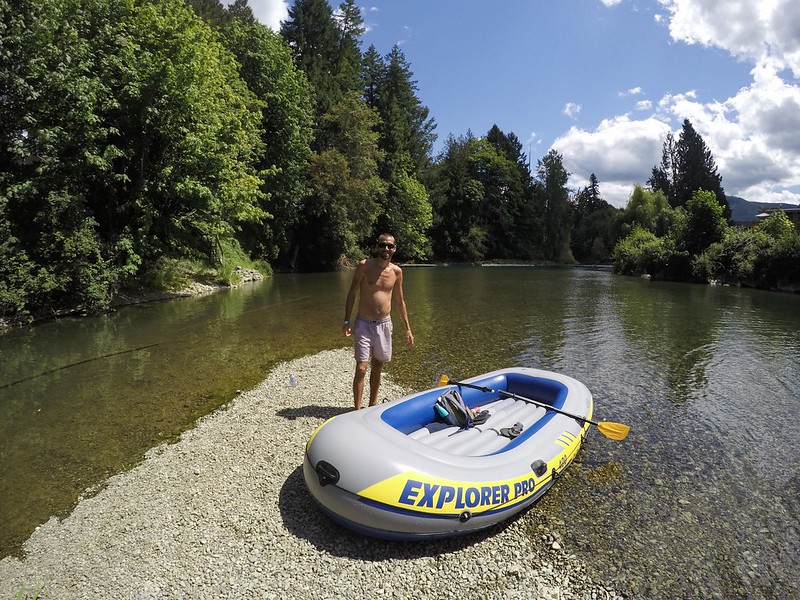 The first section was very anticlimactic. It was so slow that we were barely moving and it just went by a residential area so we decided it was a good time to have our messy picnic lunch. Eventually the houses were replaced with forest and we could pull over on the gravel beaches and dip in the river. Sometimes we just moored up at a shallow section for a swim but at one stop Craig suddenly said there were crustaceans everywhere…I looked down to see half a dozen mini lobsters near my feet and I panicked and jumped back onboard. 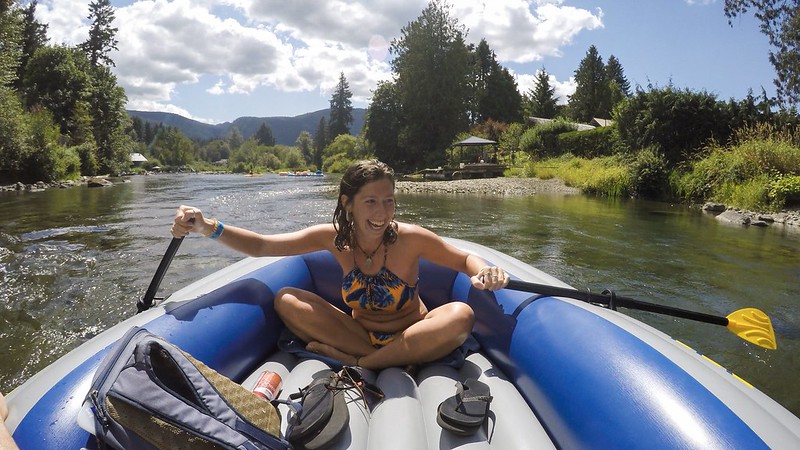 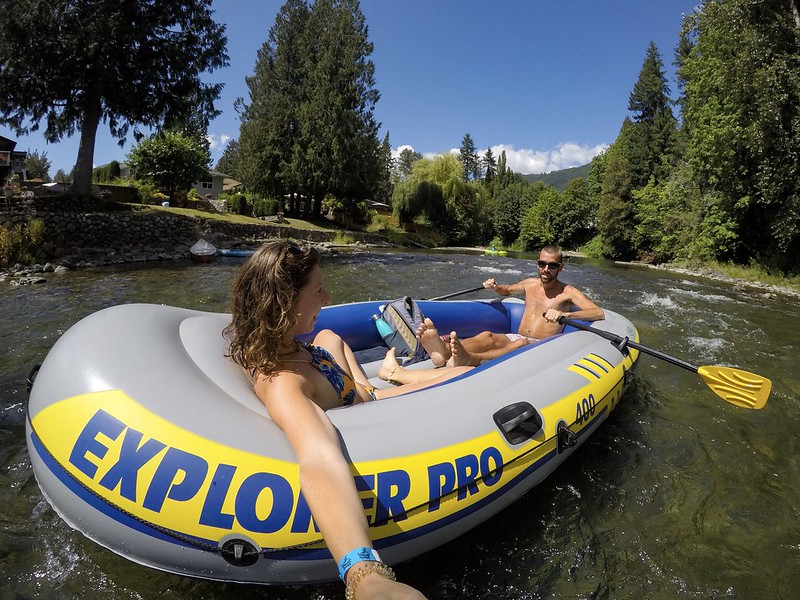 The second half was much faster and had rapids to navigate. Craig decided as it was just a ‘float’ trip I would be in charge of rowing as it would be easy. But trying to navigate the boat between rocks was way more challenging than I’d expected. I had Craig calling out directions while I frantically jiggled the oars around trying to make it look like I was working hard. I figured I just wasn’t strong enough though so I began to get angry as we approached the biggest rapids yet so Craig hopped out and stood in the shallow river, holding onto Roland so we could quickly swap positions. Turns out it wasn’t me, Craig couldn’t steer the damn thing either and we were wincing as we glided over rocks, lifting up our bums to take the pressure off, but then we’d hear the sound of her rubber base scraping along the rocks. Luckily she’s much stronger than our last boat which had punctures everywhere, one patch even came off while on a river float in Florida and all we had to stick it together was a piece of gum I was chewing. 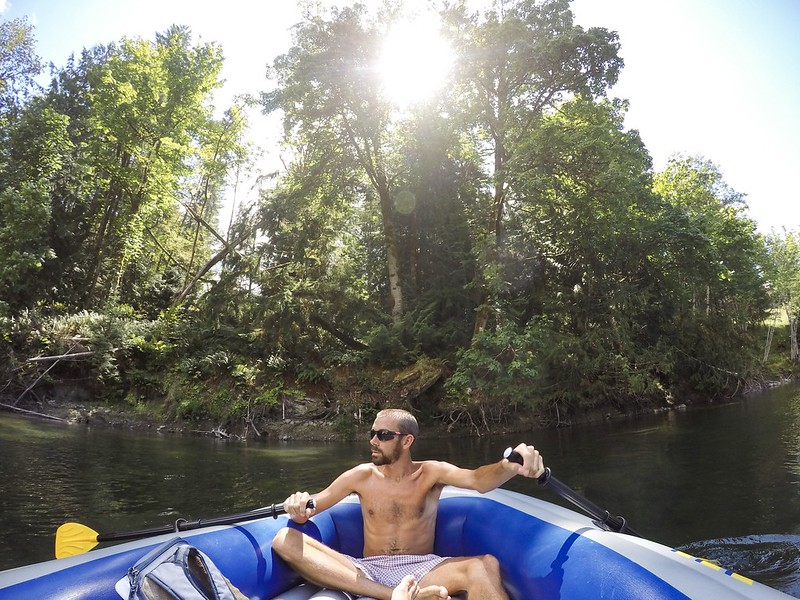 The scenic drive ended in Duncan, the totem capitol of Canada. It had a tiny downtown area with footprints along the pavement to lead tourists around all the totem poles which were really lovely and a combination of animals and people. Some of them had little plaques explaining the story of the carving. I kind of felt it was a shame to have them all in a town though, they’d look so much nicer in a natural setting like by the sea. 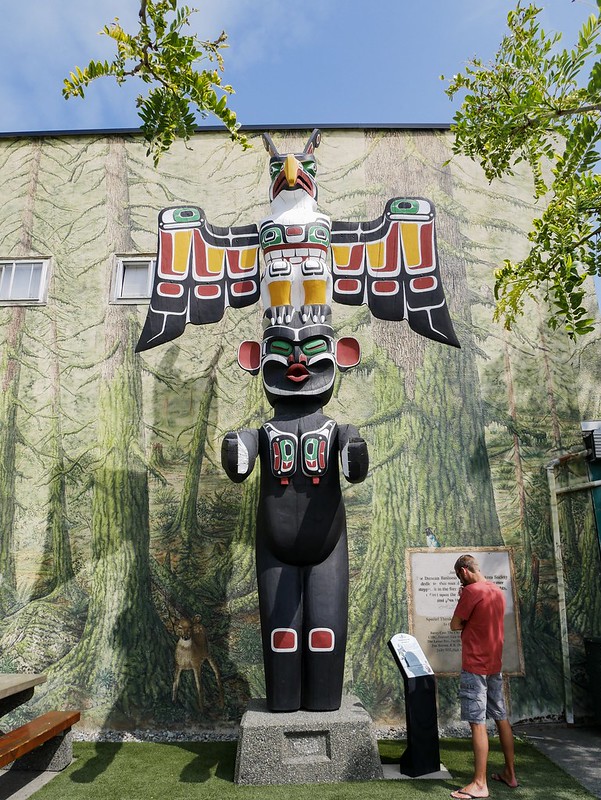 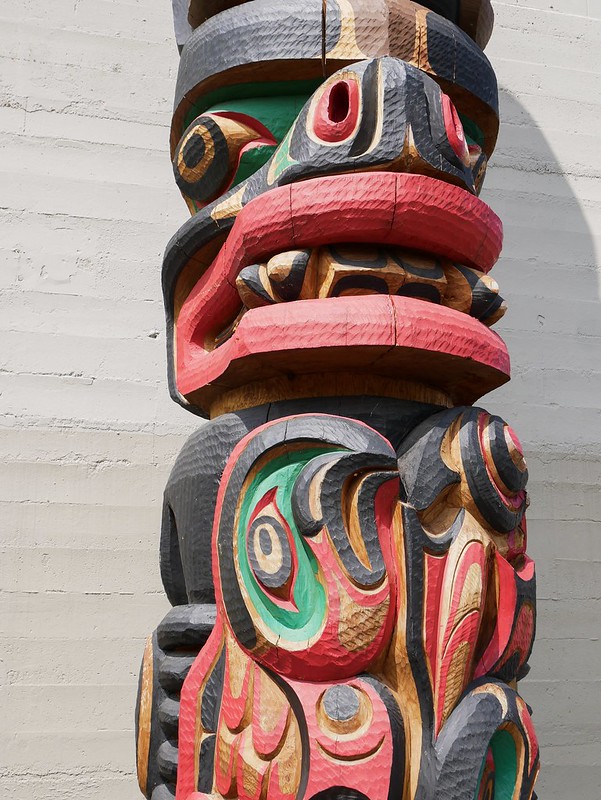 Duncan was surrounded by a vast area of farmland and we stopped at a cheese farm where we were free to walk around and see the animals. It was mainly for kids but we found the cows pretty fascinating as they had some really ingenious gadgets. There was a ‘voluntary milking system’ where a robotic milking parlour milks 60 cows up to 6 times a day. When the cows enter the machine they are given a barley pellet which they love and they actually enjoy the relief of being milked so there’s always a line up at the robot! It also treats each cow individually, giving her the correct amount of food and number of milkings based on her age and health. Around their pen were big yellow brushes like in a car wash and when a cow leans on one it spins around – it’s called the ‘cow spa’ and it keeps them clean too. There were free cheese samples at the end so overall it was an hour very well spent.

With the southern area sufficiently covered we began to make our way towards Tofino and the Pacific Coastline.