Lake O’hara has always been a bit of a mystical place to me. It’s basically just a very protected area of Yoho National Park that is only accessible with a shuttle bus, therefore it remains a tranquil paradise. The shuttle system is to limit the number of guests so within minutes of the tickets going on sale they sell out. The other option is to stay at the lodge but that also requires booking in advance and it’s extremely expensive too. We could never plan that far ahead so even on our third trip to the Rockies it seemed impossible to visit. But we spoke to a ranger who filled us with optimism, he said we could wait at the bus stop on standby incase anyone had cancelled, and if that failed he recommended walking the 11km road. He had personally done this on a few occasions and said he’s always managed to get a seat on one of the return buses. So that’s exactly what we were going to try.

We drove into the park the day before for a short but very rewarding hike up to an old firelookout. A storm passed overhead as we made it to the overlook but the sun popped back out, turning the lake below us a vibrant blue colour. 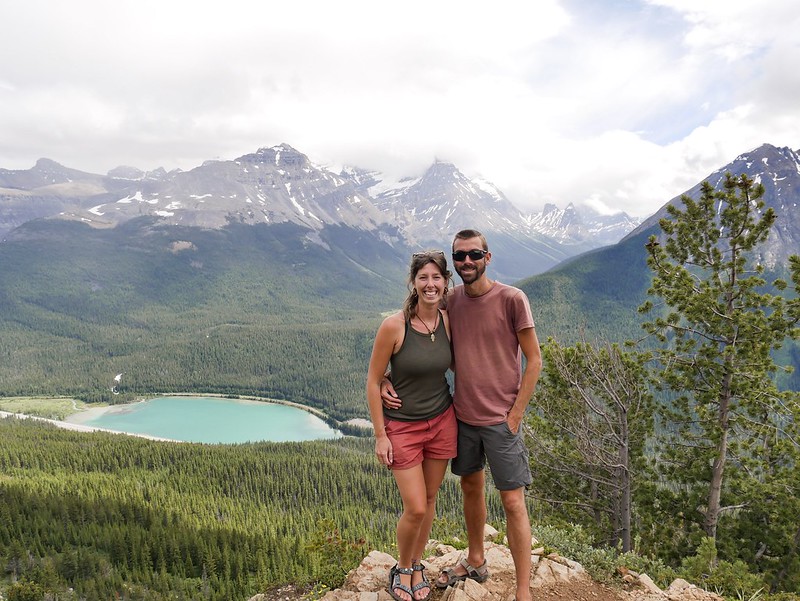 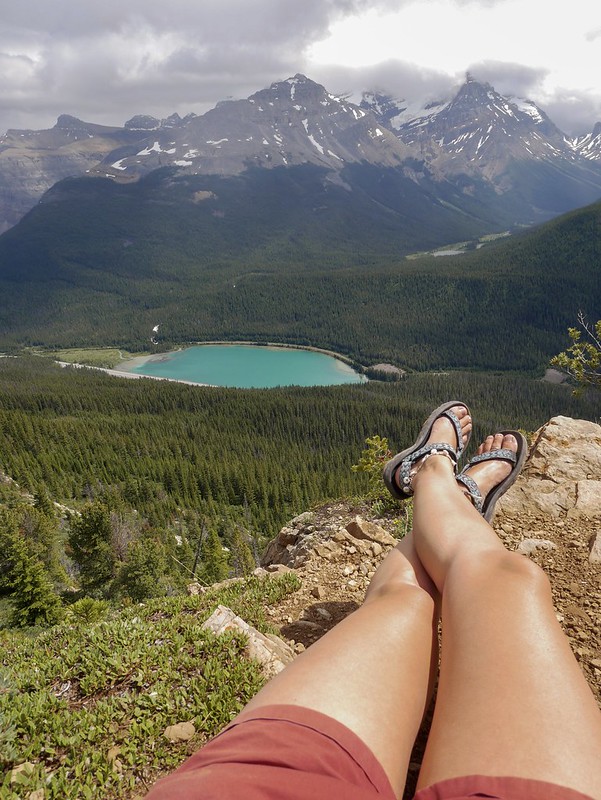 The following morning we woke at 6am, drove to the O’hara road and ate our breakfast in the car park. The first bus didn’t leave until 8:30am but instead of waiting around and risking there being no available seats, we just walked the road instead. The dirt road was fairly level, with a gradual incline and the odd mountain view amongst the forest. There were kilometre markings along the way which was a little demoralising at times but we plowed through and arrived after two and a quarter hours of non stop walking. There was a log cabin on arrival that housed a basic little cafe and information desk. A fire was crackling inside and a huge tray of freshly baked carrot cake sat on the counter. The young worker was really helpful and enthusiastic, giving us advise about the trails we could do. 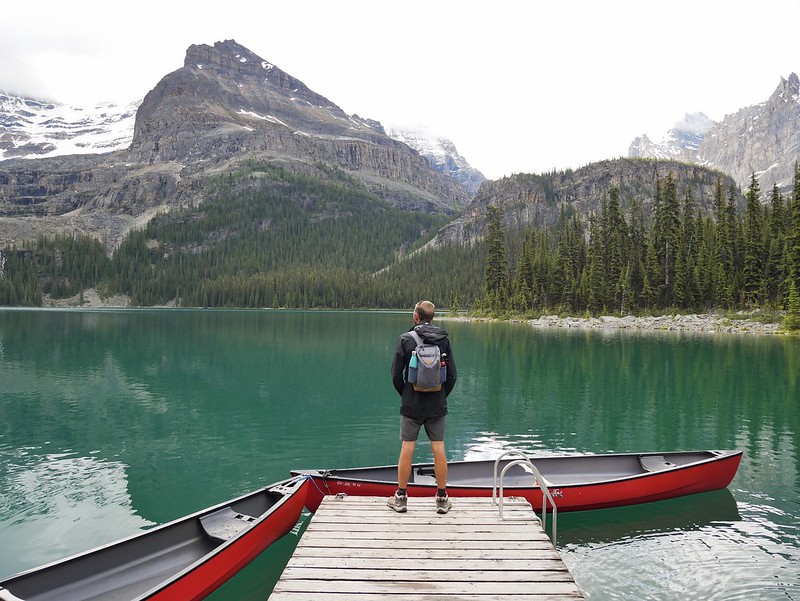 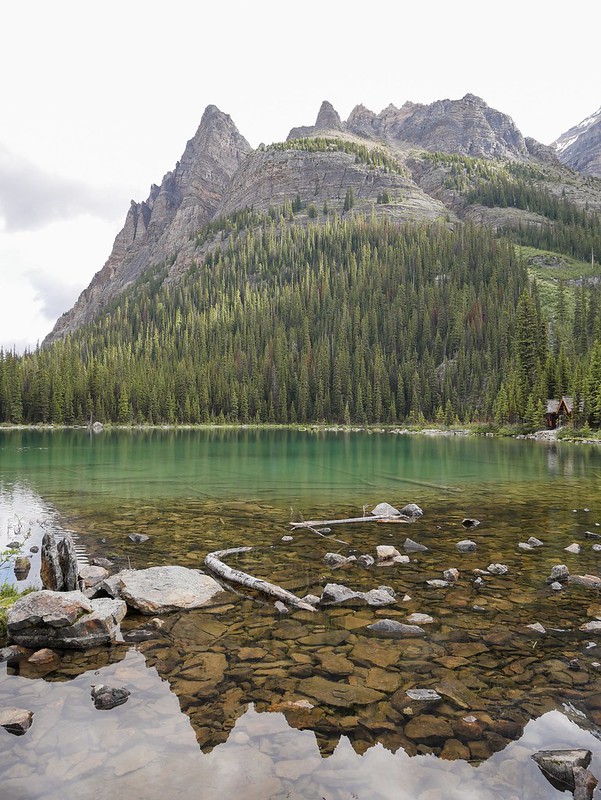 We excitedly set off and found ourselves on a wonky jetty floating on the shores of Lake O’Hara – we made it! The mountains around the lake were incredible, some were pointed like a pencil while others had multiple layers around the top making them look like fancy cakes. After skirting the shores of the lake we veered onto the Opabin Prospect Route where a short uphill path led us to a jaw dropping view. We were standing on a cliff edge with three majestic lakes below us – O’Hara was the largest and had a distinctive blue colour from the glaciers above it, but the other two lakes were much greener in colour. 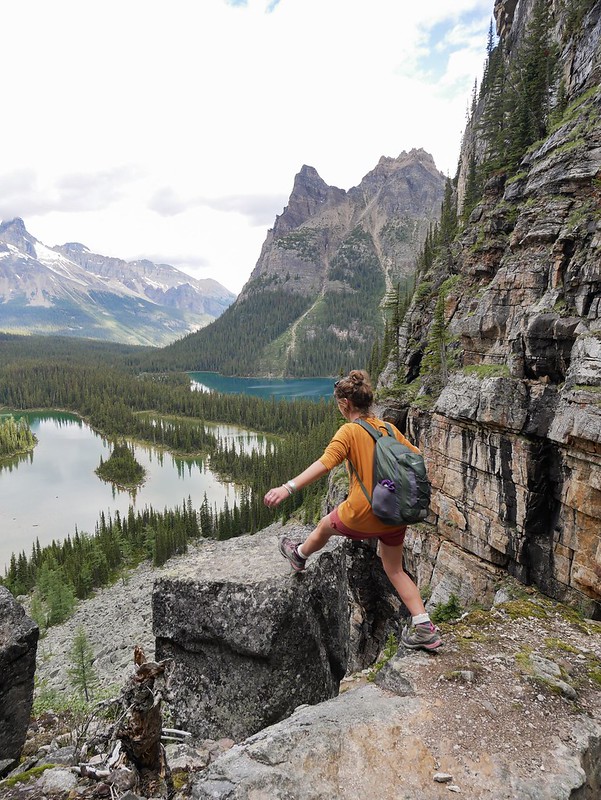 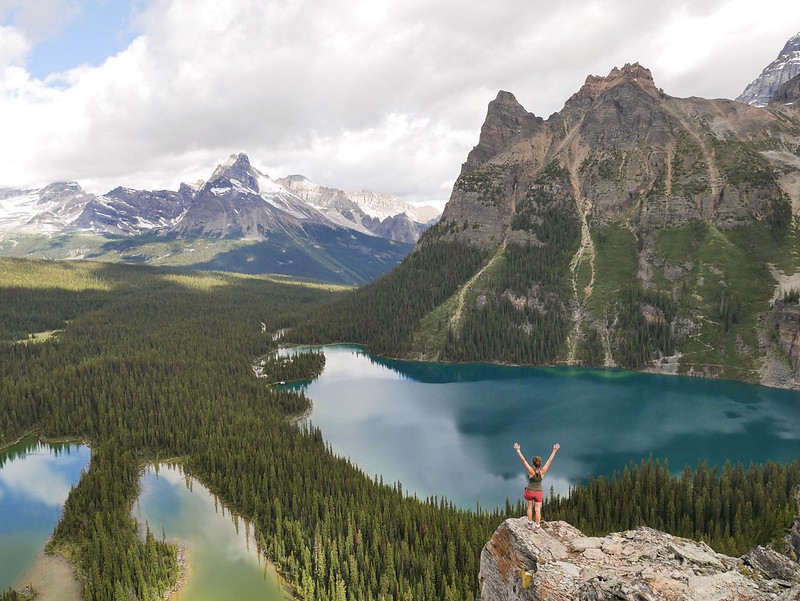 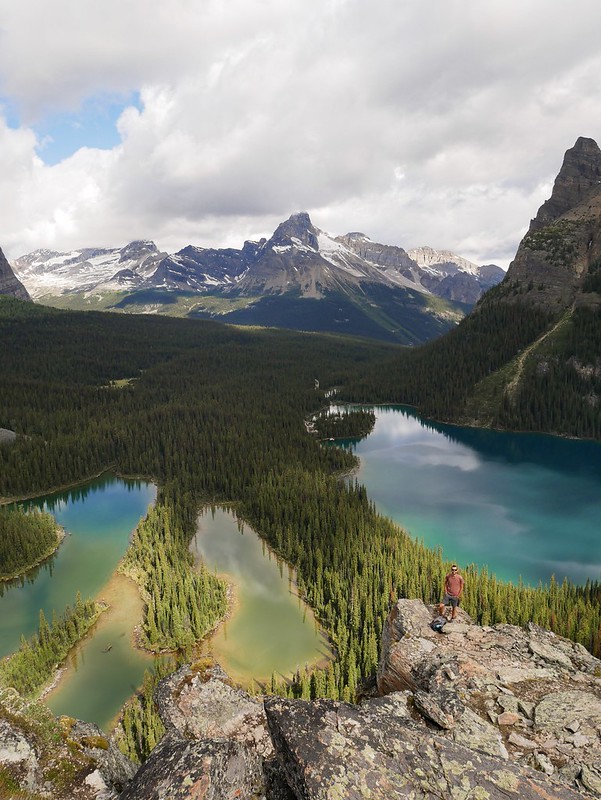 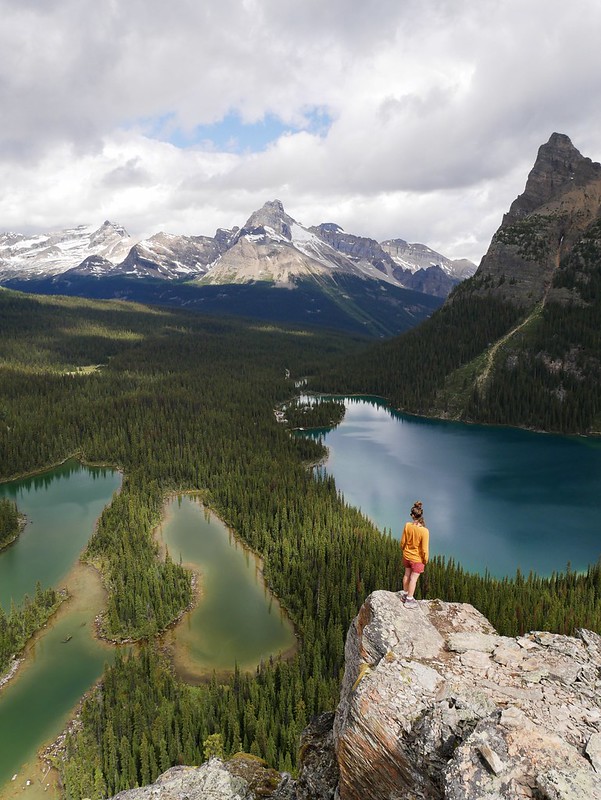 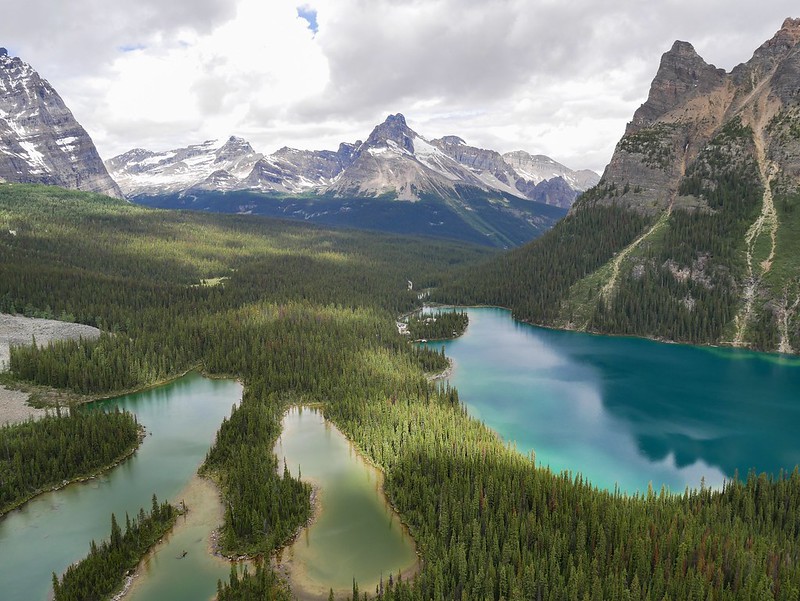 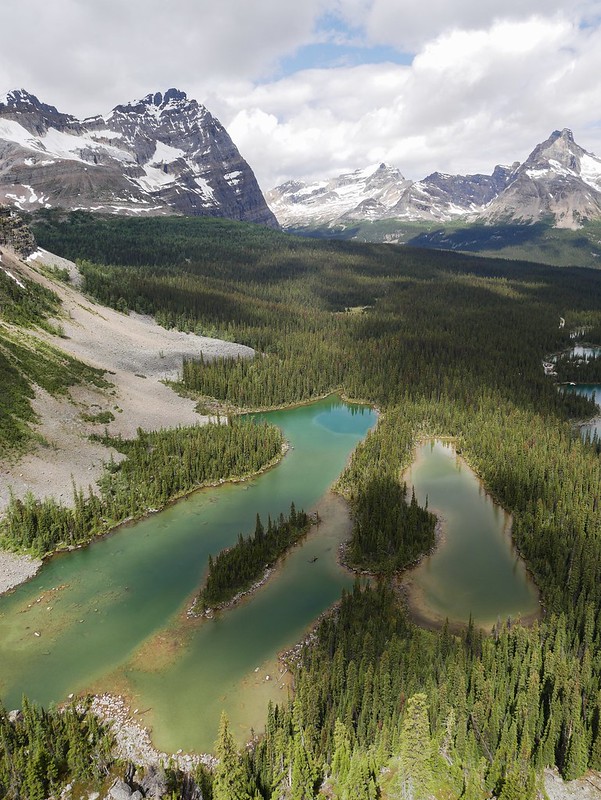 The area we were hiking was a high plateau surrounded by dramatic peaks and dotted with lakes, meadows and forest. There were hardly any other people around and we felt like we were in Narnia; an accessible door into the Rockies that wasn’t crowded seemed way too good to be true. The trail led us to a lake encircled by mountains and glaciers before we looped back around to take a different route back. We still had a couple of hours spare before the 2:30 shuttle bus which we’d opted to try and get as appose to the 4:30 which we’d heard is usually full. There were trails heading off in every direction and I wanted to do them all, but with limited time we decided to walk around the shores of Lake O’Hara and then climb up a slope to get a view down. We were rewarded for our efforts and sat atop a rocky ledge with a sheer drop to the blue water. It was a lovely spot and the sun was shining bright at last. 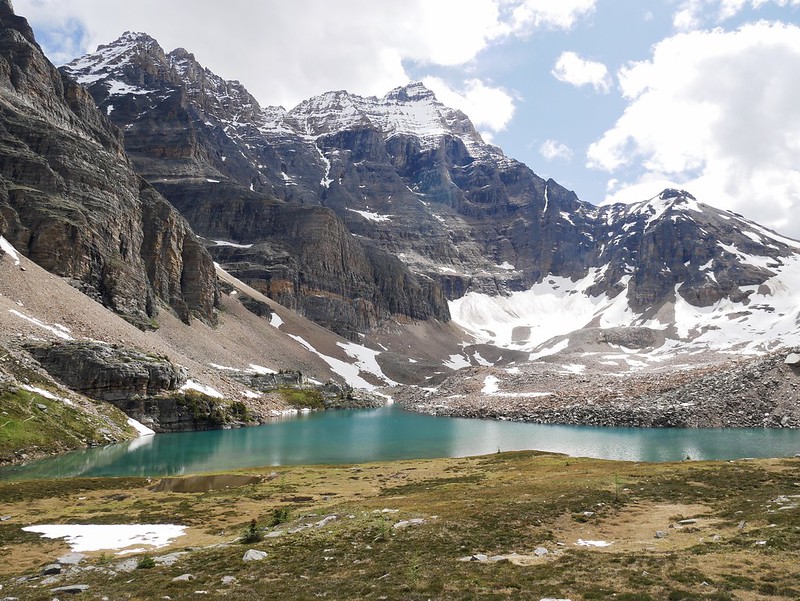 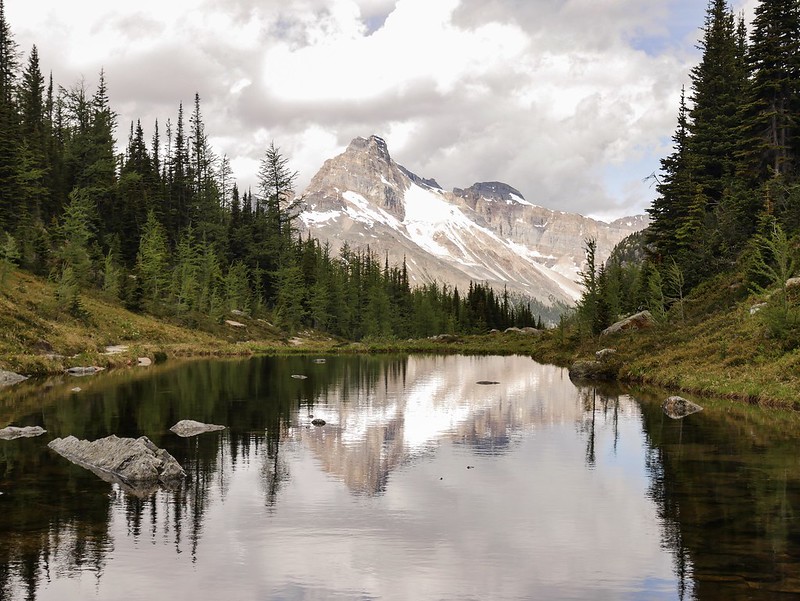 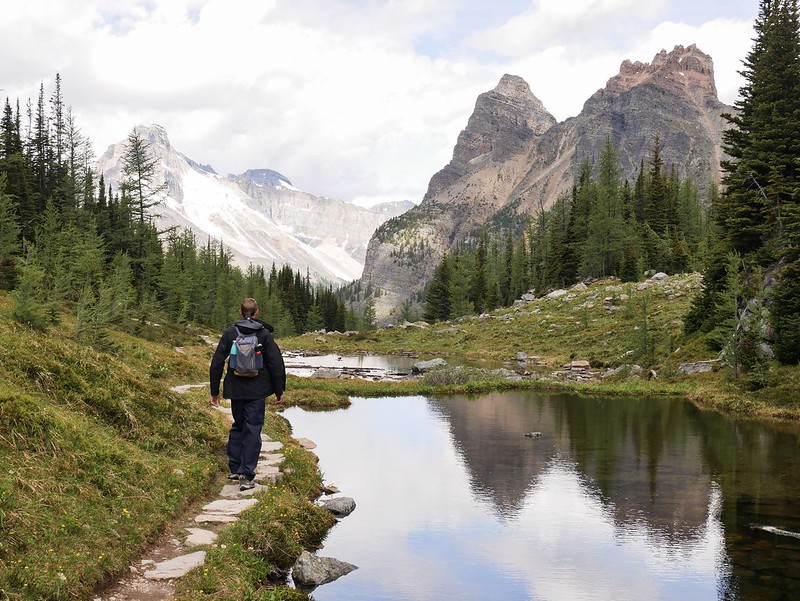 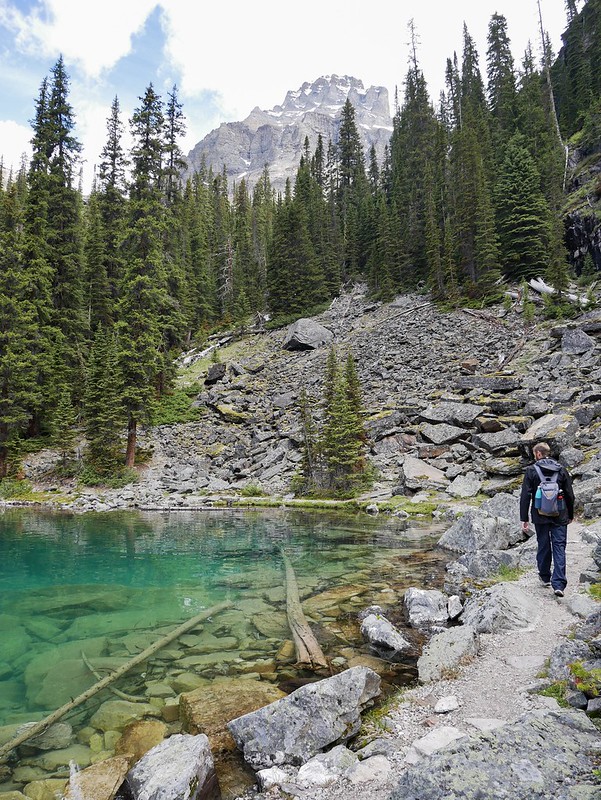 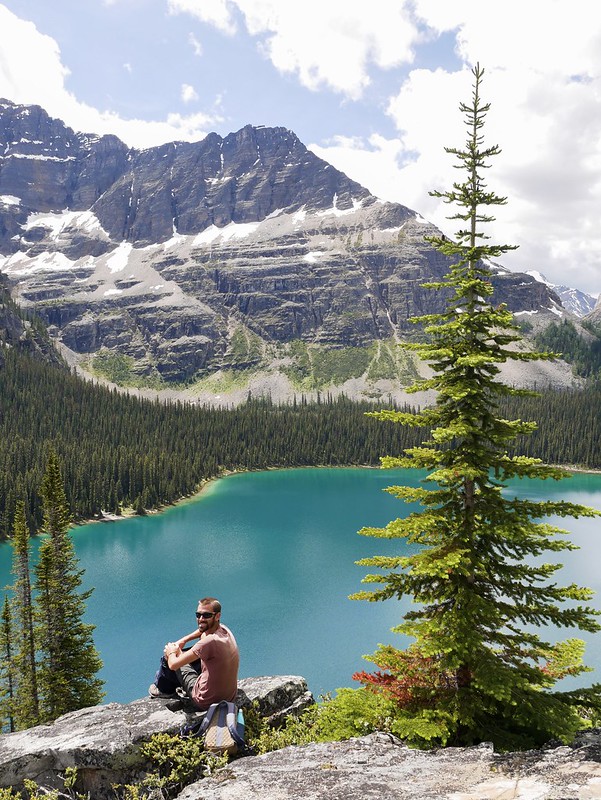 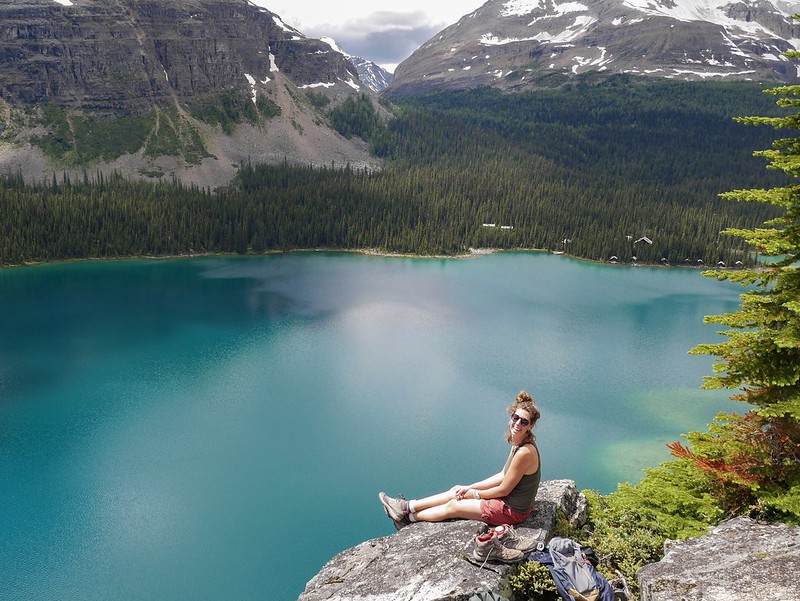 With plenty of photo stops of reflections along the shoreline we made it back to the cabin and bus stop by 2pm. This meant we had some spare time to get a slice of that carrot cake I was eyeing up earlier and a cup of disappointingly cold coffee. It was a fresh batch of cake and I think it was the best slice of cake I’ve ever eaten, and I consider myself to be a bit of a cake snob. 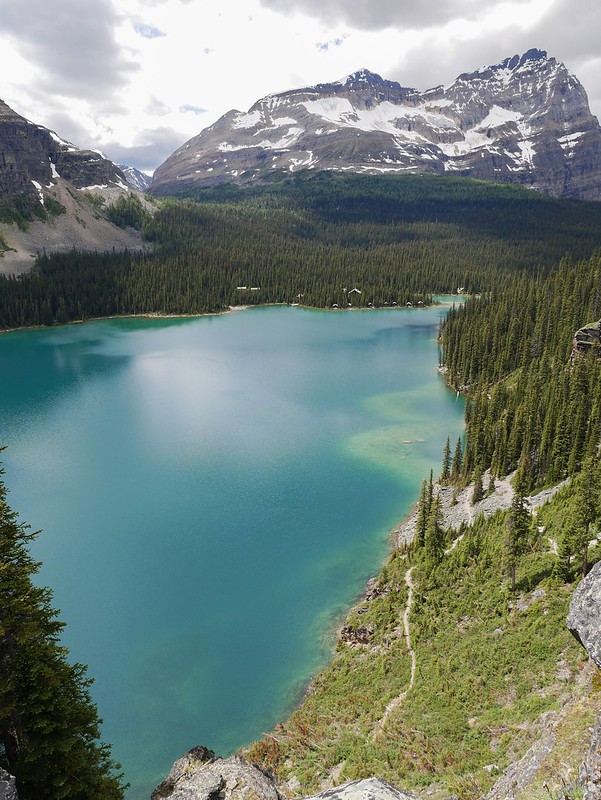 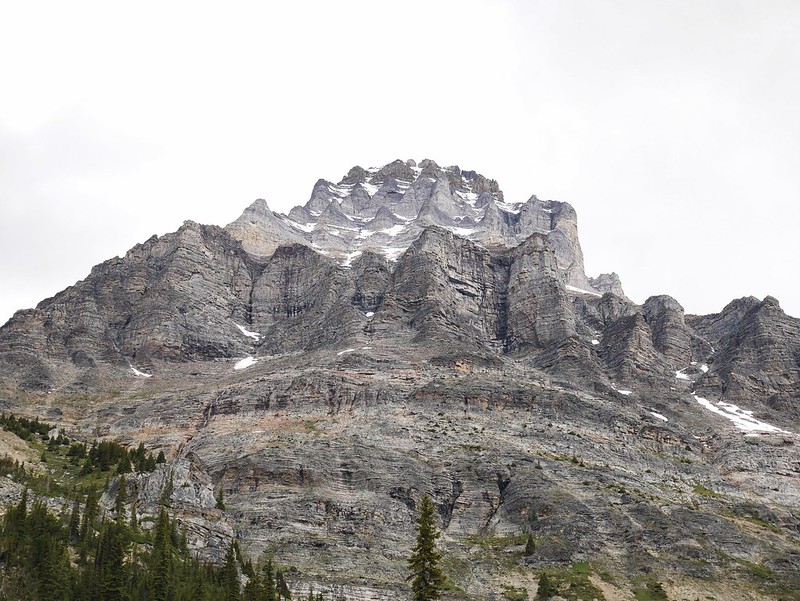 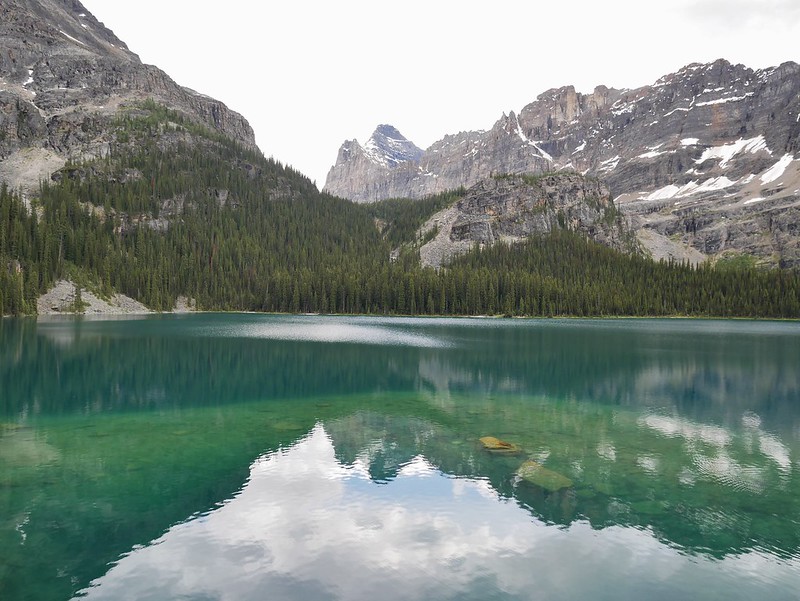 We sat on a bench amongst other people waiting for the bus and we started getting swarmed by mosquitos. The lady next to me said they only came along when I sat down which was embarrassing. Then I realised everyone else was wearing trousers and coats while Craig and I had lots of skin on show so were clearly easy targets for the mozzies. The lady next to me suddenly said “I hate to seem rude but I’m going to have to sit somewhere else” and she sat across the road to escape my mosquito invasion. 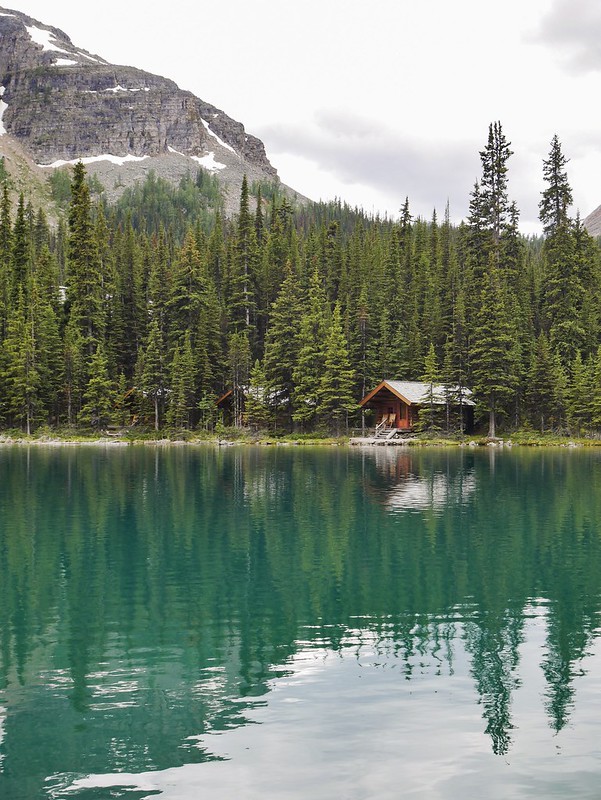 Some people had pre-booked tickets for the bus while about 15 of us were waiting on standby. The ranger did the count and said “everyone bar two people can fit on the bus, so you need to decide amongst yourselves who won’t be getting on this bus”. We knew there was a risk in waiting on standby but with the 2:30 bus being full, that meant the 4:30 bus was probably the same and we’d have to wait until 6:30pm, hoping that there was space on that final bus or we’d have to walk the road again. We’d arrived at the bus stop before four other people so we just stood up and headed to the bus and luckily the last two to arrive kindly stayed behind. Boy were we happy to get onboard, we’d woken up at 6am so we were shattered and happy to get back to our rolling home for a well needed hot drink. We were so happy that we made it to the legendary Lake O’Hara though. The tranquility was wonderful and after seeing how busy Lake Louise and Moraine had become with hundreds of hikers and full car parks we really felt like O’Hara was one of the last hidden gem’s that was accessible without a multi-day hike.