We crossed back into Canada at the quiet Chief Mountain Border, stopping just beforehand at the final village on the USA side where I had $6 to spend. I figured I’d just get a couple of chocolate bars but there happened to be a really quirky vintage shop where I found a bison figurine for $2 and a $4 jar of huckleberry jam which we’ve been meaning to try for ages. Craig was very impressed with my purchases until the bison slipped out my hand and two of it’s legs fell off.

But we were really sad to leave America, it’s one of our favourite countries and albeit the scenery and wildlife in Canada is similar, it lacks the wonderful free camping that the western States is stocked with…and the desert, we’ll sure miss the desert.

Once we were in Canada the road skirted along the eastern edge of Waterton Lakes National Park and as it was getting late we decided to just sleep in a pullout on the quiet road. Soon after parking up Craig spotted a bear crossing the road. We dashed into our front seats, strapped our seatbelts on and drove up the road to get a closer look. It wasn’t just one bear though, it was a big mama black bear with her three tiny cubs. Our hearts melted. They crossed the road and roamed through the dandelion filled grass eating as they went. Each cub was a different colour, one black, one brown and one caramel, and all incredibly adorable. Then Craig spotted a skunk in the grass and so did the mama bear who stood up to have a better look. We’ve seen so many dead skunks along the roads so it was pretty cool seeing the stinker alive and waddling through the grass. Apparently owls are immune to their spray so they prey on the animals. 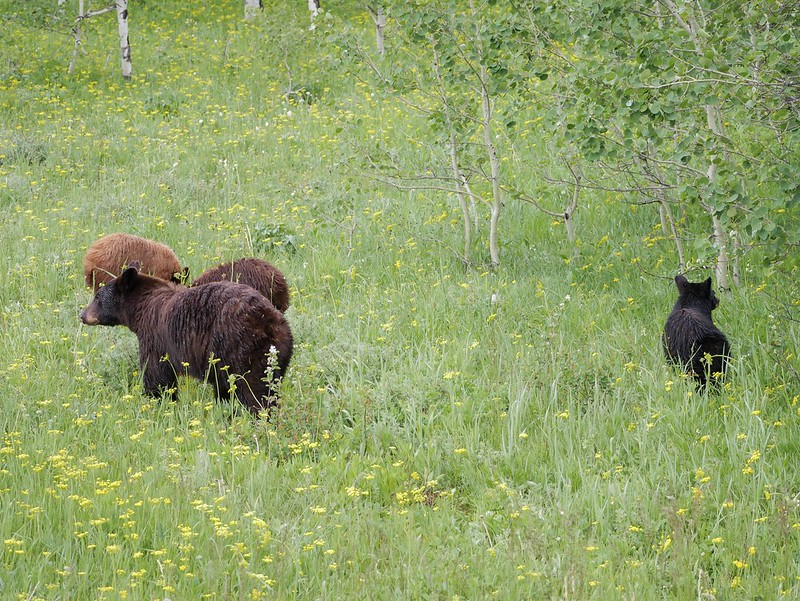 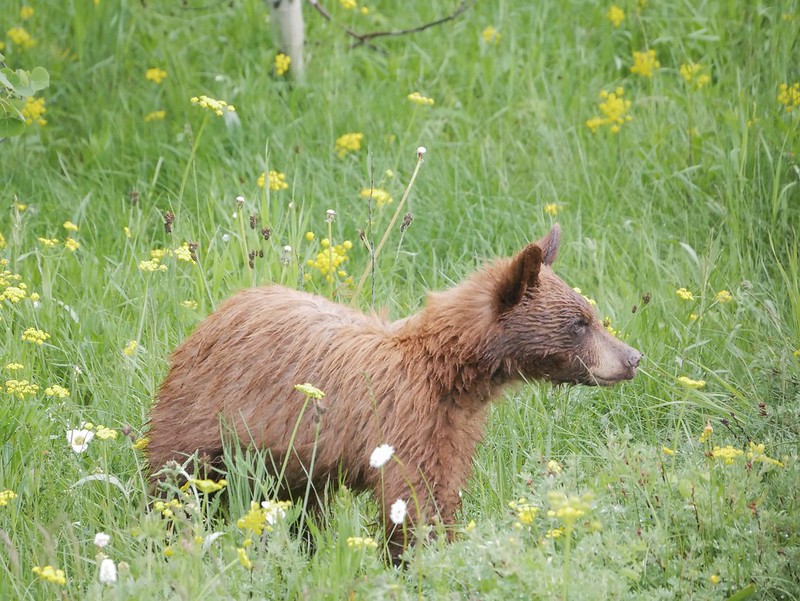 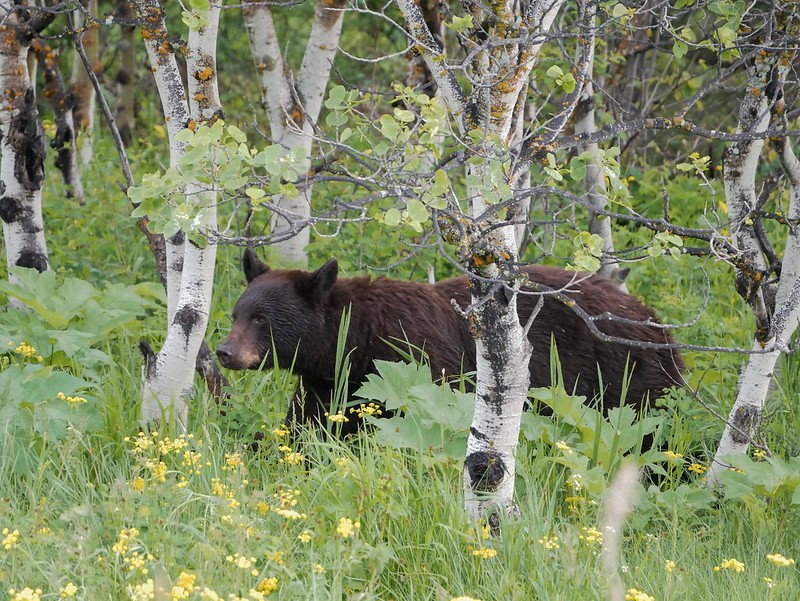 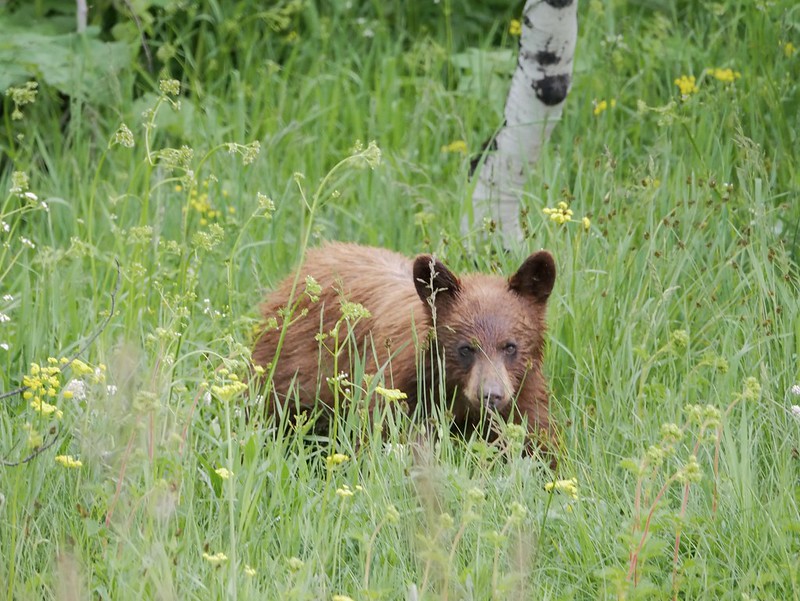 We had a good night sleep and the following day we entered the National Park. There was a huge fire in 2017 and sadly it’s caused most of the park to be shut down. When the trees burnt down they lost all the roots which acted as natural glue, holding rocks back along the roadsides and without the roots the roads had to be closed off for major repairs. There were very few trails left to hike and it meant our favourite road where we spotted thirty bears on our last visit was now closed off to vehicles. We ended up taking the trail up to Bertha Lake which was a nice lake but after the dramatic scenery in Glacier I was a little spoilt and unimpressed. 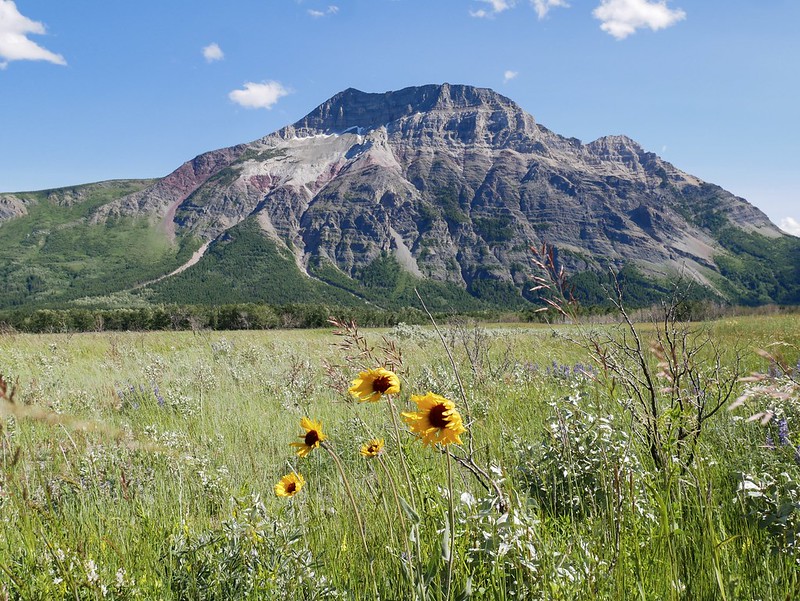 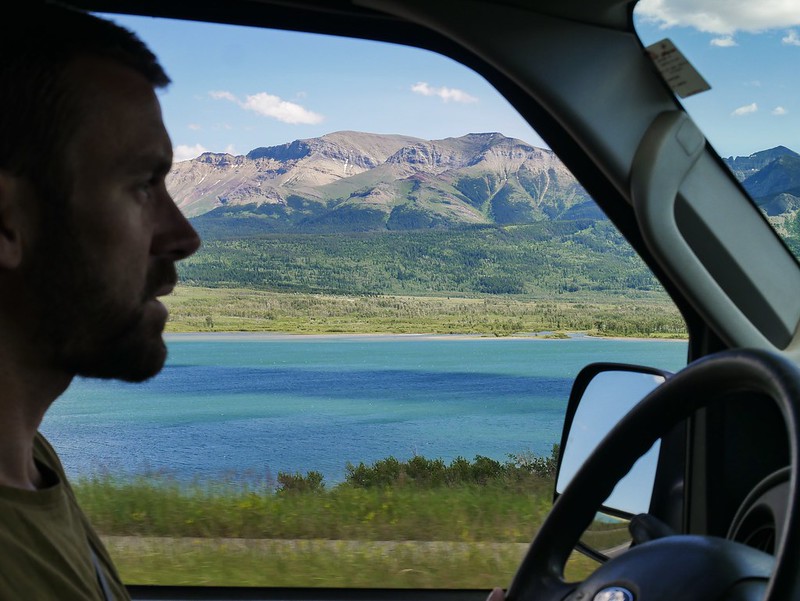 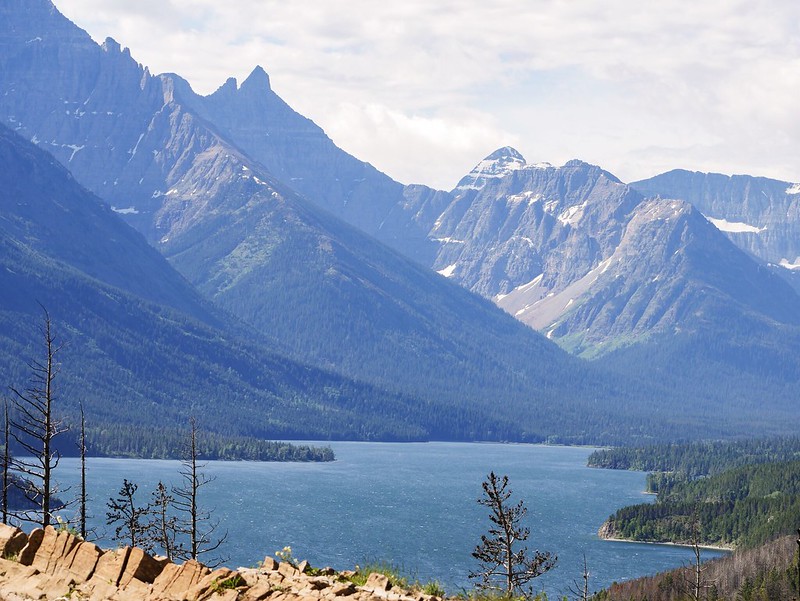 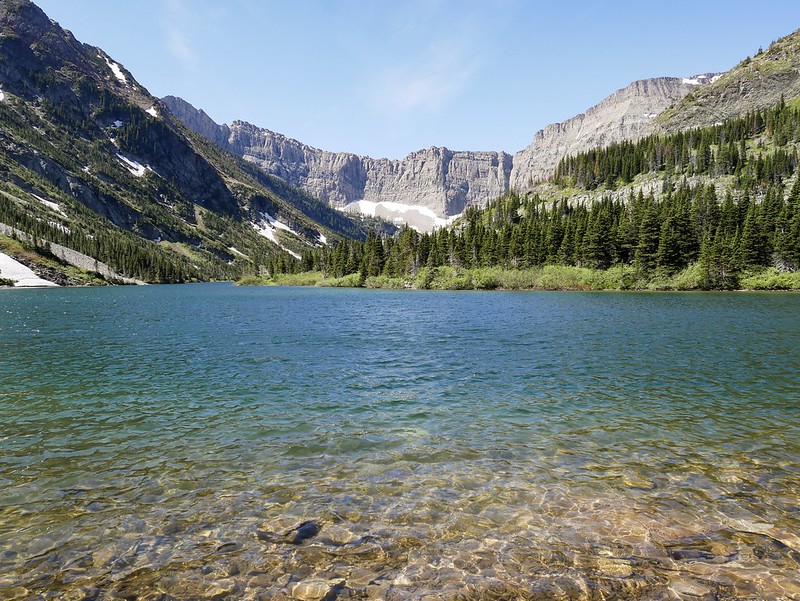 In the evening we watched the clouds turn orange and a vibrant rainbow pierce through the middle. We’d slept well the previous night so we decided to stay in a pullout again but this time a ranger came by and said we had to move on. Such a pain and a bad welcome back to Canada but he was a very nice ranger at least and he sent us to a campground nearby. We hate paying for campgrounds so I was kind of relieved when the worker said they were full. I was already saying it was no problem and backing out the office with the plan that we could get away with staying in a pullout on a different road now that the campgrounds were full, but the damn worker said “but where will you stay? There’s nowhere else to stay around here, so let’s just see if we can squeeze you in” bloody brilliant I thought with severe sarcasm. Well, he sure squeezed us in, it wasn’t even a camp spot, it was 11pm and we’d be leaving by 7am yet the chap wanted $30 for a parking space. It’s the exact reason why we don’t stay in campgrounds – surrounded by other campers and in a much less scenic spot than what we could get for free. Luckily my days in India came back to me and I tried a bit of subtle haggling…he required cash for the unserviced sites (bit dodgy I thought) and I told him I only had a foreign card that wouldn’t work in an atm (it would work but it would also charge me $5 and I refused to do that). But I did have $20 cash leftover from when we were in Canada three months before so I offered him that – with the agreement that we wouldn’t have a shower and he let us have it. 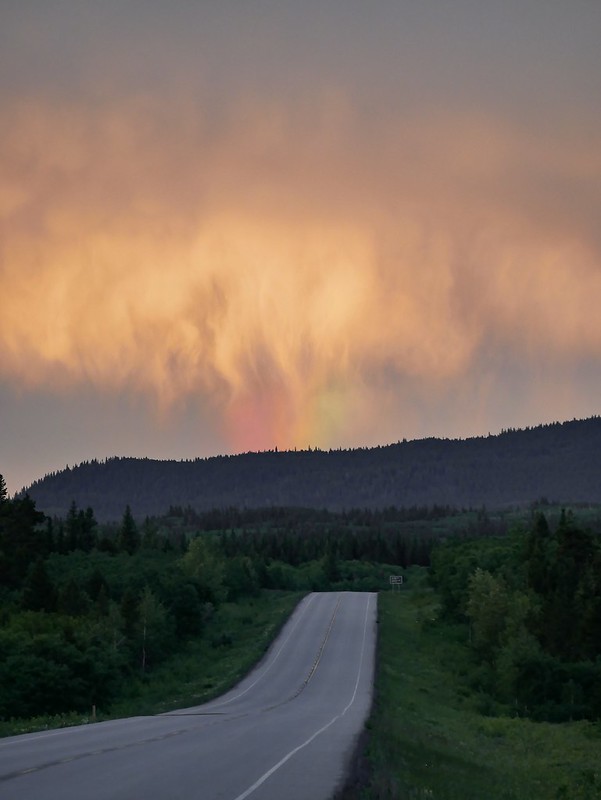 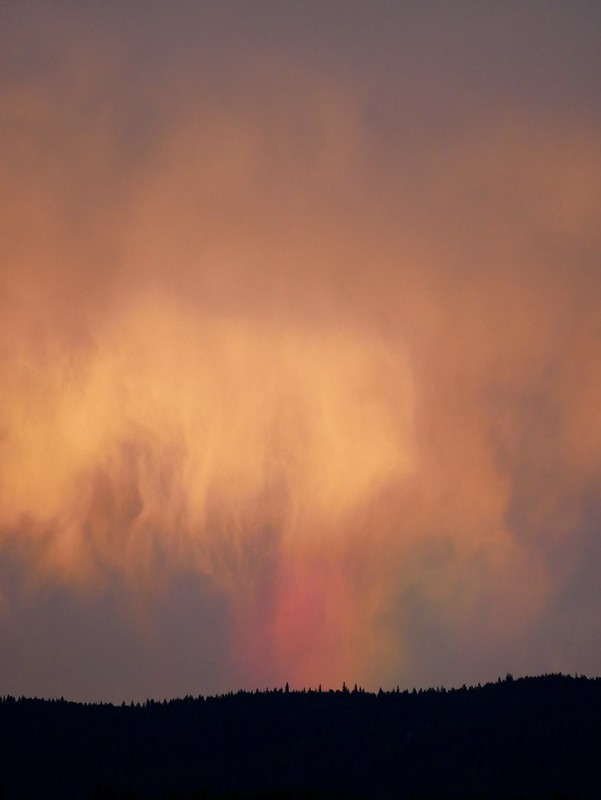 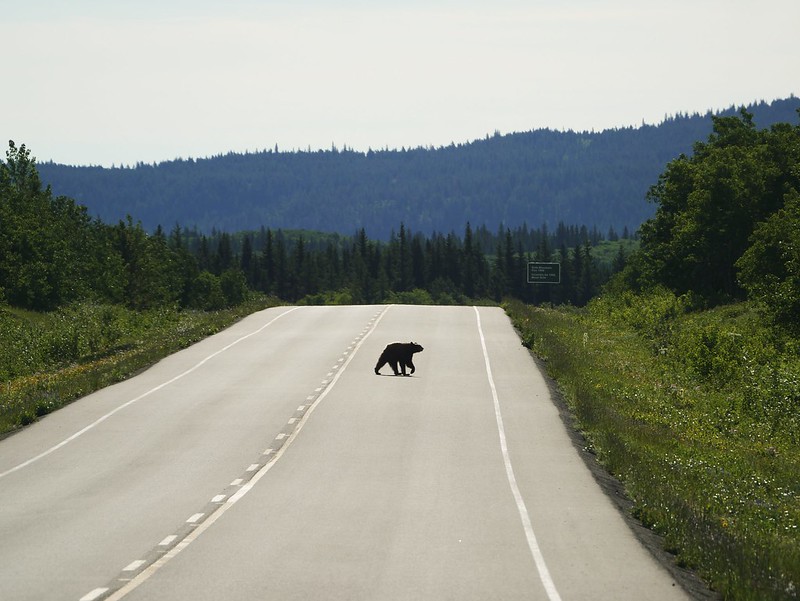 I don’t know what inspired me but I downloaded a film based on a true story about a bear attack in Canada. Not my finest choice but I do love a good thriller. It made us pretty nervous about hiking in bear country but the following morning we were greeted by yet another bear crossing the road. Luckily it wasn’t as big as the one that killed people in the film so we felt slightly more settled about setting off on a walk. We wanted to get a view across the national park so we decided to hike up Sofa Mountain. It was a much tougher hike than we’d anticipated. The first section was through a very underused trail where the foliage constantly brushed against our legs and I ended up with a big rash. Then we had to head for a rocky mound where the rocky scramble began. There was no route up the summit but that wasn’t the problem, the issue was the gale force winds blowing our feet from beneath us. It was wild and it got worse the higher up we got. We soon realised that it was too dangerous to continue up, the wind would blow us off the ridge so with a brief view of Waterton Lake we called it a day and headed back down. After the scramble we managed to take a different route back to the main trail and we ended up on an awful bushy hill. My rashy legs quickly became covered in scratches and I was paranoid about stepping on a snake. It certainly got me down at quite some speed while Craig was lagging behind after his sunglasses fell off his head and I refused to go back and help him find them in he scrubs. 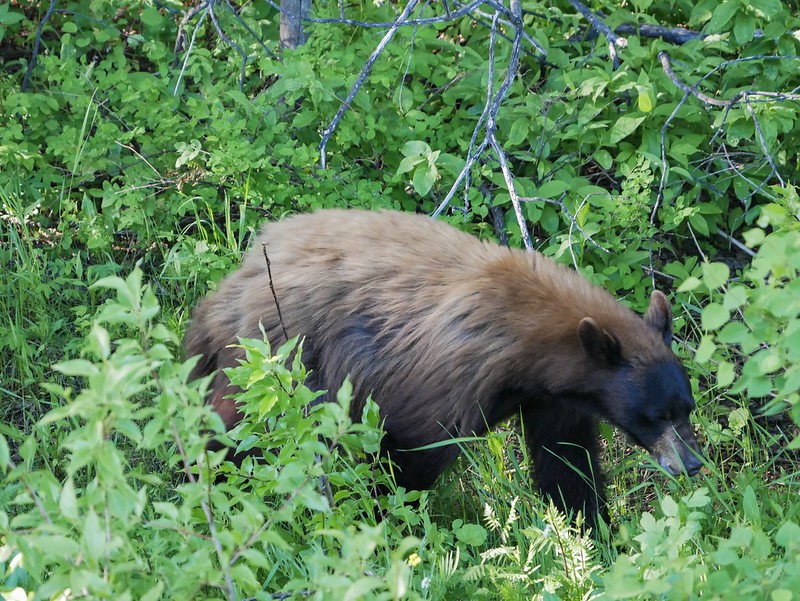 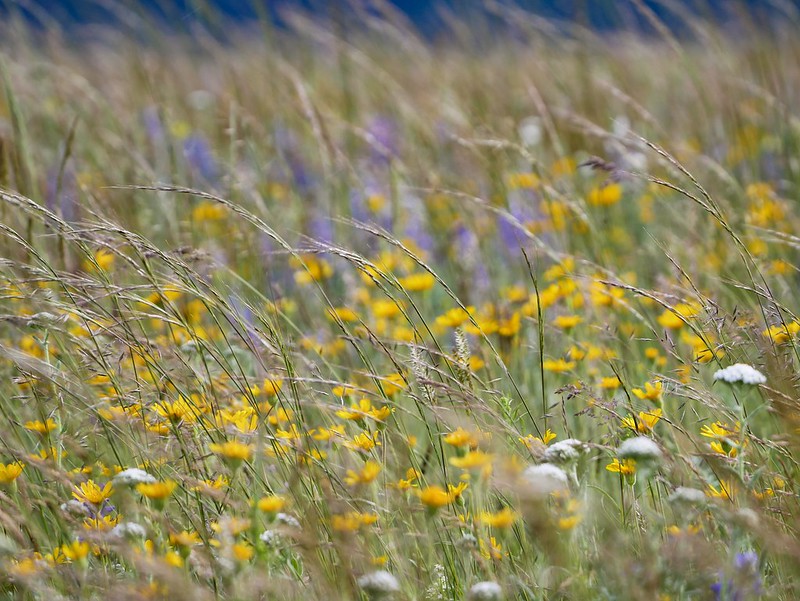 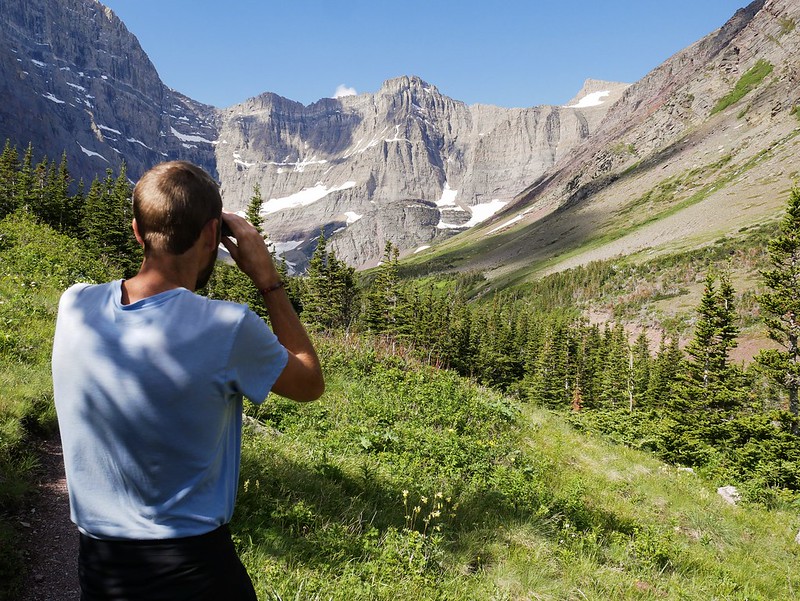 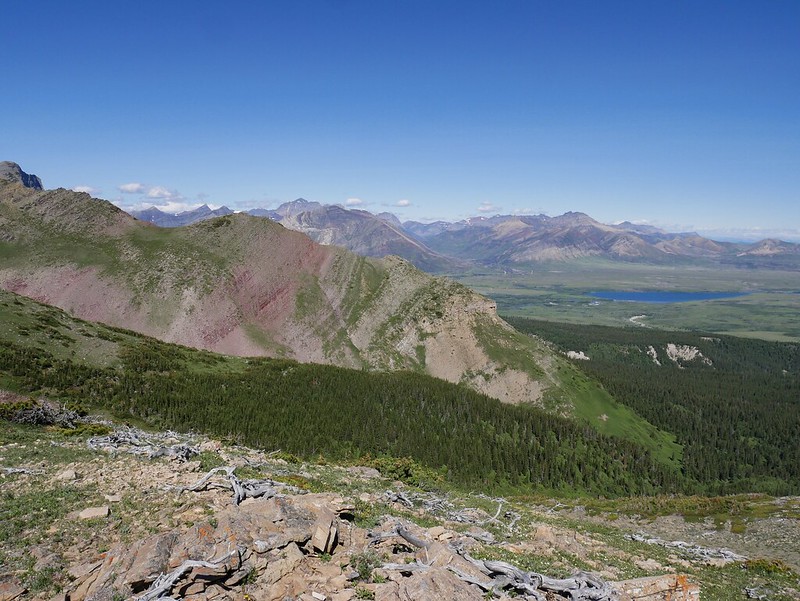 For our final hike in the park we tried another new one which took us from the bison paddocks down to the red rock road. That’s the road where we saw all the bears last time so we were happy that it led us that way and the whole route was through a vast meadow absolutely brimming with wildflowers. It was stunning and there were so many colours and bees around. When we reached the road we decided to walk along it a bit and see if we spotted any bears, it was closed to vehicles but cyclists and hikers were allowed to use it. We stopped for a break and then a scatty looking female sheep came our way. She was losing her winter coat and looked a mess, plus she seemed to be getting attacked by mosquitos so she was darting around trying to rid herself of them. Then she came our way and had a really aggressive attitude so we carefully walked away and she just stood in the road staring at us until we dipped down a hill. Further along we managed to spot a black bear deep in the bushes eating leaves. A couple of cyclists also stopped including a very irritating old couple (they always seem to find us somehow) and when they saw it was a black bear the old man shouted to his wife who was right beside him “Marge it’s just a black bear, not like the grizzly we saw right here yesterday!”. Some other people said they’d seen a deer up the road and then the man shouted again “Marge you missed that deer didn’t you, like when you missed the one right beside the road on our way from Kimberly yesterday…remember, the one you missed with the two adorable newborn babies”. I wanted to slap him. 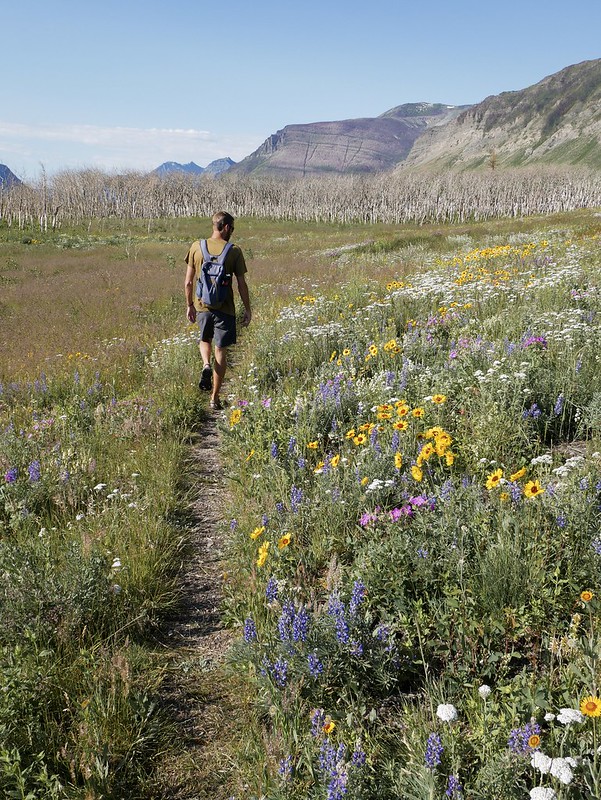 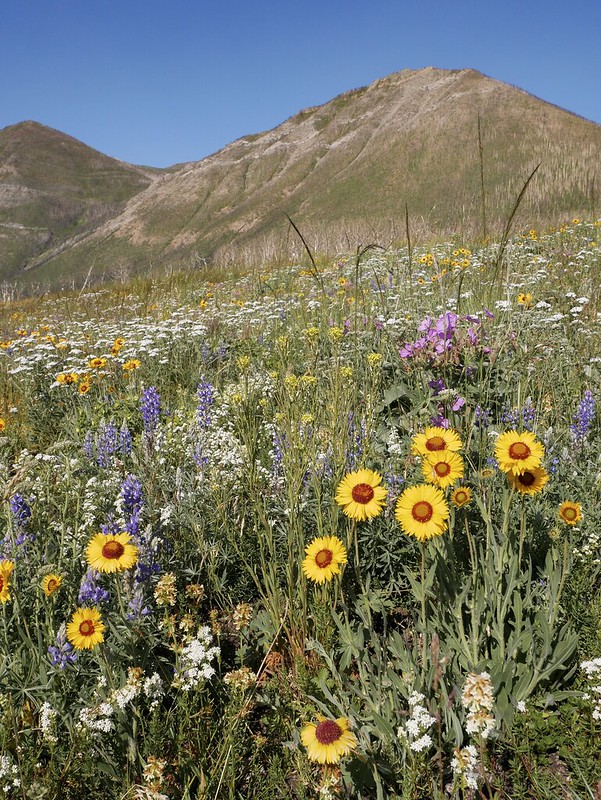 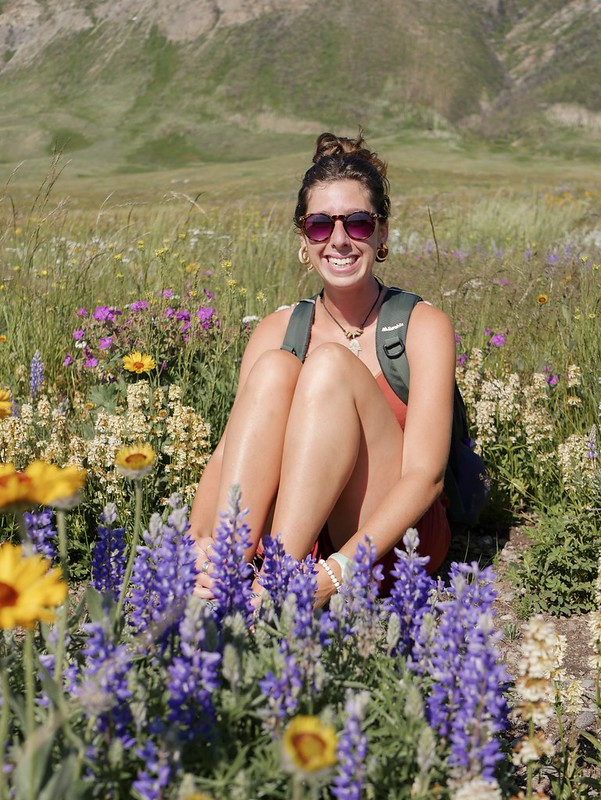 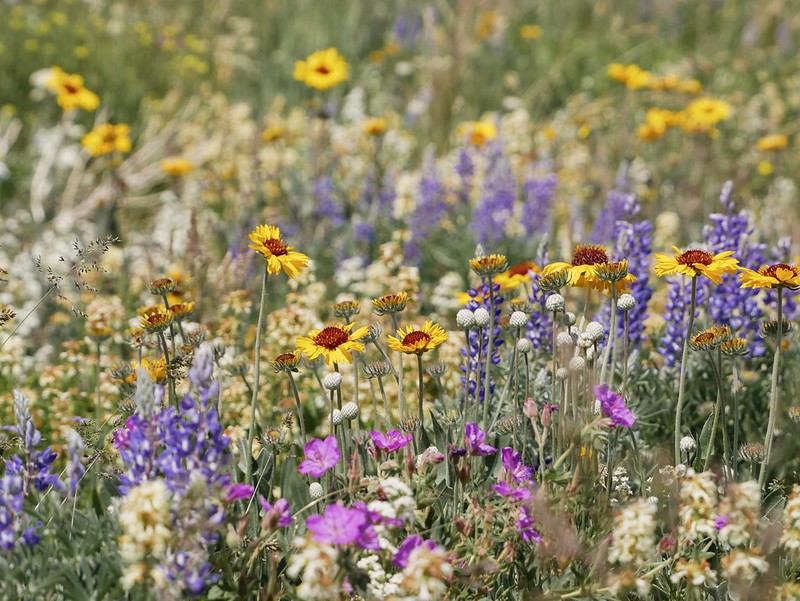 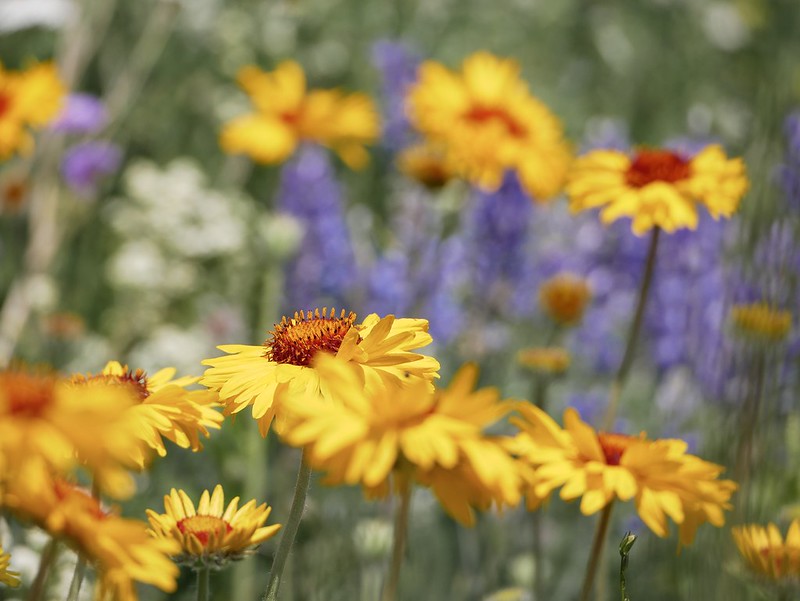 The bear was busy eating leaves and quite hard to see so most people left but we stayed a little longer. Then the damn sheep came back and caused some rocks to fall on the hill behind us which alerted the bear. Suddenly she stood up tall and looked around while making a grunting noise and I instantly let my camera swing from my neck and backed away. A bear standing up isn’t an aggressive act like the movies make out, it’s just them being inquisitive and getting a better look of what’s going on, but the noise she made was enough to send us on our way. Craig asked if I took a photo of her standing up and it hadn’t even crossed my mind, it’s funny how some people thrive on opportunities like that, snapping away like paparazzi but I just wanted to make sure we didn’t have an altercation with the sweet bear. 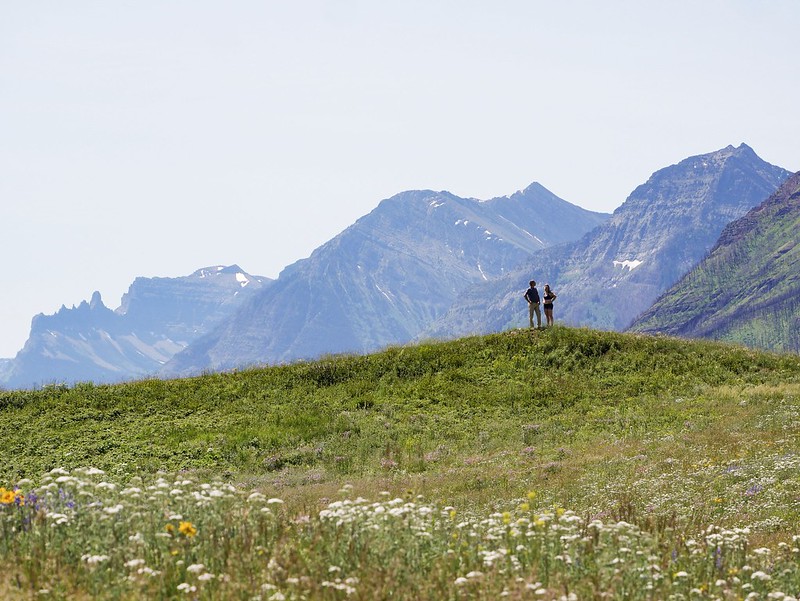 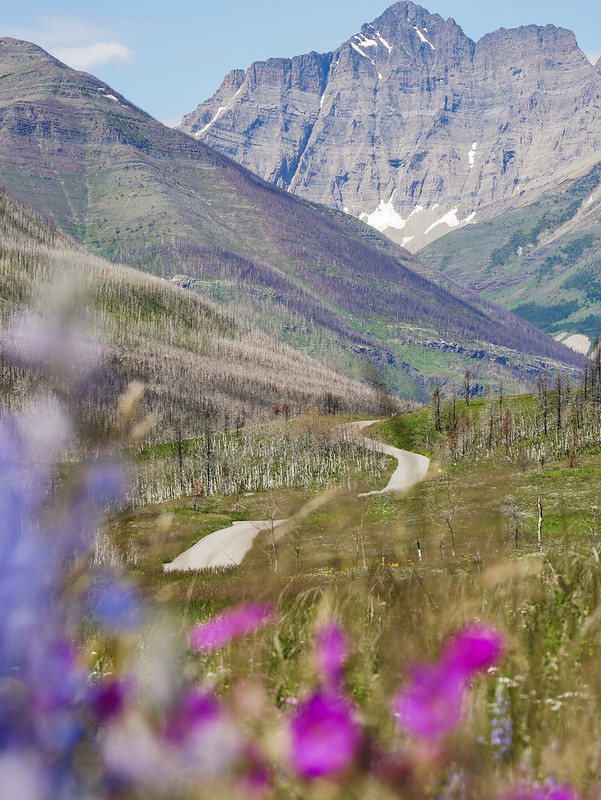 That afternoon we managed to spot some more bears but from the safety of our van. They were all black bears but one was the highlight of our visit. He was walking along the hillside and rangers were trying to stop people from pulling over for photos and blocking the road so we predicted the bears direction and went to a parking area. The bear made its way across the meadow right in front of us, crossed a road close to a surprised family and then headed for the river. Families were playing beside the river with kids, a few spotted the bear while others were oblivious. Then the bear crossed the river and went right through the rapids. It was amazing to see him walk through such rough water like it was just a casual stroll through a park. He then continued up another hillside and we watched as a group of horse riders rode along a ridge above him but they had no idea he was there. 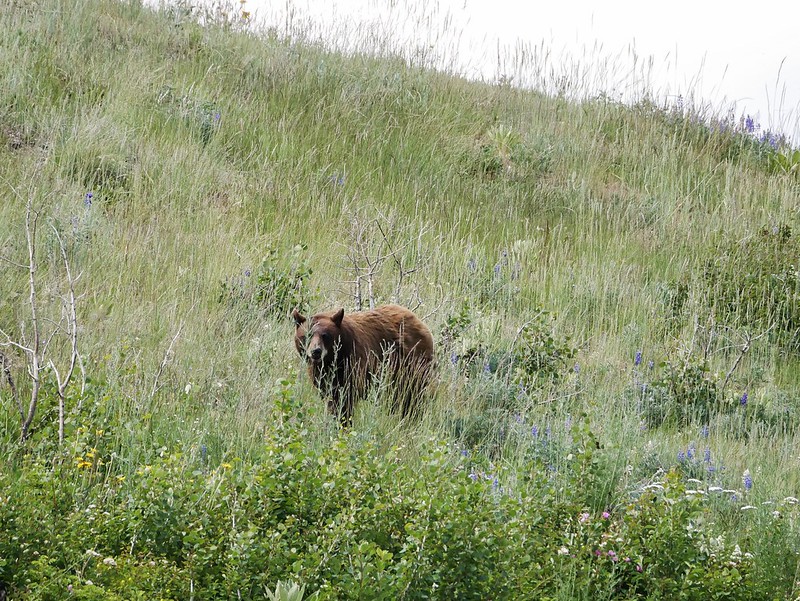 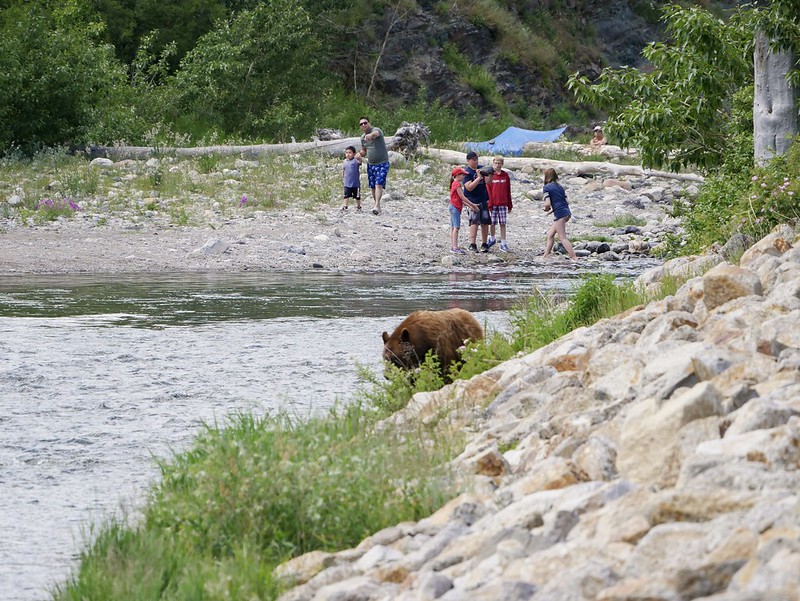 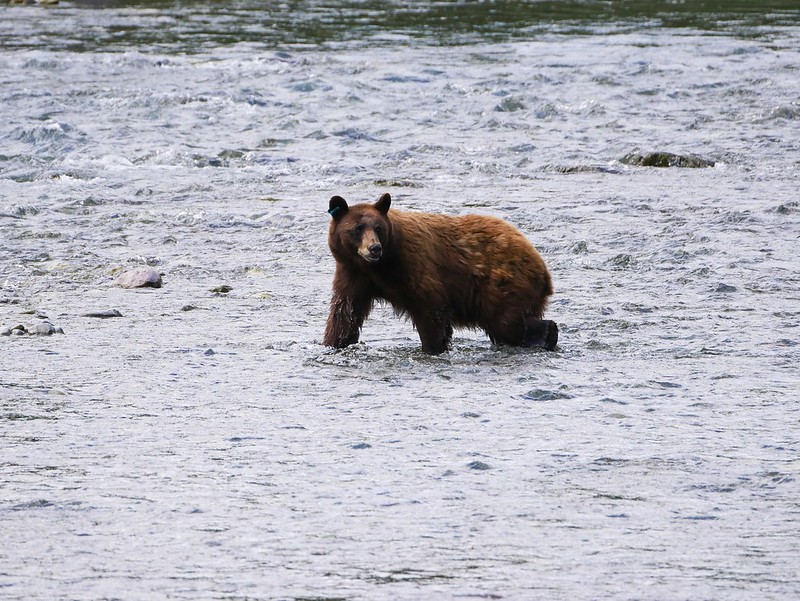 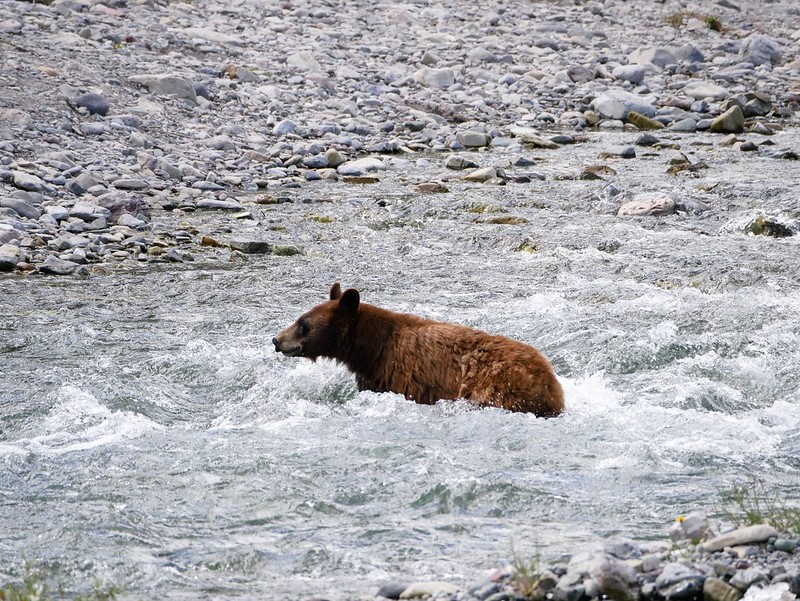 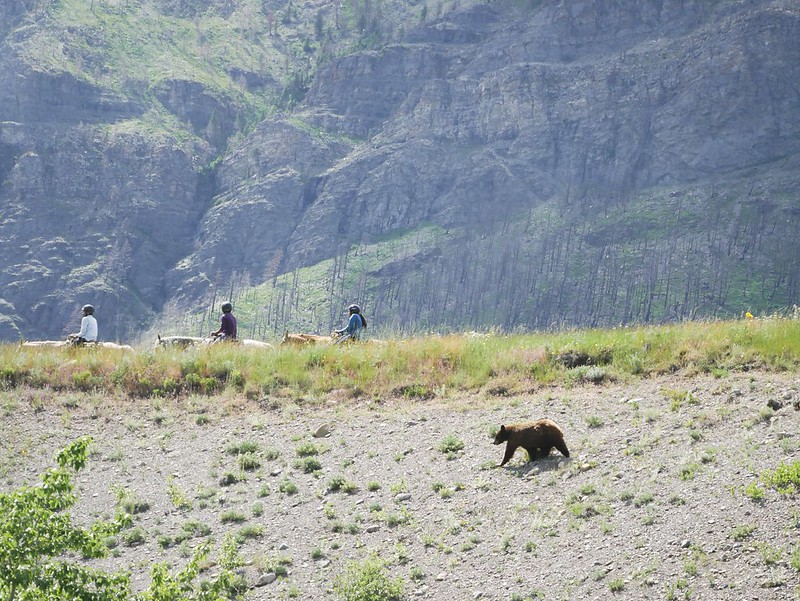 After three days exploring the park and a big holiday weekend approaching we decided to hit the road before the crowds arrived. Even though most of the park was closed off we still had a lovely time walking amongst the colourful wildflowers and watching the bears roam. 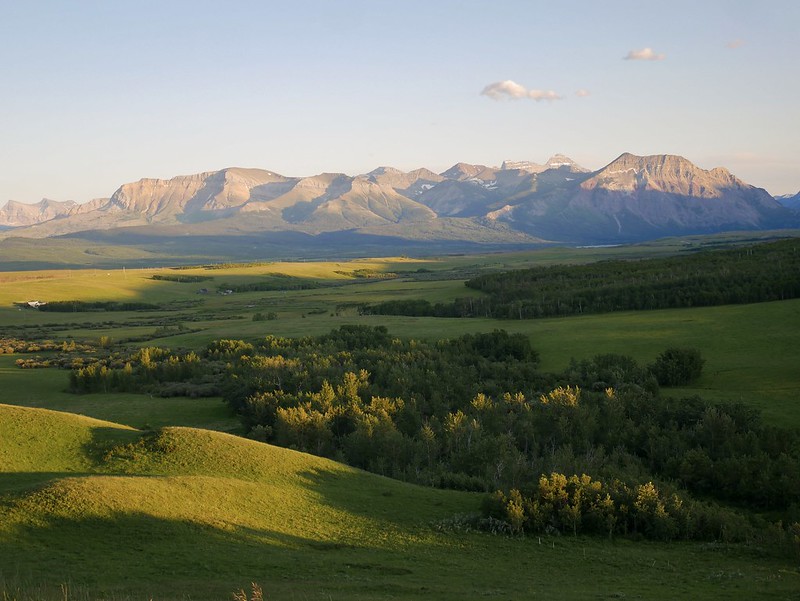 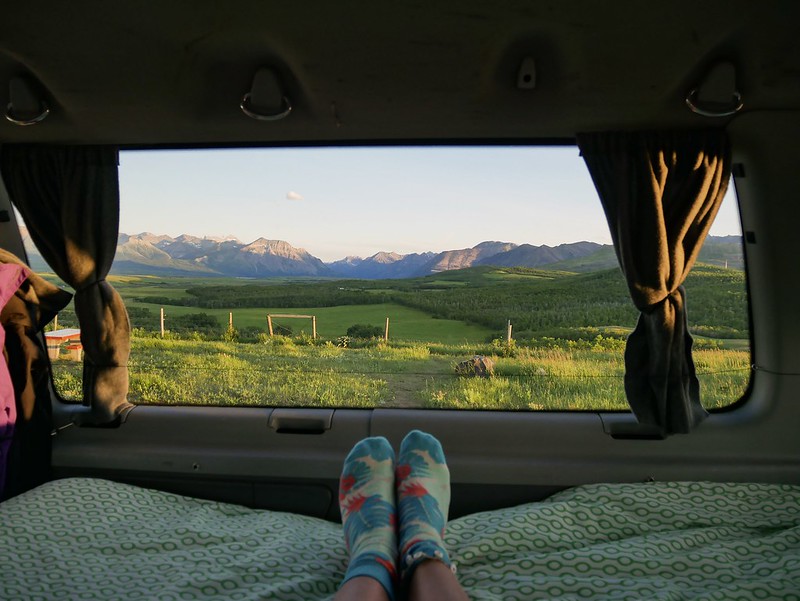 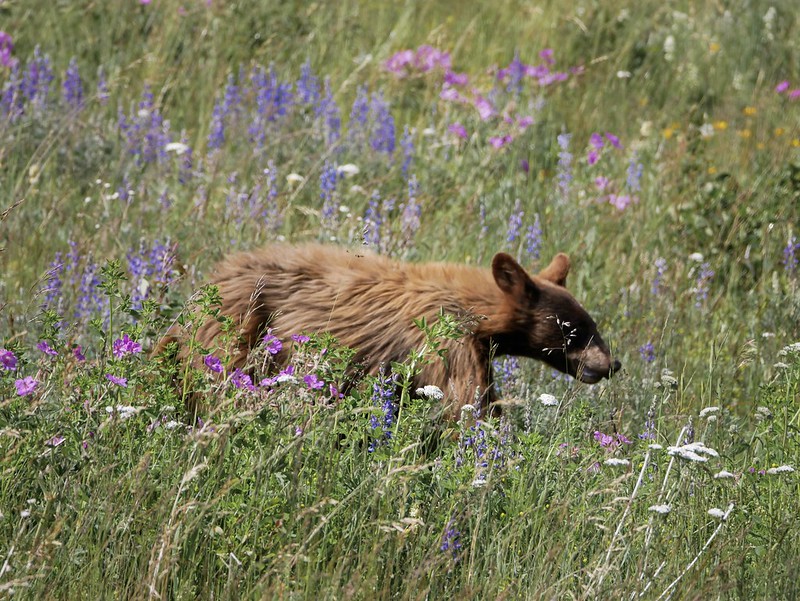