Idaho is home to more natural hot springs than any other state so we set out on one hell of a relaxing roadtrip to visit as many as possible.

After soaking in our favourite ones around Stanley for the previous week, we reluctantly left the high mountains and followed river carved valleys west. The first spring we visited was accessed along a short trail that led us to a steaming waterfall. It was a hot day yet the water was still steaming so we knew these were going to be damn hot. The water trickled down the rock face and meandered its way between dozens of man made rock pools. It all looked so inviting but the water was boiling hot and a simple dip of the toe had us running back to the shoreline. I guess if you brought a bucket along you could carry water from the river across to the pools. Luckily there was one pool right next to the river where the waters mixed and it was the perfect temperature. I actually enjoyed sitting on a rock in the river, right by the outflow of the pool so warm water flowed over me and the rapids rolled beside me. But we also found another little gem at this site – there was a rustic wooden shed atop a hill where a bath tub was sunken into the creaking floor. Crystal clear spring water flowed from a pipe straight in the tub and it was a lovely little place to relax. We ended up spending a few hours turning into raisins and then decided it was time to head to the next spring – Kirkham Hot Spring. 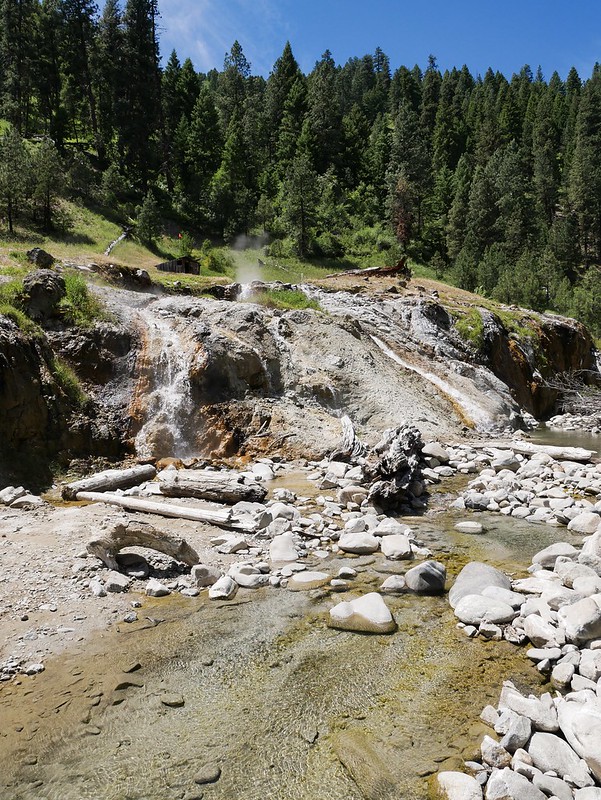 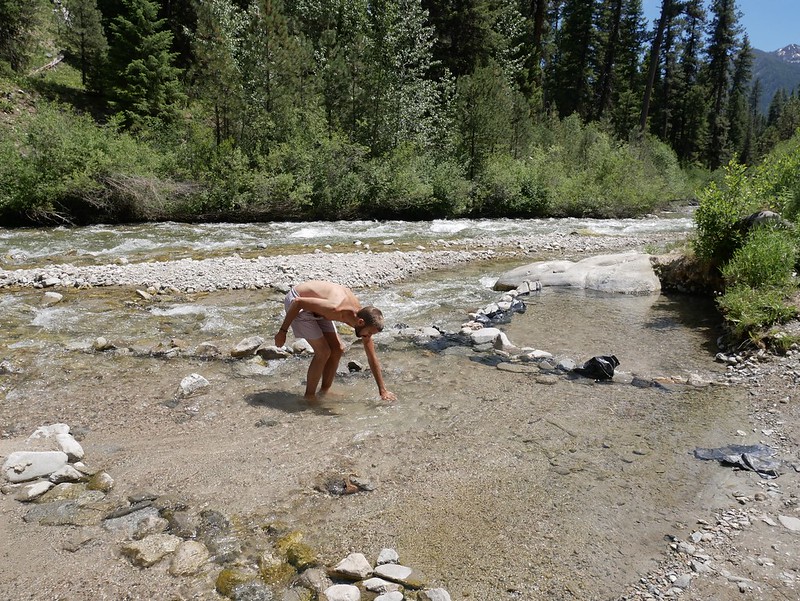 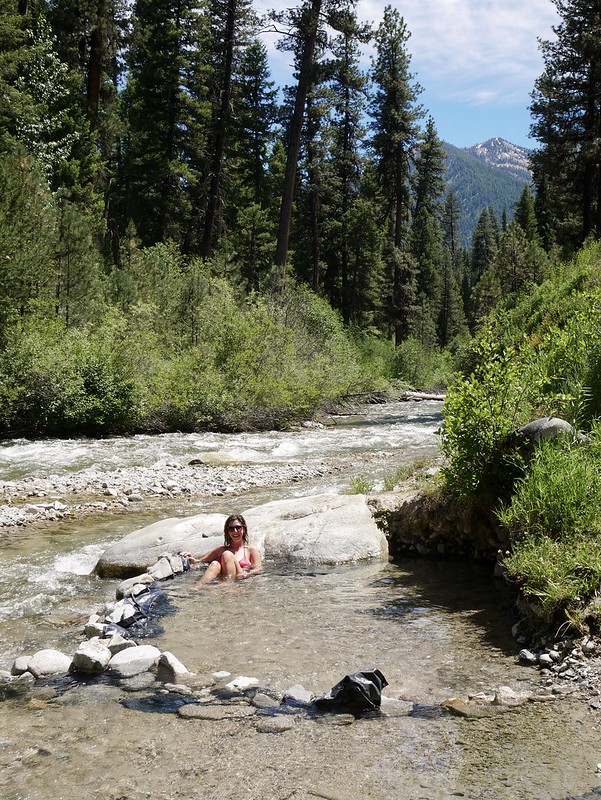 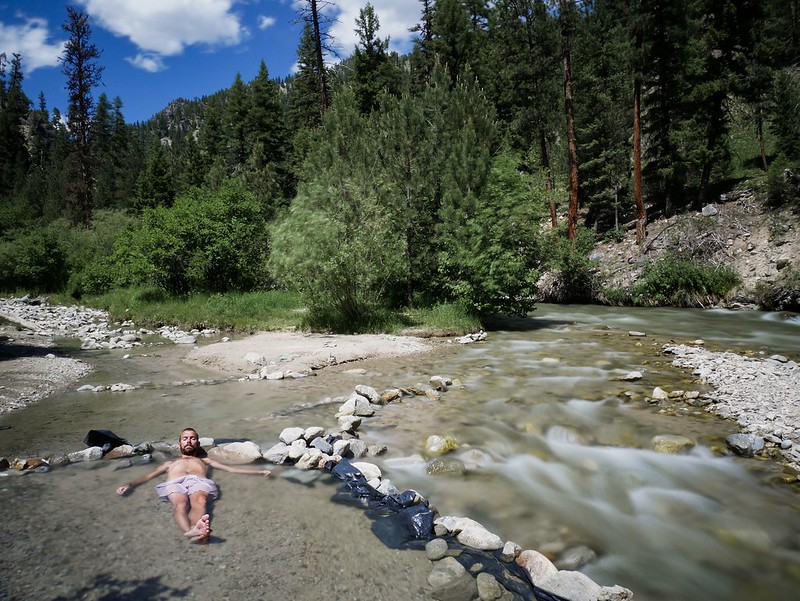 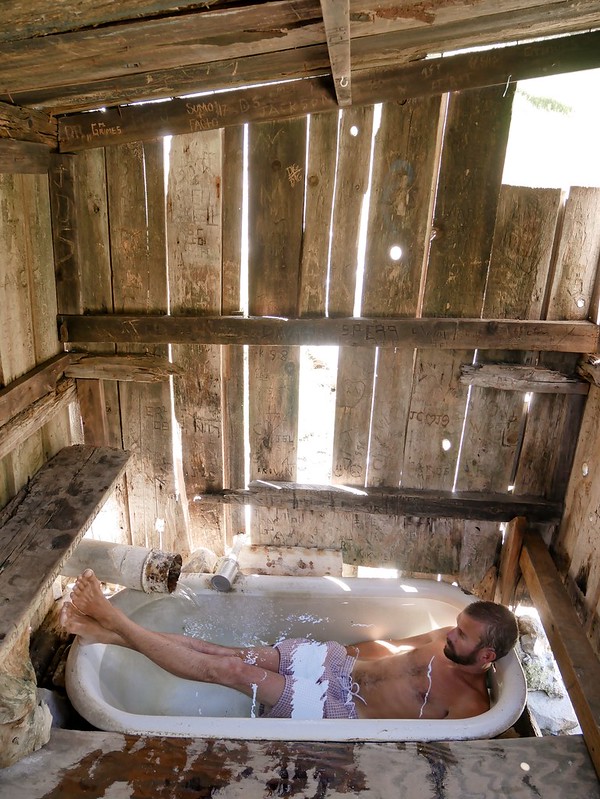 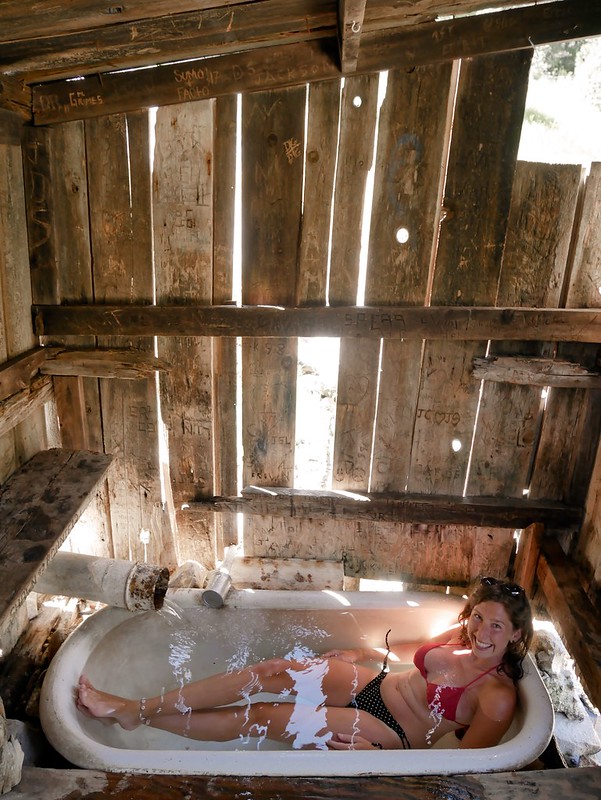 These ones are pretty well known thanks to them being a stones throw from the road and located in a scenic spot beside the river. The springs seemed to drip out of a rock wall like it was weeping and minerals turned areas fluorescent orange. The gentle waterfalls trickled down into rock pools and as idyllic as they looked, they just didn’t have the right temperature. Some were dripping cold water while others were boiling hot. We waded through a section of the river to reach more pools. They varied in temperature but we just couldn’t find the right one, they were all way too hot upstream but too chilly by the river. Craig moved around some rocks to block off the hot flow and we managed to enjoy a dip but after an hour or so we decided to head off. They were nice, and the unique weeping wall was impressive, but they probably got their popularity for the ease of access and cool photos as appose to them being a good soak. 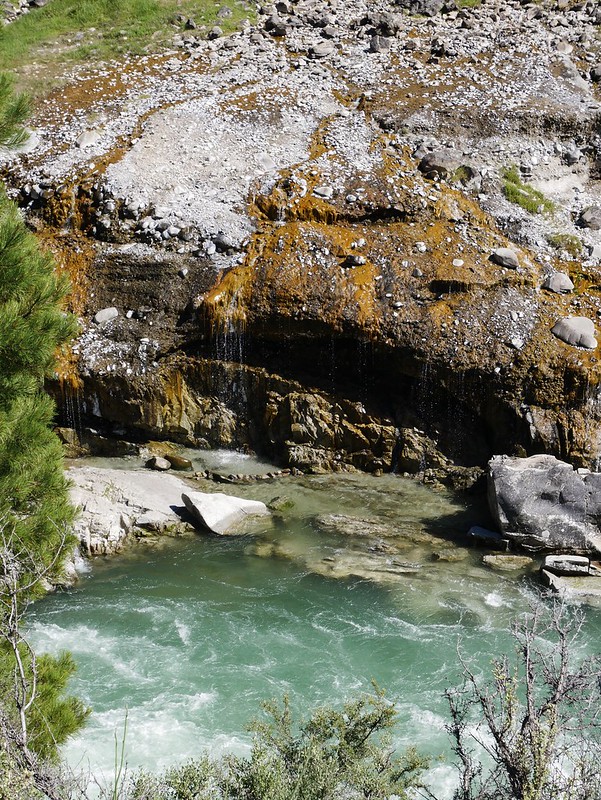 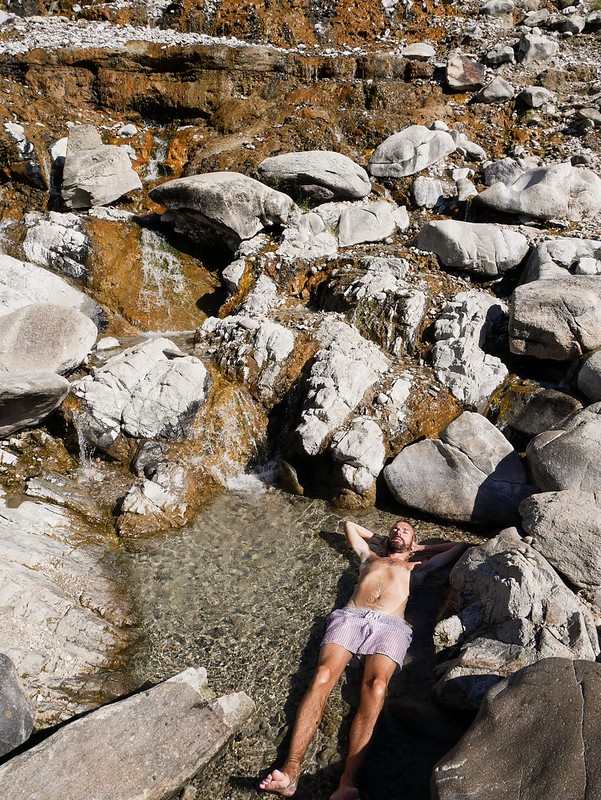 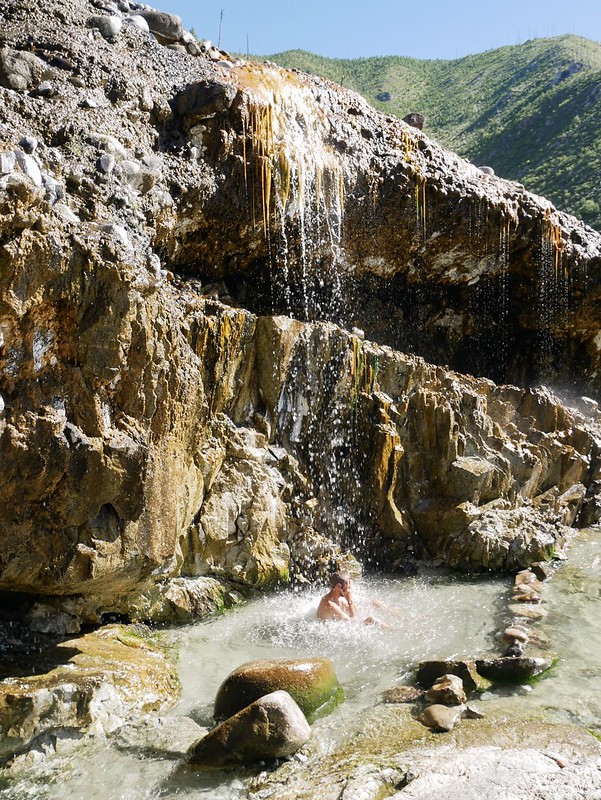 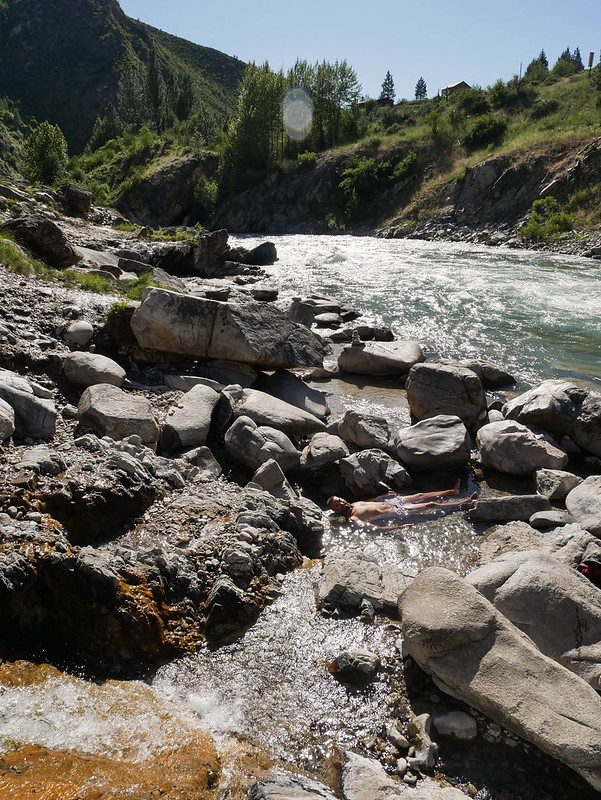 After a night camping atop a hill we started our day at the Pine Flats Hot Spring. It’s not signposted and we weren’t sure which way to access them so we ended up following a trail, although it’s legitimacy quickly became questionable as it seemed more like a sheep track down the mountainside. It was ridiculously steep and the ground just crumbled beneath our feet, but eventually we made it to the pools. The springs dripped out from the hillside into man made but natural looking pools which were almost tiered downhill towards the river. The bottom ones were washed out from the river but we found two others to soak in and the temperature was coming out like a nice warm bath. It poured with rain while we were inside which was lovely and refreshing and then we reluctantly went back up the hill to our van. If you visit this one take the campground route! 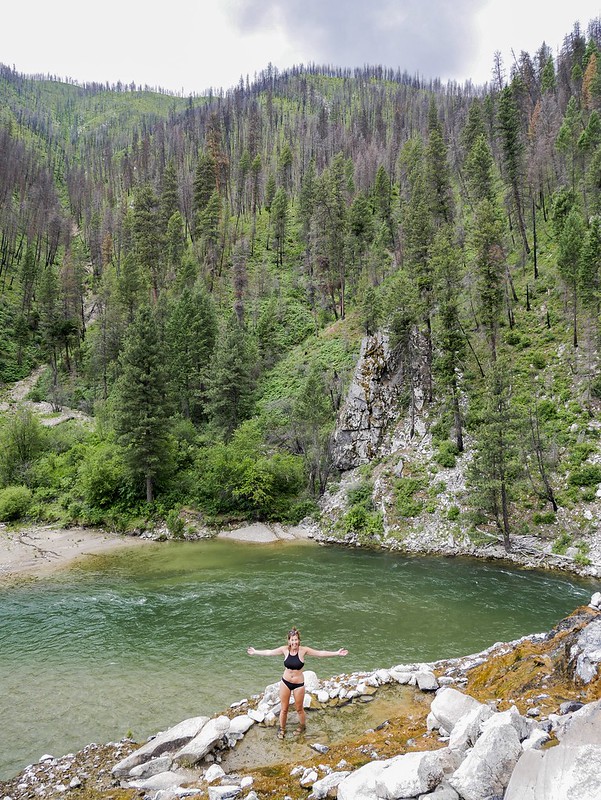 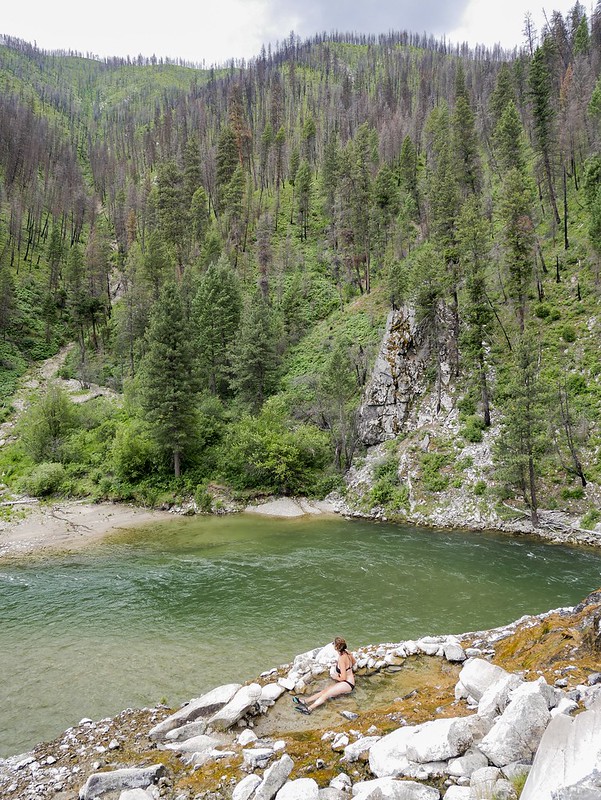 The hot spring trail went a little cold (excuse the pun) as we veered north but eventually a detour led us to Trail Creek Hot Spring. We were warned that this one was very popular so I guess we were lucky as a bunch of people left as we arrived and we had a whole pool to ourselves. It was just a short but steep trail to two pools right beside a creek. These hot springs were totally different to the others as it was quite developed, but still in a natural looking way. They used rocks and mortar to make the pools and there was a hot and a cold pipe, the hot remained on but you could turn the creek-flow on and off to get the perfect temp. Because they were such well built pools, they were also the deepest we’d been to and we could sit with just our heads poking out. 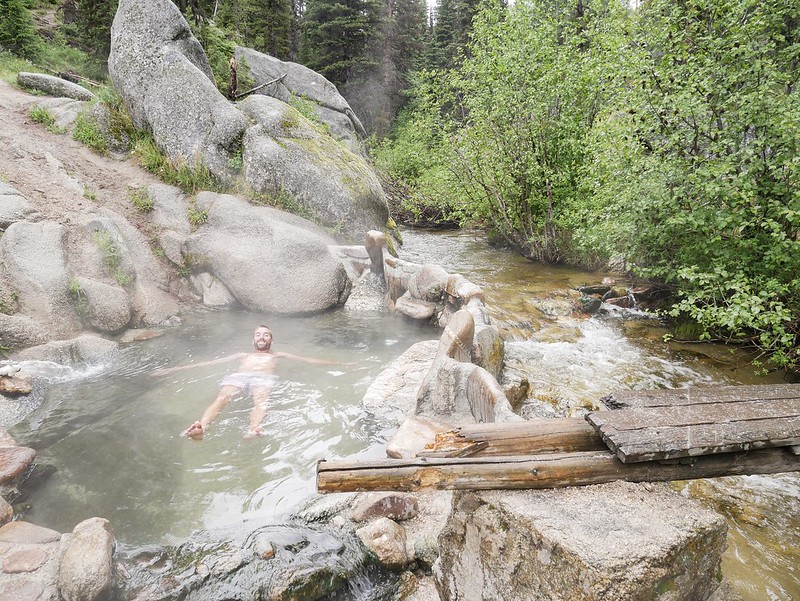 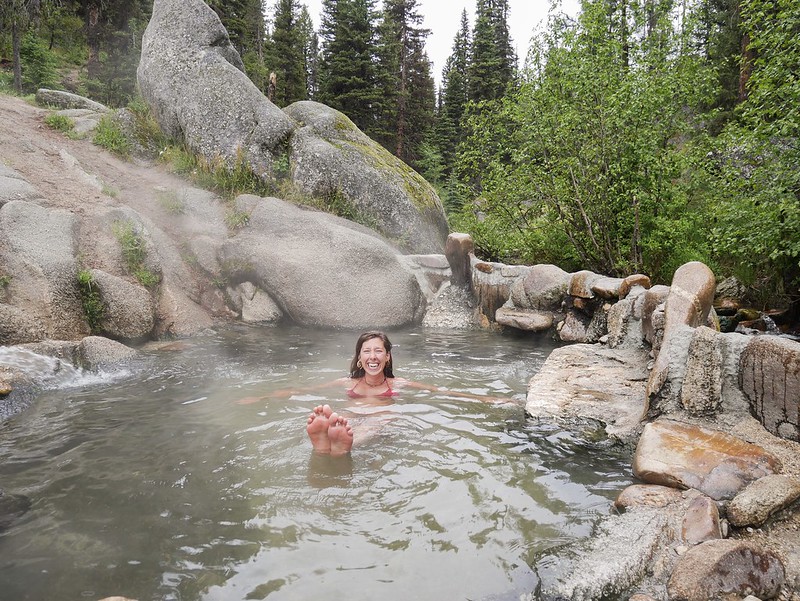 We spent a long while lounging in the deep water with occasional mini dunks in the creek to cool off. But it was getting onto dinner time so we decided to eat and then come back at dark, because the springs are so much more rewarding when it’s chilly outside. We bumped into a nice couple in the carpark and got chatting about the springs. They told us about one I’d seen online and said it was their favourite and not too far from where we were, so that was an option for the following day. The bloke loved our accents though and kept repeating what we said in fascination, as they walked down to the springs we could hear him trying an English accent and giggling with his wife.

It was a freezing cold evening and my feet were numb in the van so I couldn’t wait to get back in the hot water. This time we went to the other pool so we could compare the two. It was even hotter than the first one and I was struggling to get in as it was too hot for my feet. So I was a freezing cold mess, hopping in and out the water trying to get my body used to it. We enjoyed a couple of beers and then we heard people coming down the trail – lots of people. We’d heard that hot springs in general can be a bit of a party hub at dark, and this one was no exception. A group of lads filled the other pool and then the next load of people came into our pool. To be fair they were a nice bunch, but very young, like 18 to 20 and I don’t think I’ve ever felt so old before. They all introduced themselves which I’m sure you wouldn’t get with a group of youths in England. There were two lads working in the area who were nice and chilled but the four others brought along a goddam speaker and a huge cool box of beer. One girl loved herself and as she sat in the pool she squealed “oh my god! I forgot to take my shirt off!” Her ‘shirt’ was a boob tube over her bikini top! So there we were, looking up at the dark sky hoping for a tranquil soak, but it was impossible to drown out the noise of the girls who said things like “it’s so easy to twerk in the water!” and then they’d cause a tidal wave through the pool as they demonstrated. Then they blasted the country music up and sung along while I tried to focus on the sound of the creek behind me. We can’t stand country music, it makes my skin crawl with the sleazy lyrics and they are all about love or god. One song has the lyrics “my tractor really turns her on…”. While another sings “this is godssss country” so we find it funny to change the lyrics whenever we see a ‘your in bear country’ to “this is beaaaaar country”.

We didn’t stay too long with the young punks but we did get nice and warm before bed time and returned the following morning for one last dip. Sadly the kids thought it was necessary to light candles during their party so the pools had wax floating on the surface. We decided to head to the ‘best’ hot spring according to the couple we met and it ended up being quite a mission to get to. The drive took about an hour and went high up a valley wall with a raging river below us. We were told to look between two mile markers for the springs but we literally couldn’t find them anywhere. We drove up and down the road, and then we parked up and walked some faint trails. 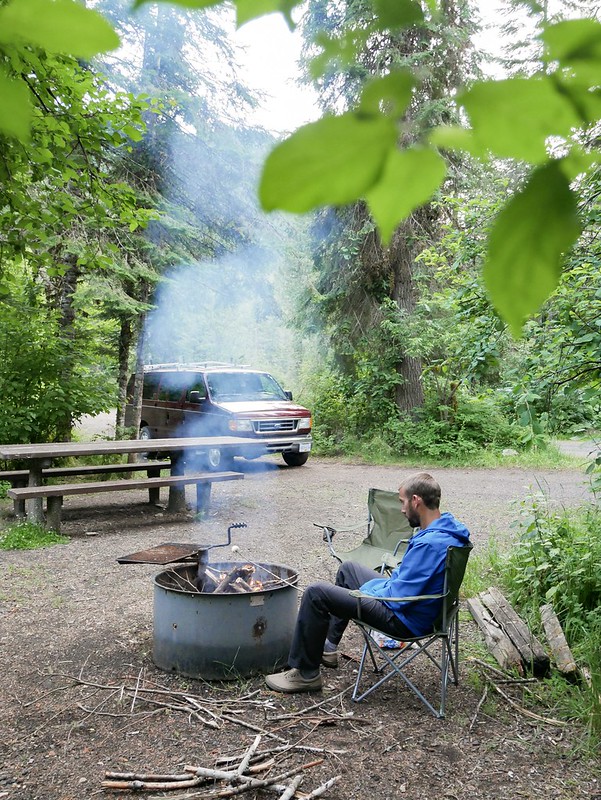 We didn’t know how trodden the trail down would be so we ended up on some pretty bushy tracks to the river. On one trail I spotted what looked like a metal grill to my right, like a rustic camping area but as I walked closer Craig called me back, and then I saw it – it wasn’t a grill, it was the rib cage of a deer carcass and we didn’t know if a bear was in the area so we carefully moved away and headed straight for our van. We spent about an hour searching between the one mile section and found nothing, so we headed back a bit to the previous mile post and low and behold, there it was. It was so obvious but the description they gave really had us chasing the wrong scent. Wooden steps and a packed dirt track led us down to the rivers edge where a lone pool awaited us. The water was twinkling a lovely aqua colour so we could definitely see the appeal of it, especially with the remote setting, but we couldn’t help but feel we’d found better ones that didn’t take two hours to reach. But they sure were right about having the place to ourselves! 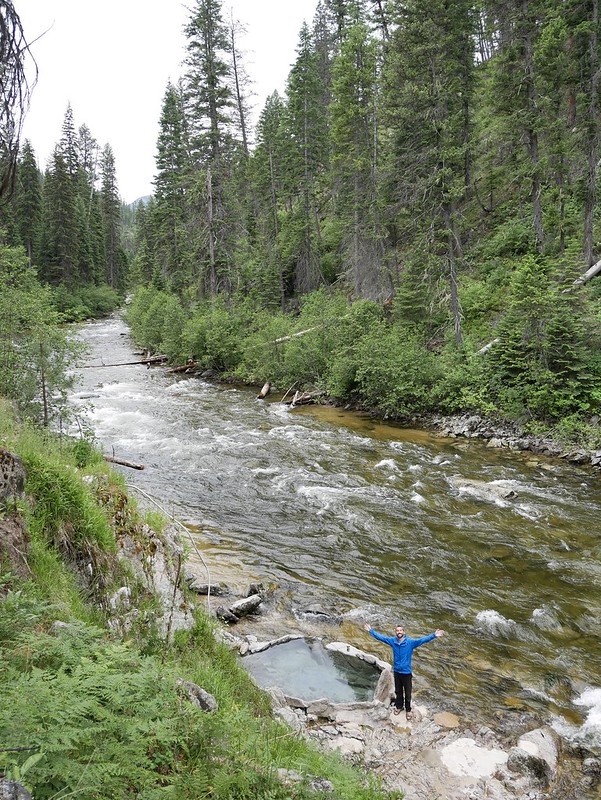 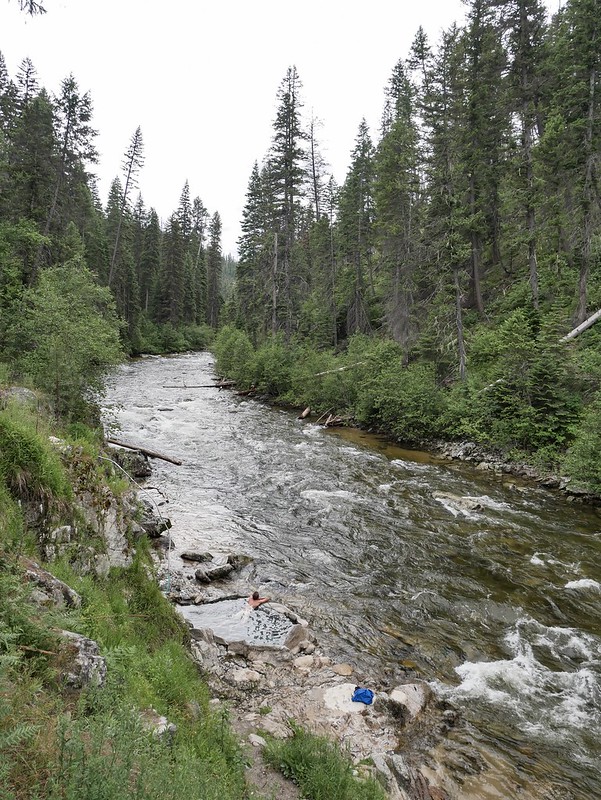 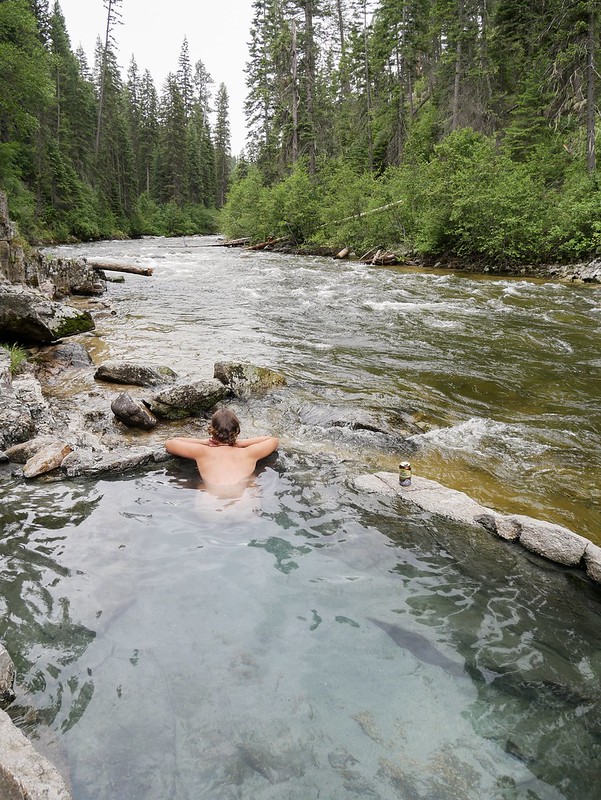 The roads became busier as we made our way north east towards Montana so when we arrived at a full carpark at Weir Hot Spring we decided to give it a miss. Further up the road was Jerry Hot Spring which is said to be one of Idaho’s most popular, but as it has multiple pools we gave it a go. A two mile forested trail led up to the pools but the first few were washed out by the river. Further up the trail were more pools that were inland and available year round. One looked like a silty mess but the final pool proved to be quite nice, set in a meadow with a forested perimeter. It was a large pool, not very hot but we somehow had it to ourselves and the crowds seemed to come as we left. 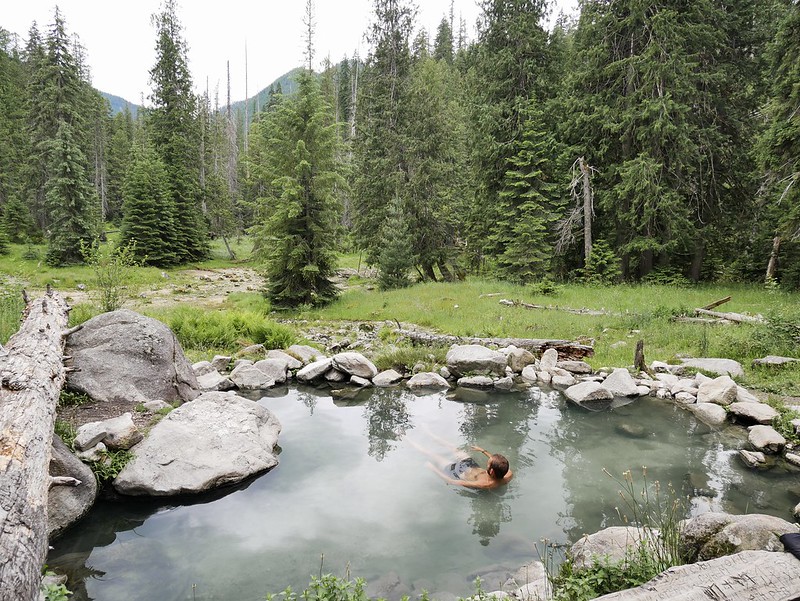 It was our last hot spring in Idaho and after four days enjoying hot baths we had to say goodbye to the good life. We certainly have our favourite spots in central Idaho still but it was nice to try some new ones.