Yellowstone is one of our favourite National Parks and it’s easy to see why with the abundance of wildlife and colourful volcanic activity. The route from Grand Teton to Yellowstone’s southern entrance led us through a large area of blackened tree stumps. The wildfire that caused the huge burn had only just been put out as we drove that same route in 2016. It was a bit of a disastrous year for wildfires and we had quite a bit of smoke looming in the air. The trees were still charred but the lush grass and flowers were beginning to make an appearance on the forest floor.

The southern route got us straight into the parks volcanic basin where boardwalks led around the fragile features. It’s the most colourful area of the park thanks to the thousands of hot springs that dot the landscape. Rain water and snowmelt seep down into the earth and become superheated before returning back to the surface through cracks and settling in the open hot springs. But the truly impressive part is the colour of these pools which come from heat loving microorganisms. The brilliant aqua coloured centre of the pools are just above the underground source so their the hottest parts or up to 90° and it’s too hot for microbial growth. But as the water cools around the edges the microbes form and they are different colours depending on the temperatures. 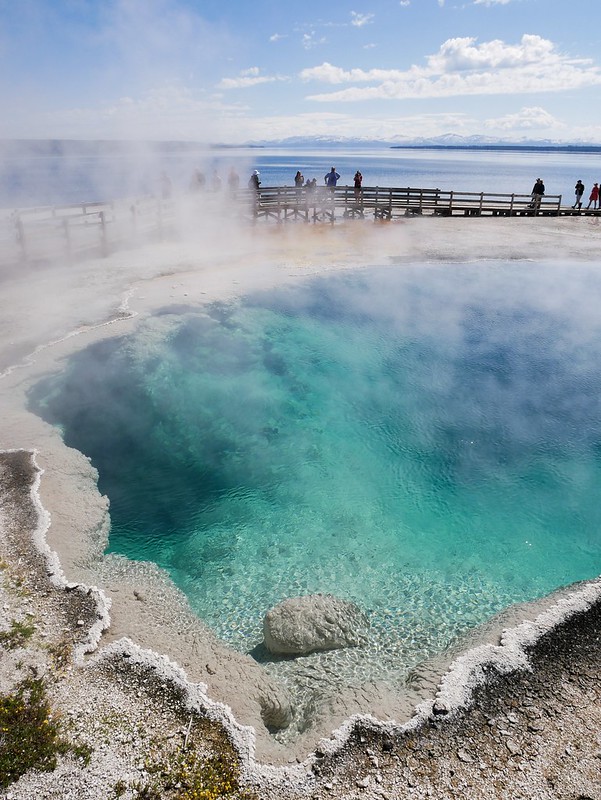 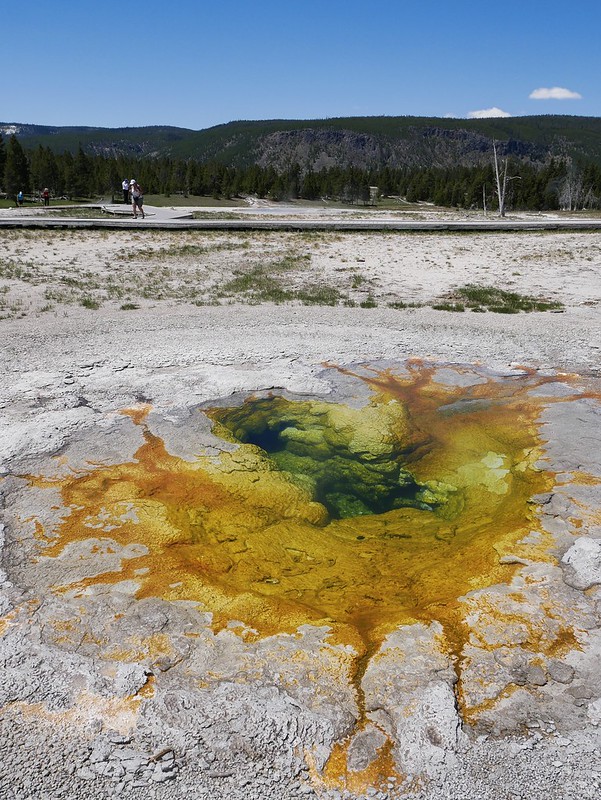 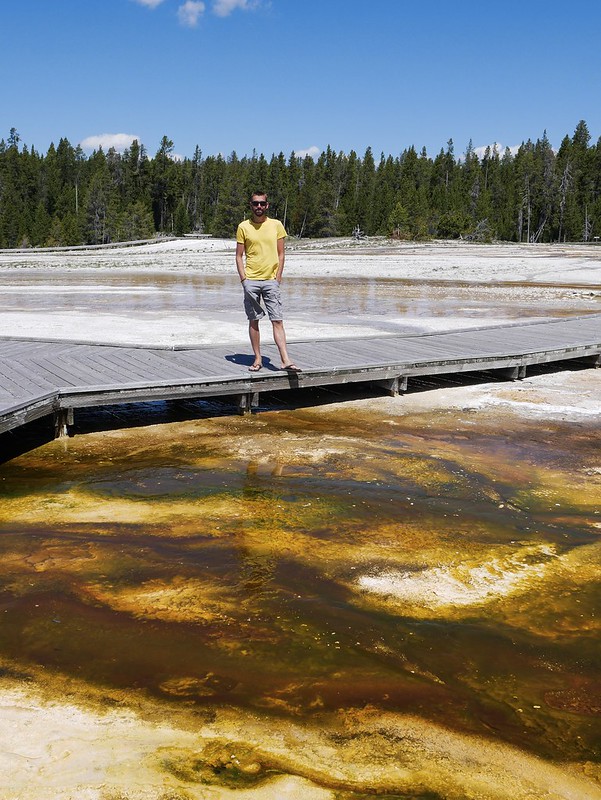 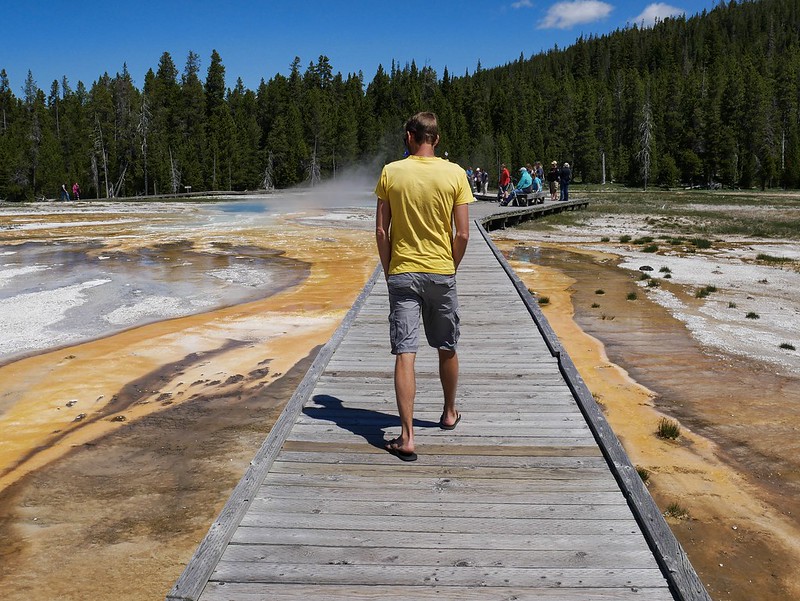 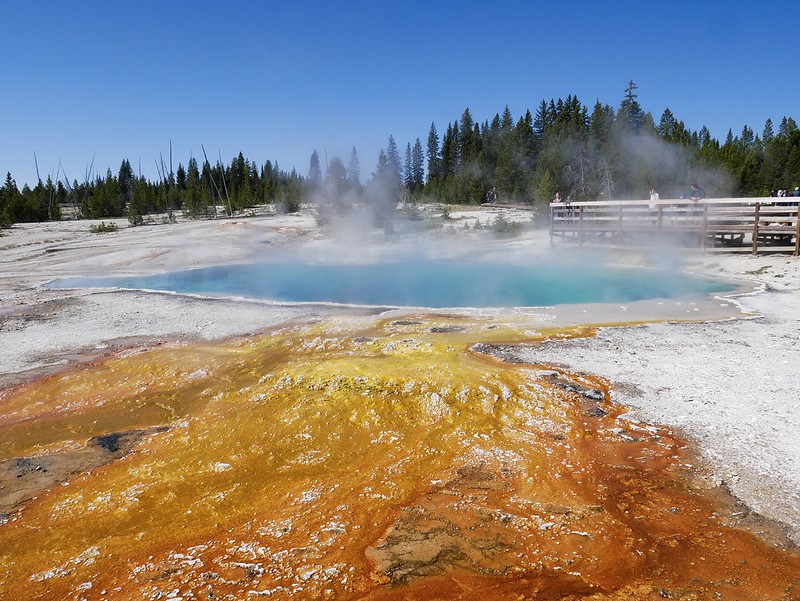 We watched the Old Faithful geyser gather a huge crowd of people as she projected steaming water 140ft feet high. We’d seen it before, in fact we were revisiting a lot of the same sights but it was just as impressive seeing them all over again. Volcanic steam drifted across the road and some carparks were roped off due to hot vents. Boiling water spilt over rocky walls and landed in icy rivers while mud pits bubbled violently. 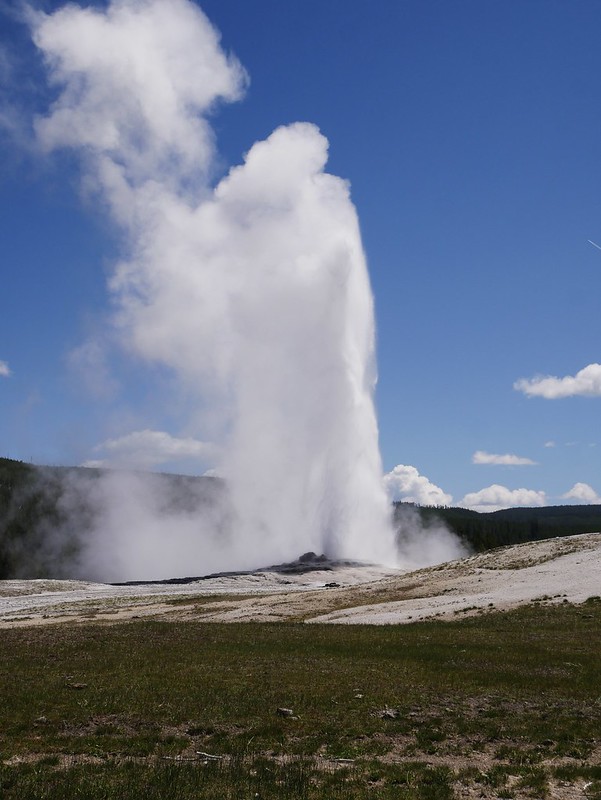 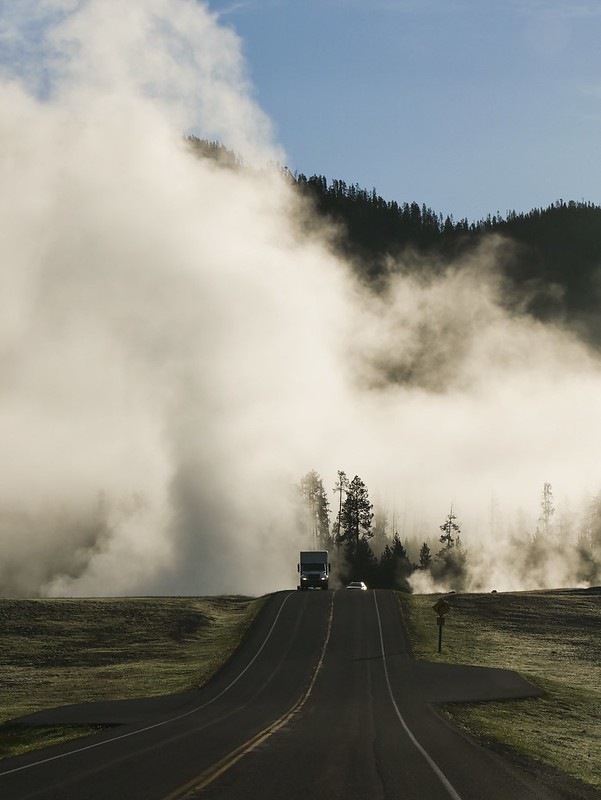 Grand prismatic hot spring is probably Yellowstone’s most famous feature, and rightfully so – it’s the largest hot spring in America and the aqua blue pool has wild orange edges swirling around it like a child’s illustration of the sun. When we visited the spring a few years ago we were shocked to see so many caps and hats laying on the fragile volcanic ground beside the boardwalk. It’s obviously a pretty windy area and sadly there was no improvement on this visit as we walked past half a dozen caps and were disappointed that the park hasn’t banned them for this walk to save the extreme hassle of trying to remove them without damaging the ground. A couple walking near us were commenting on the hats they saw “oh no there’s another one…” and then the ladies cap blew off and landed two meters away from the boardwalk. I literally slapped my face with frustration….YOU FOOL I thought. The worst thing was she didn’t care about the fragile area it had landed on, she was just upset about losing her hat, and then I shot her some daggers when I heard her say to her boyfriend “ah man, I knew that was gonna happen”…if you knew then why didn’t you just take the damn hat off and put it in your bag?! Anyway…we managed to get a much better perspective of Grand Prismatic than last time by doing a short hike behind the pool. It led up a hill to a viewpoint that we had no idea about it on our last trip. The view was incredible, who needs a drone when you get vantage points like that ay? 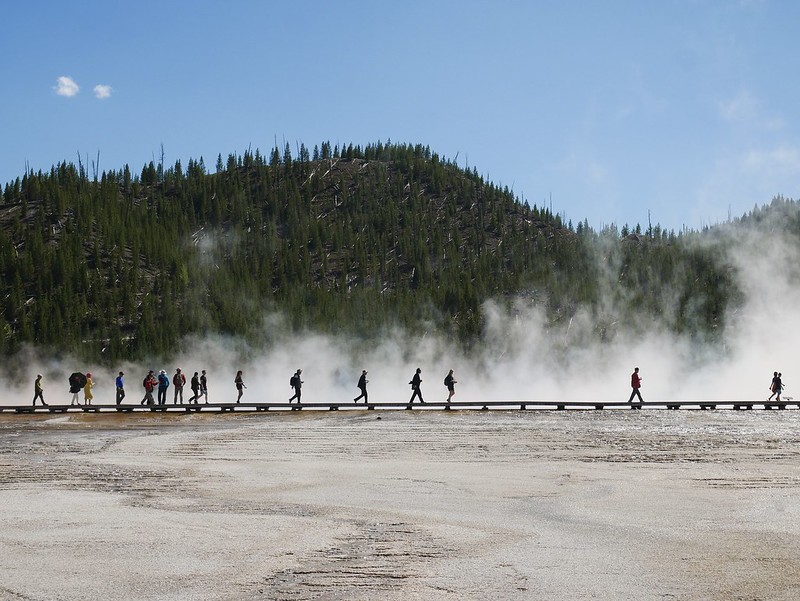 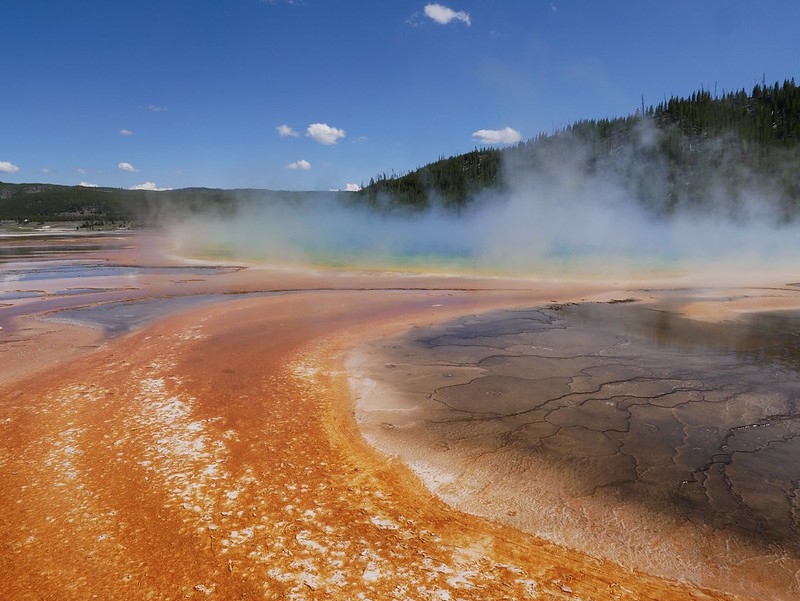 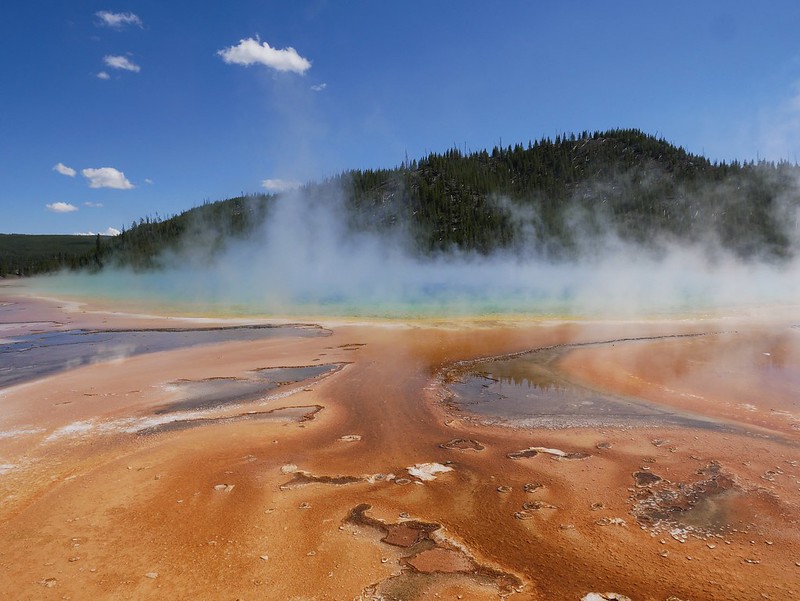 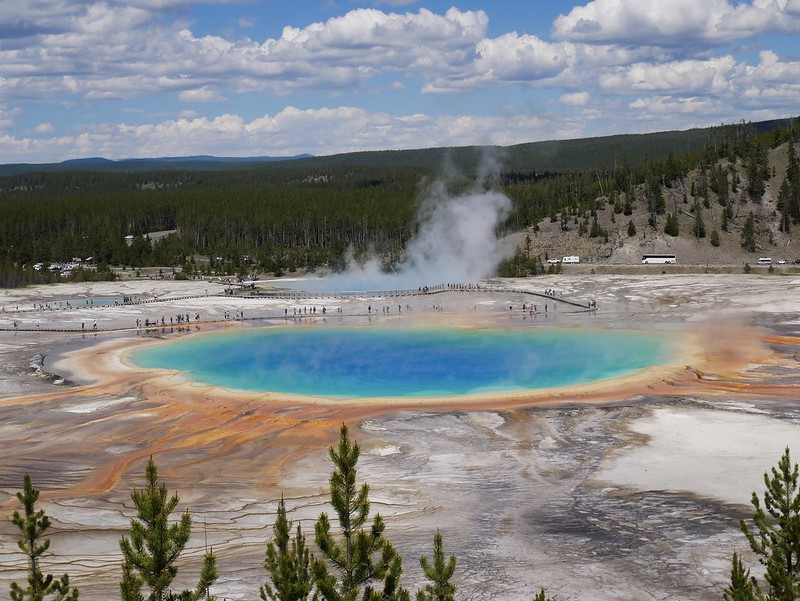 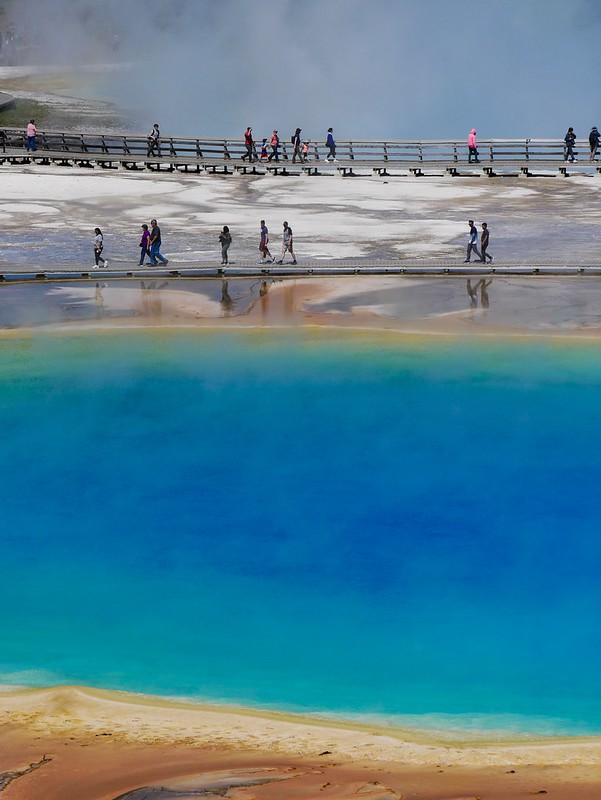 We were wiped out after a full day driving, stopping, walking and repeating. We pulled over for tea by a geyser and then made our way towards the west exit. It was dinner time so we decided to stop in an empty carpark and cook dinner with the hope that some wildlife would wander through the meadow. Well, we lucked out as a whole herd of female bison with their young calves ran down the road, into the carpark where we were and then across the meadow. It was incredible and such a delight seeing the tiny calves with bright orange fur, all fluffy and fresh beside their gigantic, beastly mamas. That bison herd ended up moving back onto the road and caused a huge traffic jam for over an hour, but everything cleared up by the time we left at dusk. It was the perfect end to our first day back in Yellowstone. 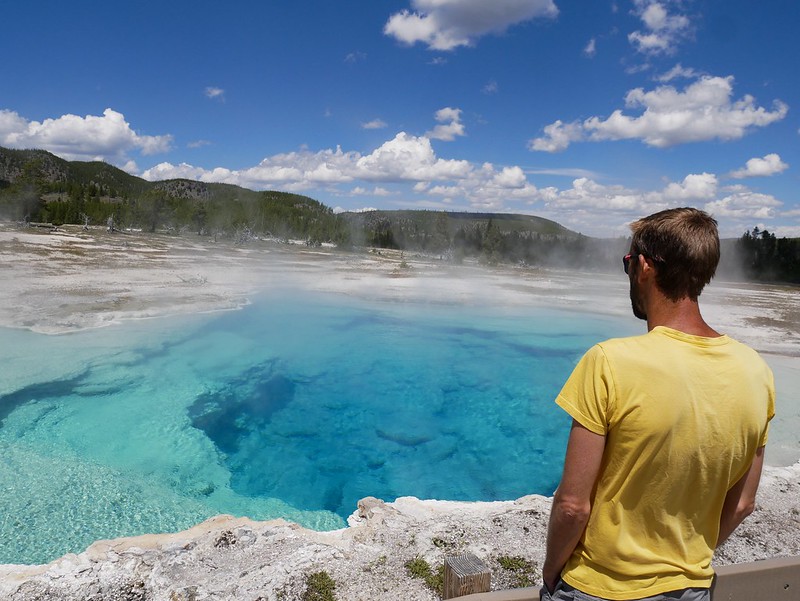 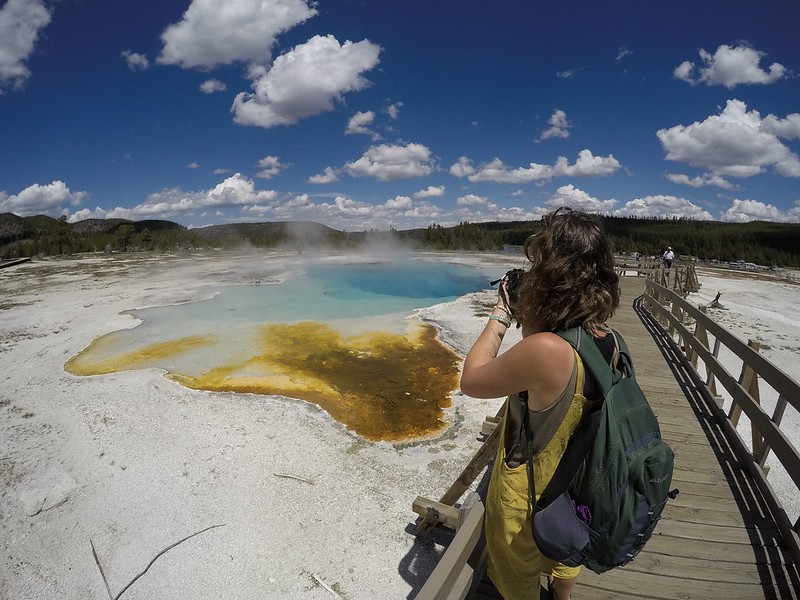 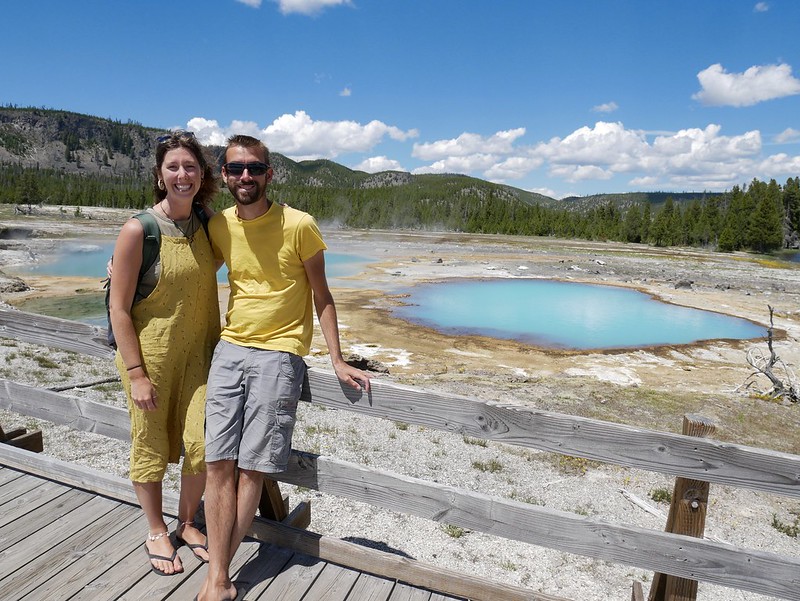 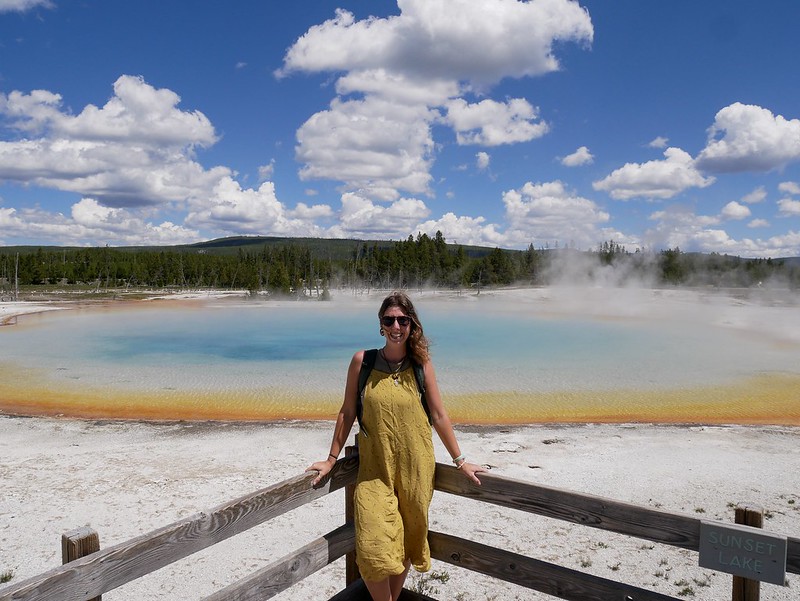 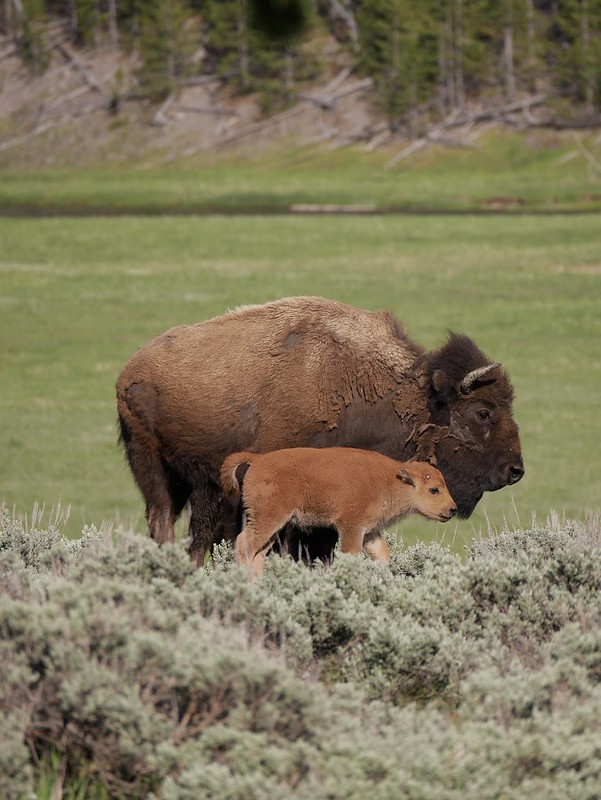 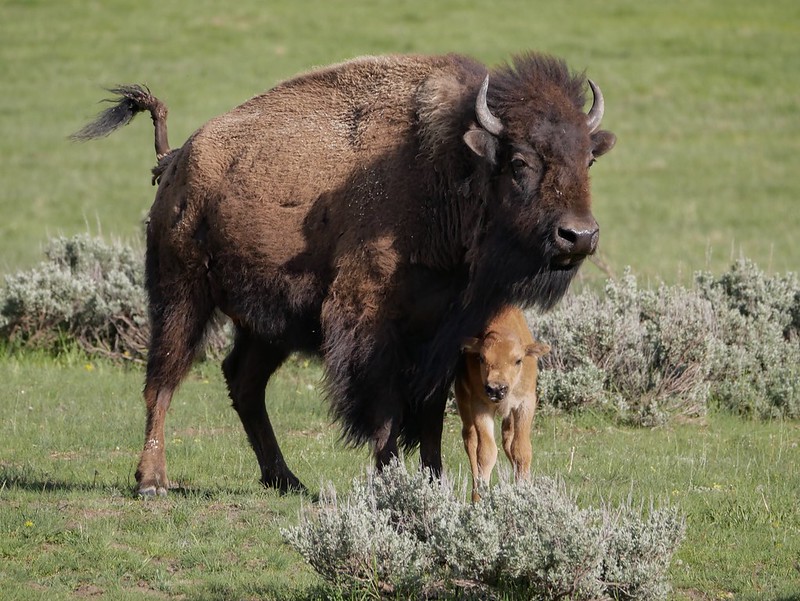 The following day our alarm woke us earlier than we’d of liked, but we had to make the most of every morning in Yellowstone to increase our chances of wildlife encounters. We actually had a rather unsuccessful pre-breakfast drive with just a few distant elk only visible with binoculars so we continued north to Mammoth Terraces. It’s a pretty unique area with terraced pools spilling down the hillside like melting wax on a dripping candle. 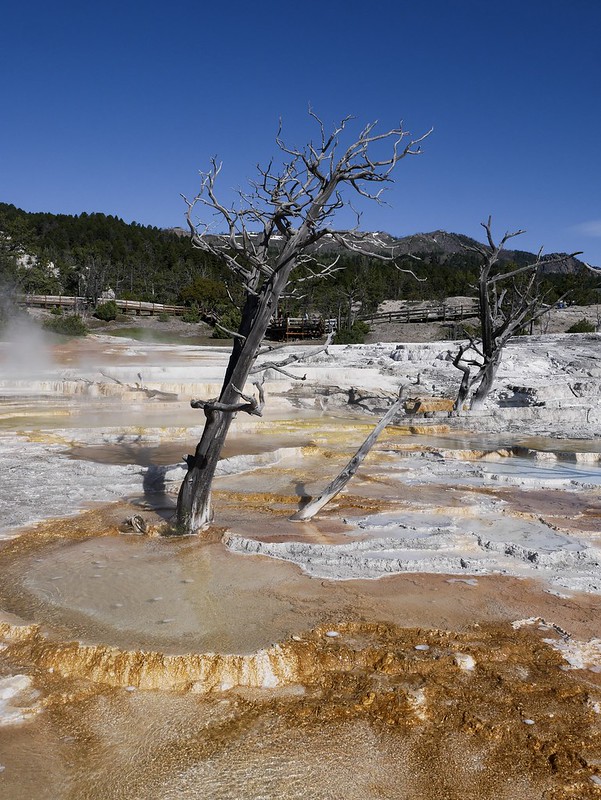 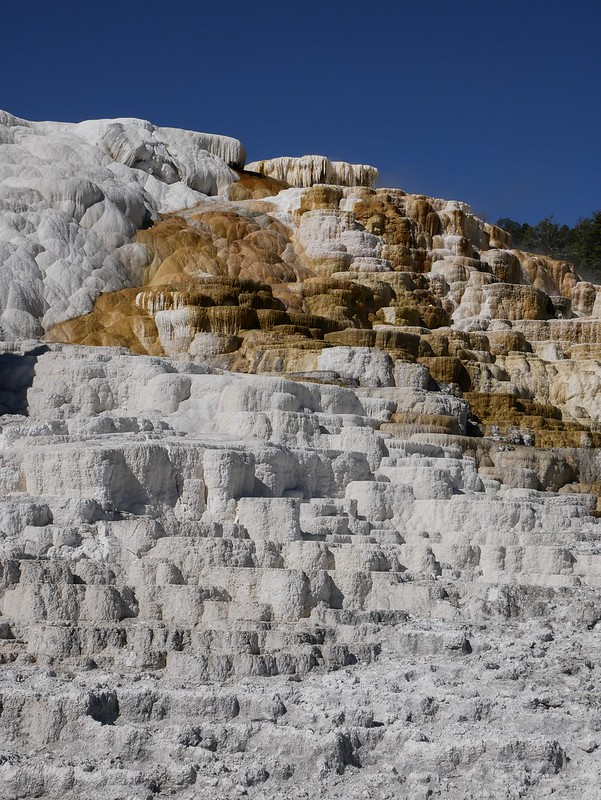 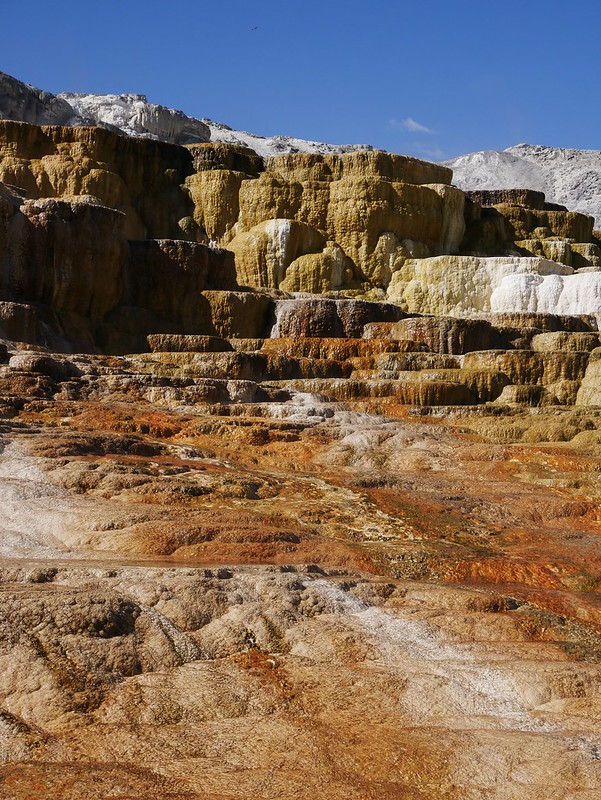 As we walked around the boardwalk we came across a sign advising people to give animals space. It was an odd place for the sign so we knew there had to be wildlife around and to our right we spotted an elk with a very newborn calf that she was licking clean. She was quite far from the trail so we continued on to the next sight and then headed back to our van. As we walked away we noticed the elk had left her baby and was grazing closer to the boardwalk. We watched from afar as groups of teenagers found it hilarious to run in front of the elk, trying not to get attacked by the animal and encouraging their peers to do the same. The poor elk was getting so distressed trying to protect her baby, she was rearing forward in a charging motion but she kept turning back before making impact. I don’t know why the park didn’t have a ranger controlling the situation or why they didn’t just close that part of the trail off. 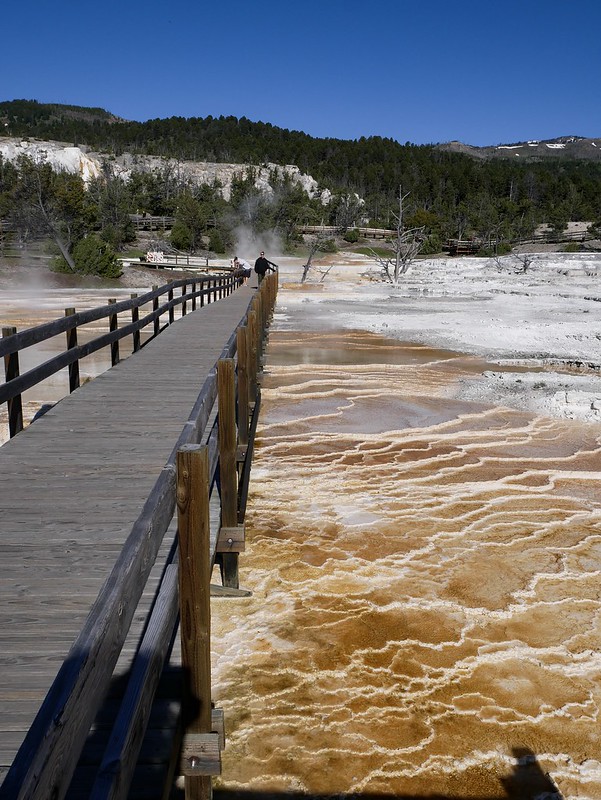 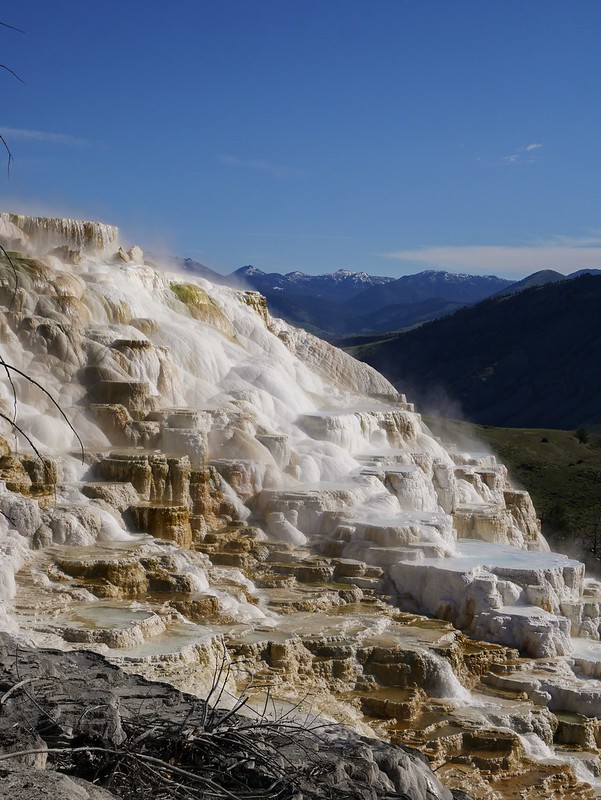 A scenic one-way loop road led around the top of the terraces so we continued around but we ended up getting stuck behind a lady driving like a snail with a tank on its back. We drive slow but this car was barely moving and worst of all the driver would slow almost to a stop when going up hills. We eagerly awaited the first pullout for her to pull over and let us pass but when it came the driver just stopped right in the road. It was ridiculous so Craig decided to go into the pullout to actually undertake the car but as he did the driver opened her window. The culprit was a 70 or so year old lady who’d driven all the way from Texas and what came out of her southern mouth shocked us “I don’t need no push…don’t you see my Texas plates, I COULD BE PACKIN’!”. Then she did her window up before I could respond which was a shame because I really wanted to say something witty back in a really posh English accent. She did speed up afterwards so it turns out she did need a push. Craig and I were shocked though, did we really just get threatened with a gun by an OAP?! It’s kind of the image a lot of foreigners have of Americans and their obsession with guns, and we’re forever defending them as we find them to be some of the friendliest folks in the world, except for that old cow, she was a bad bean.