There was a long, lonely stretch of road as we left Moab, Utah and headed north. We saw more pronghorn antelopes than humans and towns looked like they’d been left behind in the 70’s. Dinosaurs once roamed the area so we stopped to see a quarry that had been excavated and revealed over 1500 fossilised dinosaurs bones. We crossed the border into Wyoming at Flaming Gorge which I was really excited to see but low-lying cloud and even snow sabotaged our view. We found a nice beach as a big black cloud was dispensing rain and in the sand beside our feet were huge animal tracks. We’re pretty sure they belonged to a cougar but we never saw the culprit, in fact that’s one American animal we are still yet to witness in the wild. 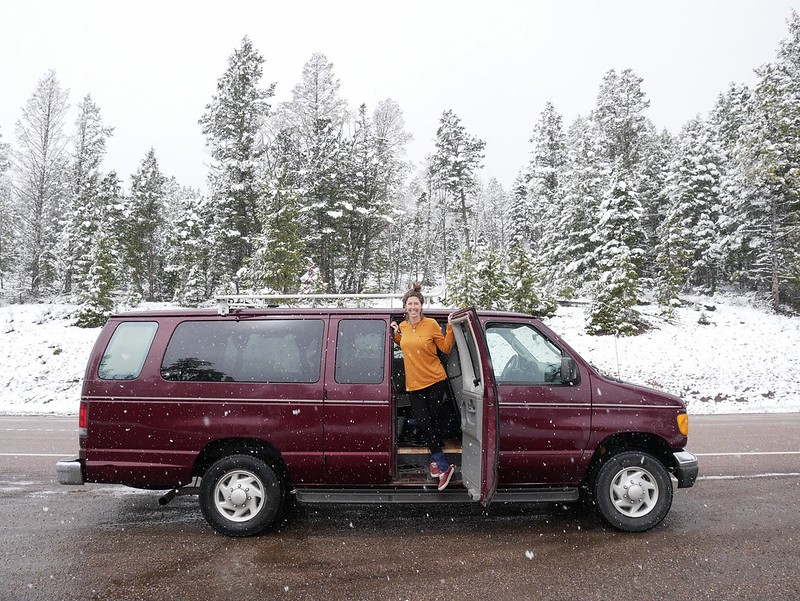 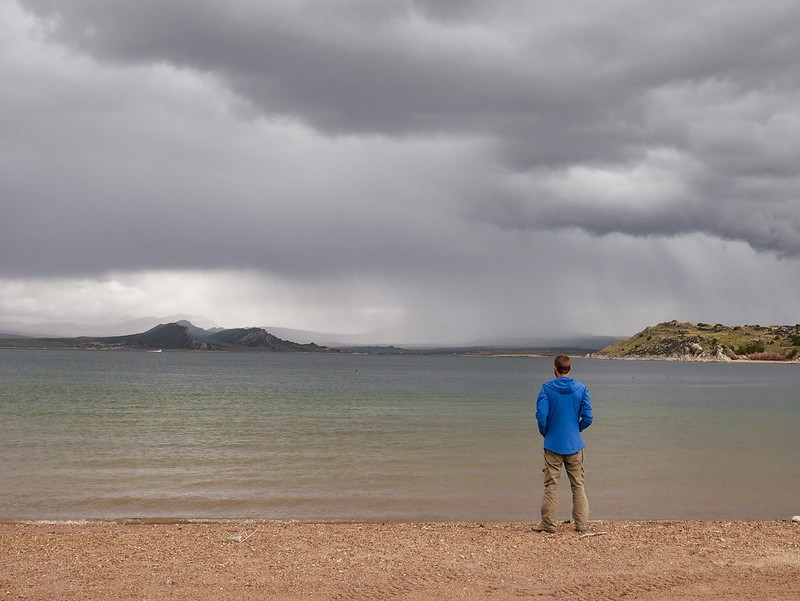 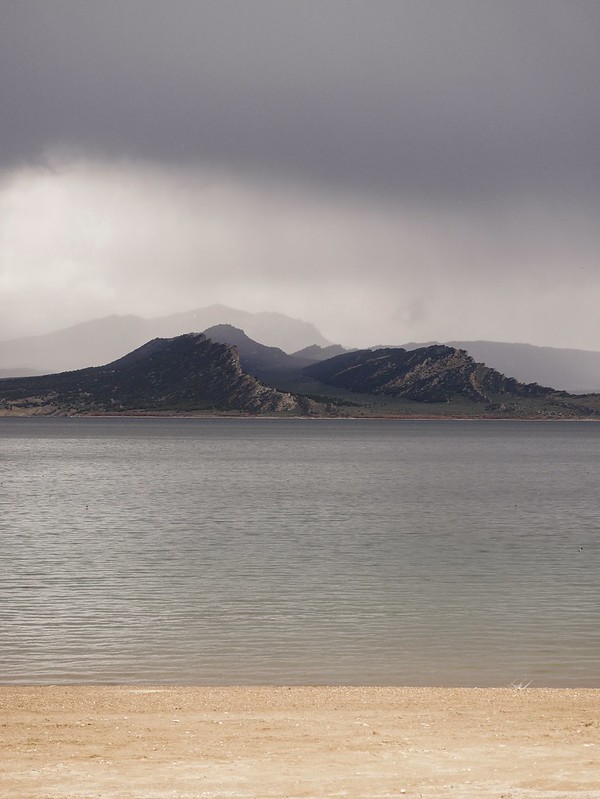 Tourism in Wyoming sticks around its famous national parks but we wanted to see the real Wyoming and were told the Wind River region was exactly that. We had the opportunity to see the area back in 2016 but it was a big detour so we decided to leave it for another time…and here we are. Sadly, unlike last time when it was the end of summer and would have been ideal hiking weather, we arrived to a mountain range caked in snow. It was a shame as there are great hikes in the area but without snowshoes and a lot of energy, hiking was off the cards. A ranger recommended some places we could still access so we set off on a dirt road towards a lake. The beginning section passed many ranches and every local we drove by gave us a jolly wave or tilt of their cowboy hat.

The lake area was completely undeveloped and we found the most idyllic spot to camp above the lake with a fire pit. There was moose skat everywhere so we did a little walk at dusk and all we found were lots of ticks. I flicked one off my leg and knowing they are pretty hard to kill I got a lighter and burnt the fucker. Then to be sure I scooped him onto a stick and placed him in the fire pit which Craig said was pretty extreme until he had one on him and realised they literally wear body armour and are un-squishable. 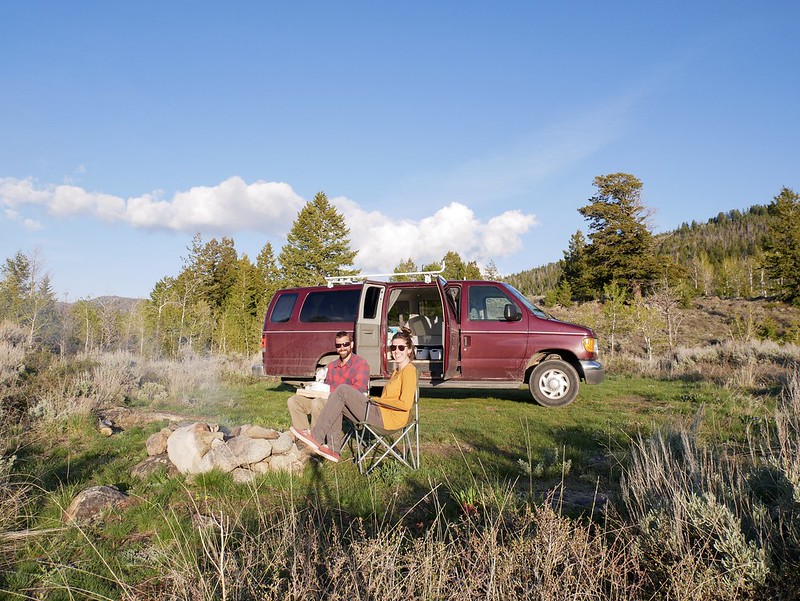 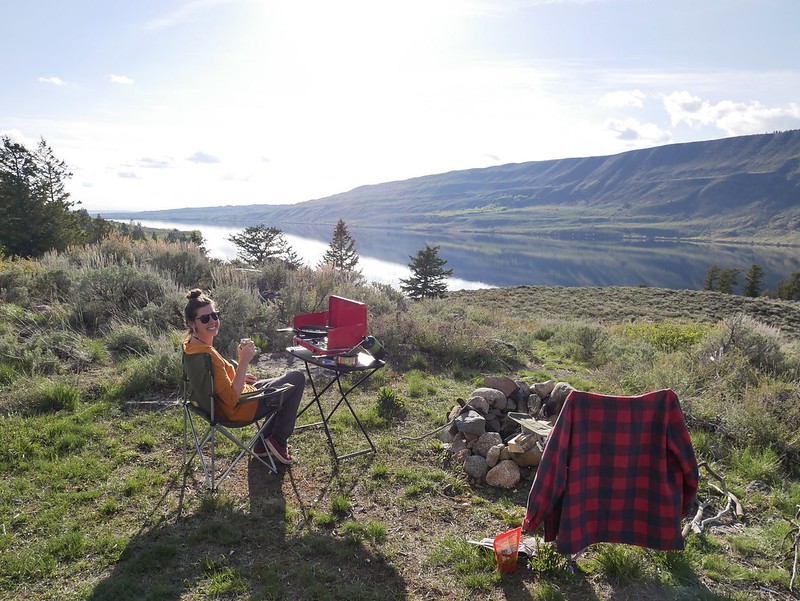 The following day we decided to do a hike up to Blueberry Lake. It was a bit of a climb up a muddy section that was filled with deer and moose tracks but absolutely no human prints so we really felt like we were in a truly wild place. As we approached the top a large female elk spotted us and darted into the woods. The lake itself wasn’t very impressive as the forest blocked the snowy mountains behind but the tranquility was wonderful. 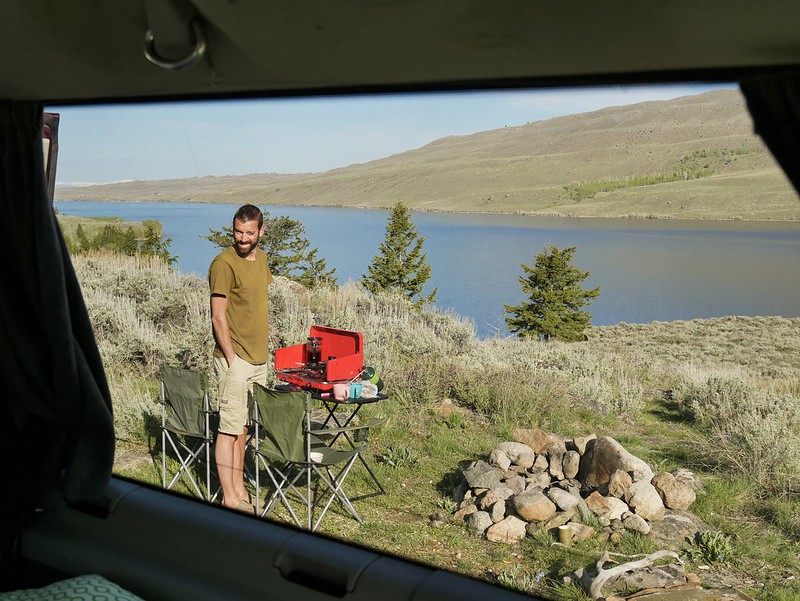 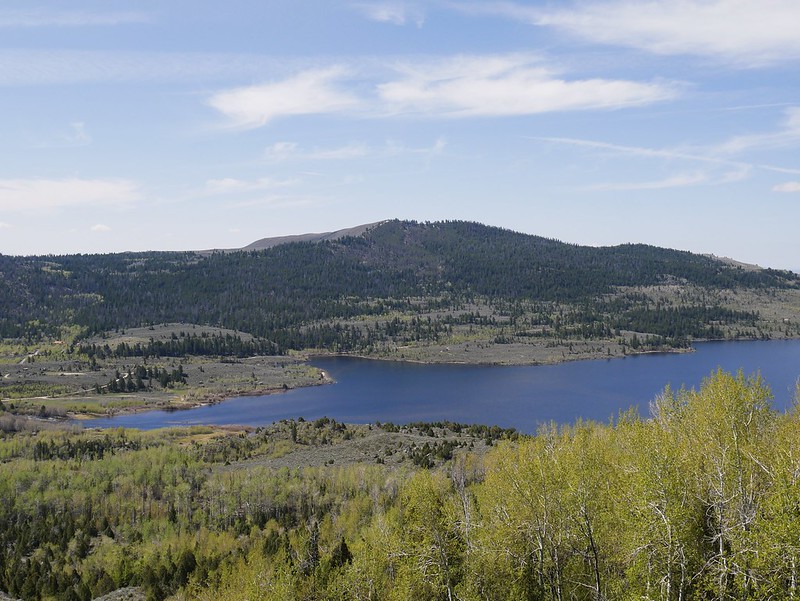 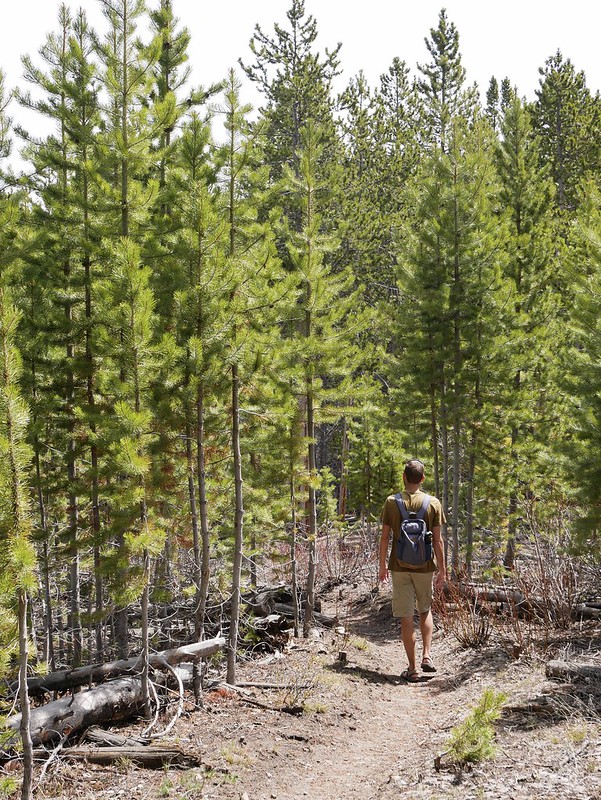 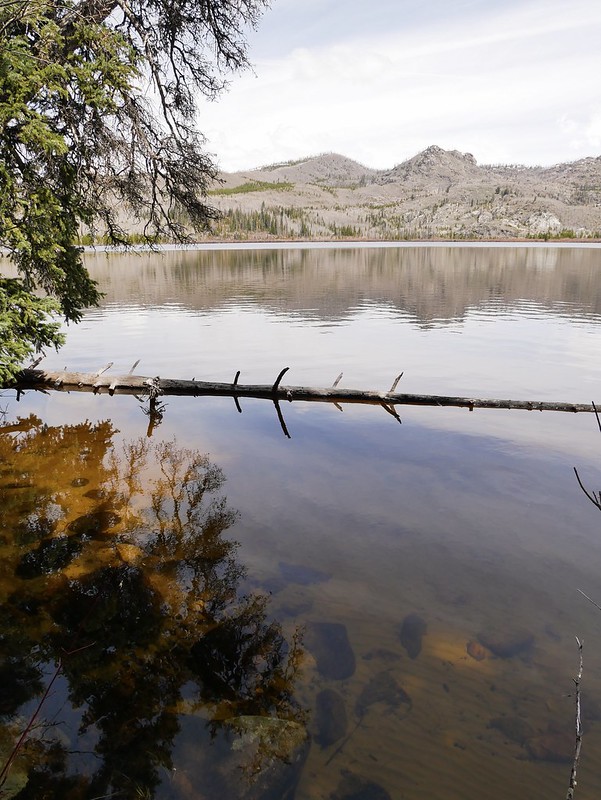 After a couple nights camping in paradise we headed to Pinedale where a paved road led up towards the mountains. Some people told us it was closed while others said it was open and clear of snow so we had to give it a go. Technically it was open…but the top part just turned into snow. We drove along some patchy sections until it became too deep and we pulled over to hike the remainder. Skidoo tracks gave us some solid ground to step on but at some point the snow changed and we fell a foot or two down on every step. It was too long of a hike to persevere through so gave up. We still got some amazing views down to the big blue lakes and we spent the afternoon paddling in Roland the boat but it ended up being a much windier trip than expected. The lakes were crystal clear and perfect for a summers day spent lazing on the white gravel but just not when we visited. 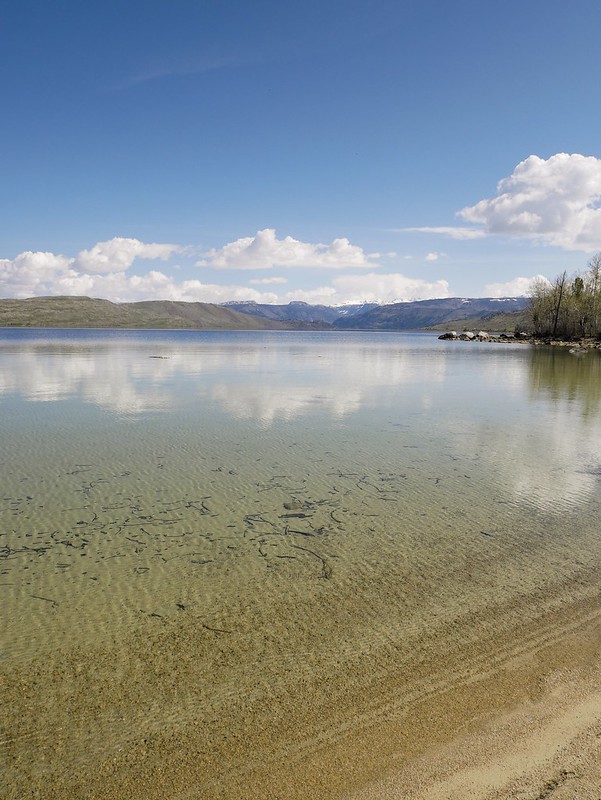 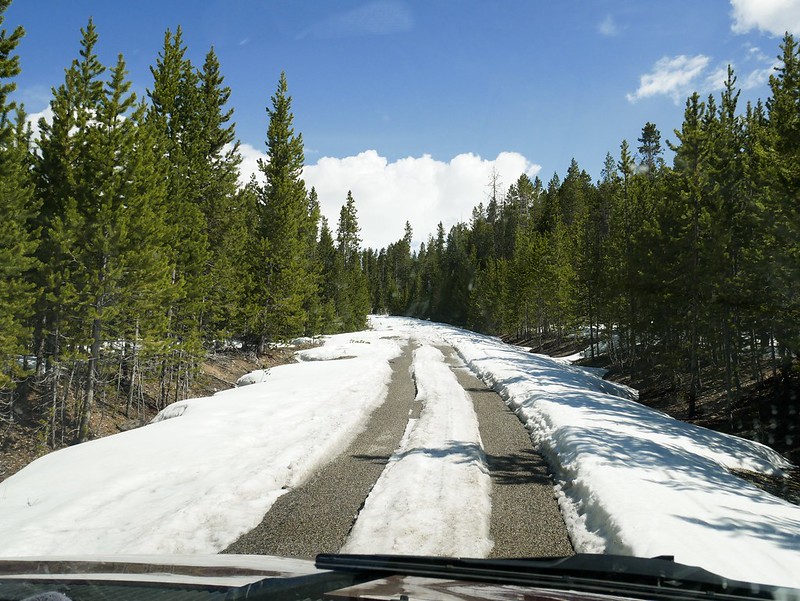 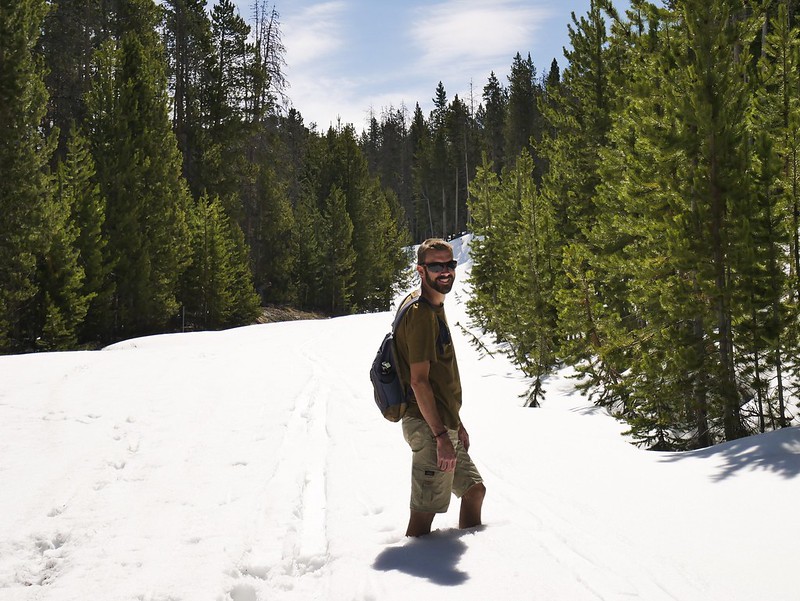 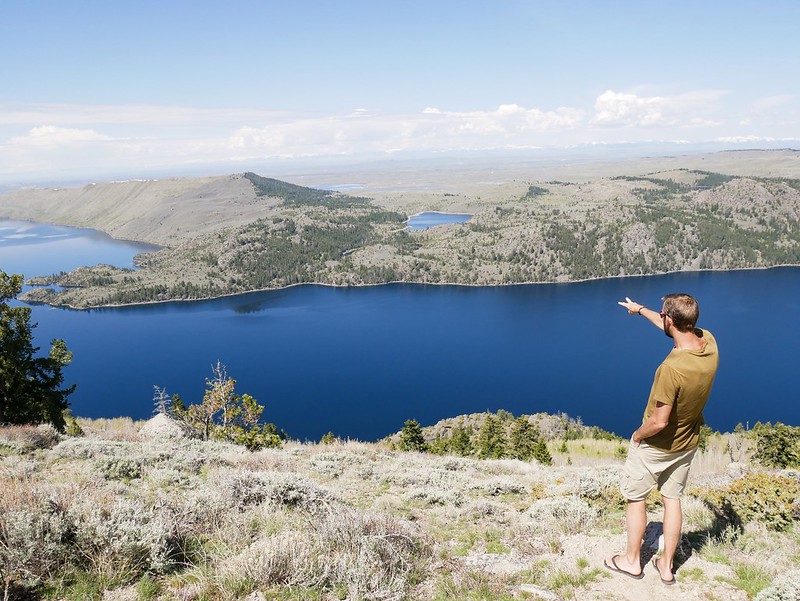 While driving up and down the road we saw plenty of mule deer and pronghorn antelopes but the moose remained elusive as usual. A short morning walk led us around ponds where the air was filled with the sound of ribboting frogs and tweeting birds. We might not of made it into the high mountains and wilderness but we sure enjoyed our time exploring the wild foothills. Now it’s time to leave the tranquil haven and head to the big national parks – Grand Teton and Yellowstone!