Moab sits in one of the most idyllic locations in America with the Colorado River meandering through the landscape and carving deep canyons along its way. The extremely popular national parks of Arches and Canyonlands are in Moab’s backyard and they’re what draws the huge crowds to the area. But there’s so much more to see than just the parks and the area is surrounded by public lands with plenty of desert hiking and that’s why we returned, to check out some lesser known spots.

We started with a very scenic drive down the 128 which travels alongside the Colorado River. Menacing storms followed us as we drove to our first trailhead, but the heavens opened when we pulled up at the carpark. We had lunch in the van while we waited for the storm to pass over and soon enough blue sky and sunshine replaced the black clouds. We were hiking the Fisher Towers trail which takes in some spectacular red rock formations. They really did tower above us and they had a bizarre texture to them, almost looking like giant pipes to an organ. The morning rain was still evident with thin trickles of orange water running through the clay floor but things were drying out quickly. 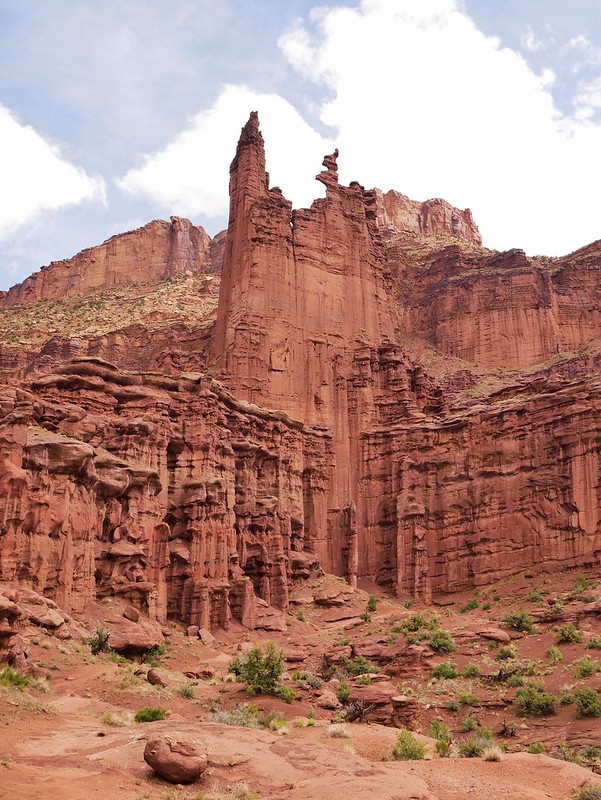 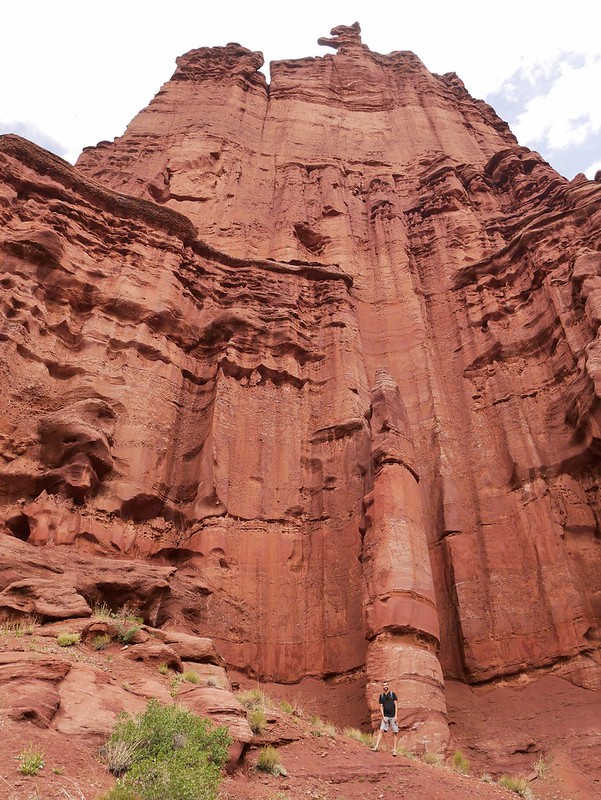 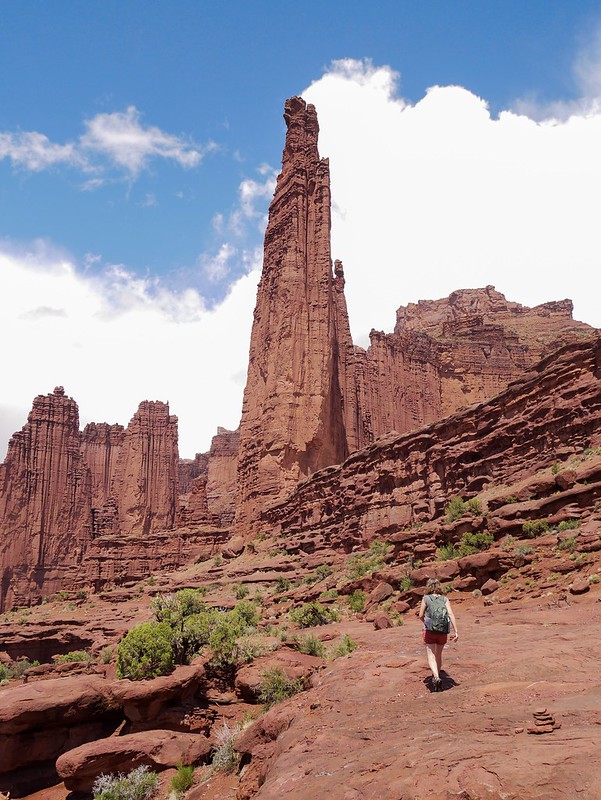 As we approached the end of the hike we had two more storms coming up fast. I figured we wouldn’t make it back to the car park before they arrived but we gave it a go. Loud claps of thunder filled the sky and big bolts of lightning sparked through the dark clouds towards land. We were hiking as quick as possible but when the giant drops of rain began falling on our heads we took cover under an overhanging rock. It formed a little alcove where we stayed dry until the rain became so heavy that a stream flowed beneath our feet. Then the droplets of water were rolling over the edge of our shelter and along the ceiling towards us. We could see the waterline spreading our way until it became too much and a flow of water streamed down towards us like an open tap. 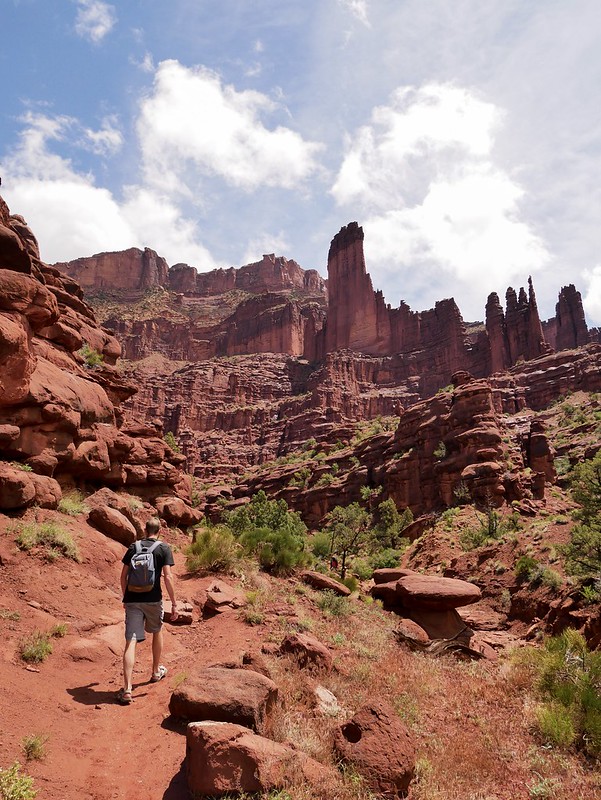 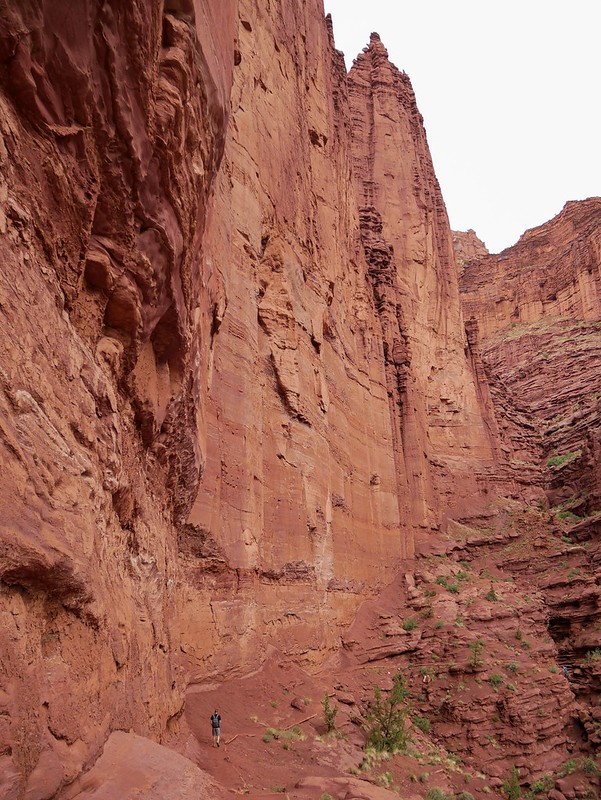 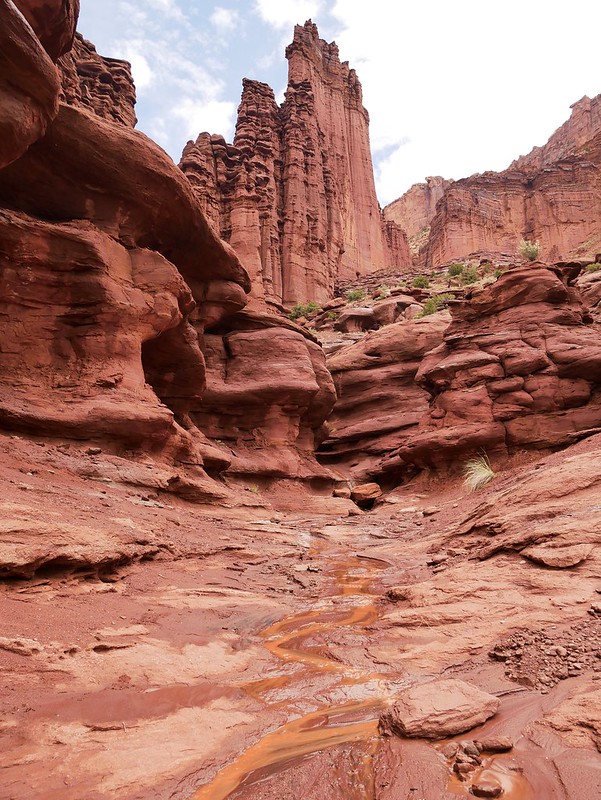 When the rain and lightning eased we continued our walk and this time it wasn’t just a trickle of water rolling through a normally dry wash, it was gushing streams everywhere that were stained by the desert sandstone. The walk was fun though and the scenery nothing short of what a national park could offer so we decided to try some more while in the area. Some were popular and led to grand natural arches while others were full of blossoming cacti flowers and pure solitude. 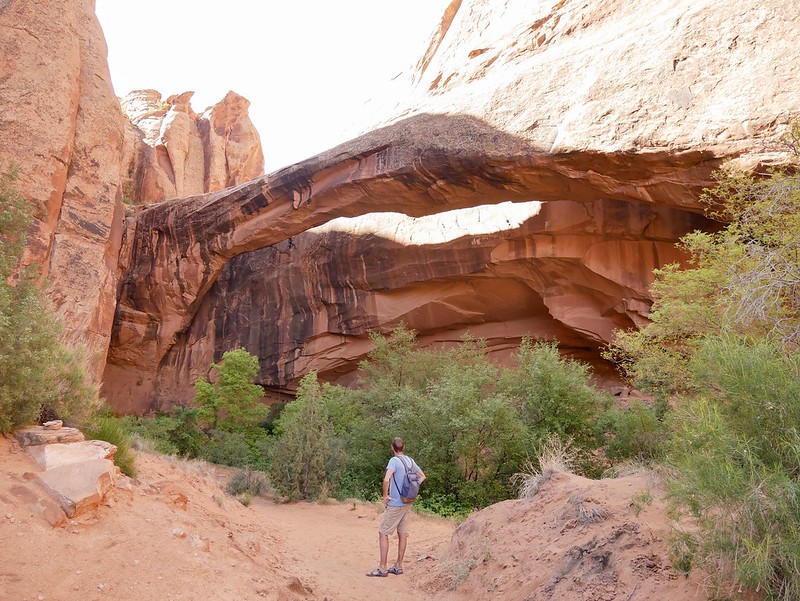 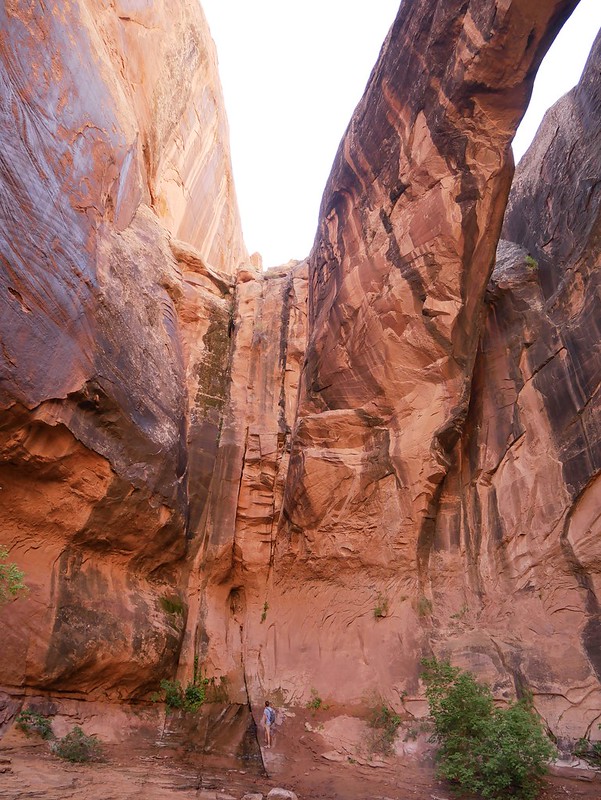 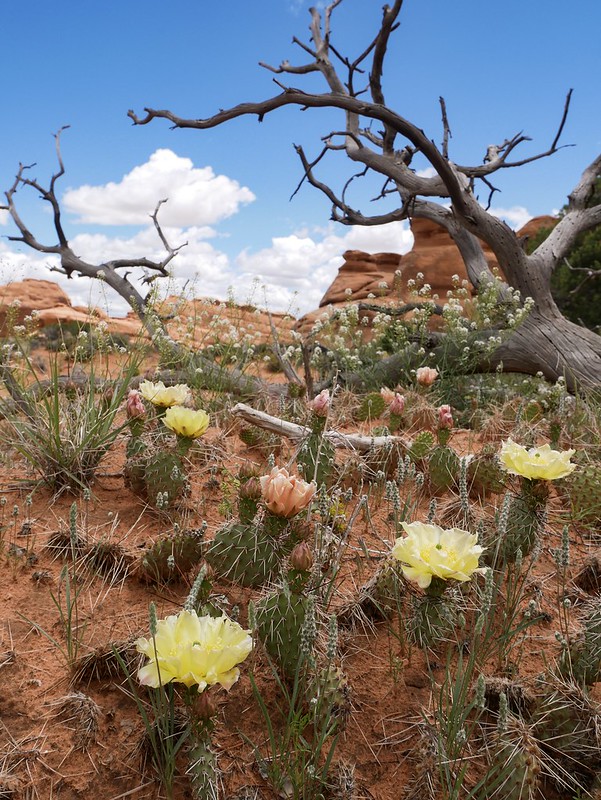 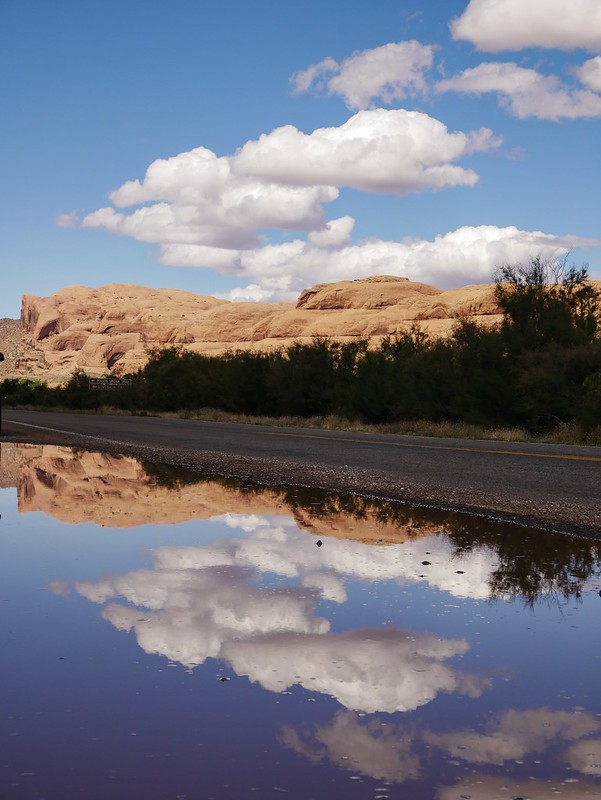 Another thing we wanted to do in Moab was take Roland the row boat down the Colorado river. We enquired about safe areas for us to take our feeble inflatable boat and were recommended to put in at Take Out Beach and finish at the Lions Park area before the bridge. It was a 17km stretch of river and we had a perfect blue sky day for the adventure. Roland was hot to touch when we pumped her up in the sun and the plastic felt really weak like a semi-melted sheet of gelatine. We decided to not pump her up too much out of fear that she’d pop. 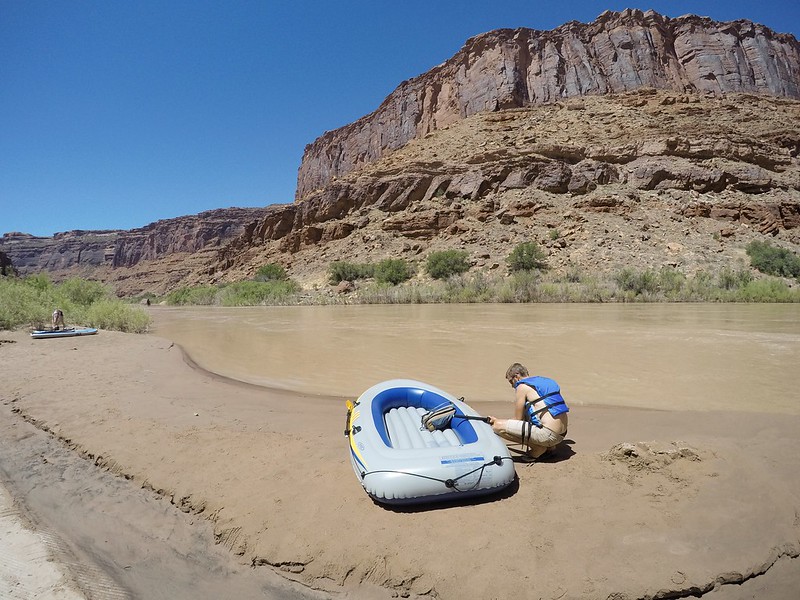 With our life jackets on and whistle close by we set off in the big murky river. It flows all the way from the Colorado Rockies down through Mexico where it empties into the Gulf of California. We’d spotted a couple of rapids as we drove alongside the river so we had an idea of things to expect but they looked very mild…so I don’t know if the rapids were actually much bigger in person than we’d anticipated, if our boat just wasn’t built for the job of if we needed to pump it up more but my god riding those rapids was the cheapest adrenaline rush we’ve ever had. 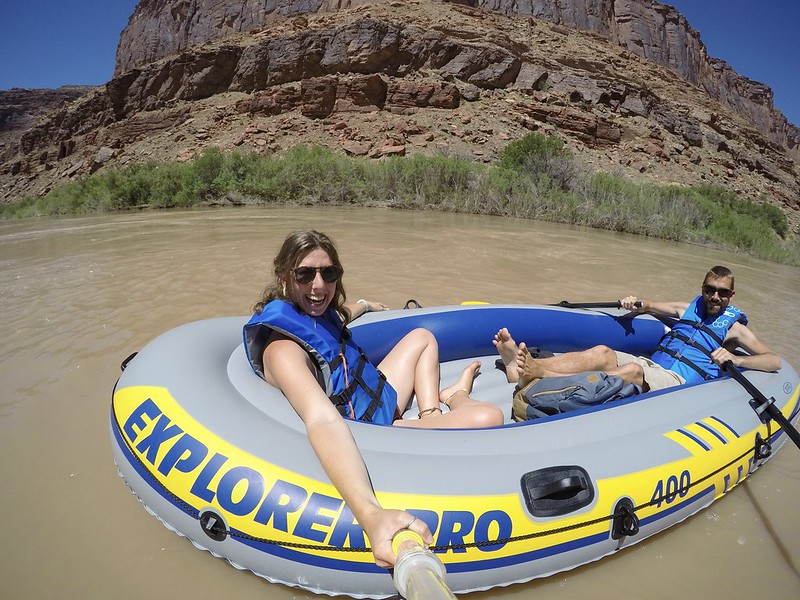 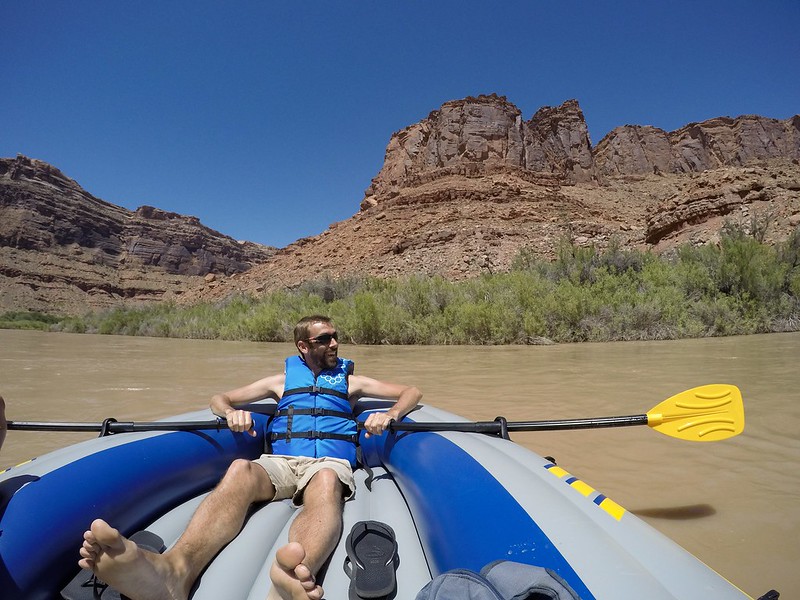 Craig was really sunken down in the boat due to the lack of air, in fact he looked tiny from my angle and I found it hilarious watching him (even funnier when I later showed the photos to a friend and she said it looked like I was taking my son out on a paddling trip!!). The first rapids weren’t too bad and we managed to get through but the second lot were much more aggressive. Craig tried to veer us into a calmer path but the current won and pushed us into the roughest area with a slight drop down before the waves hit us. If the Colorado river wasn’t brown to begin with it sure would of been after we went through those rapids, it was WILD! 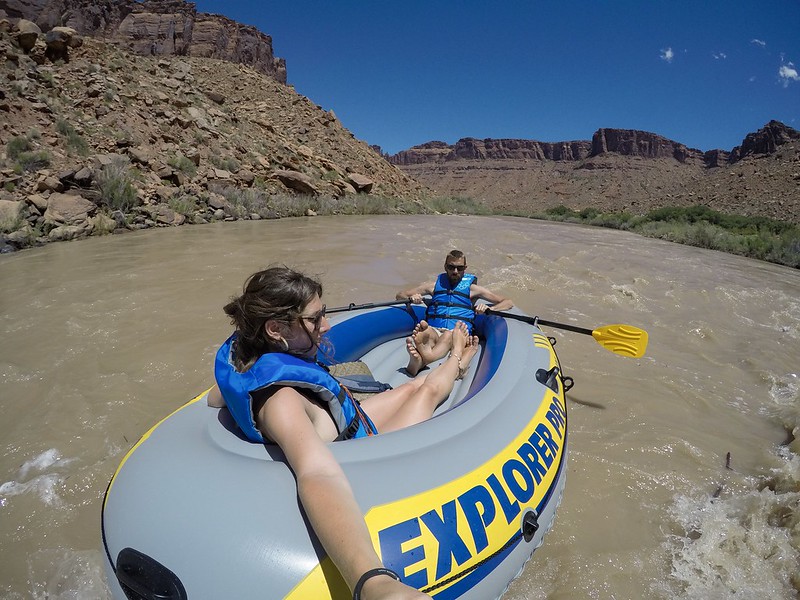 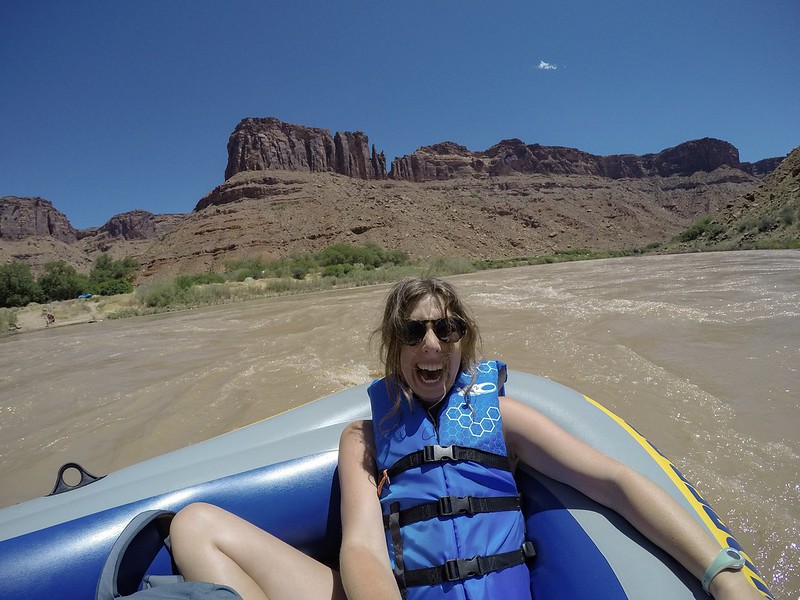 Roland wasn’t exactly taking the rapids well. I was sat at the front of the boat with my back to the rapids so suddenly I’d rise up high over a wave and I’d look at Craig whose section of the boat was right down at the base of the wave and it basically looked like he was being swallowed up by the river. Then the roles would swap, my half would go deep down with waves crashing around me and water splashing onto us. It went from funny to scary very quickly thanks to the lack of buoyancy we had and Roland was so bendy it looked like she was doing a constant Mexican wave to any lucky folks that witnessed our whitewater rafting disaster. Sometimes Craig would just vanish out of sight as the middle of the boat raised right up and we both went backwards. After the sheer panic was over we roared with laughter like absolute maniacs and then we spotted a base jumper deploy his parachute after jumping from a steep red wall and we couldn’t help but wonder who was living life more on the edge, us or him? 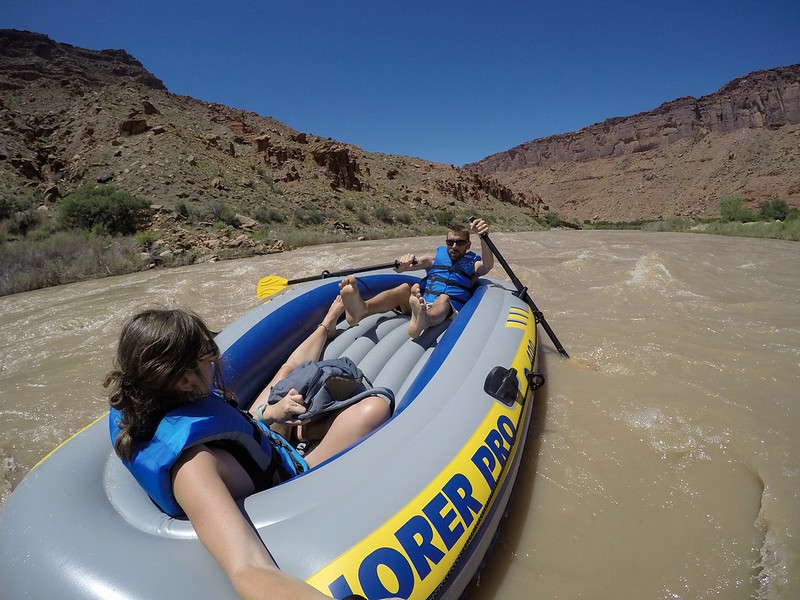 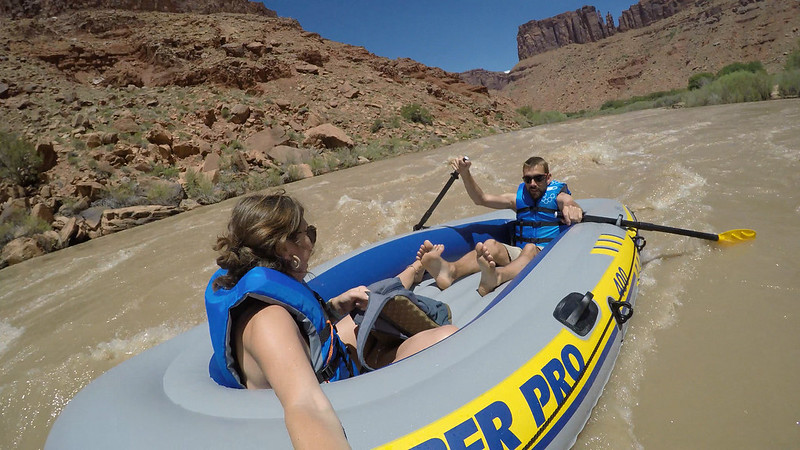 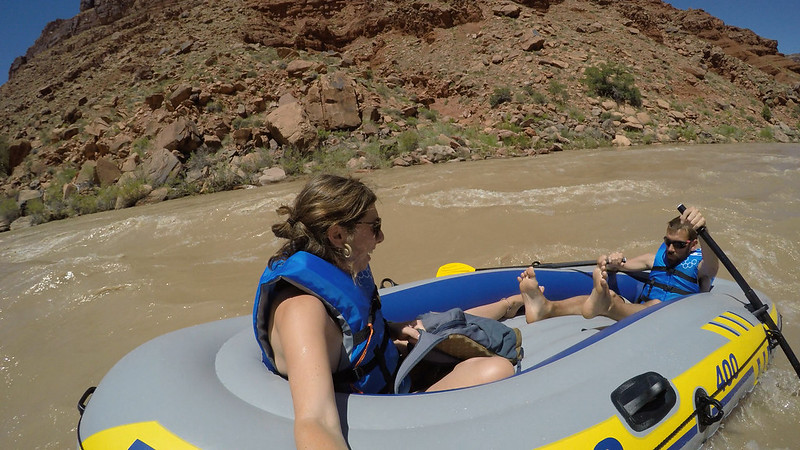 The rest of the trip was extremely relaxing as we floated down the river at the same pace as the sticks and debris on the surface. The scenery was incredible and we had plenty of time to just lay back and enjoy the view. We were surprised to see paddle-boarders with dogs onboard doing the same route as us. I think it would be the funnest thing to paddle with a dog but definitely not on the rapids and one golden retriever we saw had his tail between his legs most of the time. 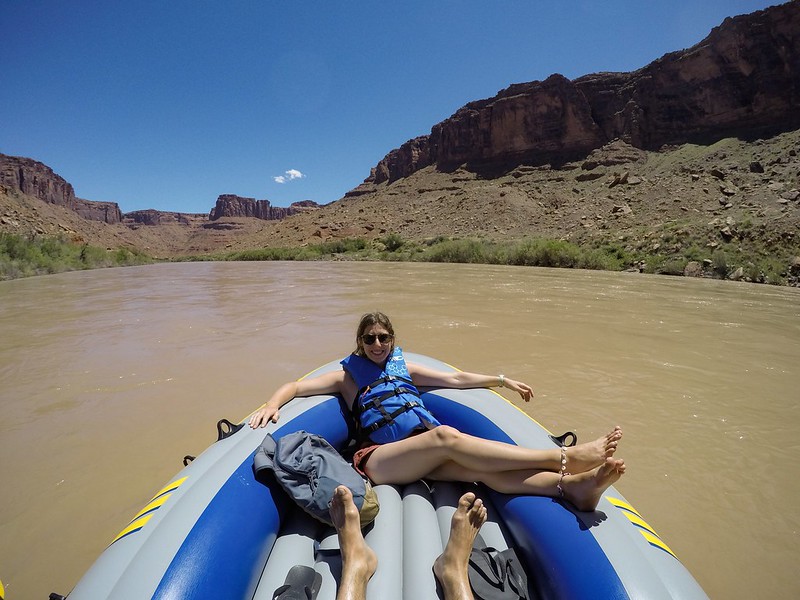 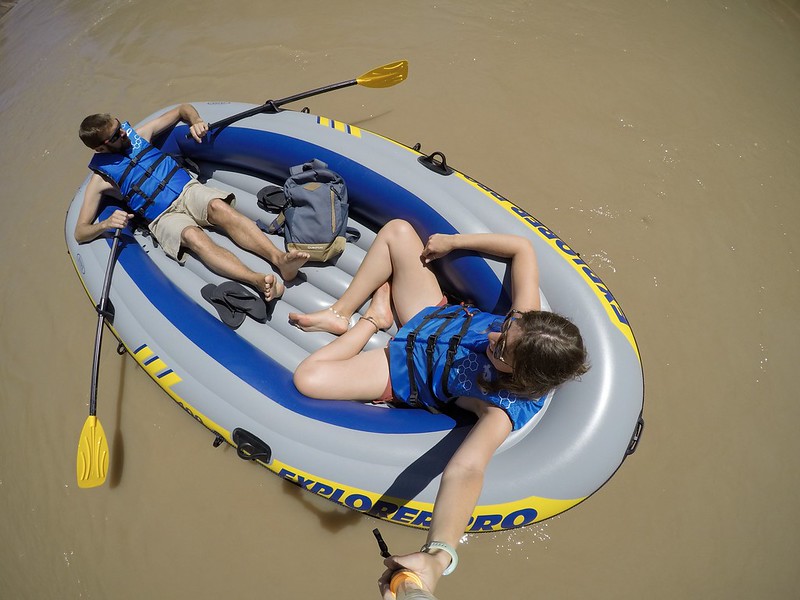 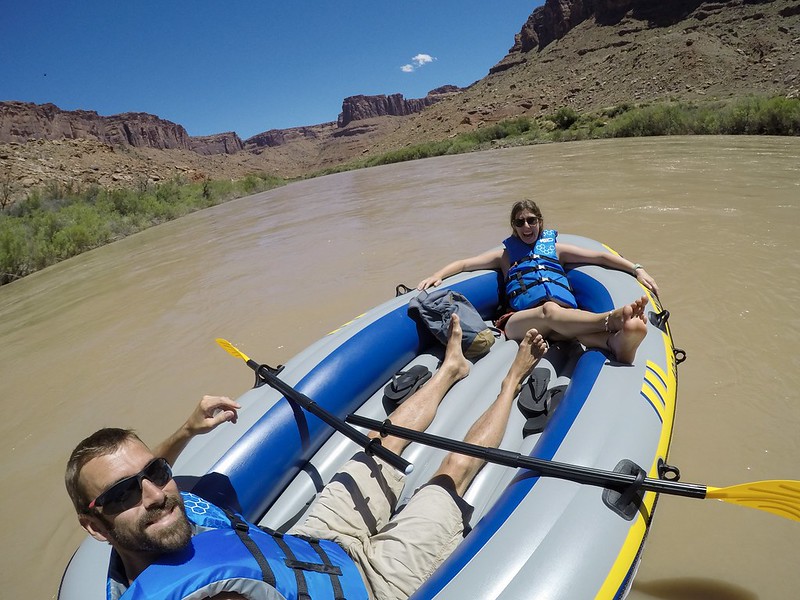 When we arrived at the end of our route we let the air out of Roland and then Craig hitchhiked back to Ruby the van and drove down to collect me. We had such a blast and considering it was memorial weekend it was a great way to escape all the crowds.