We had the opportunity to visit Myanmar back in 2009 but we decided not to as we ignorantly thought the only reason to visit was to see pagodas. We’d seen our fair share of temples already in South East Asia so Myanmar was missed off our itinerary, but now, almost 10 years later we are flying to Myanmar to see it for ourselves.

We flew into Mandalay and were welcomed into the country with warm smiles from the locals, all of which were wearing a traditional sarong style skirt called a Longji. It was interesting seeing how they all wore them, men tied theirs at the front and some used the excess fabric to store things in, I spotted a man undoing his and inside the fabric was a phone charger. Women all wear the longji straight down, very smart with a t-shirt or matching blouse. The locals also had yellow patches painted on their faces, some just had neat squares on their cheeks while others wore it like a full face-mask. It’s called Thanaka cream and it’s made from grinding bark with water to make a cosmetic paste which is said to prevent sunburn and acne and keep youthful skin. 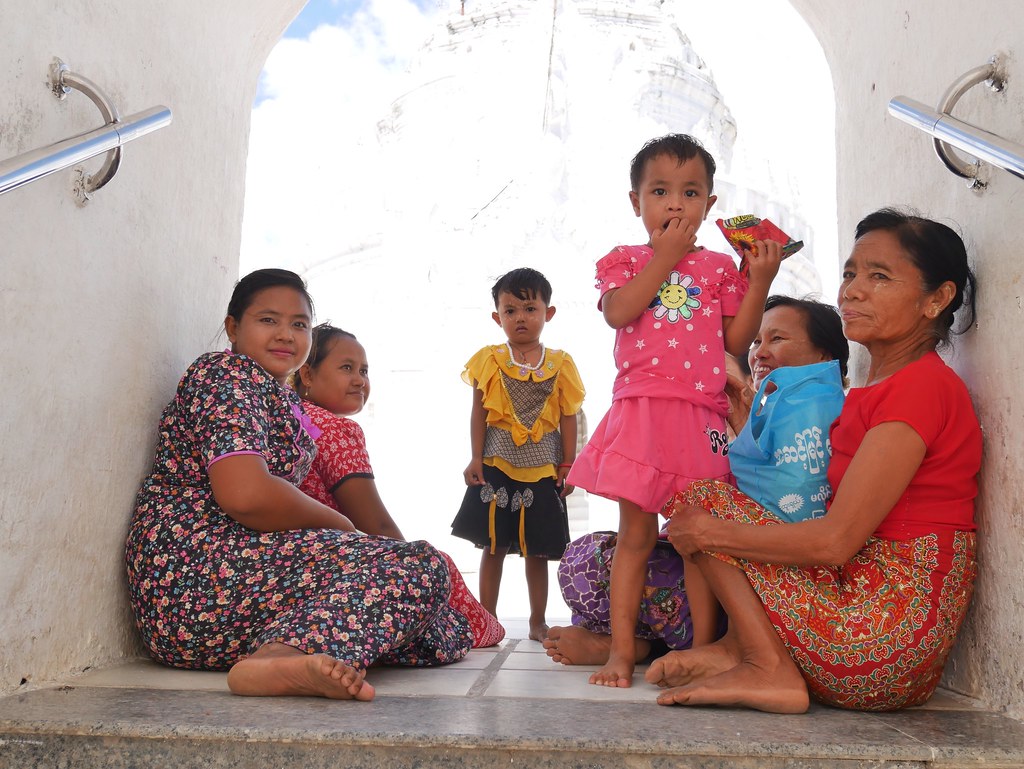 Another thing we spotted everywhere was betel nut, or mainly the red spit marks on the floor. They clearly loved betel here, which when chewed in a leaf with a dab of calcium hydroxide gives the consumer a high, a red mouth and eventually very very black teeth. We’ve seen it in many counties so it wasn’t anything new to us, but pretty funny watching men leaning their heads back so they could speak with a mouth fall of saliva, then putting their head back down and doing an awkward closed lip smile out of fear of the red juice squirting out. A convenient bus ferried us to our hotel in downtown Mandalay. When we arrived the hotel staff quickly dashed out and laid some bricks on a puddle so we could step off the bus. Bellboys grabbed our backpacks from us and we were sat down with some orange juice and watermelon. The staff all spoke English and our room was spotlessly clean with an amazing mattress, something that’s very important when travelling. Our hotel even offered free bicycles and a free buffet breakfast, at only $14 for a double it was a bargain and a great start to Myanmar. 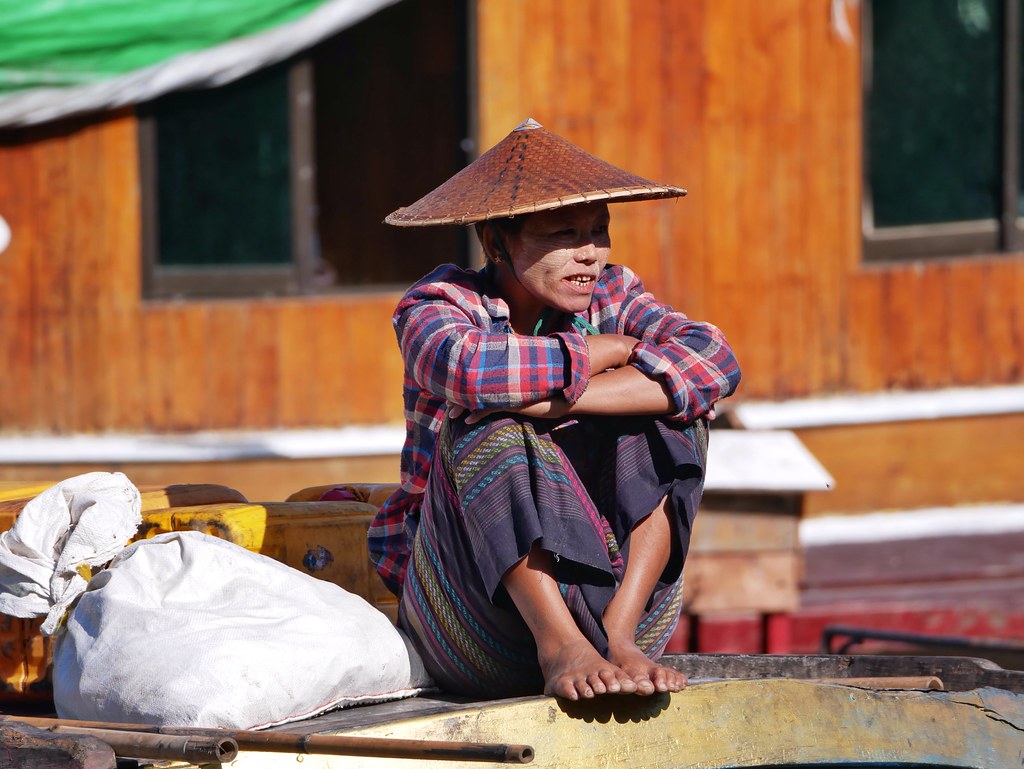 The next morning we took advantage of the bikes and cycled down to the boat departing area along the Irrawaddy River. We were heading an hour upstream on the murky brown river to reach the temples at Mingun. The river was busy with boats and locals running up and down while carrying heavy sacks of produce. Ladies hand washed clothes in the brown water next to floating rubbish while others washed themselves with their longjis pulled up to form a privacy dress. One man was selling petrol and I felt so sorry for him as he had to syphon it from a metal barrel every time and kept coughing afterwards, his life expectancy can’t be long doing a tough job like that. There wasn’t a jetty and our boat had four others in font of it so they put planks of wood between each boat for us to precariously cross over. A local man was on each boat ready to grab our hand and pull us to safety until the next crossing. The big boat only had about 15 people onboard, all tourists, and we chugged along passing small stilted villages along the shore. One person had tied up dozens of rows of bamboo to make a big, floating surface and on it he had his little home which was a basic tarpaulin tent shaped in a triangle like the scouts do. He was just floating in the river but then we spotted he had a boat engine connected to the rear so it was basically a moveable home which was cool.

The boat arrived at Mingun and an old man was waiting on the shores waving at everyone. He was sat in the driving seat of his carriage pulled by two hump-backed cows and the handwoven carriage even had taxi written on it. We headed along a souvenir lined road to the top end where Hsinbyume Pagoda was. It was a stunning pagoda, bright white and circular with a wave style wall going around in layers. We’d seen photos of monks running along the waves but sadly they weren’t there when we visited so we got some snaps of me hopping across the walls instead. The sun was bouncing off the white walls and hitting us from every angle, it was scorching! We followed steps through white archways up to the top where there was a big Buddha statue and views over vast forest with the odd pagoda poking above the foliage. 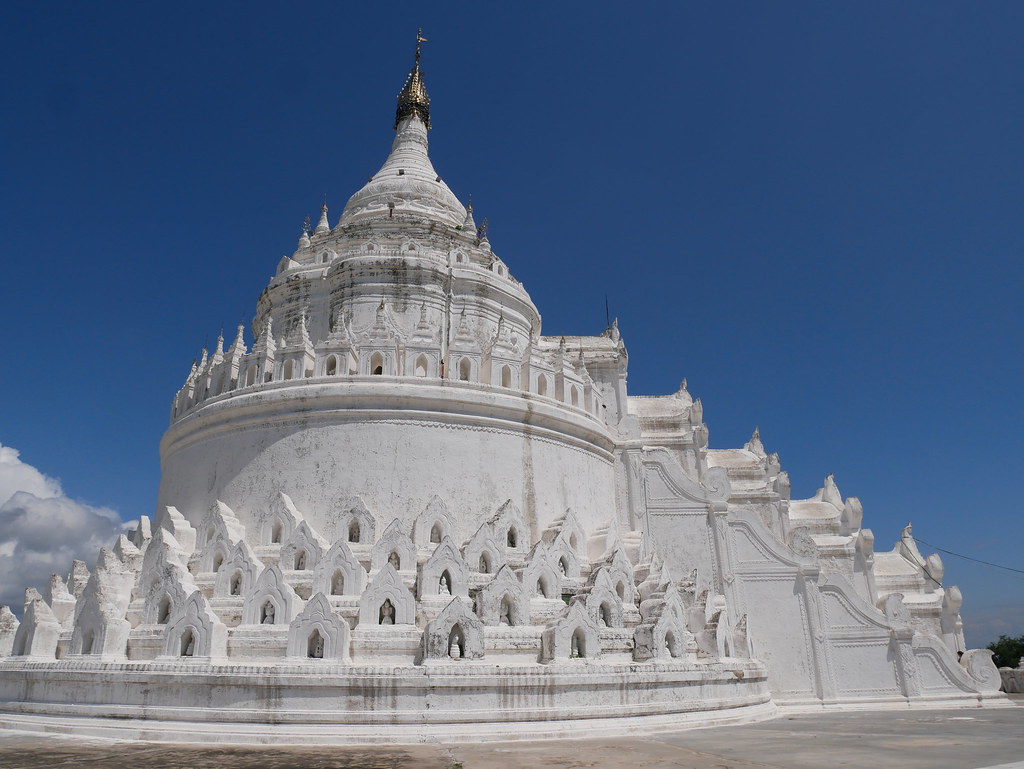 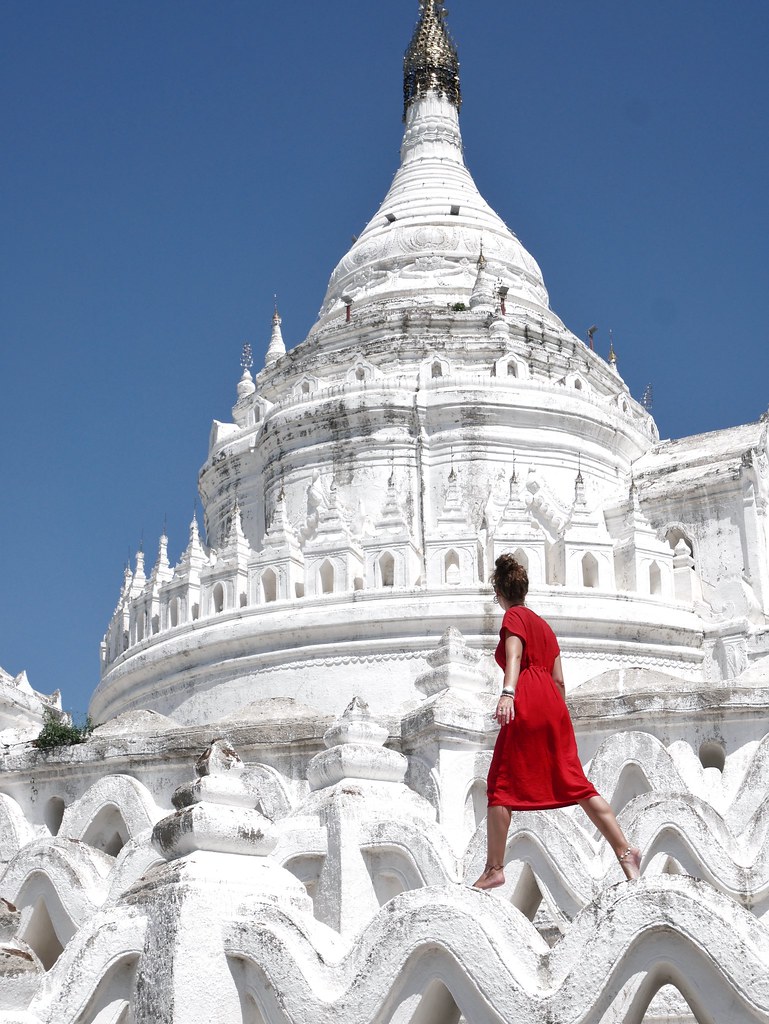 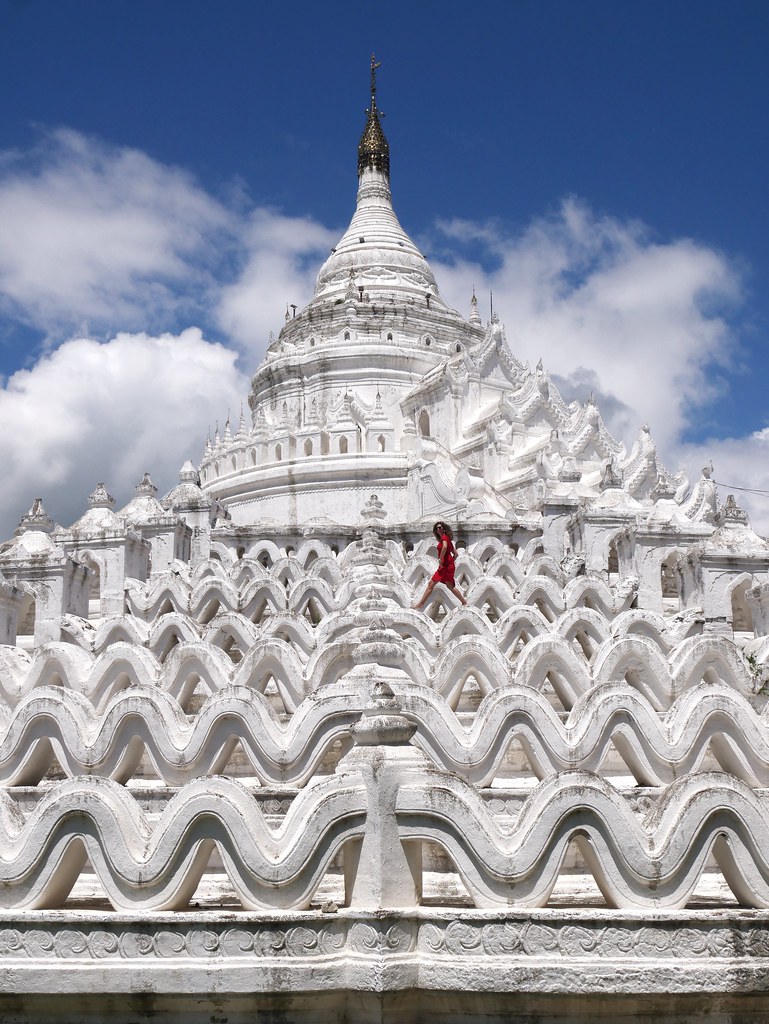 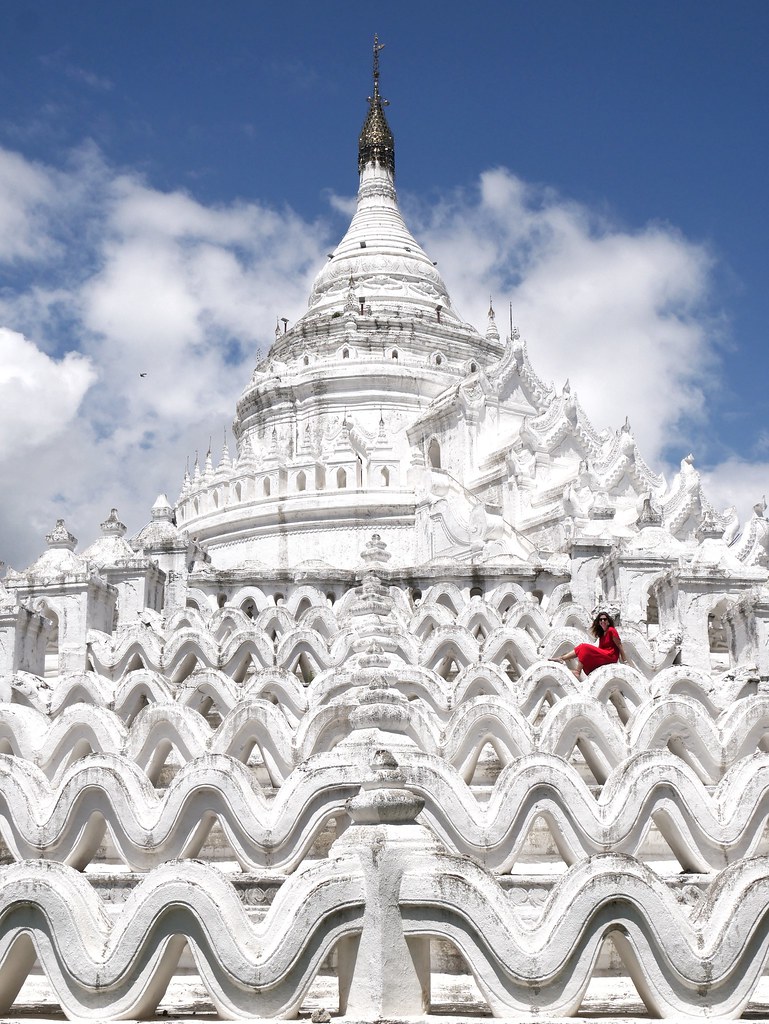 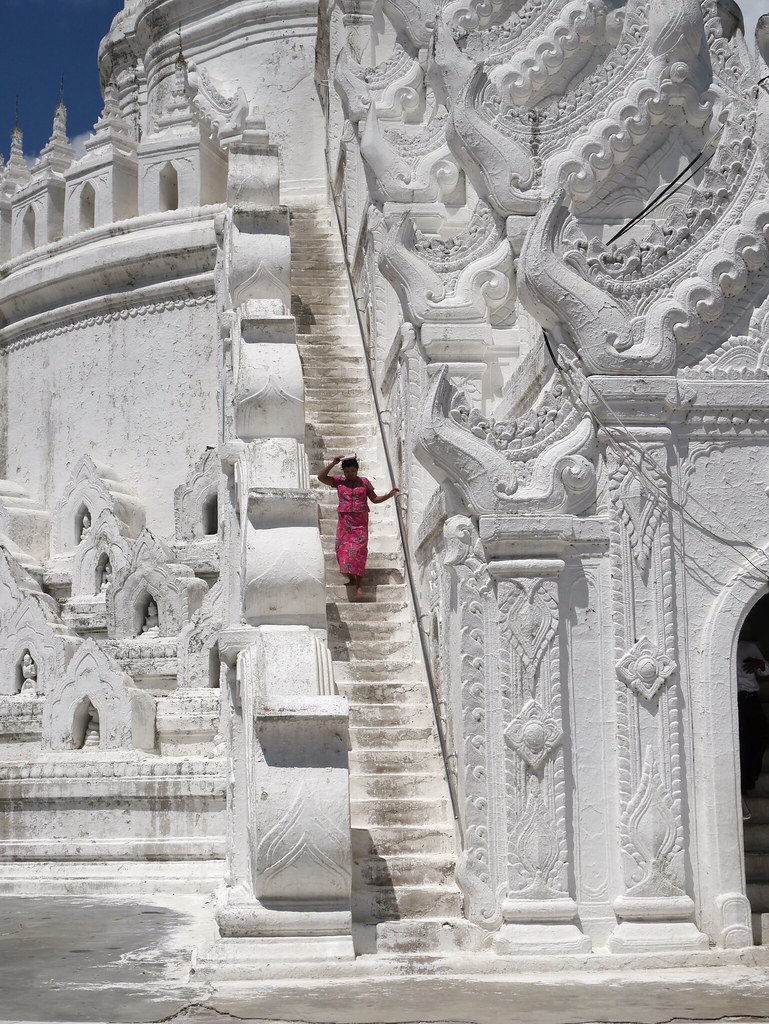 Nearby was Mingun Pahtodawgyi which was a bizarre Buddhist temple. It was a huge rectangular mass of bricks, densely packed in that it almost looked like a natural rock shooting out the ground. Apparently building was never completed as an astrologer predicted that once it was finished the king would die. We followed the steps up to see what was inside and it barely went in more that 4m, to a Buddha and nowhere else. We walked around the circumference of the building where a door was on each side but they didn’t lead anywhere, then it dawned on us that there wasn’t anything inside, it was built from the inside out with bricks. Big cracks had formed on the building from earthquakes and some corners had totally collapsed, revealing the solid mass of bricks. 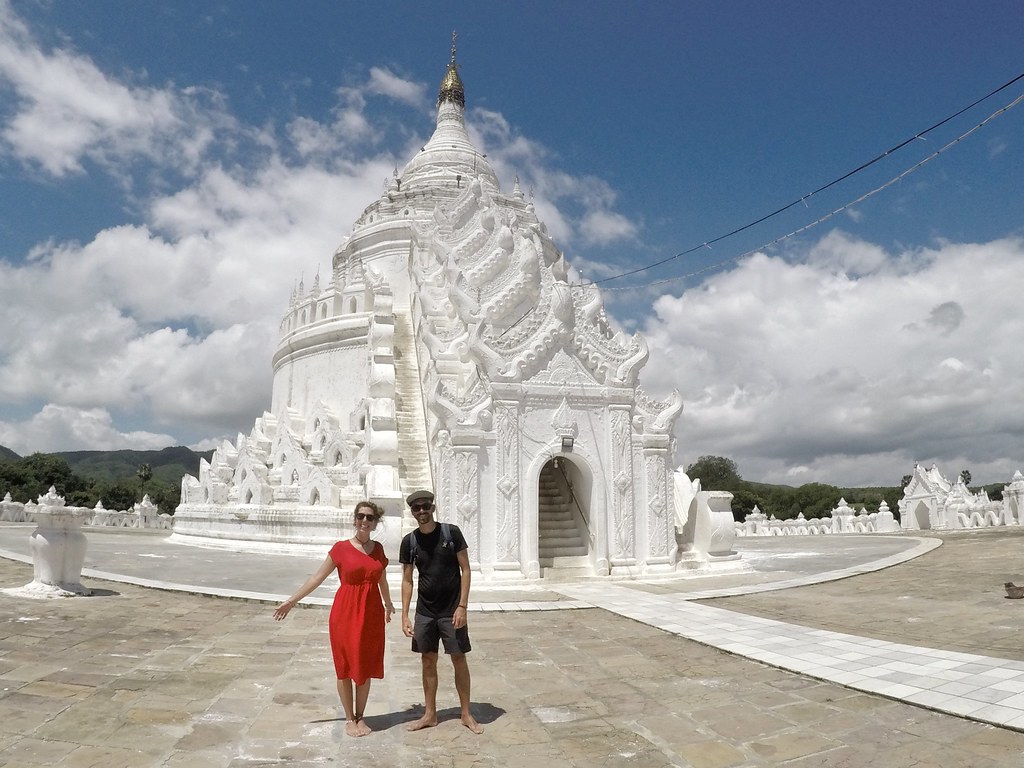 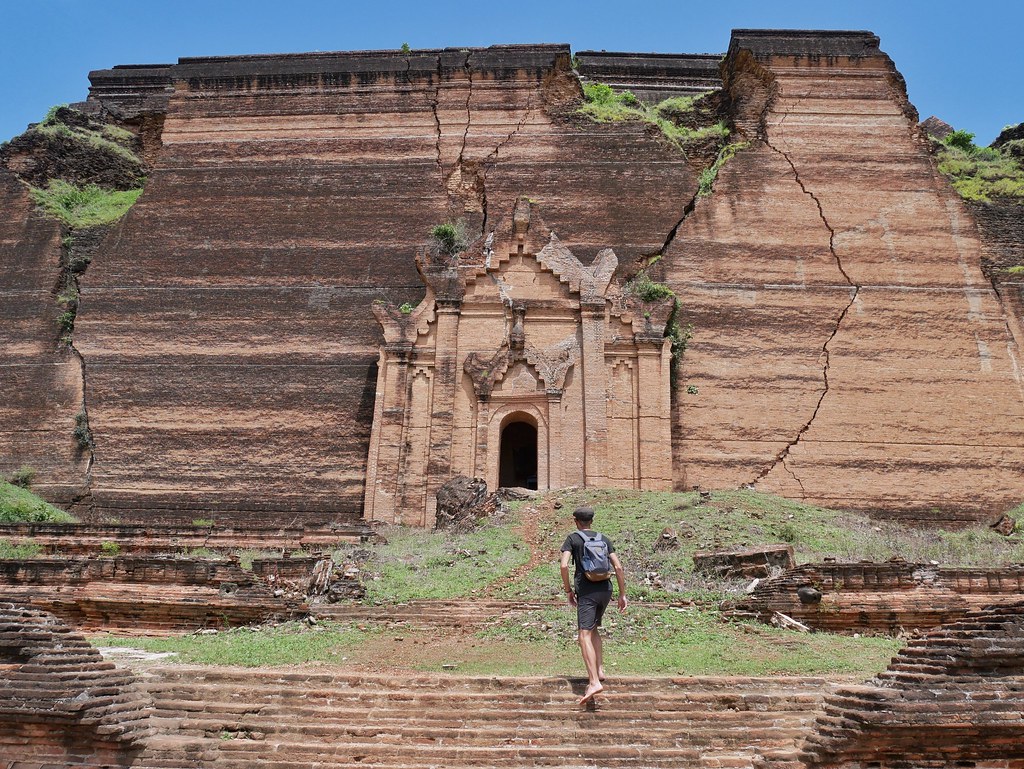 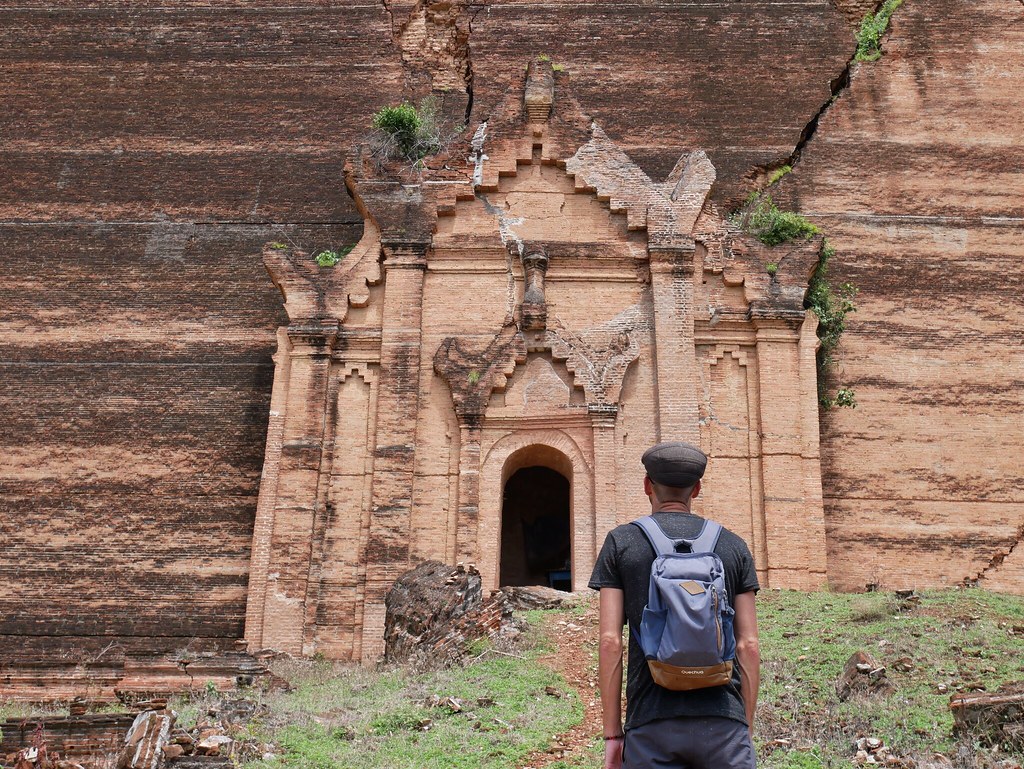 The boat headed back at 12pm so we still had lots of the day available and decided to continue with the bikes south to U-Bein Bridge. The road went alongside the river and was lined with very basic huts and families going about their daily life. It was kind of like a shanty town yet we felt very safe and everyone was really excited to see us, saying hello with beaming smiles. When I stopped to adjust my bike seat a man rushed over to see if we needed help, we didn’t but he helped anyway, holding the bike while Craig wiggled the chair up. We went to a local eatery for lunch, both ordering fried rice and a coke each, plus a bottle of water and a coffee and the bill came to $3. We gave the young boy a nice tip and he wouldn’t except it, I guess that eatery doesn’t see many foreigners.

It was a long bike ride down to U-Bein and we ended up passing through a really busy village full of street stalls, including rows of tattoo stalls right by the road. We passed some jolly ladies who stopped me and pointed to the baby they were holding and then pointed back to me as if they wanted me to hold the baby so I just awkwardly shook the babies podgy hand and that seemed to please everyone. We stopped by some pagodas and palaces on the way. You need to remove shoes and socks to even walk in the grounds of a Buddhist temple but we were surprised about how unkept the floor was. It was no different to walking on a pavement or road, I almost stepped in dog poo but I didn’t have as much luck when I slid in wee and then stepped into the path of red ants. It’s very interesting seeing the differences in religion, in Uzbekistan we visited a Russian Orthodox Church where devotees pressed their heads onto glass boxes with figurines inside, and as soon as they stepped away a volunteer would blitz the surface with glass cleaner and polish away any marks, in mosques it’s just shoes off as you enter the mosque itself, keeping the floor clean to pray on. 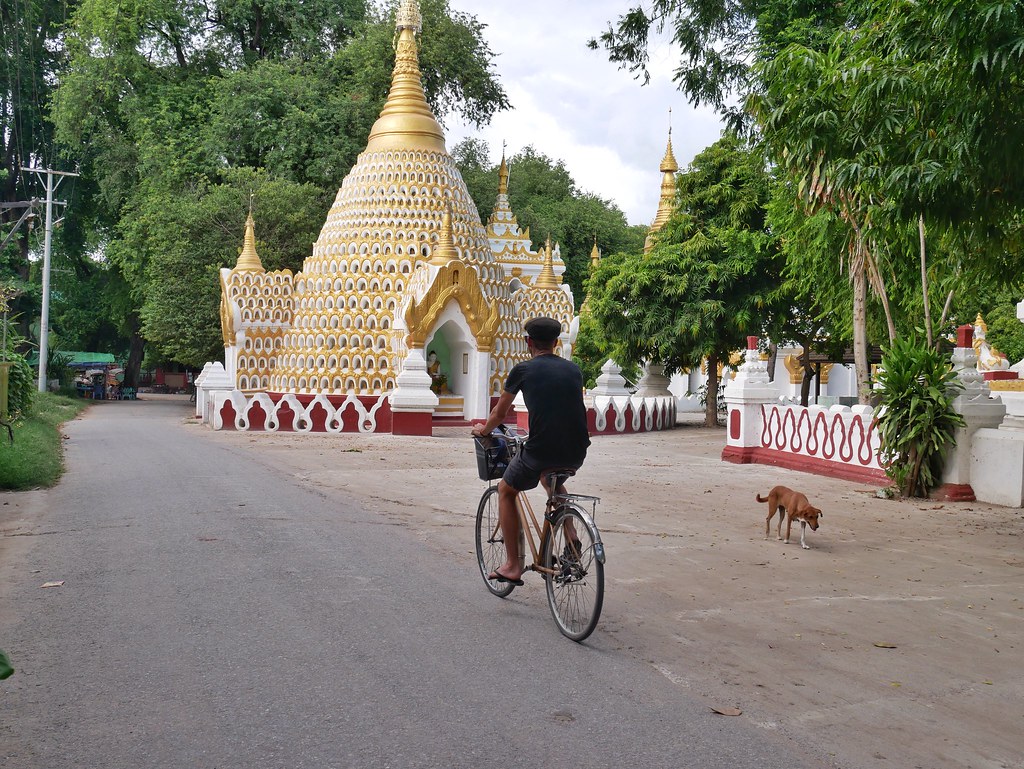 We cycled around the edge of the lake where a group of men had freshly dyed threads and were laying them out in the sun to dry. Soon after the road came to an abrupt end and the lake spilt across the entire road. There was no way around it, it had completely over-flowed so we had to backtrack and take a long route around. We finally made it to U-Bein and we had a couple of hours spare before sunset so we sat in a rustic shack built over the waters edge and enjoyed a coconut while watching the world go by. 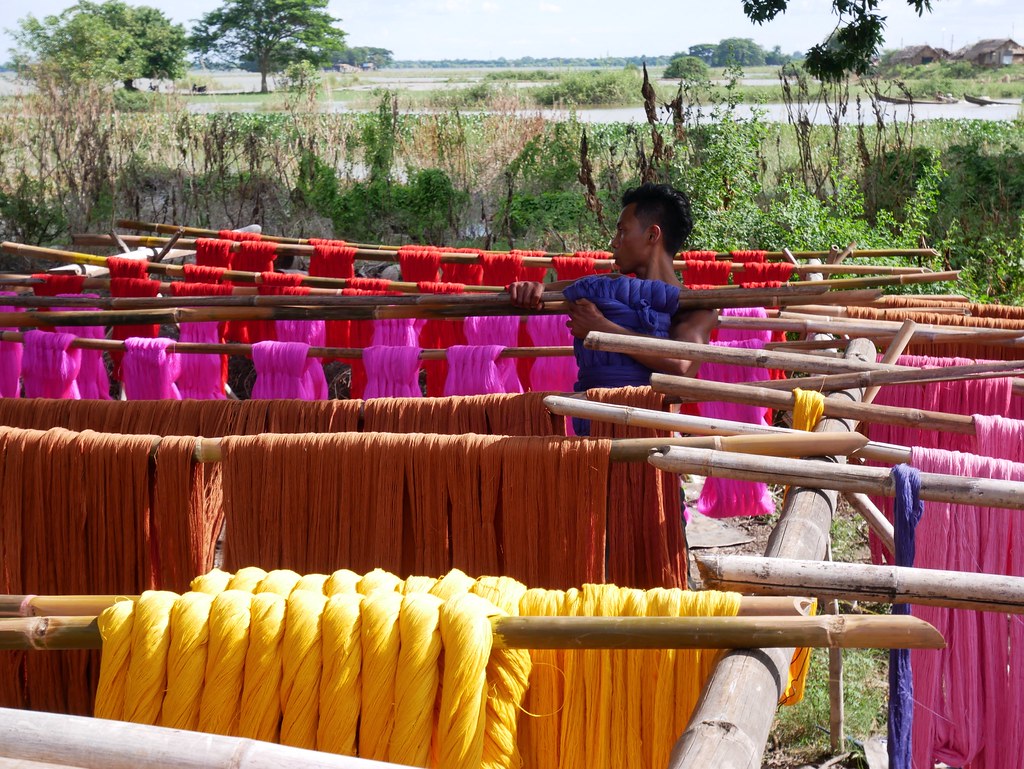 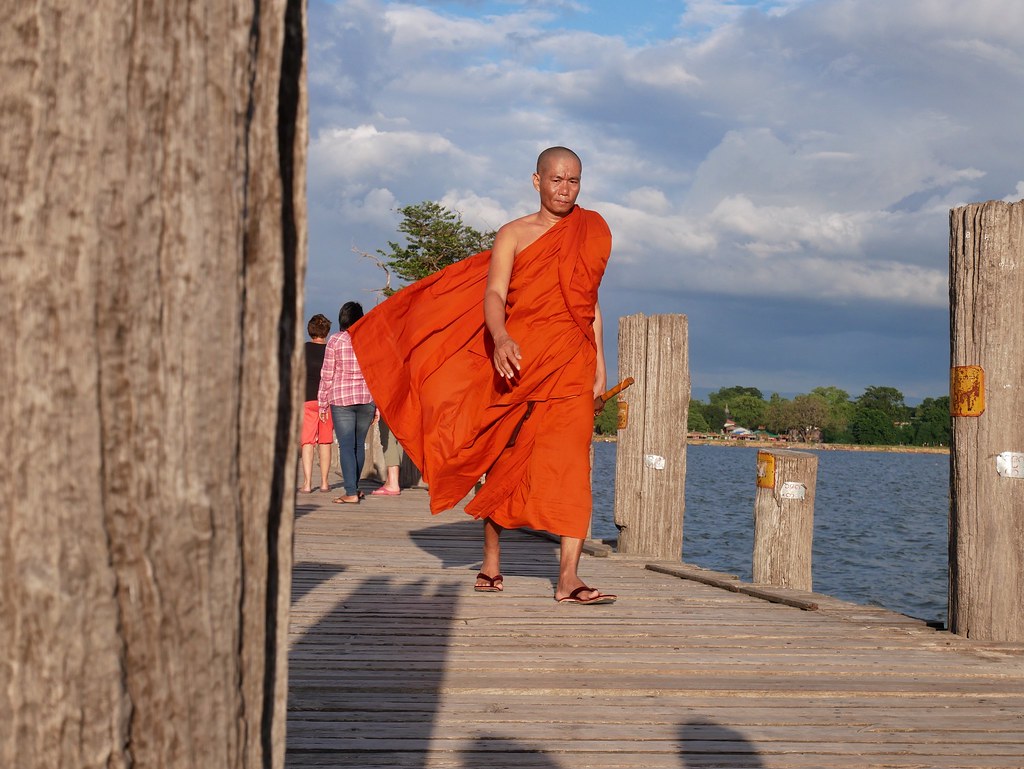 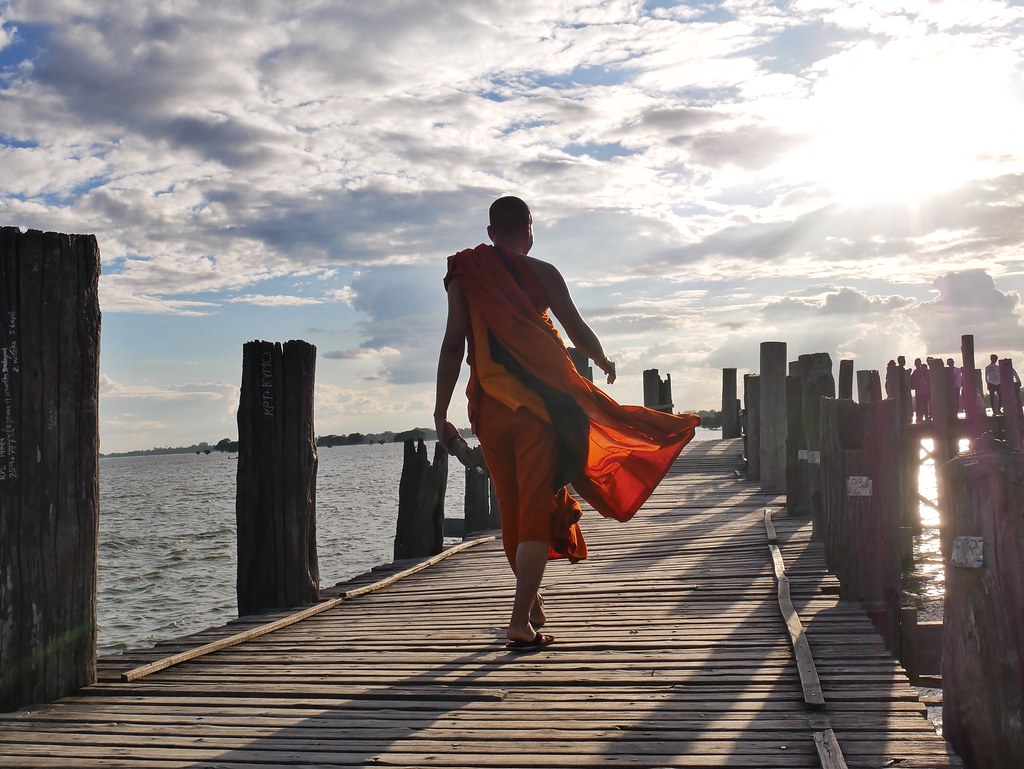 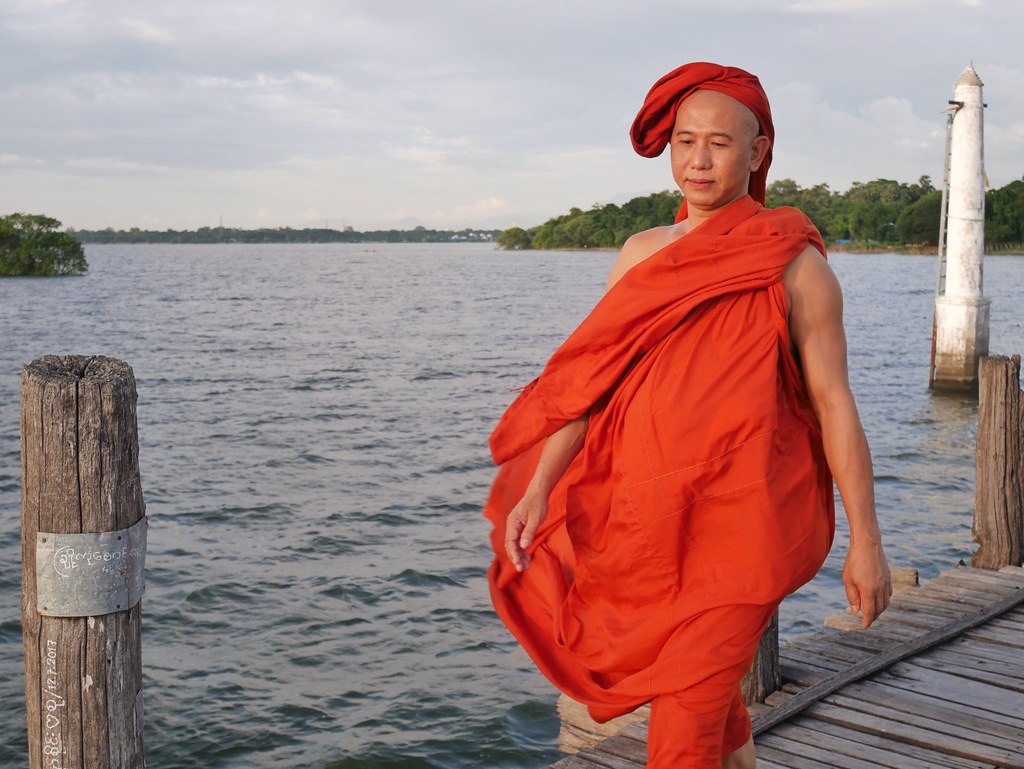 U-Bein bridge is the longest teakwood bridge in the world at 1.2km and was built back in 1850. It was quite high above the brown lake yet there were no guardrails or fence so one wrong move could see you in the lake. Monks wandered along with their orange and maroon robes swaying in the gentle breeze. It was funny to see them casually snapping photos on their phones just like everyone else. The sun lowered and let off a yellow glow to the sky while a few clouds changed colour above us. It wasn’t quite the sunset we’d hoped for but behind us a big storm was brewing and those clouds became more colourful. 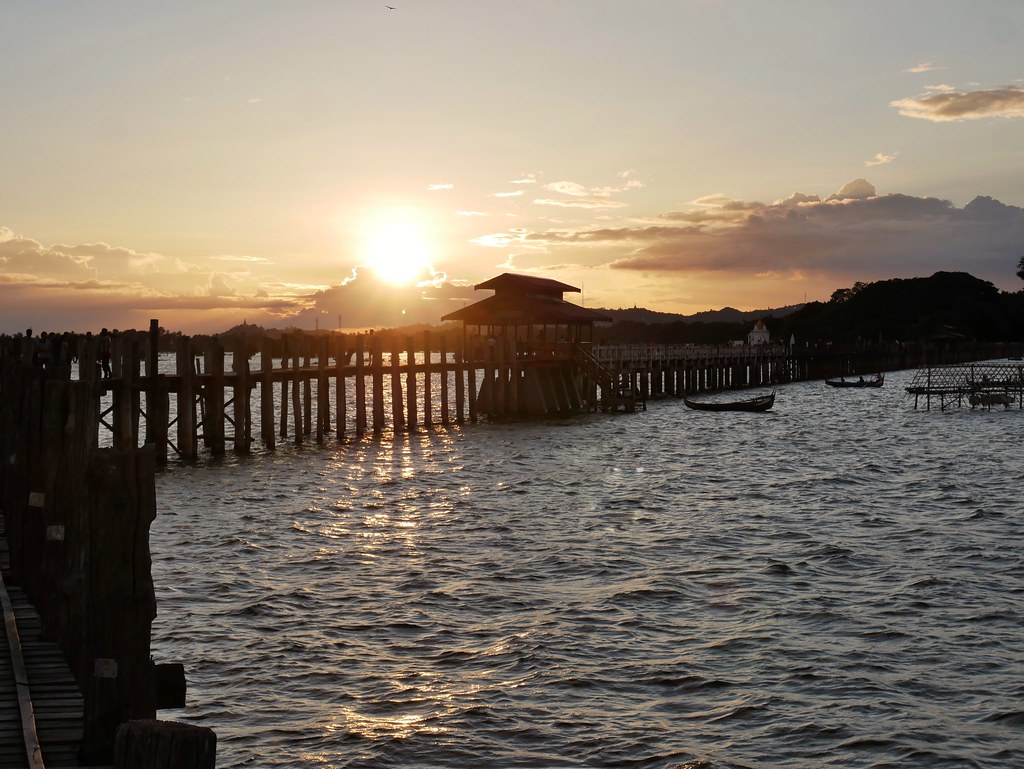 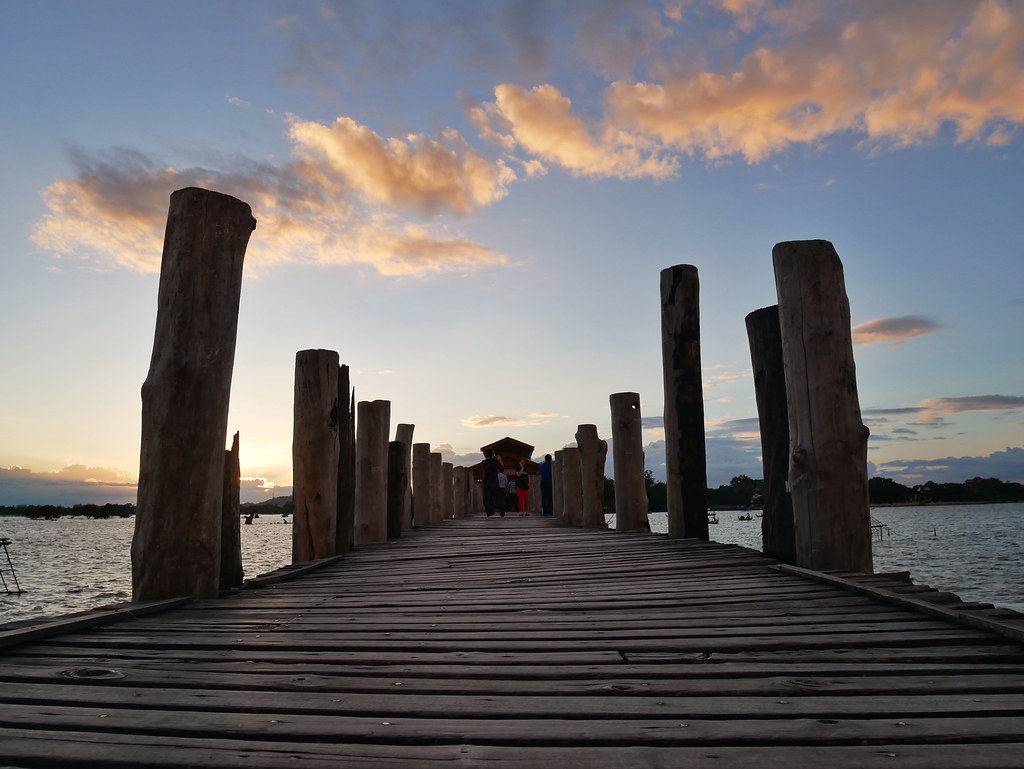 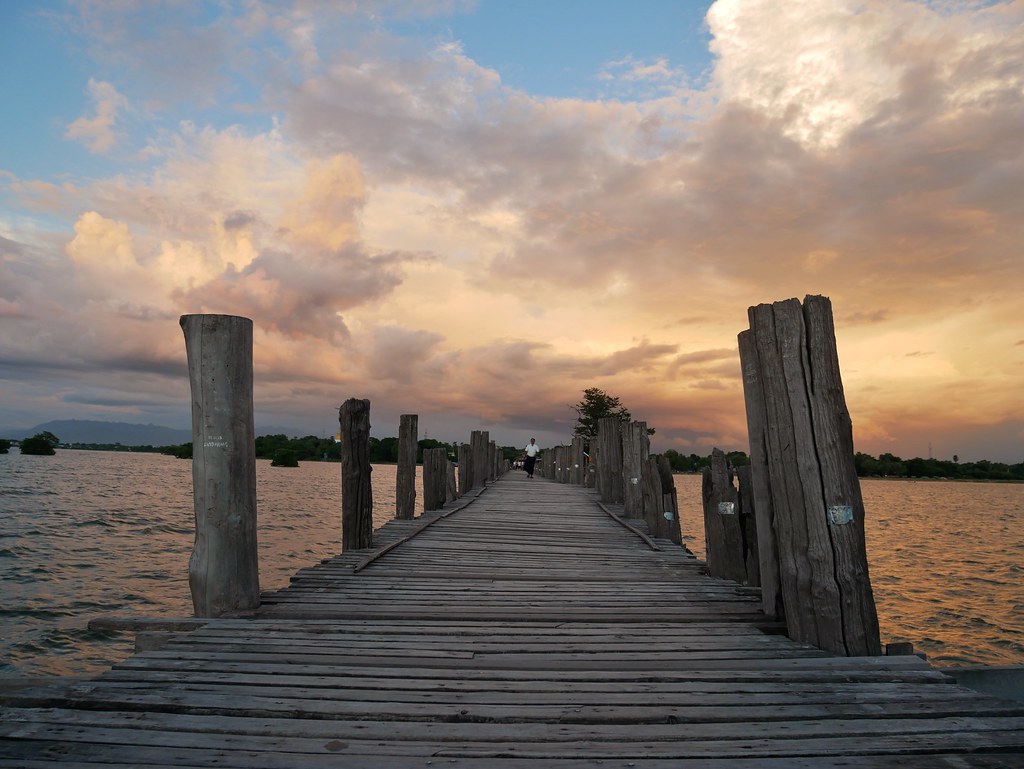 By the time we left it was almost dark so we put our head torches on. I cycled at the front with my white light guiding the way while Craig was at the rear with his red light shining behind as if we were an extra-long tandem bike. I think I got the bum deal as my bright light attracted so many insects which continuously flew into my face. It was a bit of a manic bike ride through the city at night but we made it back safety and sat down to a rather disappointing dinner. It turns out Myanmar food isn’t the best and doesn’t follow suit with its neighbours cuisines. Every dish is drowning in oil and flavoured in a bland way. On the plus side we’d had a very successful first day in Myanmar and needed an early night for the next days adventures to some off the beaten track waterfalls. 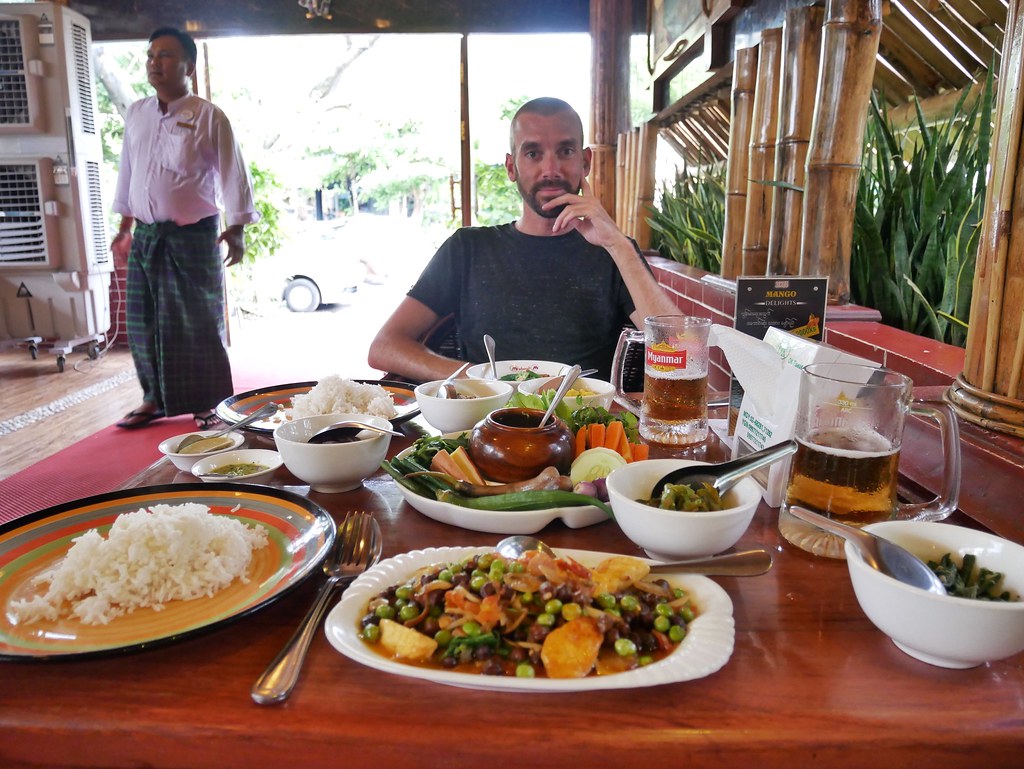