Life is very calm in the Stan’s, we don’t get hassled, taxis don’t honk for our attention, it’s all just very peaceful and easy – except for when we arrive at a shared taxi stand and suddenly dozens of men crowd around us. It’s bizarre! They fight to get our bags out of the taxi and lead us to their car and most of the men are just there to spectate. Anyway, we found a shared taxi to Panjikent, it was a fancy Lexus yet we were paying the local price for the ride, so really what was everyone making such a big deal about? At high speeds it only took 3.5 hours to reach the bustling town near the Uzbekistan border. We just had a night there in a hotel with a furry toilet seat cover that I refused to sit. We were heading to Haft Kul in the Fann Mountains the next day so we pre-arranged to stay at Homestay Najmuddin. The owner, Jumaboy was taking some tourists back to Panjikent so agreed to take us back with him for a small fee. A lovely Israeli couple joined us, we got on really well and ended up chatting the whole way.

Jumaboy was a really sweet chap with a heartwarming smile and little cackle. His teeth looked more like little rock’s as decay had heavily set in but still, the smile was adorable. There’s many different areas you can visit in the Fann Mountains but we were heading to Haft Kul which is a chain of 7 lakes stretching 20km through a valley. 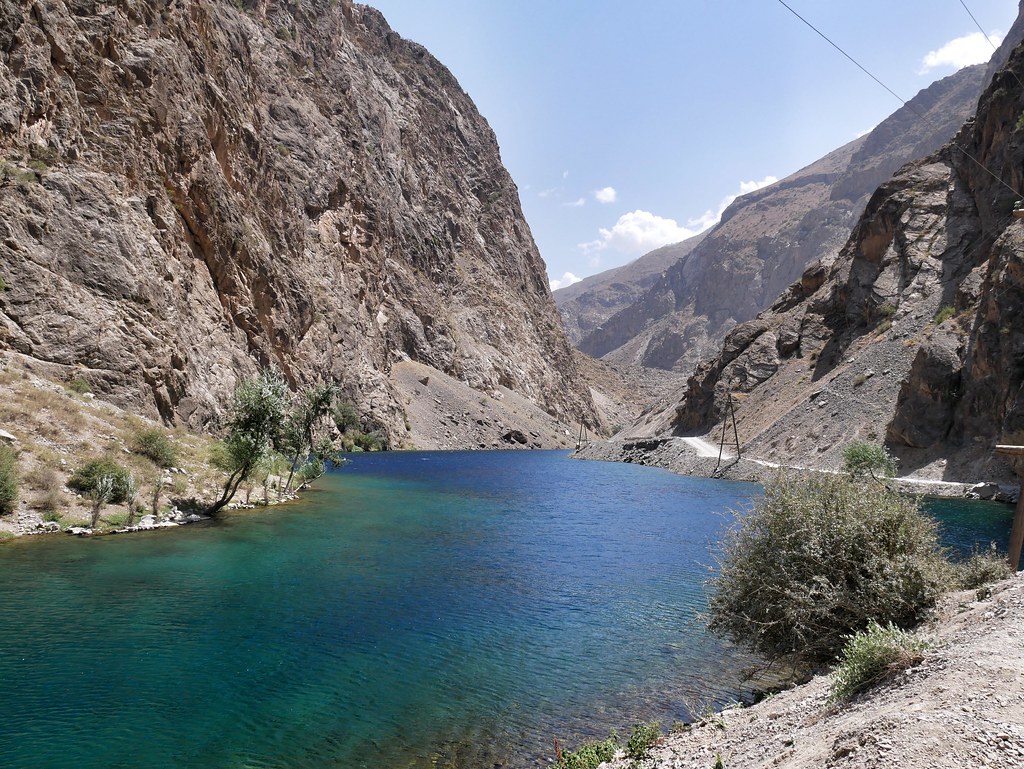 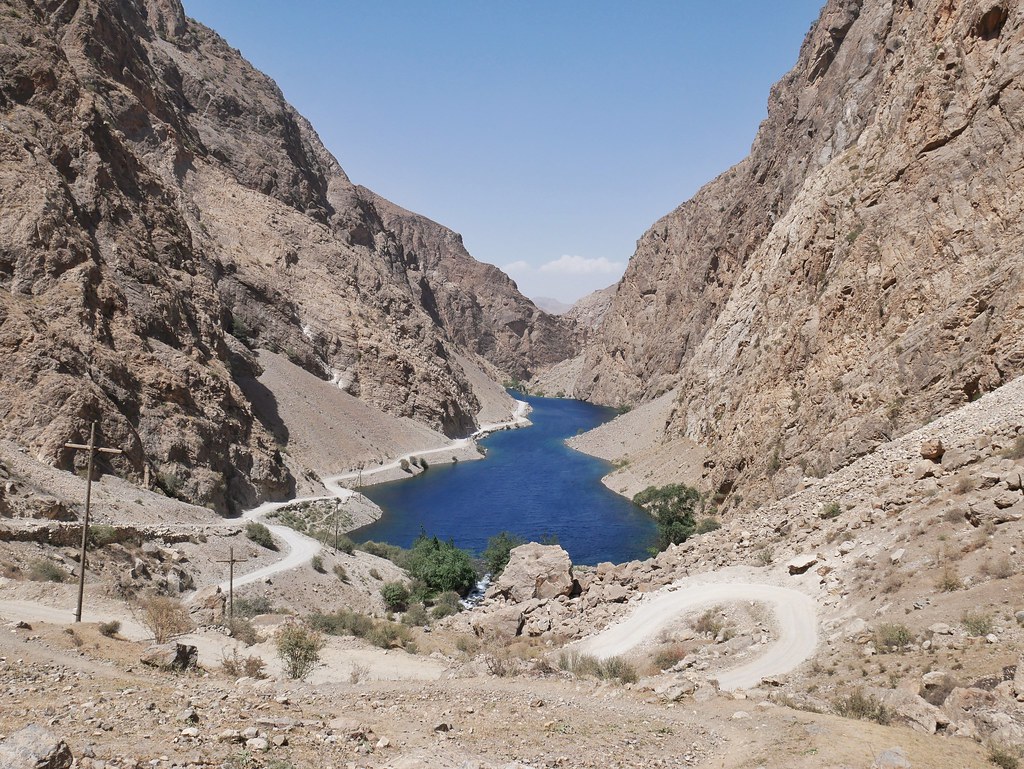 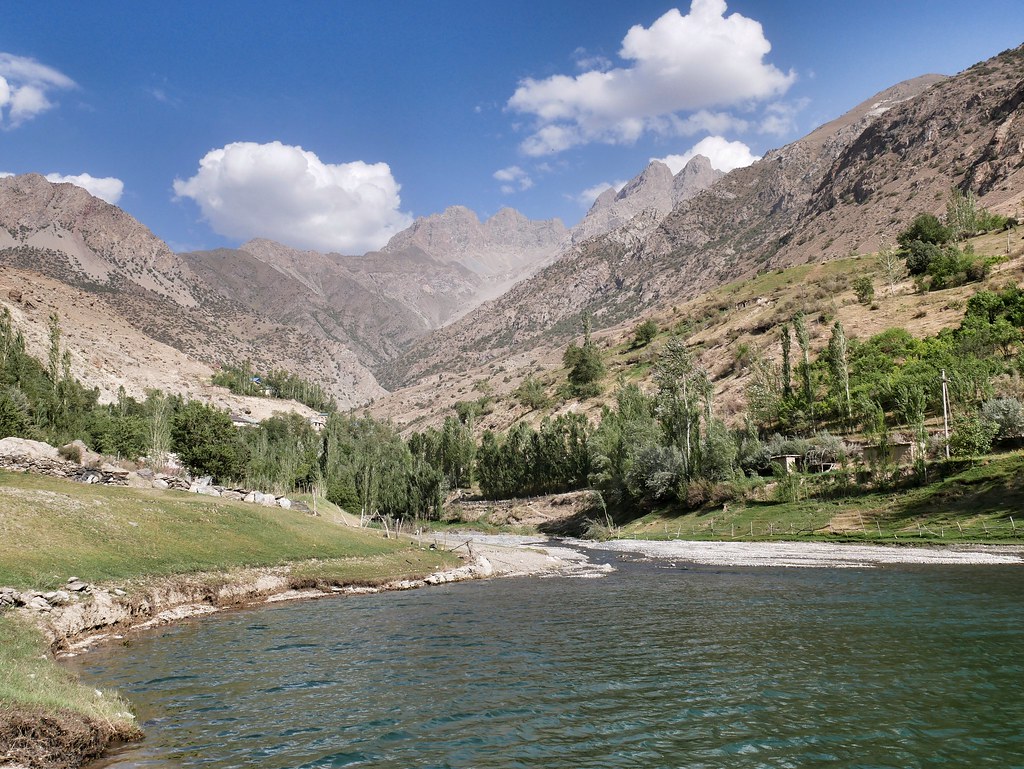 Jumaboy’s homestay was at Nofin by lake number four and the two hour drive along a dirt track was beautiful. Lake one was probably my favourite as it went deep very quickly so the edges faded from a turquoise into dark blue but even in the depths we could look down and see stones maybe 10 or so meters below. The homestay had a typical outside sort of seating bed with fabric draped around it – the perfect place to escape the heat. As we walked past it though I saw a small child was asleep, but her eyes were half open. She had to be asleep as she had swarms of flies around her head. So many flies that her mouth was almost black with them flying in and out of it. I felt really creeped out like I was hallucinating and I quickly scurried into our room. The walls were draped with embroidery pieces and colourful rugs. When we went back outside the baby was being scooped up by her mum and led away. We sat down on the bed area, making sure to not sit where the horror scene had just taken place, and we were served lunch by his daughter and wife. They had really colourful clothes on, baggy pants with a long, loose dress and traditional bandana. 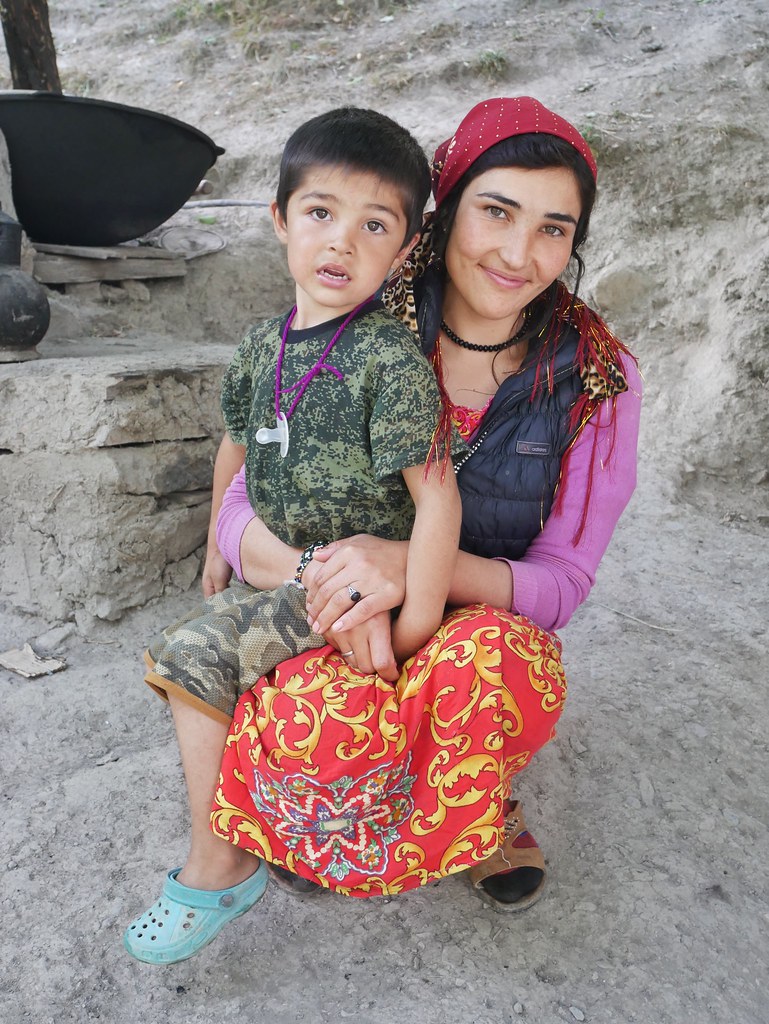 Lunch was a bit pathetic with a totally liquid soup missing any ingredients inside. As we sat there a group of tourists on a private tour turned up and we watched as the son took tray after tray of food to them, including bowls of watermelon and grapes. Our mouths were watering and eventually we were gifted some watermelon, maybe the hosts saw that as an easier option than having to continuously wipe up our drool. I turned around to see two kids smiling at me, and I recognised the girl…she was the one with flies in her mouth, but now she was absolutely adorable with short hair and little dimples when she smiled, what a difference, maybe my mind was playing tricks on me.

We decided to just relax for the afternoon so we went for a short stroll to the lake where Craig braved a swim. He found a good access point into the frigid water which seemed to be on an old, sunken dirt road. 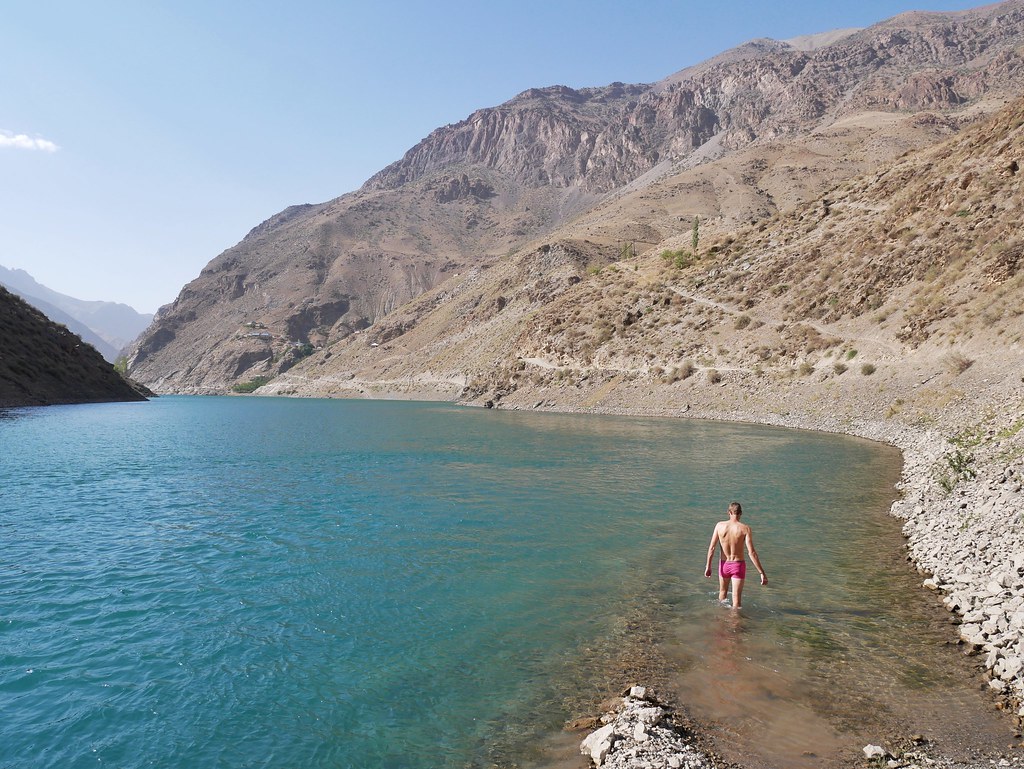 Dinner was a total success after the poor lunch, we had plov, the typical Central Asian rice dish with salad, watermelon AND grapes, plus a bowl filled with nuts, sweets and chocolates! Delightful! After a raw omelette for breakfast, we managed to negotiate with Jumaboy to take the four of us up to Lake 6. We actually asked him twice the night before, bare in mind he doesn’t speak English, but every time we asked how much he pointed to his head to suggest he needed time to think. Luckily, a good night sleep gave him the decision and for $2.50 per person we all set off. The morning was calm and windless so the lakes reflected the surrounding mountains. Jumaboy stopped at the little village of Padrud where he seemed to know everyone. Kids surrounded our car saying sweet hellos and a couple of adorable sisters saw my camera and asked if I could take a picture of them, amazing how in this area of the world the tables have totally turned. 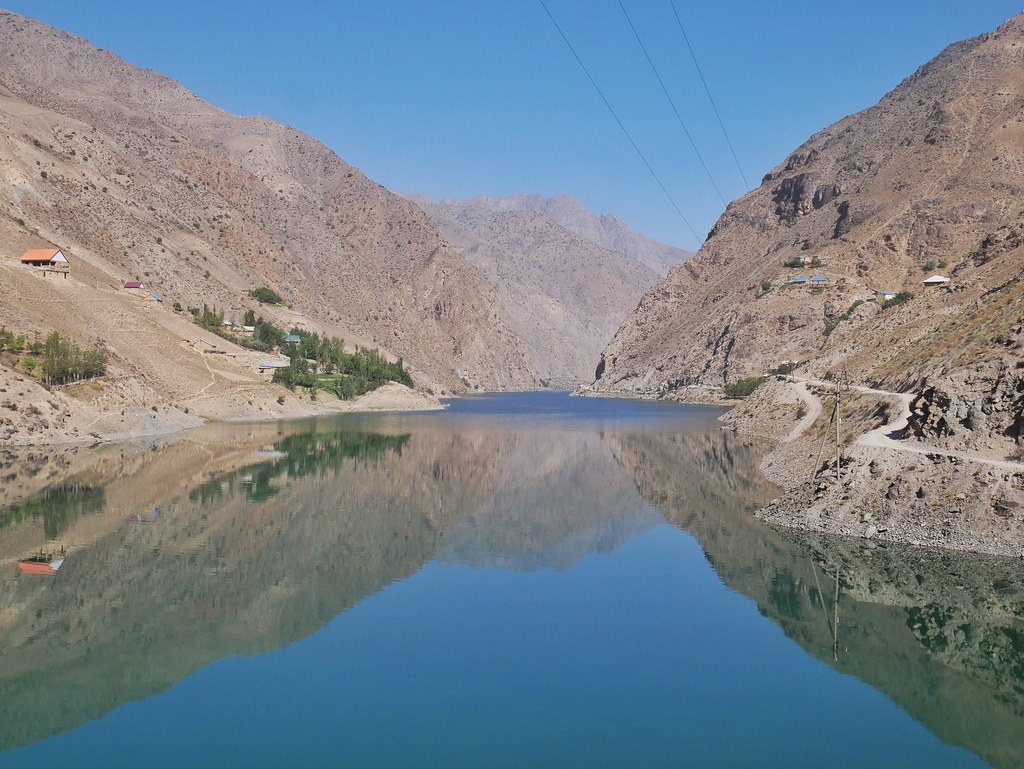 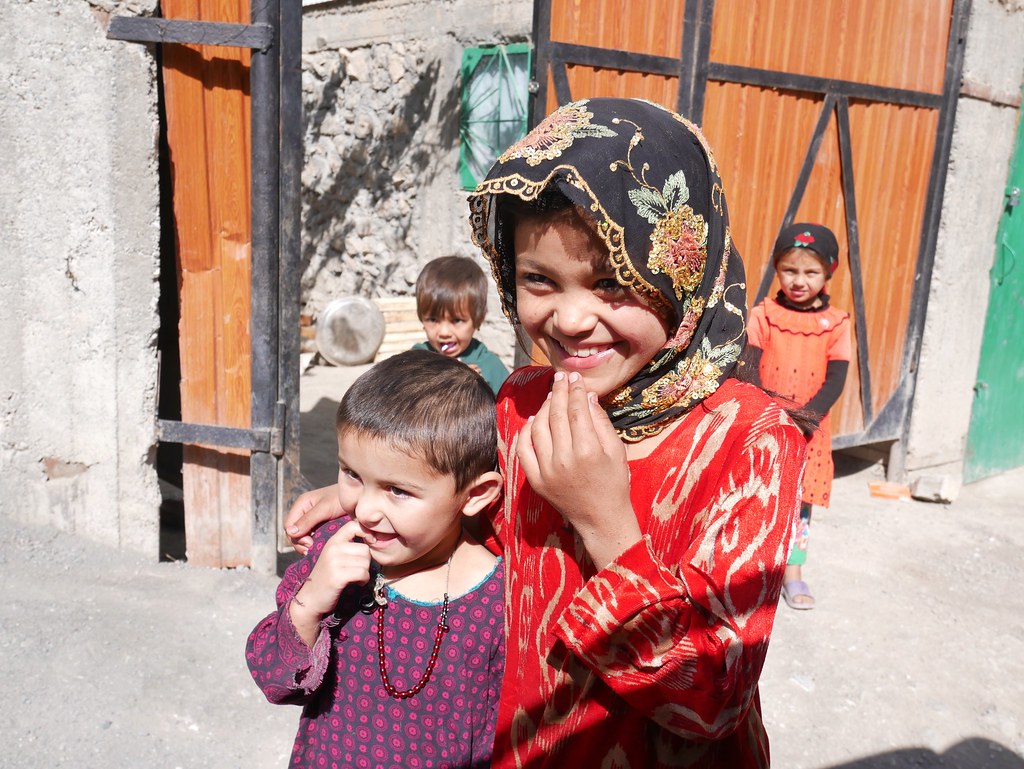 At lake 6 we said goodbye to our Israeli friends, we laughed that we were basically the same couple but from different countries as our mindsets were the same, plus we all loved the card game Yanif and board game Catan. Craig and I headed up a dusty track to lake 7, the final lake. The houses we passed were a very unique design, made of mud bricks but also with wooden beams so they sort of looked Tudor or German style. We were basically walking along a dusty road where every step caused a plume of dust to surround our feet and ankles. The lakes were all connected by a beautiful river and this hike passed a few exciting sections of it gushing down rocks so we took our time and snapped lots of photos. 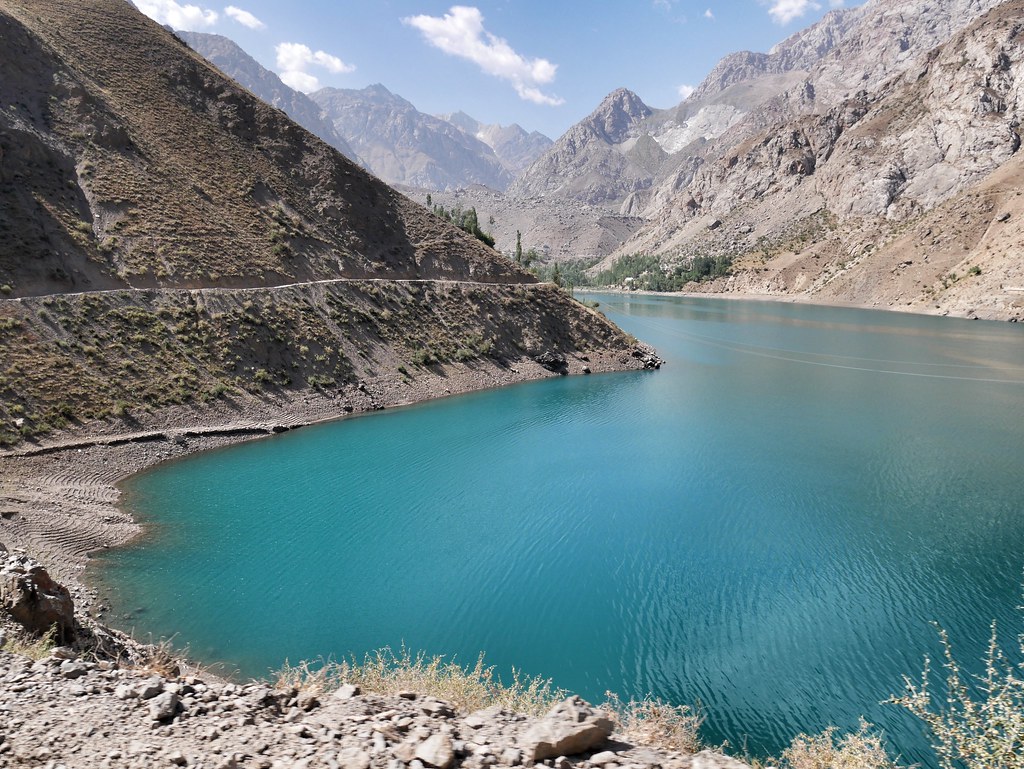 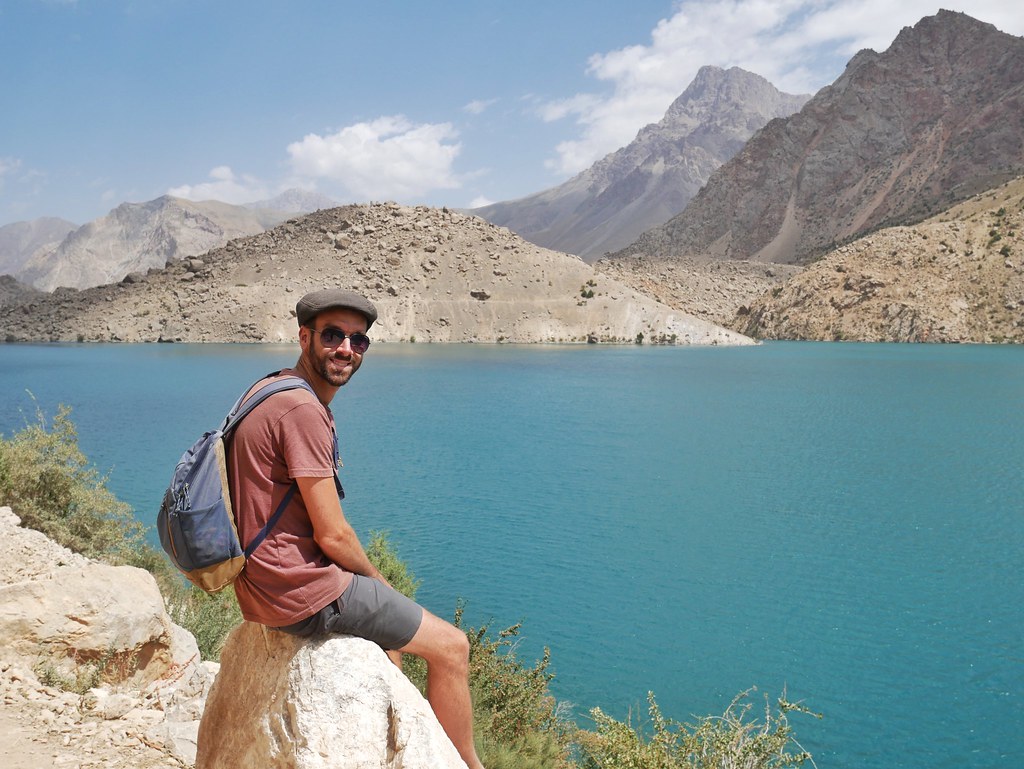 Lake 7 was beautiful, just like the others, but definitely not a “it has to be seen to be believed” moment like our guidebook said. As we turned around to admire the beach we were confronted by a pair of saggy German tits. I had to do a double take as I couldn’t believe what I was seeing, it’s a Muslim country and the Fann Mountains are a particularly conservative area of Tajikistan, yet this 50 year old lady was getting changed into her bikini without a care in the world. There were locals on the beach just a few meters away and I was wearing trousers, a t-shirt AND scarf because I didn’t want to offend anyone. I was furious, how could she be so disrespectful? 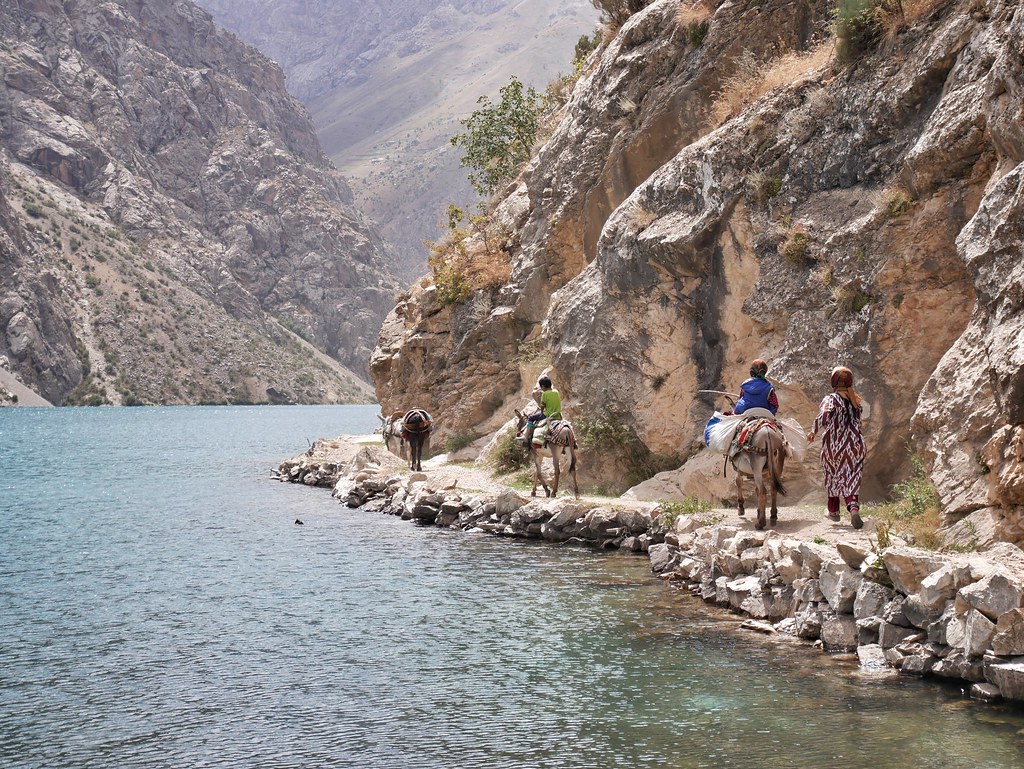 The road stopped and a narrow trail followed the lakeside with a huge wall of rock on the other side. Locals came along this route with their donkeys and we saw one family whose donkeys were running wild with the kids on their backs and the mum was chasing from behind with a stick while the kids laughter filled the valley. They were all wearing such colourful outfits, some ladies donned bright pink or red velvet skirts and they all wore flowery bandanas. The colours looked incredible against the stark mountain backdrop. 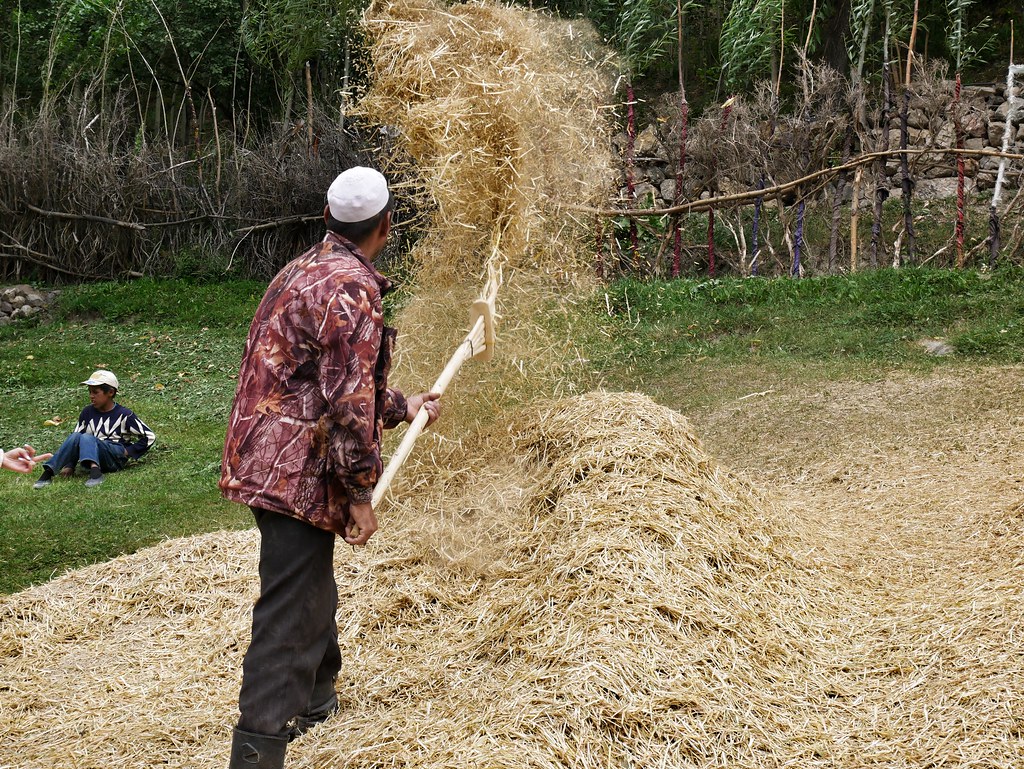 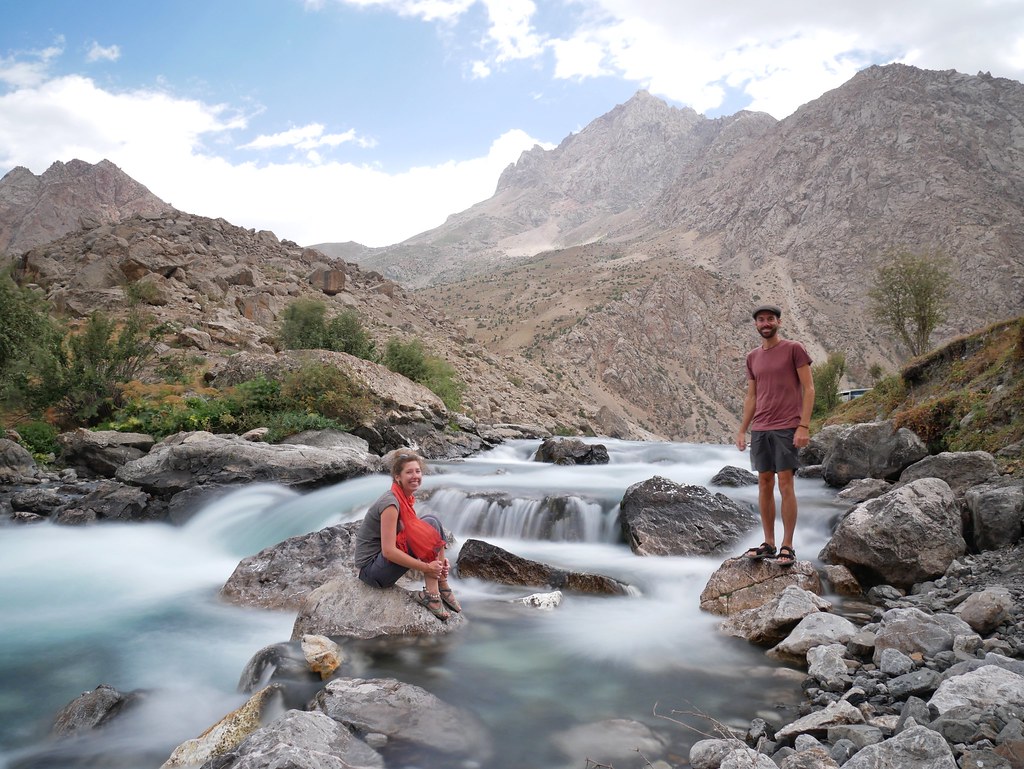 We walked all the way back to our homestay which took a few hours. When we stopped beside a lake for some snacks we noticed the German group (titty lady and co) were also along the shores. One of the men got up and waddled along the lake until he was right in front of us and then he began doing lunges. I looked around to see if it was a joke, maybe retired people get kicks from weird stuff like this, but the others seemed oblivious that he was busting shapes. What an odd bunch of people. It was a good way to see the locals living in the mountains. One father and son had two donkeys tied together so that they could walk in circles on a big bundle of hay, another chap was flinging hay in the air, no idea why but it was very photogenic. Gigantic boulders and piles of scoria from rockslides were a reminder of how dangerous the area was. The mountains were unbelievably steep and Tajikistan is prone to earthquakes so at any moment there could be a disaster. 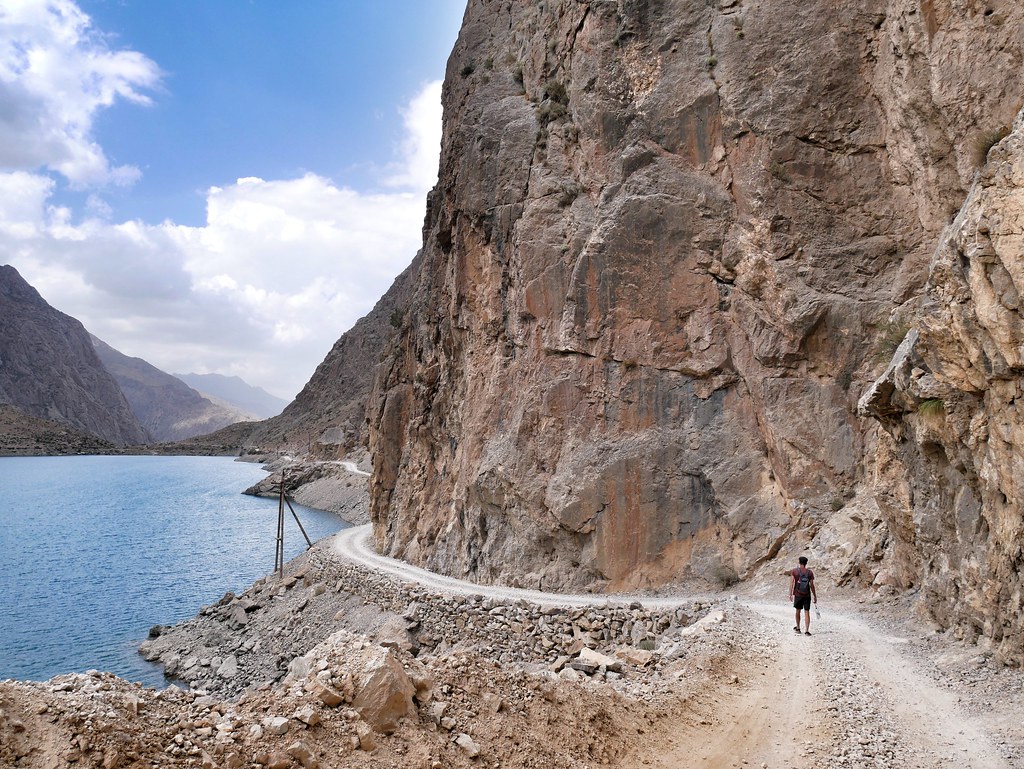 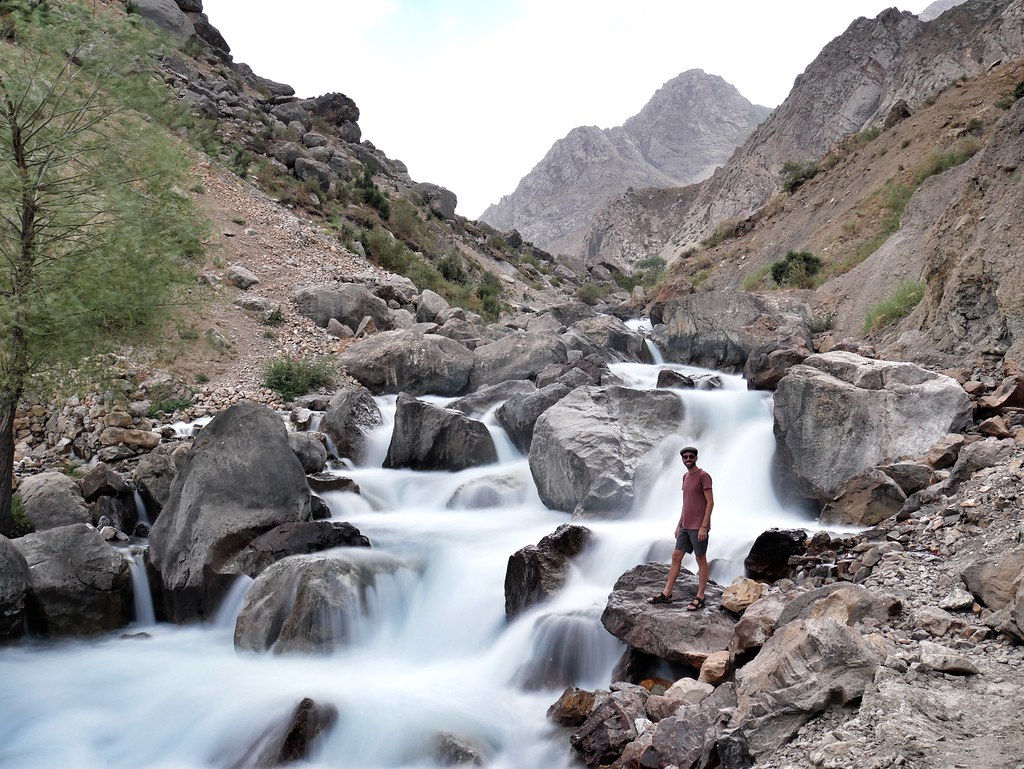 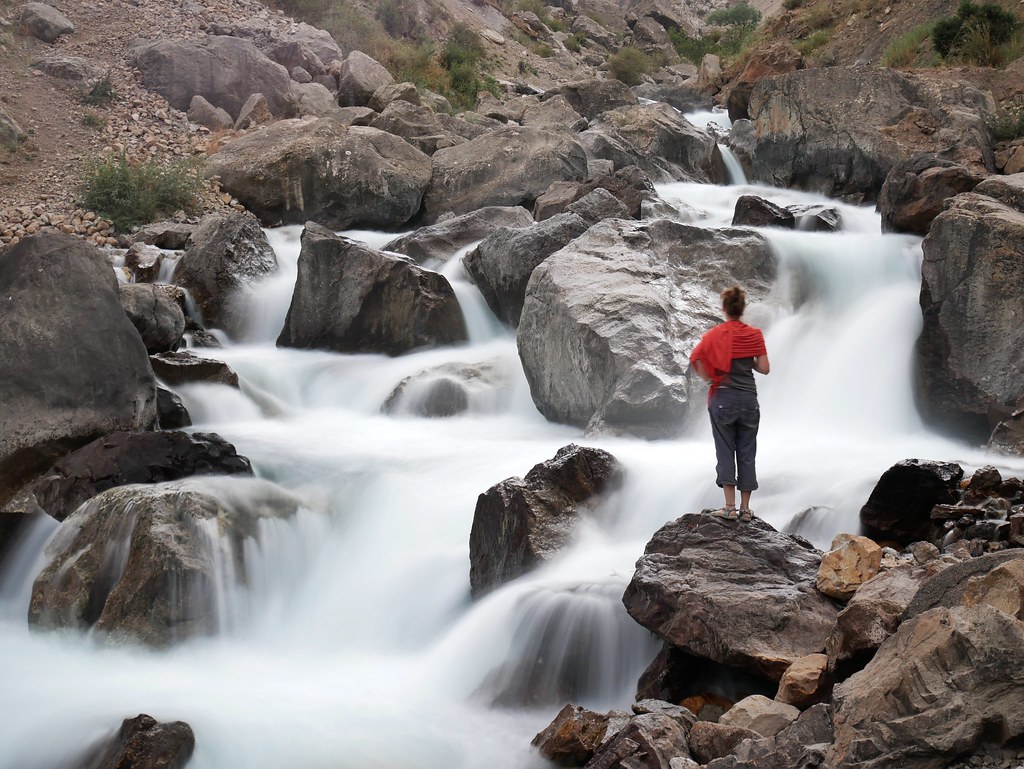 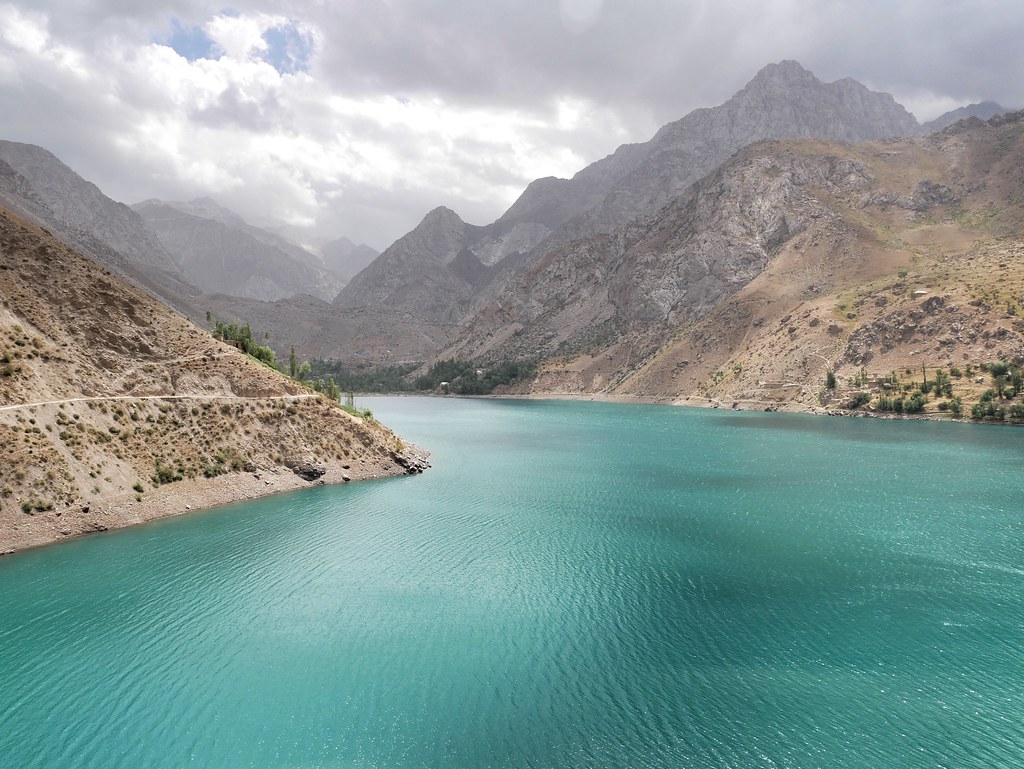 Sadly when we got back to the homestay we saw Craig’s cheap MP3 player had been stolen. There’s no lock on the doors so it’s a trust system. Craig had put it on the shelf beside his vintage phone and now it was gone. Everyone was so nice that we didn’t think the family could have stolen it so we checked everywhere, pulling the bed out and revealing years of filth but no music player. The thing only cost £3 on Amazon and the battery only lasted 30 minutes, but inside was a £10 memory card which was a shame. It was going to be a really hard thing to ask Jumaboy, especially having to act it out charades style as he didn’t speak English. But everyone had gone to sleep and by the time we woke up we didn’t feel it was worth bothering with. It was just a principle thing but it seemed easier to not say anything. A slightly sour taste was left in our mouth, but even still, the people were so kind that we had to put the thought at the back of our mind and hope it wasn’t intentional, maybe a kid picked it up and forgot to put it back, or even a guide with some other tourists could have taken it, we will never know.

Jumaboy took us back to Panjikent and the lakes all looked totally different in the morning light. Blue lakes were now like liquid ink but even without the sun touching the water the clarity was still astounding. It really was a beautiful area and well worth a visit. Even with a couple of downers, we loved our two nights in the homestay and Jumaboy really made our stay easy by becoming our chauffeur. On the drive he pointed out the road workers and suggested they will asphalt all the way up the lakes and he gave a thumbs up and said tourism. So he’s happy that the place will become more accessible as it’s currently a rough dirt track and we were happy that we’ve seen it now, before tour buses flock here. 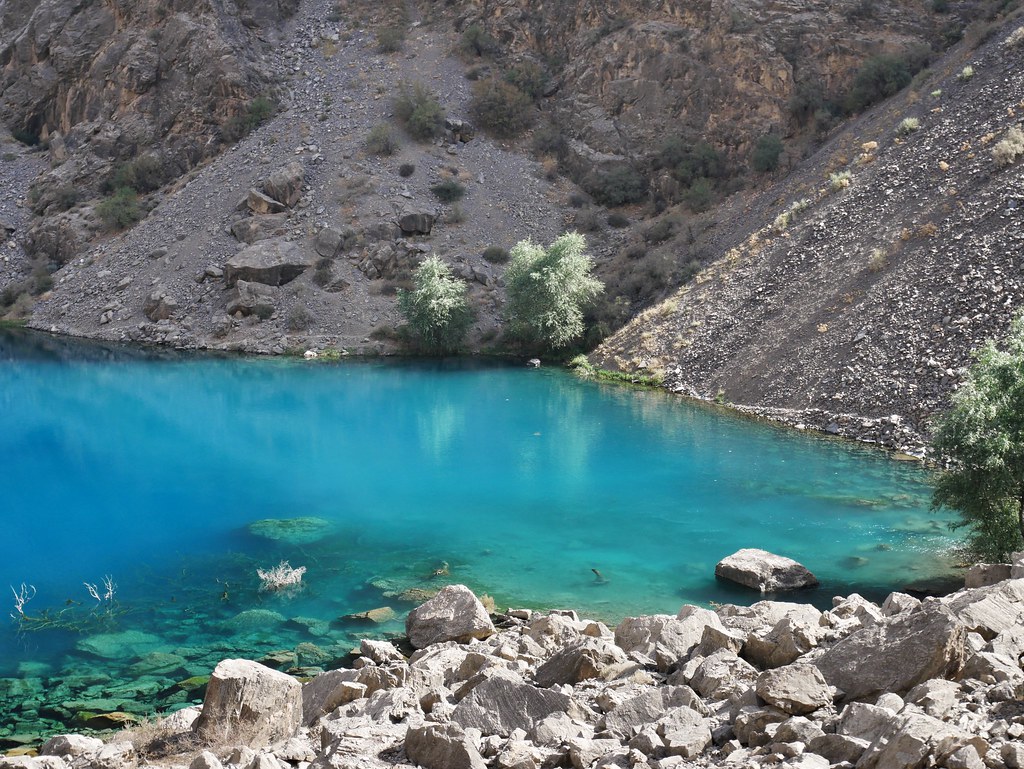 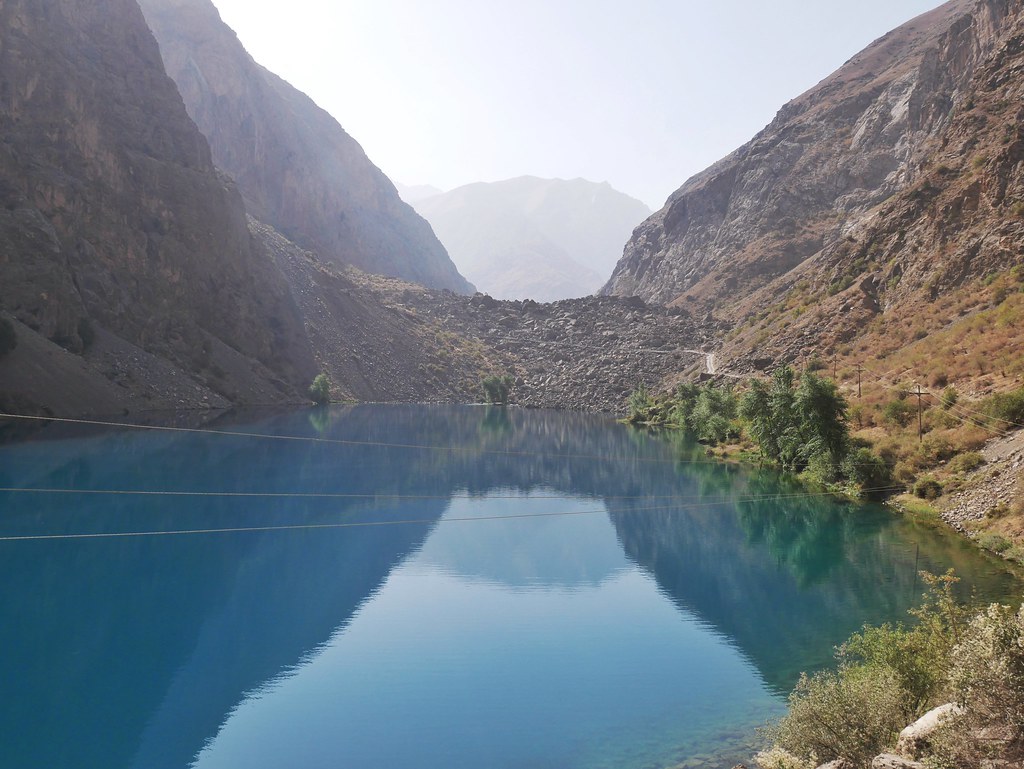 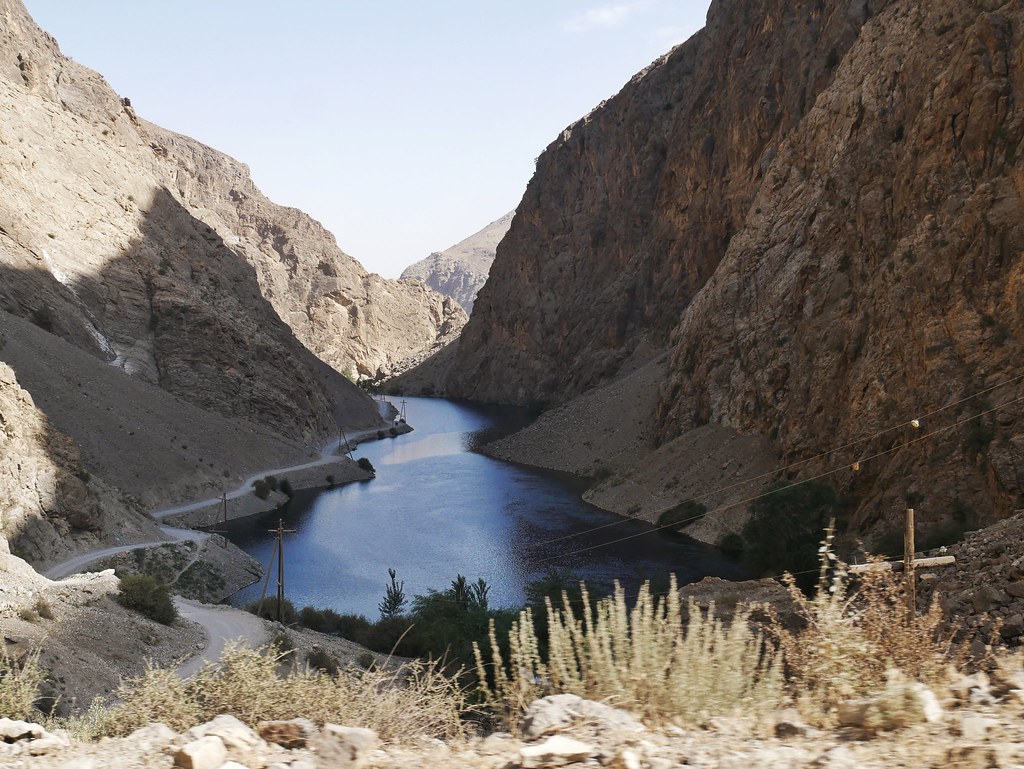 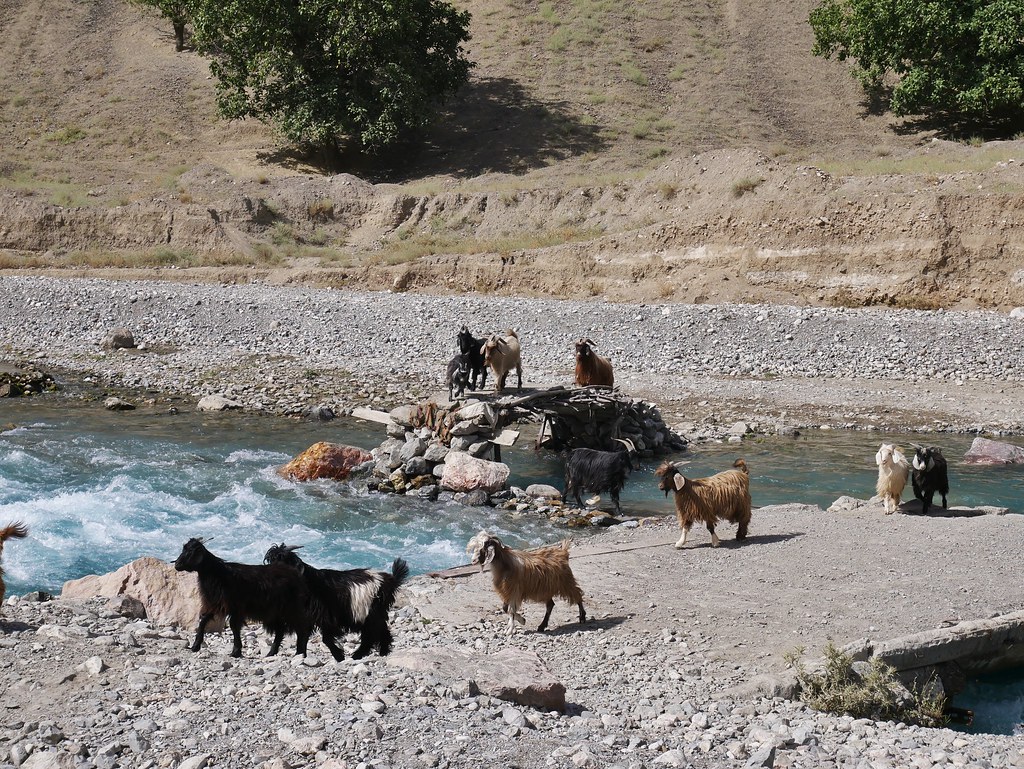