An evening ferry took us across the relatively calm open sea to Svolvær on the Lofoten Islands. It was a shock to the system arriving in such a big town after living in tiny Nordskot for two months and only seeing about 15 different people. We shuffled along the icy pavement past large modern buildings and groups of people who filled the fresh air with the rancid smell of cigarette smoke. It was an ugly place but we just needed to spend one night there before our bus to Vesterålen the next day. We booked the cheapest hotel we could find which was a ‘Fast Hotel’ where there’s no staff and we were given a pin code to enter our room. It was a great concept and a nice room but the bathroom stank of raw sewage! It was quite unbearable and of course there was no staff to contact and change rooms. 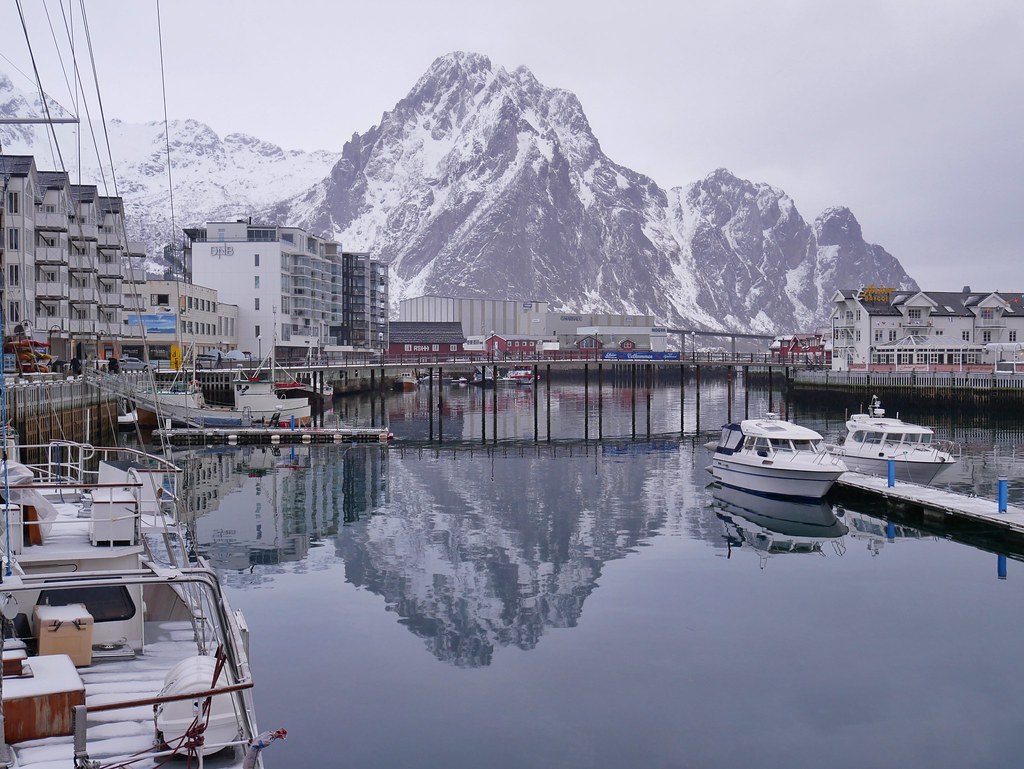 Our bus to Sortland in Vesterålen wasn’t until 12pm the next day, so we woke early to take a walk around the town. It was snowing but we could still see the huge peaks that surrounded Svolvær. We actually came here in 2014 on our big roadtrip but decided not to enter the town and instead hiked the nearby mountains to an amazing place called the goats horns where two bizarre rocks shoot out the side of the mountain and crazy climbers jump from one to the other. 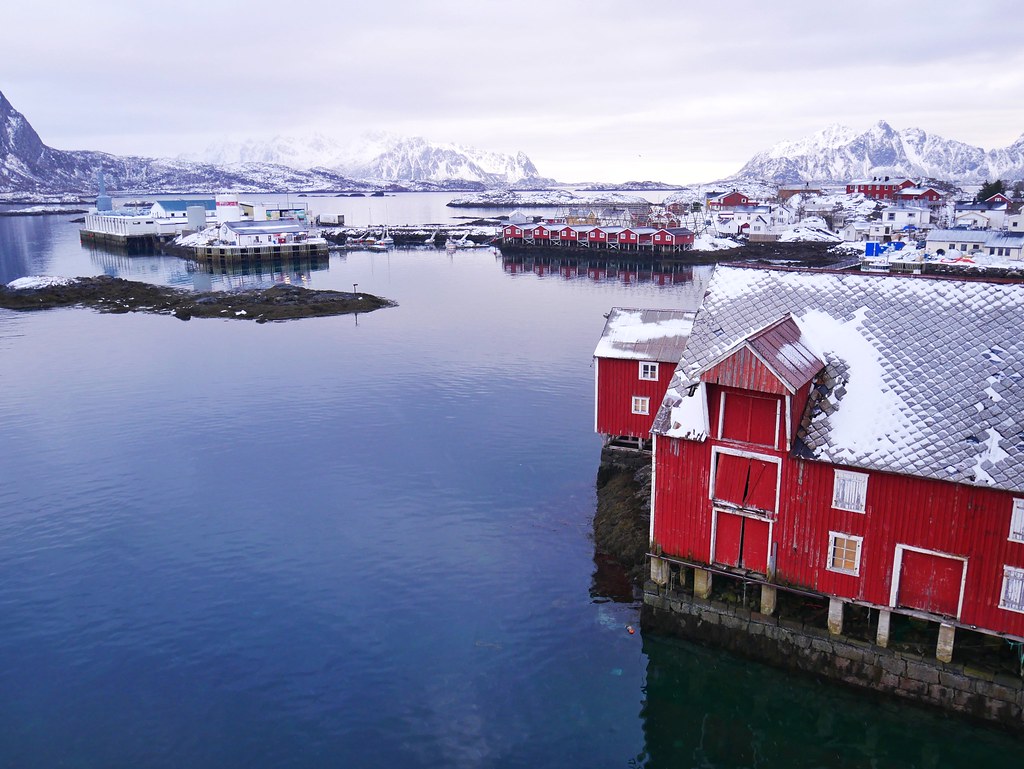 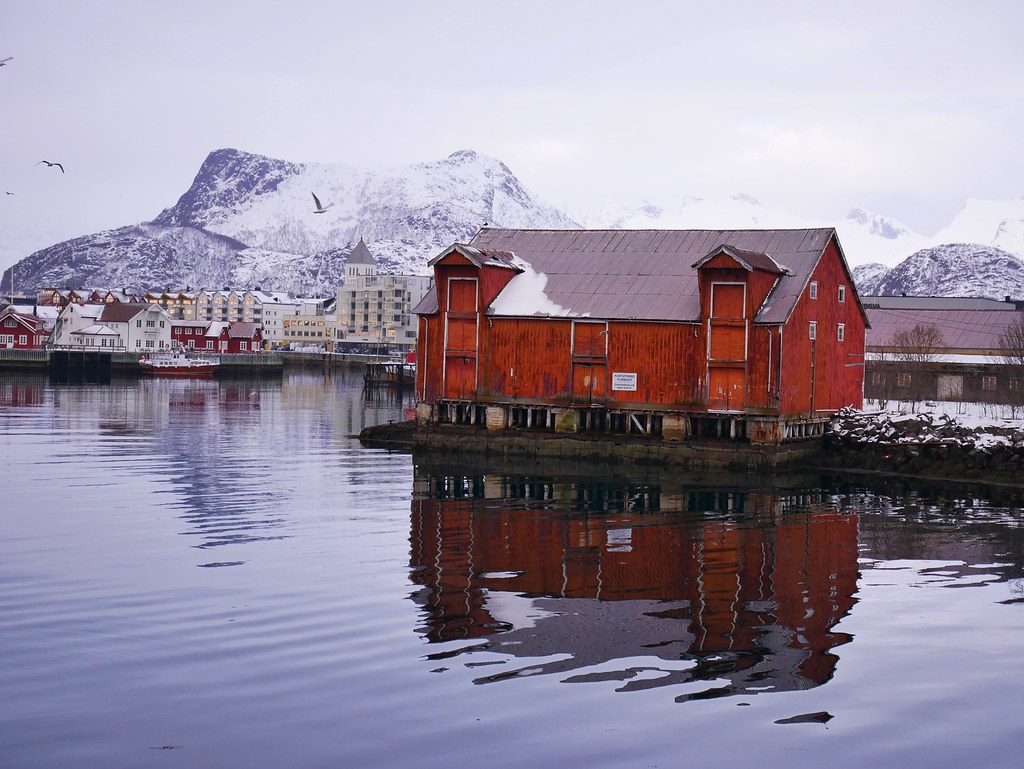 Except for the surrounding mountains, Svolvær didn’t look much better in the daylight. There were lots of factories on the waterfront and dirty water around the marina. We wandered across a large bridge where there was an abandoned looking island below us. Rustic red cabins were built on stilts along the shoreline and the mountains were reflected in the calm sea behind them. It was the nicest part of the town and after walking around a final island with lots of rental cabins, we headed back to our shit smelling hotel, grabbed our backpacks and waited for our bus in the snow. 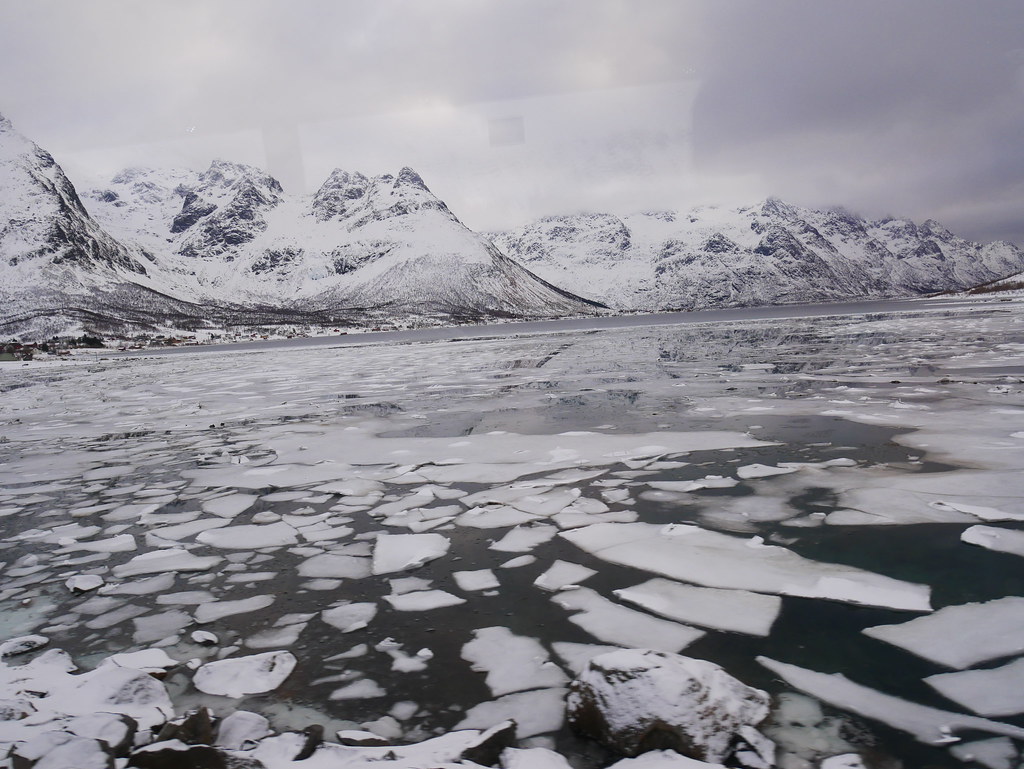 I was exhausted and ready to nap on the bus but I couldn’t bare to close my eyes as the scenery we were driving through was so incredible. The sea was totally flat so the mountains were perfectly mirrored in the glassy water. Some areas were completely frozen while others were melted and scattered with chunks of ice. The Lofoten Islands were our favourite part of Norway when we visited in 2014, and we were certainly reminded of their beauty. The mountains just rise out of the sea and it’s hands-down some of the most dramatic scenery in the world.

The bus took a shortcut by driving onto a ferry and soon after we arrived in Sortland, the main town in Vesterålen. We then took another bus to Straume in Bø where we were picked up from a gas station by a Swiss and French volunteer and taken to our new base for the next two months. Here we will be volunteering at a guesthouse, restaurant and activity centre right by the sea. Its completely different to our previous position and we’re now sharing a house with other volunteers, eating together and working together.

On our first day we weren’t needed to help out until the evening so we went on a walk to a nearby hill. At the top we had a 365 degree view of mountains, frozen lakes, pine forest and sea. The location didn’t wow me straight away to be honest, Steigen will be very hard to beat as we lived right on the jetty in a private apartment with huge peaks on our doorstep. But there’s no denying that it was still a beautiful and wild place, we’ve just been very spoilt beforehand. 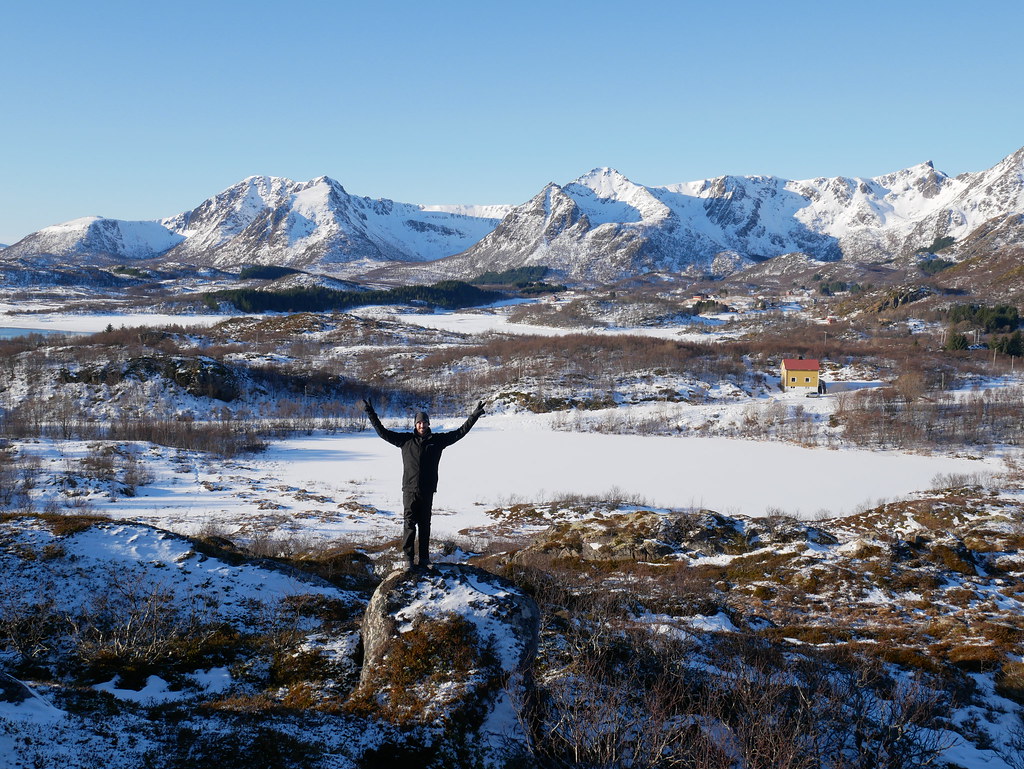 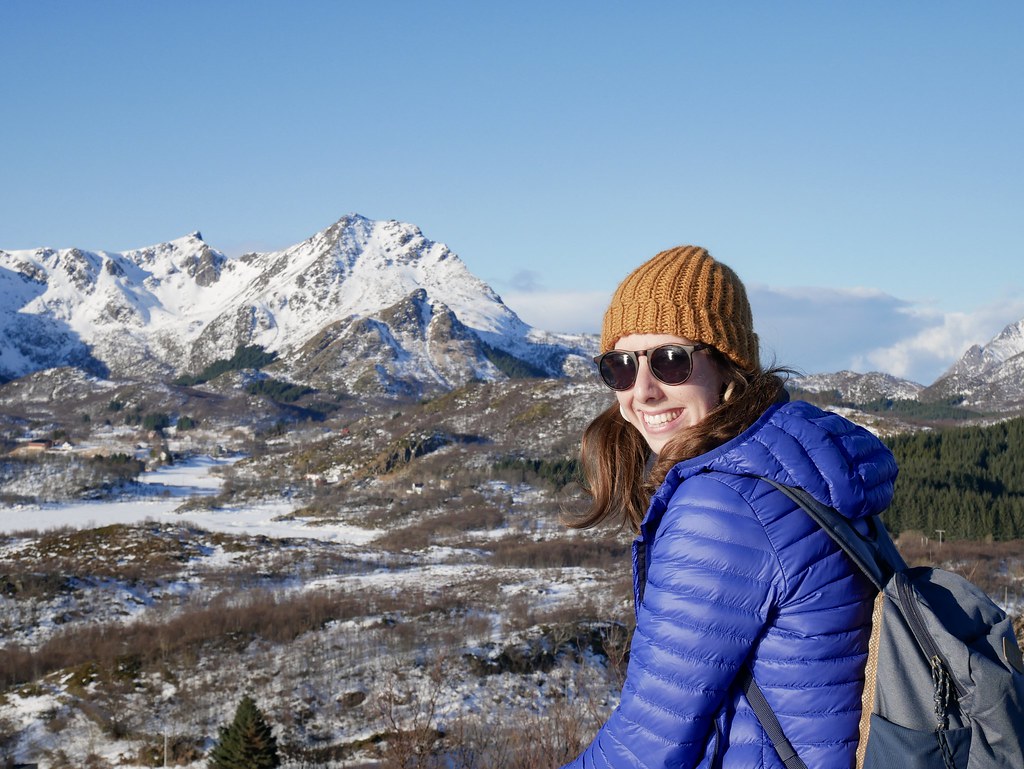 In the afternoon we were allowed to join a kick-sled tour on the biggest lake in Vesterålen which one of the volunteers was guiding. A kick-sled is like long ice-skating blades with a frame to hold onto and a seat on the front, sort of like a zimmer-frame built for icy conditions. There’s two places to pop your feet on the blades and you basically kick with one foot to pick up speed and then once your gliding you put your second foot up. We began sledding through a snowy track in the woods, kicking along until we reached a hill and we could glide down which was so much fun, although it took me a while to work out how to steer. I kept veering off track and landing in deep snow but it turns out I was just steering way too aggressively and it just need a gentle nudge. 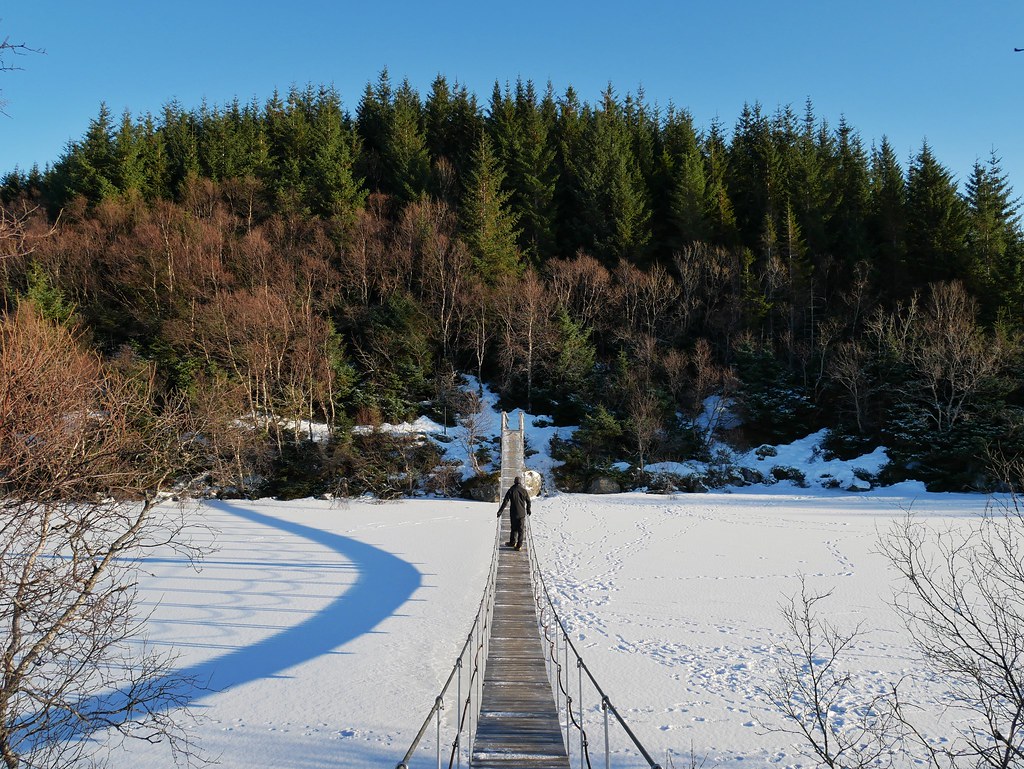 We soon made it onto the frozen lake which was actually covered in a thin layer of snow so the conditions weren’t great, but it was still really fun. There was a section where patches of snow had melted so we really flew along the ice. We stopped at a little hut where we lit a campfire and enjoyed some hot coffee and chocolate before continuing to kick and glide along the ice as the sun set behind the hills. 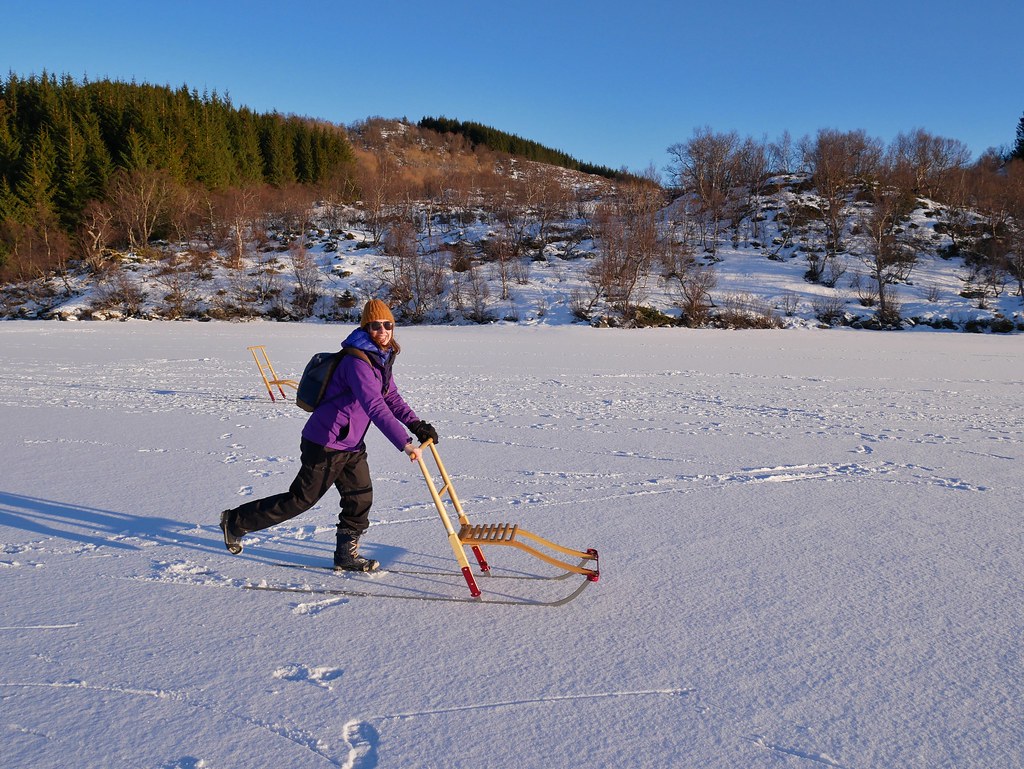 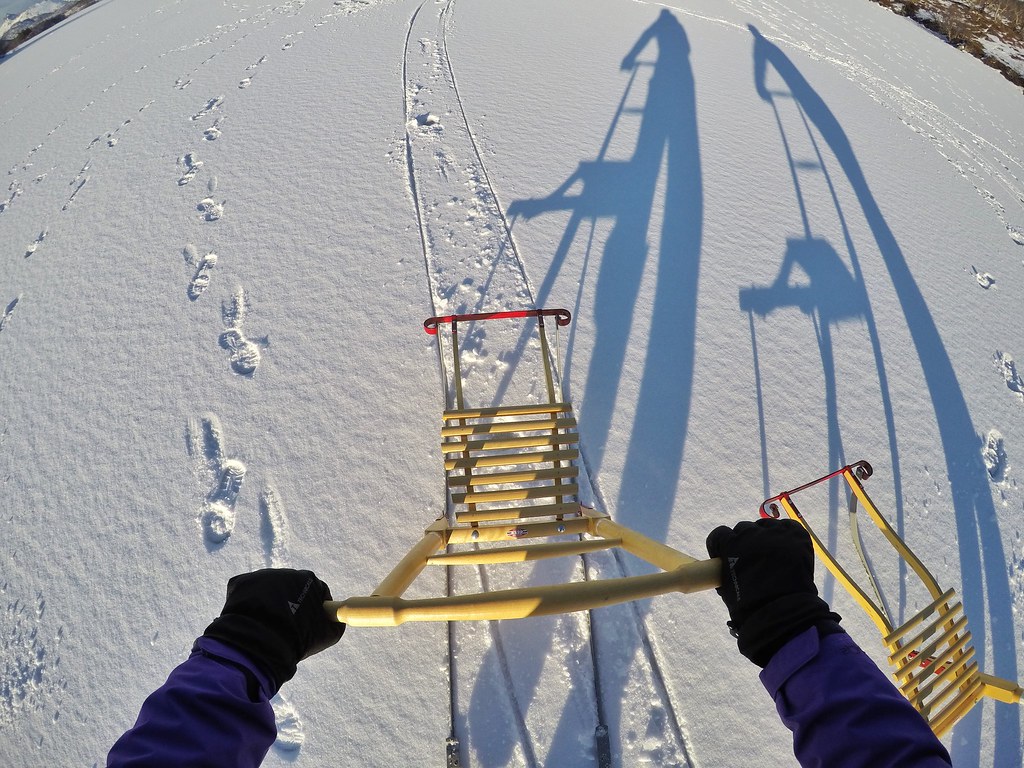 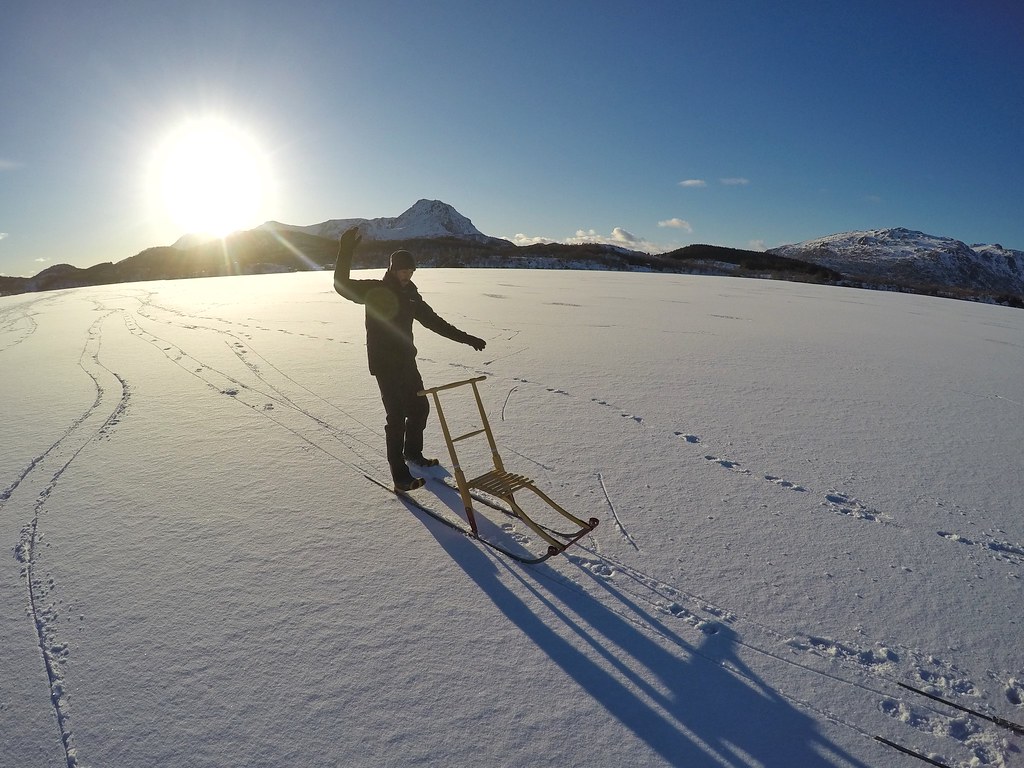 That night we had a little aurora show so I stepped outside and began snapping photos. Even though the village is tiny with only 20 habitants and a 10km drive to the nearest shop, I found myself frantically running up and down the road trying to escape the lampposts and houses. We have two months at this new volunteering position though, so I have plenty of time to find the best spots to photograph the aurora, and it’s quite nice having the colourful houses in my photos for a change. 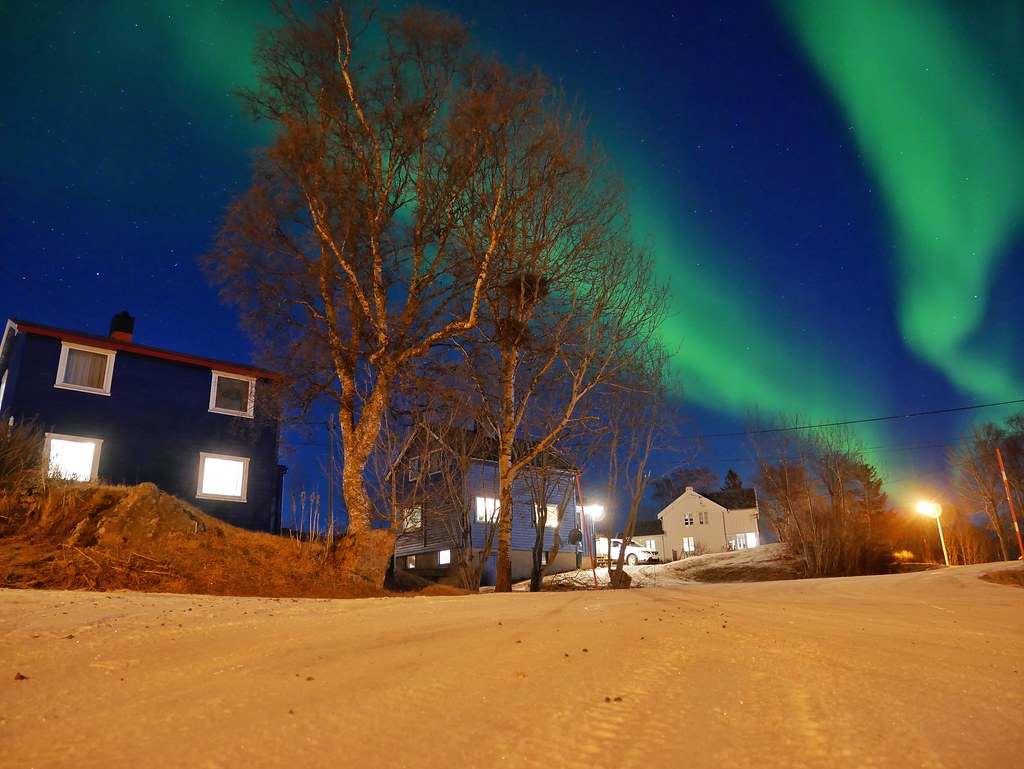 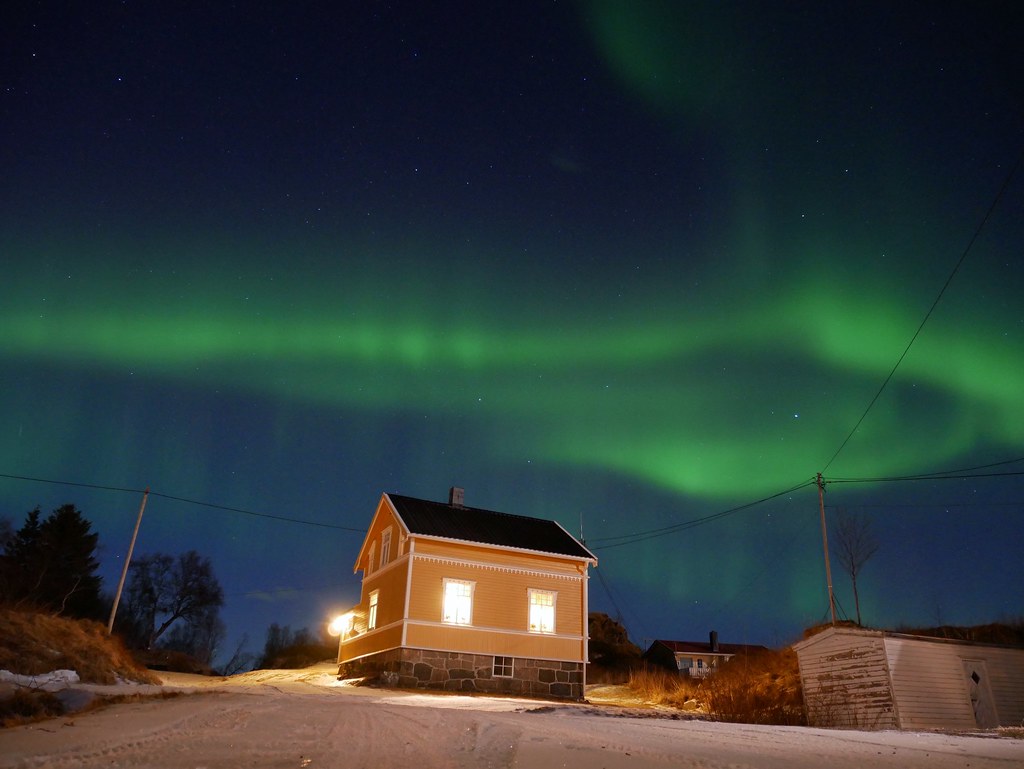 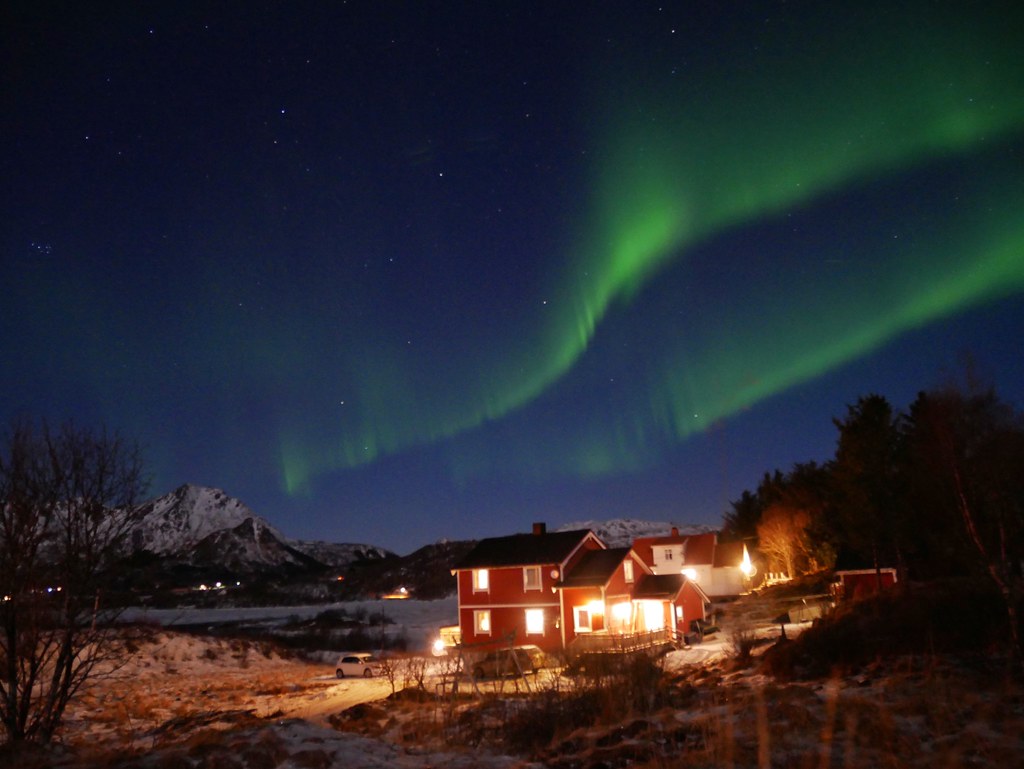