Marrakesh was our final destination in Morocco and it was quite a shock to the system. Suddenly there were tourists everywhere and we couldn’t believe how little everyone was wearing. I’d consider what some women were wearing as slutty if I saw them in England, let alone in a Muslim country. Even though morocco isn’t strict with the dress code it’s more of a respect thing and I was bloody embarrassed seeing fellow Brits in skimpy hot pants, butt cheeks poking out and cleavages on show. There were also lots of beggars and people selling fake watches and iPhones and we literally couldn’t go a few minutes without being pestered. 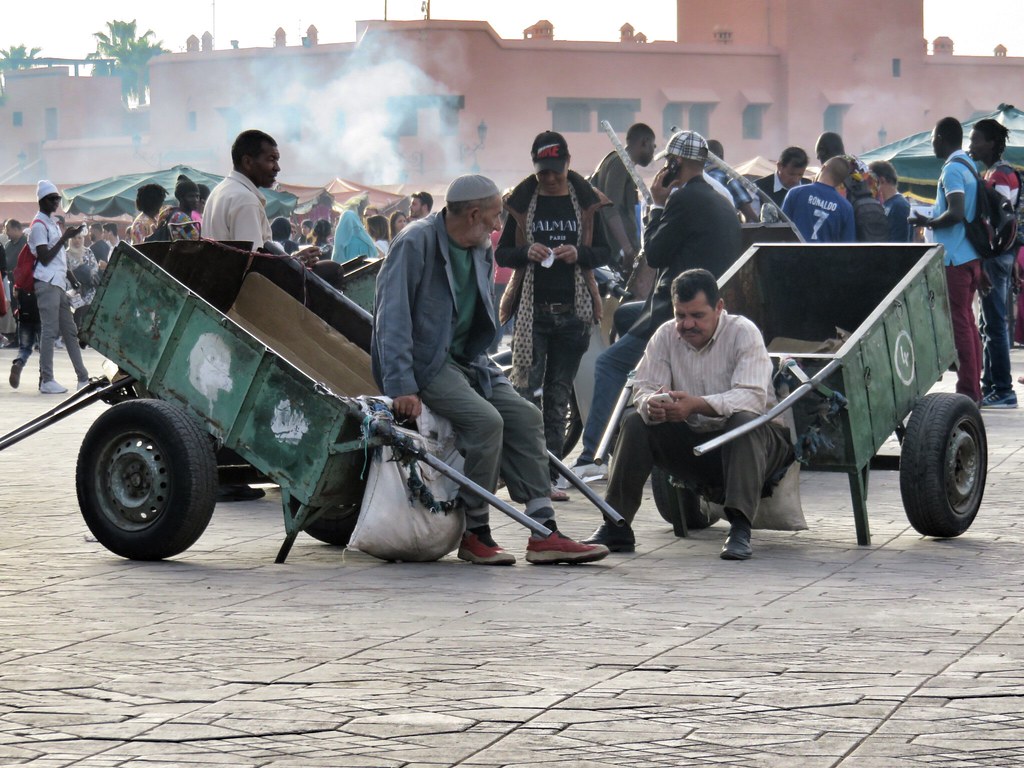 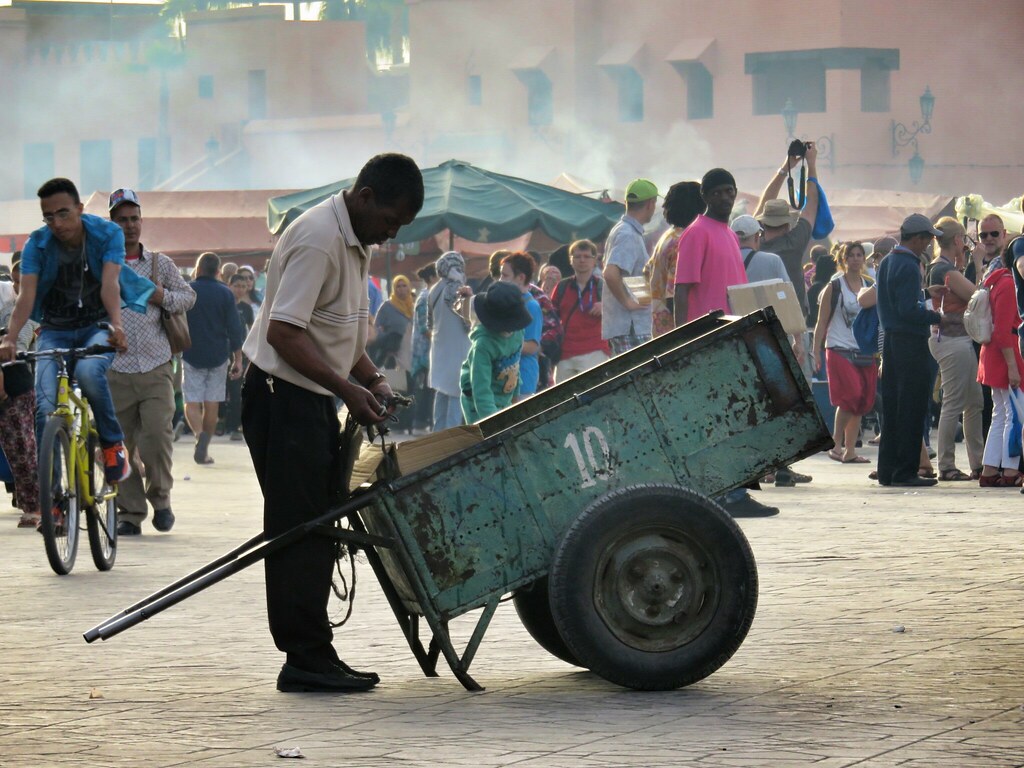 We were staying in a riad close to Jemaa El Fna which is the main focal point of Marrakesh. It’s this square where the activities all unfold, especially at night time. I enjoyed the buzz of the square, there was a sort of carnival feel about it, but I also hated lots about it. For starters they had monkeys on chains which tourists pay to have photos with. As if that wasn’t bad enough they actually dressed the monkeys up in tutus and it was obvious that the monkeys were distressed, trying to pull the chain to loosen it from their necks. There were also snake charmers who played a flute to the ‘mesmerised’ snakes. I’ve since read a sad article about them not actually being charmed and instead their being starved, so it’s a combination of the snakes posing for an attack, associating the flute with being fed and begging for food. The noise of the flute is so familiar that if you ever heard it again you’d think you were back in Marrakesh. Then other workers would sling snakes over tourists shoulders and demand huge amounts of money after they’ve had a photo taken.

The square was full of circular groups of people crowding around attractions. There were lots of musicians playing traditional guitars and drums but they’d somehow connected them to an amp and it sounded awful and so untraditional. A couple of men in Moroccan gowns danced in a very trance-like manner in the centre while spinning their heads to make the tassels of their fez hats spin, sort of like a nipple tassel on a burlesque dancer.

Some people were doing acrobatics, others had mini golf courses and one guy just had a little green mat with two bottles on it and you had to roll a football and knock over both bottles. It only cost 5p to play so I had a go and got lots of support from the crowd seeing as I was the only female taking part. There were even some amateur boxers which had a huge crowd of people cheering and betting. We waited a good 10 minutes for it to start and after a couple of girl-punches they both gave up, I think we were the only people that found it boring, plus some creep behind me ‘accidently’ pushed his crutch into me on two occasions so I was happy to leave before watching the next competitors. Some people in the square were story telling in Arabic which had the locals gripped and another man seemed to be a sort of witch doctor, pulling a lizard out of his bag and displaying it to the crowd along with some dried animal corpses. 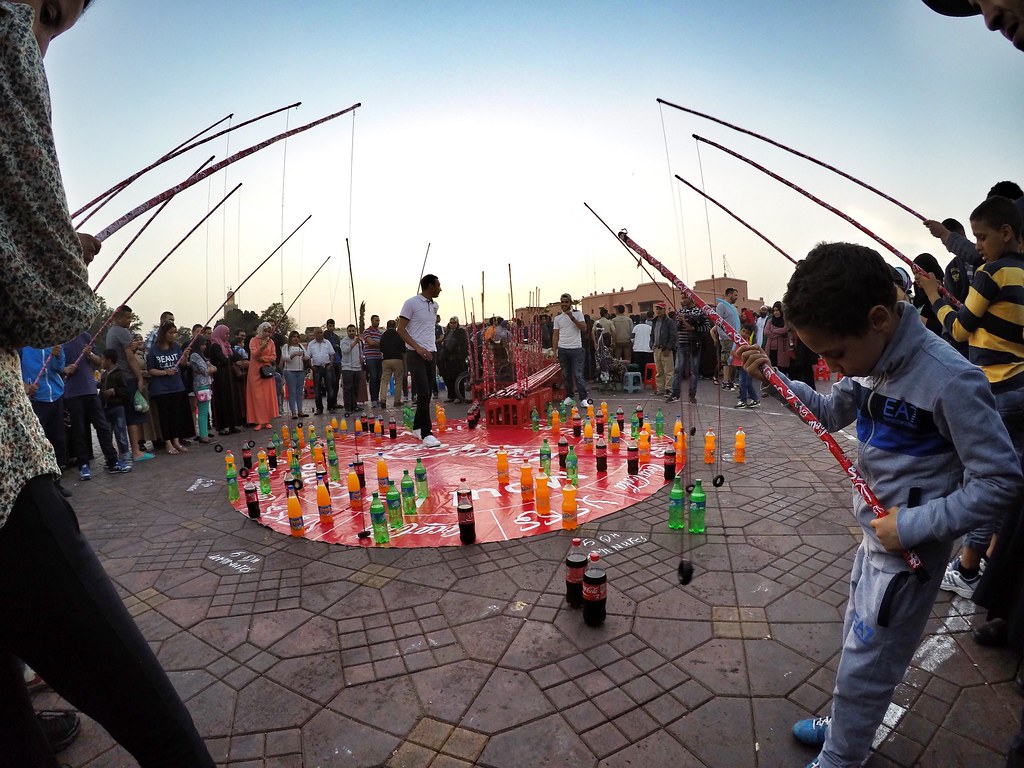 Tons of food stalls set up at night and caused the whole square to fill with smoke from the barbecues. I’m sure the witch doctor appreciated this mystical smoke for his stories. We wandered along the food stalls and a pestery seller was shoving a menu in our faces. When we politely declined the menu he suddenly turned really rude and said “no point walking down there, we’re all selling the same shit” and I was so absolutely shocked to hear that come out of a Moroccans mouth! There were also rows of juice sellers calling out for us to buy a freshly squeezed juice saying theirs was the best or the sweetest. 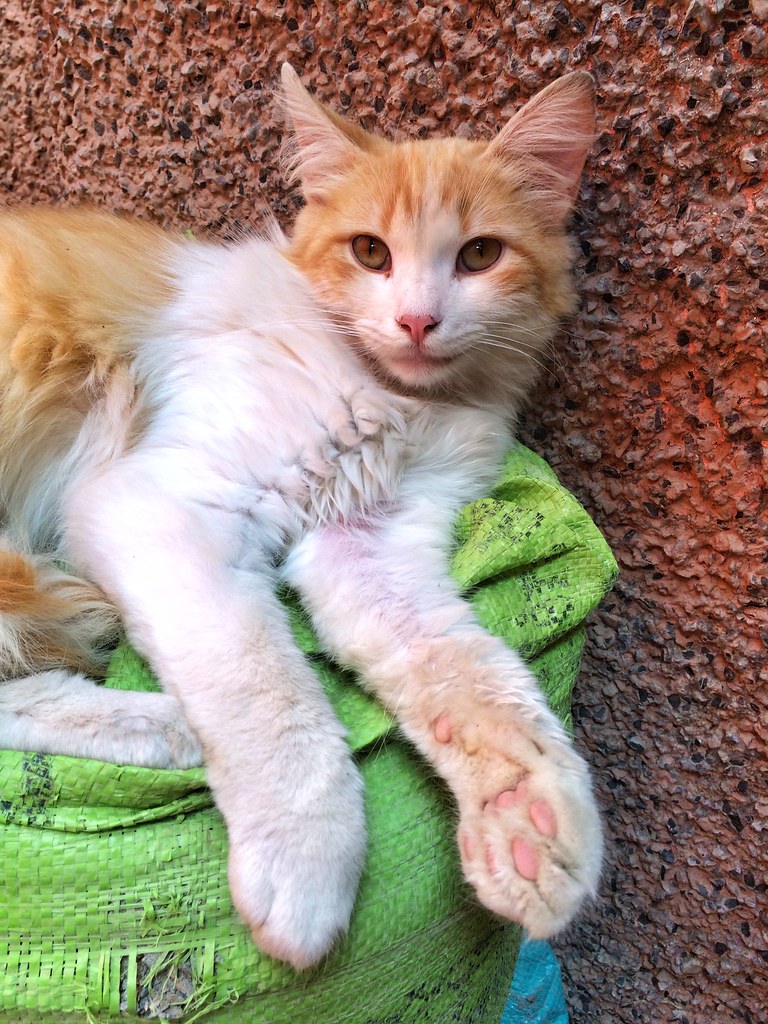 The next day we went shopping and I could finally buy some souvenirs now that we were leaving. The souqs of Marrakesh are a maze of alleys, some covered with a cross-hatch wood to keep the hot sun out and others just open top lanes. A lot of the souqs focused on specific things so one minute we’d be surrounded by handmade leather items and the next we’d be wandering past carved lanterns or pyramids of fragrant spices. We saw locals leaning into butchers shops whilst nonchalantly resting against slabs of meat. There was a line of dried fruit sellers where the men had an open hatch to stand in, surrounded by their produce which they served with an extra long scooper. The souqs were heaving with people and it was so much busier than Fez. I guess Marrakesh just sees too many tourists, and too many of them are happy to throw away money without bartering, which made our life rather difficult. But we asked around a few shops for prices to get an idea of their lowest amounts as we walked away, and then we’d decide what we were happy to pay. The technique worked well and suddenly we had leather bags, poufs, perfume, slippers, teapot, glasses… and as far as we know, we got some great deals. One guy actually made me feel really bad though…the ceramic shops in Essaouira had price tags up and everything was so cheap, like €1 for a little pot. And when I tried to get that price in Marrakesh they were so offended. At the end of the day, I know if they don’t budge from a price and let me leave empty handed then they really can’t go any lower, or their very stubborn sellers. So I ended up spending a bit more on them and bloody stumbled across a ceramic shop later in the day right by our riad that had cheap prices like in Essaouira, god damn! 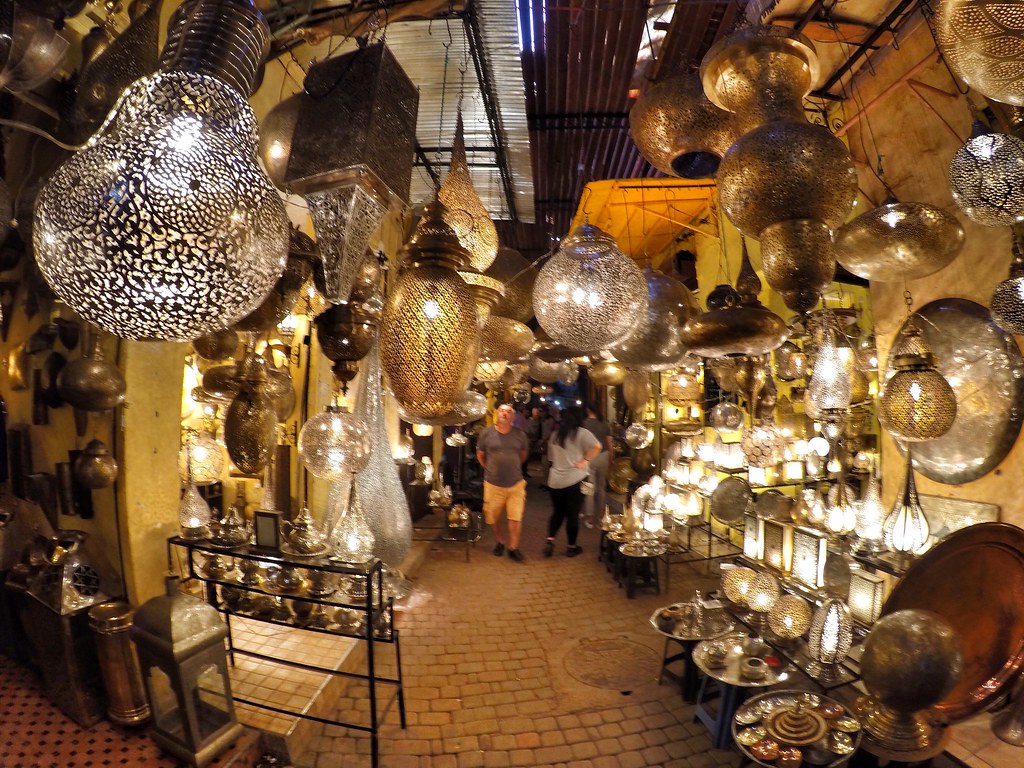 One day we headed to the Jardin Majorelle which was saved by real estate developers in 1980 when Yves Saint Laurent and Pierre Bergé acquired it. I visited the garden when I was younger and nothing had changed, I even recognised some boobie-shaped cacti I’d seen 10 years ago and they’d just really grown. There was a huge queue to enter and the price was pretty dear at €7, it was just as busy inside and women had specifically worn fancy dresses to do amateur photo shoots. There were some cool palm trees and cacti but to be honest I couldn’t wait to leave the place after just 10 minutes. We walked back to the medina via the bus station and round the back was a big open area clearly used as the lads latrine as it stank of piss and men lined the wall, then we also saw a western couple taking a romantic selfie right by the loo… 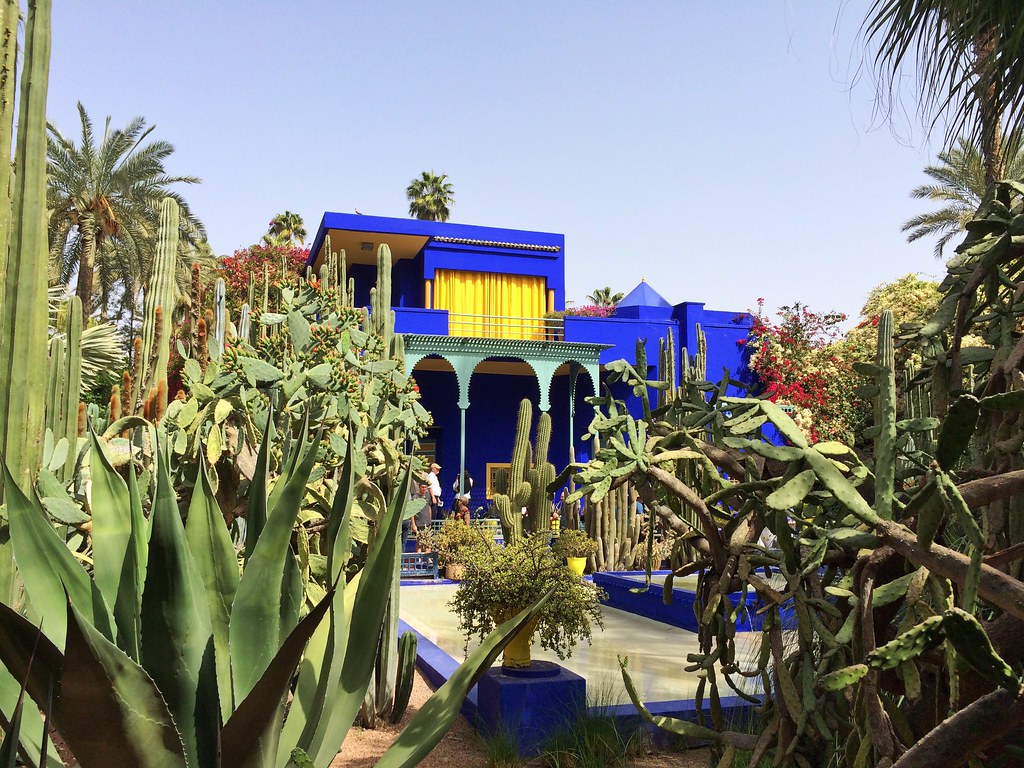 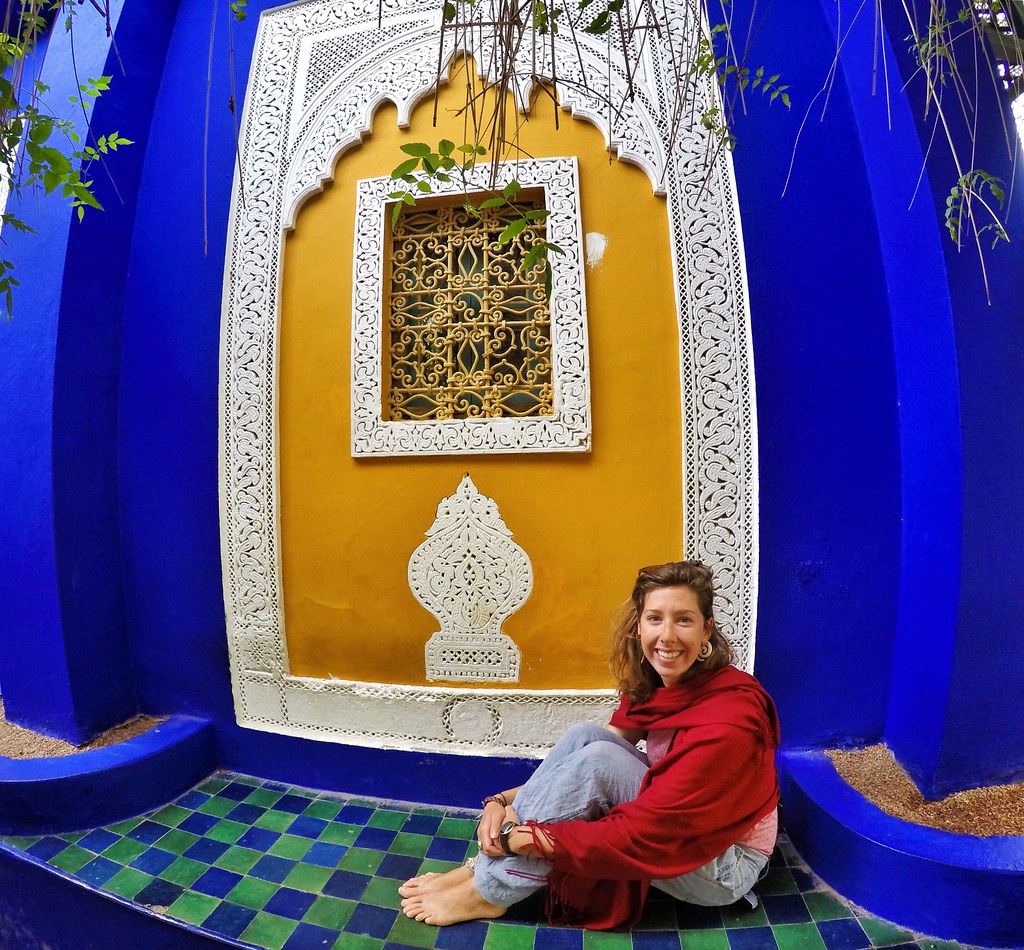 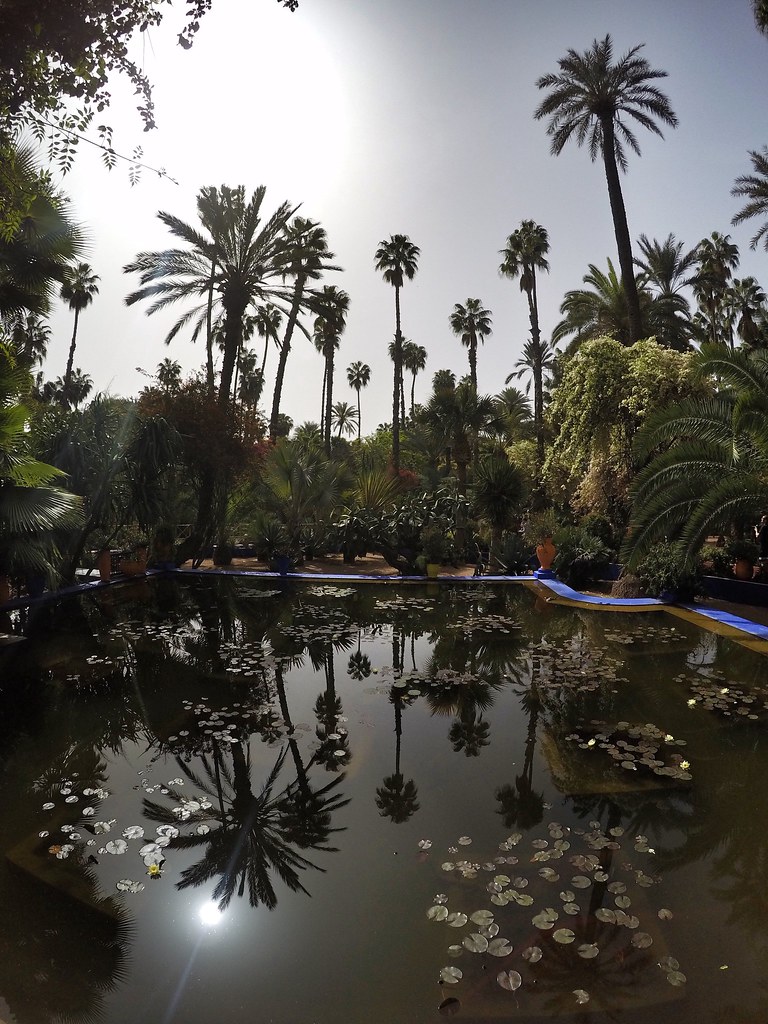 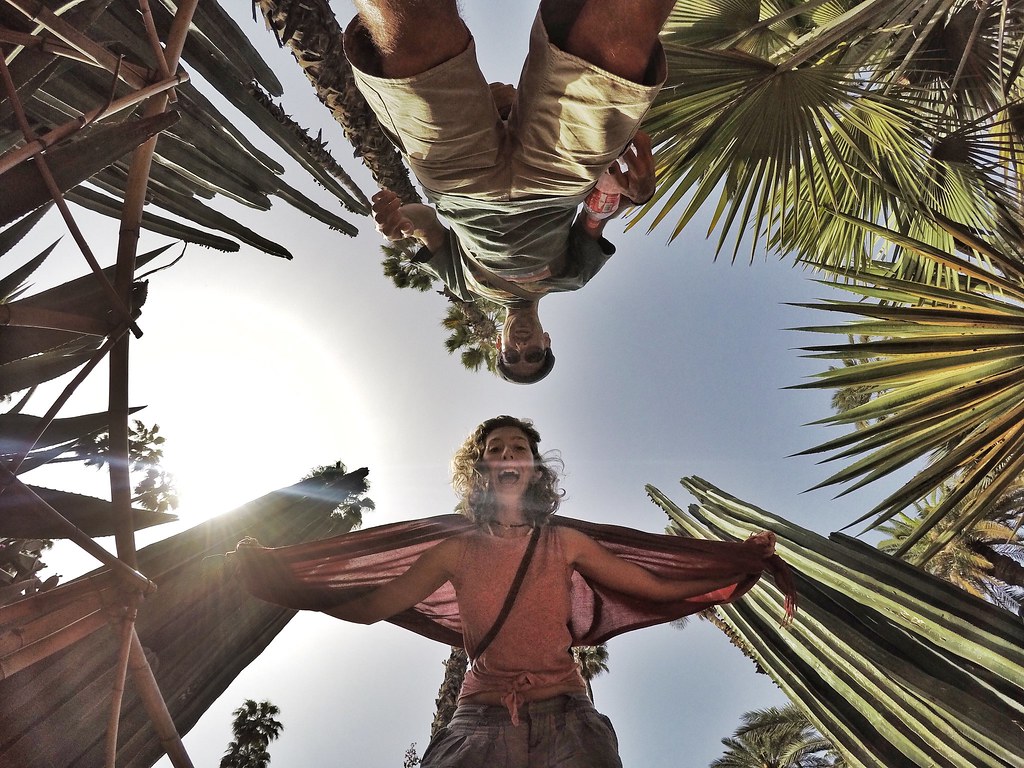 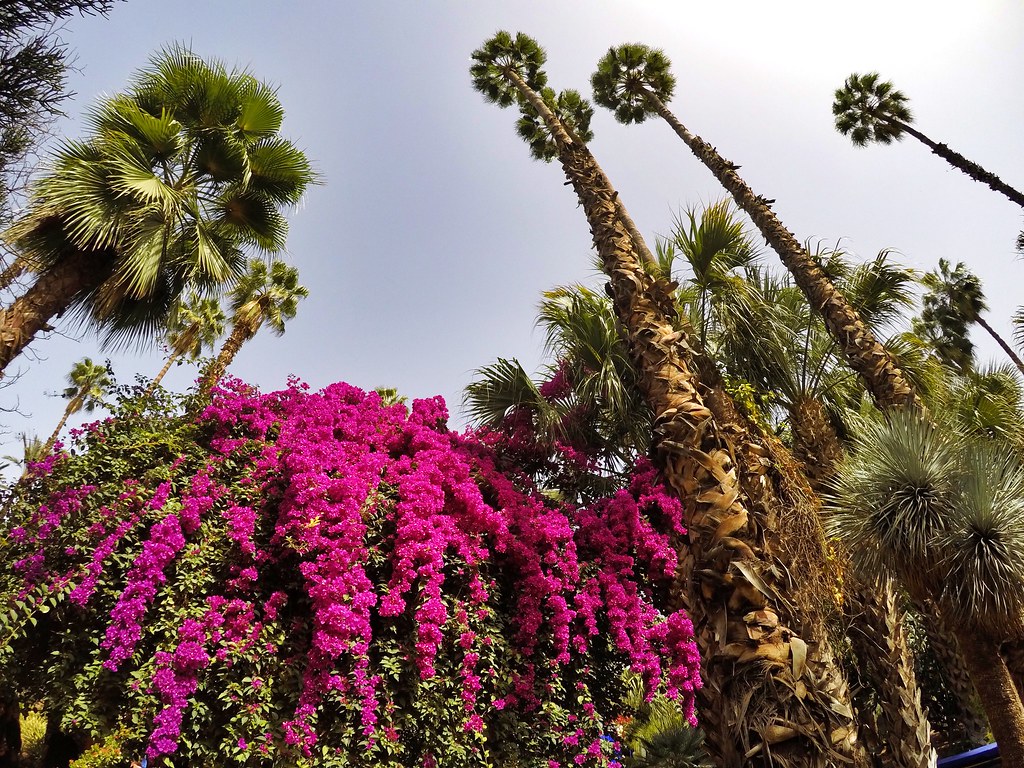 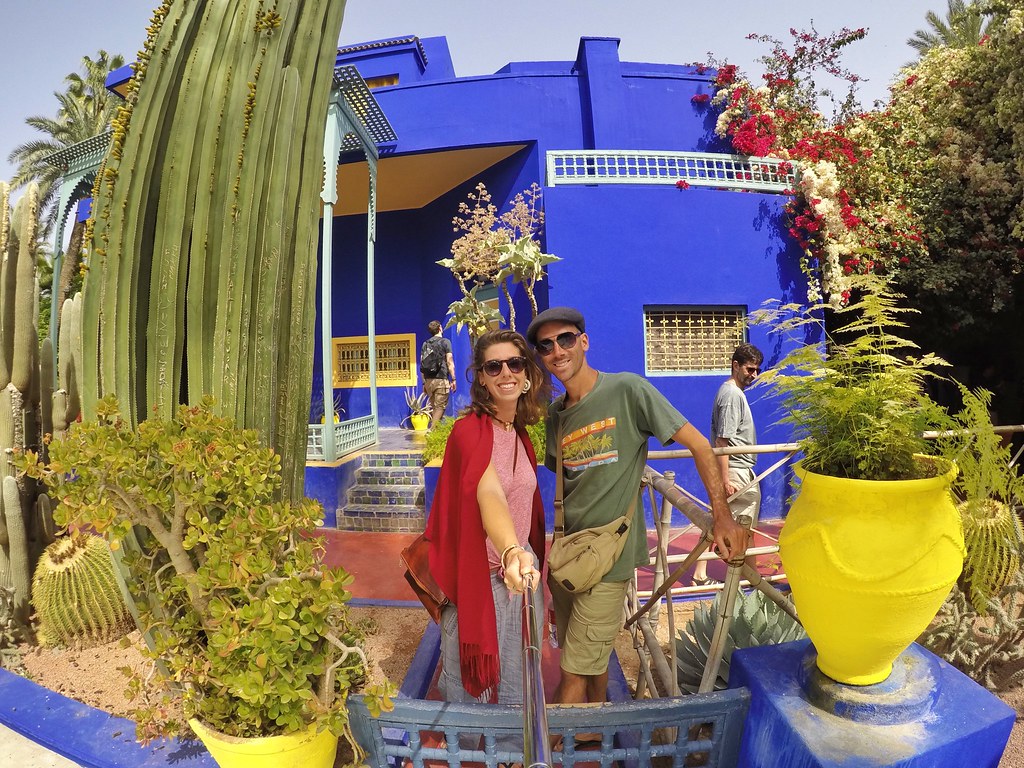 One day we ventured south of the medina through the Mellah which is the Jewish quarter. It was quite rough on the edges with the odd derelict building, lots of crumbling walls and chipped paint. It was a really quiet area with hardly anyone around but a local boy pointed us the way to a synagogue. I think it was actually the first one we’d ever visited. The rooms downstairs had information about Jewish Moroccans in the olden days and black and white photos of them wearing elaborate outfits and silver jewellery. I lent on the arm of a large chair and read the plaque above it “this chair was where boys would be circumcised….” and my arm came off it at quite a speed! If Morocco currently lacks much hygiene knowledge who knows how dirty a vintage chair splattered with blood could be (clearly I envision it being a very dramatic scene). We also visited Bahia Palace which translates to Beautiful Palace and was once again packed with tourists. There were some beautiful details in the palace, lots of mosaic courtyards with lush plants everywhere. The doors stood tall like they were built for giants but decorated for a King and some had faded floral paintings on them. Intricately carved plaster covered the walls and the high ceilings were covered in elaborate paintings but I didn’t like how all the rooms were empty, not one room had furniture in it. There was one particularly colourful room which had fabulous stain glass windows where the colours all beamed through the room. But just trying to get a photo with the crowds of people everywhere was starting to drive me mad. 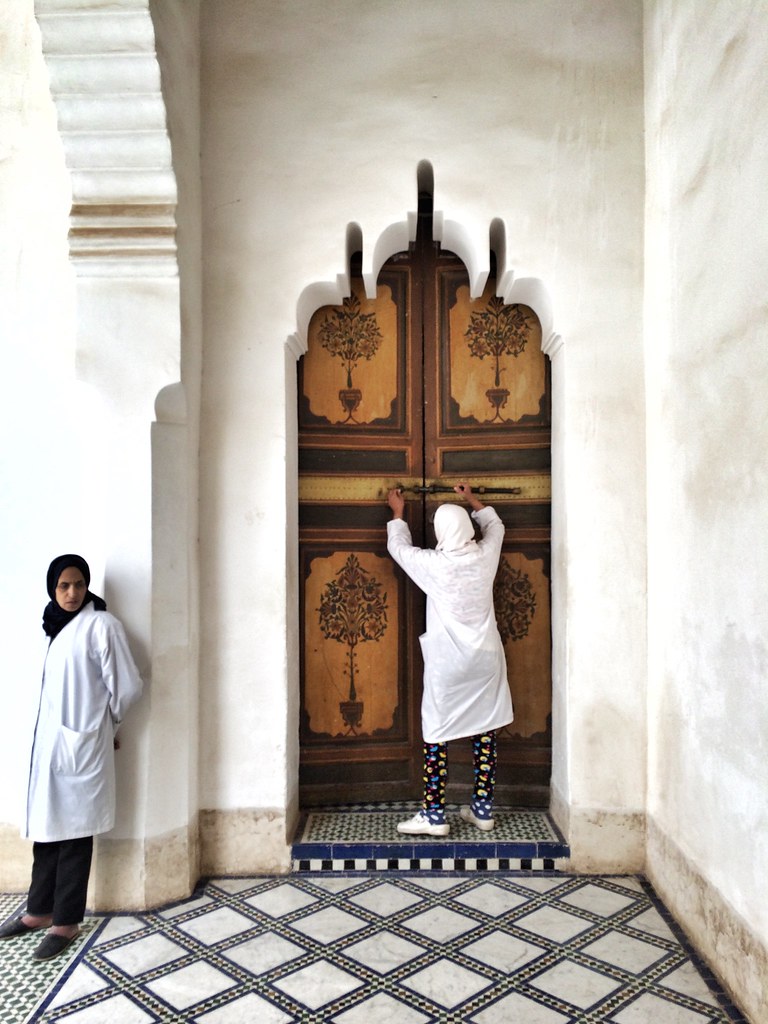 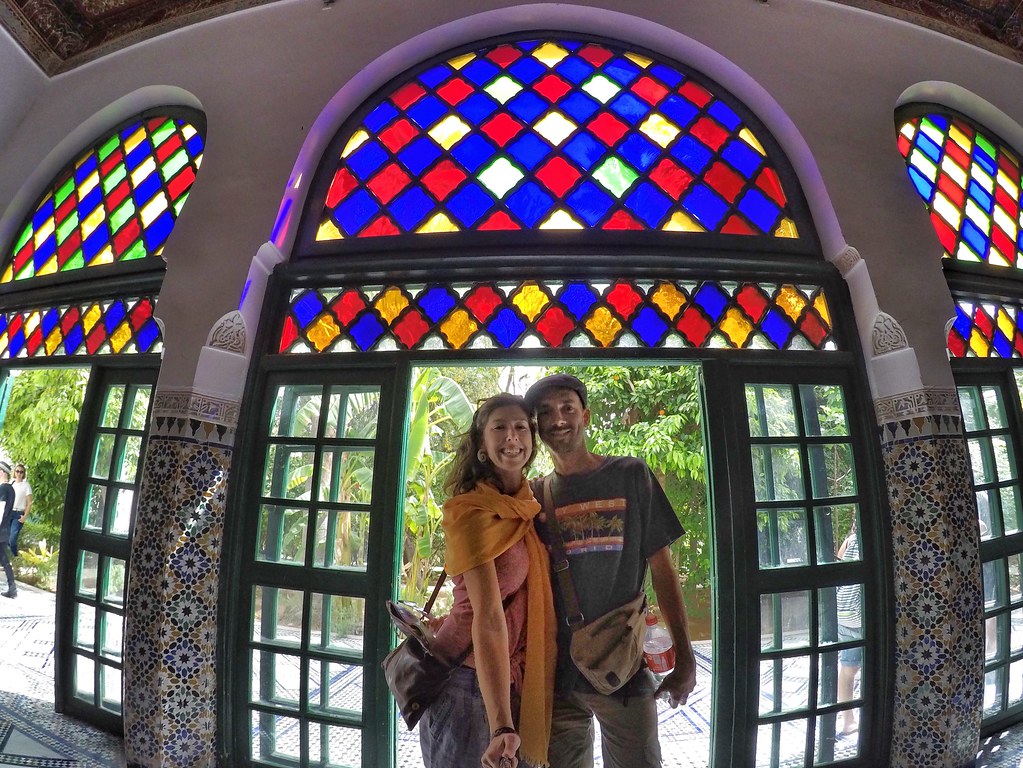 On the way back we went via the Koutoubia Mosque and it was one of the quietest areas of Marrakesh with no other tourists in sight which was a nice change. I must admit Marrakesh just wasn’t for us, we’d seen so many beautiful places in Morocco and Marrakesh wasn’t a ‘wow this is great’, it was a ‘wow this is way to touristy’. Even trying to print our Ryan Air plane ticket was a pain, one shop was charging €2 for one black and white print out and we actually laughed in his face thinking it was a joke, like when Moroccans say “20 Dirham…not 20 Euro!” to justify their overpricing. We even asked our hotel lady where we could print our tickets cheaply, she suggested a place nearby and said “it just costs €1” and we were shocked, I know it’s ‘just a Euro’ but in England that would cost 10p! Ain’t no Moroccan person paying €1, it’s just a tourist scam. Anyway, Marrakesh served the purpose for our souvenir shopping but overal I could easily leave it off my Morocco itinerary and visit the more authentic medina of Fez which didn’t have crazy motorbikes zipping through the lanes, it was all pedestrianised and very un-touristy in comparison. We did leave Marrakesh on a positive note though. We’d expected to get a bus to the airport as we read the taxis overcharged for that route, but a taxi driver called us over and offered us the same price as the public bus! We couldn’t believe it and I found myself asking him 75 Dirhams of 75 Euros?! Now it’s time for us to fly to a new destination! First stop Seville, Spain, before we head to Portugal for 6 weeks volunteering in the Algarve.