We spent 2016 having an incredible time exploring China, the Philippines, Japan and Hawaii -which aren’t exactly our normal backpacker budget locations but we felt that after 8 years of travel we should open our wallets a little and not be such tight arses. So we splashed out and I’m so happy we did as its been one hell of a year. We then managed to cut our budget down by buying a van and living in it as we drove from Alaska to Florida rent free, no bills, just camping, nature and hiking. After 6 months we had to leave the US and sold our little camper named Daphne, then we twiddled our thumbs…where to next?

We’d spent a lot of our savings but didn’t want to go home and work yet…so we began searching the internet for volunteering positions. We were browsing for places in The Caribbean, Europe and North Africa and after having my mind set on husky sledding in Lapland or raking a beach in the Caribbean we ended up picking a place in Greece! Quite the contrast I know, but to be fair we were happy to volunteer anywhere, to experience new cultures, work a bit, get free accommodation and food and therefore keep our budget down. We then felt like travel agents as we spent an afternoon parked in Walmart using their free wifi and booking all our flights: Mexico first for a little holiday, then Cancun to London, the cheapest of which took us a convoluted route via Toronto with long waits at the airport and lots of jet lag, a brief but lovely visit back home and then a flight to Athens, sleeping half the night on a bench before our next flight to Skiathos island and finally a ferry to our final destination, Skopelos. Bloody hell! 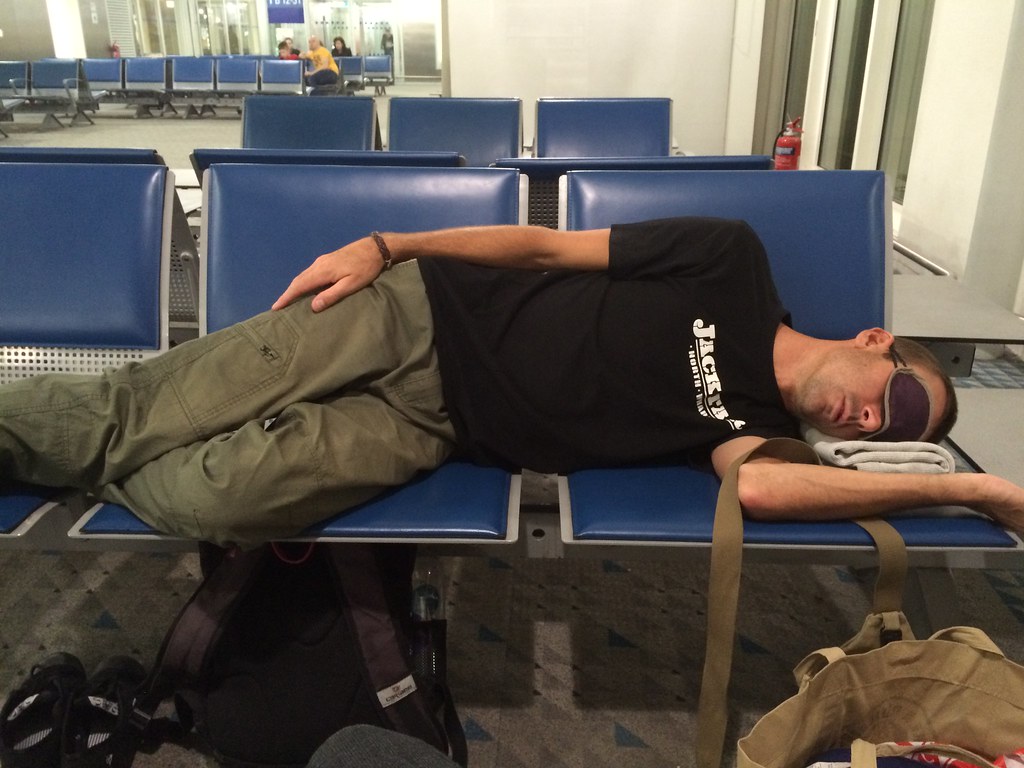 Skopelos island is said to be the greenest in Greece and our volunteering position entailed house sitting, feeding a cat and tending to the overgrown garden. It sounded delightful and best of all we’d get our own cute cottage and money for food which are both rare finds with volunteering. We laugh sometimes when we’re browsing the site and Craig will take the piss and say “this one sounds great Lauren…accommodation is a tent…and it’s bring your own tent!” so we were very happy with the place we found and will spend two months over the Christmas period there. The plane we got from Athens to Skiathos island was one of the smallest we’ve ever been on, minus a skydiving plane. I was so tired that I just wrapped my scarf round my face and tried to sleep while being totally unnerved by the safety of the light aircraft. The plane would make lots of noise and then go silent as if the engine had failed, but I was still too tired to open my eyes and check that there wasn’t an inferno on the wing beside us. We landed safely and walked across the runway to a room with two little conveyor belts. There were photos on the walls of planes flying at house level and almost skimming the beaches and I said to Craig how awesome it looked and that it was a shame we didn’t get to see that – turns out we did and Craig just didn’t wake me up on the plane which pissed me off. Then I pointed out a beautiful photo of a Greek island where the mountainous interior had snow atop it – “wow I wonder where that is Craig, snow in Greece!!” “Oh, yeah I saw that from the window while you were sleeping” for fucks sake Craig!! My bag was the last out and as soon as it went past the flaps they turned the belt off and I had to walk around to collect it and pop the bag on my back as there wasn’t even trolleys. There were signs for declaring items but not a soul around to even check. Then we stepped outside and just laughed, it really was a ghost town, we were last out and everyone had vanished. There were no taxis waiting to whisk us to Skiathos town or any public buses so we wandered inside and managed to find a lady in an office who called up a taxi for us. It wasn’t a long drive so only cost €5 to Skiathos Port. Winter is major offseason in Greece so the area was extremely quiet and it was actually very cold!! We packed some warm clothes but felt a bit unprepared for quite how cold it was. 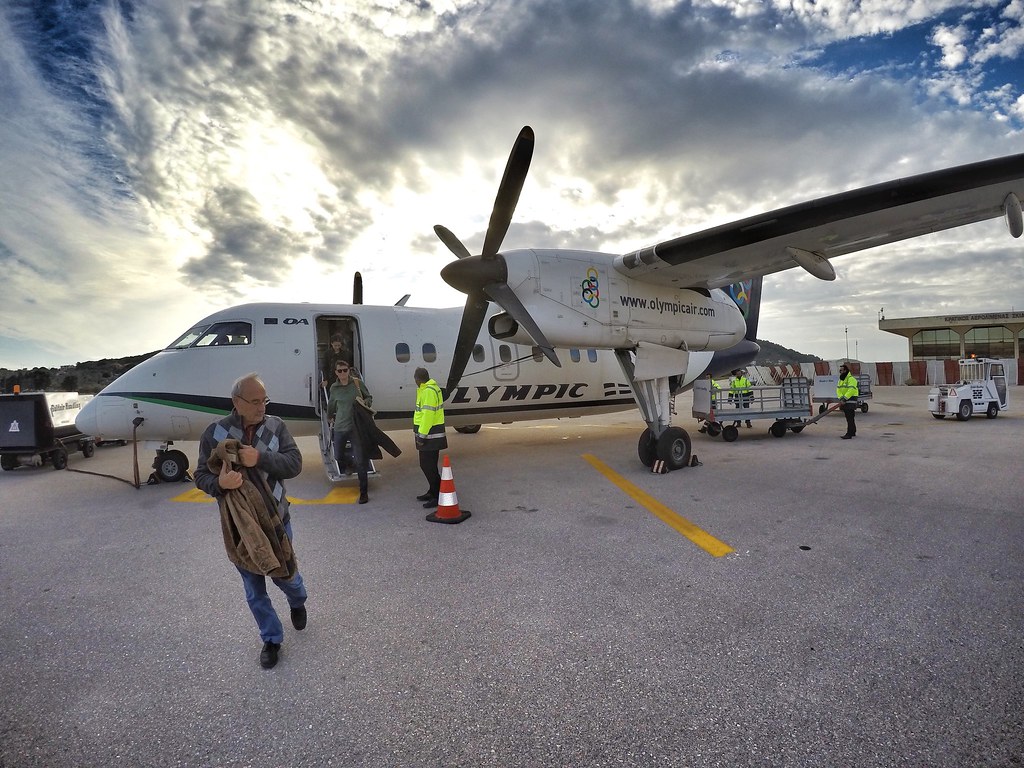 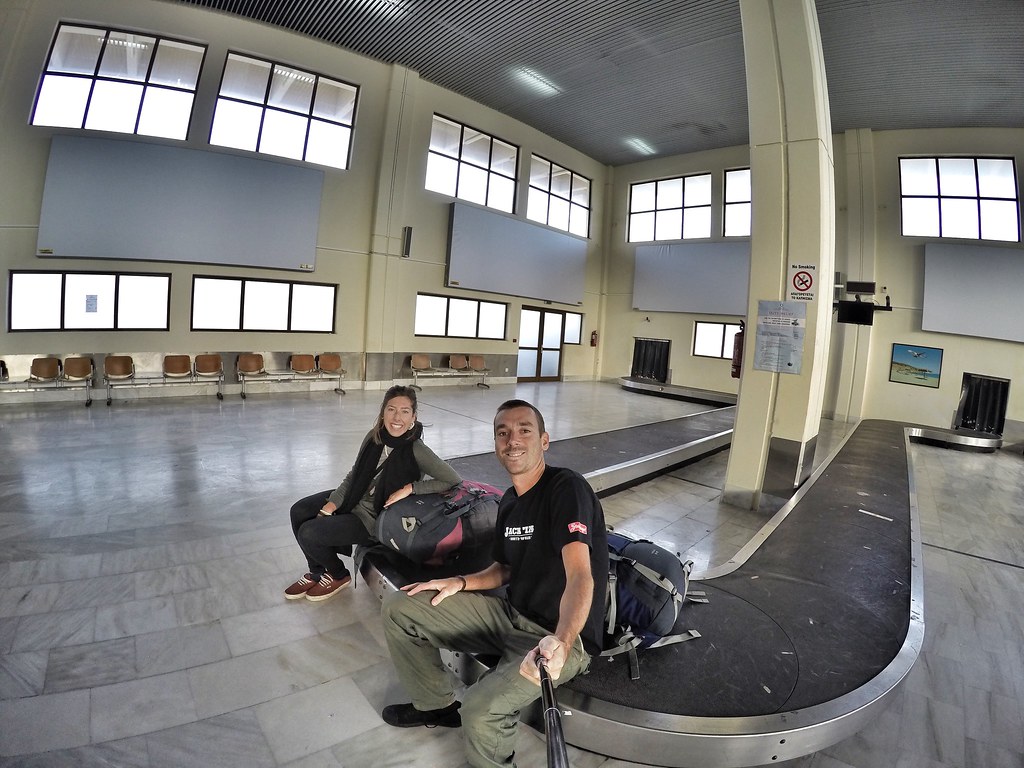 We ate some cupcakes on a bench and then went to a cafe to order a well needed coffee. Seeing as we were in Greece we asked for a Greek coffee. We had one when we drove through Greece in 2014 and I remember liking it back then. Clearly we needed fresh instructions on how to drink it as we failed miserably. It’s basically like an espresso sized coffee, and they use a super fine powder and no filter, so in theory you have a cup of grainy coffee sludge. Like the shit at the bottom of a percolator, the stuff you’d throw away. After two sips I really hit the coffee soil and did the rookiest of mistakes….I swirled the coffee. Never swirl a Greek coffee! If any coffee sludge had remotely settled, I’d now disturbed the crap out of it and after a couple of unpleasant sips I gave up and left the dregs. We later found out that you’re supposed to just leave it awhile to settle, and only ever drink half way down. So it’s actually a very expensive drink when you only get half an espresso cups worth. 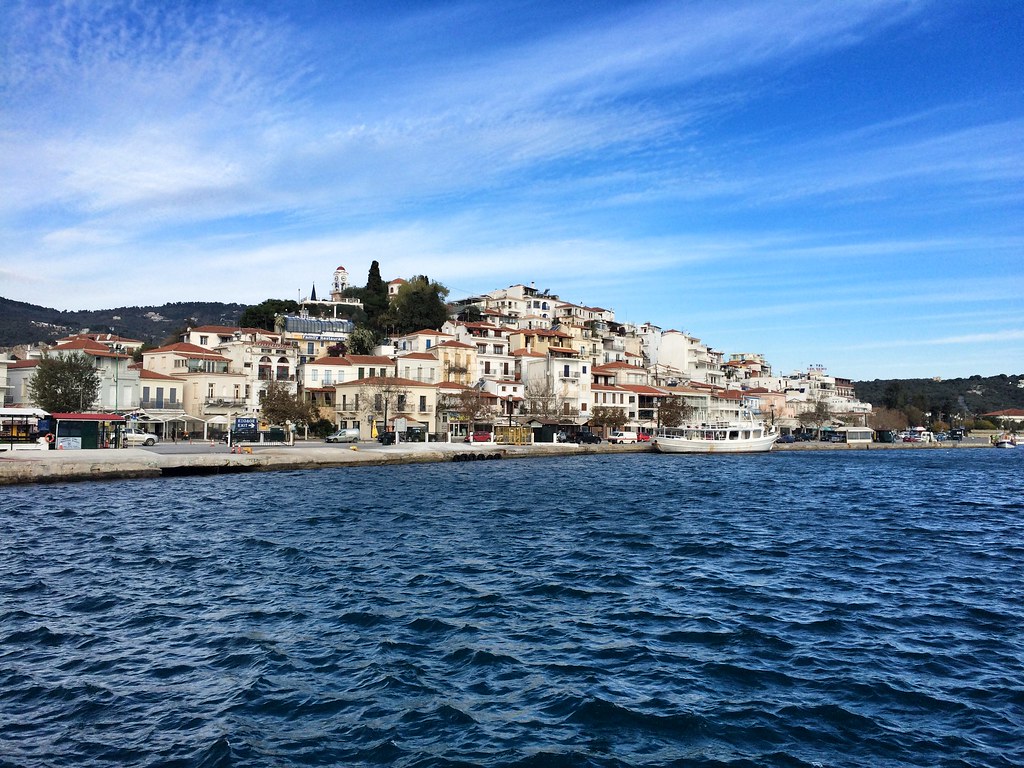 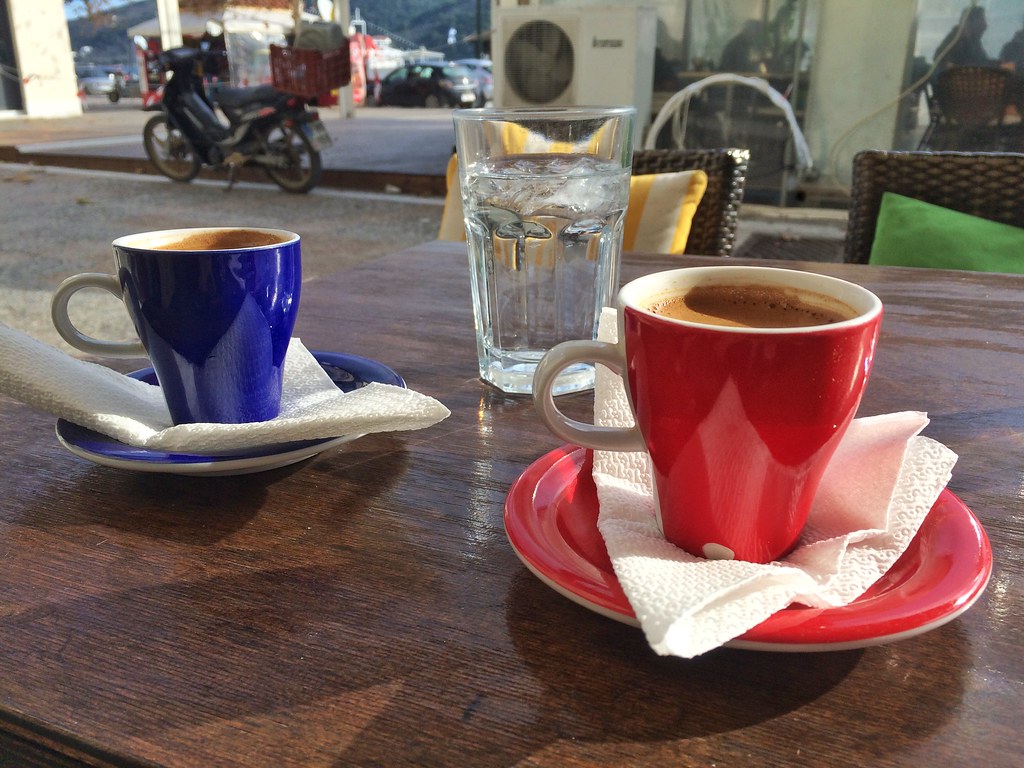 We left our backpacks at the ferry office and walked around the quiet cobbled lanes of Skiathos. Most buildings were shut up for the season but a few remained open and we found a sweet little fast food joint to get a Gyro each. I bloody love Gyros, they use this warm, doughy, pita-style bread, slather it in tzatziki and fill it with chips, tomatoes and kebab style meat. Minus the kebab meat for mine, but still delicious and served by such a jolly chap. An adorable dog came up to the window and just looked up at us with his giant puppy dog eyes. Craig went outside to give him a stroke and the owner casually said “yeah that’s my dog, he walks round the island all day, everyone knows him, and he just comes here when he wants food”. You don’t see too many stray dogs round Greece like you do stray cats though. It’s like instead of having a ‘crazy cat lady’ they have ‘crazy cat villages’ and the community lets the population grow wild. After having a nap on a freezing cold step outside the ferry office the boat finally arrived and we hoped onboard. We had a superb view across Skopelos town from the ferry and I tried to envision the view was from the small plane we were on earlier but it didn’t work. It was a big car ferry but only had about a dozen passengers on board. I walked up onto the windy top deck where a Greek flag was swaying wildly. There were lots of little islands around and we trudged towards Skopelos Island. It looked wild and green except for a little cluster of white buildings on a hillside – which was the village we were heading for but the damn ferry wasn’t going to that particular port so 45 minutes later we arrived at Skopelos town where white washed homes piled up the hillside. 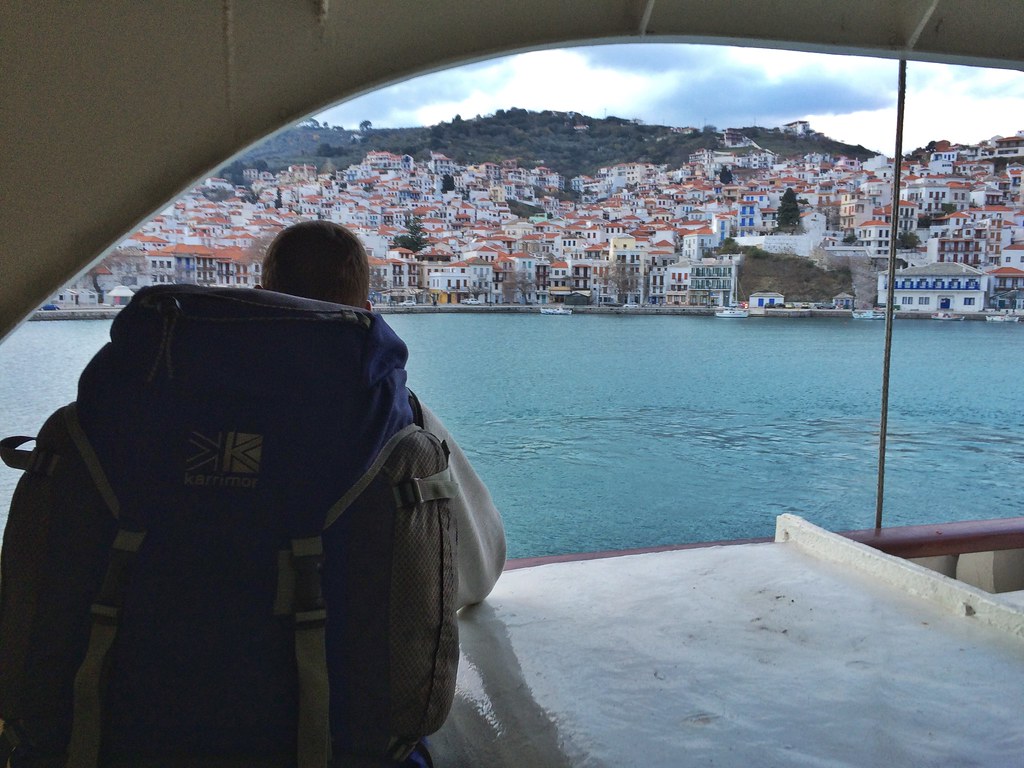 Our hosts friends, who happened to also be British, picked us up from the port and we set off for the final slog of our 24 hour journey. The sun was setting as we drove across the heavily forested island, along wiggly roads like a meandering river. We were up high at times looking down on the stunning coastline and then the road would wind down to sea level and go alongside calm bays. We arrived to a big storm cloud looming above us and did a tag team as we met our host and he led us through the quaint village where we will be living for the next 2 months. To be continued…