We set off on an early morning jeepney to Bontoc. One thing we’ve been seeing in this area is locals sat on the roof of the jeepneys or top-loading as its called here. So I asked the driver if we could go on the top and he was more than happy for us to. It had a metal rack on the roof and the bars were covered in chilled condensation. 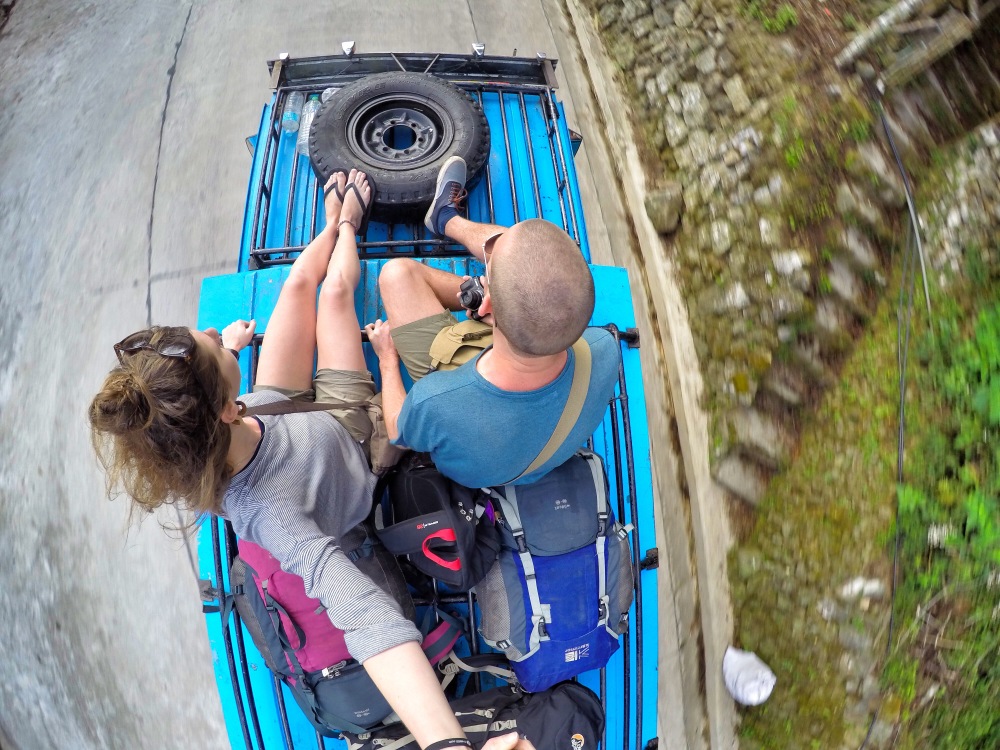 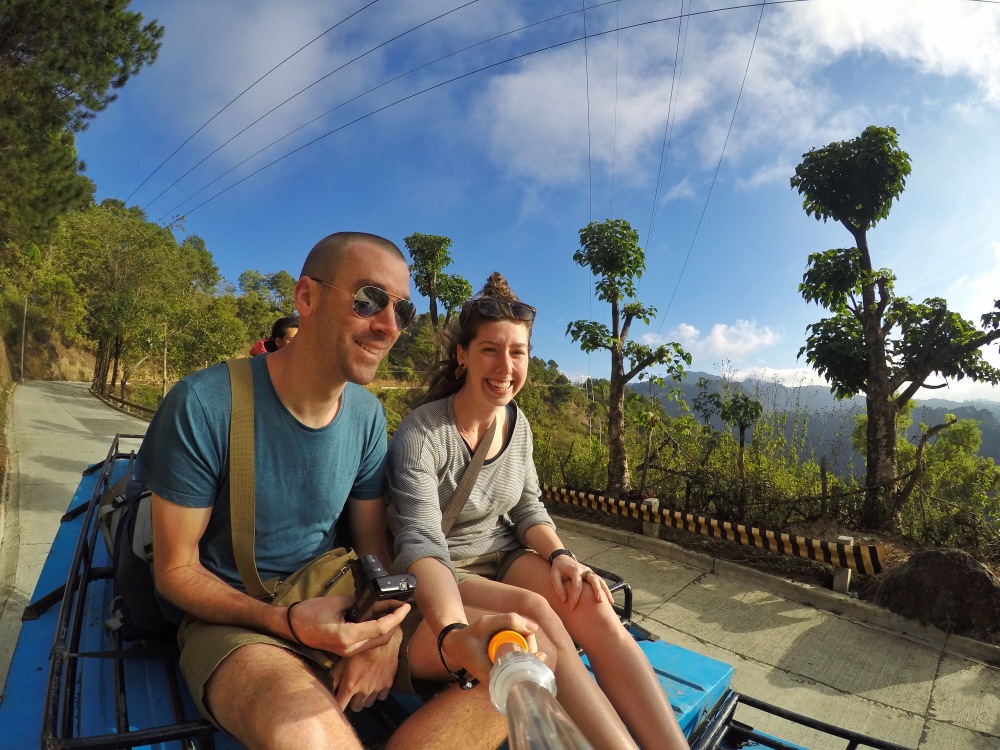 Top-loading is not comfortable at all, it kills your butt and it’s freeeeezing cold in the blustery winds. But all that aside, it’s bloody awesome fun! The views were amazing from the top and it was a great way to travel without feeling travel sick. As we rounded a bend we were greeted with a superb view, we were above the clouds and it was amazing! We also went through a couple of narrow sections of the road where the rock wall curved above the road like half a tunnel.Towards Bontoc we passed some beautiful green rice terraces by the river.

It was a smooth transition from one jeepney to the next heading to Banaue and inside were a bunch of tired looking westerners. We were all kept awake by the bumpy road and loud country music being played, I felt like we’d stepped into the Wild West.

At a petrol stop the driver asked if anyone wanted to top-load and we said we were fine as we’d done it this morning. One tourist asked if it was safe and he said there’s a saying in the Philippines, if you fall up, you will be ok, and if you fall down, I will stop and pick you up. Well I’m glad we cleared that one up!! He also said the views were great so we said fuck it and headed up with a Russian girl. He didn’t lie, the views were incredible; stunning rice terraces alongside the road and up and down the mountains. 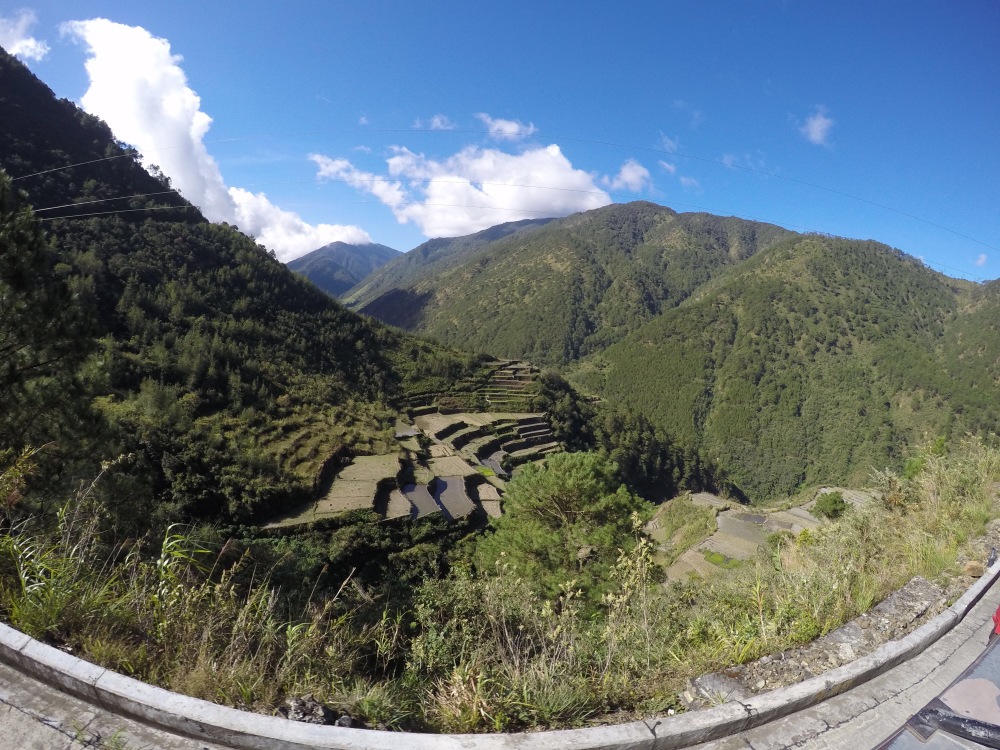 We were lucky to find a hotel two minutes from the drop off point. The walls were basically made of cardboard but it was only £7 a night and had a great balcony with cheap food so it was a good spot to meet other travellers.
After some lunch we headed out to see Banaue’s rice terraces. We walked for nearly two hours up the main road in the stinking heat. Along the way were various viewpoints and local tribes people dressed in traditional clothes and asking for us to take a photo. It was a bit sad to see as the really old ones didn’t even look capable of dressing themselves and were sat in humiliating outfits, they weren’t even realistic as they wore a mix of western accessories too. There was one very cool guy though who really looked like he’d just hiked down from his village in the mountains. He had a big feather headpiece in the centre of which was a monkeys skull. A large handmade necklace hung from his neck and he was delighted to show it off to us, explaining that it was made of animal teeth and jaws. He definitely mentioned wild pig and when I pointed to a black chicken foot curled up amongst the jaws he said it was the foot of the national bird. 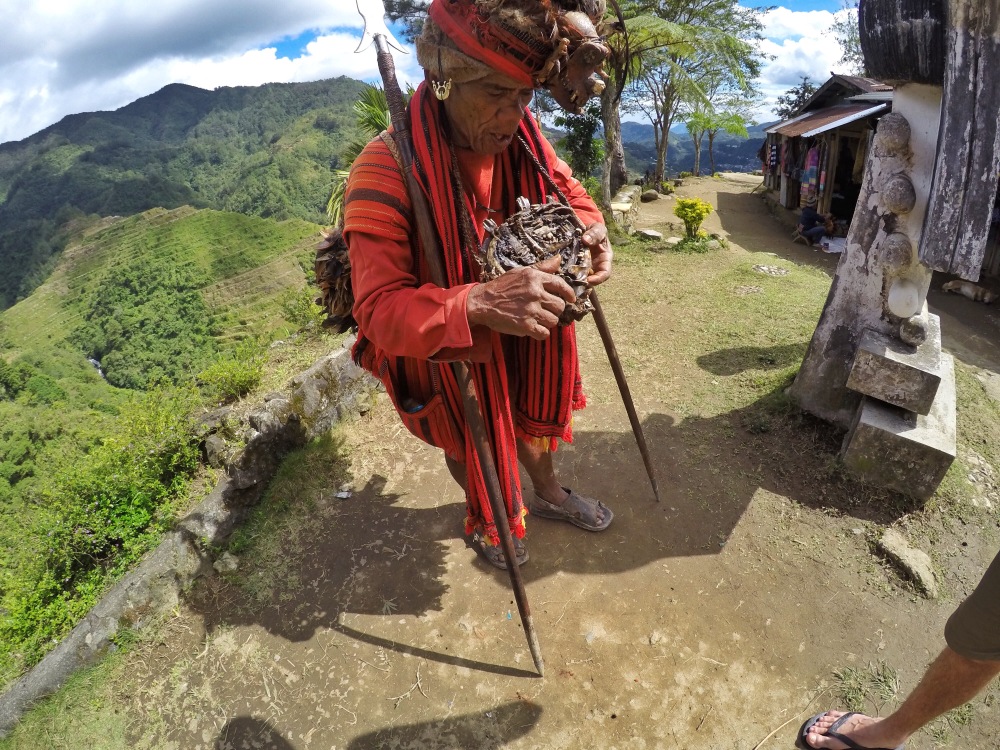 Eventually we found the track leading down into the terraces which would take us back to Banaue. There were no signs and paths kept splitting everywhere. We ended up in a rustic village with pigs lazing in the mud and chickens free ranging the grounds. The locals said hello and I asked them if it was the right way to Banaue, a chap with great English who used to live here but now works in Manila told us to go left and right, that was it. We had a little chat with him about his village, and asked if the locals eat rat as our friend had said that its a delicacy to eat the rats that live amongst the terraces. This guy was shocked that I’d even suggested it, as if it sounded disgusting, and then said “no not rat but we eat other things like dogs, snakes and stuff”. 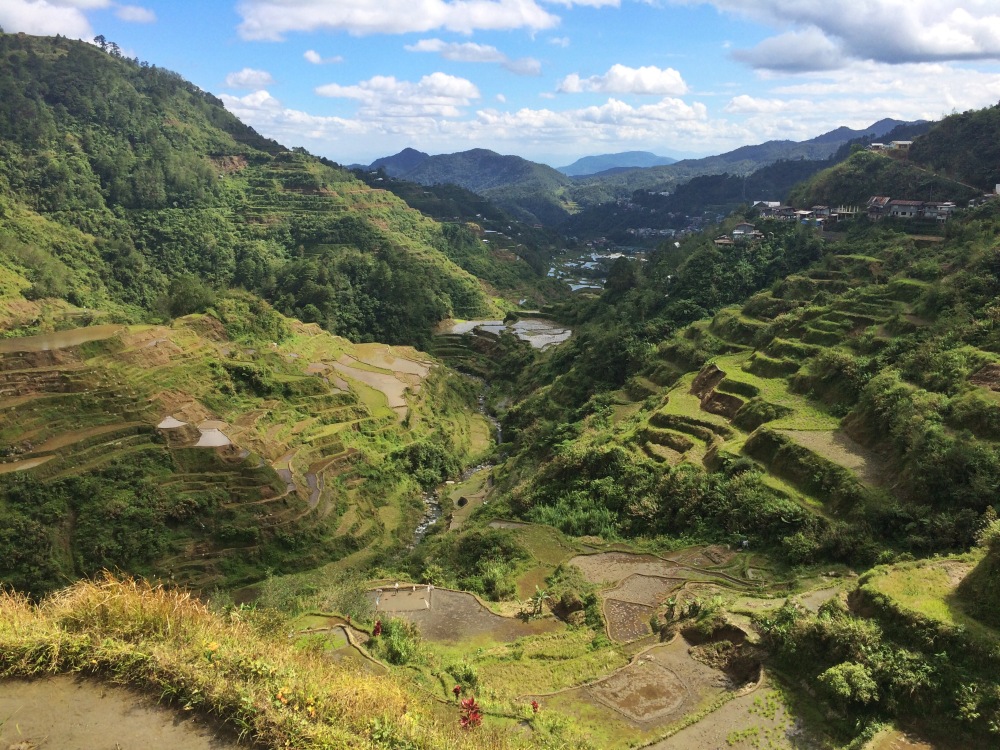 We followed his directions and ended up walking along at the irrigation wall. The path was the wall itself, and was a mere 3 inches wide at times. It was crazy. You probable wouldn’t break anything if you fell but you’d sink into a whole load of squelchy mud a few meters below. 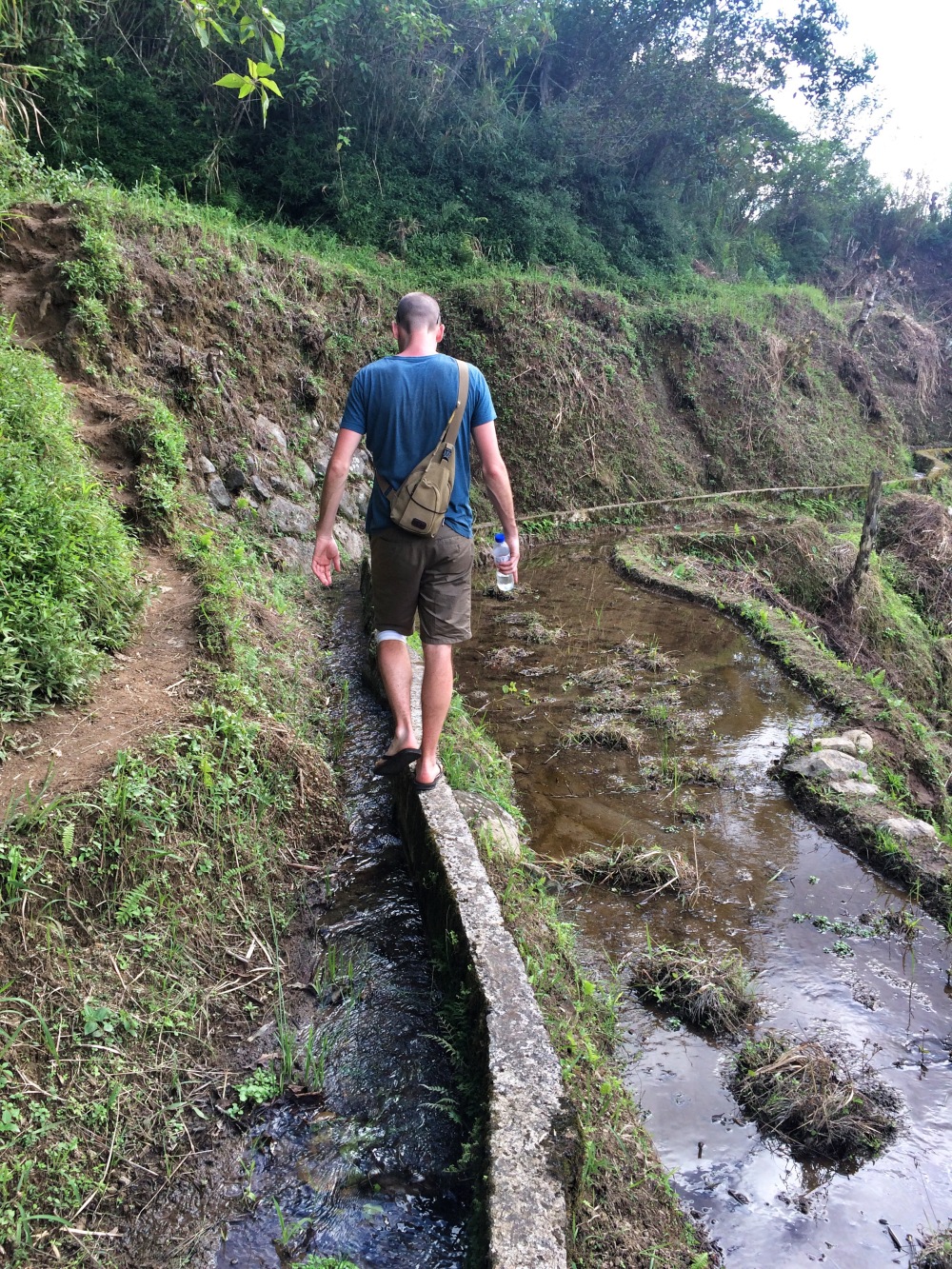 We were high up above all the terraces, some were filled with water, others were freshly planted and there were nursery’s dotted around with neat bright green squares. Eventually we saw Banaue across the valley and passed a few more traditional Ifuago villages with beautiful wooden houses on stilts with huge roofs. Along the inner area of the roof were either animal skulls or animal jaws, I asked a local guy why they did this and he said it was for good health. He was pretty old so we said it must be working and he had a good old giggle.