After our first two dull stops it was time for the adventures to begin. We were heading inland to the cordillera mountains. It took 1 bus, 3 vans, 1 jeepney, 1 near crash, 1 break down and 1 prompt replacement van to reach Sagada. We passed rice terraces and beautiful mountain vistas along the way and I had a baby’s foot digging in my thigh for over an hour while the little shit slept peacefully. 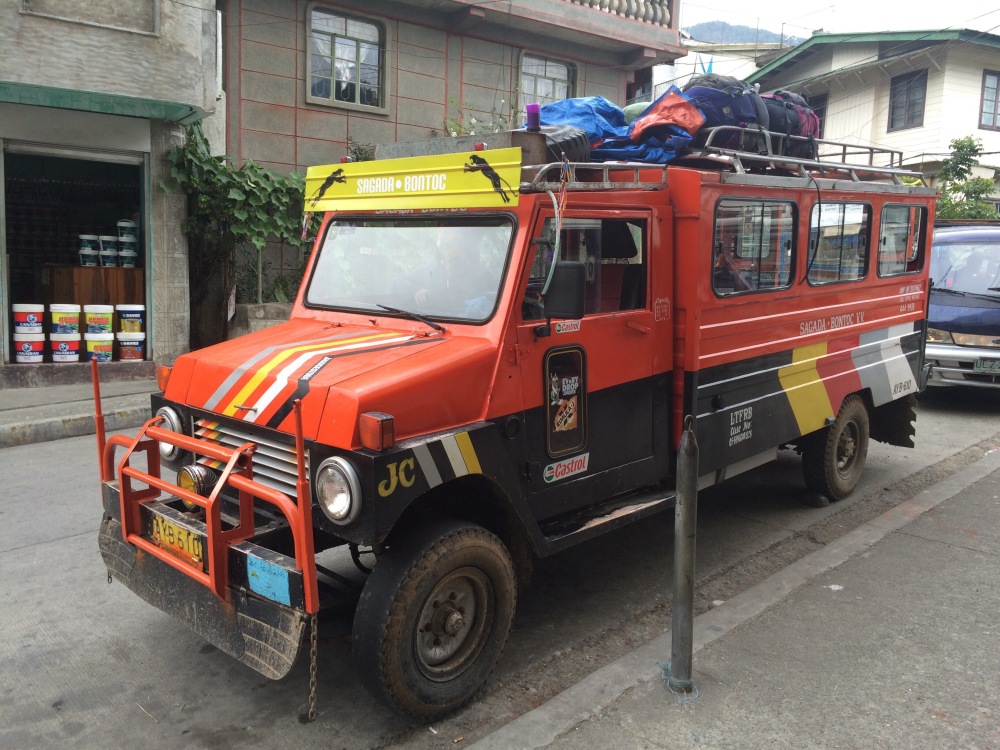 It was dusk when we arrived in Sagada, said to be the closest thing the Philippines has to a backpacker hangout…it was far from it. One road led down hill with hotels and restaurants, we popped into a couple hotels and both were full. Some teenagers working there said they had space in their extension 5 minutes walk away. It was like following dumb and dumber, they had no idea what they were doing. They got out a dozen keys and called their mum I guess asking which rooms and started giggling like mad. Then they offered us a skanky 6 bed room at an extortionate fee. There was a long trail of ants leading to the bathroom and a cockroach scurried past us. Eugh. So we headed off in the dark now and luckily found a place to call home for the next few nights.

The next day we woke to clear blues and set off to explore the area. There’s a right monopoly in Sagada about having to take a guide everywhere, even for 20 min walks which have obvious trails. We hate going with guides or on tours so we just took a stroll to see how we got on. Ok so we probably walked a lot further than we would have with a guide and met some scary dogs but we wondered around some pretty countryside and had the views to ourselves.

We grabbed a doughy cinnamon roll from a shop and followed a sneaky route i’d read about online to visit the areas top sight; the hanging coffins. We went into a cave and along a section of underground river before spotting our first coffins high aup and sort of pushed into a gap in the cliff wall.

Further along were the main ones where a dozen or so were resting on metal poles up a sheer cliff. It wasn’t quite as dramatic as I’d expected but it was still pretty unique. There were a few chairs dangling from the coffins which apparently would of carried the deceased up. I did some reading online about it all and the reason they’re put on the cliffs is to put them closer to heaven. Also sometimes the family members carry the deceased to the burial site in the hope that their bodily fluids will leak onto them and it will pass on the dead persons talent and luck Eww.

As much as I hated the hilly road of Sagada I did love the sights we’d see along the way. Pick up trucks full of piglets or huge black pigs, dogs everywhere, there was one really gorgeous golden retriever which we loved bumping into and the two dogs that hung out around our hotel always got excited to see us. One day a tourist was confidently walking along the road with a beer in one hand and a chicken in the other. What he didn’t realise was that the chicken was constantly throwing up over his trainers…chicken karma.