The famous star ferry took us across the calm waters to the main Hong Kong island. We were now in the much swankier area and a pedestrianised causeway led us over the city without having to cross a single road. We then got slowly carried up the worlds longest travelator. It had pavement sections scattered throughout so you could hop on or off to the surrounding hip cafes and restaurants. Because of this Craig angrily declared it couldn’t be the worlds longest if it wasn’t continuous.

A short bus trip took us to the southern section of the island to Aberdeen, a fishing town where boats bobbed in the water and high rises rose around us. Hunger eventually hit and with no McDonalds in sight we had to find an alternative affordable lunch, which came in the shape of a boat. We spotted a local by the sea holding a polystyrene bowl filled with noodle soup. Then we saw where she’d got it from; a boat was tied up and bobbing around in the sea and on board the rustic boat was an even more rustic kitchen. An old man balanced himself against the swell while quickly serving soup. He was about to set off but we quickly shouted our order of two of what she had and he got cookin’. I suddenly realised we were by the sea and quickly shouted ‘no fish!!’ I wouldn’t be able to eat a thing if it tasted fishy but it didn’t seem like he understood. I tried an even weaker ‘no meat either…’ But it was a lost cause and I was handed a bowl laced with meat. Craigs had a really weird thing in his that looked like a soaked sponge with eyelashes stuck in it. It looked rank!

As we searched for our next bus out of town to Stanley we spotted a graveyard built in true Hong Kong resourceful style, tiered up a hillside.

A double decker bus led us away from the high rises and along a beautiful windy coast road past forested hills. The driver was an absolute maniac!! We’d noticed the bus drivers going extremely fast through the city and just figured it felt even faster on the bus itself. We were hitting bushes and branches and had numerous near misses with other vehicles. He’d slam the brakes on at the last moment and everyone would launch forward. A couple of English expats in front of us said they do this journey loads and have never had such a crazy bus driver!!

Stanley was an expats paradise; a clean promenade, modern mall and cute bars and pubs lining the waterfront. It even had a pizza express…Oh how we’d of loved to of eaten there, but we couldn’t justify spending that much money, it was more expensive than England!

The next day we were treated to another blue sky day so we decided to head up the Peak Tram. We had to wait over an hour in the queue to be chugged up the steep hill, the highest point in Hong Kong in fact. It went so steeply up that my neck began to ache holding my head up-right. Craig said his neck didn’t hurt at all so I laughed and said it was because my brain was bigger and heavier!

To see the 360 degree view you had to pay extra so we just did a short walk instead and got some incredible views of the concrete jungle below us.

That night we went to kowloons waterfront to see supposedly one of the best lights to music show. Before the show began the skyline looked pretty damn awesome, the buildings were lit up brightly and quite a few seemed to have extra decorations for new year.

The show was actually quite disappointing. I think if the buildings weren’t originally lit up then it would of been a nice surprise but the only difference of the show to the normal skyline were a few of the lights flashed to music and then some green laser beams pierced the sky from the rooftops. 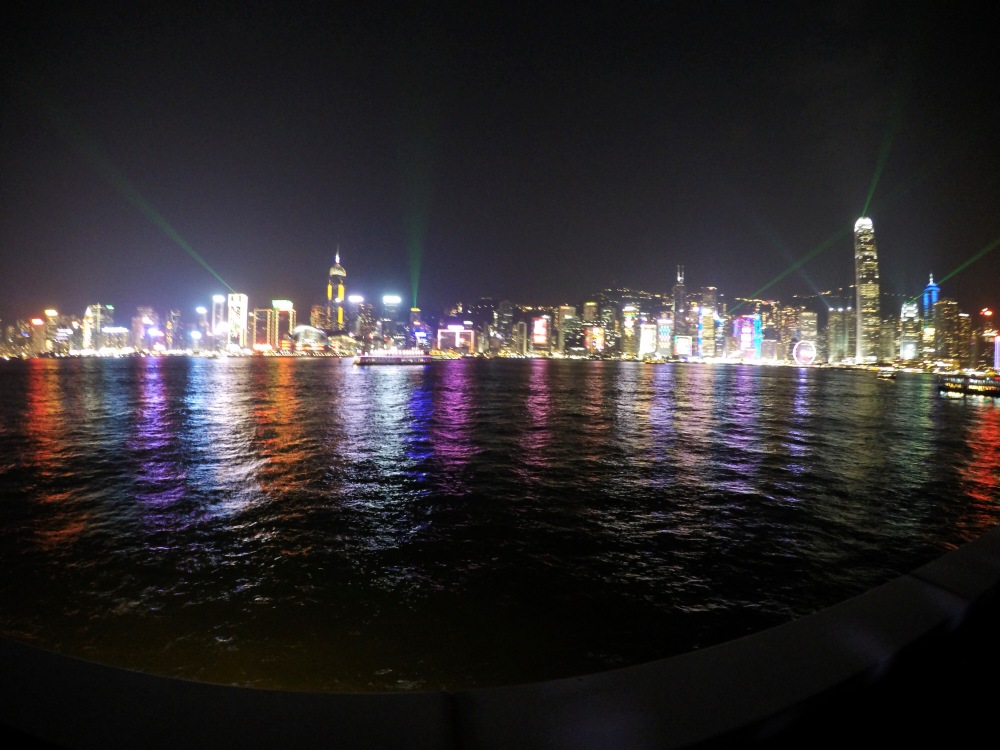 So that’s it, our time in Hong Kong is up. It was a nice taster. Far too expensive for backpackers but certainly a nice place to explore on holiday, judging by a brochure I saw they have some great hikes and stunning beaches.