We were a bit reluctant about visiting Fenghuang due to its extortionate entrance fee of £15, but we’d regret not going so we went along. Vigilant guards (locals in red jackets) checked tickets at every entrance to the Old Town so there was no way around it. We popped into a couple hotels until we found a cheap but nice one. In fact it looked way over our budget but I figured it was off season so we may as well ask.

Turns out it was a themed hotel, so the first room he showed us was nautical style, the bed was built into the front of a boat!!! It was pretty damn cool, and the guy got out his phone and spoke Chinese into it, then English came out the other end, it said ‘You like?’ the owner raised his eyebrows up and down and we just cracked up. The next room was a lovely big theme-less one, but with a balcony and hanging egg chair overlooking the old town and river. It was nice but we weren’t sitting on that balcony in this weather and the big window would make the room so cold. So in his translator we asked for his cheapest room and he took us into a time warp back to the 60’s. Floral wallpaper, psychedelic bed covers and blue and red spot lights. It was pretty ghastly but only £12 so we went for it.

We went downstairs to sign in and noticed a generous bowl of condoms for guests on the counter…hmm. When we went back up to our room we saw a computer unit was under the table and a webcam on the counter aiming right at our beds. I felt like we’d checked into a film yourself brothel so flipped the camera towards the wall and pretended it wasn’t there.

I forgot to say on the train here they were selling electric hair trimmers, and to our disgust locals were casually shaving their beards or bald heads on the train. They’d walk through the carriage just rubbing it all over their head and face and everyone would be showered in fine hair confetti.

Anyway, back to Fenghuang, the old town was a maze of alleys with shops selling the same old shit; scarfs, trinkets, dried meat, the local speciality of peanut brittle which was constantly being made on the streets using a big wooden hammer and ginger sweets where the candy was stretched around metal poles on the outside of the shops – it was delicious, totally took your breath away with the burning ginger but so good. The buildings were rustic and wooden with traditional stilts holding up the overhanging section along the river banks.

The eateries were rather different to the others we’d seen in China. They all had fish tanks lining the building and cages outside with chickens, pheasants, ducks and even geese. A dirty wooden chopping board and meat cleaver lay in front of all the animals so they had no choice but to watch the gruesome show. One restaurant we walked past had a fish on the floor that had clearly jumped out the tank and was flapping frantically. I said ‘Nihow’ to a few people inside and eventually someone put it back in the tank – not sure if we saved it or not but I’d prefer it to be eaten than wasted. 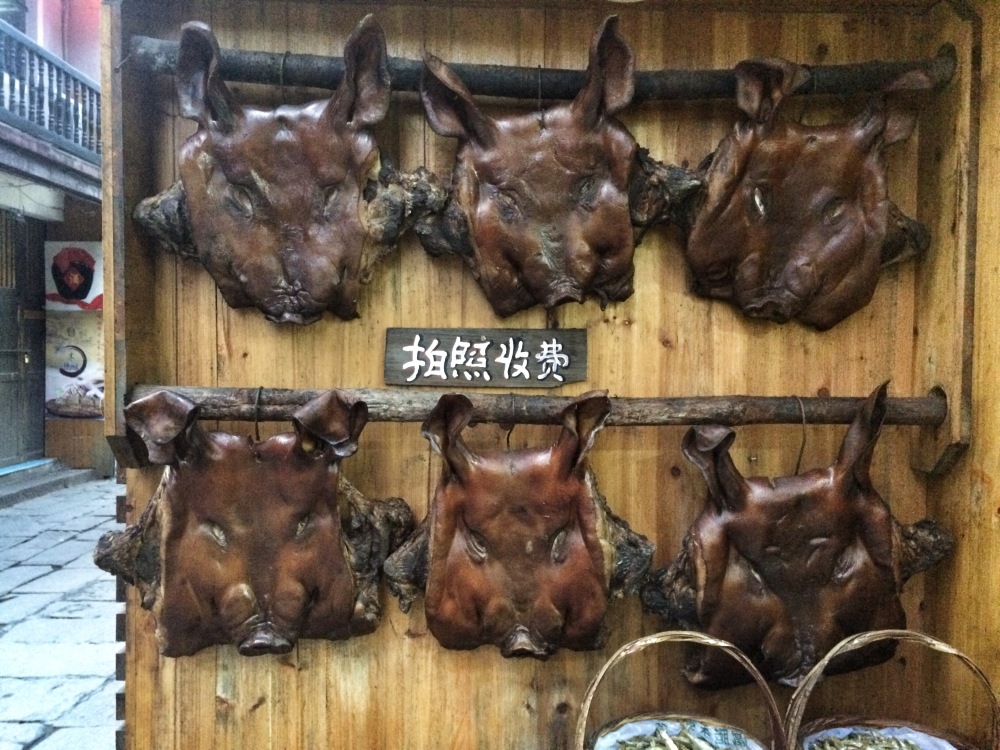 Muslim butchers made goat kebabs in the street while the other half of the carcass hung up on a rail, and it’s fur and hooves were folded nearly on the ground. The other two goats made a bloody good attempt at escaping a killing by charging through the crowd of people but they were grabbed by their horns and paraded through town like the village pedophiles.

Our entry ticket included 10 sights so Craig took it as a mission to see all attractions. It was like playing bingo every time we got a new hole punch on the ticket. This was quite the challenge when we didn’t have a map though. Each site bored me, they were old residences and ancestral halls, I much preferred just getting lost around the town and people watching. Included in our entry ticket was a bamboo raft down the river which gave us a different vantage point of all the stilted houses.

The locals round here carry their babies in whicker baskets on their backs all wrapped up in cozy blankets. Women selling jewellery and tat on the streets dress in Miao clothing with huge hats, I’m sure it’s just for tourism but it makes a nice shot. In fact a lot of touts offer for you to dress in Miao clothing for a photo by the river and we saw quite a few local tourists doing this.

We realised the other day that we haven’t eaten in a heated environment since arriving in China. We’re either at outside street stalls or cheap eateries that keep their doors wide open. But the past two towns have had this genius idea, they put a sort of blanket table cloth on the table with a glass sheet on top to protect it from spillages. Under the table is a concrete sort of tube with smouldering coals. You sit down, wrap the blanket over your legs and embrace the warmth!

We wanted to head off the next day but the direct bus to Guilin was full so we had to hang around and woke up to snow the next day! The whole town was coated in white and it looked beautiful. Bloody cold, but still very pretty.

We found another attraction to get hole punched on our ticket where went up a few hundred steps with a couple of viewpoints. The locals were loving the snow, it caked a swing bridge and kids were running around with snowballs and we passed a couple of miniature snowmen. 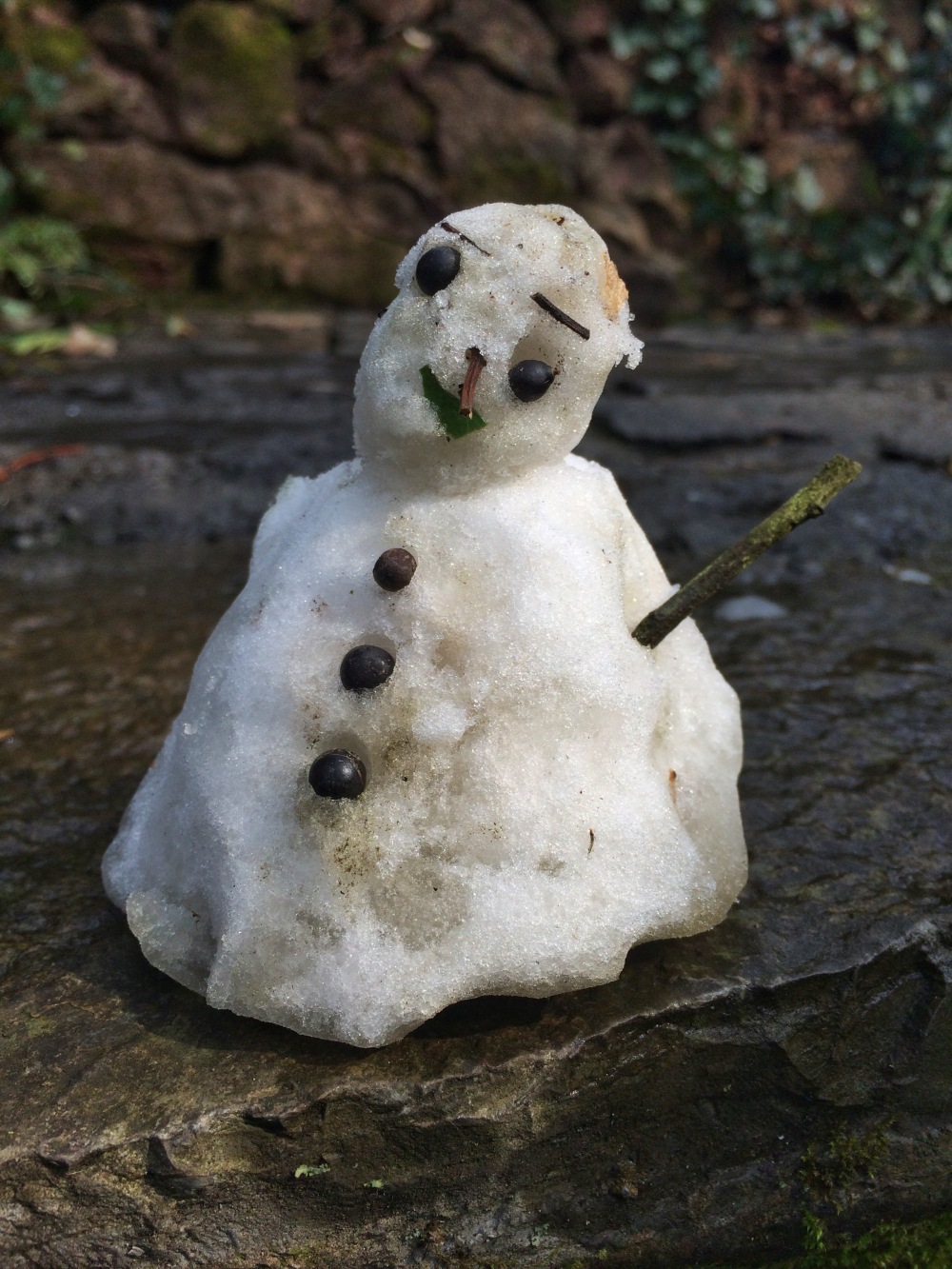 The next section of the walk had lots of bright red umbrellas hanging from the trees. They looked awesome against the bleak snowy background. When we got to a guarded gate we were pointed back which was odd as we’d only seen people walking up the steps, not back down. Then the guard let through a Chinese couple so I went back up and tried to ask if we could go up and he shooed us away and closed the gate, only to open it again for a Chinese family. I walked off and angrily named it the racism gate. We never found out what was on the other side. 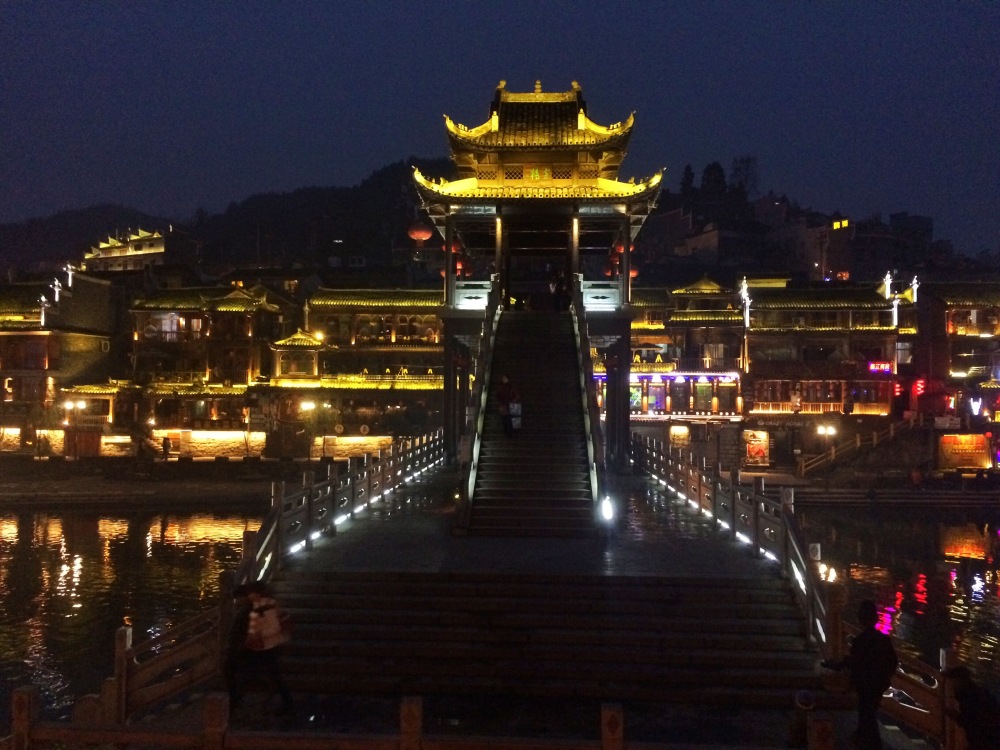