Five kilometres from the Swiss border Pablo started making a horrible squeaky noise and we figured it was the brakes. We couldn’t believe our luck; Switzerland is renowned for being stupidly expensive so a trip to the mechanic sounded really exciting for our budget!

We were so annoyed as it was amazing weather at last. We’d got a detailed weather report saying it would be nice for two days and then we’re expecting snow or rain depending on our altitude. So we had decided to just drive west, see as much as possible and try to beat the snow over the highest passes. But, that would be foolish to attempt with a brake problem so we enquired in a village mechanics. He worked out that the brakes were fine, but a spring on one side of the brake was playing up and sticking. He had a fiddle with it and took Pablo for a test drive confirming that the problem was fixed. Hooray! Luckily it only took about 45 minutes of our precious sunshine and €40 from our dwindling wallet.

Holy moly Switzerland really is beautiful. We drove through more incredibly green valleys but now we were surrounded by snowy mountains. They were huge mountains and totally caked in snow. The road took us up and over the 2149m Ofen Pass which offered more amazing views. As we got down to Zernes Craig said ‘what’s that noise?!’ Neither of us wanted to believe we heard it but the squeaking brakes were back and a total waste of money. At least we know the problem now and it’s just a tiny part we need to replace.

Within a few hours of being in the country we were finding the locals very friendly. Two security men in fluorescent orange jumpsuits were stopping traffic for roadworks. One was wearing a cowboy hat, and the other a sailor style cap. They looked hilarious, like The Village People. We were let through and decided to wave at the man working at the other end all on his own. We like to wave at lolly pop men, it’s a dull and cold job. This chap gave us the most flamboyant wave back with a huge grin on his face. We were in hysterics, I still can’t get that image out of my head.

The highlight of the day though was the Fruelapass, at 2380m it’s our highest on this trip. It closes in winter so we were lucky to still be able to drive it. They have a train through a tunnel nearby that takes cars across in winter, I dread to think how much that would cost. We drove past a lot of snow, 1-2 foot had been ploughed onto the edges of the road. We rushed up to catch the sunset and although a lot of the mountains were shady, it was the price we had to pay to see the other side of them, which glowed in the setting sun. The snow capped peaks were a beautiful pink colour and led off into the distance. It was freezing at the top, one lake had half frozen while another had totally frozen and been covered in snow so you wouldn’t even know it was there.

We managed to brave a shower in the bitterly cold temperature as we had filled up the shower with a hot tap (thank you Switzerland!) and didn’t want to waste it. It was freezing, the wind instantly froze my wet hair, but as always it felt good to be clean and we quickly got into our flattering long johns.

We didn’t look for a place to stay till dark which always makes it difficult, but we found a spot along a busy road near Davos which was better than nothing. We’d seen quite a few no camping signs so were unsure how strict this country was. While Craig prepped dinner we saw a light shine through the front and then a massive smack on the back window. We opened the door to find a cop, who asked if we planned to sleep there. I explained that we were tired and asked if it was OK there. He said locals might see our foreign plates and think we were lost in the mountains, so he suggested we drove back to Davos. We were waiting for him to say ‘and go to the campground’ but much to our delight he said ‘and go to the small car park next to the lake’. He was so sweet and smiley, unlike the cops that woke us up at 3am in Croatia.

We drove to the lake and were surprised to see swanky houses scattered around the lake right by the parking area. We always try to stay out of sight from houses as we think it’s rude and I would hate to live in an idyllic spot and wake to see some hippies outside my house. But the friendly cop had sent us there and most of the houses looked unused like winter rentals. When we opened the door to drain our pasta we could smell smoke from a chimney nearby. I suggested we wiped the condensation off the windows and look up at the warmly lit houses with puppy dog eyes till a local takes pity on us and invites us in for hot chocolate. 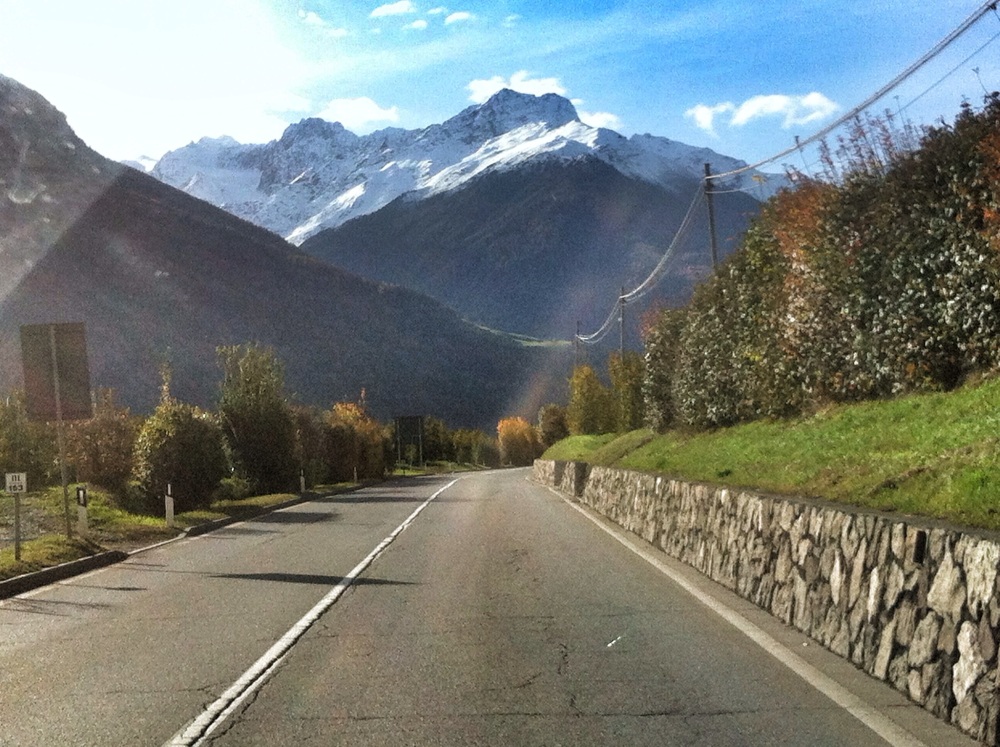 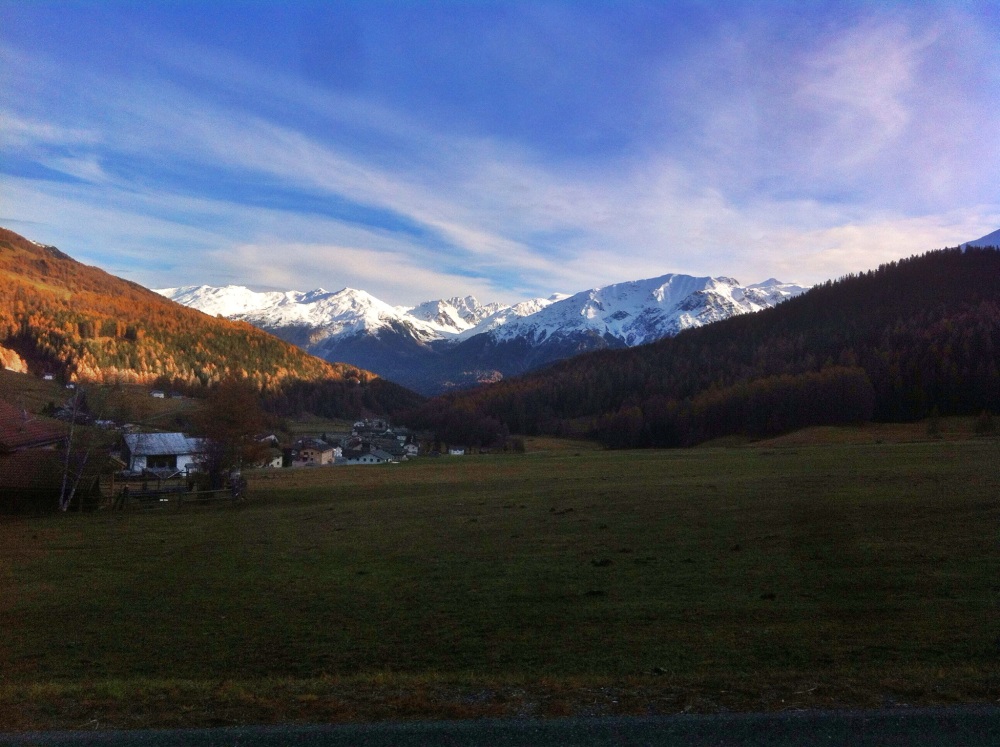 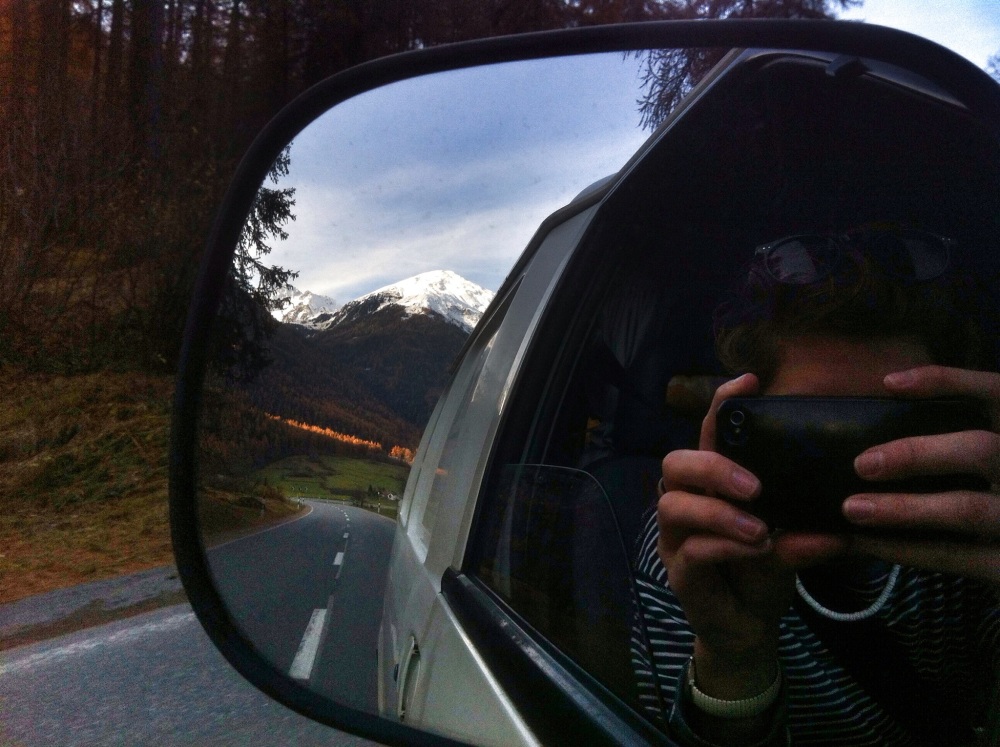