I’ve seen numerous photos of Croatia’s Plitvice lakes; their usually on websites displaying breathtaking places you didn’t know existed in the world. They instantly made it onto my list of places to visit, but I hadn’t heard much about Krka National Park, further South. I’d read it had some of Croatia’s most impressive scenery, but I’ve never spotted a photo before. So we drove there not sure what to expect, and we found paradise.

It cost a hefty €13 to enter the park, but to be fair to them it was very well set up. The Krka river meanders through the centre of the park, it’s a calm river from afar and could be mistaken for a lake. But there are sections where waterfalls drop into emerald pools, one after the other in picturesque layers.

The first area we visited was Skradinski Buk, where a 400m long section of the river has 17 waterfalls cascading down and gradually dropping nearly 50m elevation.

We followed a boardwalk over the clear water and passed numerous viewpoints across the tiered pools. Each one had an orange edge due to limestone deposits and over time its caused these shelfs where water trickles or gushes down. As soon as we got to the first lookout it instantly reminded us of Semuc Champey in Guatemala, in other words, it was amazing! It was such a beautiful area, and to walk around it and see the various pools and falls from different angles was great.

Annoyingly though, they didn’t have any English brochures left with info on the park. Instead they had signposts at specific spots which had an image and a barcode to scan with your smart phone. I’m new to this iPhone malarkey, I find the phone extremely handy as I can easily contact my family and write all my blogs on it etc, but I have no idea how this barcode thing works. It was really silly, like if you weren’t modern enough you were left without the facts about what turtles live in the park. It’s keeping the poor people uneducated.

Next stop was Roški Slap, which was much less popular. We had lunch in Pablo first and were joined by a lovely little dog. She had a collar on and was very healthy so clearly had an owner, which was a shame as she was the perfect size to keep. We fed her bread and played around with her before setting of on our hike. Much to our excitement she came along with us, so we quickly named our new rented pet Maple.

Roski Slap had numerous gentle cascades, but they could only be appreciated from up high. So we climbed over 500 steps!! It was bloody tiring but the view was perfect; the gentle lagoon-like area of the Krka was cut with a forested section and instantly began its dozens of ‘White Necklace’ cascades downhill.

There was also a cave at the top where two workers checked our tickets. They clearly knew ‘our’ dog and told us her name was actually Meggy, I preferred Maple though. The cave was inhabited about 6000 years ago and two children’s bodies were found buried inside. It sounded a bit unhygienic to us; it was only 50m deep, they’d be eating their breakfast round the corner from their buried kids.

When we left the cave and walked back down the steps, Meggy had vanished. She’d actually befriended another couple but as soon as she spotted us she galloped down the steps towards us and I felt like a proud parent.

The only problem with having a tag along dog is you look like your the owner. Which is great, till the dog shits, or like Meggy, chases cars! It was so embarrassing! We walked along a single lane bridge back to the village and she was darting in front of cars. Of course we didn’t want her to get run over, so we were trying to grab her while the cars waited patiently. When the cars left she’d run and bark at them getting within inches of their tyres. Those drivers must’ve thought we were the most incompetent dog owners. I wanted to tell them she wasn’t our dog but all the cars had their windows closed.

I’m intrigued to see how much Plitvice will impress us in a few days. 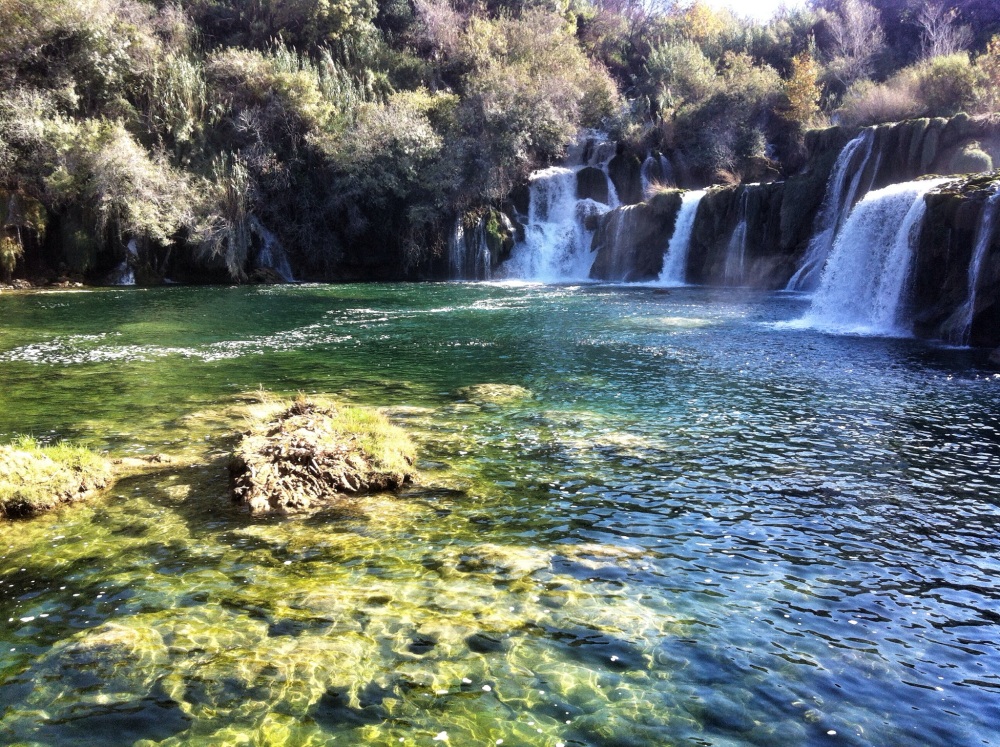