While in Kuusamo I spotted a leaflet advertising watching wild bears from a hide. It was over our budget, but I would LOVE to see these beautiful beasts in their natural environment. I asked a lady about it, as I expected your chances of seeing a bear to be very low. But she said they see them everynight….”because they feed them”. What?! So some bloke, builds a hut in the wild, puts a steak out and charges tourists €120 to see them. As the famous saying goes ‘a fed bear is a dead bear’. Do they feed them all year? Surely they become reliant on the food they provide and in the long run will stop hunting for themselves.

So, alas, as much as we wanted to see a wild bear, and for there to be a 99% guarantee, we didn’t like that they fed them. But, I noticed on the back of the leaflet directions to where the hide was…why thank you. It was about 45km east of Kuusamo, by Kuntijarvi, and only a few kilometres away from Russia. So we decided, heck, we’re on a roadtrip, let’s try our luck.

We didn’t anticipate people actually paying that much money to see a, well, only semi wild bear I suppose if their fed. But our plan sort of went a bit sour as people were at the meeting point when we arrived. Damn. We followed the dirt road up and sussed out the area. Well, bear certainly lived around there, we found a large print of its back and front paws, claws n’all. There were also moose prints and skat all over the place. As we walked further up the track we came to a sign saying ‘Large predator feeding area, no entree without permission’. We’d seen a car come up before hand which was obviously the guides laying out the feast, so we headed back.

As we did, we saw a car had stopped further up the dirt road next to Pablo and a guy was walking around her. We started walking faster, thinking they were trying to break in or something, “you remember the first 3 digits of the number plate, I’ll remember the last”. They got back in the car and drove off. We didn’t see anything unusual once they’d left, obviously I presumed it was Russians trying to steal our tires.

Seeing as people were paying for a guided trip, we didn’t want to ruin their experience so left the area and headed a couple km up the road to a watch tower we’d spotted earlier, in the hope of a truly wild bear or moose encounter.

It was quite the tower; really high, and one side had wooden planks over 1ft apart leading up to the top. I don’t really like standing on normal ladders with a slant against a wall, so heading 15m vertically up was rather daunting. At the top were two of the creakiest chairs imaginable – might as well of had a sign saying ‘we’re up here bears!!’. We had a perfect view over a small lake, marsh and forest. So we sat and waited…and waited. We really had driven to a remote area, slap bang in the middle of a forest supposedly riddled with wildlife, and all we saw was a mouse.

The next day we hiked up a 480m hill and got a view of the vast Russian wilderness. I read that the closest house in Russia was 60km away, I suppose there are more bears than humans in areas like this. At the top of the hill was the standard sprinkling of Finnish generosity; a teepee style hut with a huge fire pit in its centre and wooden seating all around. Outside was a shed full of logs for you to use; imagine hiking here in winter, what a beautiful spot to roast a ‘mallow or two.

We spoke to a lady who said it gets to -35 to -45 degrees in winter, and has snow for 7-8 months of the years. It’s particularly harsh due to it’s proximity to Siberia, which means it also gets scorching summers.

After the hill hike, we decided to grab a long stick and hike around the area where they feed the bears, in our last hope at finding a straggler. It’s funny how we got a bit nervous, feeling like we were walking into a bears home, we weren’t sure whether to talk and warn the bear or be quiet and surprise it. We opted for a whisper but didn’t end up seeing one, of course! Our chances were slim to none really, they can smell you up to 5km away, and are afraid of humans so will try their best to avoid you.

A while back I read that if it wasn’t for Finland having a border with Russia, they wouldn’t have any bears left. But alas, they still hunt, and it all kicks off in a weeks time. Supposedly when the bears hear the first gunshot they head to no-mans land between the border where it’s safest (basically right where we were). But hunters clearly know the bears are fed there, the bears will turn up expecting their usual meat delights and meet a bullet instead… Head to Russia my bear friends, for animals, unlike humans, are much safer there.

As we didn’t see any bears, we decided to pay a reasonable €10 to visit the ‘Large Carnivore center’ south of Kuusamo. It’s a sort of orphanage for wild animals, and started up in 1994 after two cubs were rescued at a research centre, tagging and collecting data from wildlife. When the company moved elsewhere, the cubs couldn’t go back into the wild so they decided they should be put down. The man looking after them refused and set up the company.

It’s now home to 6 brown bears, lynx, wolf, and reindeer. We were led around the large enclosures by a blond (of course) local lady. She did the whole tour in Finnish for the rest of the group and then translated a few bits for us and answered our questions at the end.

The bears were beautiful! The guide handed them treats, which they clearly adored; poking their snouts through the fence, with their lower lip drooping down. One huge father bear continuously flapped his tongue between the fence at us, it was unbelievable long. They were very human like actually, the son of Mr. Licky, rested his arm on a ledge, and munched on a carrot, it slipped out of his paw and fell onto the other side of the fence. Without looking he creeped his giant paw under the fence towards us and patted the area, once he found the carrot he used his long claws to scrape it up, and resumed munching.

The last bear we met was Juuso, said to be the largest in Finland at nearly 500kg. The others were big, but this one, wow – was more like a grizzly! He was pretty lazy though, just laid down and rested his face on the fence. The guide put a plum in her mouth and he gave her a big lick and gently took the fruit – and then he spat the stone out afterwards. Now he would scare me in the wild, but he’s been brought up by humans and looked like a giant teddy bear, infact, I wondered if he was obese, he was constantly out of breath and wheezing like a fat man.

We only heard a few stories about how the bears got here; one’s mother was hit by a car, another ones mum was shot inside its den, so they rescued the cub otherwise it would have died, this happened in spring hunting season which they have since stopped. She also told us when the cubs are born in the den, they are blind and furless and can fit into your hand. Now that’s an easy birth!

I was taking some photos of a bear walking past when it suddenly thumped its front paws down infront of me. I liked to think it was just hunting a mouse, but I’m pretty sure he wasn’t a fan of me and that was his way of saying ‘unless ya’ got food for me, fuck off!’. 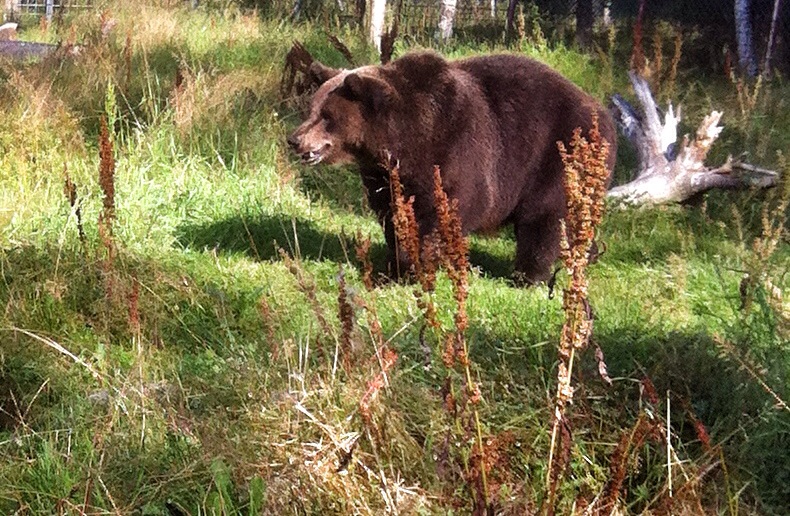