We made it over to Calais successfully, for the first time in all our road trips we have a satnav, so we got it up and running when we arrived and it led us onto a wide, quiet motorway with hardly anyone on it. It was perfect for Craig to get used to driving on the right, weirdly they didn’t have lampposts or cats eyes so it was pitch black. After about 20 miles we found a rest area (Aires in French) to stay at so pulled over and climbed into the bed which we’d set up back in Dover. It was so comfortable we were really chuffed, plus my curtains blocked almost all the lights out.

Even though there was a designated area for trucks some lovely(!!) chap in a freezer truck took up a load of spaces and parked his front right next to us so we had the hum of his freezer all night – it was so loud it sounded like an idle engine running. We set off east to St.Omer where we stopped to do a food shop – or shall I say spend over an hour gawping at all the food. The place was massive, with a big cheese and meat counter and bread baked fresh. We went very French and got a baguette, pain au chocolat and some revolting dehydrated olives that tasted like Heston bluemental had managed to make pure salt into a realistic shrivelled up olive that you had to fight to get from the stone.

The drive we did through France was more or a means to an end to get us to Germany as there wasn’t many attractions en route. But we were in a foreign country so we found it interesting just driving through villages and seeing how different the architecture was from the UK. For example the houses all have shutters, the older ones with pretty wooden ones painted nice colours, but the newer houses have a metal roller shutter, so when you drive through towns it looks like everyone’s packed up and left and you feel like your driving through a ghost town. We pulled over in a lay-by one evening and across the road was a building so Craig checked it out seeing if it was a toilet block but came back saying it was a closed down discotheque. After we made dinner and were about to get ready for bed a car pulled up into the disco carpark, then another one did. So there’s me, the detective, summing up that it must be a mafia meeting place. But then more cars turned up, and before our eyes over 10 cars pulled up and then some tacky fluro lights came on around the entrance way – we were so shocked that a) it was actually still a business b) people drove out here into the middle of nowhere for it and c) they use the word discotheque, how very 80’s.

The further east we went the prettier the scenery became. Just farmers fields everywhere and nice quite roads. We visited Reims and Epernay the home of champagne where supposedly over 200 million bottles are ageing in the caves (cellars) below the town, the area was pretty with vineyards lapping up the sunshine.

The French were all very polite but only one person spoke English to us since arriving, even though I was courteously speaking French to them…”Bonjooourno!” “Par lay vou ang lay?” ” wiv your Ferreto Rocher you are truly spoiling us…”. It did amaze me how some people speak no English, I walked out of a supermarket without buying anything and the checkout lady tried to tell me to use the exit about a mile along the store… Oh I knew what she was saying alright so I put my confused face on and she gave up and shooed me along in French, it can have its benefits!

We visited Metz which had a beautiful historic quarter with tall yellow stone buildings and wooden shutters. There was a large open square dominated by a cathedral and lined with cafés. And sweet cobbled lanes with artisan bakery’s and patisseries with glistening cakes on display led in all directions. We went to the mârché couvert which had cheese galore, fresh veg and fruit, pasta and all sorts of meats including cow tongue mmm.

We wanted to at least visit a park in France so we drove south to Ballons Des Vosges, it made a wonderful change from fields to thick pine forested slopes. We did a couple of short walks and managed to fill up the shower with lake water and let it heat a little in the sun. The road climbed to about 1130 meters and then started winding its way back down, the views across the valley were amazing, lush green with pockets of forests and big traditional alpine style houses dotted around.

The next day we went to Colmar, we headed straight for the old town which was incredible! It was a surprisingly large area of perfectly preserved half timbered buildings. They all varied in pastel colours but had the bold dark wood patterns imbedded in the walls, all with colourful wooden shutters. We wondered along the cobbled roads and I couldn’t put my camera down as every turn seemed to offer an even more impressive view. Some buildings had dates written on them as far back as the 1300’s and had overhanging sections precariously leaning over the lane ways and people walking below. As if I didn’t like the place enough there was even a ‘Petit Venice’ where shallow canals meandered under bridges which had baskets full of blooming flowers in them and by far the best views of the historic buildings. One of the pettiest cities I’ve ever been too.

After Colmar it was time for Germany! I’ve been ridiculously excited about this as we’ve met a lot of Germans along our travels and they have to be the funniest people, they have a great sense of humour, plus from the little research I’ve done it’s got lots of spectacular scenery to offer. We headed straight for the Black Forest, as we left Freiburg and headed east a silhouette of dark mountains rose ahead of us and before we knew it we were climbing high. It’s not quite what I expected, really dense dark forest like in little red riding hood, dark and creepy, but it’s actually more like pine forest coating the hills and below are deep valleys of lush green fields being grazed by pretty cows and massive houses! They are just insanely huge, with massive roofs dominating the house in a big wide upside down V shape, they are basically mansions but a world apart from the ones in England, these are German mansions and bloody impressive too. One we passed was right by the road and incredibly old that I almost expected it to creek as lorries drove past. It’s whole upper section was covered in minuscule circle tiles like snake skin, it was about 6+ stories high, but it looked like only the first 3 were used with wooden balconies draped around the 2nd and 3rd floors. It was a giant cuckoo house! It even had a tiny wooden shutter at the top where I’m sure a bird pops out on the hour and shouts across at the neighbour in the tiny house “GET JEALOUS FUCKER!!!” We drove into Triberg which after Colmar was a big disappointment with no nice buildings, however it is famous for being the home to the worlds smallest and largest cuckoo clocks…wowee! And more importantly home to the original Black Forest cake recipe which we indulged in at a cafe. The town was more just for tourists with tacky souvenir shops and of course lots of cuckoo clocks as that is what the Black Forest is most known for. Craig being a fan of woodcarving and making me lots or unique earrings was fascinated watching the carvers at work. An original piece we saw, all handcrafted with a whole hunting scene carved into it and over 1meter in height was for sale at €5400! Ouch. Much to Craig’s disproval I loved the cheesier ones with a little scene at the bottom with a cow being milked or a lumberjack chopping wood, as on the hour they all got to work as a bird came out chirping and people turned around the top balcony. Looking forward now to more quaint villages and heading south in between the German and Austrian alps. 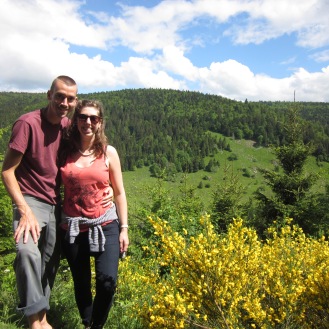 Hiking in the Vosges, France 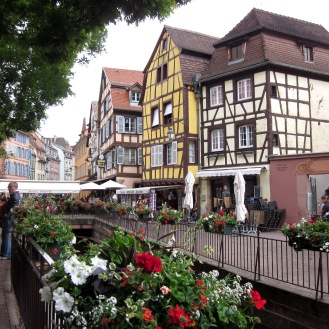