We crossed the border into Ireland on a rainy day, which seemed rather fitting considering it’s said to rain 225 days a year. We were now in Europe which meant we were on the Euro but other than that we didn’t notice too many differences with the UK…but they really seemed to like their arcades as we drove past lots of them. We had to drive through a few big towns which was rather stressful in the traffic but eventually we were on quiet country roads heading towards Glenveagh National Park. One thing we were a little sad to notice was rubbish in every single pull out.

When we arrived at the national park we followed a path to the visitor centre which was lined with Halloween decorations. It was just a few days after Halloween but they really seemed to take it seriously here. Inside there were more Halloween displays and information plaques about Halloween in Ireland. Apparently the tradition started here…it was to do with a guy who people called ‘Stingy Jack’ who offered to buy the Devil a drink…but he was stingy so he never intended to pay for it. Instead he convinced the Devil to to turn himself into a coin which he would use to pay for the drinks with but instead of paying for them he kept the coin in his pocket with a silver cross next to it which prevented the Devil from changing back to his original form. Jack eventually freed the Devil with the agreement that he wouldn’t bother him for a year and couldn’t claim his soul. He fooled the Devil once more with another trick so when Jack eventually died God wouldn’t allow him into heaven due to his cruel behaviour. The Devil kept to his word and didn’t claim Jacks soul, but he also didn’t allow him into hell. So Jack was left in the darkness between the two, with just a burning coal to light his way. Jack put the coal into a carved-out turnip and has been walking through the darkness ever since. The Irish began to carve scary faces into turnips and potato’s and put them on their windowsills to keep Stingy Jack away. When the Irish took the tradition of Halloween over to America they looked at their carved turnips and in a typical American way said they needed a bigger version. So like the oversized meals at McDonald’s the little carved turnips soon became large pumpkins. 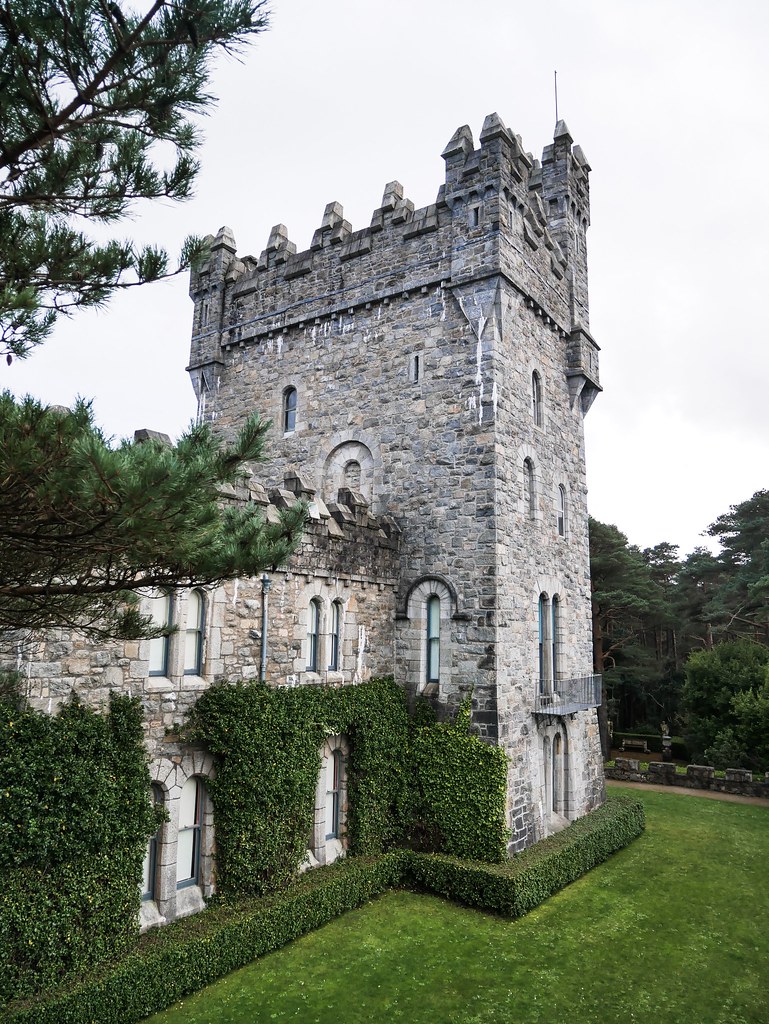 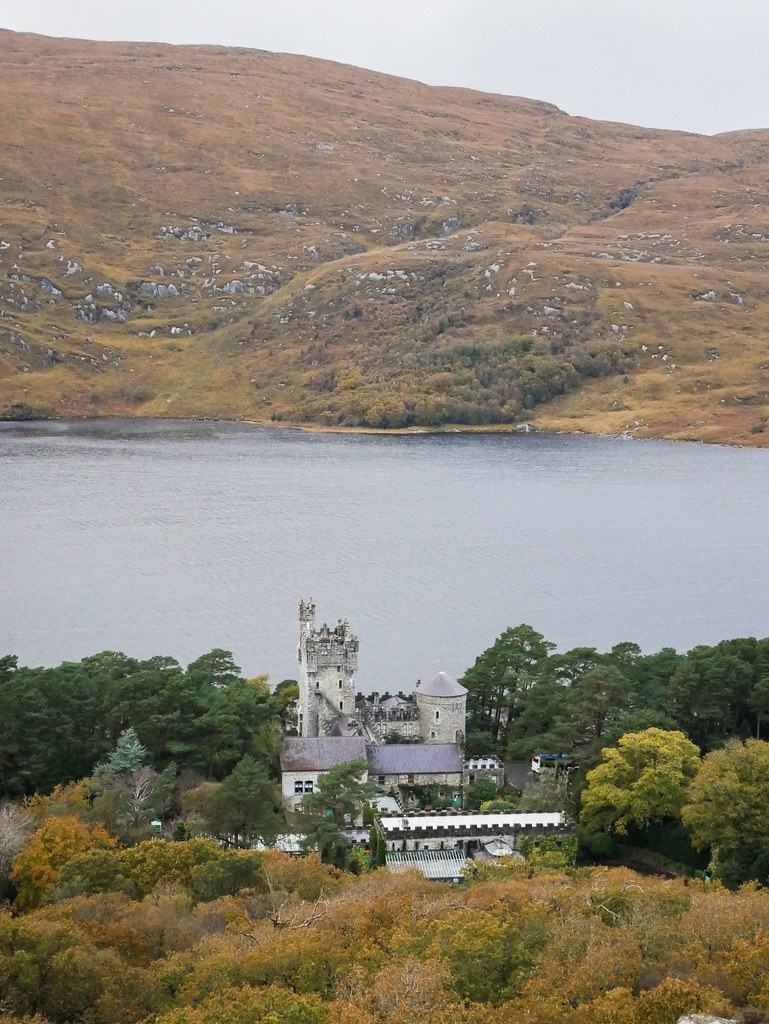 We found out the weather was due to be awful the next day with 50mph winds and heavy rain so we decided to do a quick hike to Glenveagh Castle on the shores of Lough Veagh before the weather turned bad. The route to the lake led us past skeletons hanging from trees, carved turnips and ghostly figures swaying in the wind. It was a well built, flat trail all the way to the castle and from there we headed up hill to get a view of the area. It was a bit drizzly and hazy so the views weren’t great but at least it got us out in nature.

We decided to stay put in the carpark the next day, the wind was howling high above us but we were well protected so it seemed silly to leave. We discovered the visitor centre had a whole section round the back with exhibitions. There was a lot of information about the flora and fauna in the park and also the history. They had some interactive things for kids and one had something about putting your hand in a dark hole to touch some guy who used to rob people around this area. Apparently the ghost of him has been witnessed inside the visitor centre and in the area. As we got back to Helga we spotted a deer right outside our van, nibbling on grass in the forest. After seeing the deer and reading about a ghost that likes to hang out in the area I told Craig there wasn’t a chance I was going outside for a wee tonight.

We woke early the next day, super early in fact because we’ve changed our clocks. They went back in the beginning of November and we hated it, if we had a lie in we’d miss the sunrise and the sunset happened way too early at 4:45pm. Sure we could wake up earlier but that would be changing our whole day, eating our meals earlier…afternoon tea at 2 instead of 3…it sounded awful. Plus just seeing 6am on my alarm makes me feel tired no matter how much sleep I’ve had. So it was decided, we’d keep our clocks on summer time, hooray. 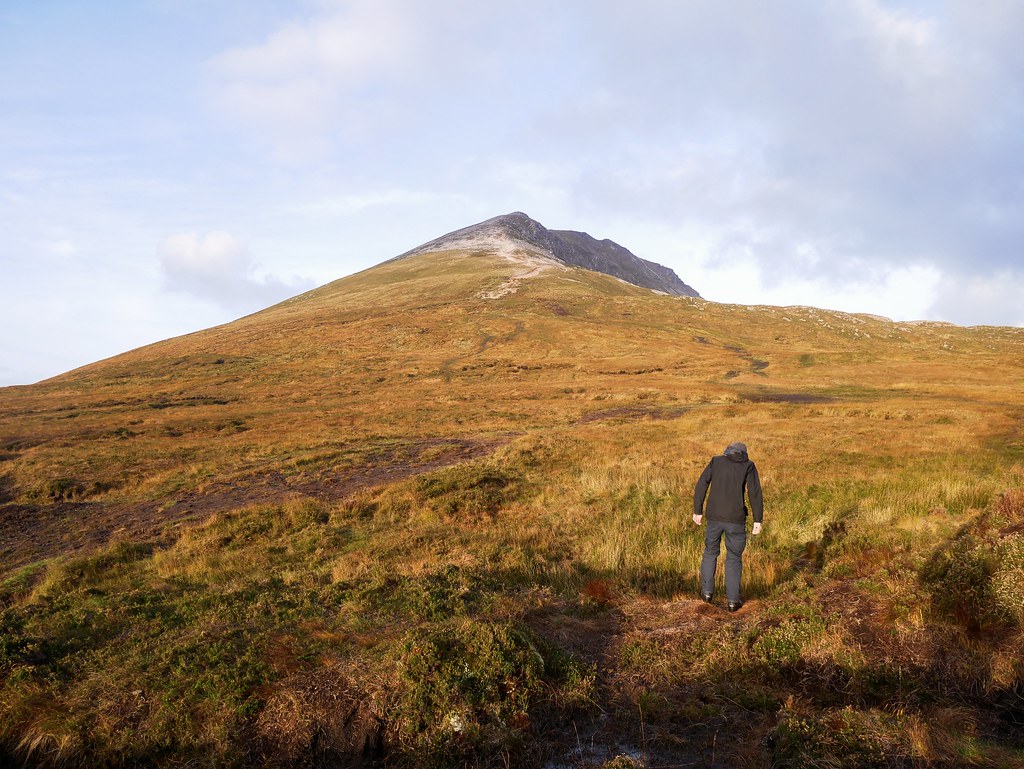 We set off by about 8:30am (our time) and drove up the road to the start of a hike up Mount Errigal. We were rather surprised to see three cars were there before us!! It was nice weather though and a Sunday so I guess people were making the most of it. The pathway was hilarious. It started off as a paved track about a meter and a half wide, but it came to a grinding halt after just 20 meters and turned into a mud pit, so deep in areas that you could lose a small child in it. It was an absolute mess to walk through but after awhile the trail dried out and we were soon hiking up the rocky slopes towards the 751m top. There was a haziness to the air today so the views weren’t crisp but it was still a very pretty sight from the summit. There were lots of hills around us and a little lake nestled beneath a mountain. There was a nice narrow ridge to walk along, but not narrow enough to be scary and we were soon joined on the summit by two men in their 70s, they’d only gone and run up the goddam mountain! It’s probably something they do daily, a casual morning jog to them…but there’s me thinking of all the lose rocks we’d just hiked over and the chances of them having osteoporosis, falling and breaking every bone like a glass hitting the floor. 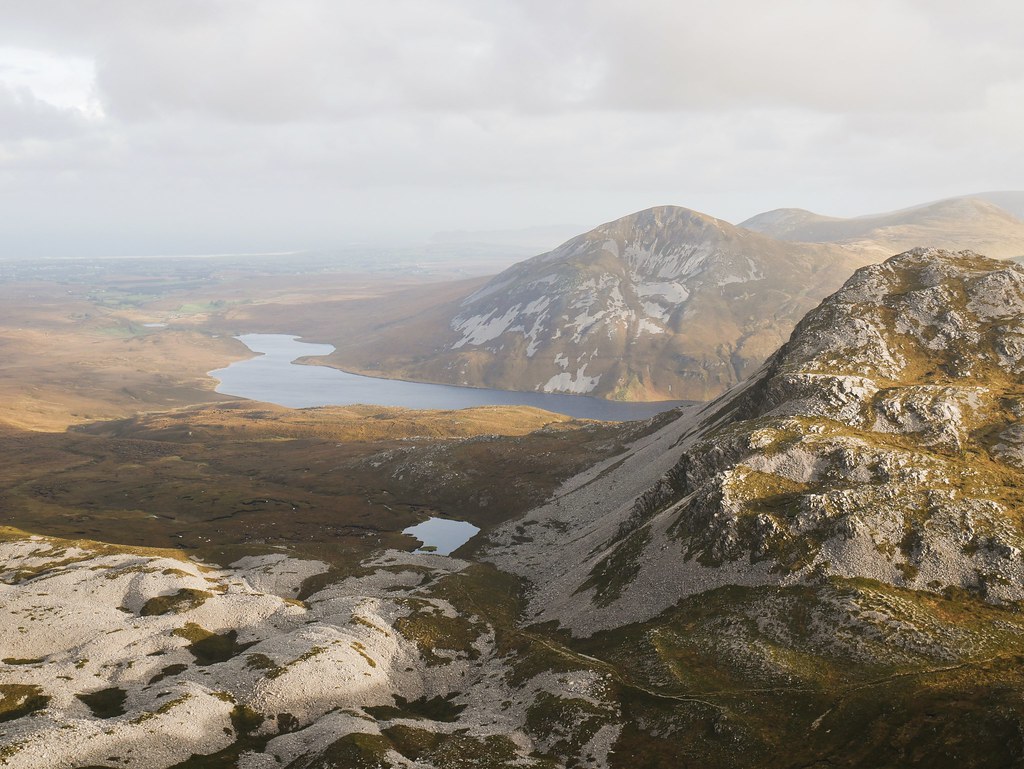 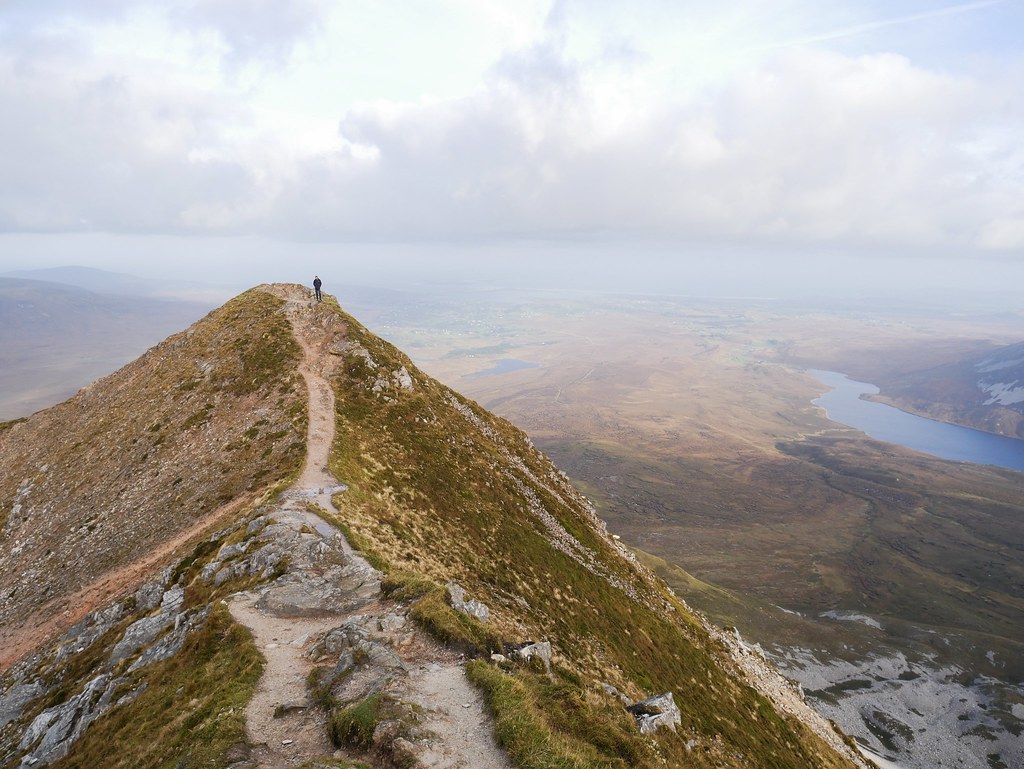 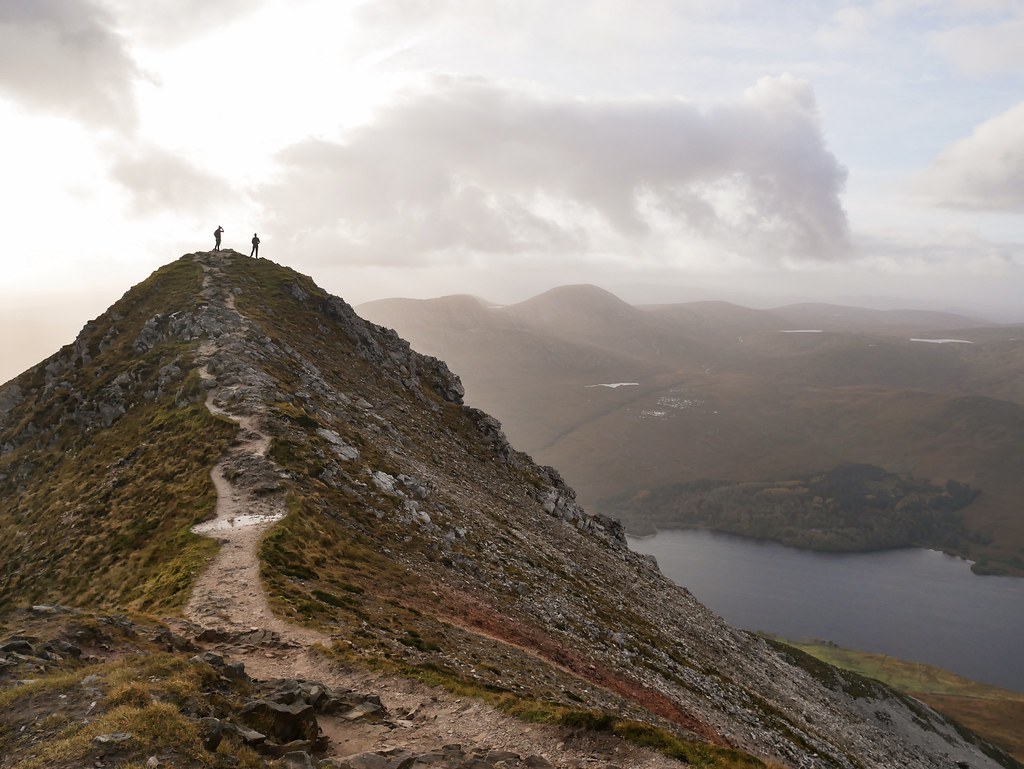 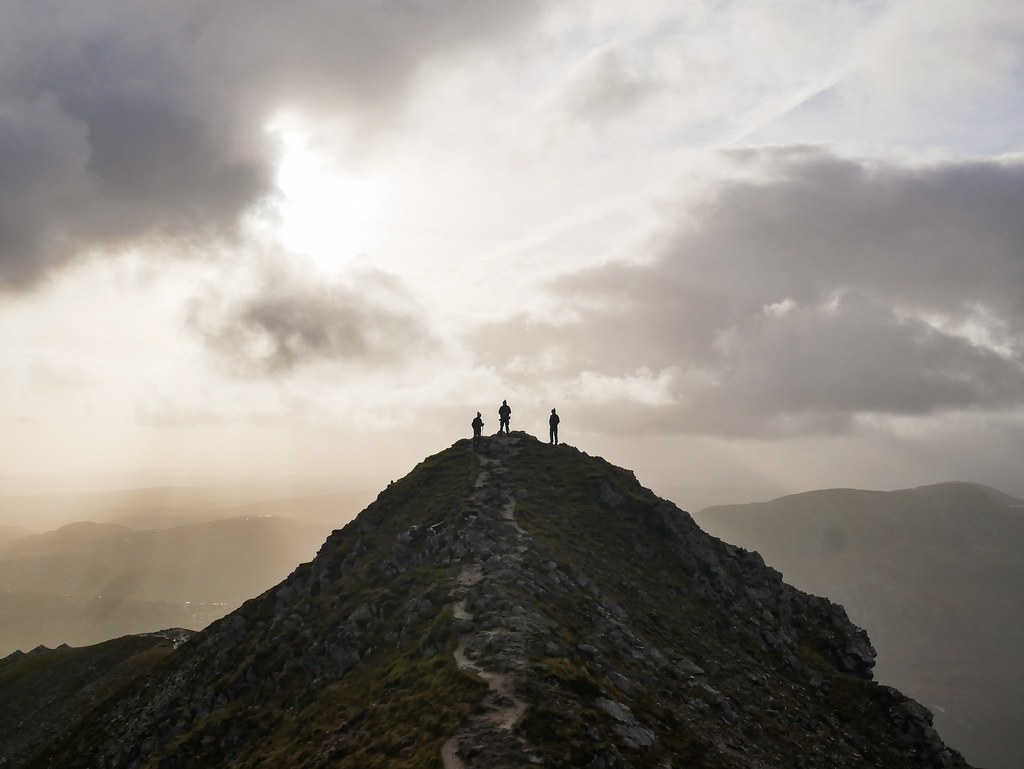 As we made our way down one of the jolly old men stopped for a chat and recommended a few places for us to visit. The Irish speak so damn fast and he had such a strong accent that I must’ve had a completely blank face, trying to figure out the directions he was rapidly giving us. I wrote a quick jumble of words on my phone and when I got back to Helga I tried to look for similar words on my map. Well, I found the place eventually, it was Mullaghderg Beach. 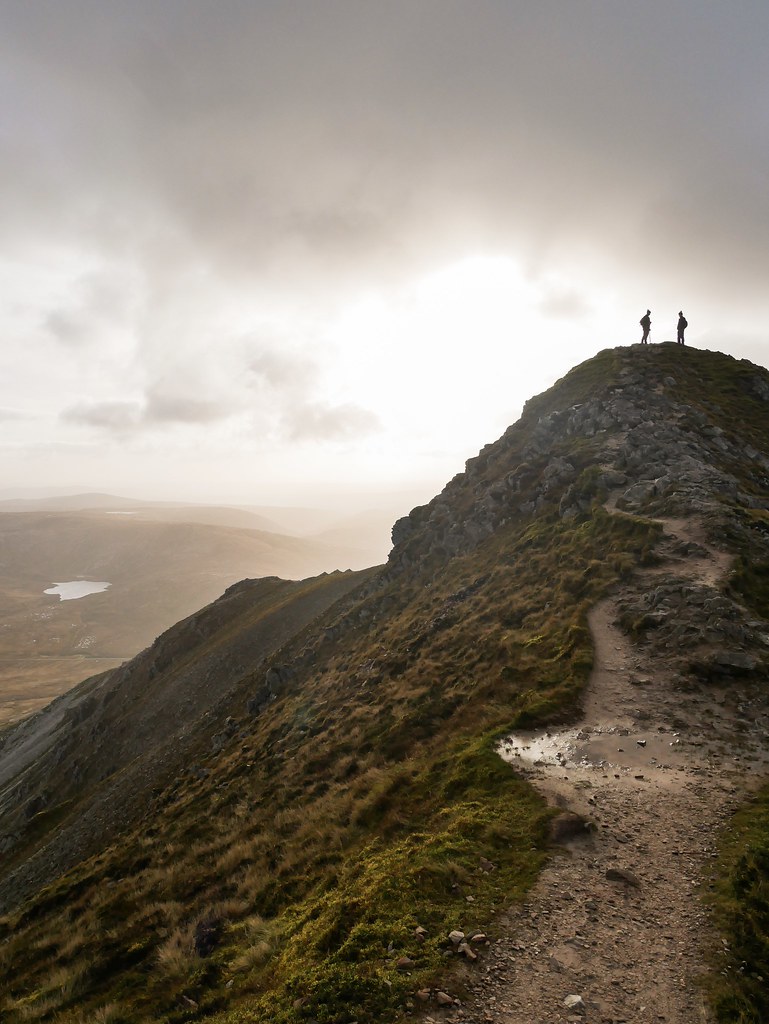 Before we headed to the beach we had to get down through the obstacle course – aka the mud pit. This time however we took a faint sheep track down which was wet in areas but way quicker progress than mud suctioning around my welly’s on every step. A short drive up the road gave us the best view of Mount Errigal with a lake in front of it. There was a minuscule island on the lake, barely above the water and just enough dry land to keep two lovely trees alive. They almost looked like big bonsai trees, maybe that’s an oxymoron as bonsai trees are basically mini trees? 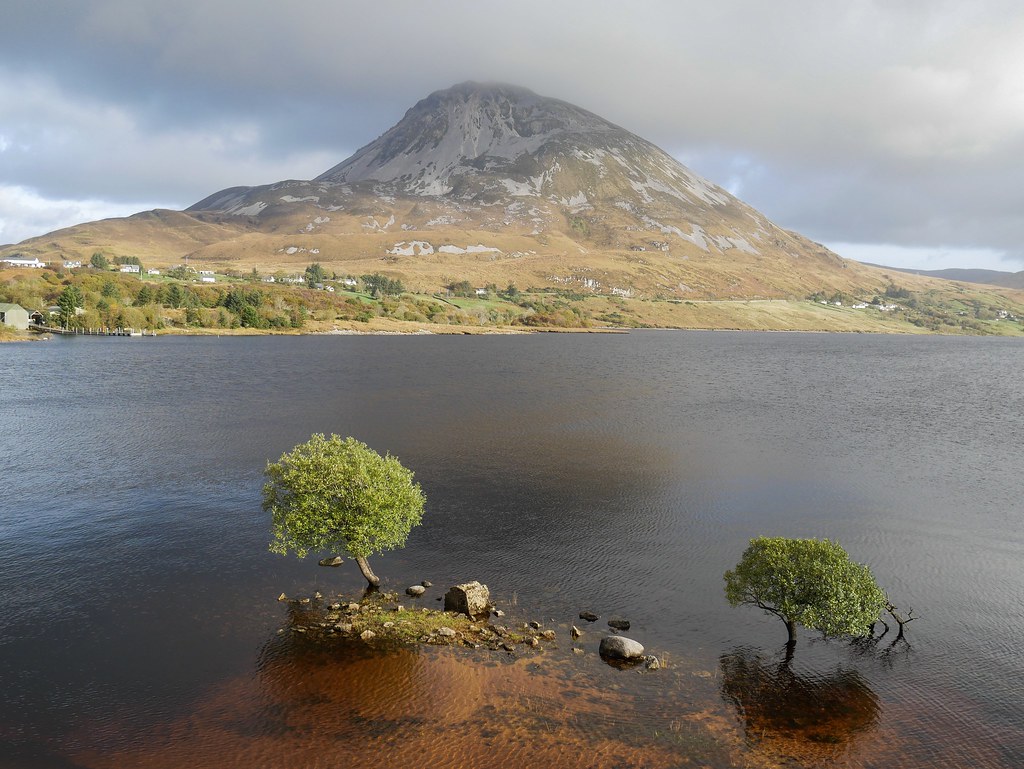 Anyway, after a spot of lunch by the lake we drove to Mullaghderg. It was our first time on the west coast of Ireland and I was envisioning this beach being a tranquil little bay…oh how I was wrong. As we drove into the gravel car park we got a glimpse of the beach, it was WILD. The sea looked like the aftermath of a washing machine spinning at full speed. There were waves upon waves, crashing into one another and creating 30ft walls of water as they smashed into the headland. A calm bay would of been nice but this was extra special. We wasted no time and headed out on a walk along the sandy beach. There was an excess of sea foam from the waves and we watched as blobs of foam glided across the wet sand. 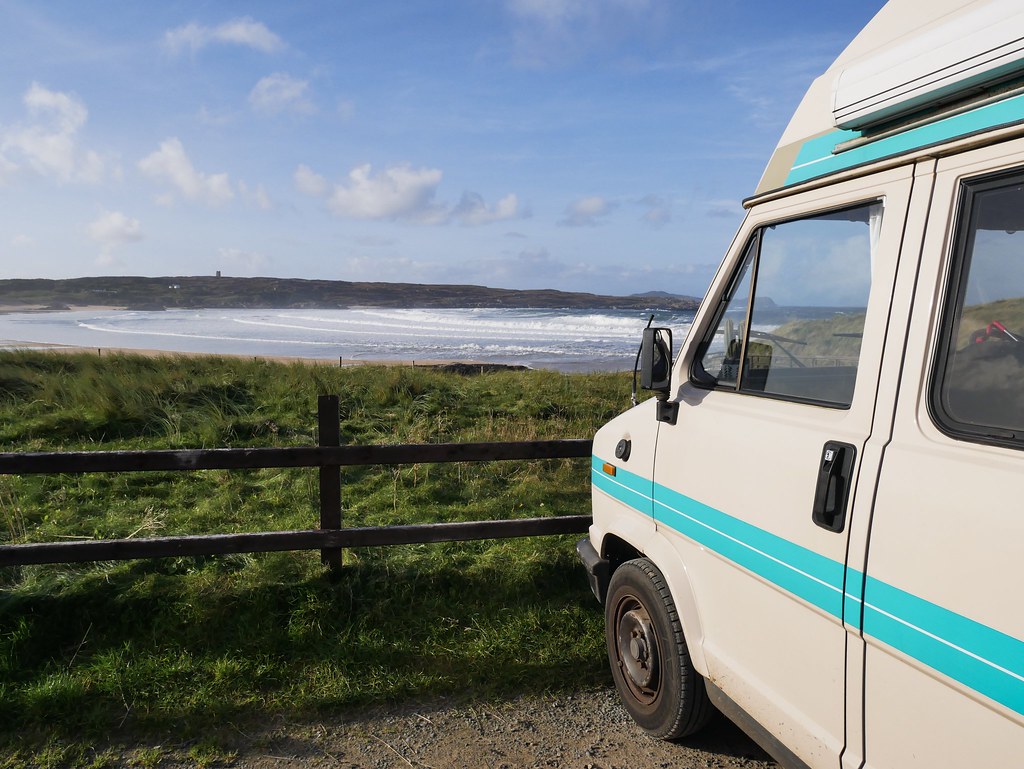 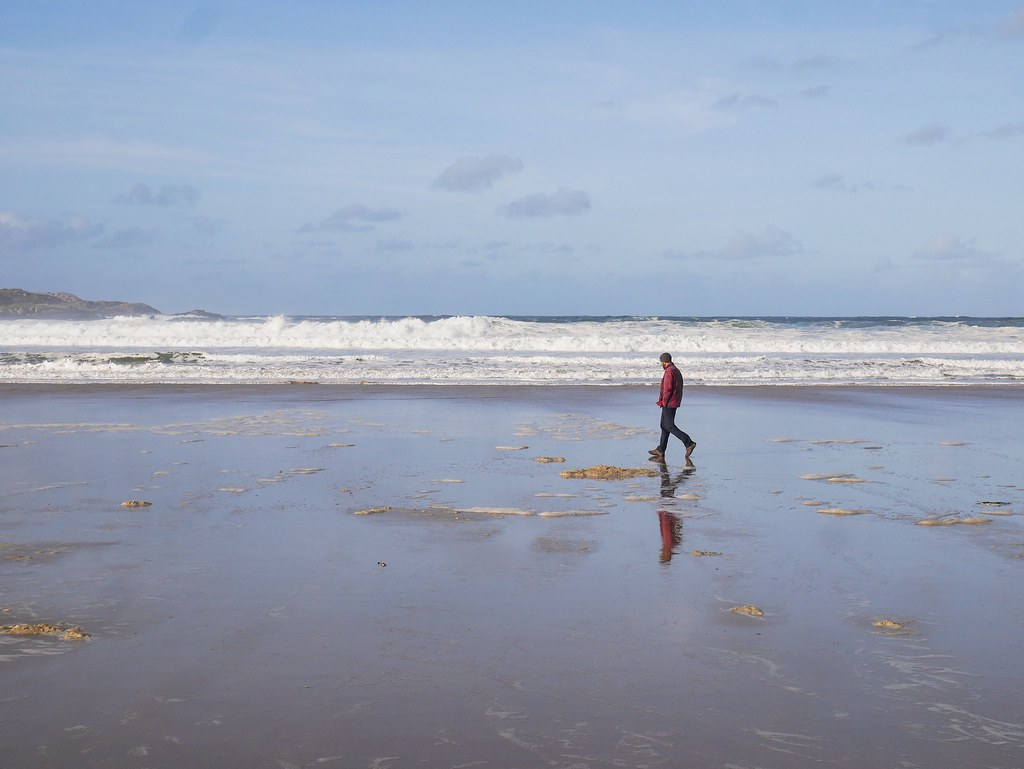 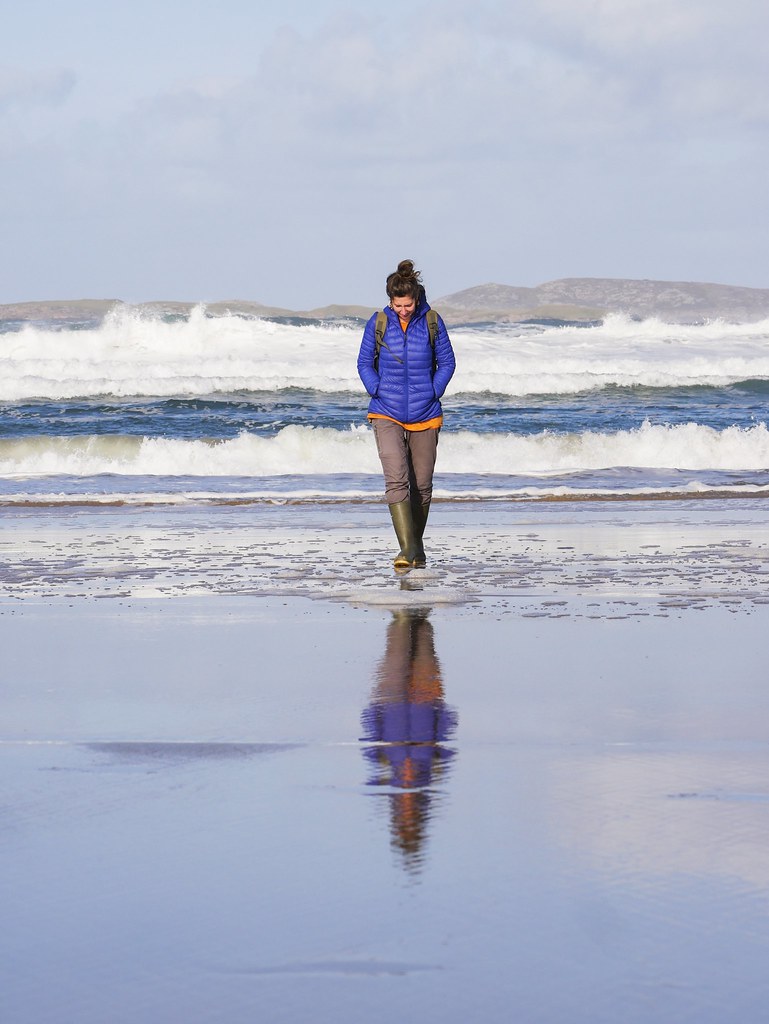 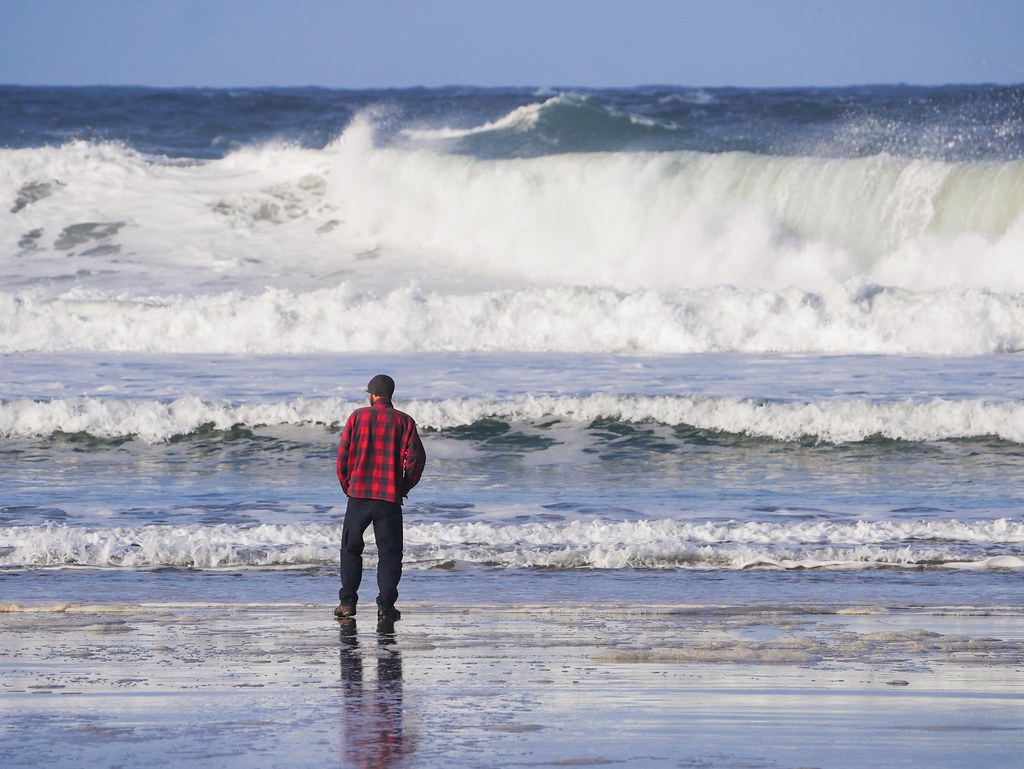 We passed a local and had a quick chat, he recommended we walk across the headland by the carpark and told us about a memorial for some children who found a washed up land mine and were killed by it. Before we went over there we continued on our route along the beach, eventually climbing over seaweed covered rocks and along precarious grassy slopes beside barbed wire fences. I wasn’t enjoying this part of the walk at all, mainly because whenever we had to go near the sea and walk over rocks Craig would say “hurry a waves coming in!!” and it just made me so stressed as I couldn’t move any quicker without slipping on the seaweed. So we ended up headed back to the main beach and up the headland where the local suggested going. 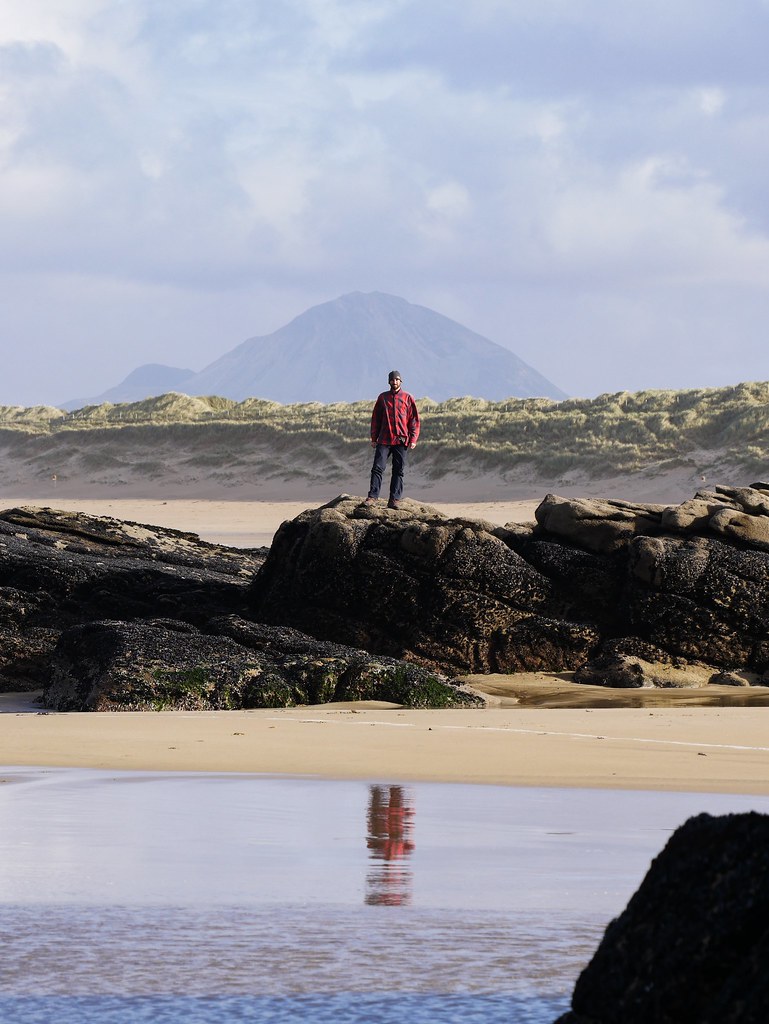 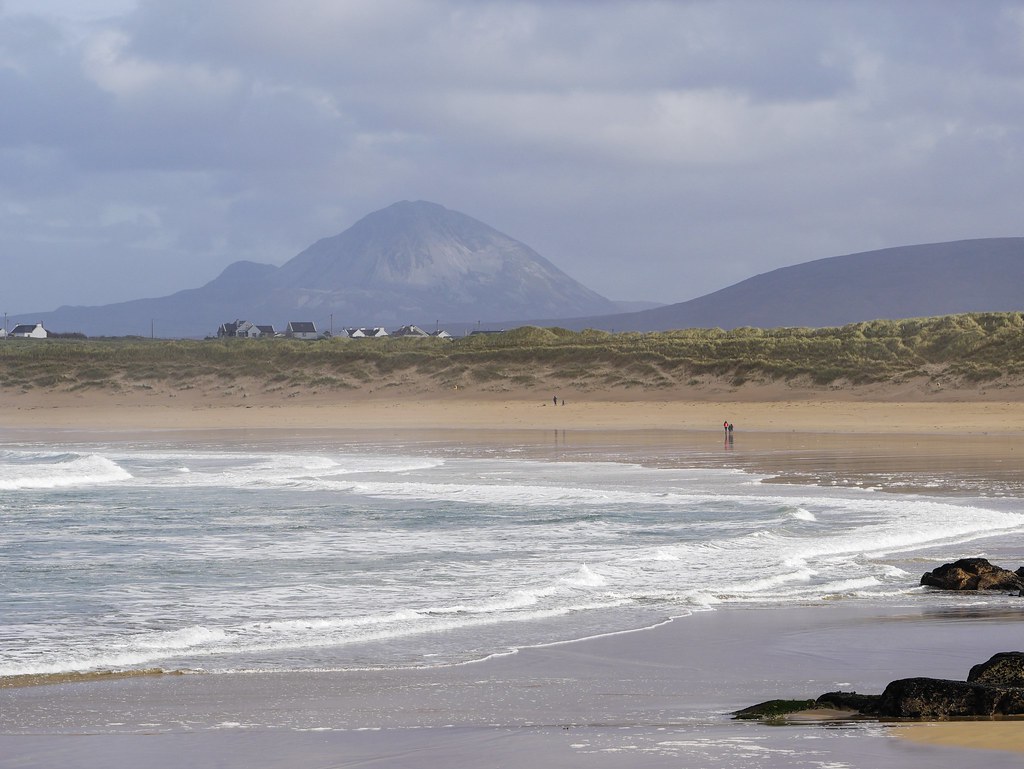 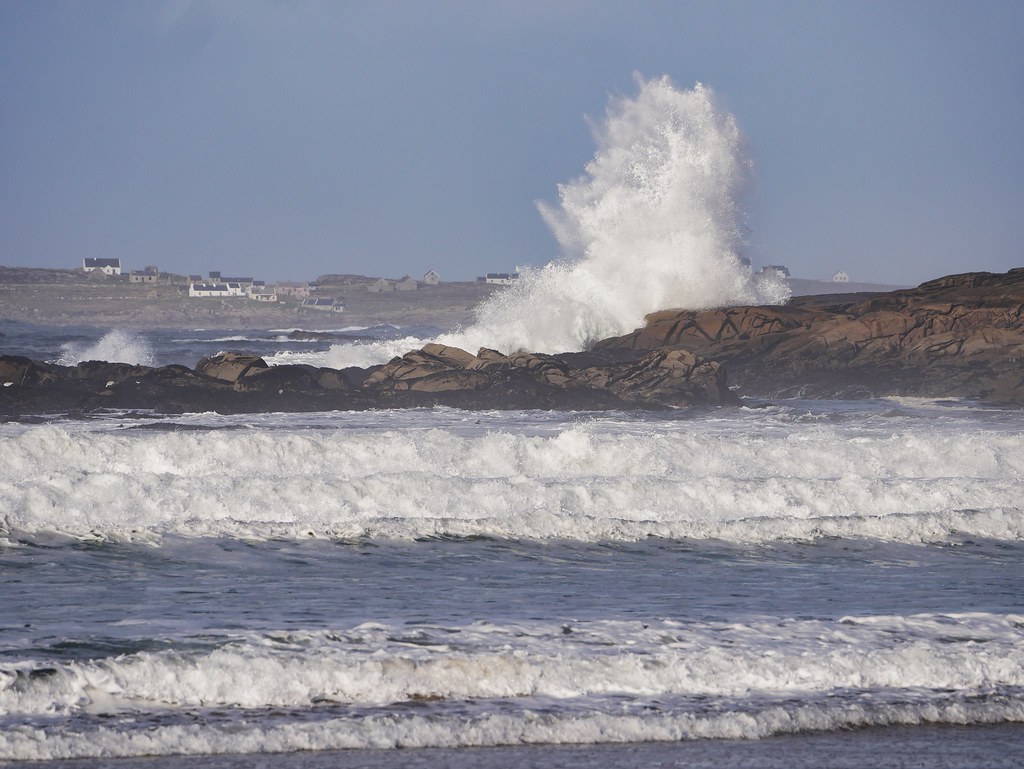 We took a flask of tea and some cake so we could sit down and enjoy the wild waves. It was the best spot to watch them crash into the rocky wall and shoot up like a fireworks. Craig was like a kid, standing as close as he could without it being dangerous while I was like a mum, 40 meters back. To be fair I was trying to take photos of him and the waves while avoiding the vast amounts of sea mist that were coming off each wave. It was unavoidable though and after an hour of gawping at the waves we were as salty as a bag of chips. 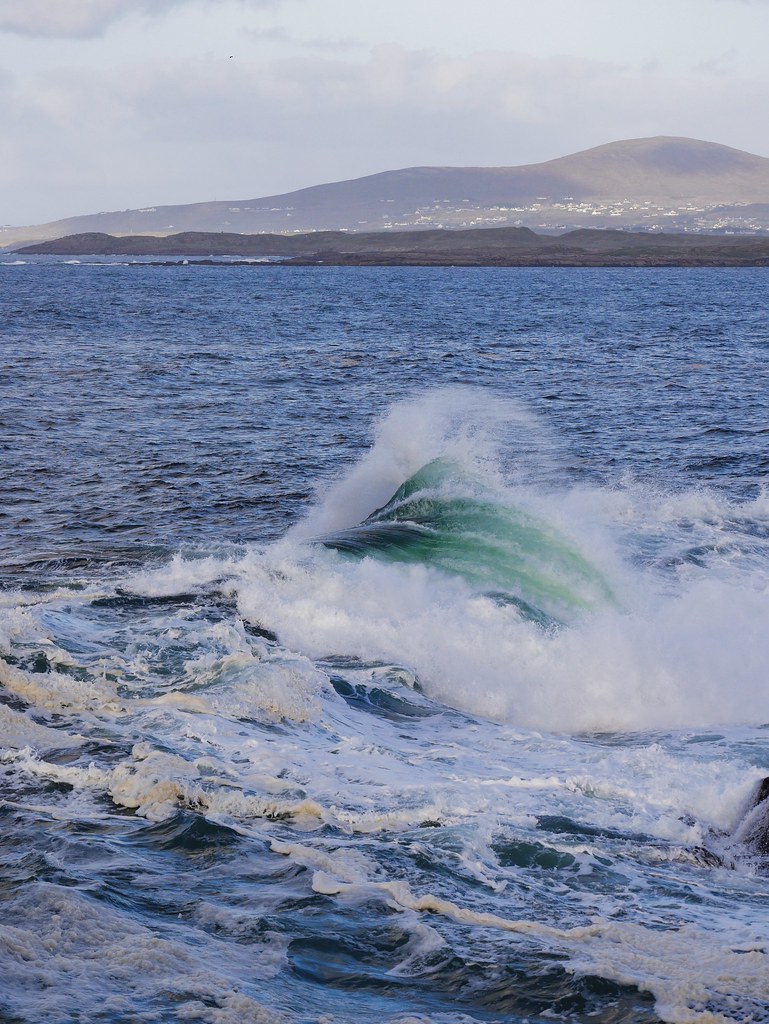 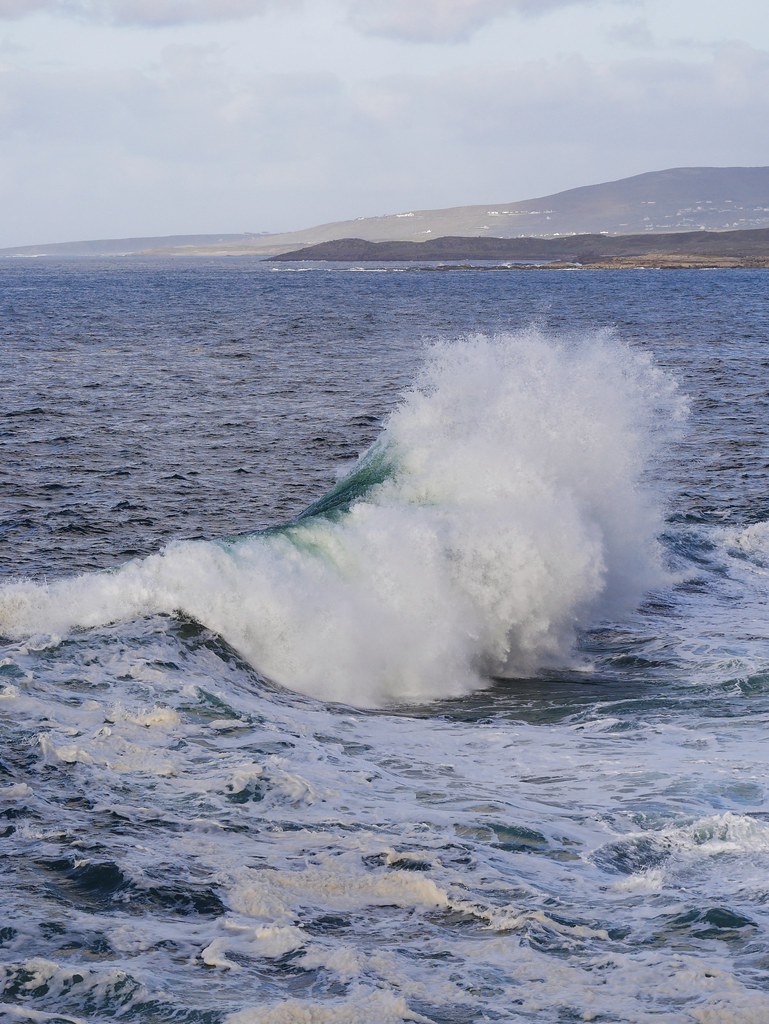 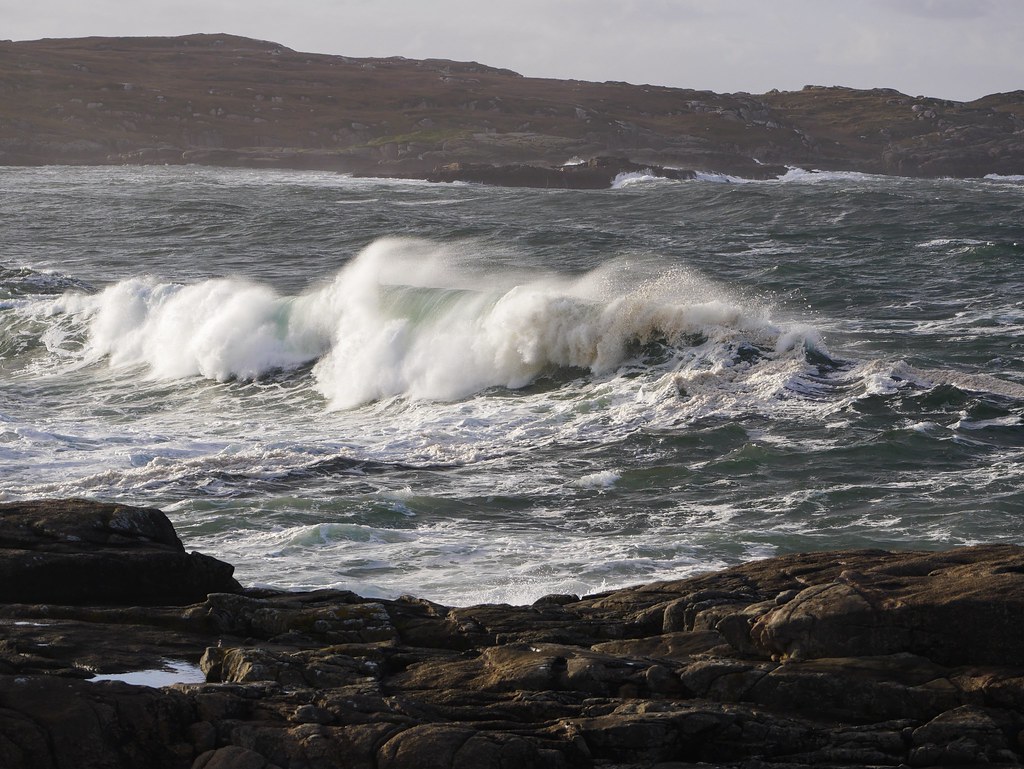 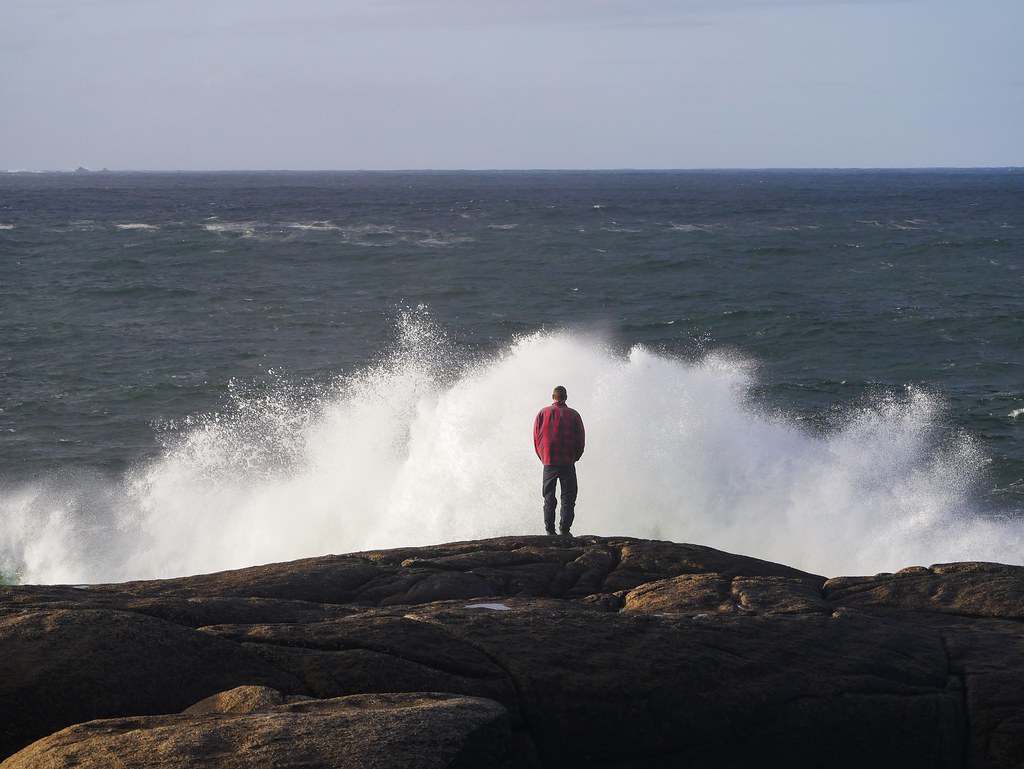 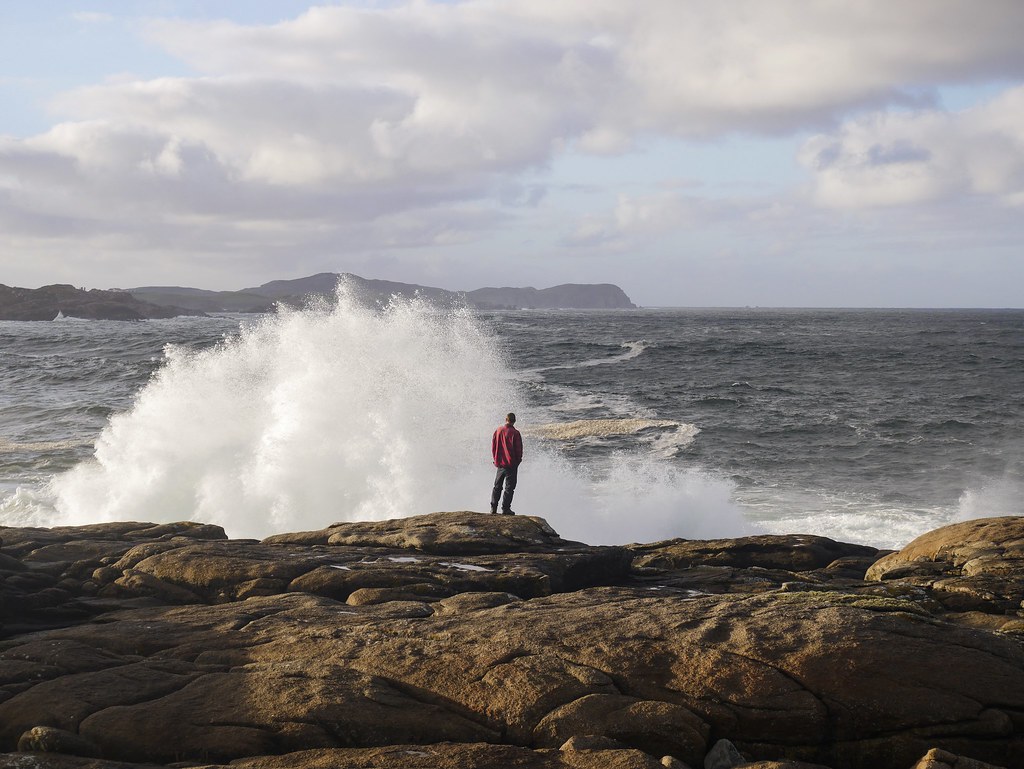 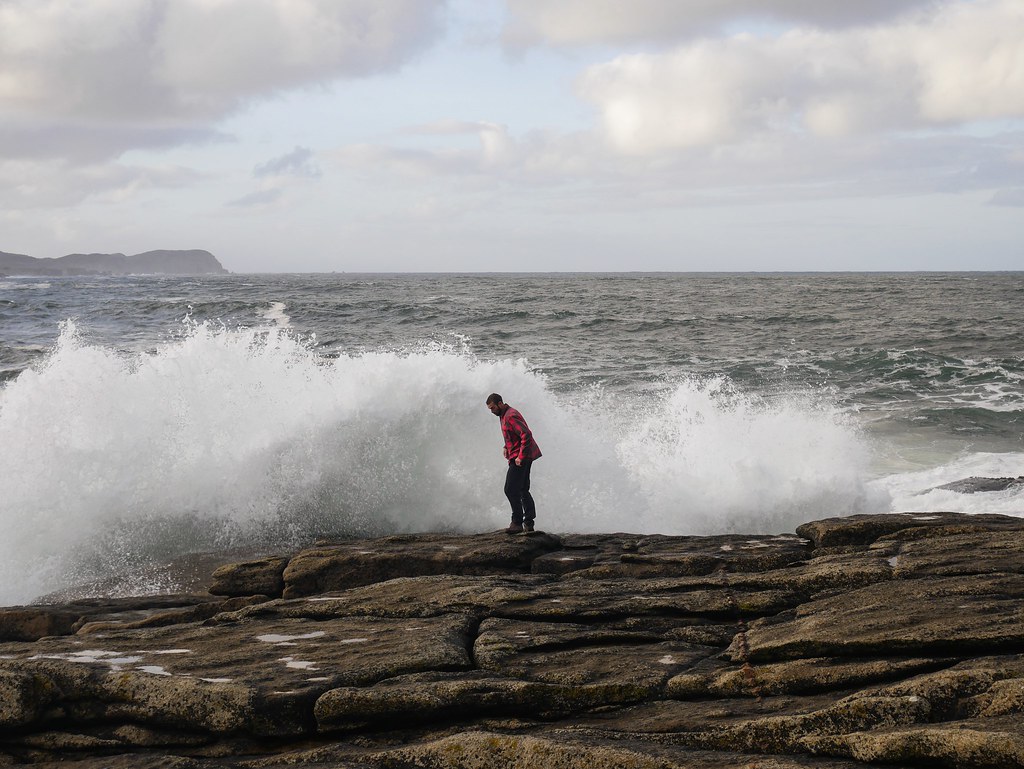 We headed back to Helga and had a shower before watching a surfer head out at dusk. It seemed absolutely crazy to go out in that rough sea and to be fair I think he must’ve been thinking the same thing as he made absolutely no progress. We didn’t see him ride a single wave, he was just trying to battle his way through the whitewash the whole time. 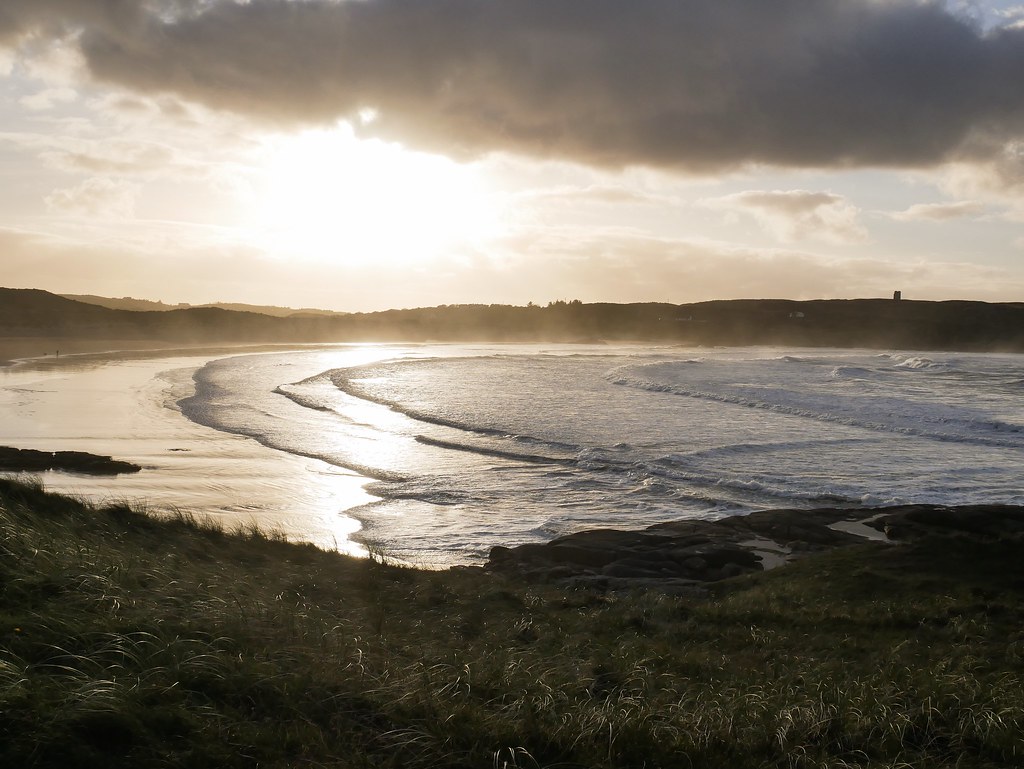