On the 4th of August 2008, Craig and I embarked on what we said would be a couple of years (if we were lucky) travelling the world. Starting in Australia, we got a serious case of the travel bug epidemic – it appears to be incurable, and the only way to ease the symptoms is to continue travelling the world together.

We’ve now visited 31 countries (over 40 once we finish our Europe roadtrip), but there’s still a lot more on our list.

We’ve managed to only work a total of 2 years and 4 months in the whole 6 years – now that’s odds I like!! Yes we’re budget conscious, and we don’t go out on the piss every night like most backpackers, but when we work, we work hard and save a lot. We travel cheaply by buying a camper van and selling it on after we’ve explored a country with it.

When we’re backpacking in third world countries we travel like the locals, we sit in tin saunas with such little space that even a 3 year olds legs would be squished against the seat infront. But we still do what we like, we skydive, we scuba dive we go on animal safaris…luckily we like doing as much as possible on our own and don’t enjoy tours with groups of people, so that saves us money!

And it’s funny, because we don’t have wealthy backgrounds, we haven’t been given money, we’ve saved every penny ourselves. It really makes me wonder why more people don’t live like this.

Taking that first step and going to Australia has been the best decision we’ve ever made. I’ve learnt a lot about the world, and I can’t believe how much I’ve changed – I used to want to be a fashion designer, and now I wear such tatty clothes and would love to work as a wildlife ranger/researcher, with Orangutans in Borneo or whales in Alaska. If someone asked me to go on a hike 6 years ago, I’d laugh, what the hell would I want to do that for?! But now I love hiking, i’ve become quite the country girl.

Other than the obvious – missing family and friends, another problem of travelling for a long period of time is taking things for granted; hiking to a waterfall and saying “I’ve seen better…”, canyons “it’s not quite ‘Grand Canyon'”, mountains “ain’t got nothin’ on the Himalayas!” Etc. So yes we have gotten used to being surrounded by incredible views and sometimes we say to each other “do you realise how lucky we are, JUST LOOK AROUND!!”. But this Europe trip proves that our jaws can still hang low….seriously breathtaking scenery – if anything, the best we’ve seen so far!

Here’s to hopefully many more years exploring the world together, getting off the beaten track and more close encounters with wildlife. HERE, HERE!! 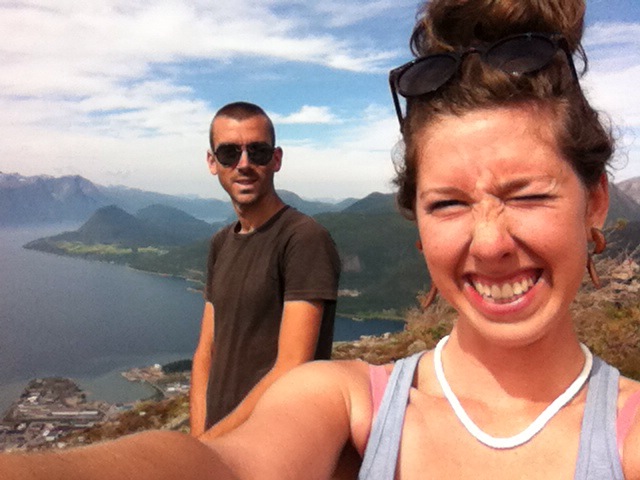